Home ‣ Fashion ‣ Women in Ancient Egypt: How They Dressed and Styled

Women in Ancient Egypt: How They Dressed and Styled 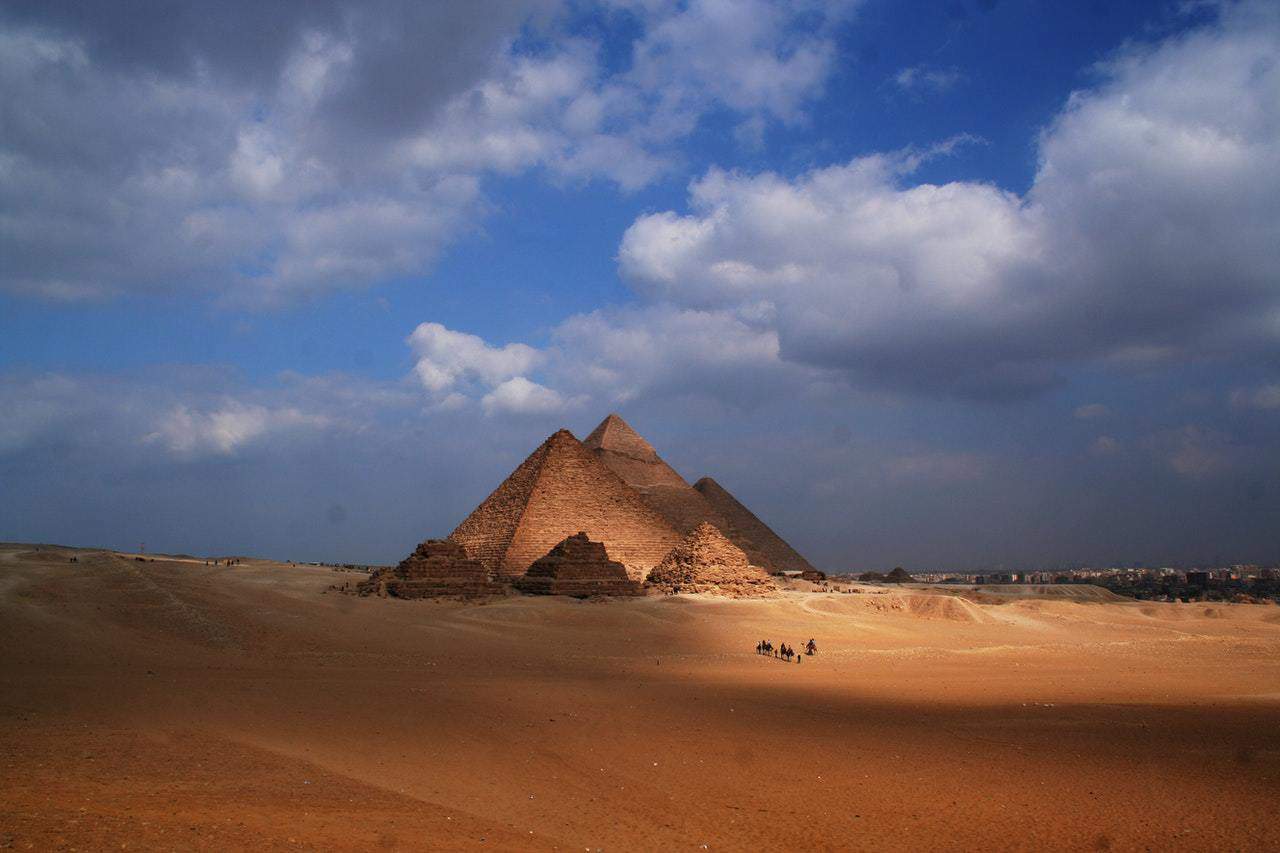 Cleanliness and personal appearance were vital to the ancient Egyptians. They considered people who were under-groomed pretty much inferior.

People of both genders often used make-up and wore Egyptian jewellery. They believed that a piece of jewellery was like an amulet, meant to safeguard the owners and give them power. 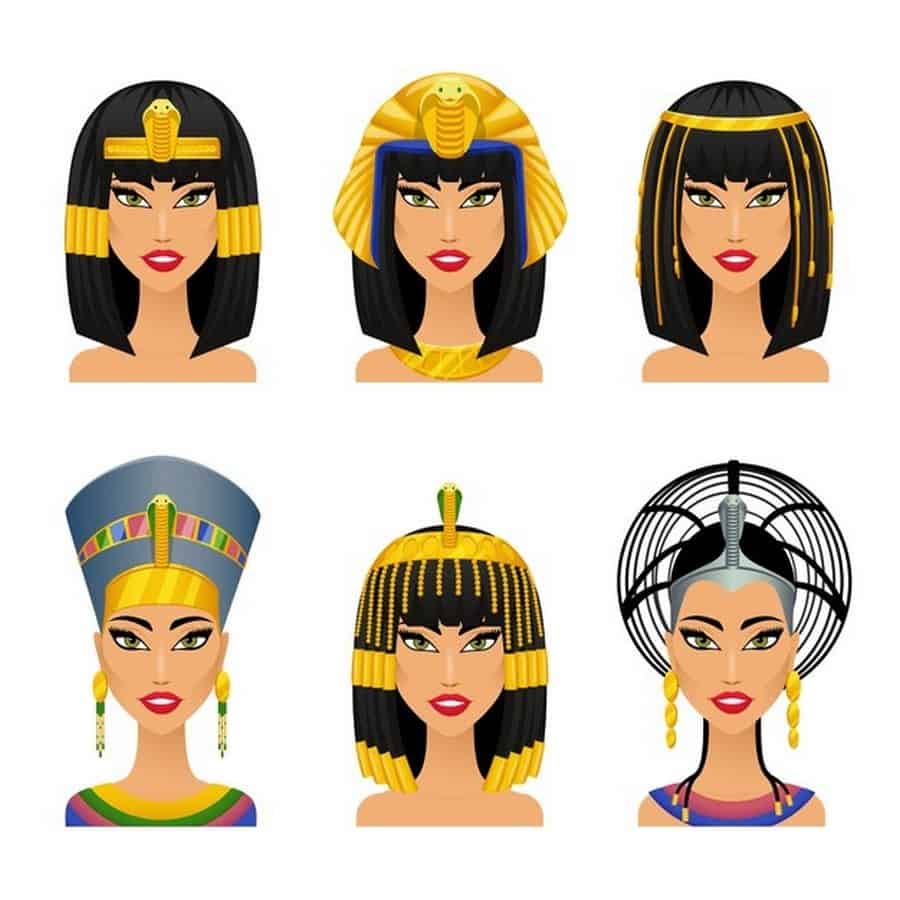 When it comes to clothing, cultivated flax was knit to fabric and then into fine clothes. Women usually created dresses from a rectangular piece of linen, spread across the body and wrapped around the waist. 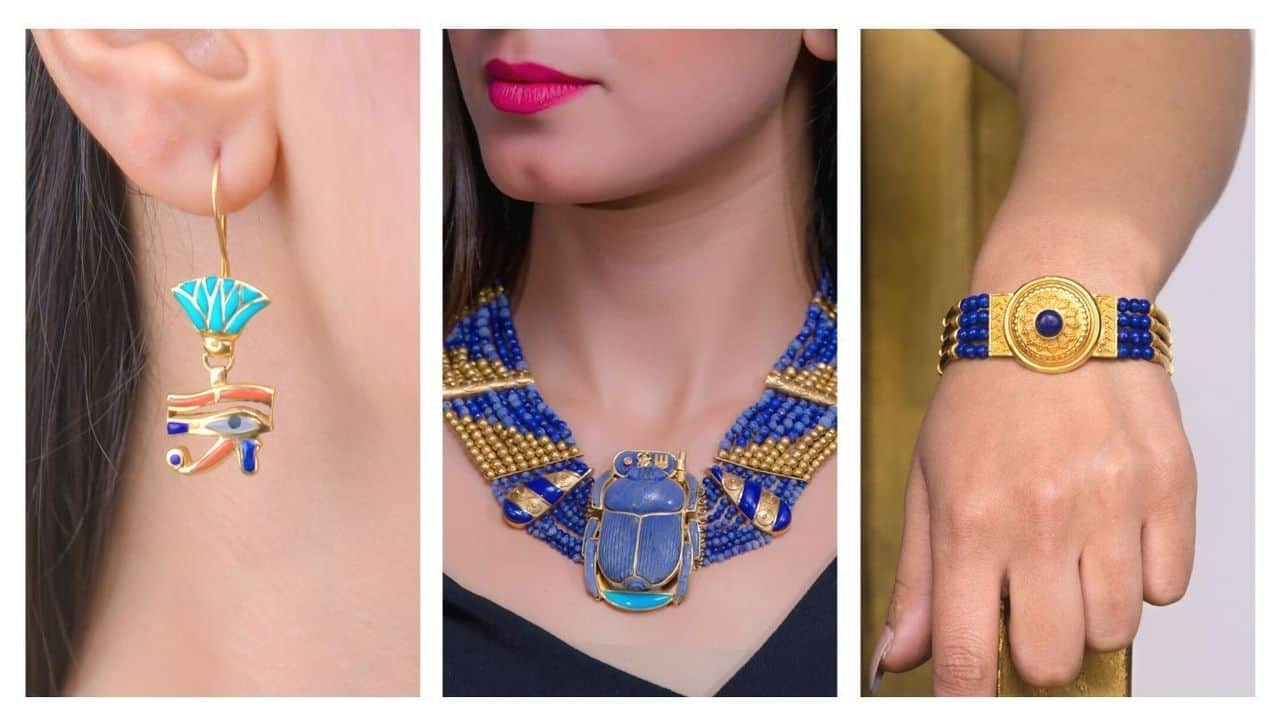 Egyptian jewellery has been worn by the powerful people from Egypt from earliest times, for self-adornment and also as an indicator of social status.

Silver and gold bracelets, rings, earrings, necklaces, pins, belt buckles and amulets with precious stones such as lapis lazuli, emerald green, carnelian and amethyst were crafted specially for this reason. Faience and glass have also been used to beautify various jewellery pieces.

The elegant style of all those mesmerizing jewellery pieces also represented ancient Egypt’s religious overtones. The motifs included depictions of deities; icons of hieroglyphs; and birds, animals, and beetles that played a big part in the concept of creation.

The scarab; the Eye of Re; lotus and papyrus plants; the vulture and the hawk; the cobra; and symbols including the ring of Isis, the shen ring (symbol of eternity) and the ankh ring (symbol of life) were commonly seen. Everyone had a strong connection with their jewelry pieces and even after passing away, they used to put a person’s jewellery in their grave and many other personal objects, to be used in the afterworld. 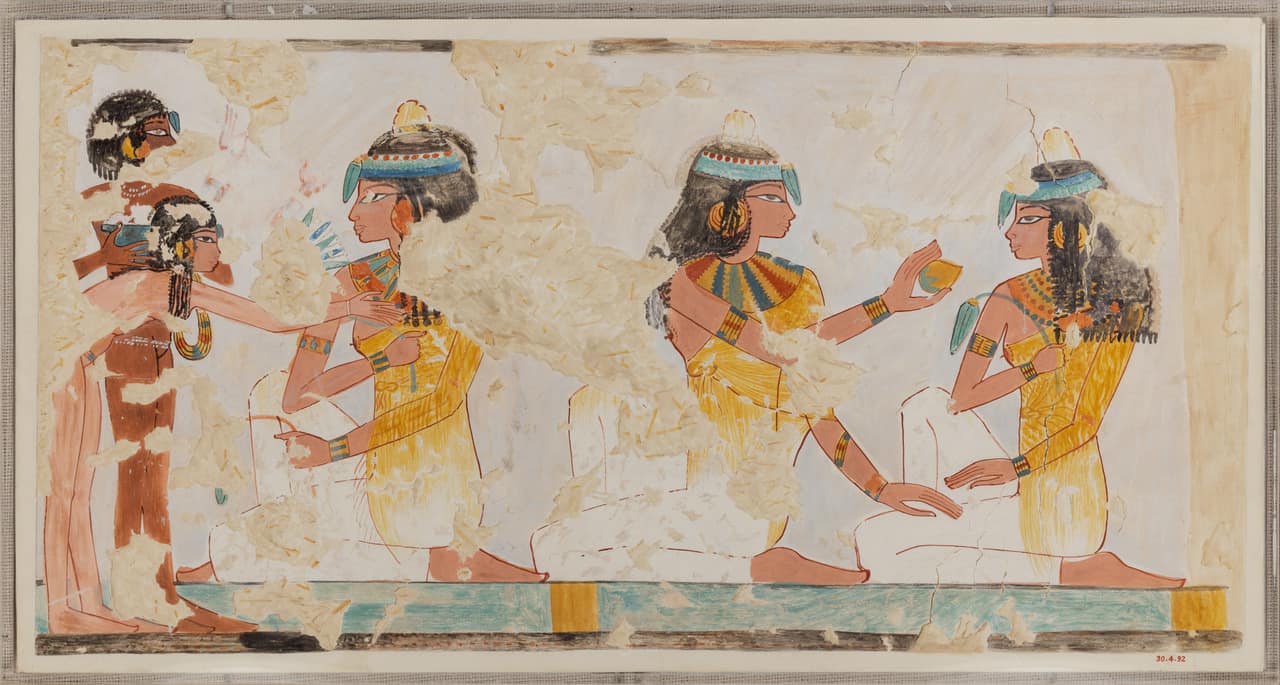 Egyptian clothes were the source for uniqueness and consciousness of the subject, expressed by depicting royalty, gods and goddesses in sculptures, temple carvings and artwork. Egyptian artistic conventions idealized the proportions of the body.

They always showed men with broad shoulders, slender bodies, strong arms and legs, and women had tiny waists, fit bodies, and round busts. Both wear elegant clothes and jewellery, and with their heads kept high, standing tall and straight. Their magnificent beauty demands the respect of anyone who looked at their depictions.

Ancient Egypt’s history represents goddesses and elite women wearing a sheath with long shoulder straps in the Old Kingdom. They carried sheaths adorned with gold thread and vibrant embroidery, and a form of the sari in the New Kingdom; there was only one narrow strap in the sheath.

The men were wearing knee-length linen shirts, loincloths, or kilts. However, leather loincloths weren’t rare. Often their clothes were covered with gold thread and decorative beads.

Wearing long white robes with a strap over one shoulder, the priests, viziers and some officials, and (one of the priesthood’s ranks) sem-priests carried cheetah skins over their garments. 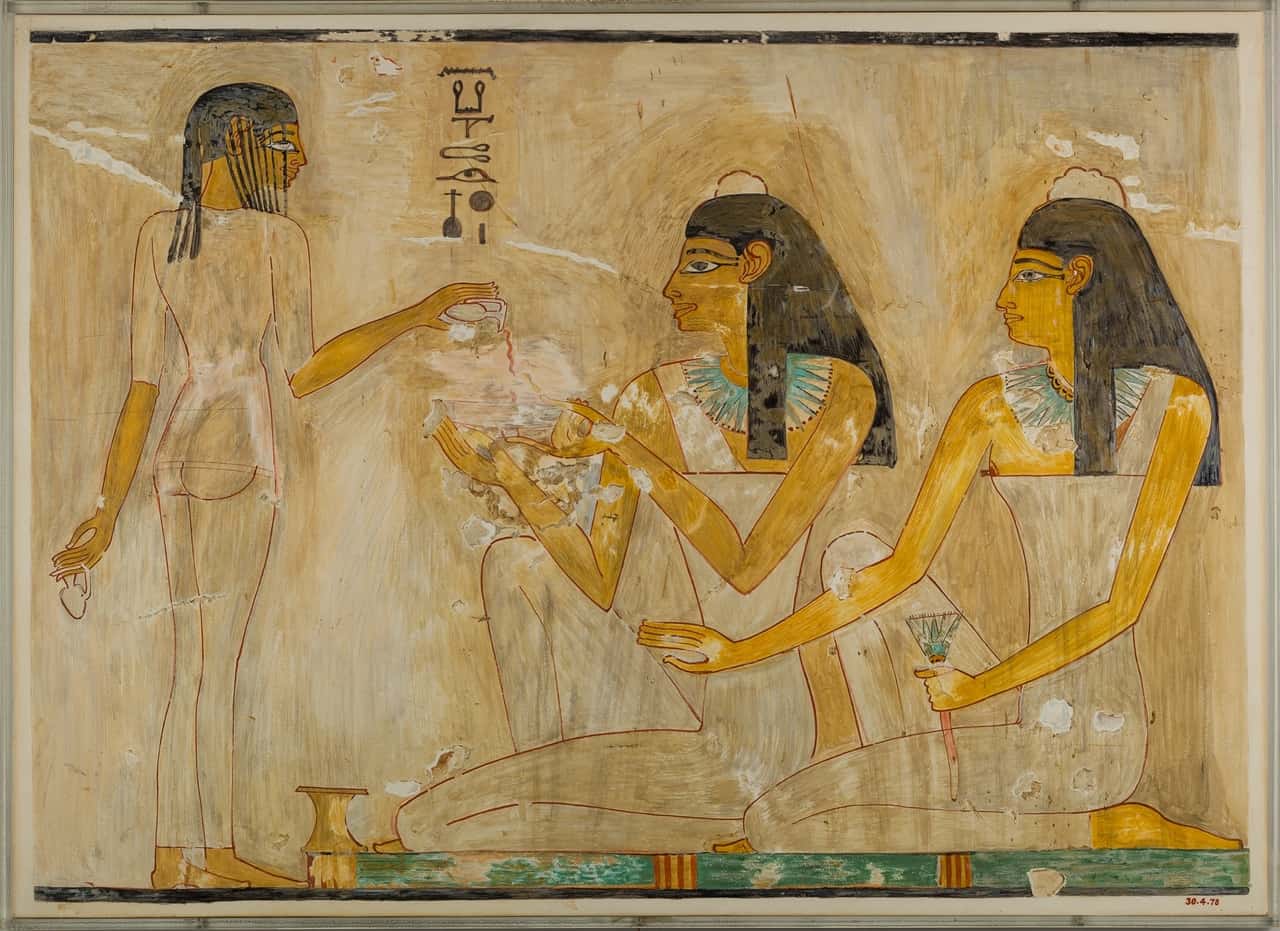 The Egyptian aristocracy took great care of every detail. Their hair was cleaned, perfumed and freshened with henna at times. Children had their hair shaved, apart from one or two braids, or a plait worn at the side of the face. This was considered the youth sidelock, a look worn by the god Horus when he was a boy.

Both men and women often wore hairpieces, but wigs were more prominent. They made hair extensions from human hair on the underside and had vegetable-fibre padding.

They were always long and thick, organized into meticulous plaits and strands. They may have been worn mainly for celebrations, as in Europe in the eighteenth century, on festive and ceremonial occasions. 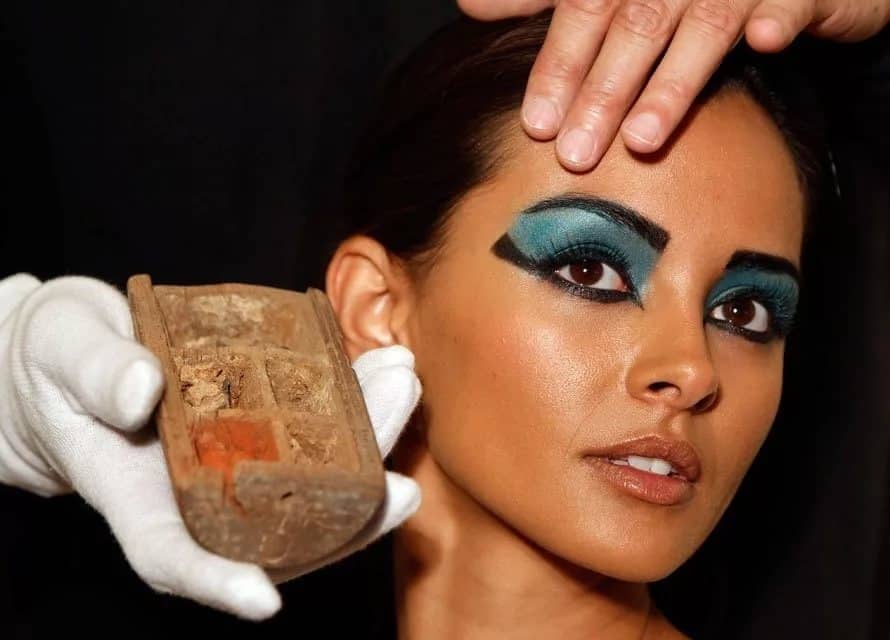 With different cosmetics, elite men and women transformed their appearance: oils, perfumes, and eye and face paintings. Eye make-up was worn by both men and women, most often with a line of black kohl outlining their lids. They used a mirror when putting on make-up, as we do nowadays.

To manufacture make-up, the Egyptians used mineral pigments. To make the eye shadow for instance, galena or malachite was powdered on stone palettes. Using fingers or a kohl pencil (made of wood, ivory or stone), eye paint illuminated the eyes and shielded from the direct sunshine.

They brushed the powdered green malachite underneath the Old Kingdom’s eyes and made the red ochre of rouge to stain the face and lips. To shield the skin, fats and oils were sprayed, blended into perfumes and applied to the incense cones placed on the head’s crown. 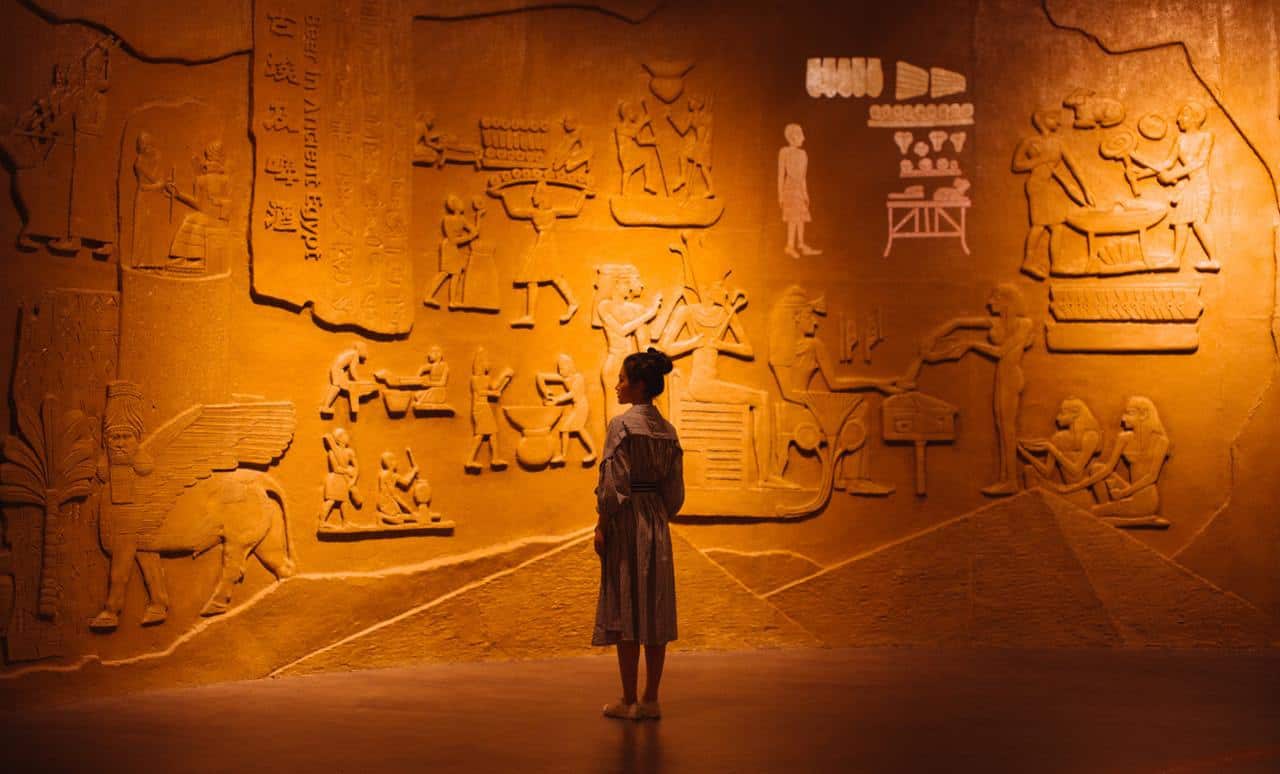 Almost all men and women wore cones with fragrance on their heads. The cones were made of tallow or fat, which eventually melted under the sun’s warm rays, generating a wonderful scent. Most people wore papyrus-made sandals, and a common form of footwear was sandals made of vegetable fibres or leather. But the historians often showed men and women barefoot, even the rich. We hope you enjoyed this journey through time! 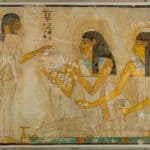 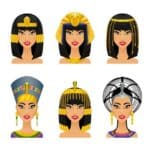 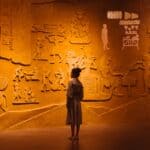 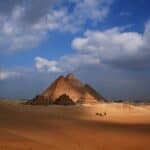 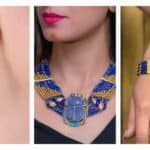 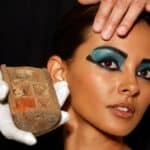 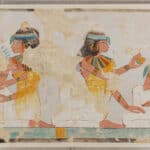 Tags:
Previous Article
These Are The 10 Best Electric Scooters in 2022
Next Article
15 Interior Design Trends That Will Be Huge In 2021