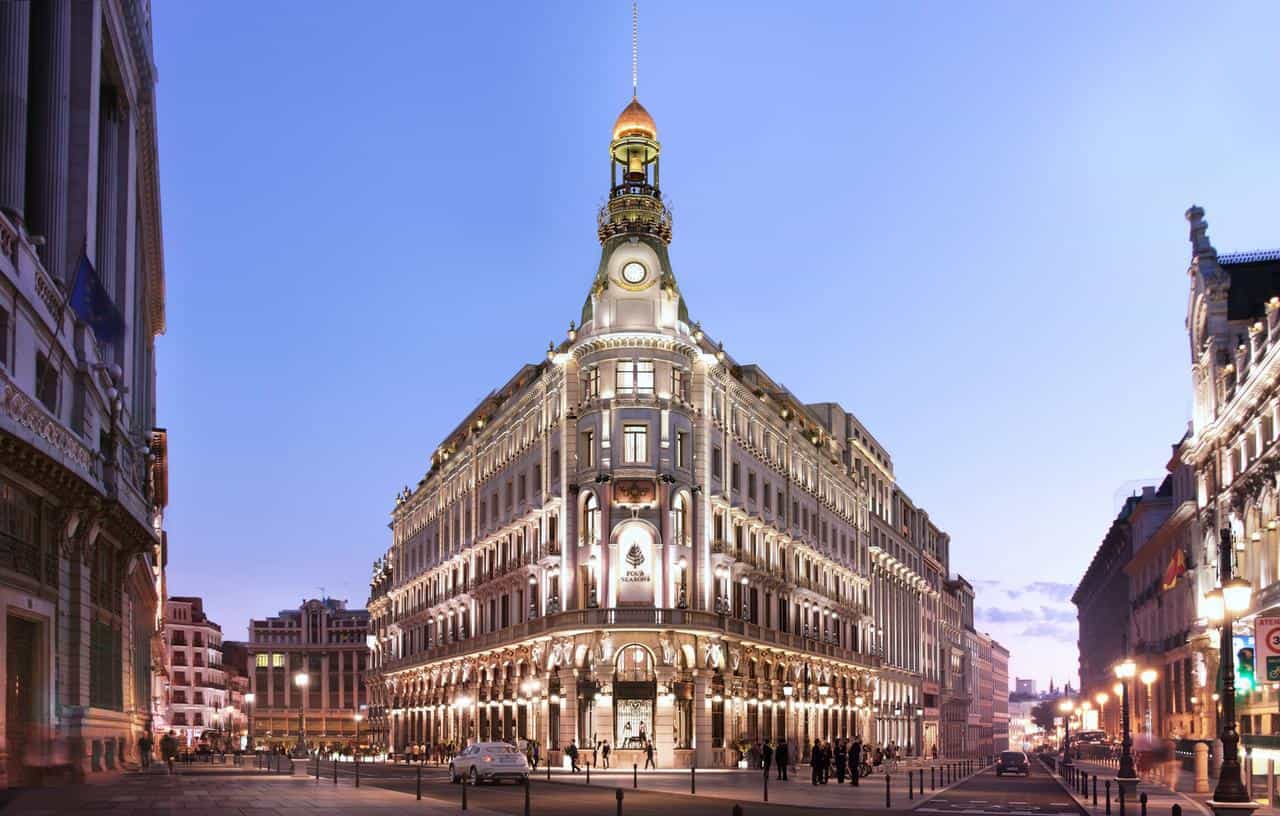 Home to the oldest restaurant in the world, Sobrino de Botín, the biggest ZARA store, numerous museums, lavish palaces and wonderful parks, Madrid is easily one of the world’s most popular tourist destinations.

This edifice of opulence welcomes guests to experience at least one of 22 Four Seasons Private Residences, as well as the Galería Canalejas luxury shopping mall. 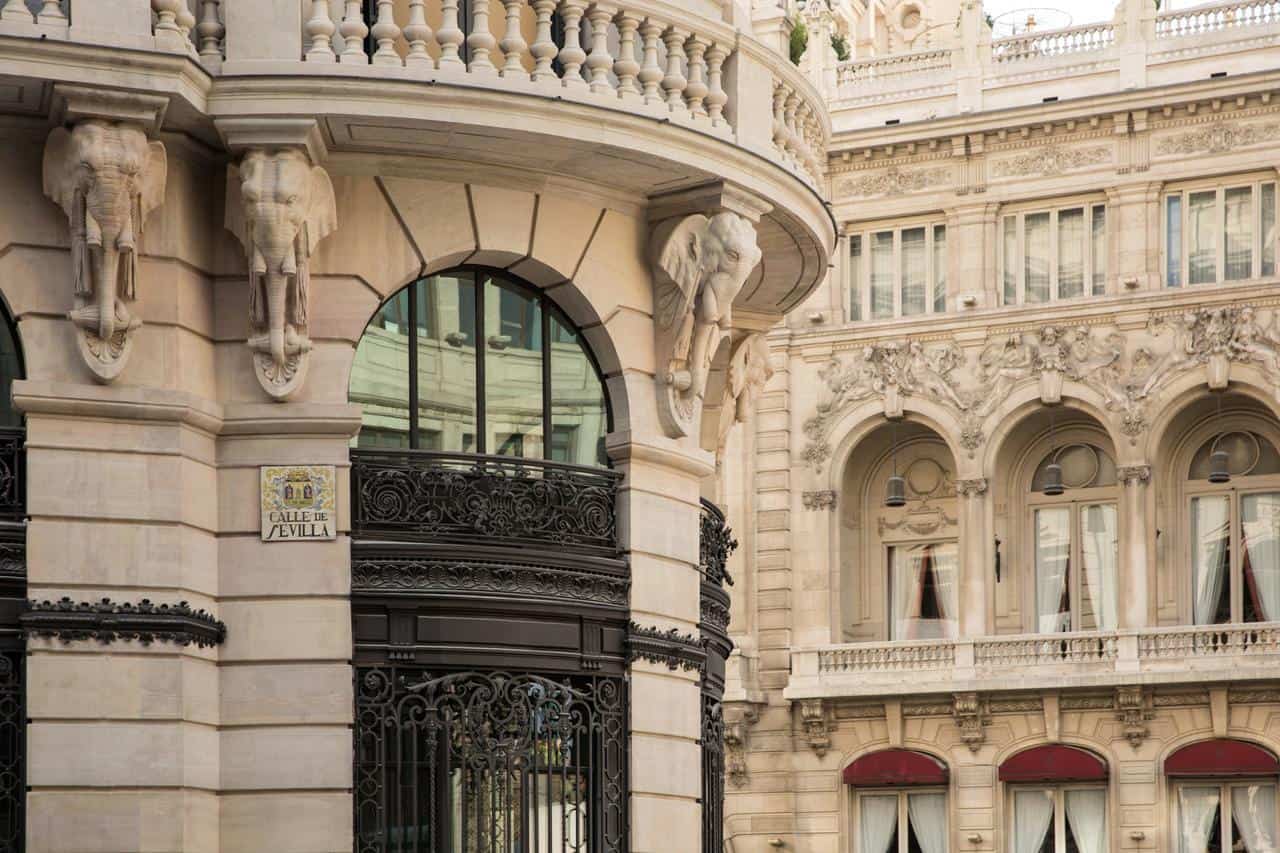 Sure, the hotel’s 200 luxurious rooms and suites are also worth mentioning, while the rooftop restaurant, led by the Michelin-starred chef Dani Garcia and the elegant El Patio lobby lounge will most likely grab your attention and keep you occupied plenty of your time here.

The gorgeous Dani restaurant and bar delivers a new dining concept with delicious tapas and astonishing city views that will make any visit here an overwhelming one. Sounds delicious, doesn’t it? 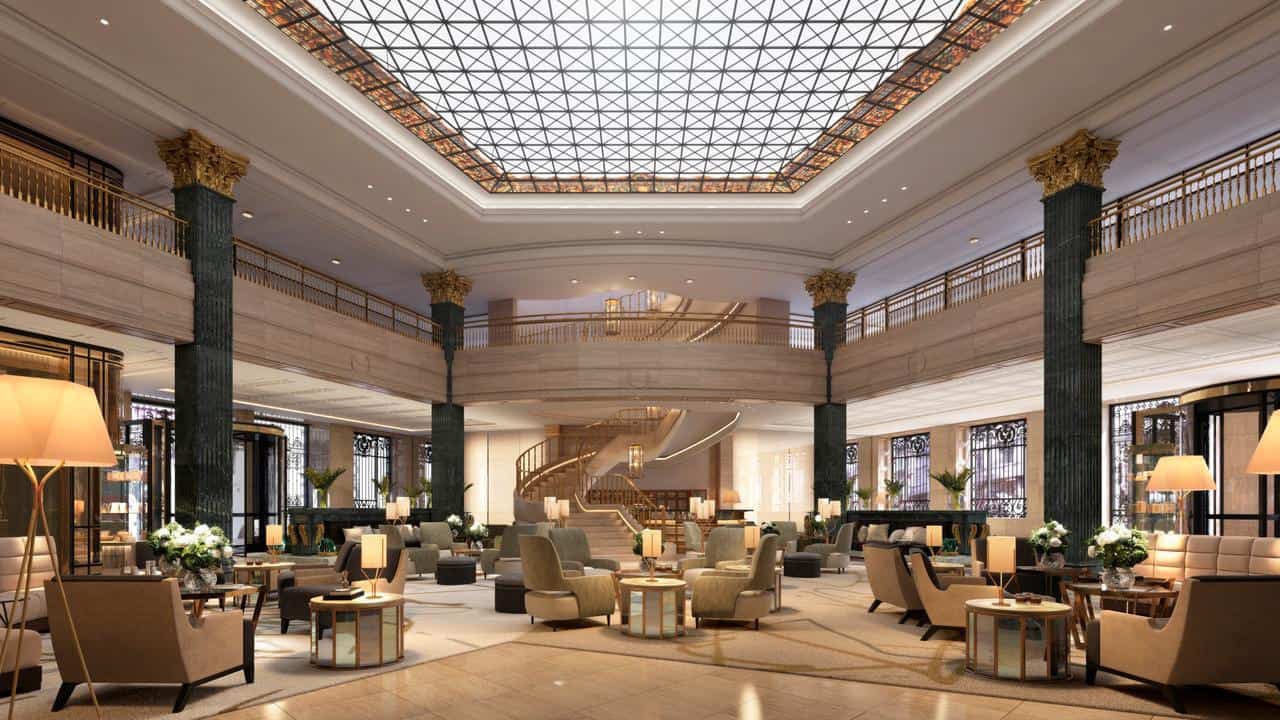 As you walk inside this hotel, I am quite sure you won’t be able to look away, as the grandeur of the interiors and the palatial decorations that surround you were meant to hypnotize – and, they do. The Four Seasons Hotel Madrid looks outrageous, opulent, without putting off a negative vibe – like, Louis the XIVth and his name would.

Interior designers decided that it would be best, if not perfect, for 3,700 scrupulous restored historic artifacts to join forces with contemporary Spanish artworks and comfortable furnishings in an attempt to seduce every guest. 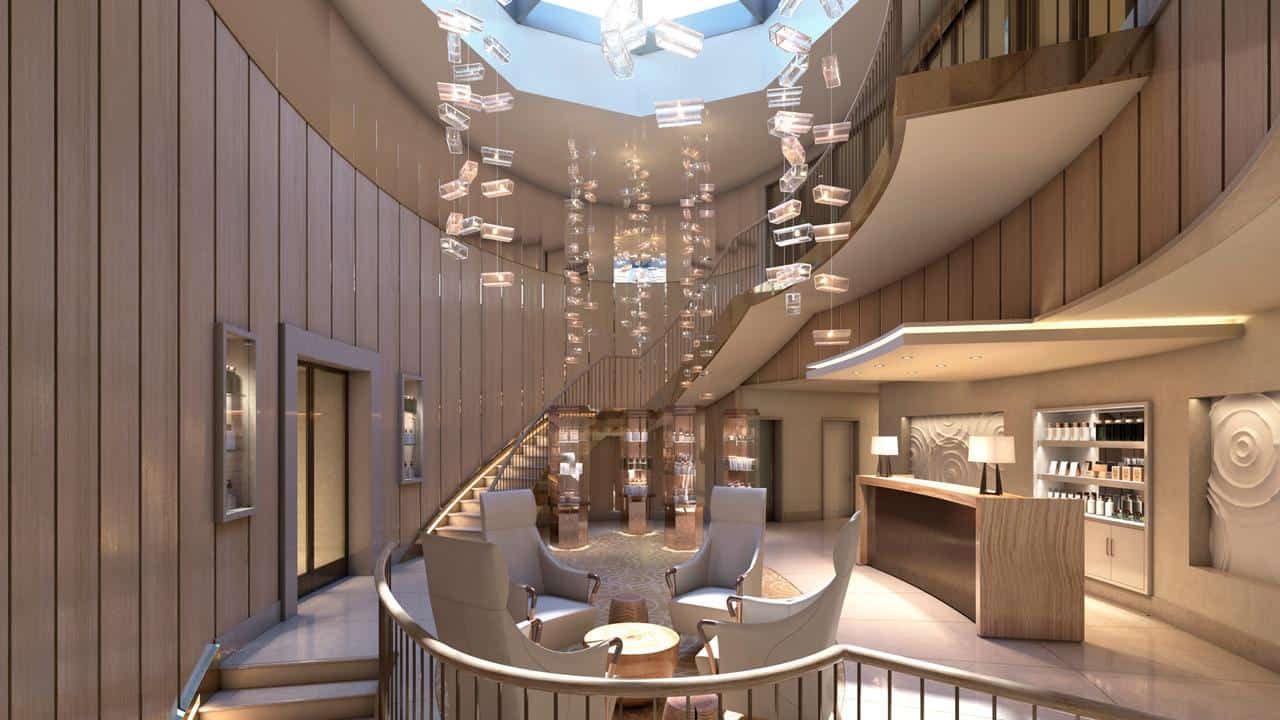 The hotel’s El Patio lobby lounge could (and should) be described as flamboyant – feel free to look for a much more powerful word to describe this place; it will most likely fit this Four Seasons offers.

Speaking of which, the hotel’s spacious and luxuriously decorated deluxe rooms should also be on your mind when you’re looking to make a reservation at this hotel. This new Four Seasons masterpiece is said to offer the largest rooms in the capital, like the Superior Courtyard Rooms and their 484 square feet. 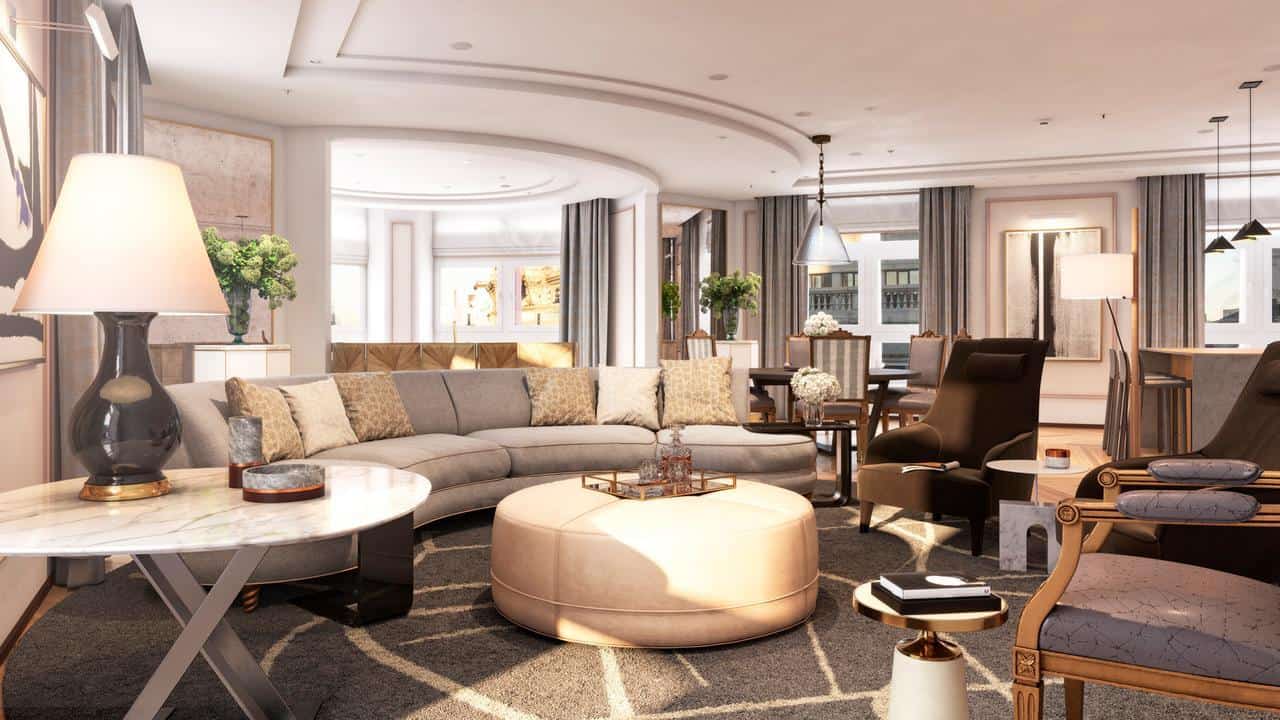 But those of you willing to ignore price tags will most likely go for the 4,305-square-foot Royal Suite.

Here, guests may enjoy personified luxury delights, with a full-marble bathroom replete with a circular bathtub, a huge crystal chandelier, and top-notch furnishings part of the offering.

The hotel’s ‘piece of resistance’ is represented by the ‘Starry Night’ installation, courtesy of Catalan sculptor Eduardo Pérez Cabrero – one of the 2,500 artworks displayed at the Four Seasons Hotel Madrid. Impressed much? 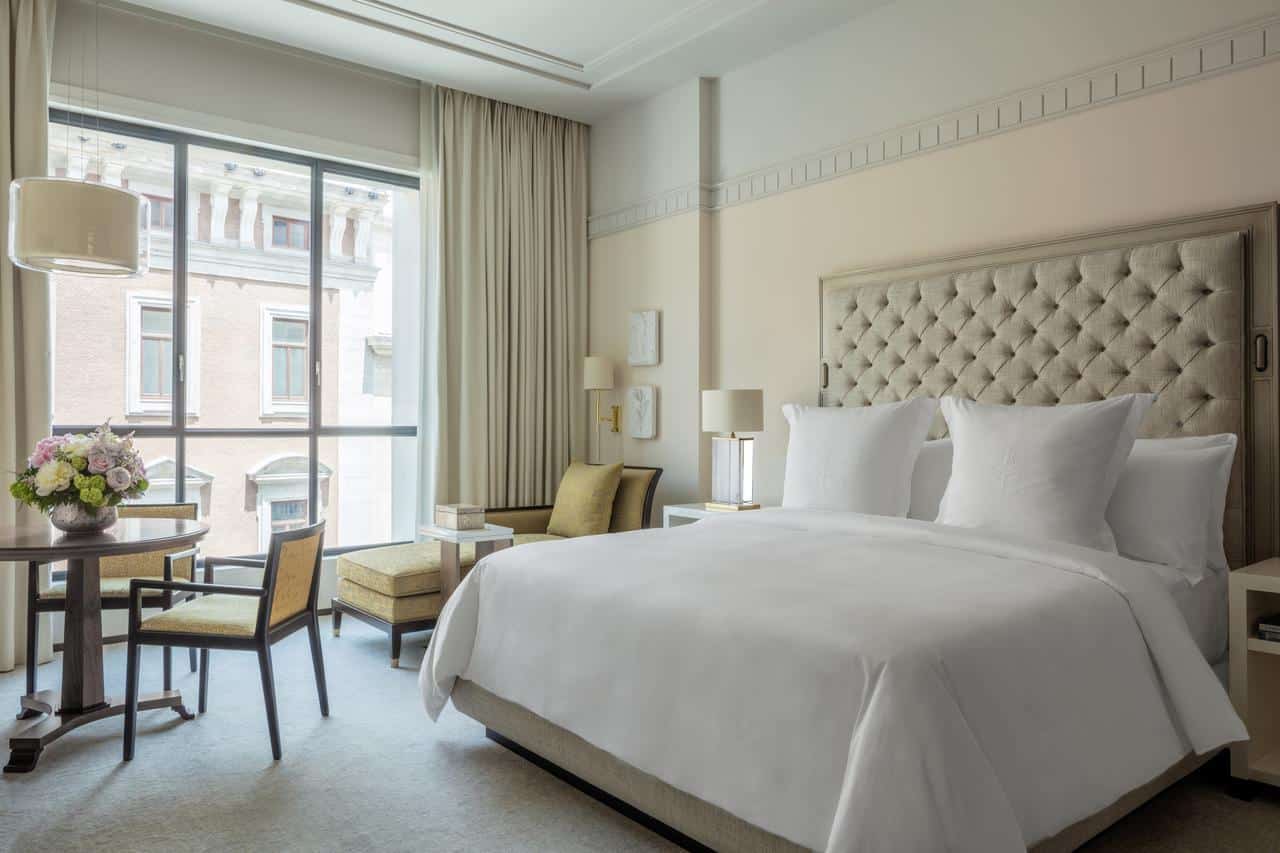 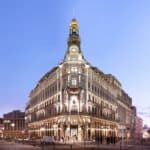 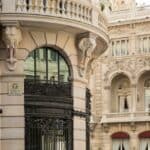 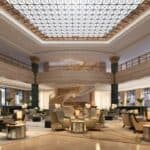 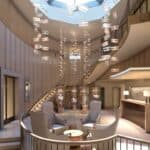 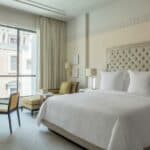 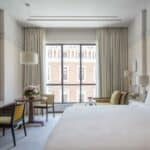 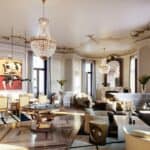 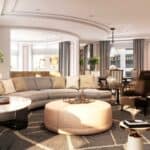 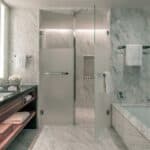 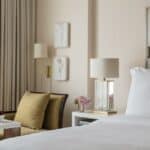 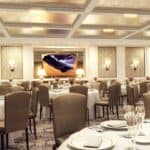 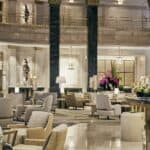