25 Best Luxury Bicycles for Those Who Want More 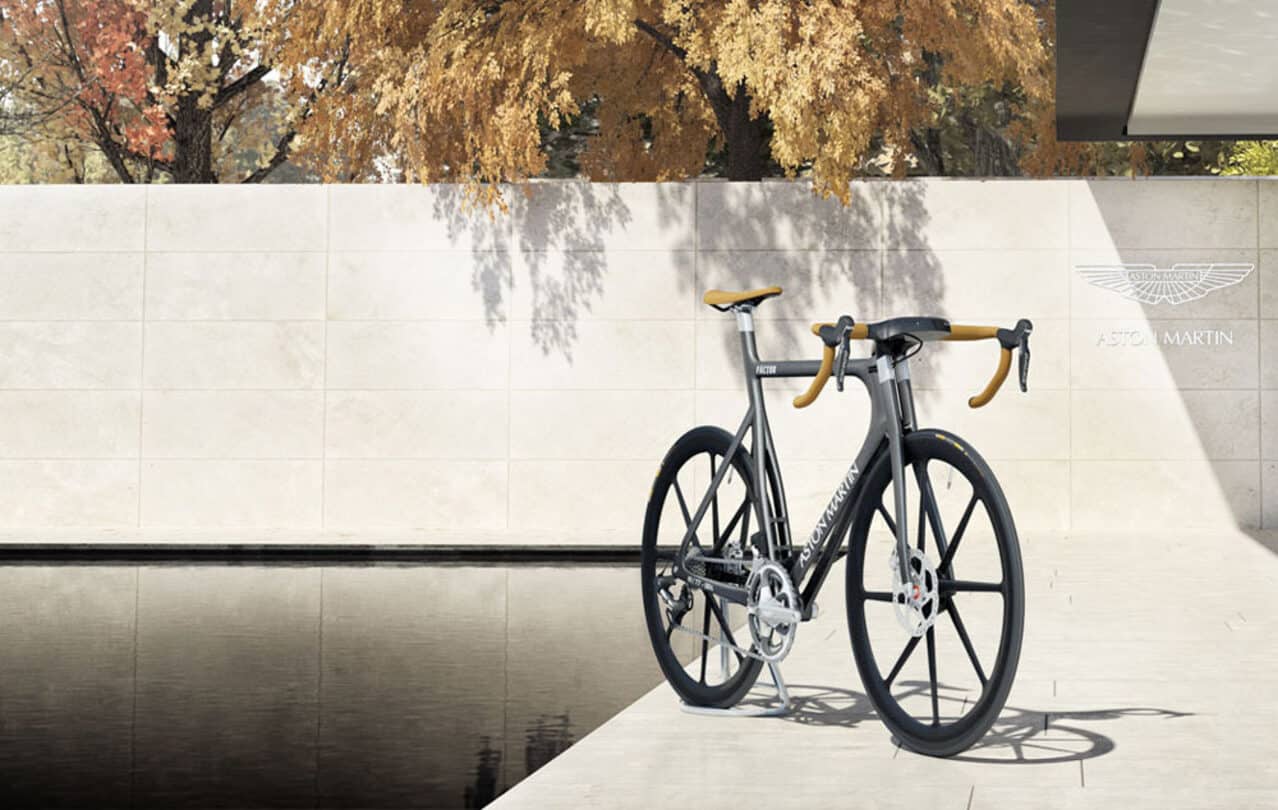 If you ever thought bicycles are cheap, the following 25 luxury bicycles will prove you wrong. Forget about steel frames and even carbon fiber. There’s gold and diamonds on some of these two wheeled luxuries. That may not guarantee high performance though, but it does guarantee you won’t find them where you left them five minutes ago, after coming back from the store.

Beyond the useless opulence of some of these ultra-flashy designer bikes, there are some real gems in there. Ultra-high-end, high performance models you’ve never heard of, but more than probably would love to ride.

Whatever your preferences, here’s the ultimate wish-list of bicycles, from the city beauties to all mountain beasts. 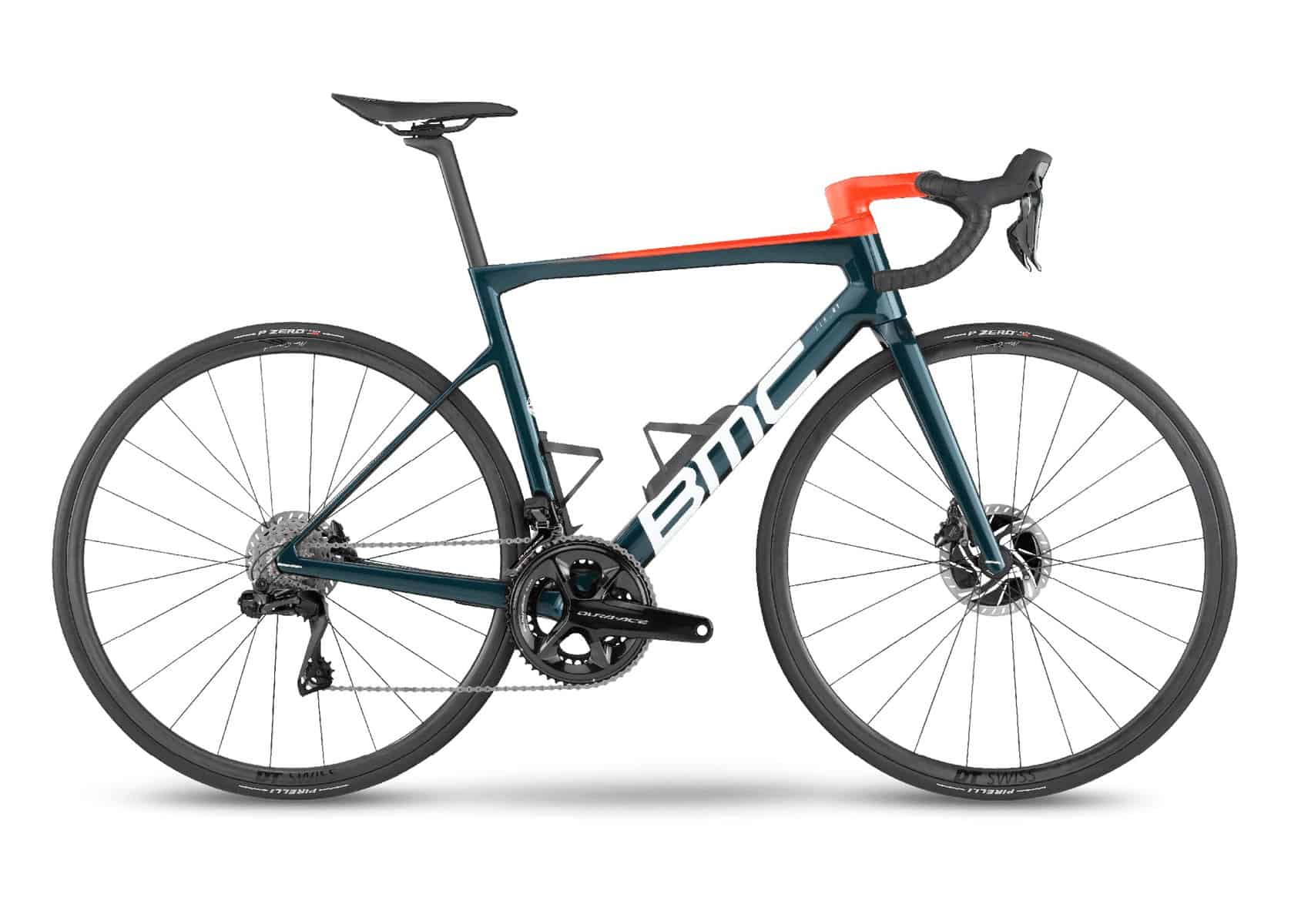 The BMC TeamMachine SLR01 Disc One is a top class bicycle that should need no introduction. The guys at BMC have wonderfully combined their World Tour winning bikes with the latest in braking power, disc brakes.

Add to that high end components, and dozens of hours of testing, and you’ve got a bike that’s ready to get your farther and faster than anything. Unless motorized, that is.

You might not have heard about S-Works, but you surely know Specialized. Well, S-Works is Specialized high end range of bikes, and a wonderful blend of style and performance.

The Venge Di2 is one of the most aerodynamic bicycles you can find on the market. The project was started as a collaboration with McLaren, so you can bet it has benefited of some of the best engineers and technology there is. Back in 2011, Mark Cavendish rode the bike at the Milan-Sanremo competition, the first race of this particular bike model.

Today, the bike received many updates and the special Sagan collection was designed together with another cycling champion, Peter Sagan. 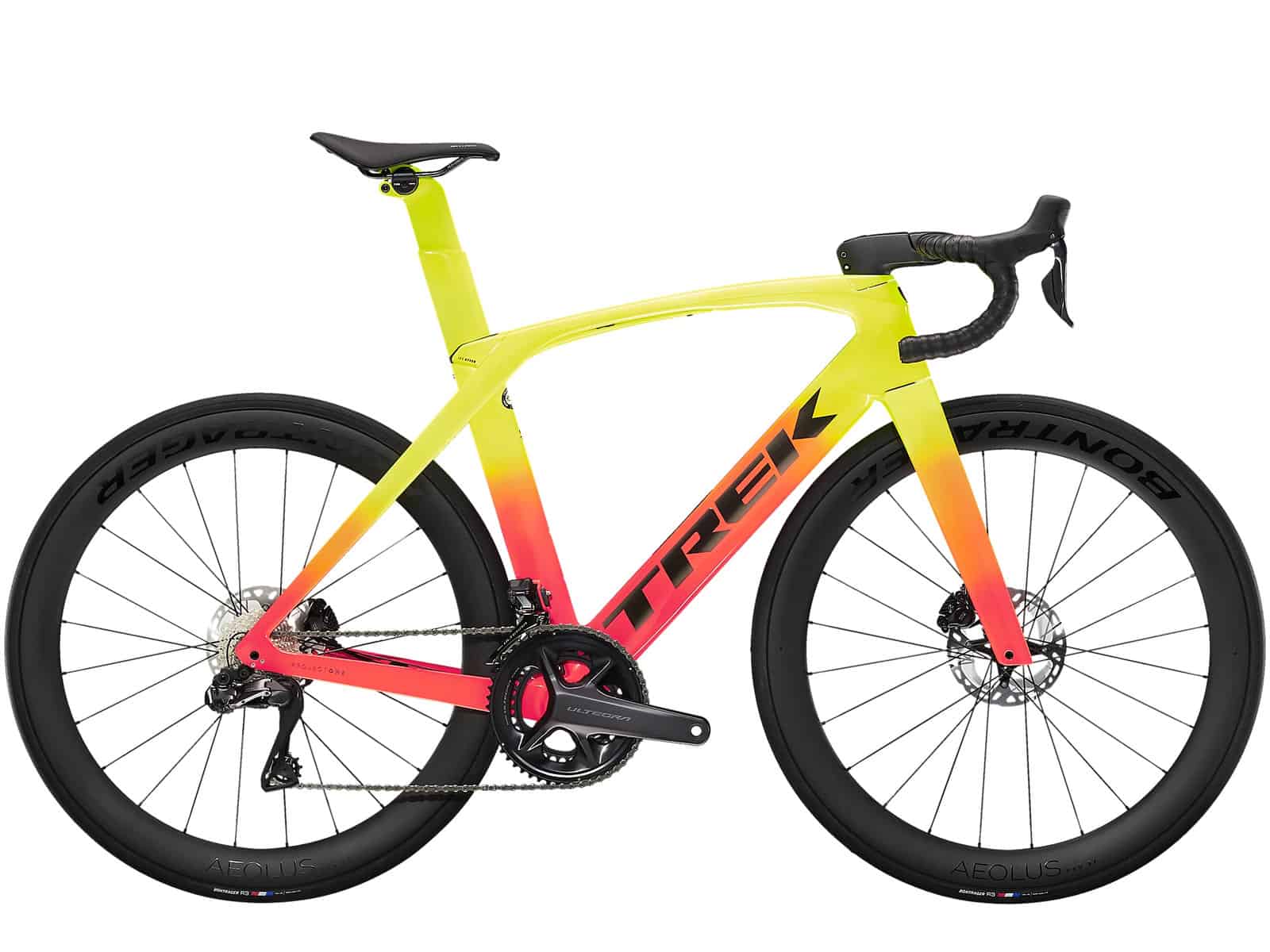 A superb creation, the Trek Madone SLR 9 Disc eTap is the fastest road bike the American bicycle manufacturer has made so far. If you’re wondering what makes it cost almost $14k, it’s the use of the most high end components. 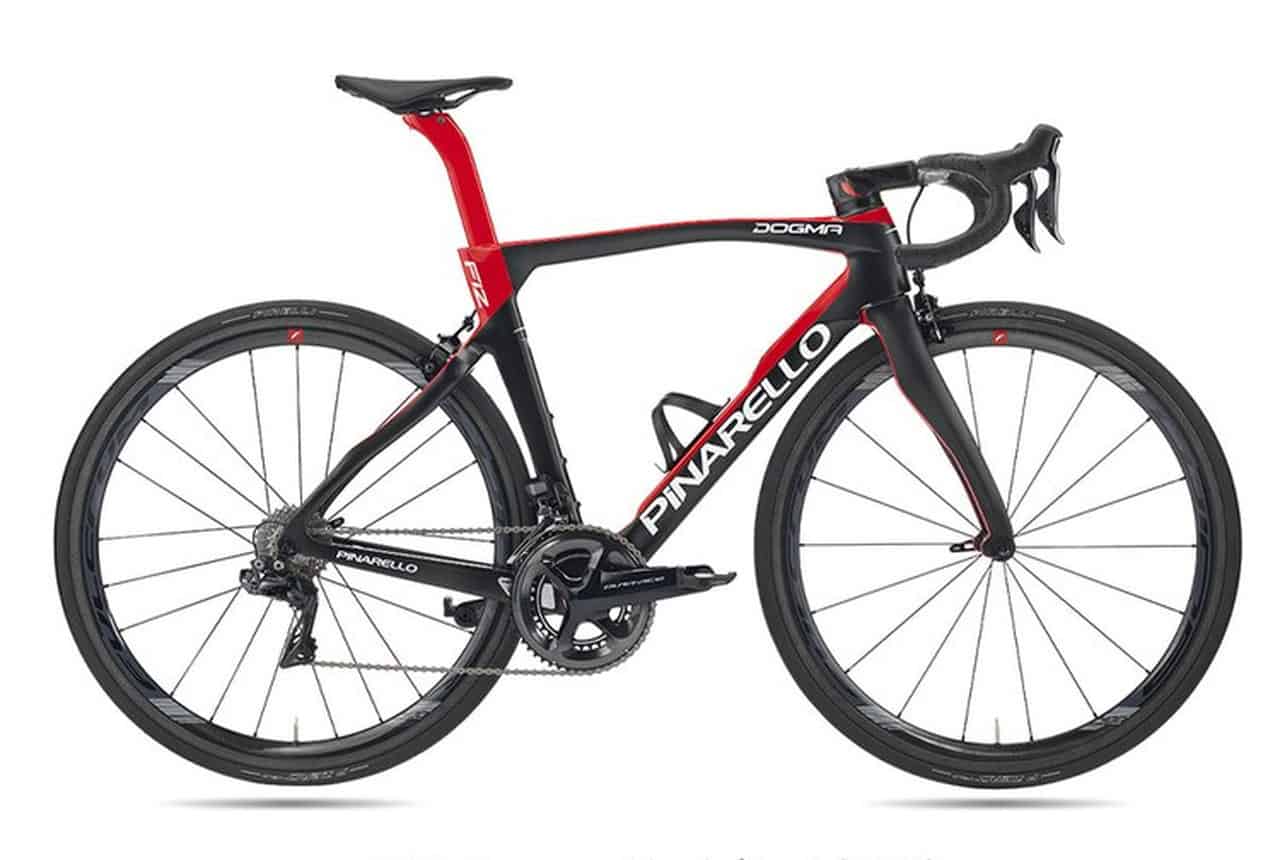 Pinarello is an Italian bike brand that many bike racing fans are in love with. The Dogma F12 Red eTap is the brand’s latest reason for that.

The best of the best in terms of road bikes, the Dogma F12 is the choice of many Grand Tour champions, which justifies the almost untouchable price of almost $15,000. 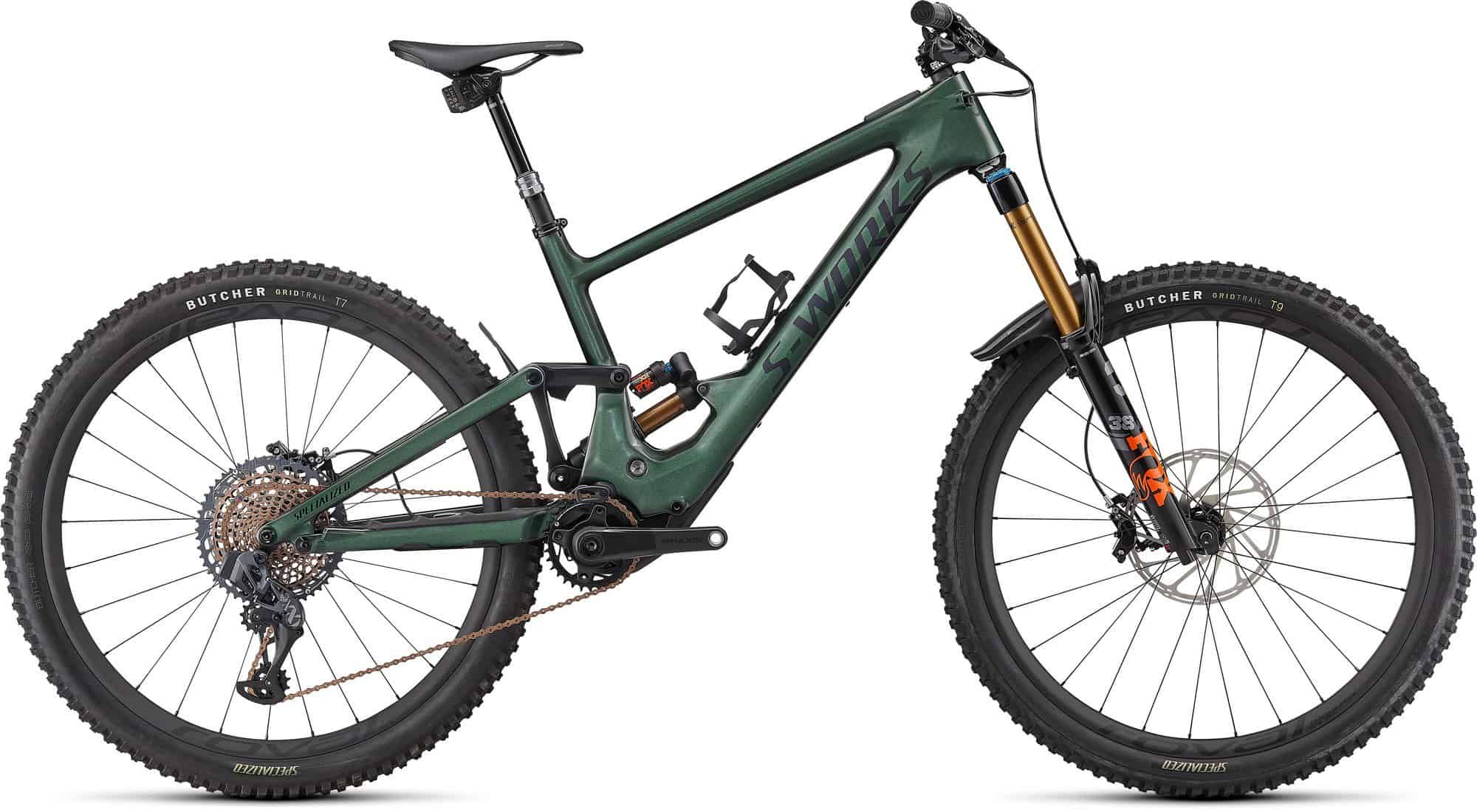 The Specialized Kenevo SL S-Works is one of the most impressive MTB out there. Its amazing performance paired with a Turbo Superlight 250 watt motor and a 320 Wh battery ensures plenty of juice for going back up the hill. The battery should last around 4.5 hours.

Super lightweight, the full suspension bike has 170mm of suspension travel both front and back for a fun time down the track. But that’s not all, as the bike features some interesting software functionality such as power adjustments on the fly, bike updates and live energy consumption, plus heart rate monitor compatibility. 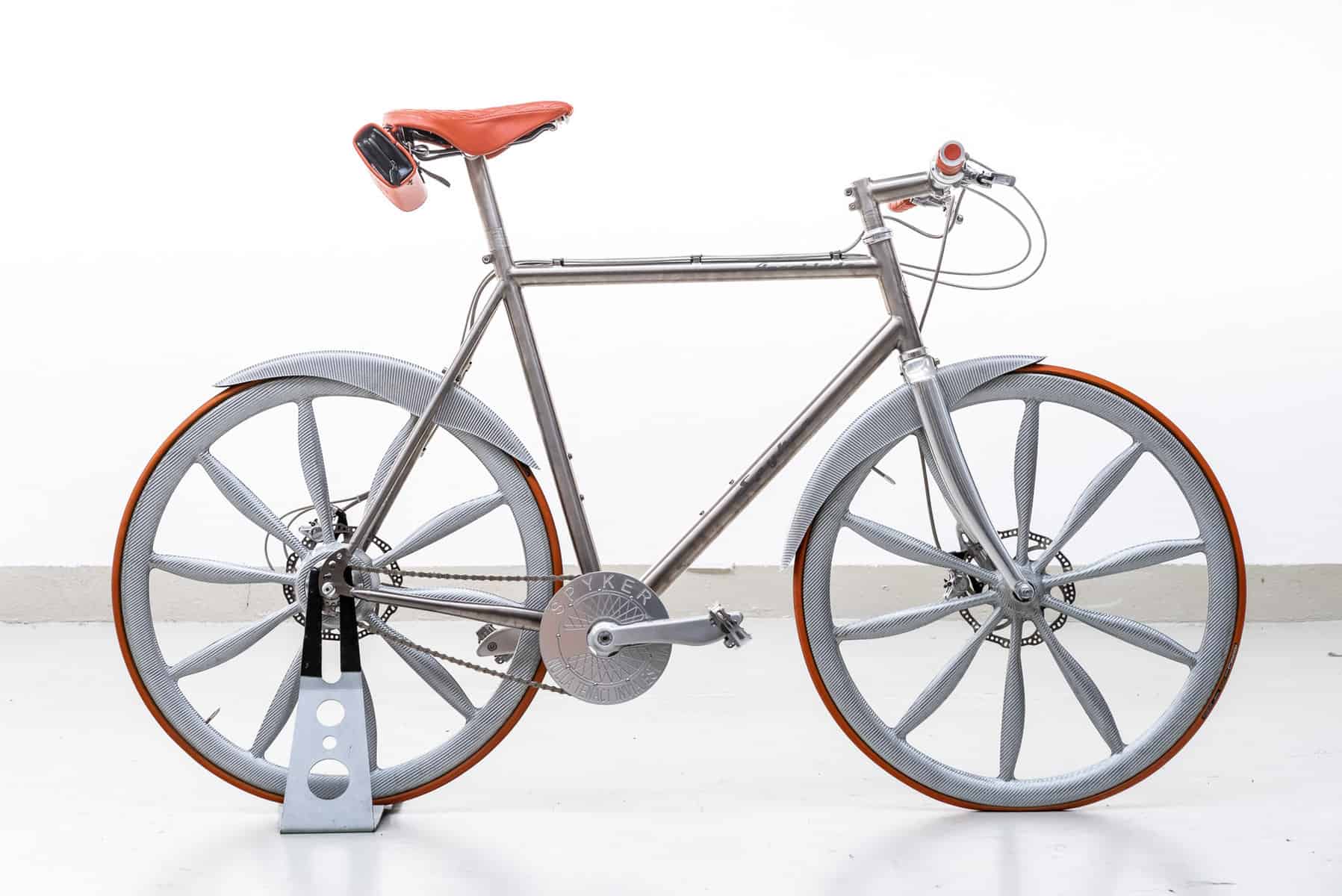 The Koga Spyker Aeroblade is an interesting combination of old-time design with modern tech and wacky wheel aesthetics. The result is a commuter bike with titanium frame and leather saddle, disk brakes and internal rear hub. 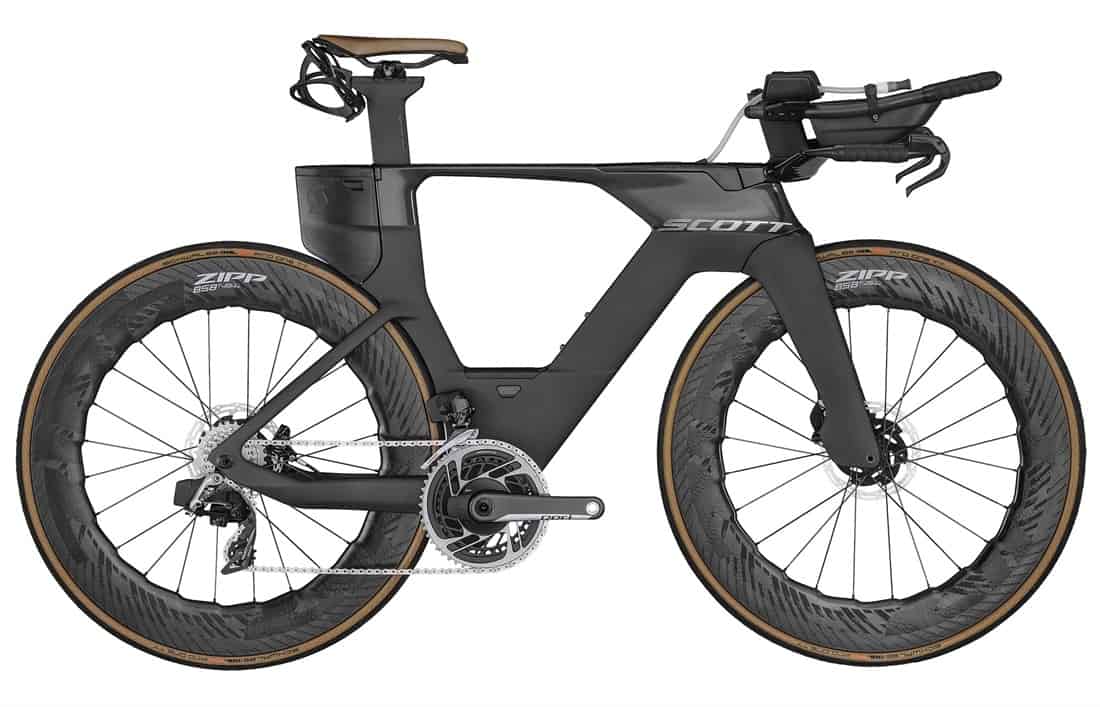 If Batman would have rode a bike, it would have been the Scott Plasma RC Ultimate.

This is a triathlon bike with some interesting features. It’s got a hydration system and storage boxes, something you won’t find on other bikes. Cables are integrated into the frame for maximum aerodynamic capability, and the components are ultra high end to ensure it’s the fastest bike. 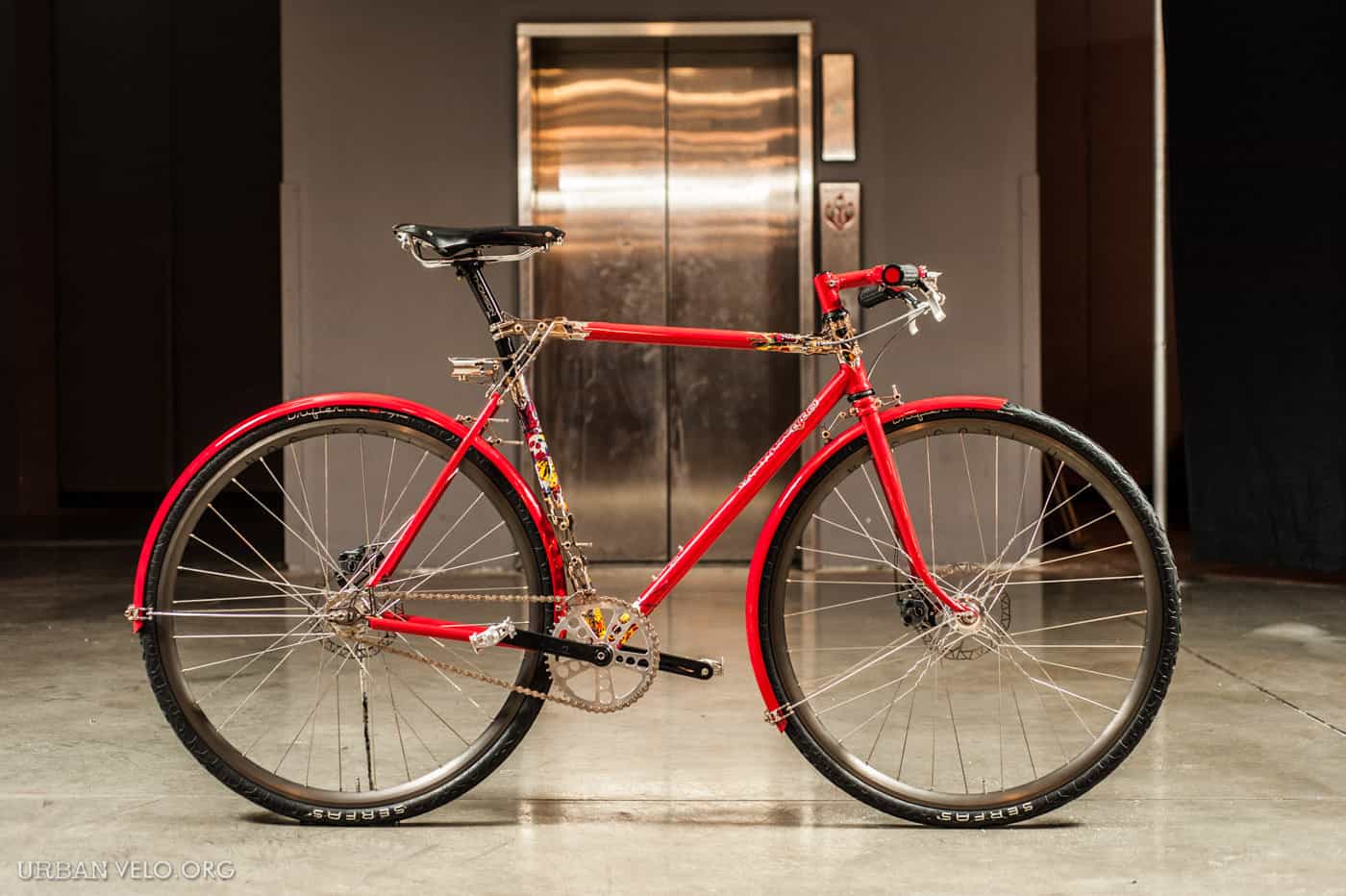 Unveiled back in 2014 at the North American Handmade Bicycle Show, or NAHBS, the Sunrise Cycles Commuter is nothing when it comes to performance. Just a regular stainless steel bike.

What it does different is art. Odd enough, but this is a concept bike that does art while its wheels are turning. There’s a window into the headtube, where the artistic side is situated.

It’s not gonna be fast, but it’s gonna turn heads. 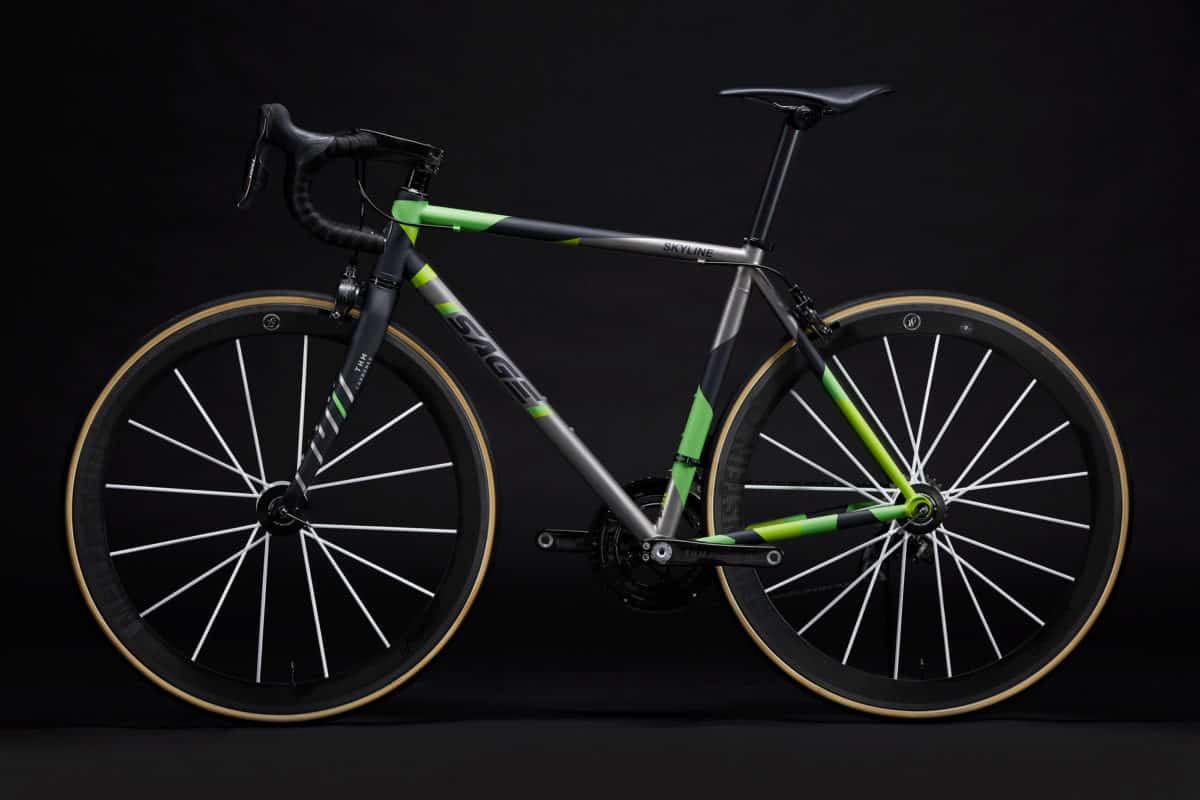 With a whooping $20k price tag, this custom bike has some aces down its sleeve with which to impress everybody.

Crafted by the SAGE Titanium Bicycles and displayed for the first time at the Sea Otter Classic back in 2018, the SAGE Skyline Project Bike weighs only 13.2 pounds. If you don’t know much about bicycles, know that this is extremely lightweight. 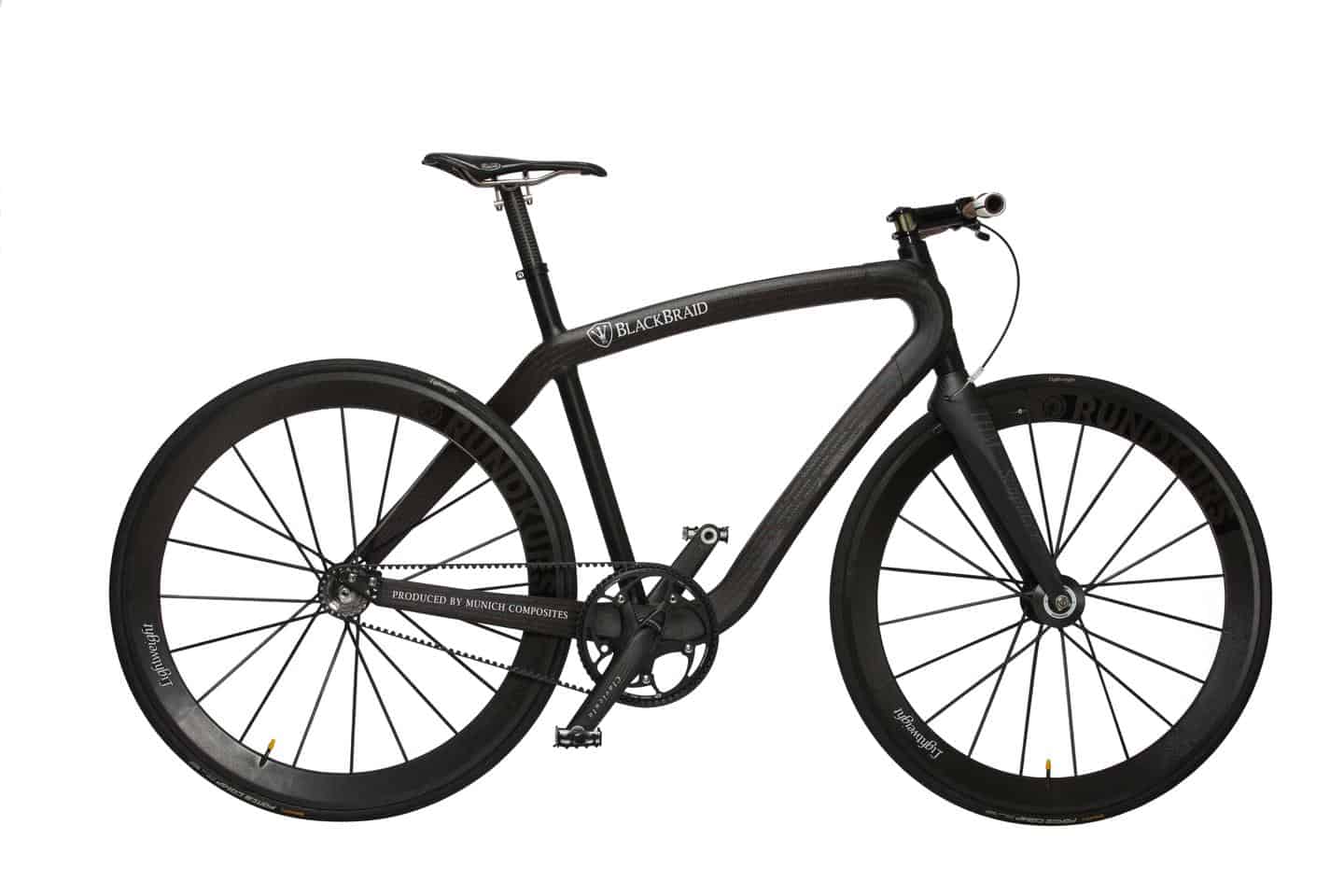 Going even further down in weight is the P-G Bikes BlackBraid, which weighs only 11 pounds. That figure makes it one of the lightest bikes in the world.

To make it so light, the creators have used carbon braiding technology, and a frame that is manually assembled. What saves much of the weight is the fact that it’s a fixie, meaning it’s a single speed only, so it doesn’t need all the complex and heavy drivetrains found on most other bicycles.

A collaboration between Paul Smith and Mercian Cycles has given birth to this awesome tandem bike.

It’s hand built, it features a lightweight frame from Reynolds 853 steel, and many top notch components. There’s even an electronic group-set. It’s not the fastest by any standards, but it’s unbelievably beautiful.

And you can split the high price in half with the one you’re sharing the ride with. It’s a tandem after all, right? 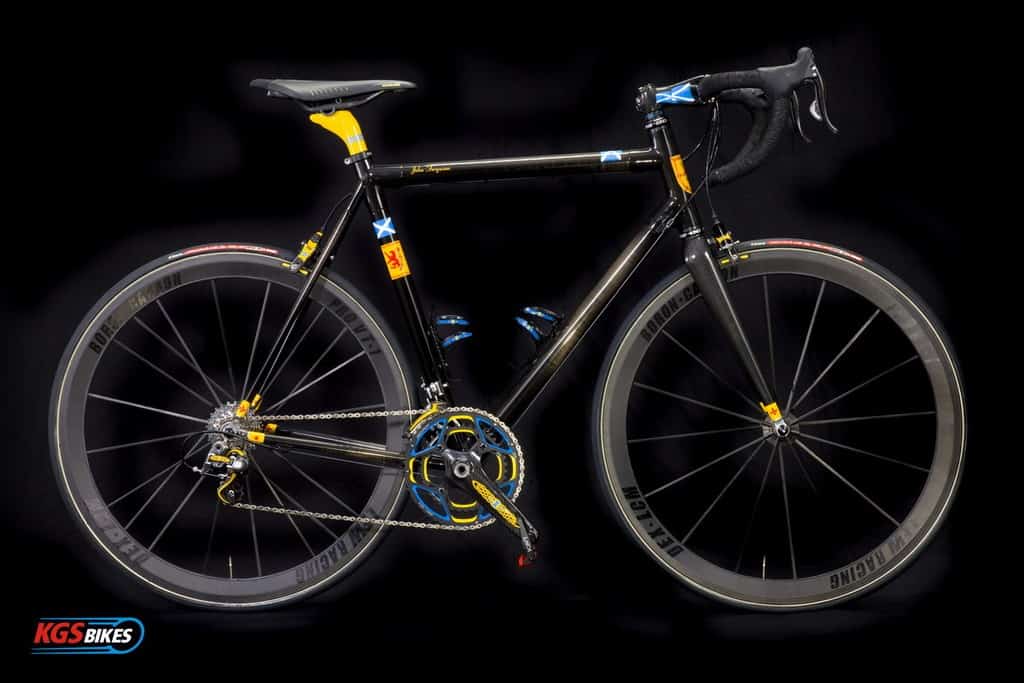 Texas based bicycle manufacturer Kevin Saunders and his obsession for making the perfect bike has brought this “Tier 3” custom which rivals an automobile in terms of costs.

Besides the high end components, the bike features fine woodwork, making it one of a kind, something like the Lamborghini of the bicycle world. 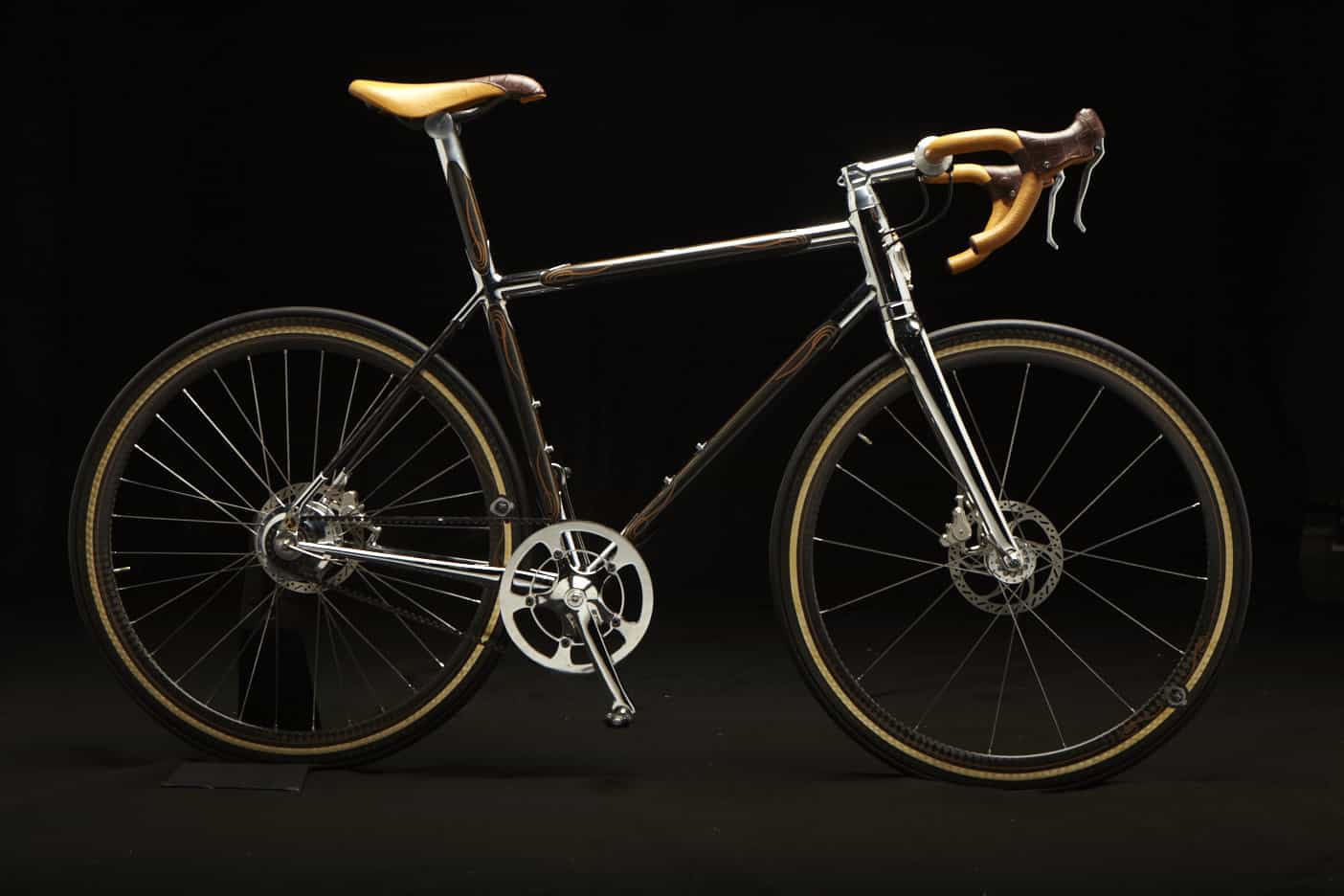 Phanuel Krencker is a Danish design engineer that proved a bike doesn’t have to be only high tech to be high valued.

His example, a Bicyclettes de Luxe chrome and carbon fiber bike, has been shown to the world in 2011 at the North American Handmade Bicycle Show. The bike is a beautiful creation that speaks of luxury only looking at it. 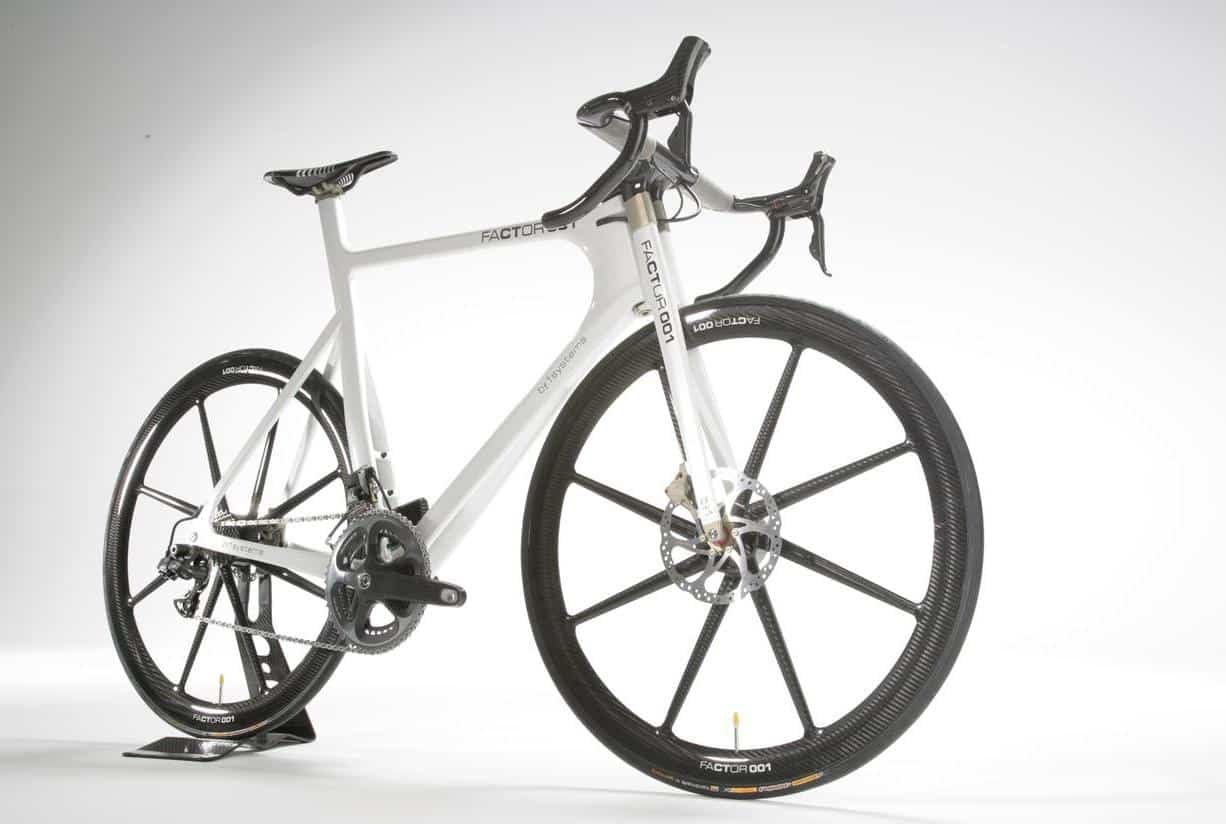 What do you think happens when Formula 1 engineers try to create a bicycle? Well, the Beru Factor 001 is what happens.

Created by the British F1 engineering firm BERU F1 Systems, the Factor 001 is a road bike like none other. With a carbon fiber monocoque frame, carbon ceramic brakes, and an LCD touch-screen for biometrics and other information, it’s an amazing bike.

The Factor 001 will come in a limited edition of a few hundred units and with a price tag of around $36,000. 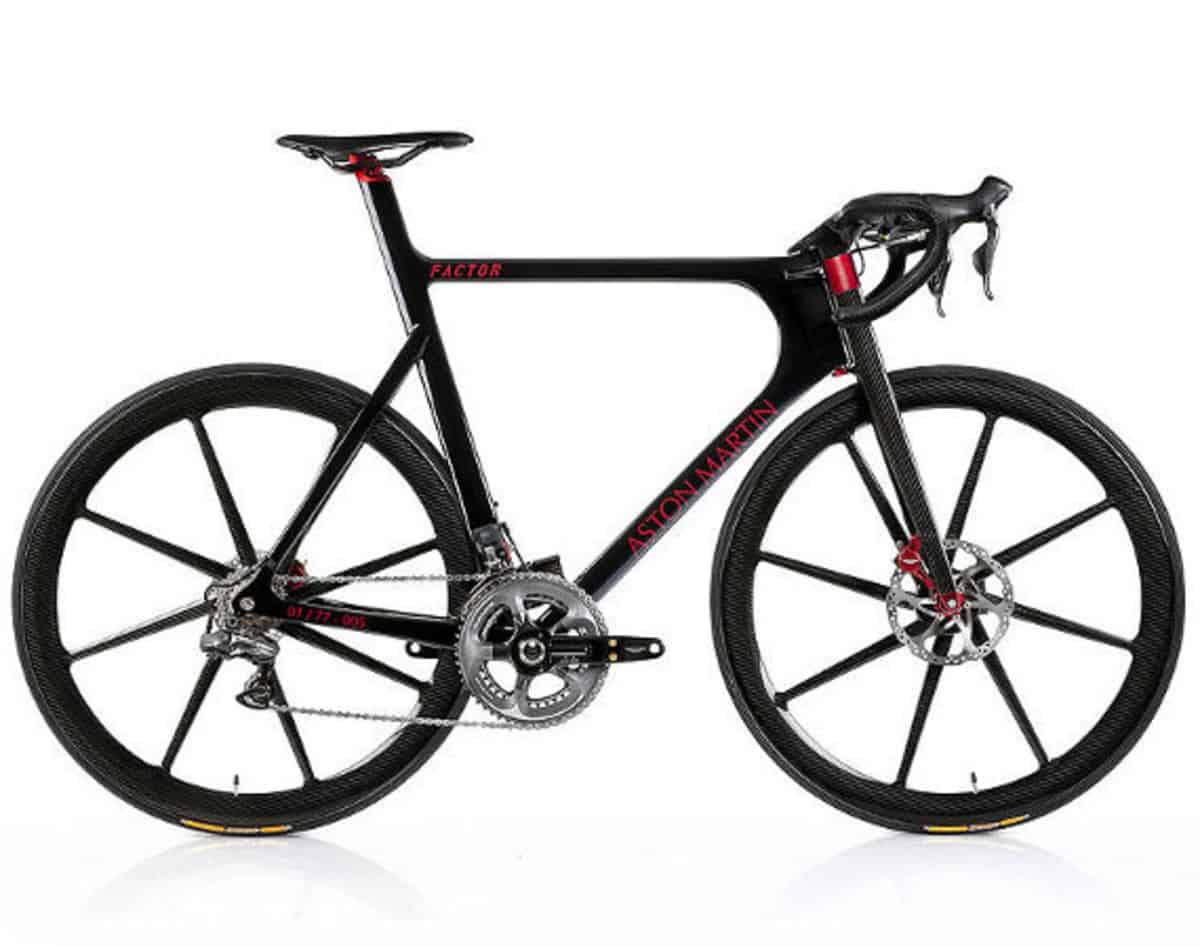 Another futuristic creation on two wheels is the Aston Martin One-77 Cycle. It comes with a huge price tag just shy of $40k, and with some of the most advanced technologies that could be fit on a bike. 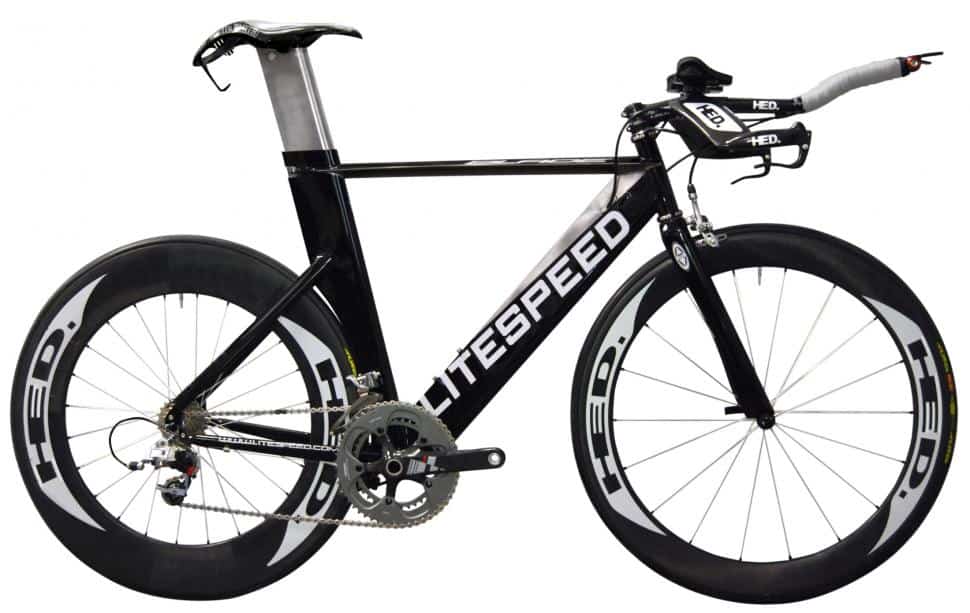 One of the most impressive aero bikes on the market, the Litespeed Blade is made from a titanium alloy and carbon fiber frame.

No other bike can match the Blade in speed and ride quality. With a futuristic design and only high end components, the price of $40,800 is probably justified. 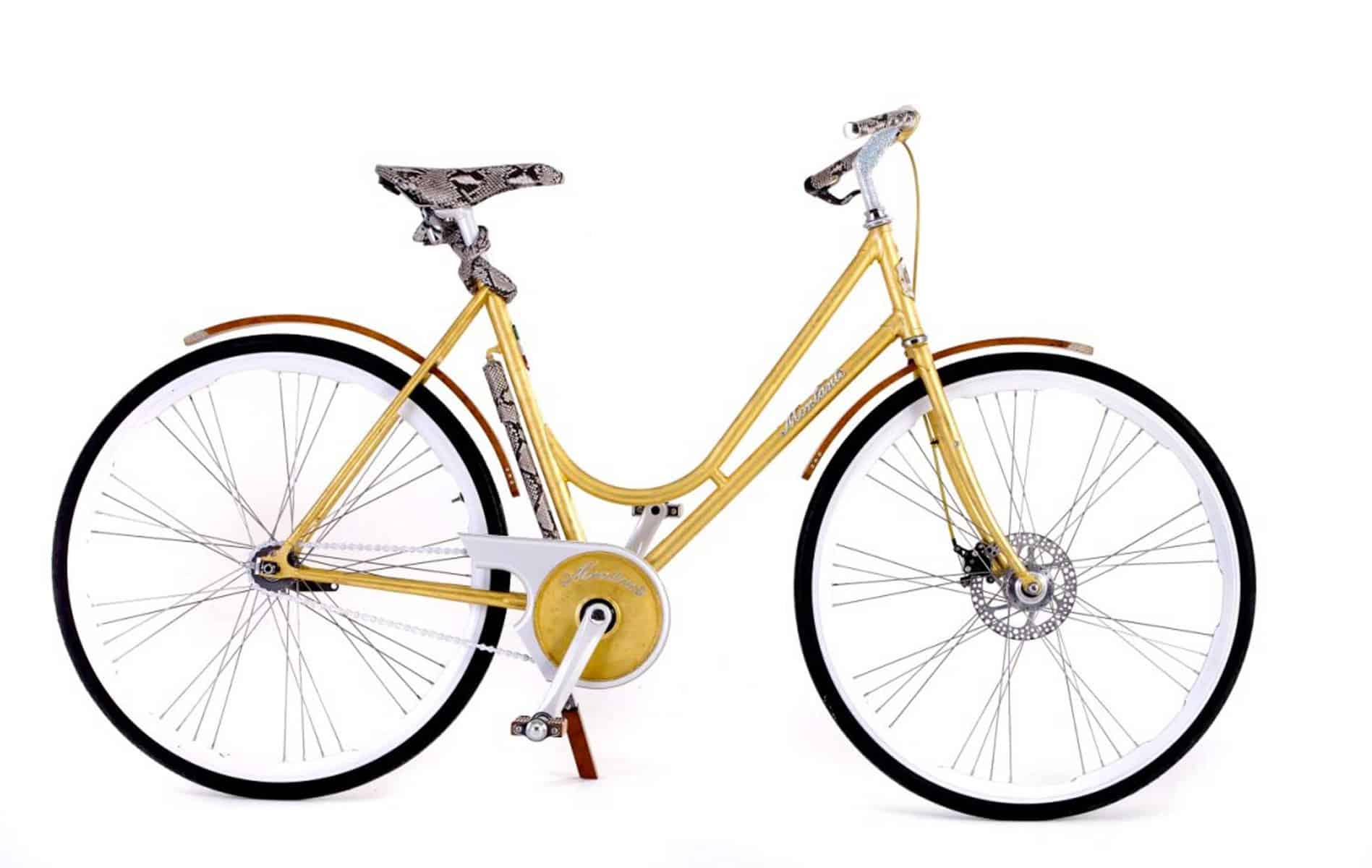 Moving into the realm of really beautiful and luxury bicycles, we have a bike from the Montante Luxury Gold Collection.

It’s a simple road bike that doesn’t impress in any technical way, but its elegant design with python leather finish saddle, 24 carat gold leaf coating, and no less than 11,000 Swarovski stones tells a whole different story. 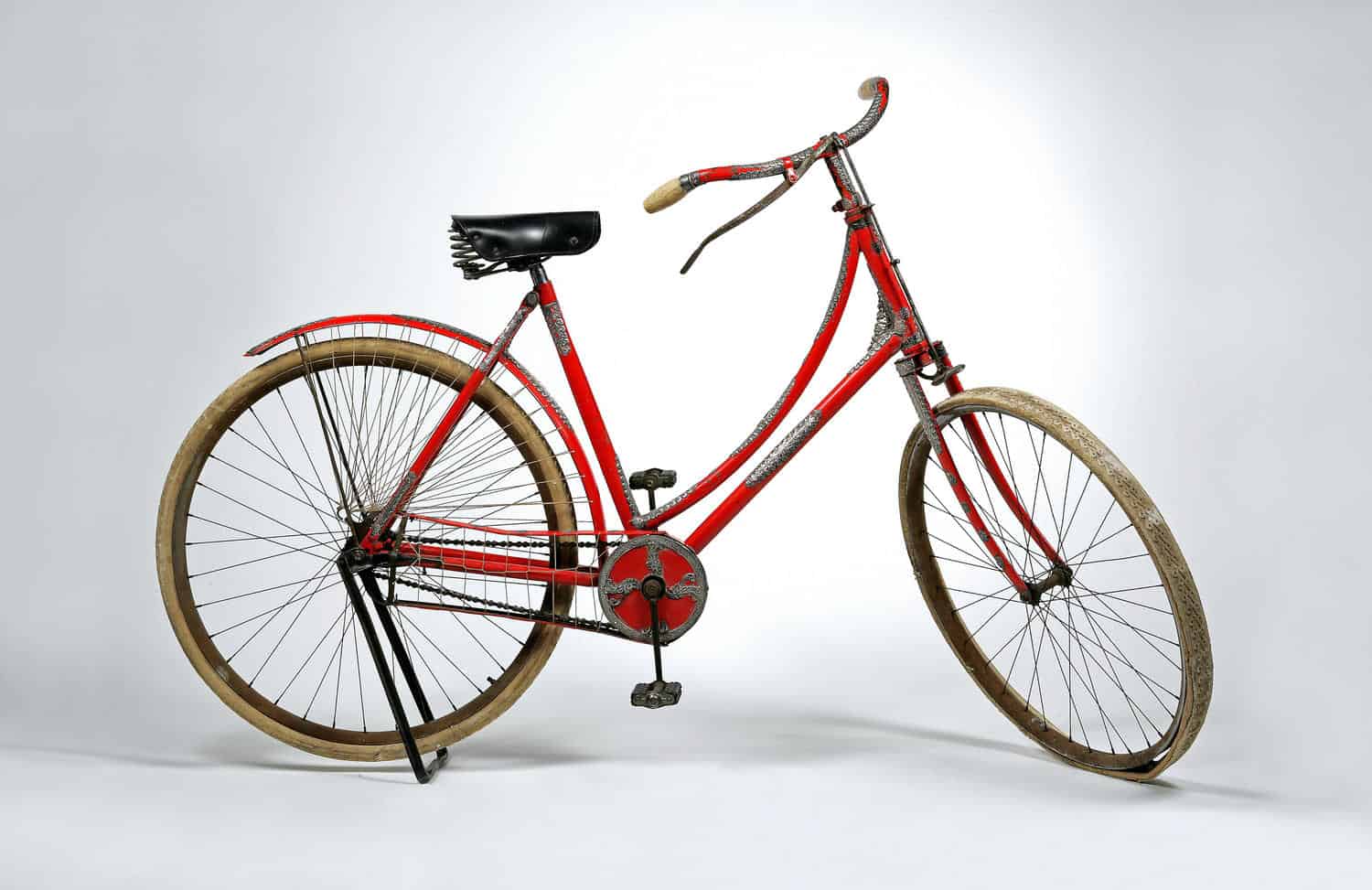 Tiffany & Co. is a jewelry company that should have nothing to do with bicycles. But they did manufacture a few bicycles, back in the late 1890s. Just a few of them, and now they’re super rare and extremely pricy.

One example was restored in 2008, auctioned by Bonhams, and valued at $57,000. There’s not much in terms of features, besides the Tiffany monogram, skirt guard, and the ivory grips. 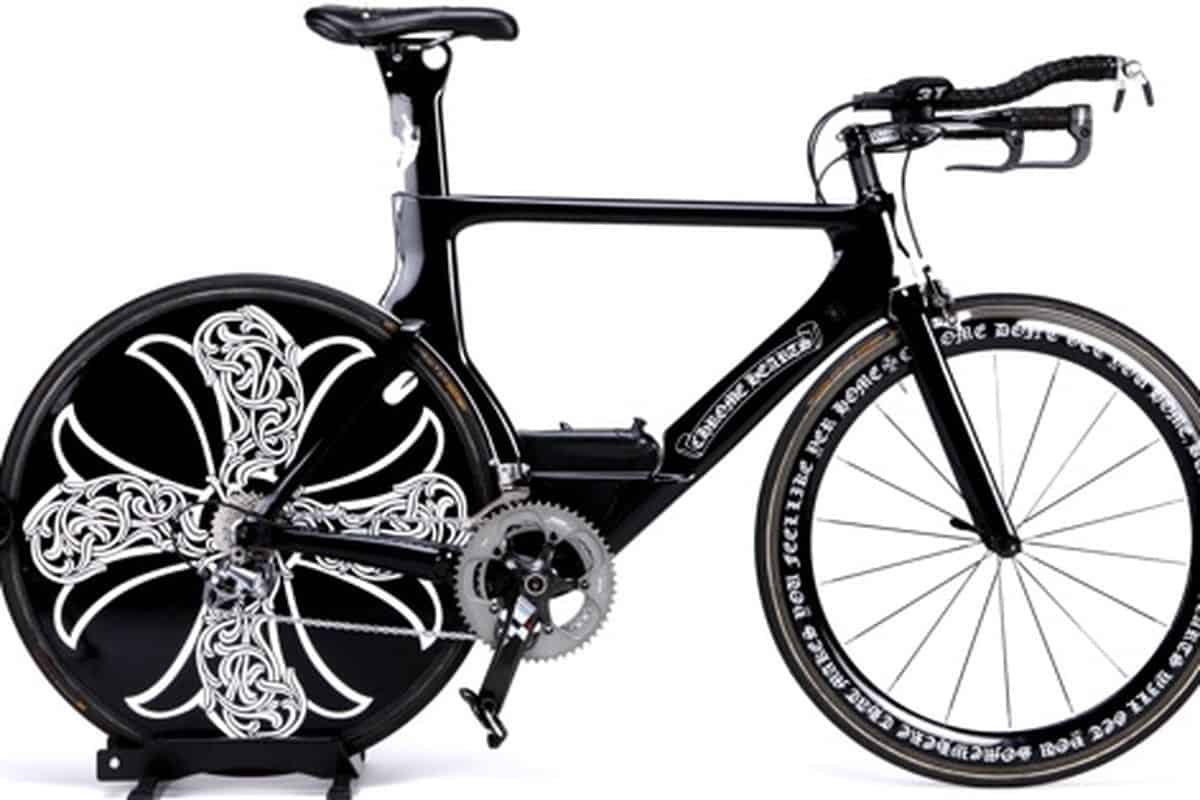 A design collaboration with Cervelo, one of the most reputable bicycle manufacturer in the world, and design brand Chrome Hearts, the Chrome Hearts x Cervelo is a stunning sight on two wheels.

Featuring Chrome Hearts graphics, precious metals, rhinestones, and leather, the bike is like nothing you’ve ever ridden before. 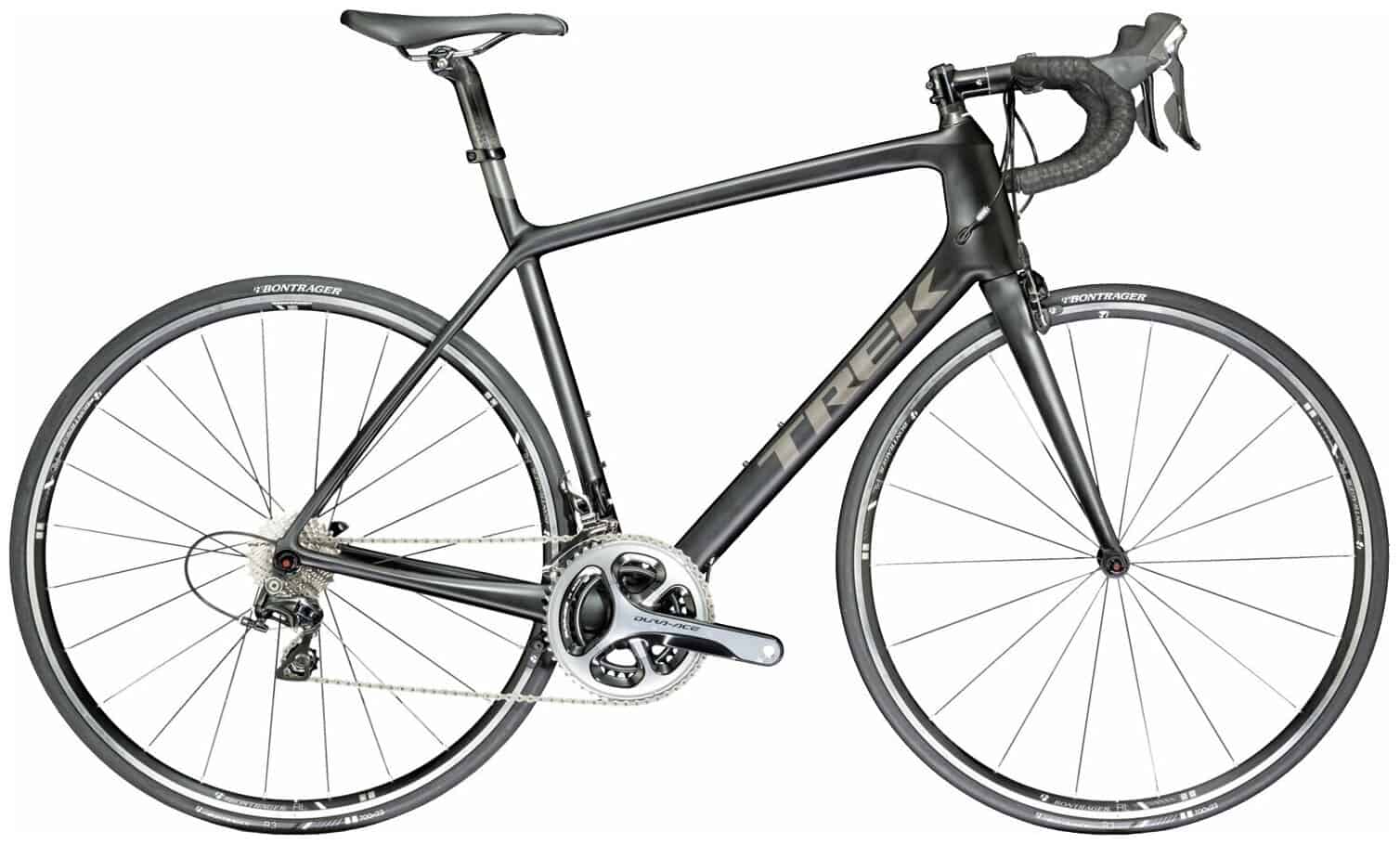 Coming from Trek, this is an unexpected bike. While it looks like an ordinary road bike, it’s actually a unique result of a collaboration between Nike, Trek Bikes, artist Lenny Futura, and jeweler Alan Friedman.

The bike was adorned with 100 white diamonds and seven manmade 1 karat diamonds on its head emblem. It came out after the Tour de France in 2005 and was sold for $75,000 at the Lance Armstrong Foundation annual Gala in the same year at New York. 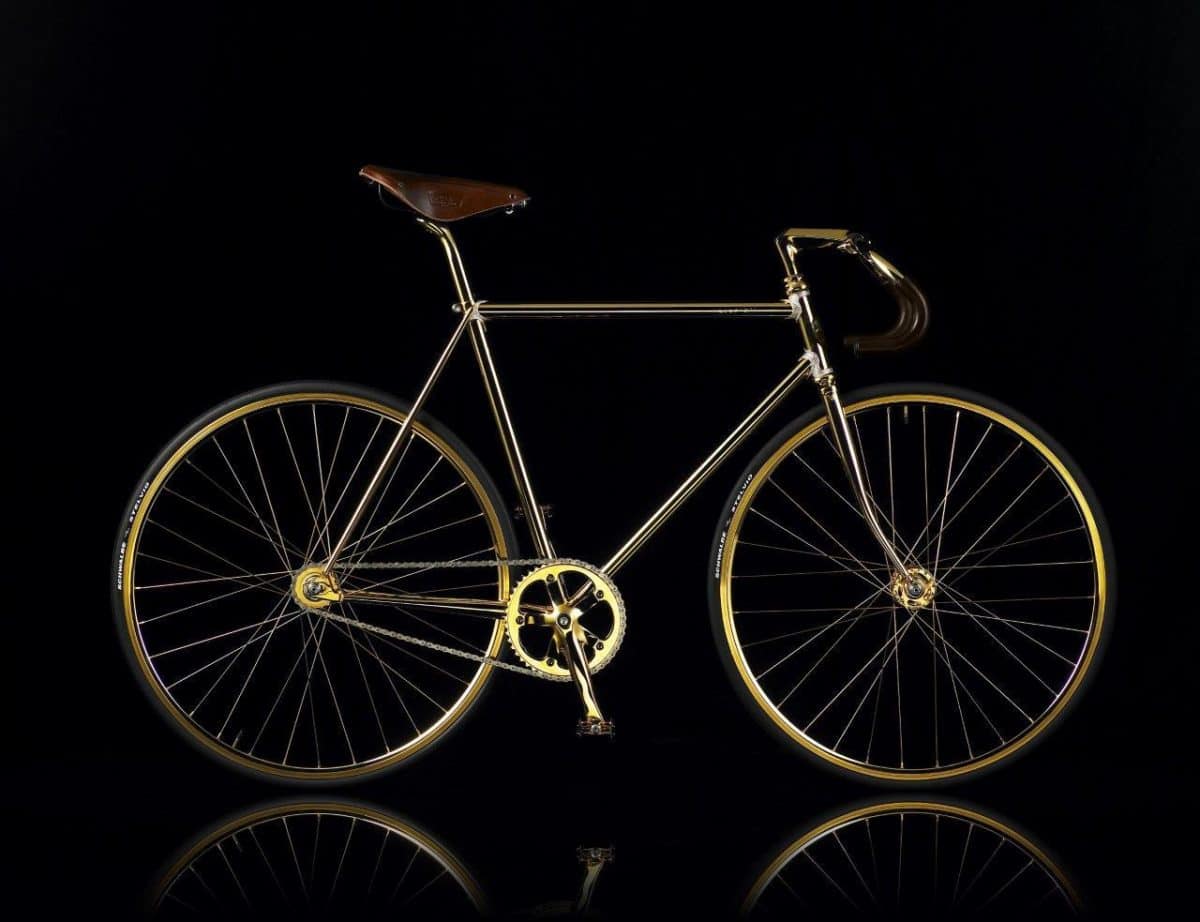 Moving further up the luxury scale, we’ve got the Aurumania Crystal Edition Gold Bike, a 24 karat gold plated bike. There are also no less than 600 Swarovski crystals covering the bike, so the Brooks saddle comes almost unnoticed here.

The bike has a traditional road bike design, but it will surely shine from very far away, no matter where you leave it. With a price of $114,400, saying it’s expensive is overrated anyway. 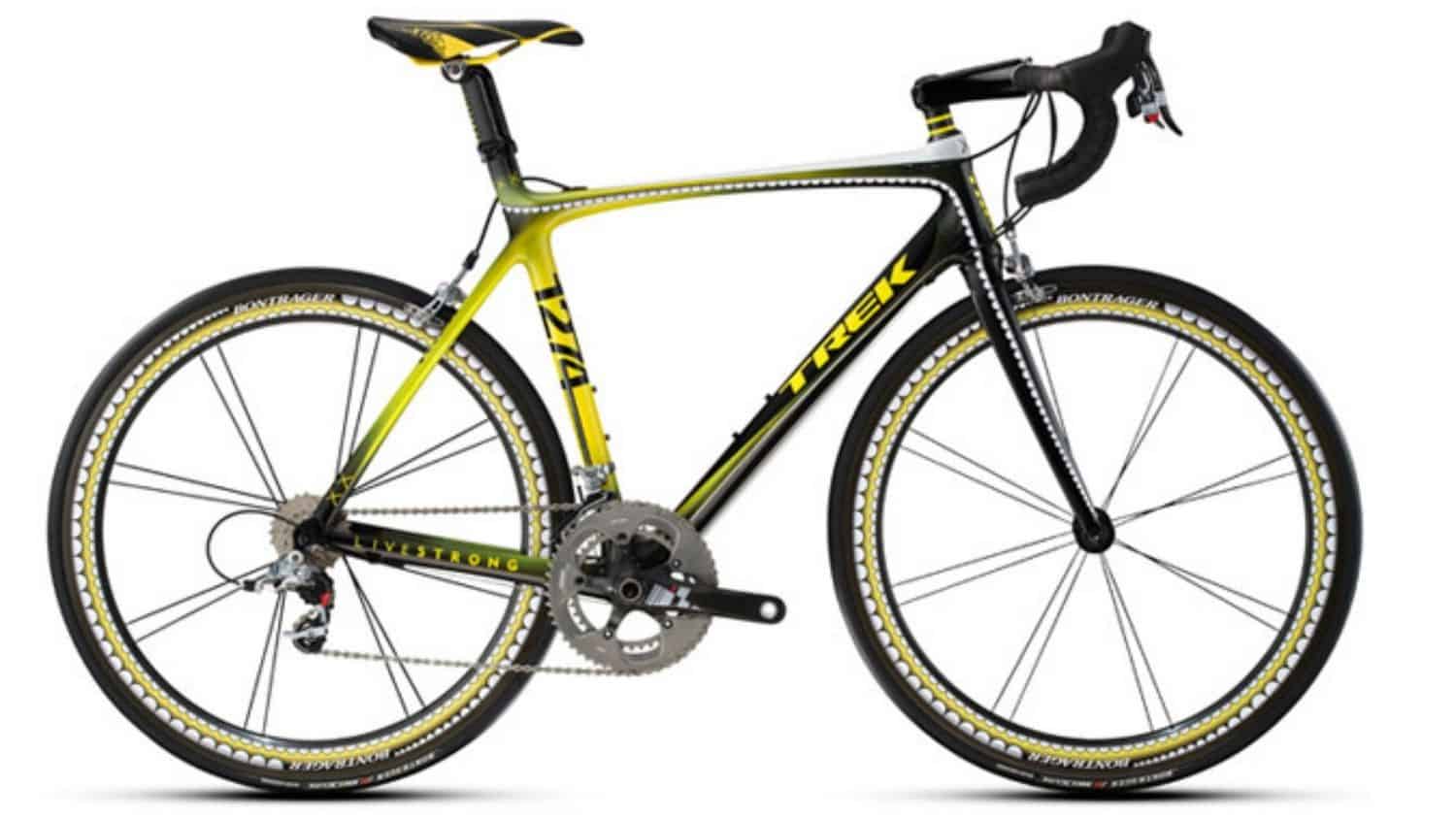 Graffiti artist Kaws collaborated with Trek Bikes to create this wonderful special edition Madone for none other than the Multiple Tour de France winner Lance Armstrong at the Vuelta Leon y Castilla Race. 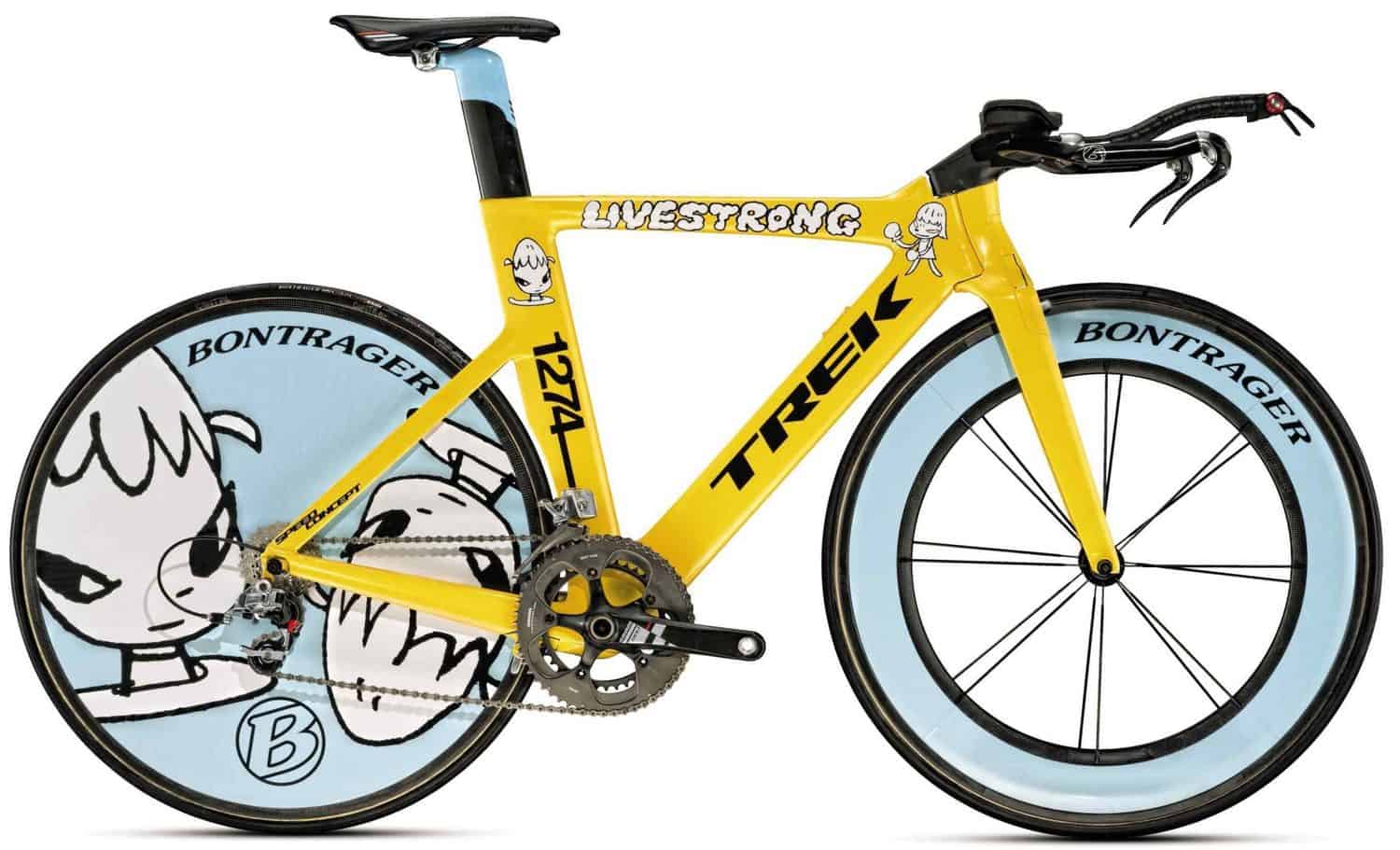 Another custom made bike for the same Lance Armstrong, is the Trek Yoshitomo Nara Speed Concept. It was created for a cancer awareness event that Armstrong participated in.

The bike was hand-painted by Japanese artist Yoshitomo Nara in a cartoon motif of children in boxing gloves and flying UFOs, with a Livestrong logo. The bike’s price is $200k. 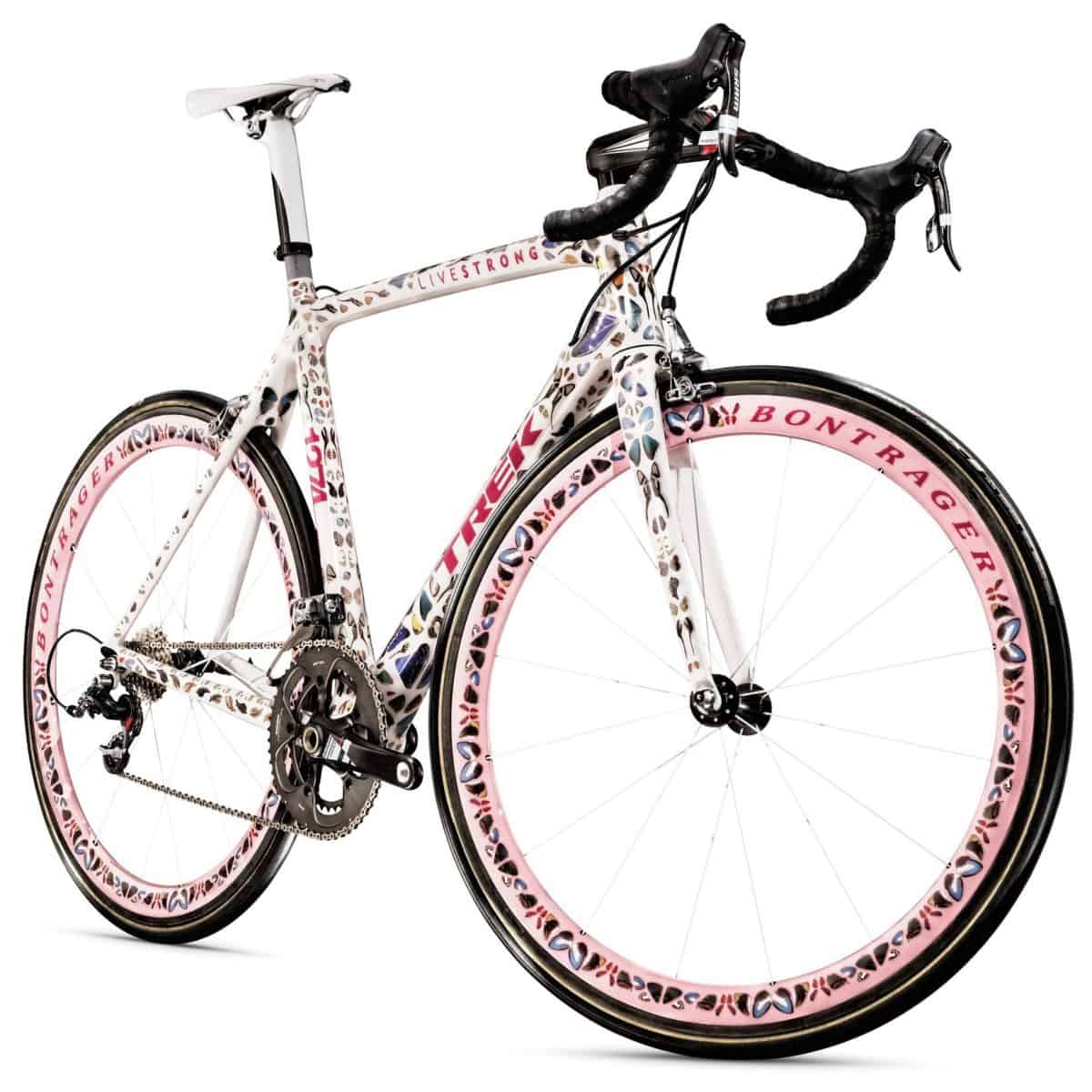 Another special edition of the Trek Madone, designed by British artist Damien Hirst, was ridden by Lance Armstrong into Paris during his comeback Tour de France back in 2009.

It features a beautiful design comprised of real butterflies lacquered on the frame and wheel rims which pushed the price of the bike to half a million dollars when it was sold at a charity auction. 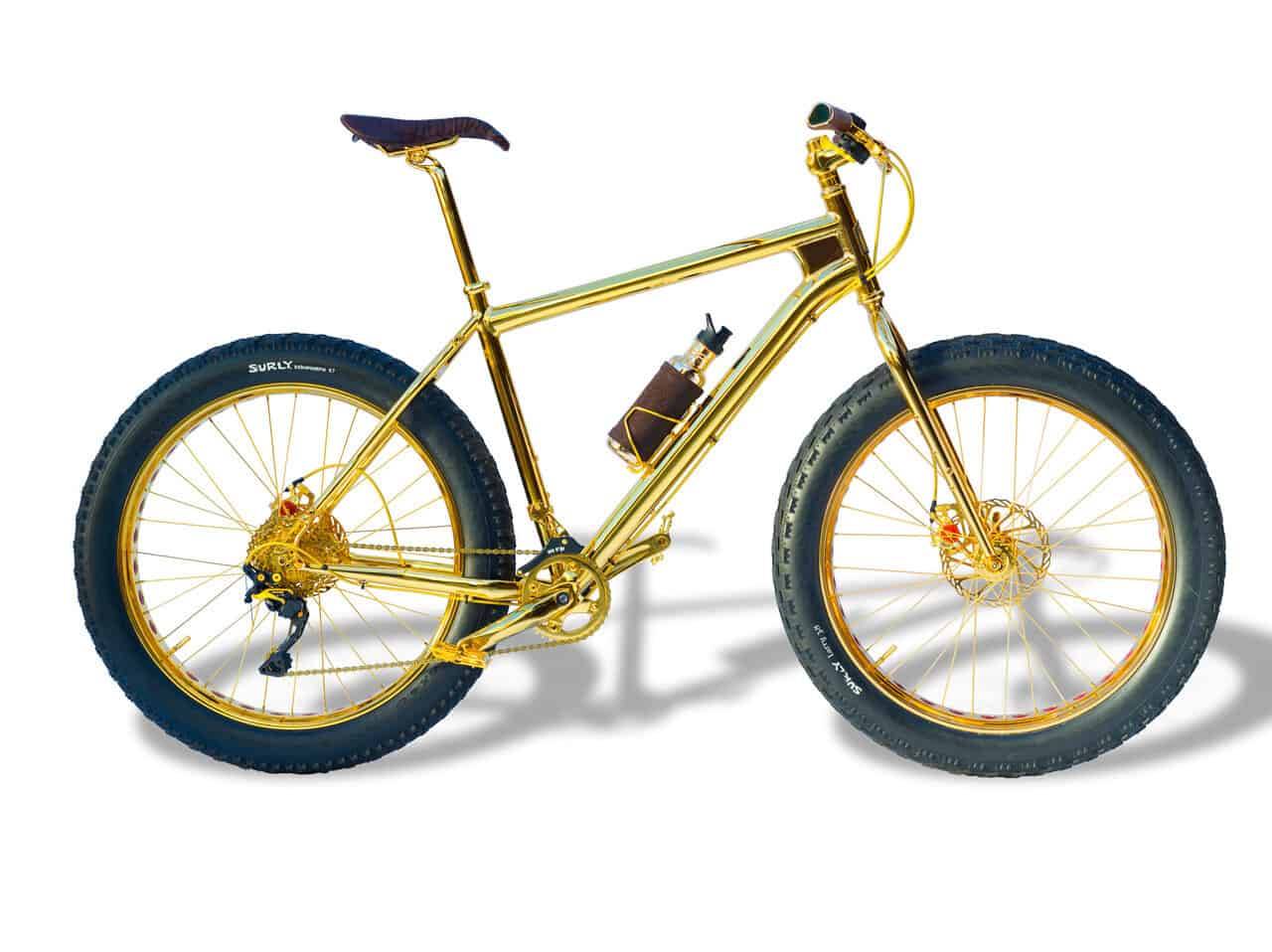 The House of Solid Gold 24K Gold Extreme Mountain Bike should come without any other description.

The opulent bike, made in a limited edition of 13 units only, features an alligator skin saddle, gold plated water bottle, and an astonishing emblem set of 600 black diamonds and 500 golden sapphires.

Too much for a mountain bike?

When technology can’t add anything anymore, rest assured there’s plenty of ways to make something more expensive, and bicycles haven’t escaped the trend.

From the most high end and high performance models you can find today to gold frames and diamond adorned components, butterflies on the rims and anything you can think of, there’s a bike for any kind of dreamer.

Tags:
Previous Article
The 25 Best Hotels & Resorts in Jamaica
Next Article
15 Tips on How to Keep your Jewelry Safe While Traveling