If you want to discover some of the world’s most fascinating places from a unique perspective, traveling aboard a luxury train will make the entire experience even more special, with all the right amenities to make you feel comfortable, delicious food and drinks, brilliant staff and guides, and many other interesting activities on offer.

From the vastness of Siberia or the Australian outback, to the beauties of the African safari and the magical palaces of India, these incredible trains promise one-of-a-kind adventures that will surpass all your expectations. With routes that go far beyond your imagination, and a magical mix of elegance and breathtaking views, these are the top 10 most luxurious trains in the world right now.

Take a step back in time and rediscover the art of elegant traveling. 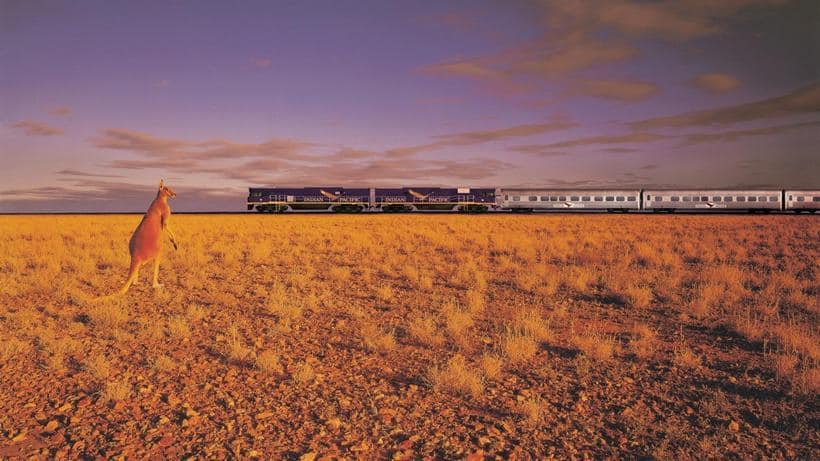 This iconic passenger rail service goes from Sydney, on the Pacific Ocean, all the way to the other side of Australia, in Perth, on the Indian Ocean, making it one of the few transcontinental trains in the world, and covering an incredible total distance of 4,352 km. The Indian Pacific train made its first journey in 1970 and it’s been running ever since, going through the longest stretch of dead-straight track in the world, which has a distance of 478 km. 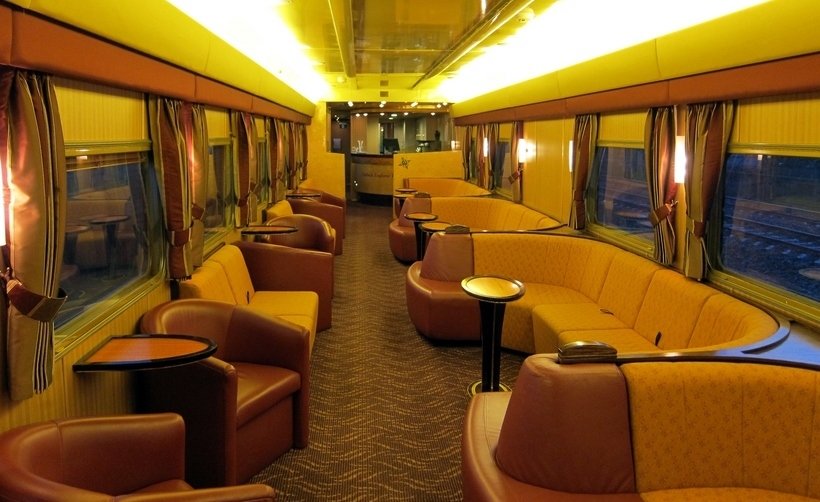 If you go all the way, a trip from Sydney to Perth takes exactly 65 hours, but you have four classes to choose from, branded as Red Service Day-Nighter, Sleeper, Gold Service and Platinum. The Platinum option was introduced in 2008 as a premium class, and it will cost you a cool $1,198 per night, but you’ll get in-cabin breakfast, access to the restaurant and lounge, as well as a full-size en suite with shower, toilet and vanity. 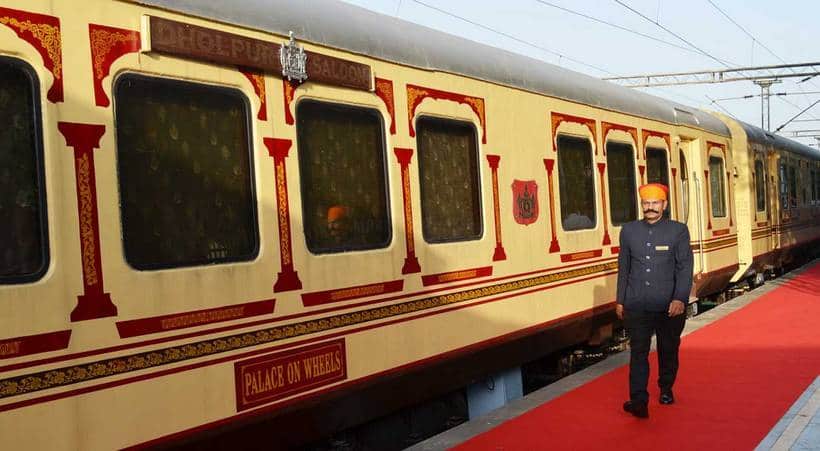 This acclaimed Indian train service was re-launched back in 2009 after an extensive refurbishment, with a new décor, a slightly different route and a refined dining experience. The train before you comes with 23 gorgeous coaches, able to accommodate up to 104 guests, each of these cars being named after a former Rajput state, and with four cabins featuring luxurious amenities and even Wi-Fi. 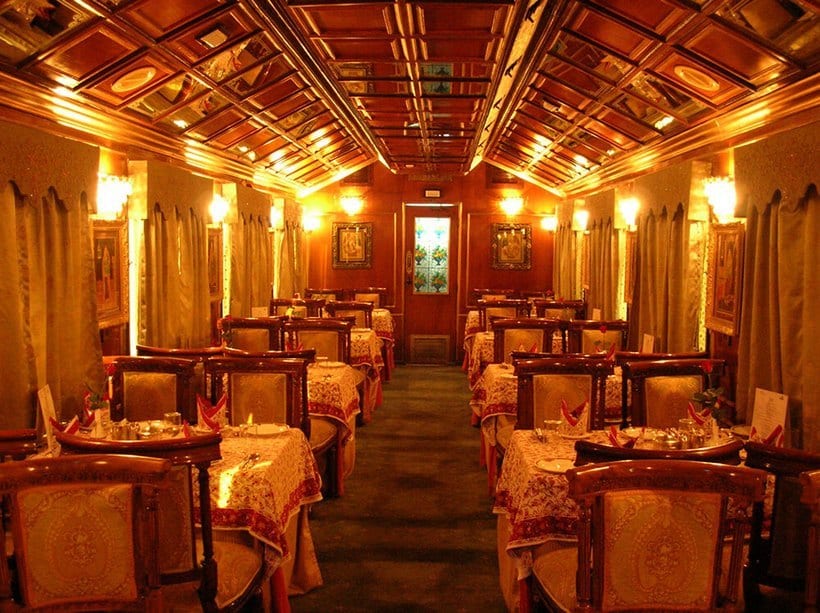 The saloons are beyond stunning, highlighting the cultural aesthetic of each state, through the furniture, paintings and decorative elements, which were imagined by the reputed interior designer Monica Khanna. The Palace on Wheels features two lovely restaurants, one bar with a lounge and even a spa, so there are plenty of things to do on board. The trip takes eight days with seven nights and goes from New Delhi through the country and then it returns to the capital. The price for the entire trip, with all the luxuries, is $5,390. 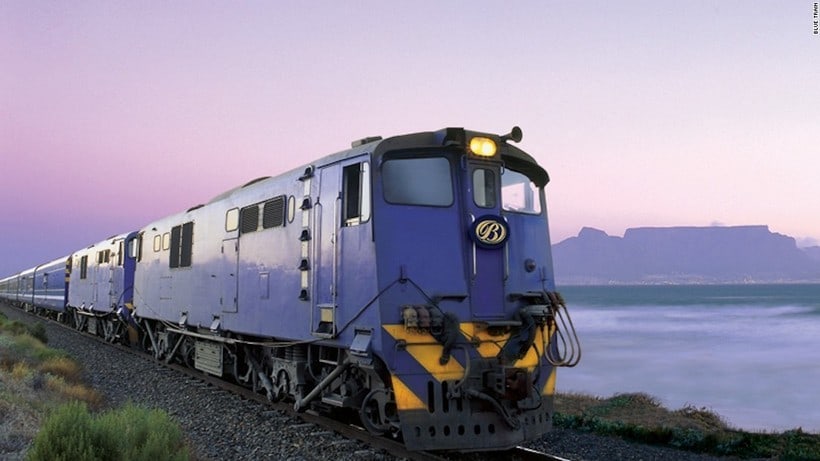 As you can see from this photo, the Blue Train is.. well it’s blue. It connects two of South Africa’s most important cities, Cape Town and Pretoria, covering a total distance of around 1,600 km, and it’s also one of the most luxurious trains in the world, providing you butler service, two charming lounge cars (one for smokers the other for non-smokers), an observation car, plus fully carpeted soundproof compartments, with your own en-suite. 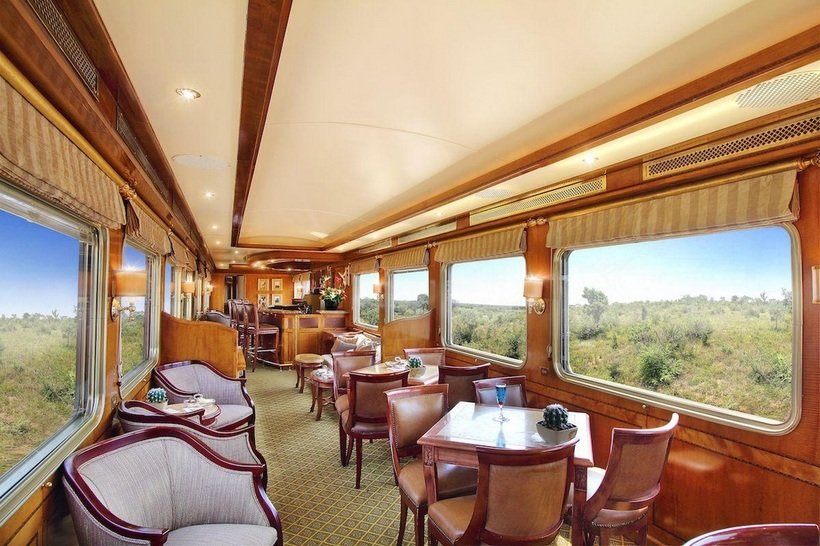 Overall, the services on the Blue Train could be easily compared to those of a five-star hotel. The entire trip from Cape Town to Pretoria will take 27 hours and will set you back around $1,217 per night. This luxury train is apparently able to accommodate either 52 guests or 80 guests. 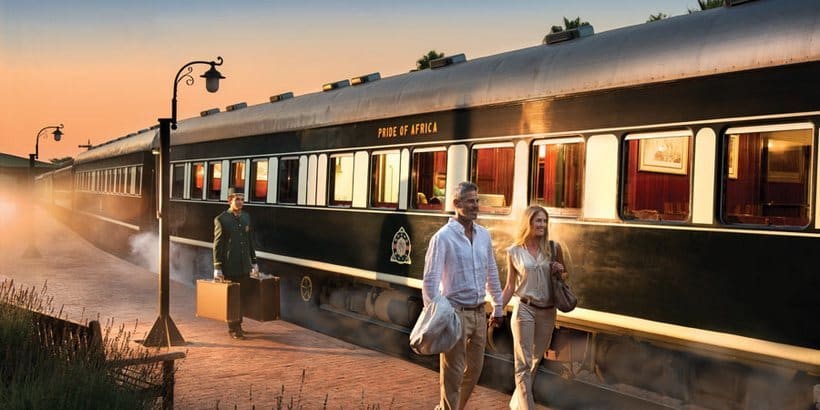 We’re moving on from Pretoria, South Africa, to Zimbabwe, Zambia and Tanzania, as this magical train connects all these beautiful countries, covering a total distance of around 2,000 miles in around nine days. The Pride of Africa train service is run by a family-owned company called Rovos Rail, that was started back in 1989, and offers many other unique journeys through Africa. 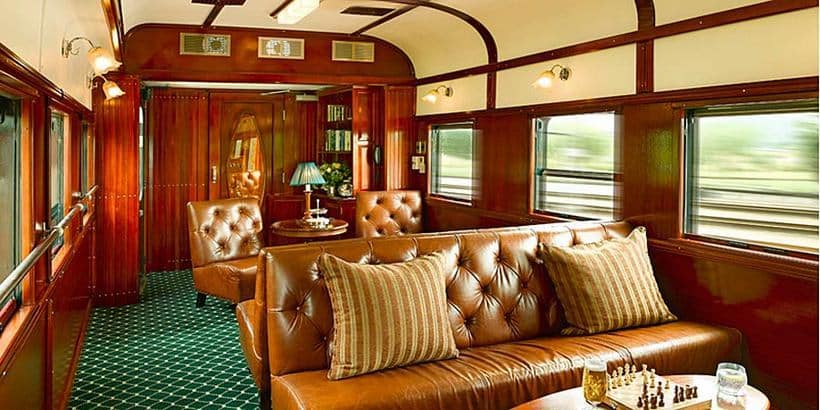 But this luxurious train ride is their best offering by far, going through the gorgeous African safari, and providing you with all the right amenities to make your journey truly special, within the royal suites, the dining cars or the smoking lounge. The Pride of Africa train has a capacity of 72 passengers and it will cost you $2,075 per night. 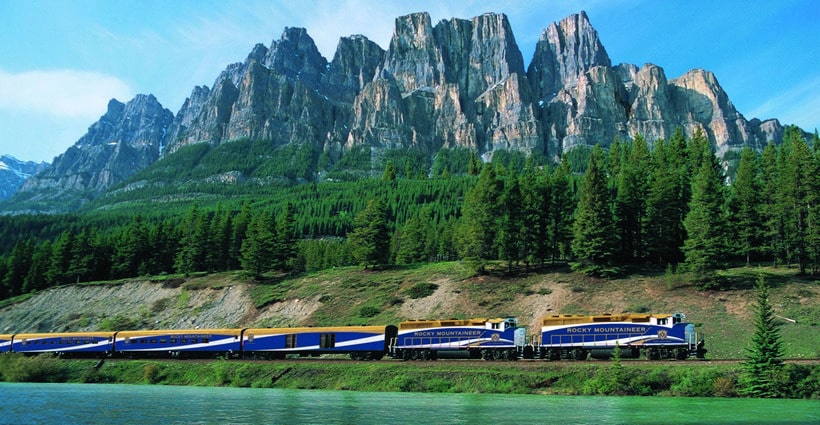 In case you don’t know this yet, Rocky Mountaineer is actually a Canadian rail-tour company, which operates on four rail routes that go through British Columbia, Alberta, and also the US state of Washington. Founded in 1990, this family owned business has quickly become the largest privately owned tourist train company in the world, serving more than 1.7 million guests on all its routes as we speak. 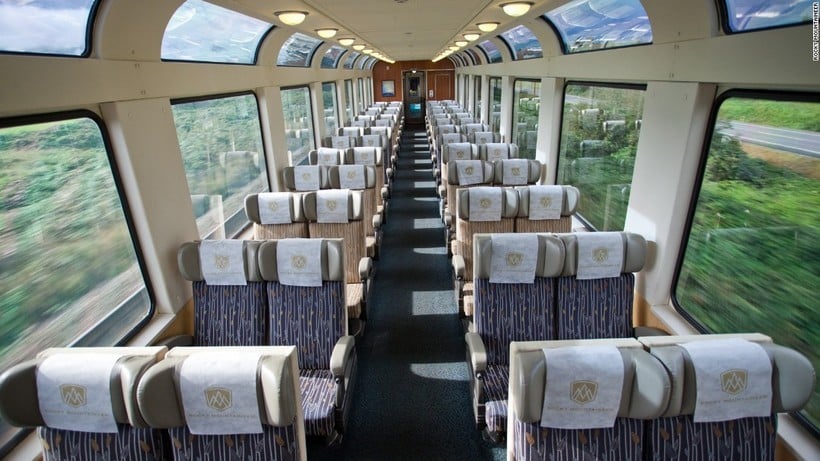 All Rocky Mountaineer trains are equally gorgeous, that’s why the company has won the World’s Leading Travel Experience by Train award seven times, but you have to see them with your own eyes. The trains travel only during daytime to allow the passengers to see everything they want and the price depends on the route, but it’s somewhere around $1,600 per night; an entire journey could take up to 12 days. 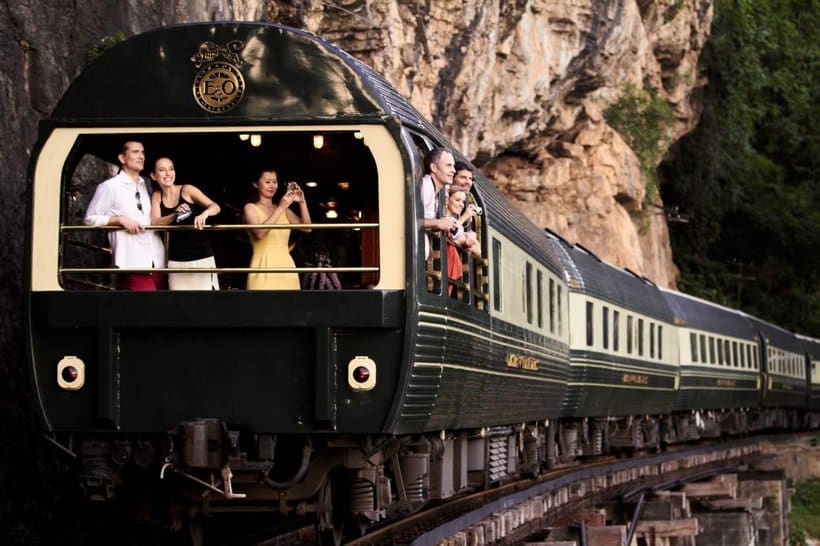 Operated by Belmond Ltd, a company that’s synonymous with luxury and excellence, this lovely train goes through Singapore, Malaysia and Thailand, in a wonderful journey which takes four days and three nights. The Eastern & Oriental Express runs from Singapore’s Woodlands to Hua Lamphon in Bangkok, stopping at Kuala Lumpur, Butterworth, and Kanchanaburi on the way. 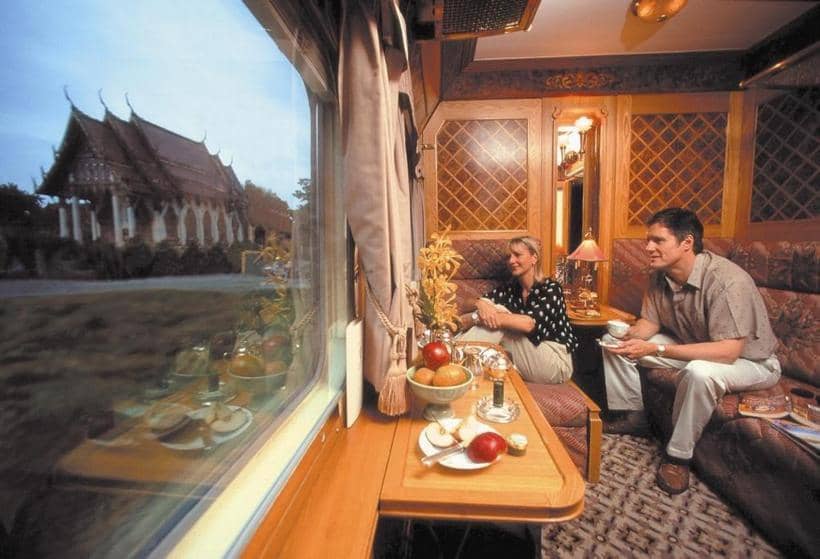 The luxurious train before you was built back in 1972 in Japan, but its interior has been updated several times for more comfort as the years went by. There are two mesmerizing dining cars, two bar cars, a library car, a saloon car and a lovely, open-air, observation car that will make your journey through South-East Asia totally special. The entire trip from Bangkok to Singapore costs around $2,690.

Boasting a timeless elegance, this private luxury train usually goes from London to Venice, but it also connects some of Europe’s most important destinations from time to time. The classical London to Venice route is served once or twice a week, with stops in Paris, Zurich, Innsbruck and Verona, but a few times a year the Venice Simplon Orient Express will also go to Istanbul via Budapest and Bucharest, or to Rome, Berlin, Stockholm or Copenhagen. 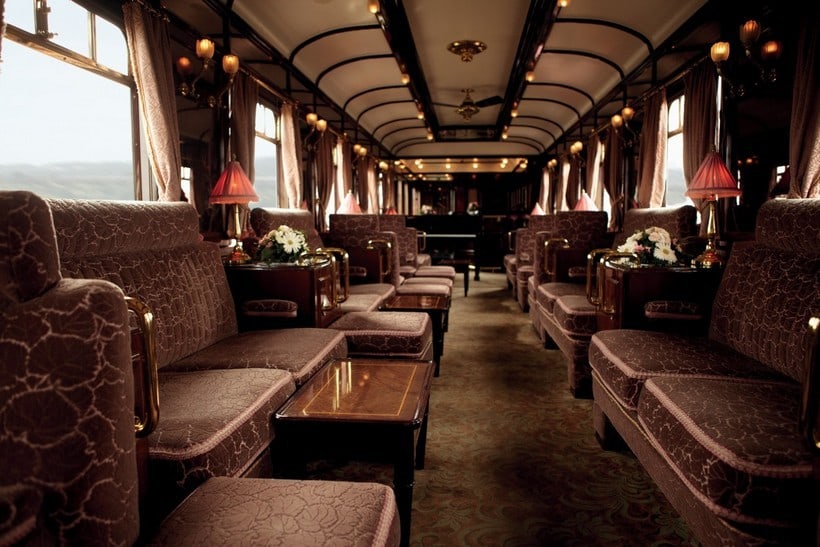 Most of the carriages of the VSOE date back from the 1920s or the 1930s, to give you an authentic and quite unique experience, that will run for six days if you go the classical route, costing you a cool $1,900 per night. Also operated by Belmond Ltd, this renowned luxury train takes train rides to the next level, with lavish guest accommodations, amazing food, world-class service and bespoke amenities.

The Royal Scotsman is a gorgeous train, to stay the least. A small venue that could host only 36 passengers, this amazing train will take you on an unforgettable journey through the Highlands, allowing you to see some of Scotland’s most important landmarks along the way, in unparalleled style and five-star luxury. The train is also operated by Belmond – no surprise here – and it’s made of ten incredible cars: two dining cars, five state cars, one crew car, a lovely observation car and even a stunning SPA car.

Traveling through blissful landscapes of pine-clad mountains and mirror-still lochs, the Royal Scotsman will also impress you with its world-class cuisine and thrilling excursions offered each day. Your luxurious private cabin will make you want to say in all day long, but the observation car, which was converted from a Pullman Kitchen Car, and the most unique spa in Scotland, will make your days on board totally enjoyable. The price for a trip on this lavish train starts from $2,216 per night. 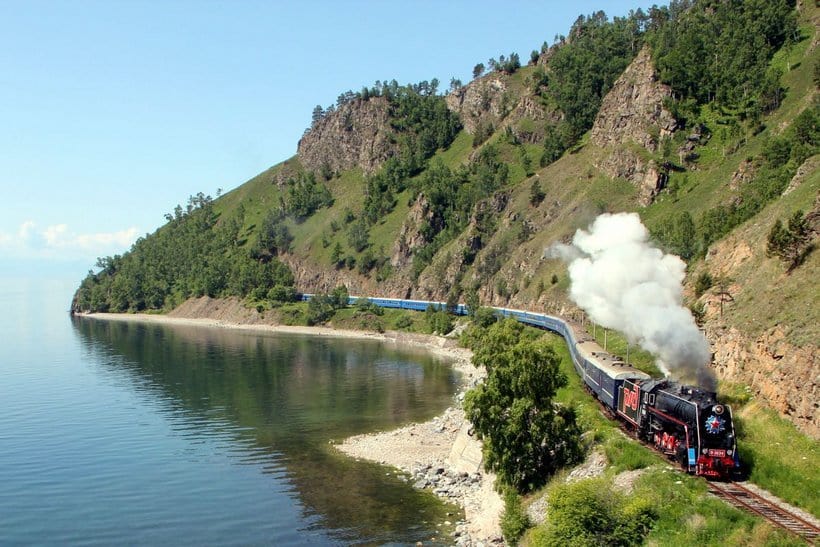 Prepare for the trip of a lifetime, through the vastness of Siberia. The Golden Eagle Trans-Siberian Express will offer you undoubtedly the world’s greatest journey by train, an epic 15-day trip spanning two continents and seven different time zones! The famous Trans-Siberian railway runs like a steel ribbon across the mysterious Russia, going over the Urals to connect the west, in Moscow, to the East, in Vladivostok. 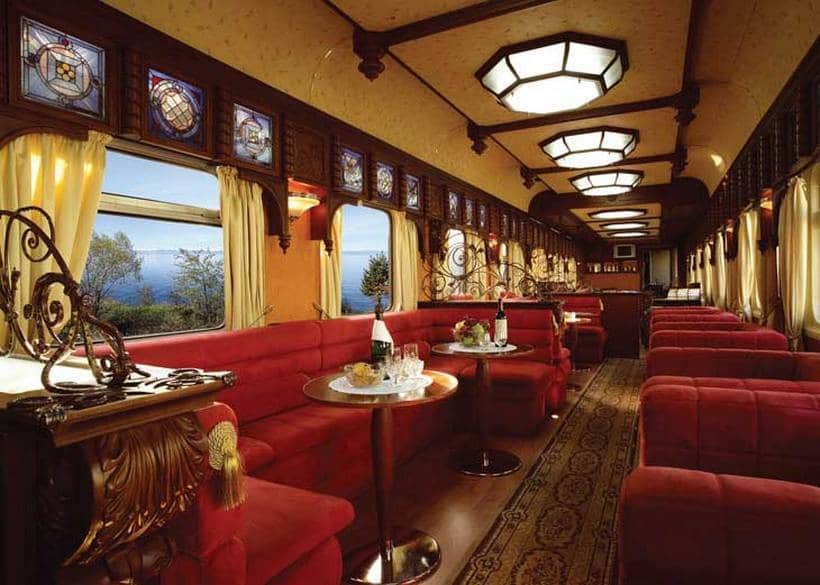 You’ll also make a stop in Mongolia and its capital Ulaan Bataar, and you’ll discover many majestic locations along the route, like the massive Lake Baikal. In terms of service, dining and accommodations, you can expect nothing but the best aboard this luxurious train, that comes with a beautifully appointed bar & lounge car, two lovely restaurant cars, and many other goodies. Prices for a trip with this luxurious train are well over $2,000 per night. 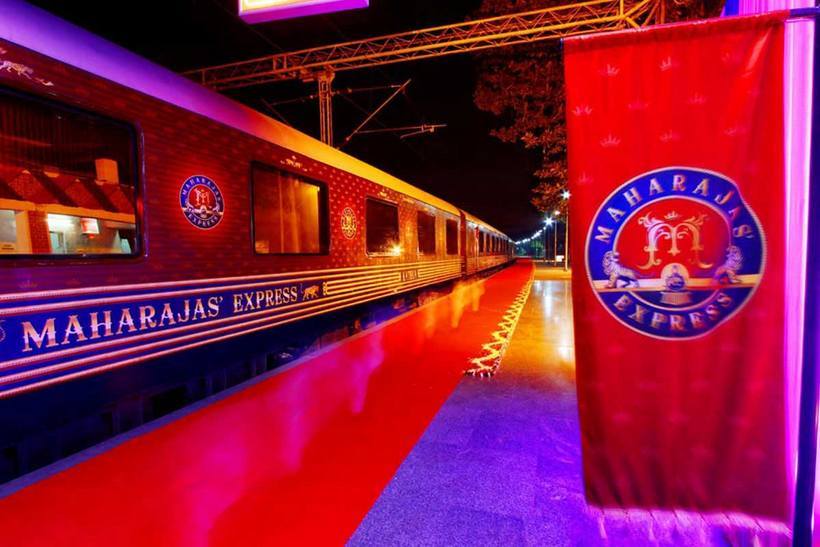 Once upon a time India used to be the land of maharajas, a magical place of kingdoms and kings, where cultures flourished and developed side by side – that’s why we think this luxurious train couldn’t get a better name. The Maharajas’ Express has been specially designed to offer you a glimpse into this rich heritage and culture of India, with 5 amazing rail journeys, covering more than 12 awesome destinations across North-West and Central India, between October and April. 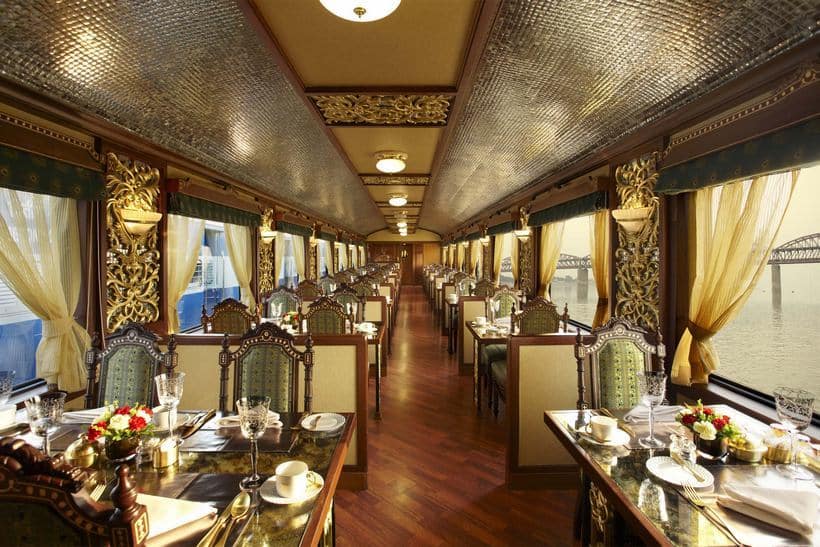 Launched in 2010, the Maharajas’ Express was already voted “The World’s Leading Luxury Train” five times in a row, and it probably won’t stop there. This mesmerizing train aims to redefine executive travel, with 23 gorgeous carriages: 14 exquisite guest cars, with a total passengers capacity of 84, two elegant dining cars, a beautiful lounge car called the Rajah Club with a private bar, a dedicated bar car, plus generator and store cars.

With prices starting from $2,910 for a cabin ticket on a trip exploring the Treasures of India, and going all the way up to $23,700 for a journey exploring the Heritage of India in a presidential suite, the Maharajas’ Express is the most luxury train in the world.