The Top 10 Most Expensive Burgers in the World 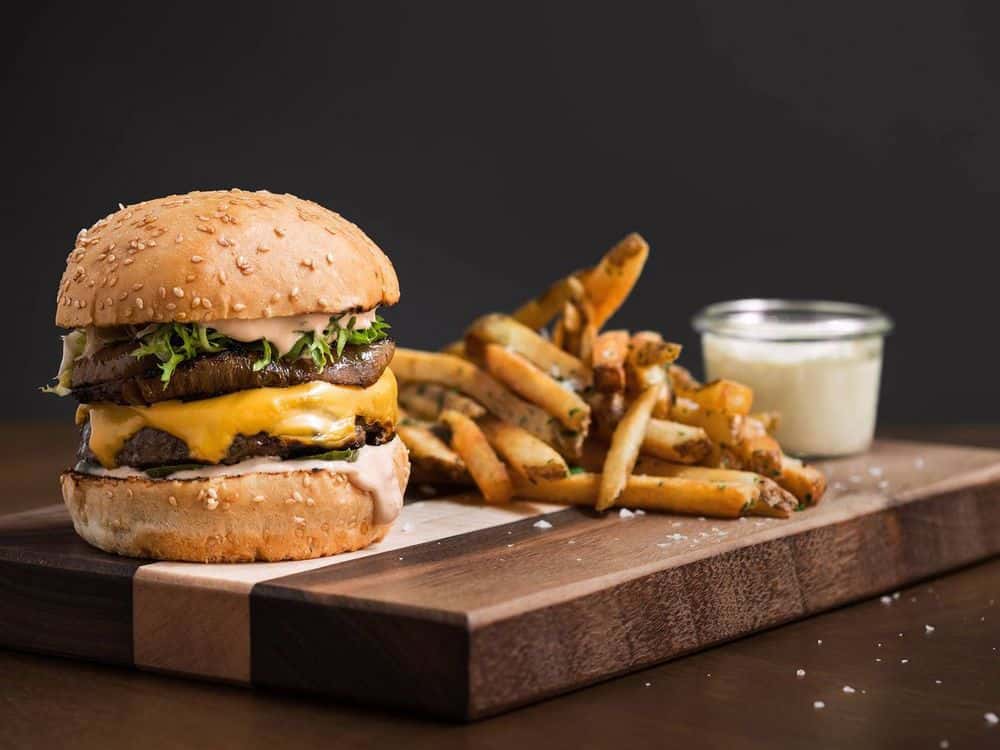 An iconic meal in most of the fast foods around the world, the burger has emerged from the needs of a fast changing society due to industrialization, and the demand of working people for some food that can be found and consumed on the street after rushing out the door to the workplace.

Though there is a lot of controversy about the invention of the burger, its origins seem to be more unclear. Nevertheless, today the burger is known as the king of fast food and almost everybody loves it.

While in the beginning it was just a simple combination of bread, meat and salad, nowadays there are restaurants that have transformed the burger into a delightful culinary art. And lots of people all around the world who would love to taste some of that art no matter the price.

Speaking of the price, if you think that the $15 burger you ate last night in that high-class pub in New York was too expensive, take a look at The Top 10 Most Expensive Burgers in the World: 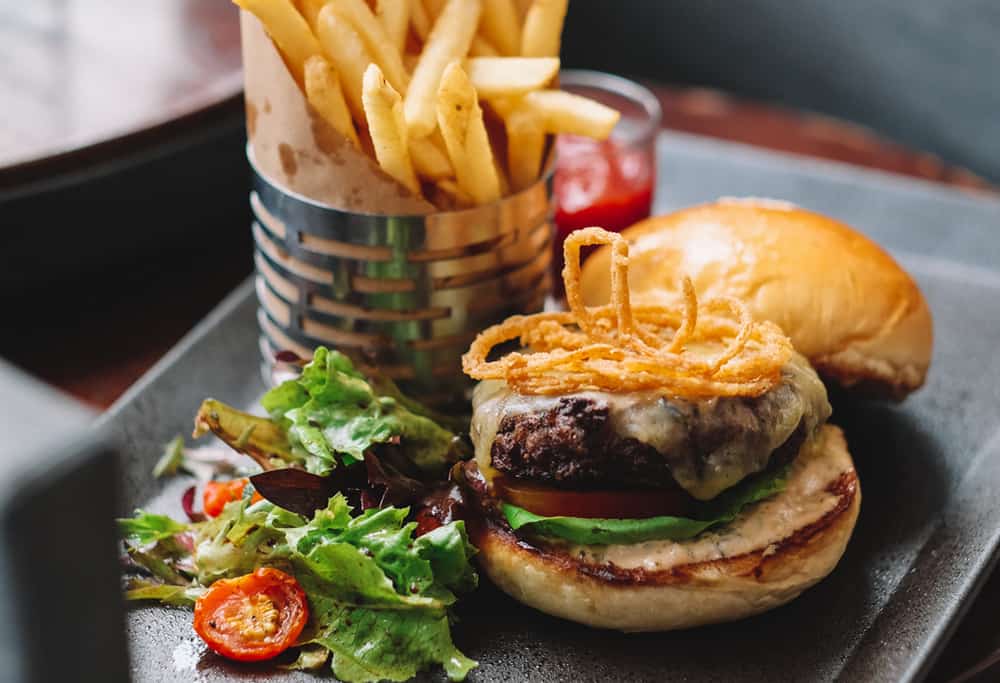 When you think of a burger, America might be the first country that comes to mind, but that’s just a stereotype now, because you can find burgers everywhere, even in countries like Indonesia, for example.

Served at the Four Seasons Hotel in Jakarta, the idea of the Million Rupiah Hamburger was to bring together the tastes of the East and the West. Japanese Kobe beef, Italian portobello mushrooms, wasabi mayonnaise and a home made onion-wheat bun plus French fries, French foie gras and an Asian pear are the ingredients that will delight your senses if you decide to try the burger. You shouldn’t forget about a glass of wine and of course, the $110 it costs. 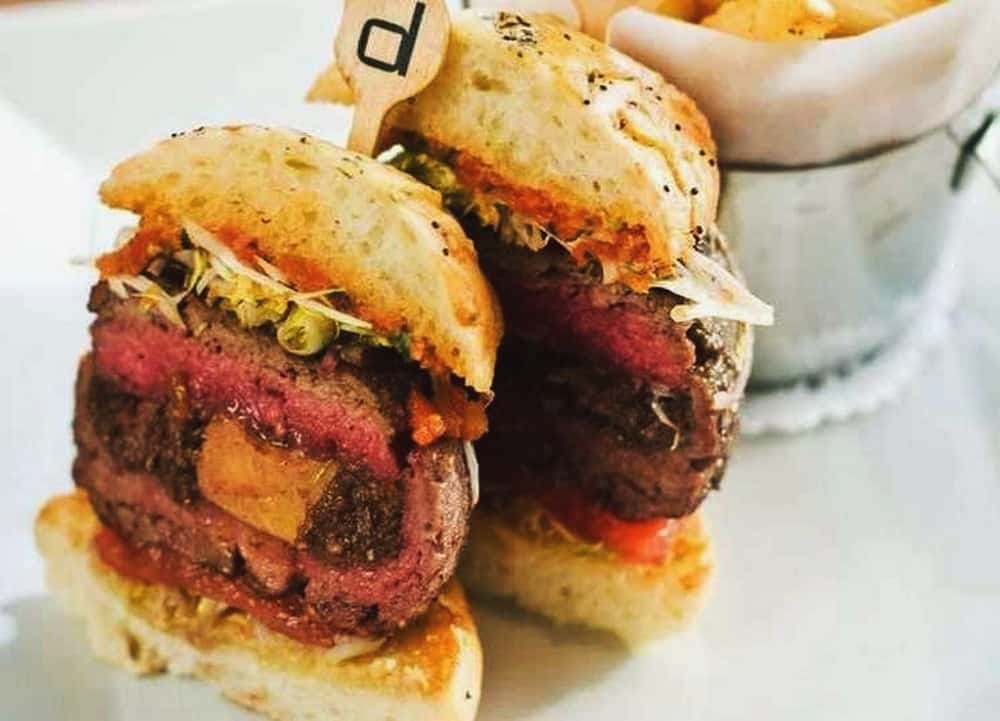 Born in 2007 at the DB Bistro Moderne in New York City after an idea of famous chef Daniel Boulud, the DB Royale Double Truffle Burger will make you happy with ingredients like root vegetables, foie gras, red wine-braised ribs and fresh black truffle.

In addition to that you’ll also get parmesan and poppy seeds and as well ketchup, an interesting mix of horseradish and tomato sauce. The price tag for such an impressive mix of tastes is a great $120. 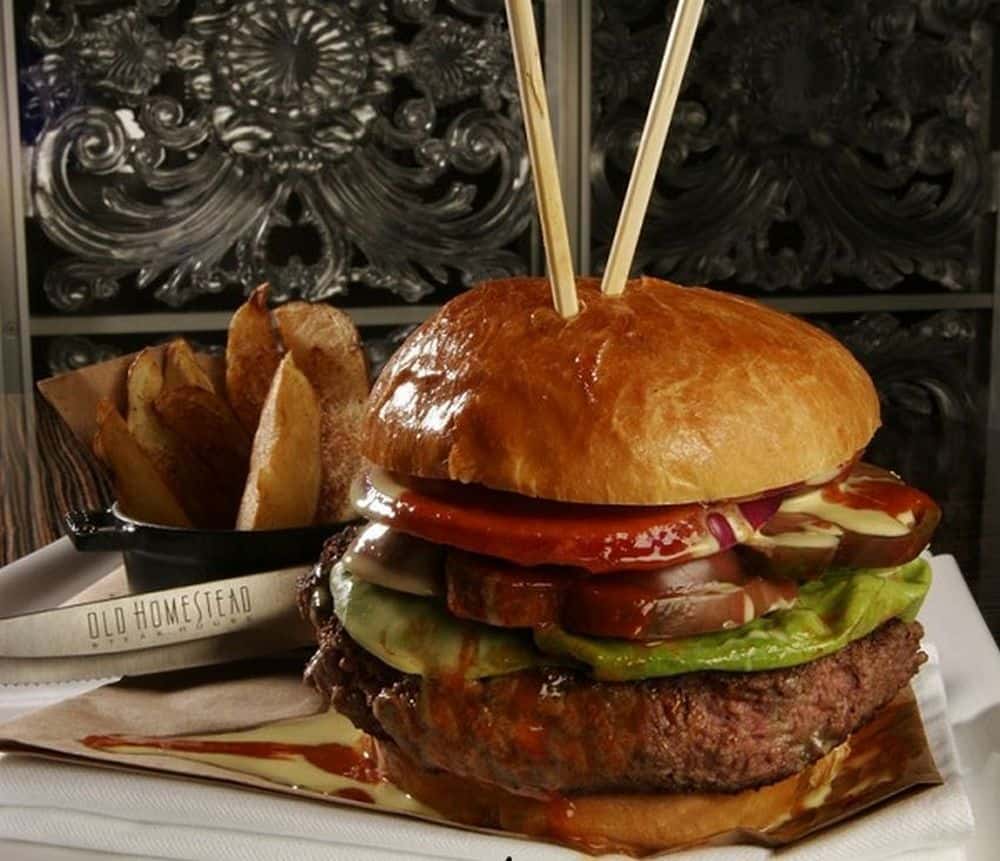 An interesting mix of three different kinds of beef, the Argentine beef, the Japanese Wagyu and the American Prime, hence its name, the Tri-Beef Burger was first created in 2006 in Boca Raton, Florida at the Old Homestead Steakhouse.

The ketchup it comes with is an intriguing addition since some of the ingredients it contains are champagne and truffles. On the side you’ll also have French fries, a nice drink and a bill of $125. 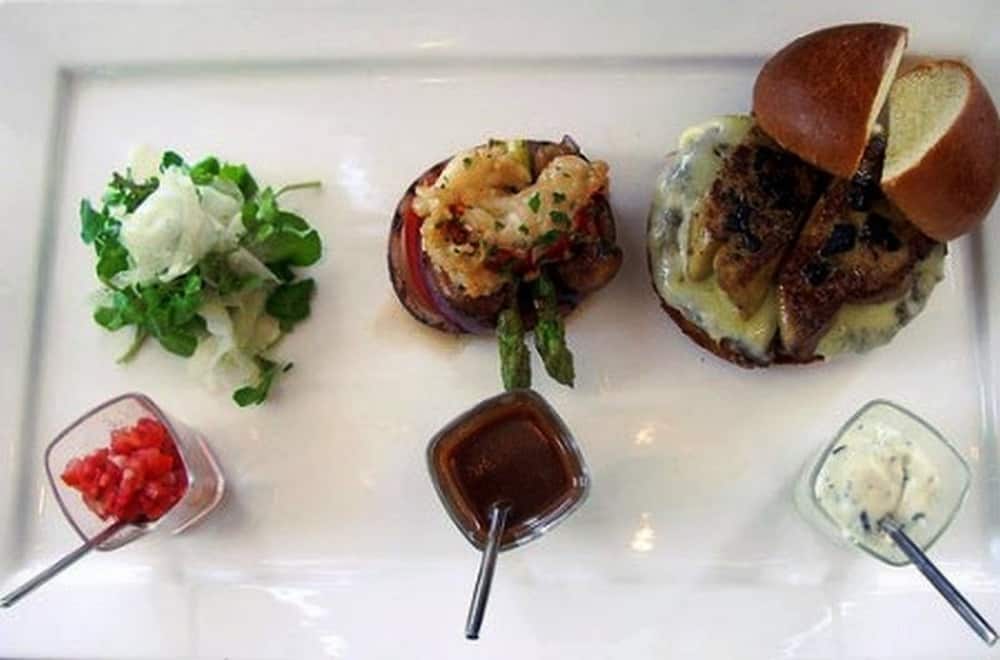 We can’t tell you where the name comes from, but we can tell you that The X Burger is the creation of Chef Ciaran Hickey. It’s made with Australian Wagyu beef, foie gras, black truffles and a brioche bun.

The whole thing comes topped with grilled red onion, tomato, wild pine mushrooms, fresh asparagus and a lobster tail. Apart from that, the burger won’t be complete without an amazing selection of sauce, such as truffle aioli, dark red truffle sauce and brunoise tomato salsa. 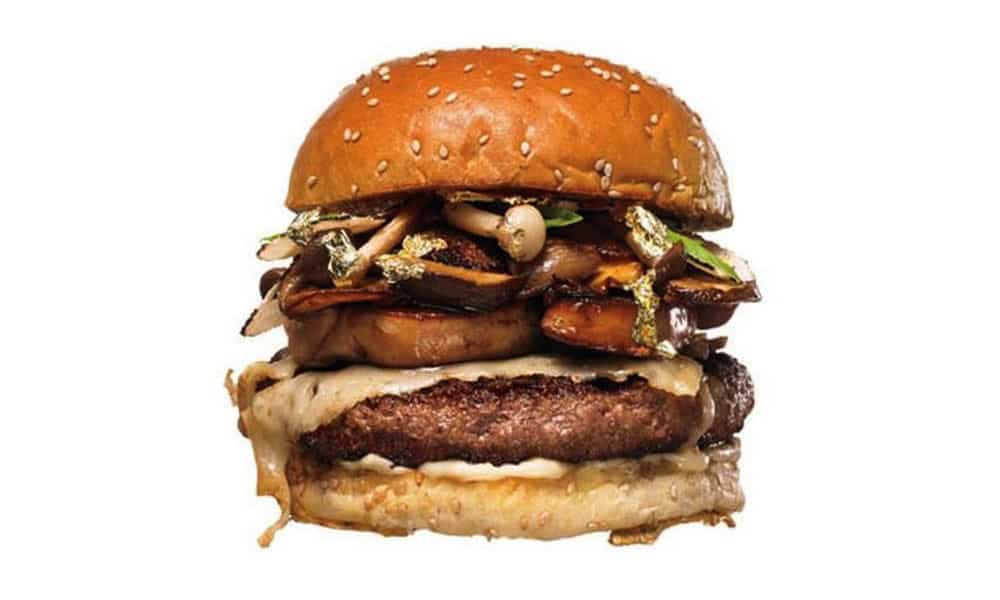 The Richard Nouveau Burger wears the name of the fictional writer of PocketChange, an online publication talking about New York’s most expensive offerings. The burger was first created in 2008 at the Wall Street Burger Shoppe.

The ingredients were aged Gruyere cheese, wild mushrooms, black truffles and seared foie gras, all served on a brioche bun, but the cherry on top were the flakes of gold leaf. We’re talking at the past tense because the burger isn’t available anymore since the restaurant filed for bankruptcy in 2011. Why? Maybe because of the price of the burger, which was a whooping $175. 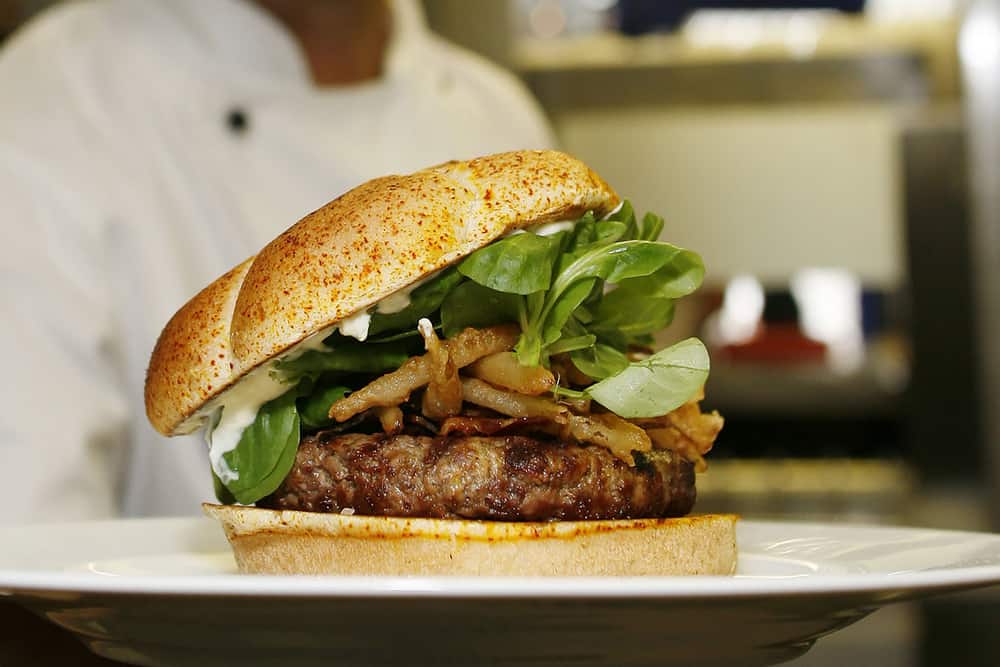 The Burger is the culinary result of the fast food giant Burger King who wanted to create the most expensive burger in the world. The year was 2008 and they had succeeded. The Burger lived up to its name and was available only in the restaurant’s branch in West London.

The main ingredient was the Wagyu beef complemented by white truffles, Spain’s finest Pata Negra prosciutto and onion tempura made in Cristal champagne. All these were topped by Iranian saffron and truffle bun. The price of The Burger is a good $186, but lost its supremacy in the battle for the ultimate burger. 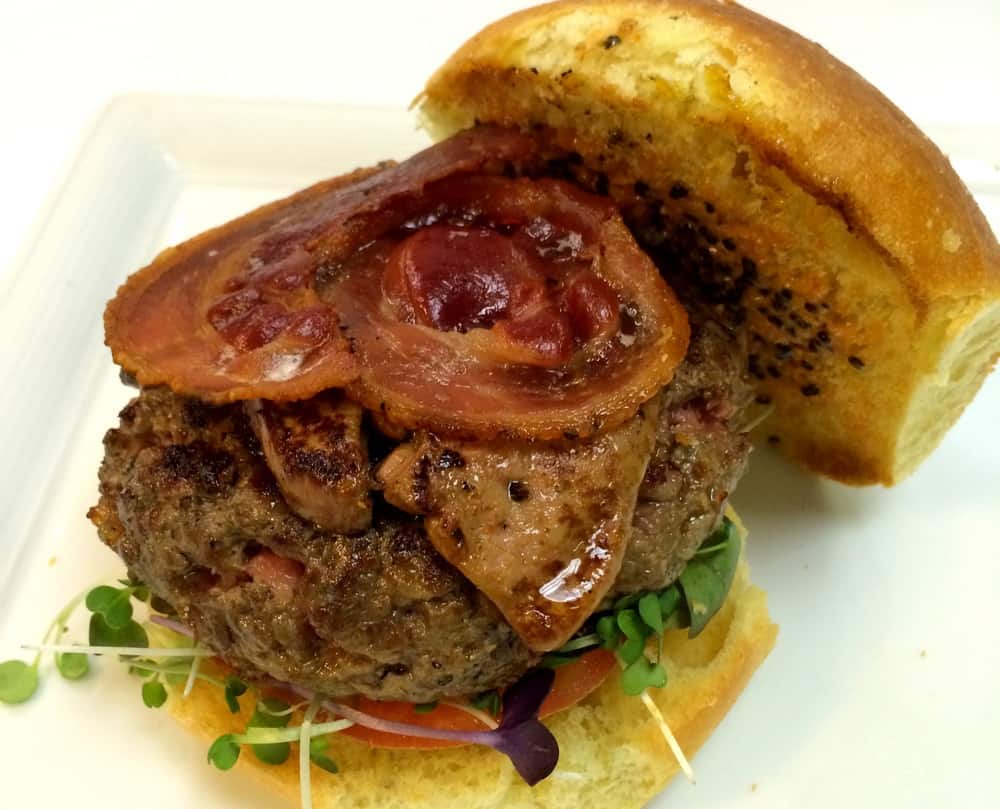 A creation of Beer & Buns of New York’s Midtown’s St. Giles Court Hotel, The Indulgence Burger came out as a burger with special ingredients that can’t be found in any normal market or farm.

The Kobe beef is the main ingredient, to which caviar, white truffles, pancetta and foie gras are added, making The Indulgence Burger into a delicious culinary adventure. The price tag for such an experience is a stunning $250. 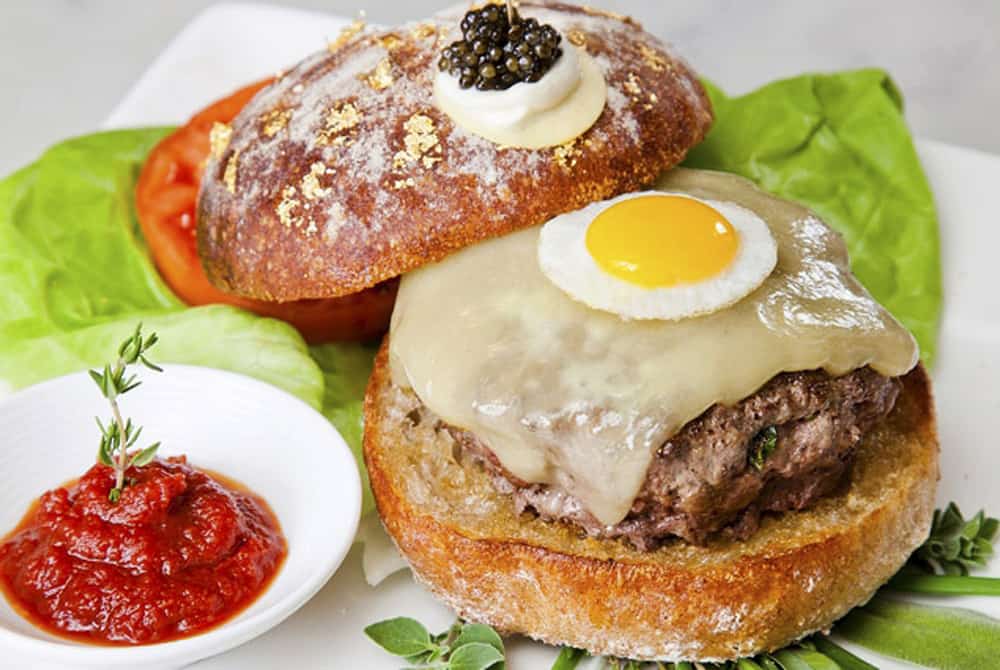 Le Burger Extravagant is the newest culinary creation of Serendipity 3 in New York, a restaurant well known for its previous extravagances with the most expensive hotdog and sundae in the world. 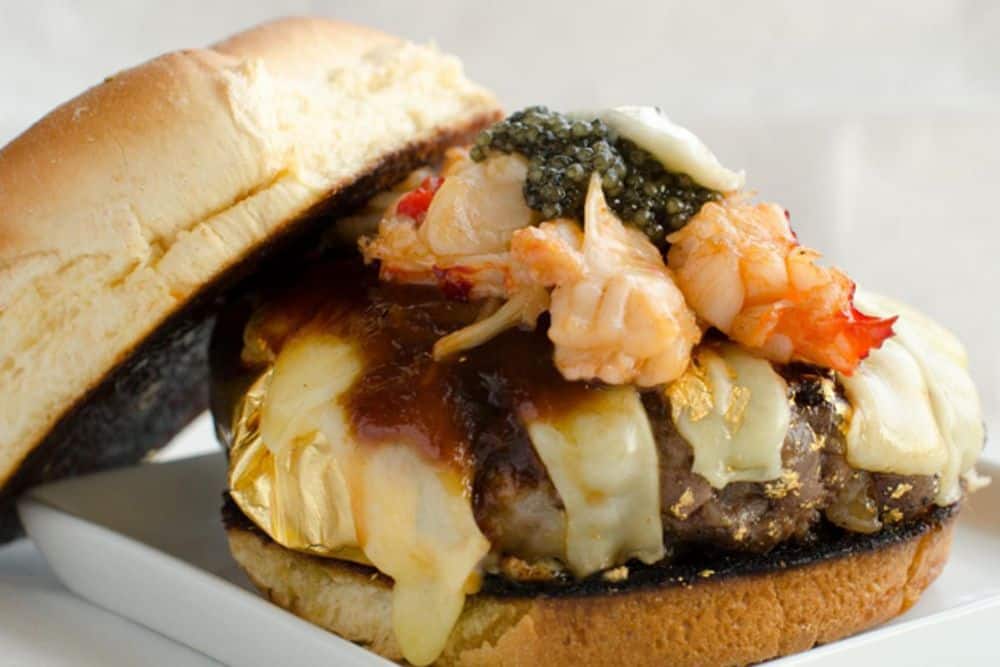 The Douche Burger is New York’s 666 Burger attempt to ridicule the whole ‘most expensive burger’ thing by wrapping the ingredients of the burger in 6 layers of gold leaf and adding 3 $100 bills which, by the end of the feast, will be so greasy that you won’t know what to do with them.

The ingredients are as well some of the most expensive in the world, a Kobe beef patty, lobster, caviar, foie gras and truffles, aged Gruyere cheese melted with champagne steam, Kopy Luwak coffee bean barbecue sauce and Himalayan rock salt. The price tag is an absurd $666. 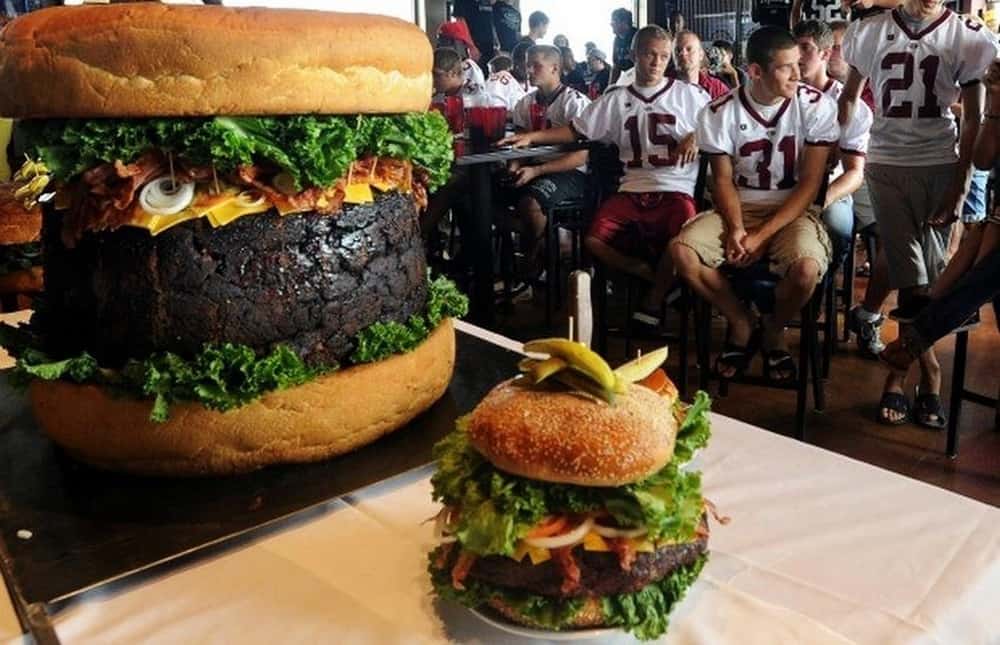 Another mockery of the same idea is the creation of Mallies Sports Grill & Bar in Michigan, US, called The Absolutely Ridiculous Burger. It weighs 338.6 pounds and it’s made from 30 pounds of bacon, 30 pounds of tomatoes, 36 pounds of cheese and 15 pounds of lettuce.

Making the huge burger takes up to 22 hours. It contains no less than 540,000 calories, it takes 3 strong men to lift it and we’re wondering how many to eat it. As the name properly suggests, the burger is absolutely ridiculous, but it’s in their menu, so whoever wants to order it, they’ve got the option.

As to what they’ll do with it afterwards it’s just up to them. And the guys don’t do home delivery. The price for this enormous burger is a jaw dropping $1,999. 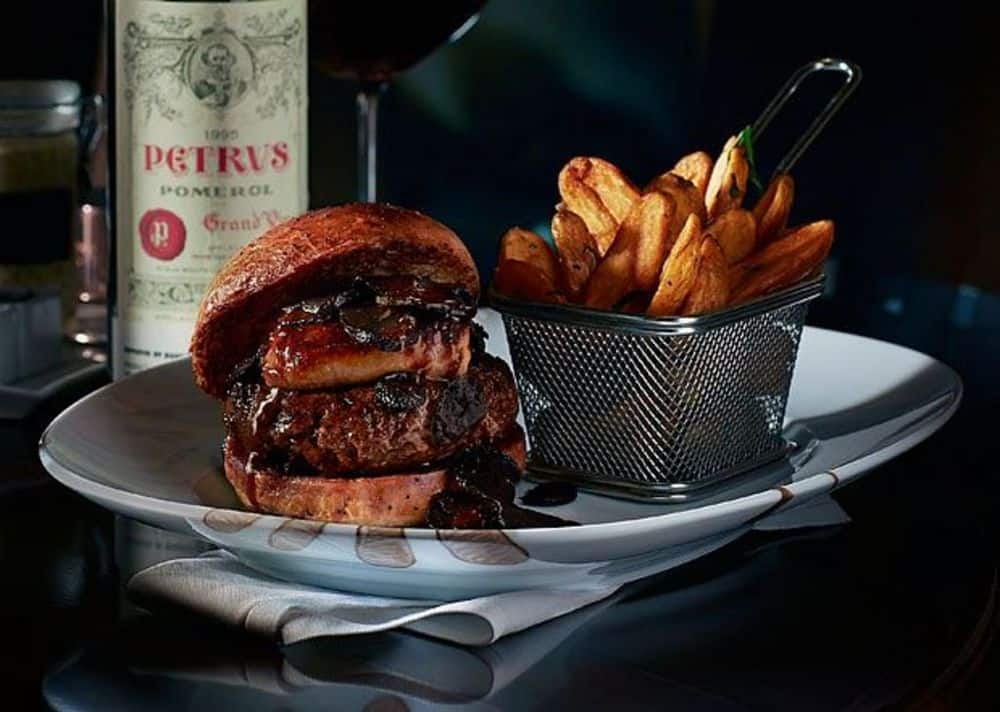 Some people call the FleurBurger the world’s most expensive burger, since it’s priced at a staggering $5,000. But it’s mostly because it’s paired with a bottle of 1995 Chateau Petrus and this exquisite wine alone could set you back more than $3,500. The real value of the FleurBurger is $70, without the wine of course.

Coming from the Fleur Restaurant in Las Vegas, this fancy burger was imagined by chef Hubert Keller as a mix of Wagyu beef, foie gras, shaved black truffles, traditional French fries and a brioche truffle bun.

Tags:
Previous Article
The A Group Takes the Wraps off Project Affinity
Next Article
Amantaka Takes You to an Enchanted World