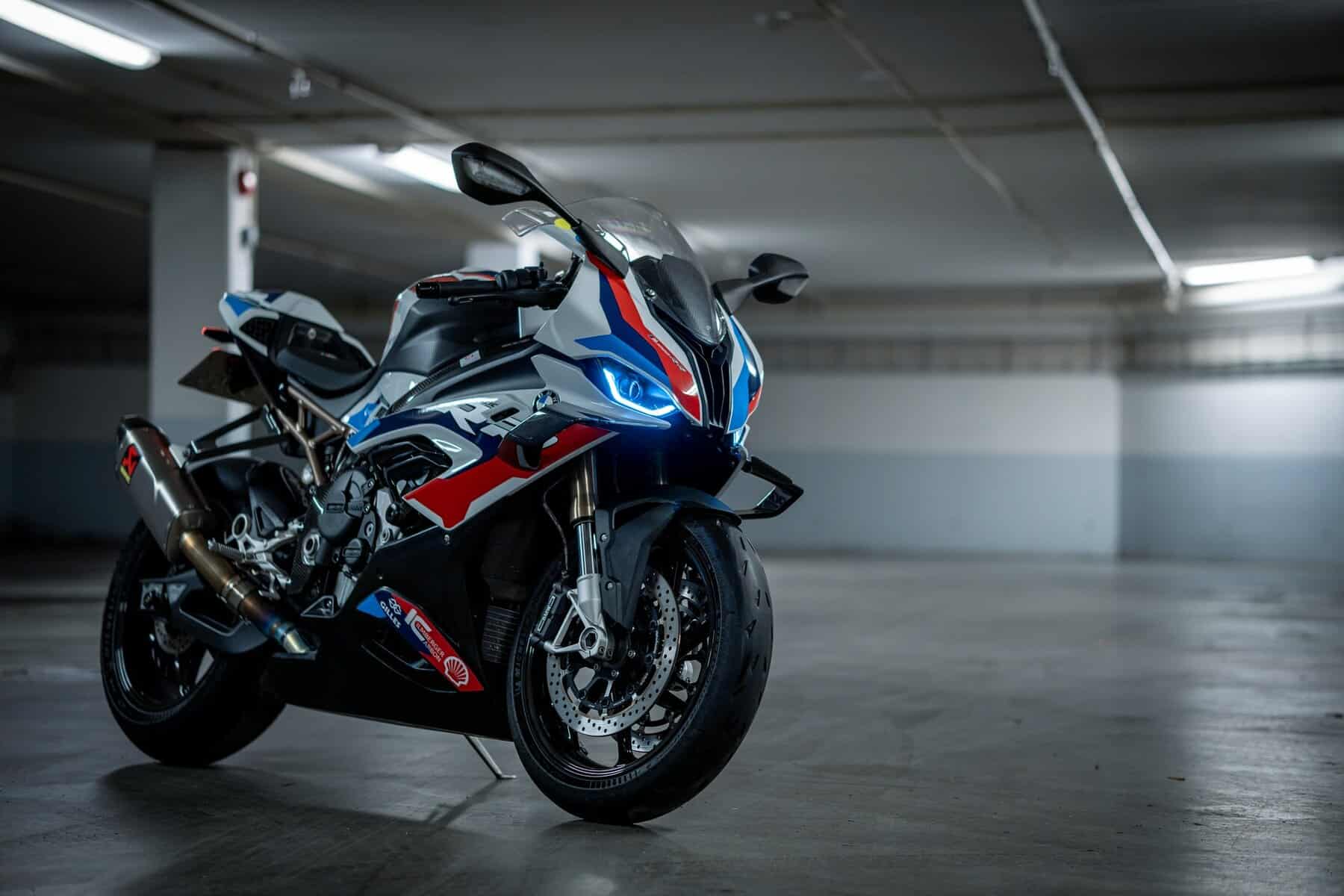 Motorcycles aren’t for everyone, that’s a well known fact. But even in the world of two wheel enthusiasts, there are motorcycles that aren’t for every motorcyclist. Capable of reaching speeds most people don’t even dream of, these are some of the most intriguing machines the advance in technology has bred over the last few years.

Conquering greater and greater speed barriers has been taking place since cars and bikes were first invented, and today this process is even more intense than ever. The technology and the level of engineering available today have made possible the creation of increasingly faster and capable machines.

Thus, with the evolution of engines and the latest and greatest developments in powertrain and chassis technology, we’re witnessing an interesting battle for the title of the fastest motorcycle in the world.

We did our best to rule out false claims and misinformation, and sorted out our findings. So let’s take a look at which are the 20 fastest motorcycles in the world right now: 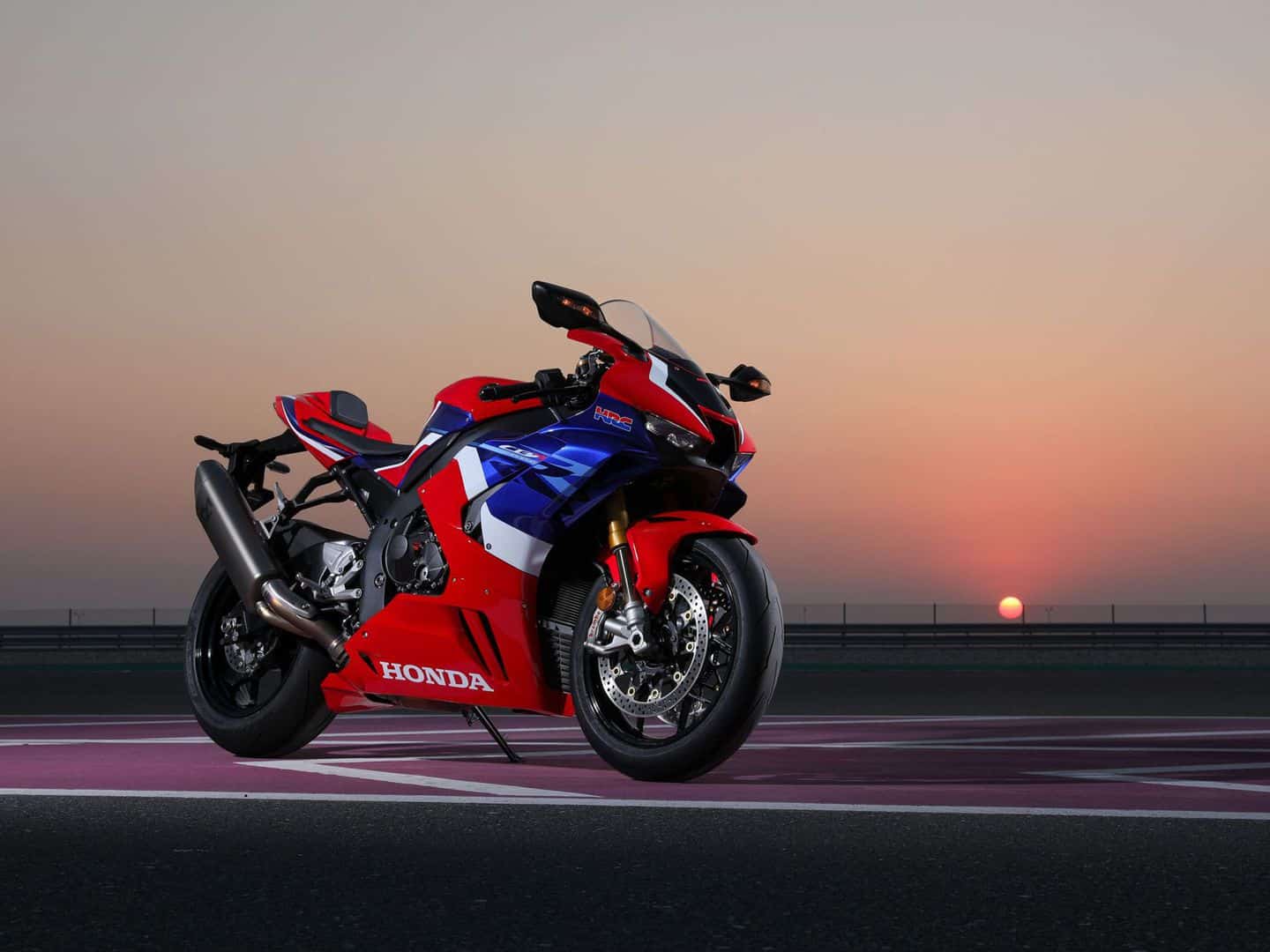 Honda isn’t the leader it once was, but that doesn’t mean they aren’t still in the race for the fastest motorcycle in the world. Aiming to regain their leading position in the liter-sized superbike class, they’ve come up with the new CBR1000RR-R Fireblade SP.

The advanced electronics and tech suite of the R SP spec, plus its super powerful 215 hp engine and the redesigned bodywork are all able to push this bike to an impressive 186 mph. And that’s electronically limited, with the true max speed probably higher. 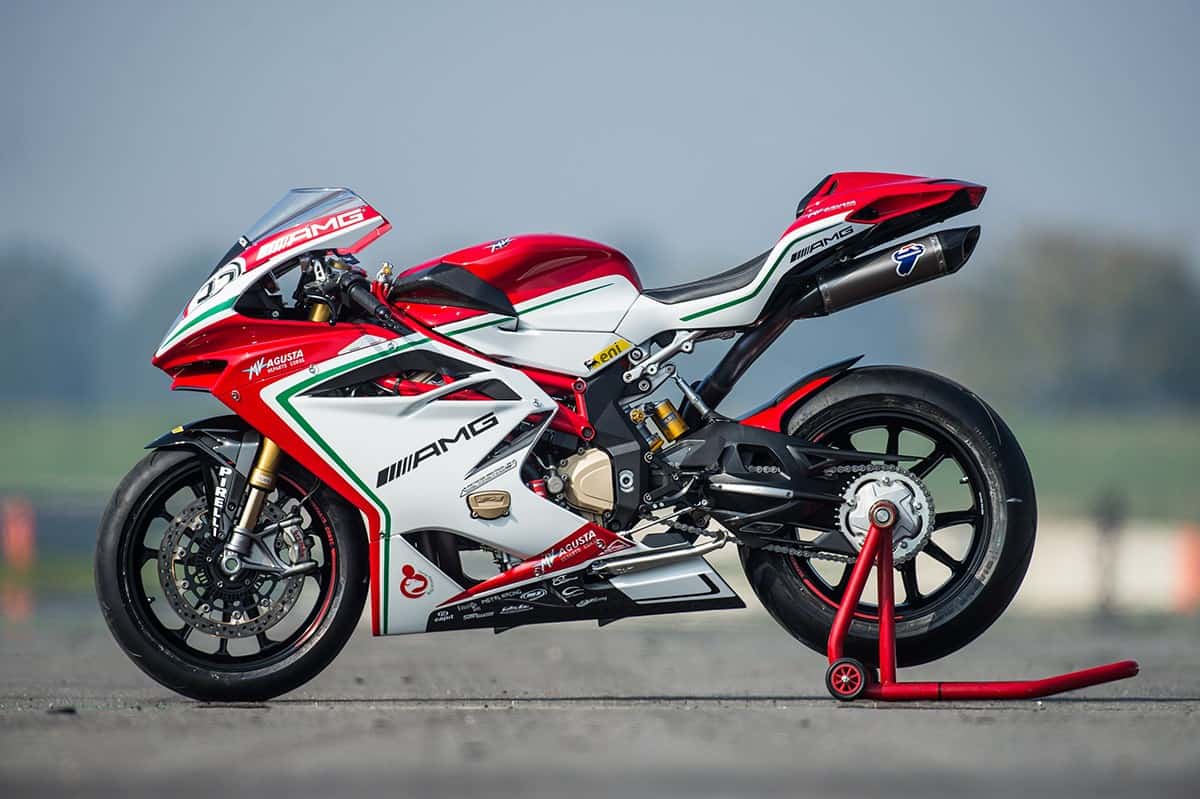 While there’s another MV Agusta F4 variant which is even more capable than this one, it’s still an impressive feat, especially given the year. 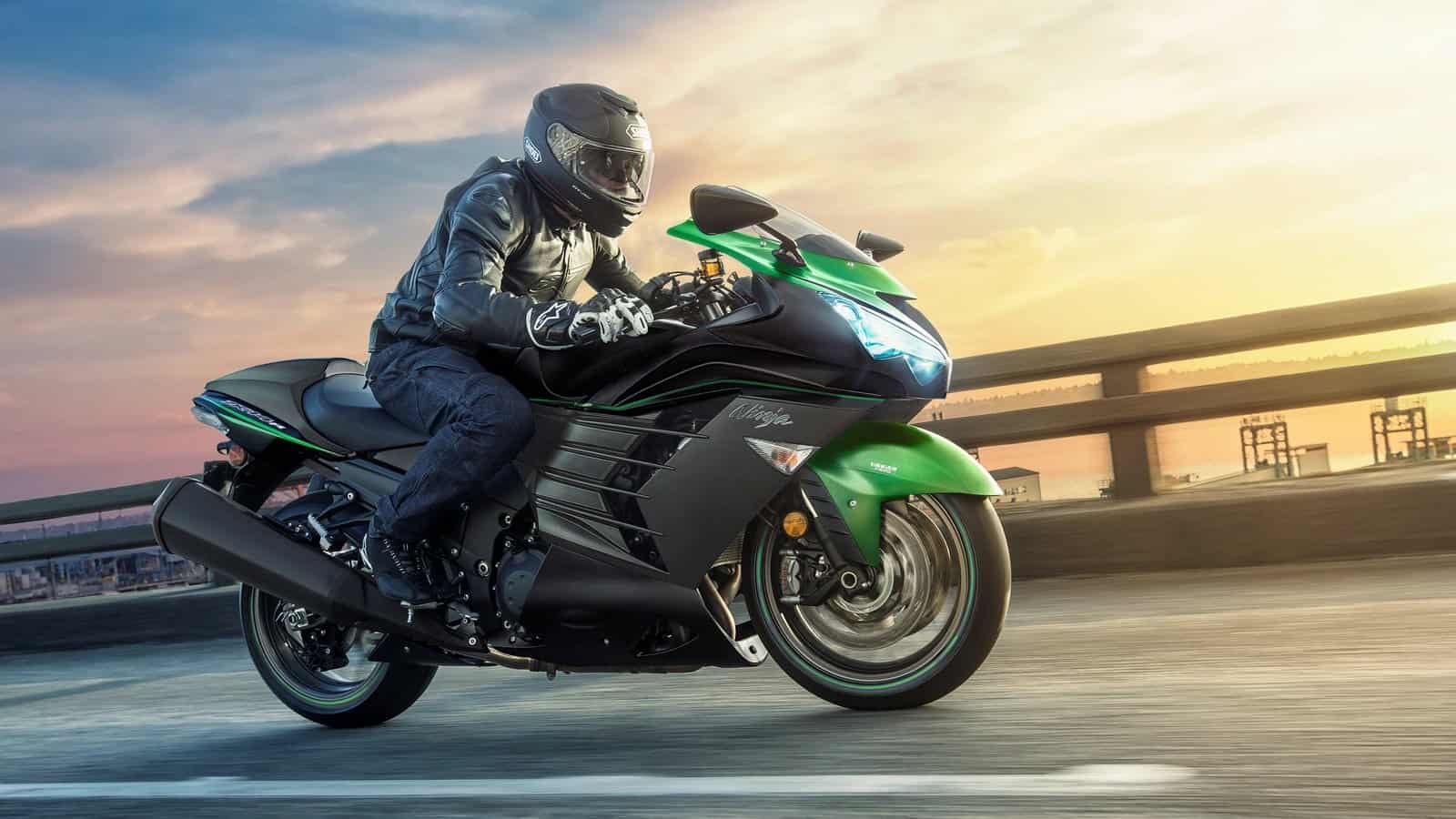 Dubbed by many the Hayabusa killer, the Kawasaki Ninja ZX-14R comes powered by a whooping 1,441cc DOHC inline four engine, capable of more than 200 hp and 115 ft-lb of torque.

With its longer body and larger displacement, this sport touring bike is extremely stable at speed. If you don’t believe us, watch some drag races between this one and its faster sibling, the Ninja H2.

Other features include Brembo brakes, traction control and several power modes, all of them essential for the good control of the bike, since it’s capable of reaching speeds in excess of 187 mph. 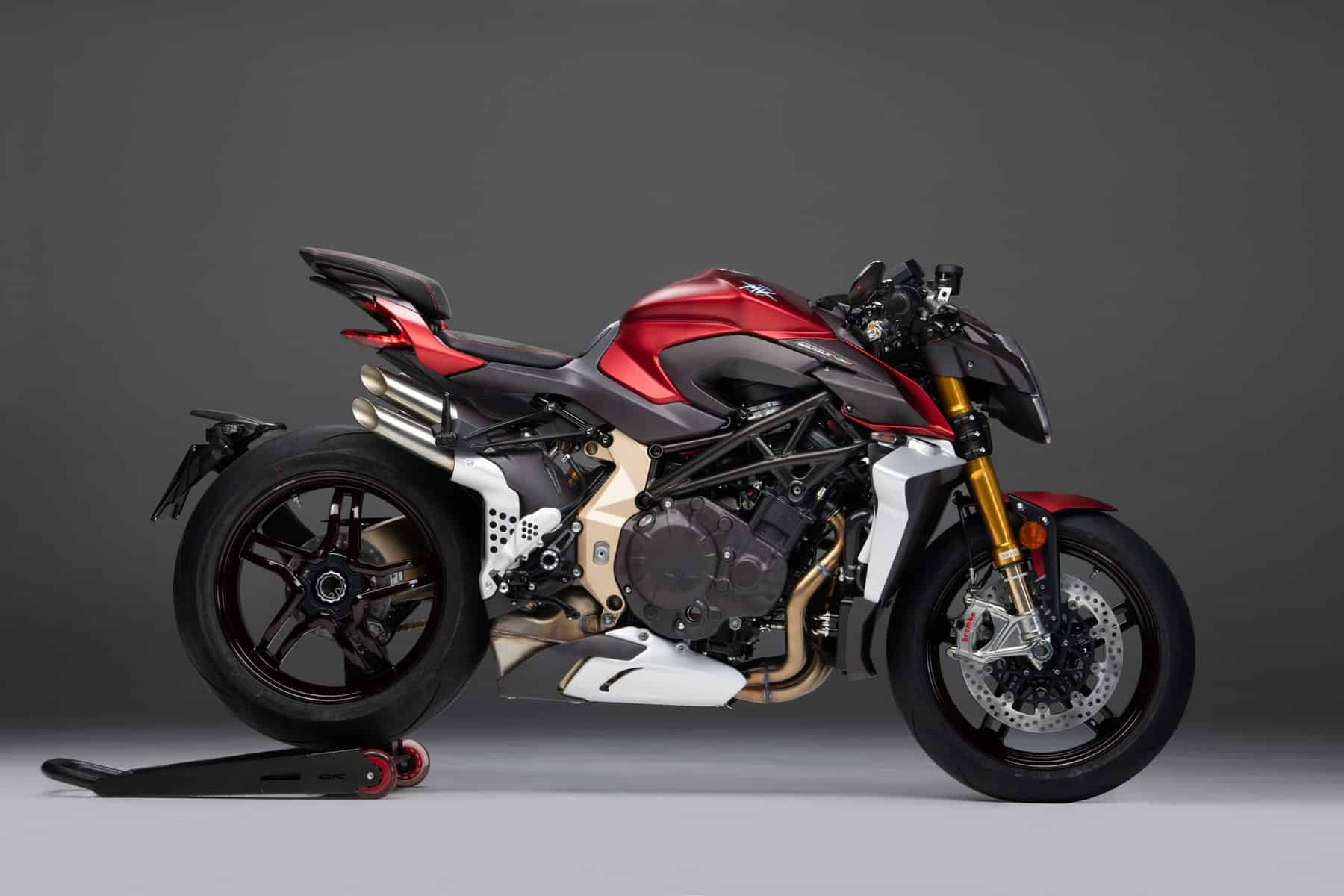 The Serie Oro (Italian for Gold Series) is MV Agusta’s ultra high end variant of their new production models waiting to be released in mass. Thus, before releasing their new Brutale 1000RR, they’ve launched a limited edition of the Brutale 1000 Serie Oro.

The aggressiveness of the bike can be seen in both its chassis design and in its top speed of 189 mph, possible thanks to its 200+ hp generated by the liquid cooled 998cc DOHC inline four masterpiece of an engine. 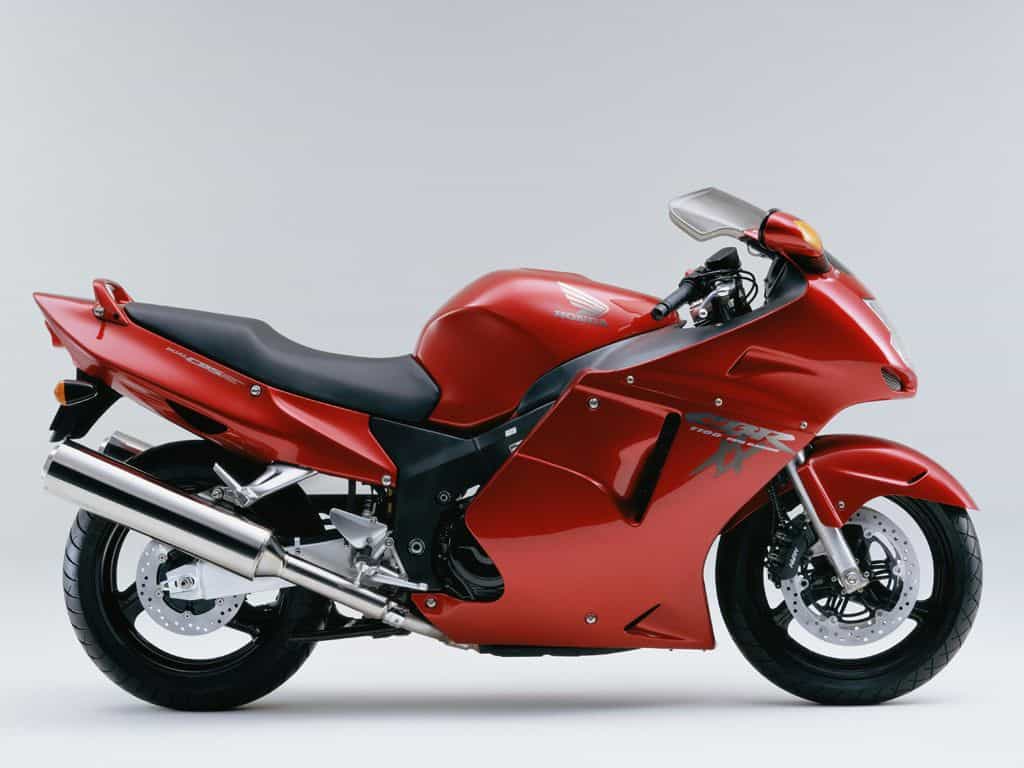 The forgotten hyperbike, the Honda CBR 1100XX Blackbird, is an amazing sport tourer which debuted with its first model back in 1996 and held the world title of the fastest production motorcycle for several years before the Hayabusa was born.

Produced for only 9 years, there are very few models on the roads today, but still an impressive speed machine, capable of 190 mph and of zero to sixty in just 2.8 seconds. 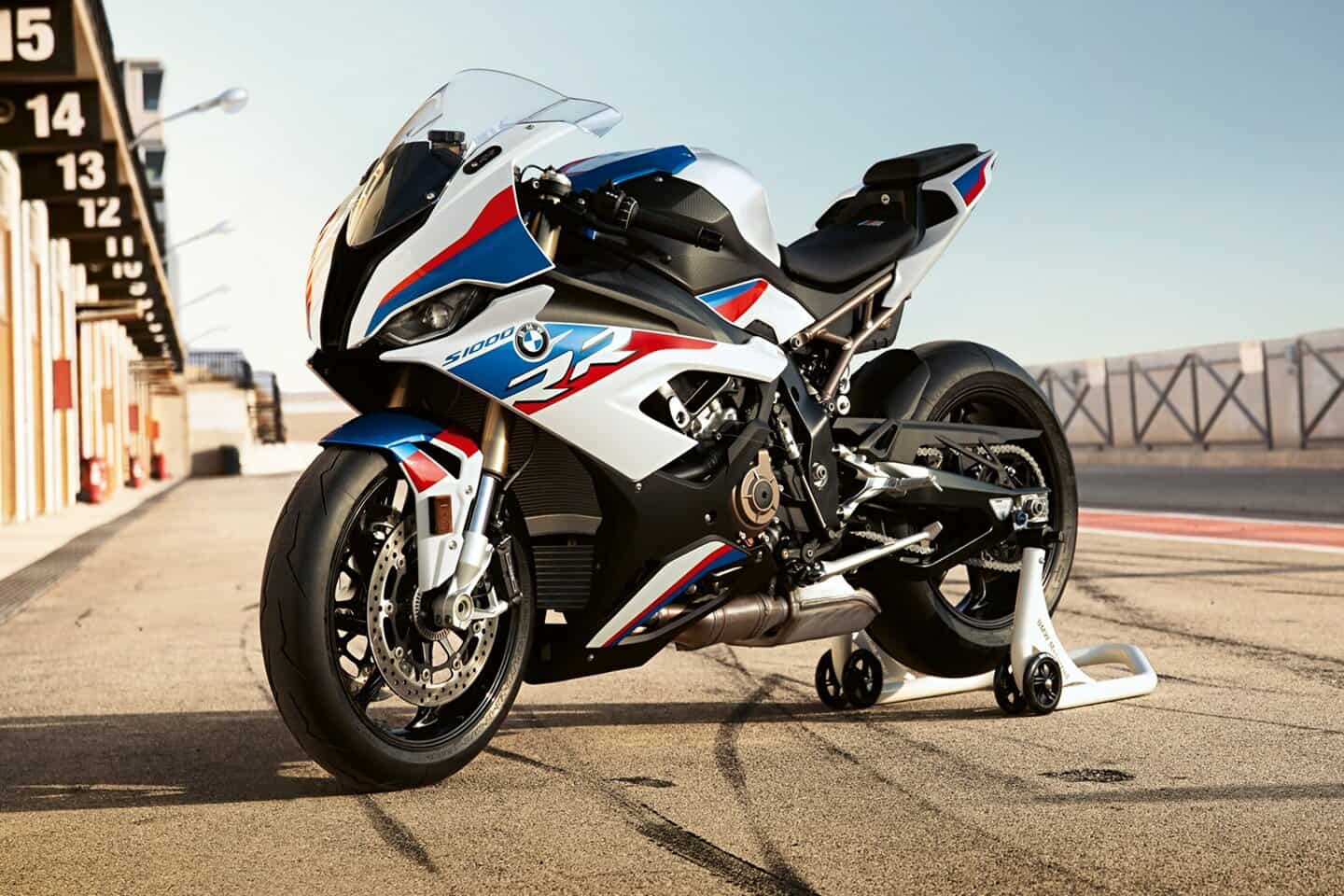 BMW managed to pull out an impressive technological feat with their new S1000RR, revolutionizing the superbike class with a sophisticated electronics package.

The BMW superbike featuring the optional M-Performance package pushes its top speed to 192 mph, keeping it in top, among all the other big names everybody expects.

The bike is equipped with a liquid cooled 999cc DOHC inline four engine that outputs 205 hp. Compared to the old model, its appearance has improved a lot, thanks to the new LEDs and bodywork. 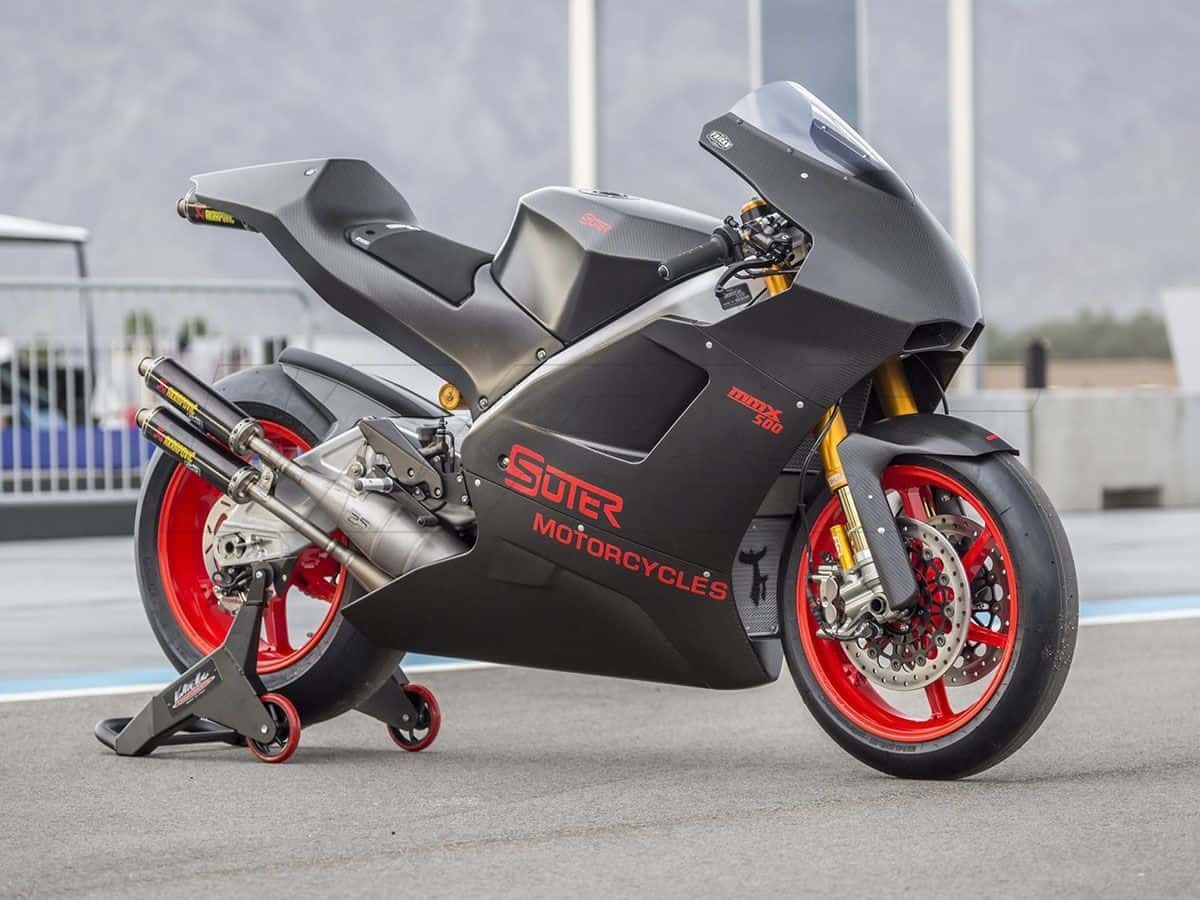 While most entries are liter-sized bikes or over, the Suter Racing MMX 500 is capable of a 193 mph top speed with just a 576cc engine. The liquid cooled two stroke DOHC V4 produces 195 hp.

The bike brings back the MotoGP nostalgia of times past when bikes featured half-liter two-stroke engines.

The carbon fiber bodywork of this hand built Swiss machine helps a lot in reducing the weight and pushing the bike faster. The MMX 500 comes in a limited edition of only 99 units. 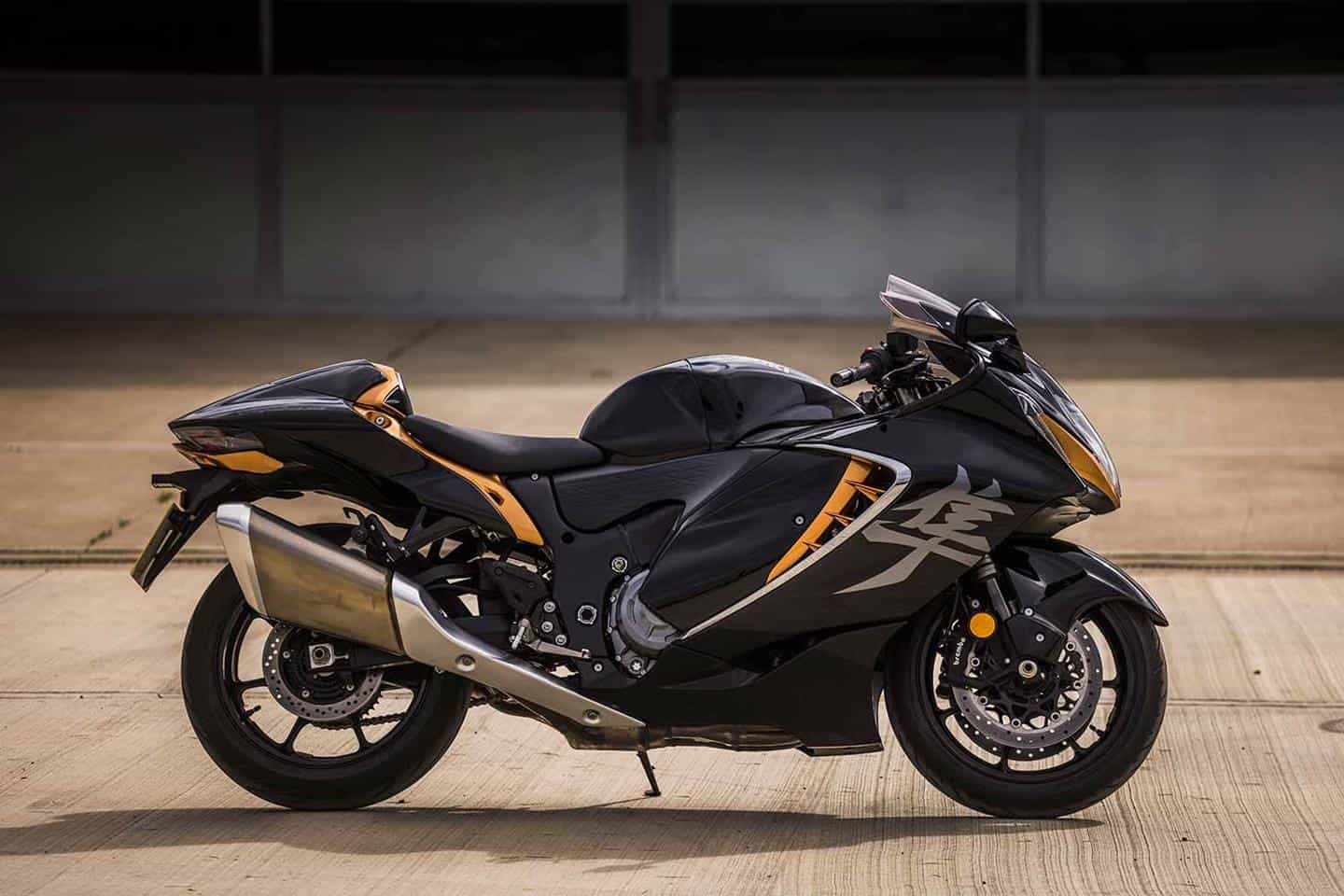 One of the most iconic motorcycles to ever hit the road, the Suzuki GSX1300 R Hayabusa is many rushers’ dream. The bike, a legend of the ’90s speed wars, is in production even today, with updated models that still stay true to the core of what made this Japanese bike so amazing in the first place.

Coming with an advanced and modernized electronics package, reworked suspensions, and more sophisticated aesthetics, the new Hayabusa keeps the old charm while speeding as high as 194 mph. As the naked variant of their legendary superbike, the Ducati Streetfighter V4 S keeps up with its sibling in every regard, making many Ducati fans happy all over the world.

The S spec of the Streetfighter V4 comes with Ohlins suspension and plenty of cutting edge upgrades. This Ducati beauty is also a beast when you think of the 208 horsepower 1,103cc engine and 195 mph top speed. 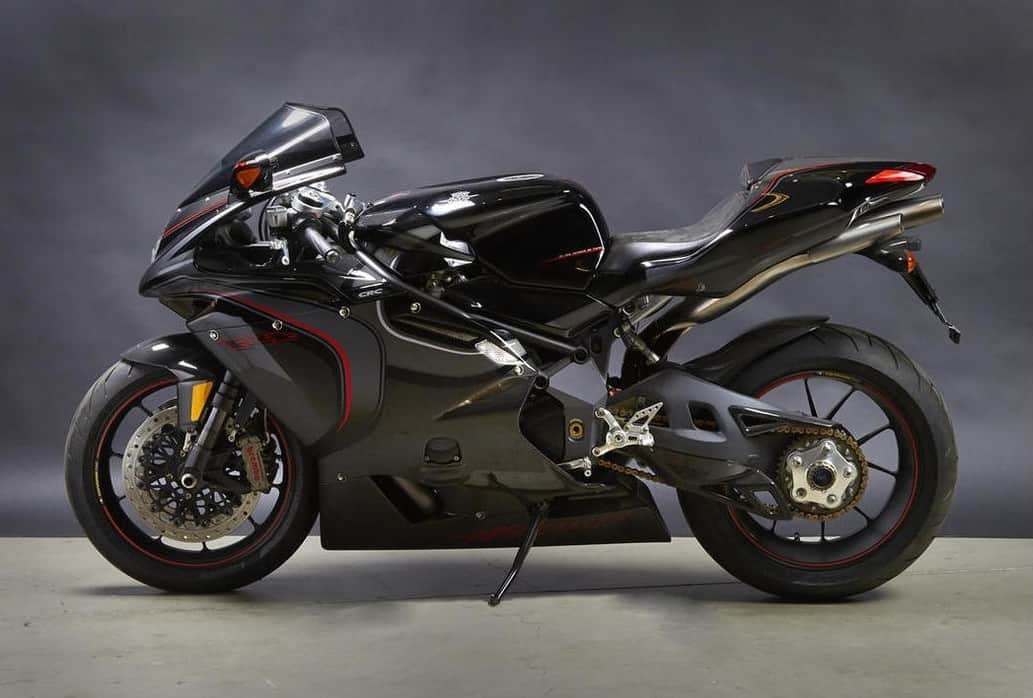 Produced by hand in a limited edition of only 100 units, the MV Agusta F4CC is one state of the art motorcycle, capable of reaching a top speed of 195 mph.

The bike is made using carbon fiber fairings, and features a titanium exhaust, with most of the components being tailor made. The 200 hp engine was fine tuned to get the most out of it, making the F4CC a superb piece worthy of history books. 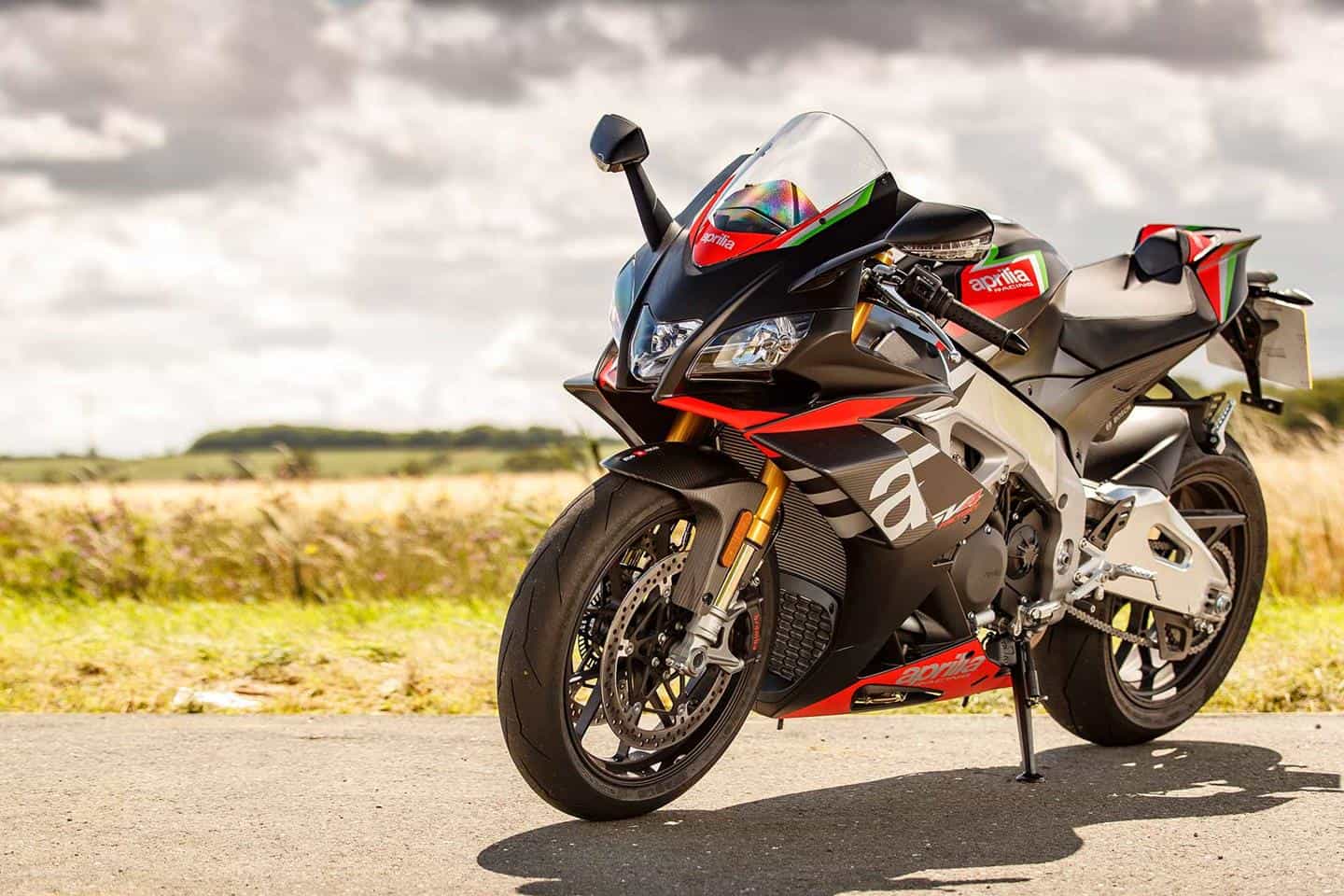 Powered by a 217 hp V4 engine, the Aprilia RSV4 1100 Factory is one of the fastest production motorcycles in the world, almost breaking the 200 mph barrier. Its top speed stops just 1 mile before that.

The gorgeous bike features a dual-beam aluminum chassis, Ohlins suspensions and Brembo brakes for premium road handling and performance. It impressed the audiences in its first full season of WSBK competition, having hit the podium 9 times. 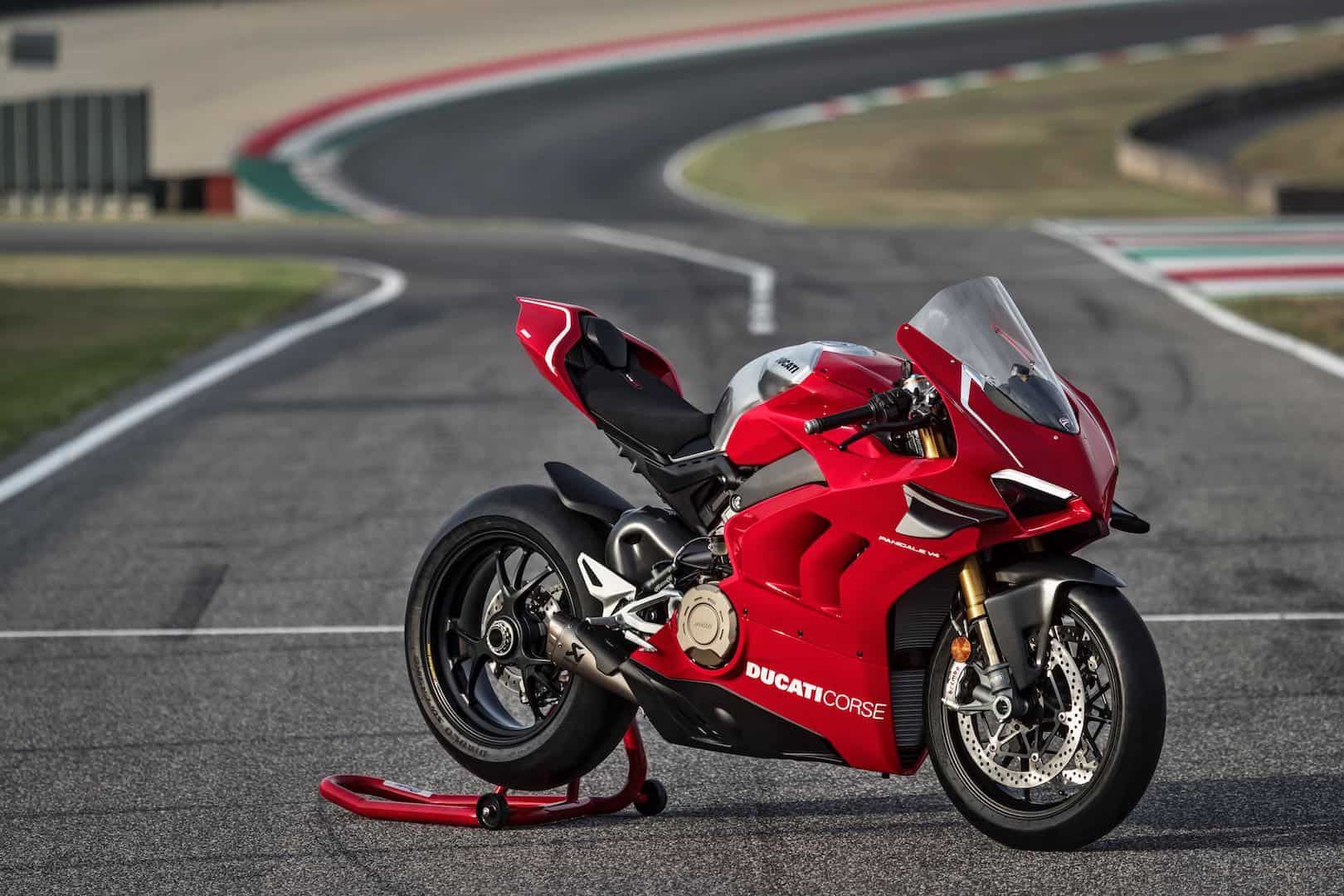 Derived from their MotoGP V-4 platform, the sub-1,000cc race ready Ducati Panigale V4 R impressed the entire world with its extreme performance. It’s one of the best performing motorcycles on the globe, able to get astounding lap times on the racetrack.

Powered by Ducati’s most powerful engine to date, outputting 221 horsepower, or 234 with the race exhaust, the V4 R is capable of hitting a top speed of 199 hp. 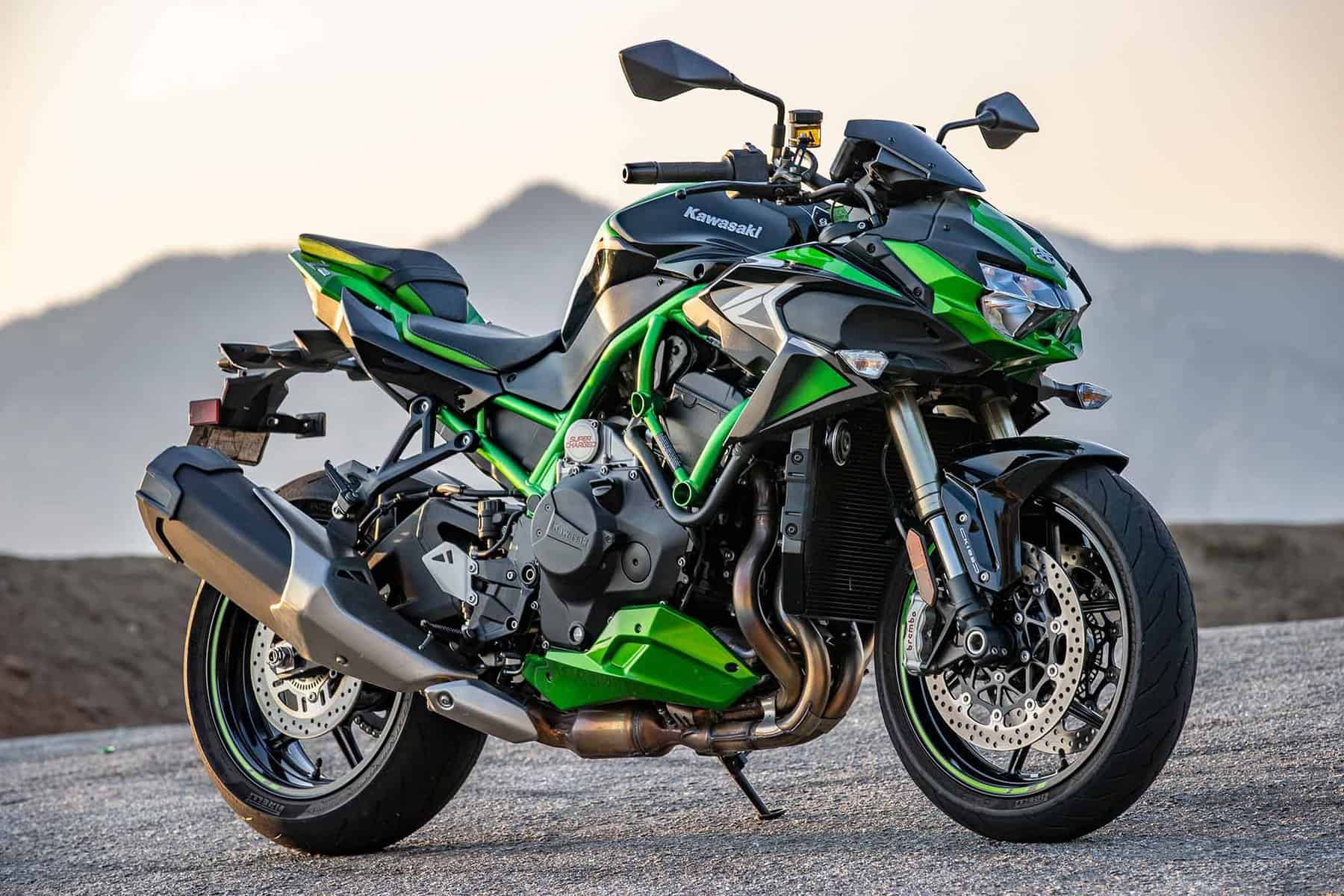 Hitting the 200 mph barrier is the Kawasaki Z H2, a naked bike from the astonishing Z line of motorcycles from the Japanese maker that sports the high-performance Ninja H2 engine.

The new Z H2 is insanely capable, especially when you think it’s a naked bike. Even more when you find out its price tag of $17,000. Why buy a super expensive car when you can have one of the fastest motorcycles in the world with a lot less money? 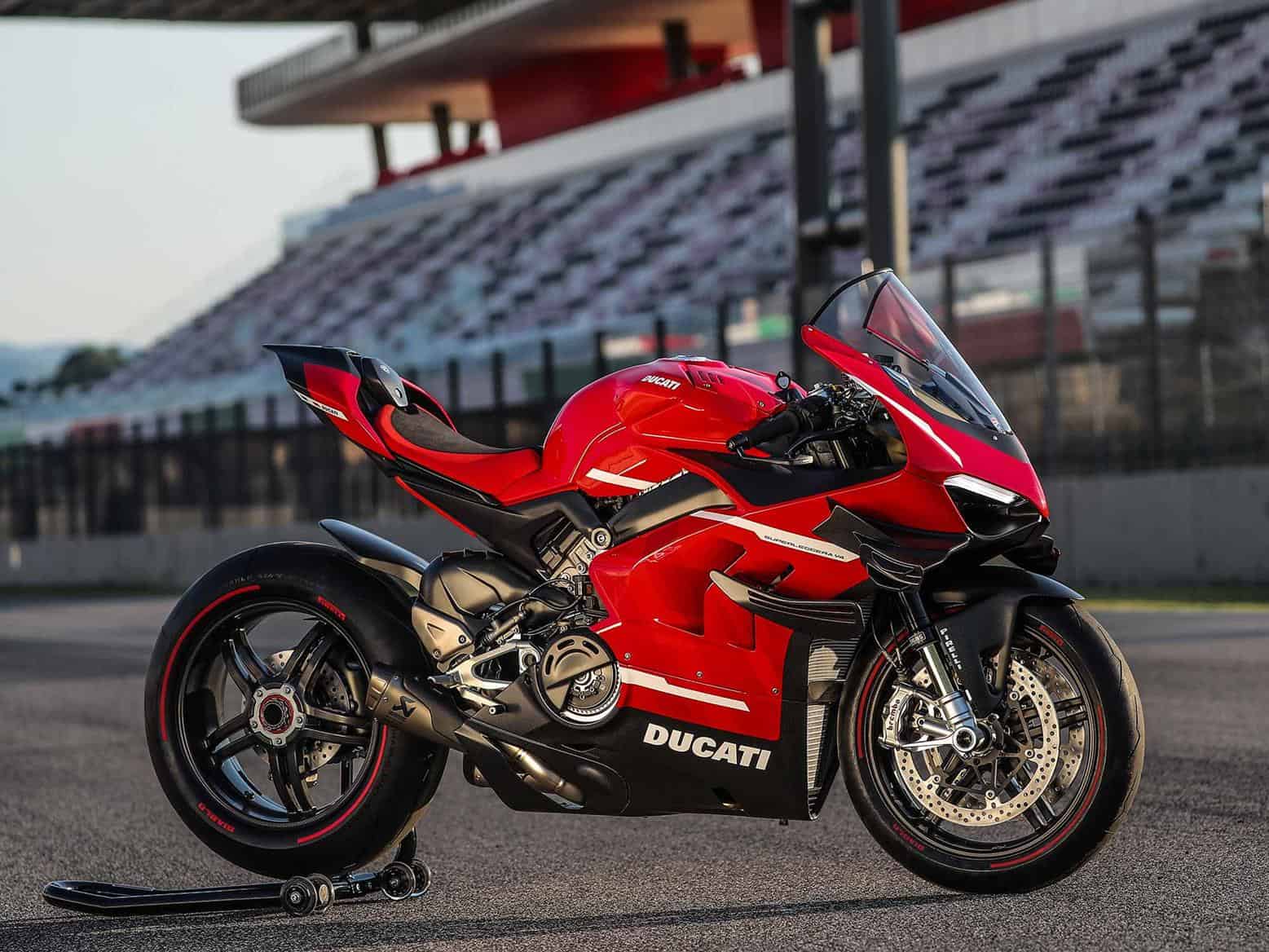 Sporting the 234 hp engine of the Panigale, carbon fiber only bodywork and all-carbon wheels, the Ducati Superleggera V4 became the bike with the most impressive power-to-weight ratios ever created.

The exotic machine’s name is just right, with Superleggera meaning “Super Light” in Italian, which helps beat the Panigale to the 200 mph top speed. 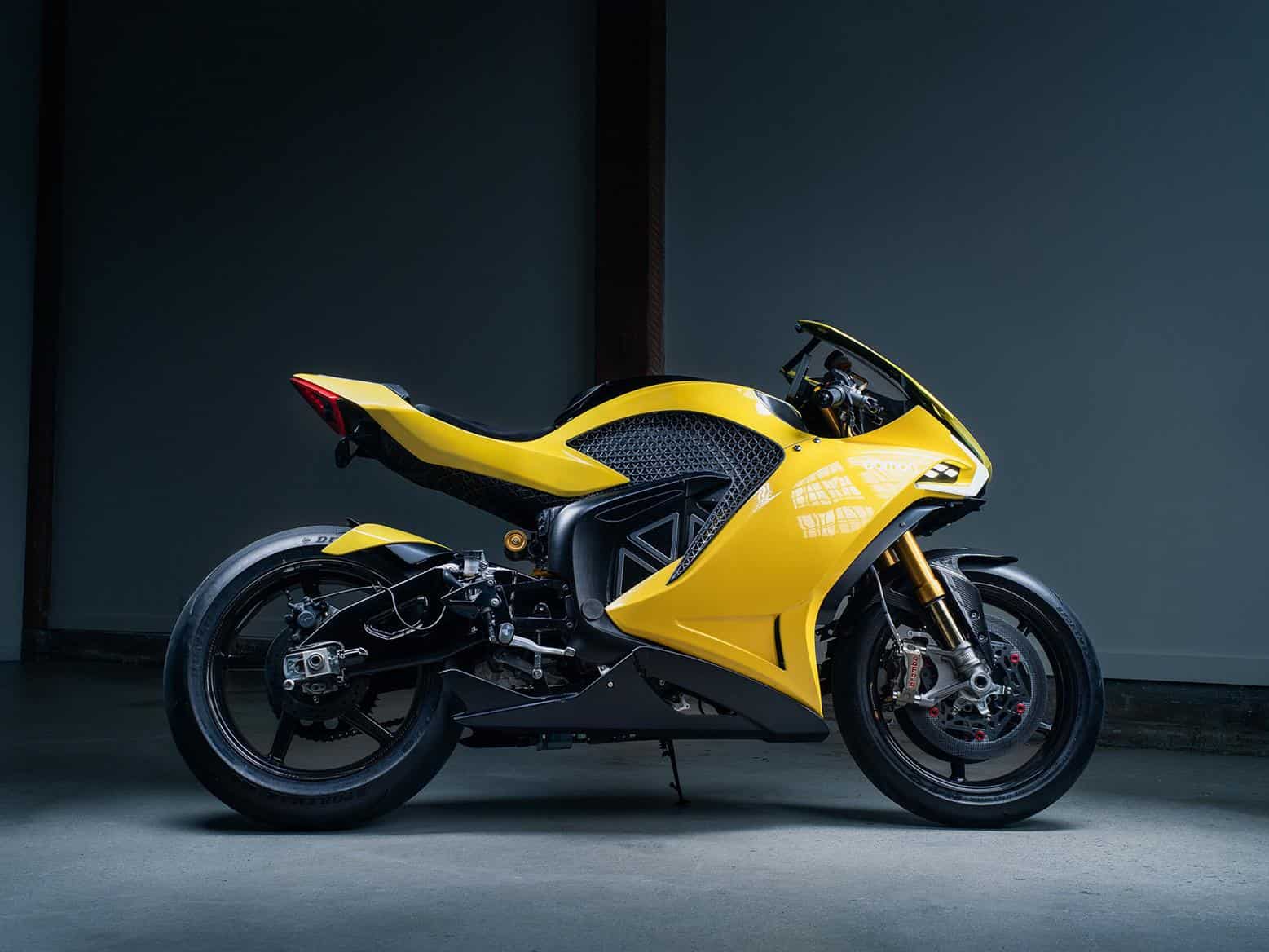 The Damon Hypersport Pro boasts with a claimed top speed of 200 mph, as the bike hasn’t been launched yet.

This one is an all electric daredevil, but even more impressive than that claimed top speed are all the features it will have, like rear facing camera, 360 degree sensor awareness and predictive artificial intelligence, alerting you to dangers from all sides, and decent 200 mile range.

The bike will get its power from a 150 kW electric motor and store its energy in a 20 kWh battery. The three hour charge time surely makes it appealing, while the claimed performance figures will make this the best electric motorcycle ever and probably serve as a good example for other motorcycle brands to follow. 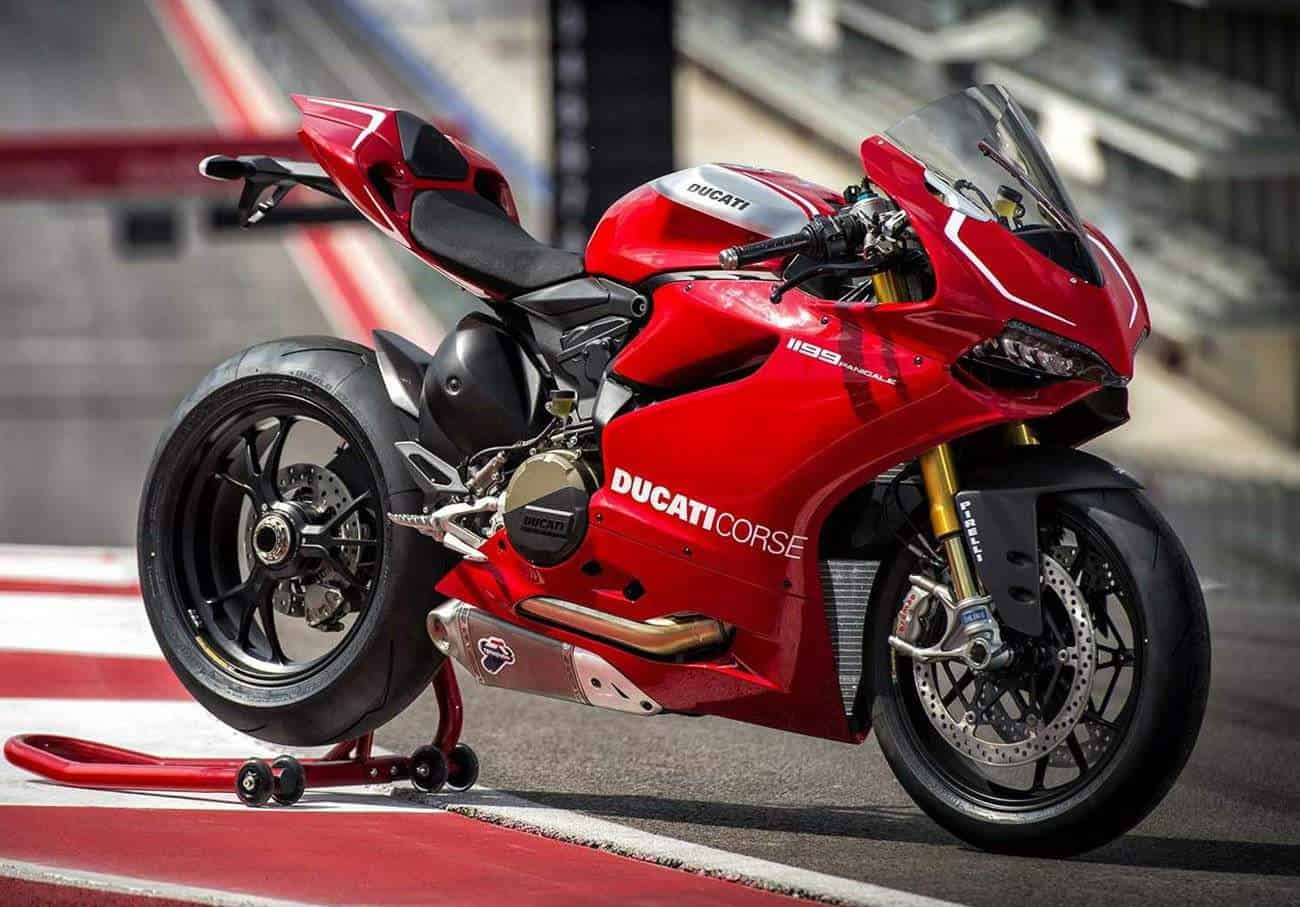 Powered by a bigger engine, the Ducati 1199 Panigale R ups the game with a top speed of 202 mph. The bike is exceptional in all aspects, not just speed and raw power.

Handling is top notch and that’s due to the high performance adjustable swingarm and Ohlins suspension. The two cylinder engine features titanium rods, a finely-tuned engine mapping and an extremely lightweight flywheel. 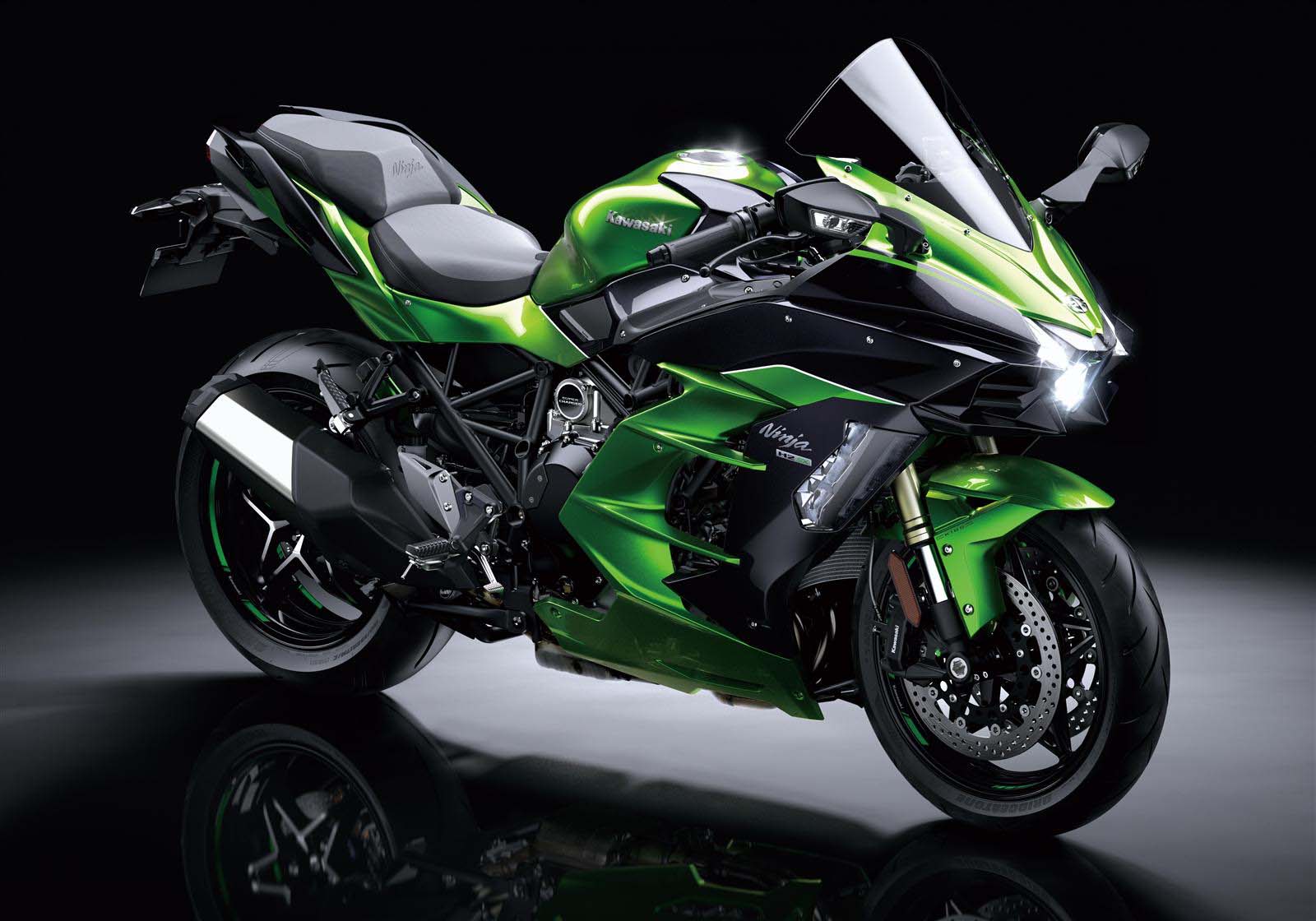 The liquid cooled, supercharged 998cc DOHC inline four engine is capable of outputting 210 horsepower and 98.5 ft-lb of torque, pushing the Japanese speed demon to a maximum speed of 209 mph.

That and the astonishing looks have impressed motorcycle enthusiasts all over the world, making the Ninja H2 the new name that’s on everyone’s lips when it comes to fast motorcycles. 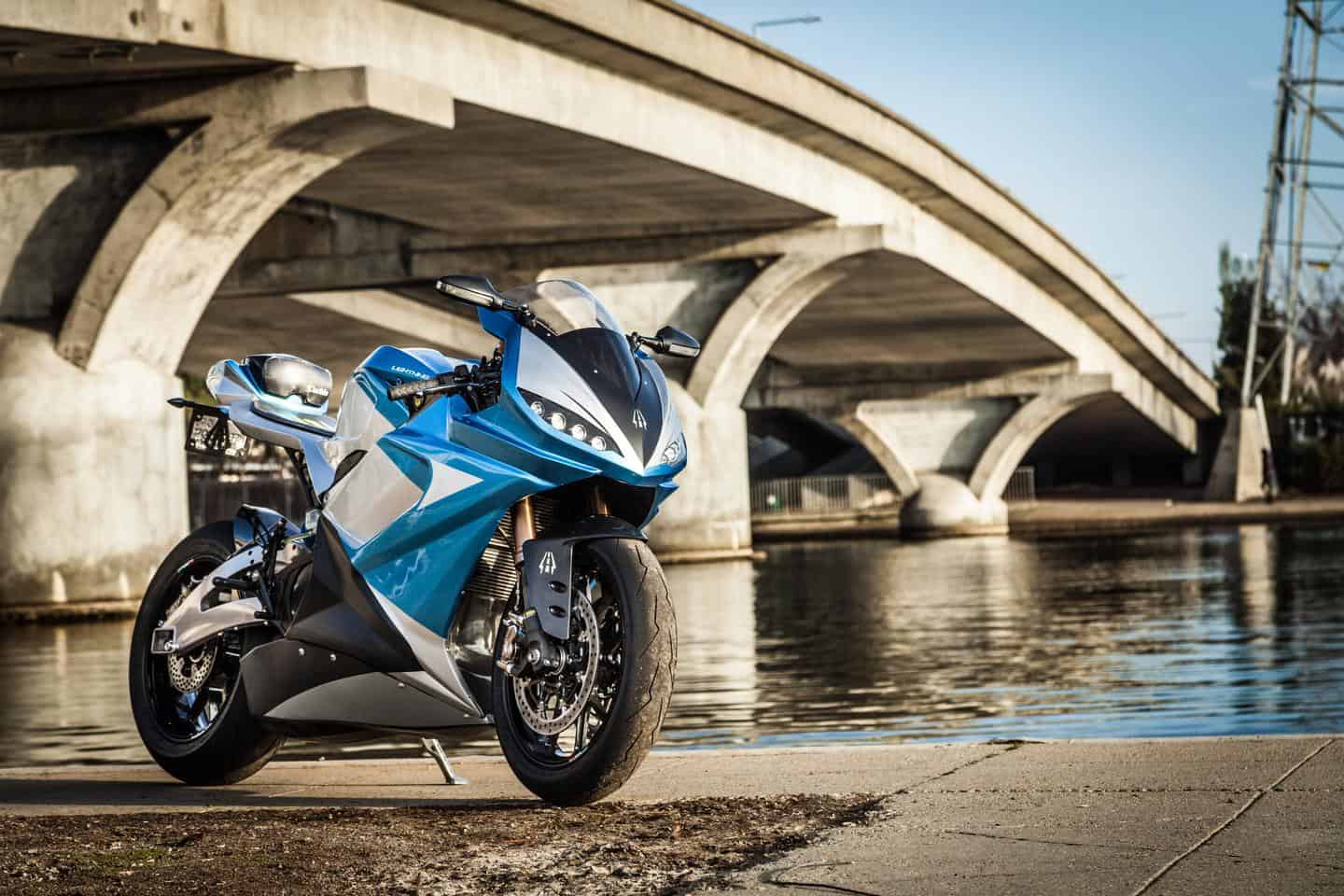 The LS-218 though, is the opposite. It’s an ultra-high-performance electric machine, capable of a top speed of 218 mph, a figure which got its name.

It features a liquid cooled IPM electric motor with an unbelievable output of 168 ft-lb of torque and 200 horsepower. 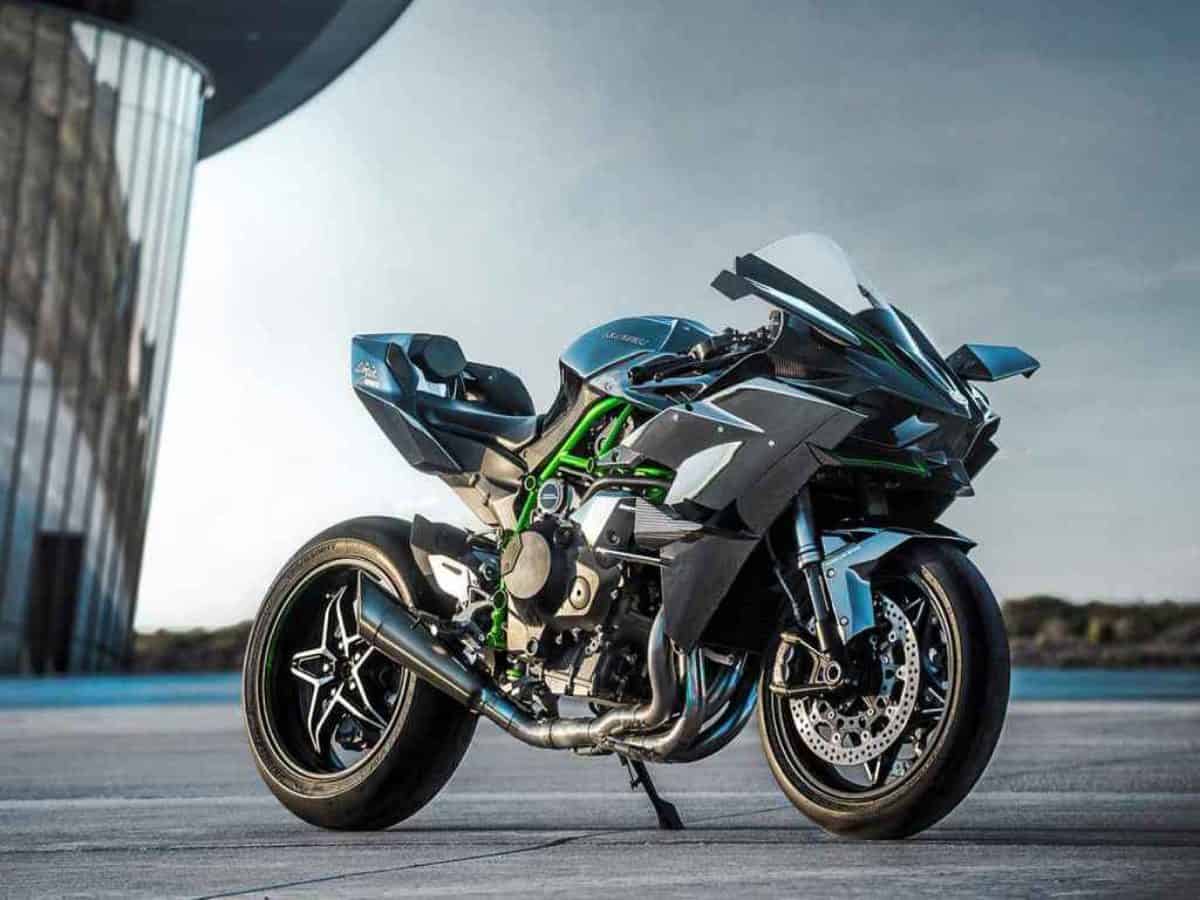 The track-only variant of the street-legal Kawasaki Ninja H2, the Ninja H2R, has already got its place in the history books after shattering the speed record of 400 km/h, or 249 mph, in 26 seconds.

Its raw performance of 310 hp and 115 ft-lb of torque, combined with the all-carbon-fiber bodywork and the unique design with the aerodynamic winglets for generating downforce make this bike a unique machine.

The H2R is the result of top Japanese engineering and features all the latest and greatest rider-focused support tech, from traction control and anti-lock brakes to engine brake control and launch control. 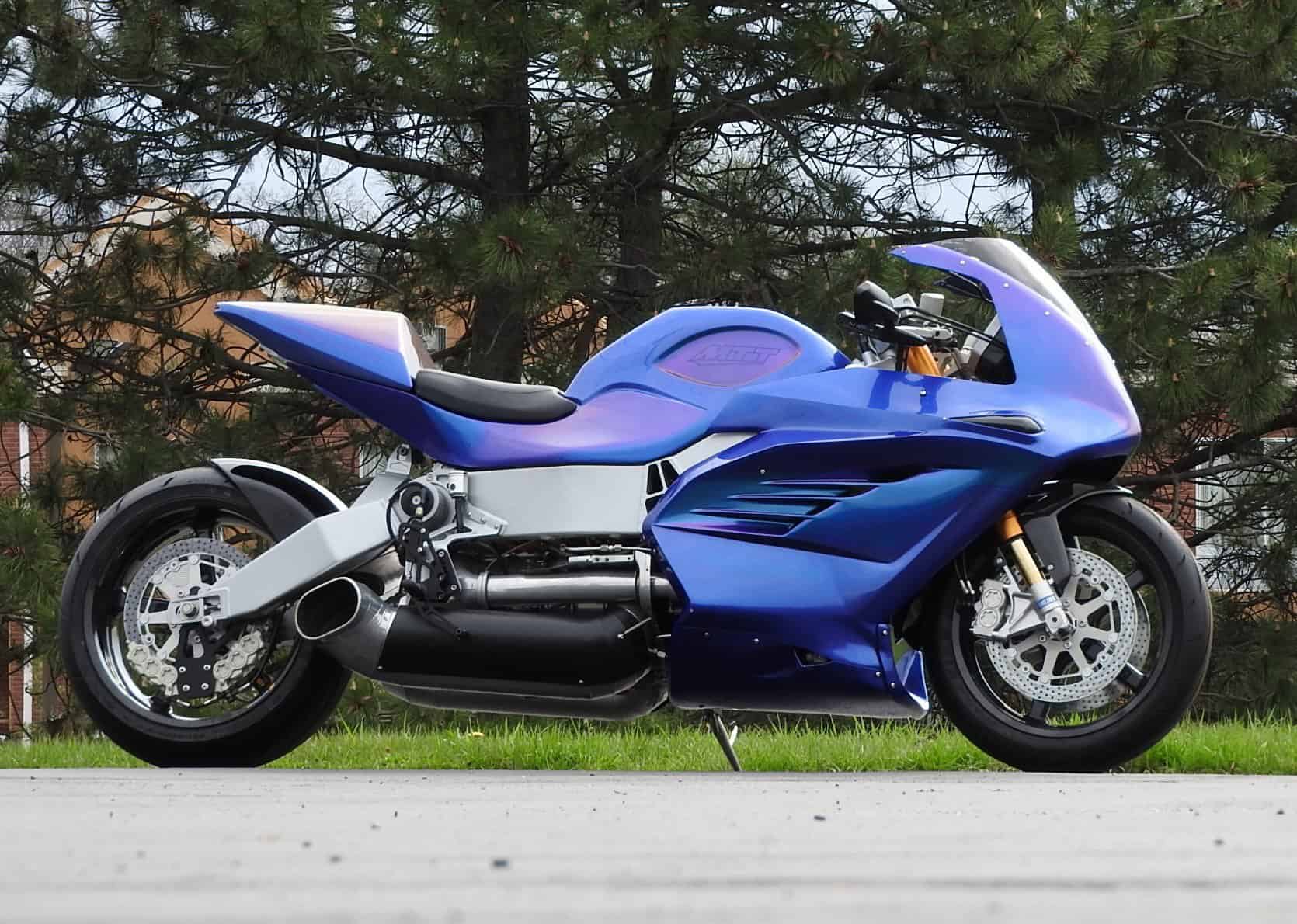 Most of you probably expected the list to finish with the Kawasaki Ninja H2R, but the incredible MTT 420RR takes the number 1 spot. For a short while, we bet. The Marine Turbine Technologies, or MTT, have launched a newer model of their previous record breaking Y2K motorcycle.

The bike is a limited edition track-only machine, and when we say limited edition, we really mean limited. The production is limited to 5 units per year, so good luck getting your hands on one. Oh, one more thing, besides being the fastest motorcycle in the world, it’s also the costliest to produce.

The top speed of 274 mph is only claimed so far, and instead putting a figure on their website, MTT just wrote “Faster Than You Will Ever Dare To Go”. We believe them. Do you?

We bet you had the Kawasaki Ninja H2R on your lips when you read the title of the article, but apparently there’s another player in town. And the game is far from over.

The speed wars of the ’90s haven’t ended yet, especially when technology evolved so much as to allow incredible performance and speed in such small machines.

We’ll see what the future brings, but with the release of several high powered electric motorcycles that quickly matched and exceeded the performances of traditional bikes, we kind of see where everything’s heading.