Top 10 Most Expensive Penthouses in the World

The penthouse is usually the most exclusive and impressive apartment in any residential building. They are spacious, well-appointed, and offer great views, so it’s not surprising that these apartments often come with hefty price tags.

The following is a list of some of the most expensive and luxurious penthouses in the world:

Faena Residence Miami Beach is a high-end 18-story oceanfront property set between the Atlantic and the iconic Collins Avenue. The duplex penthouse sitting atop of the building has been sold this spring for a record-shattering $50 million, the most paid for an apartment in Miami Beach.

This stunning penthouse features 8,273-square-feet of interior space, which includes 5 bedrooms, 5 full and 2 half bathrooms, in addition to about 10,000-square-feet on the outside. One of its highlights is undoubtedly the 70-foot-long rooftop swimming pool, which also offers some pretty spectacular ocean views. 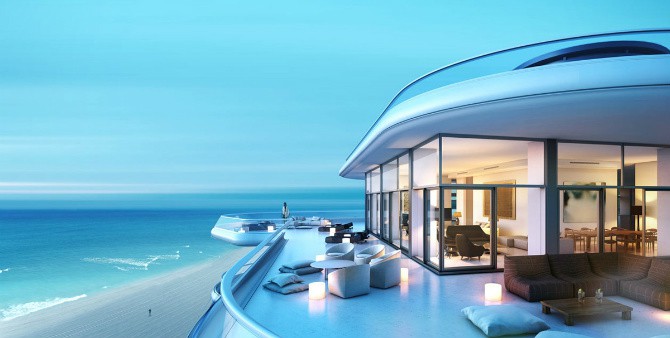 The fabulous Dome Penthouse at the Plaza in New York is one of the city’s most iconic residences. Built in 1907, it has rarely been available for sale, which only makes the spot more desirable.

Recently renovated (to the tune of $20 million!), this spacious duplex is currently owned by fashion mogul Tommy Hilfiger. In addition to the lavish decorations (which include beautiful chandeliers and plenty of works of art), the new residents will also enjoy some of the best views in New York, as the apartment overlooks Central Park and Fifth Avenue. 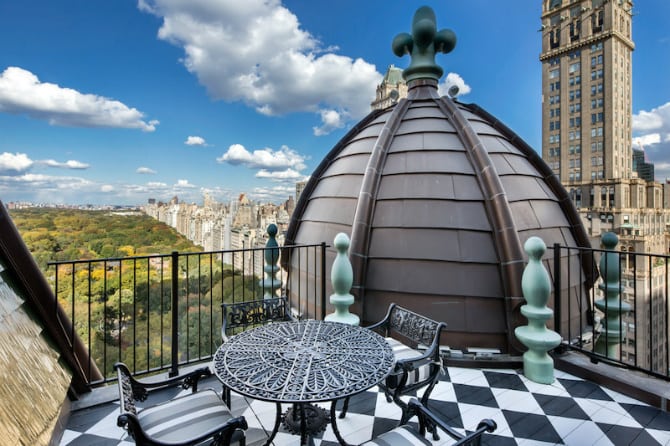 There are many excellent apartment buildings in Manhattan, but 15 Central Park West is a definite standout.

In late 2011, a 6,744-square-foot penthouse was bought there for a hefty $88 million. The apartment has 10 rooms including 4 bedrooms, a wraparound terrace of more than 2,000 square-feet, 4 bedrooms and 2 wood burning fireplaces and used to belong to former Citigroup chairman Sandy Weill. The asking price was met by Ekaterina Rybolovleva, daughter of Russian billionaire Dmitry Rybobovlev. Interestingly enough, the entire sum was pledged to charity by the previous owner. 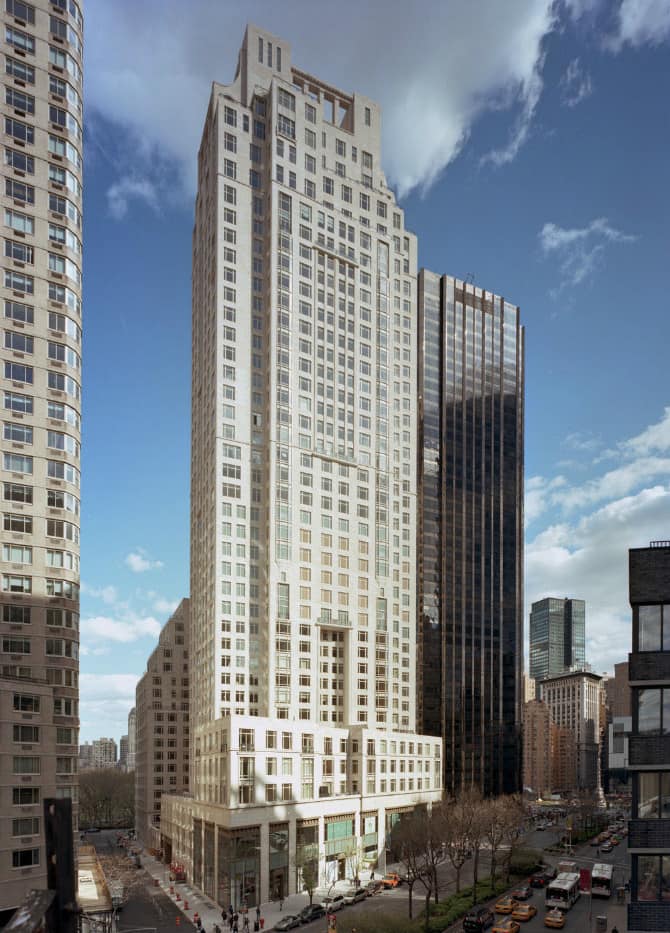 The opulence of Manhattan skyscrapers is legendary – and One57 is a perfect illustration of this.

While only recently completed, the ultra-luxurious tower has already sold two luxurious penthouses for undisclosed fees thought to be over $90 million. One of these, a six bedroom, 14,000-square-foot unit on the 75th and 76th floors, with 140 feet of frontage on Central Park, has a glass atrium with a wall that swings open and a living room with double-height ceilings. Though it’s hard to believe someone would not want the place for themselves, the buyers, led by billionaire hedge fund manager William Ackman, only made the acquisition as an investment – which means its price could get even higher! 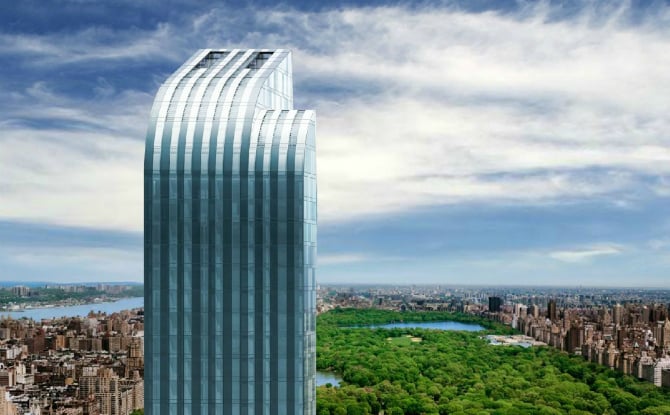 One of New York City’s most sough-after pieces of real estate are part of the 432 Park Avenue building, the tallest and one of the most luxurious in Manhattan.

The most impressive among the 104 condos offered by the building, the penthouse boasts high ceilings, 10-foot by 10-foot windows (for residents to adequately enjoy the stunning views from 1,200 feet high up in the sky), oak floors, marble worktops, and heated bathroom floors. The building also has its share of perks, including a gym, a 75-foot-pool, and a massage therapy room, as well the option to purchase a climate-controlled wine cellar. 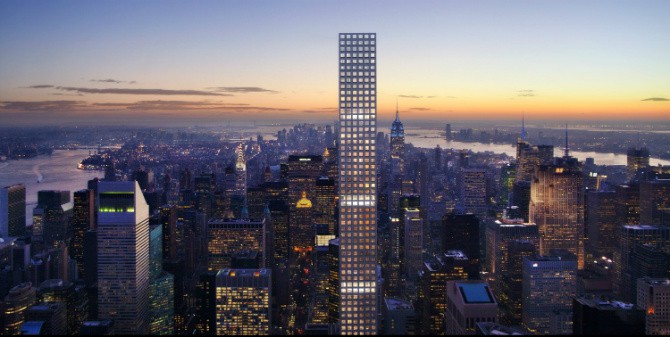 Part of the eye-catching CitySpire building, on New York City’s West 56th Street, this 8,000-square-foot octagon-shaped penthouse boasts six bedrooms and nine bathrooms. Acclaimed interior designer Juan Pablo Molyneux is responsible for the decorations, which are in some places reminiscent of a Roman villa.

This veritable palace in the sky spans three floors, including a separate guest apartment on the floor below. 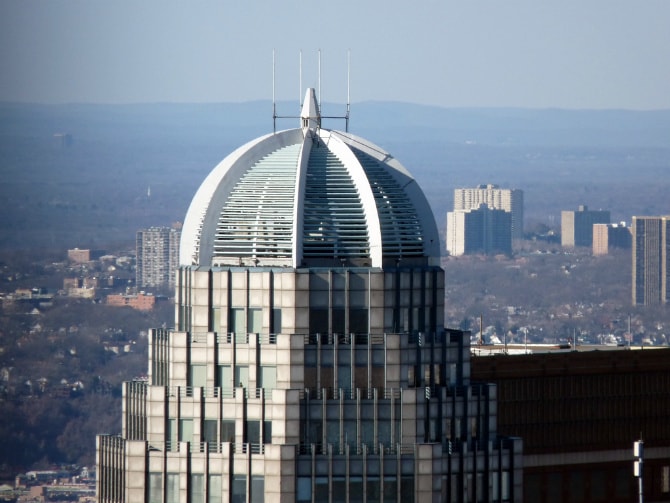 A few months ago we put together a list of the world’s most expensive streets. Surprisingly, the priciest real estate was not in London, Paris, Moscow, or Manhattan, but in Hong Kong, in a neighborhood called The Peak. This amazing penthouse, developed by Sun Hung Kai Properties, is just the kind of home which brought that average to such soaring heights.

The luxurious home, named (rather unimaginatively) House No 1, features a large private swimming pool, Jacuzzi, garden, and rooftop terrace, offering breathtaking views of Victoria Bay. There’s even an elevator to help the owners get around. At 4,661 square-feet, the apartment is by no means huge. But considering its hefty price tag, it is world’s most expensive dwelling per square foot. 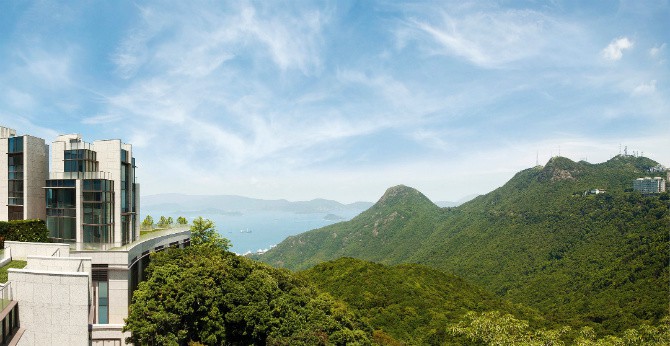 Sitting atop the Ritz-Carlton in New York, this penthouse comprises three separate apartments, which taken together might be the Big Apple’s most expensive home.

The unit has a total area of 15,434 square-feet, with an additional 2,193 square-feet of terrace. It is fully furnished and tastefully decorated, and boasts amazing views from the 400 feet of windows. There’s also an elegant staircase, which connects the two floors the apartment occupies. 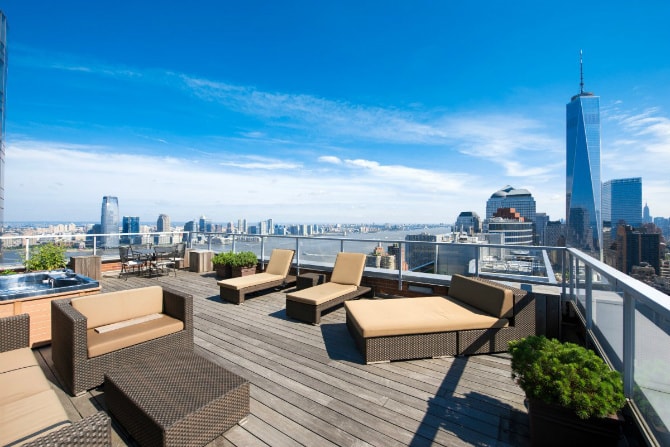 Recently completed in the affluent Knightsbridge area, in the heart of London, One Hyde Park is one the world’s most expensive apartment complexes. The project reportedly cost almost $2 billion, so it’s no surprise that it is home to some of the priciest residences in all of London.

This spring, one of the four penthouses (Penthouse D) at One Hyde Park became the most expensive flat ever sold in Britain when it was purchased by an unknown Eastern European billionaire for a staggering $237 million! And while the building does have some pretty impressive perks (24-hour residential concierge, a 21-meter stainless steel ozone swimming pool, and very high levels of security), the penthouse didn’t come with any furnishings, flooring, or even internal walls – the cost of which could be in the tens of millions. 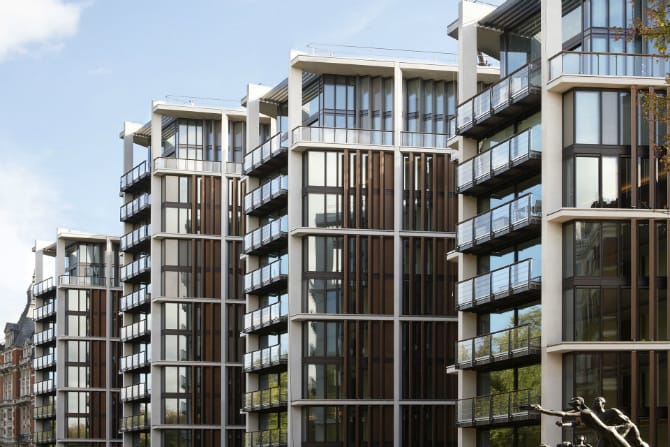 While the great global cities and financial centers of London and New York have their fair share of the world’s ultra-expensive penthouses, Monaco is certainly an attractive destination for the very wealthy, albeit more as a holiday retreat. That being said, the tiny principality is set to host the most impressive and expensive penthouse on the planet – on top of the new Odeon Tower.

The Odeon Tower is the one of the tallest residential buildings in Europe and the first skyscraper to be built in Monaco since the 80s – and the Sky Penthouse seems to justify that long wait. It boasts an incredible 33,500 square-feet of living spaces spread across five stories, with features like a gym, sauna, cinema, library, whisky bar, and billiard room. Most impressive of all (well, except for the scale of the entire thing) is the infinity pool with a water slide, from where the owners can enjoy the best views in all of Monaco. 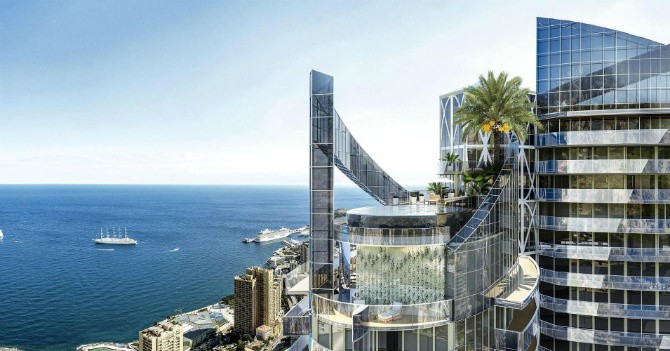