Our readers have probably been waiting for a list of the top 10 largest yachts in the world for a long time, and here it is. The prides of their respectful owners, these mind blowing yachts constantly roam the waters of the Middle East, the Mediterranean and Caribbean, depending on the season.

Priced at hundreds of millions, these yachts are some of the most amazing and luxurious things ever built. This list is surely going to change a lot in the next years, because new, fantastic, yachts are built every year, but at the moment, these are the top 10 largest yachts in the world in 2012. Let’s start with no.10. 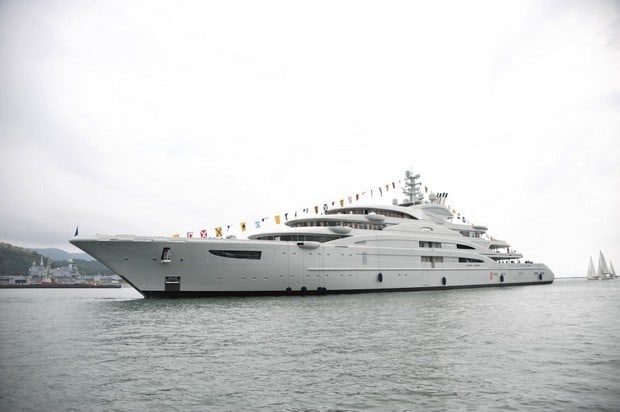 This motor yacht measures 134 meters in length and was launched by Fincantieri yachts in 2011. Espen Oeino was given the challenge to design this magnificent vessel’s exterior and to engineer it, while its interior is the work of Reymond Langton Design. The building process had started back in 2007, the Serene supposedly being one of the most technologically advanced superyachts ever built. If boasts with an 18.5 meter beam and a total of seven decks, in addition to the two helicopter landing pads, a massive internal water pool – adaptable to be used for tender docking – and storage for a large submarine. 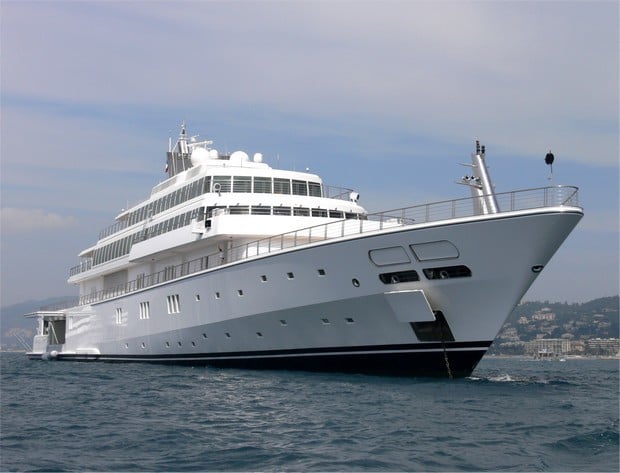 The Rising Sun is a proud motor yacht that measures 138.4 meters from top to toe, the equivalent of 454.1 ft. It was built in 2004 by Lurssen Yachts and boasts with a Sercombe Design–penned down interior. It has undergone a refitting process during 2007. With its steel hull and aluminum superstructure, along with a beam that measures no less than 18.5 meters (60.7 ft) and a 5 meter long draft (16.4 ft), the Rising Sun can reach the astonishing speed of 28 knots, being able to cruise at 26 knots. It can accommodate a total of 16 guests, assisted by a crew of 45. 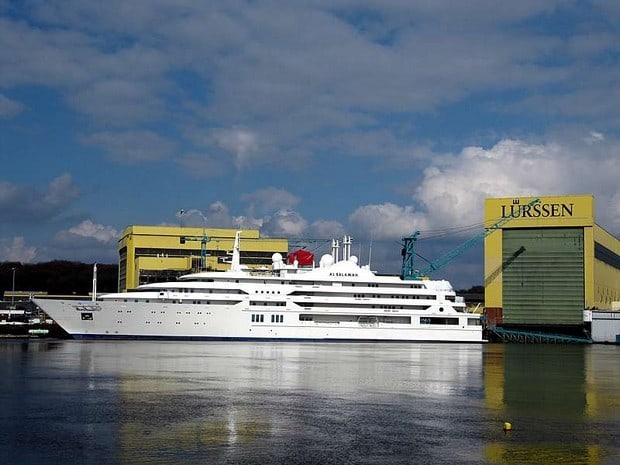 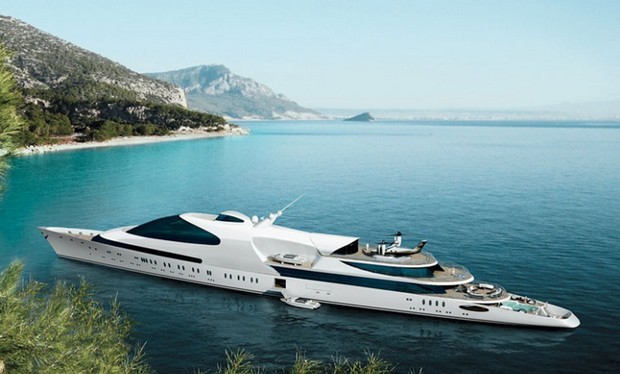 Yas, ADM Shipyard’s brainchild launched in November 2011 measures 141 meters in length. Initially named the Swift141, Yas was the largest yacht launched in 2011 and one of the most important to date. It boasts with a narrow profile built on a steel hull of a deprecated Royal Dutch Navy frigate built back in 1978.

The lightweight design and composite superstructure allows the Swift141 to reach speeds of 26 knots, backed by the modern diesel engines and variable-pitch propellers. Designed on the exterior and inside by Pierrejean Design, based in Paris, Yas features fluid curves, sleek lines and a massive surface covered in glass. It can host up to 60 guests and can cruise at a transoceanic range at 20 knots, thanks to its green fuel economy.

Previously named Mahroussa, the 145.72 meter (478.1 ft) long El Horriya motor yacht was built in 1865 by the Samuda Bros., based in London. Its extremely sophisticated exterior design and intricate engineering were possible thanks to the extensive work of Sir Oliver Lang. The latest refitting that concerned this massive vessel has been done in 1987. It can reach a top speed of 16 knots, cruises at 13 knots and can accommodate up to 160 crew members for the smoothest and the most relaxing cruises possible. 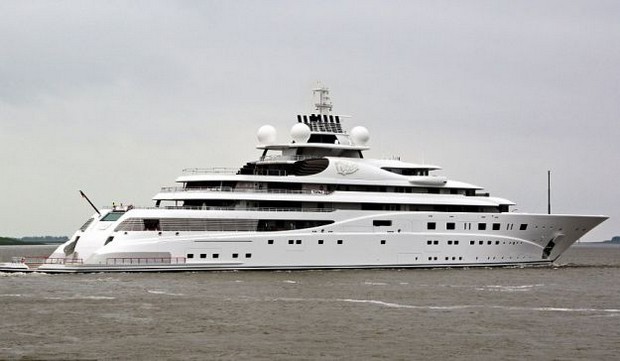 It was meant to be the 4th largest yacht in the world, boasting with an unofficial length of 147 meters (482.3 ft). It has recently left the construction site at Lurssen, in Bremen, Germany and is now ready to cruise through the most idyllic seas in the world. The technical and numerical data that characterize this yacht are at the moment hidden under a veil – all we know is that it measures somewhere between 144 meters and 147 meters in length, being the second largest yacht ever built by the fabled, German yacht manufacturer Lurssen, following the 155 meter Al Said. 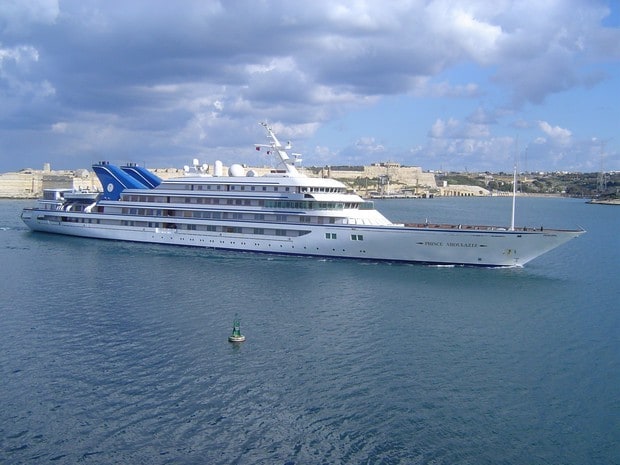 It measures a stunning 147 meters in length (482.3 ft) and was custom built by Helsingor Vaerft, from Helsingor, Denmark. Finished in 1984, its exterior design and engineering bear more sophistication than most of the vessels of today, thanks to Maierform Maritime Technology. Prince Abdulaziz’s interior was designed by David Hicks, while Maierform Maritime Technology tended to its exterior.

Having undergone a refitting process in 2005, it is equipped with a state of the art stabilization system, reducing the roll motion effect, thus creating a much smoother cruise. The yacht’s beam measures 18.3 meters in length (60 ft) and its draft – 4.88 meters (16 ft). Backed by a steel hull and superstructure, it can reach a maximum speed of 22 knots and a cruising speed of 18 knots. It is able to accommodate up to 64 guests and 65 crew members. 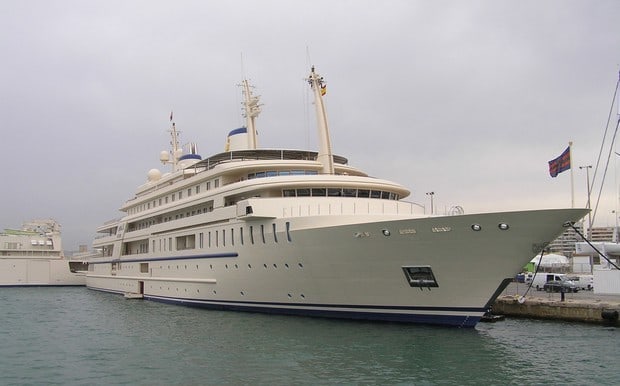 Custom built in 2008 by the same Lurssen Yachts from Bremen, which we’ve been mentioning for quite a lot of times during this article, it measures 155 meters in length. The Al Said motor yacht’s exterior was designed by Espen Oeino, while its interior bears the signature of Redman Whitely Dixon.

It boasts with a steel hull and aluminum superstructure, as her beam measures 24 meters (78.74 ft) and the draft – 5.2 meters (17.06 ft). The magnificent Al Said can cruise at speeds of 22 knots and offers accommodation for 70 guests, assisted by 154 crew members. 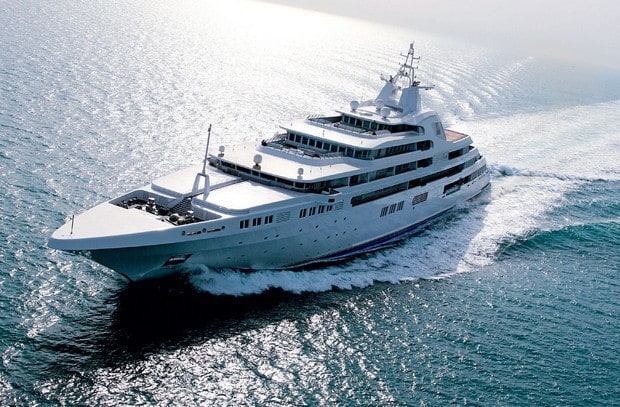 Built in 2006 by Platinum Yachts, the Dubai is the second largest private yacht in the world. It measures a whopping 162 meters and features an aluminum superstructure, steel hull and elegant lines, all penned down by the fabled designer Andrew Winch. Platinum Yachts tended to the super interiors of the Dubai, which mix together bold tones, rare fabrics and super, handmade mosaics. The showpiece of the yacht is a majestic staircase, which sports glass steps that automatically change color.

In addition, the Dubai boasts with a split-level owner’s deck, a number of VIP and guest suites, a huge social area comprising the main lounge with a large, red sofa as centerpiece, plus a crew area for up to 155 members. Overall, the Dubai features 7 decks, including a plethora of sunbathing spots, several Jacuzzis and a stunning mosaic swimming pool.

Furthermore, it can also host a helicopter of up to 9.5 tons along with two 10-meter long tenders. Its displacement goes as high as 9,150 tons, not a problem for the Dubai in reaching a top speed of 26 knots. The 8,500 miles range at 25 knot cruising speeds, thanks to its four MTU diesel engines, are the cherries on the cake for this magnificent vessel. 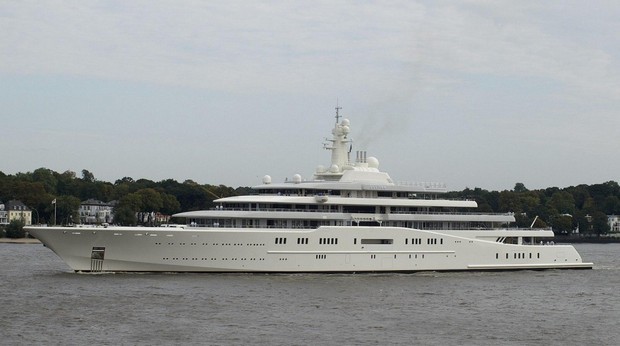 Owned by the fabled Russian billionaire Roman Abramovich, this immense vessel matches the expectances of the magnate. It can accommodate 36 guests in 18 cabins, in addition to the 70 members who carefully and actively ensure a relaxing cruise. Measuring 164 meters in length (538,06 ft), it has no problem in hosting a 3-man leisure submarine and two large swimming pools, of which one measures 16 meters in length and has an adjustable depth feature that can convert it into a dance floor.

Furthermore, there’s an exterior fireplace on the yacht, 6 tenders and enough room for 3 helicopters. The construction of the Eclipse had finished in 2010, at the Blohm + Voss shipyard, in Hamburg, while the interiors were penned down by Terence Disdale Design. Before its official launch, the yacht was covered by a curtain of secrets and mysteries, the pressing having done all sorts of speculations in connection to it.

Your mouths are definitely drooling by now and you’re probably supporting your dreamy heads with your hands. Stay tuned, though, as this list is going to be topped soon by the Azzam, which will reportedly measure 179.83 meters (590 feet) in length. And its price tag will be as stunning as its length – $620 million. See you all soon!