Home ‣ Fashion ‣ Back To The Future Shoes: The Entire Collection

Back To The Future Shoes: The Entire Collection 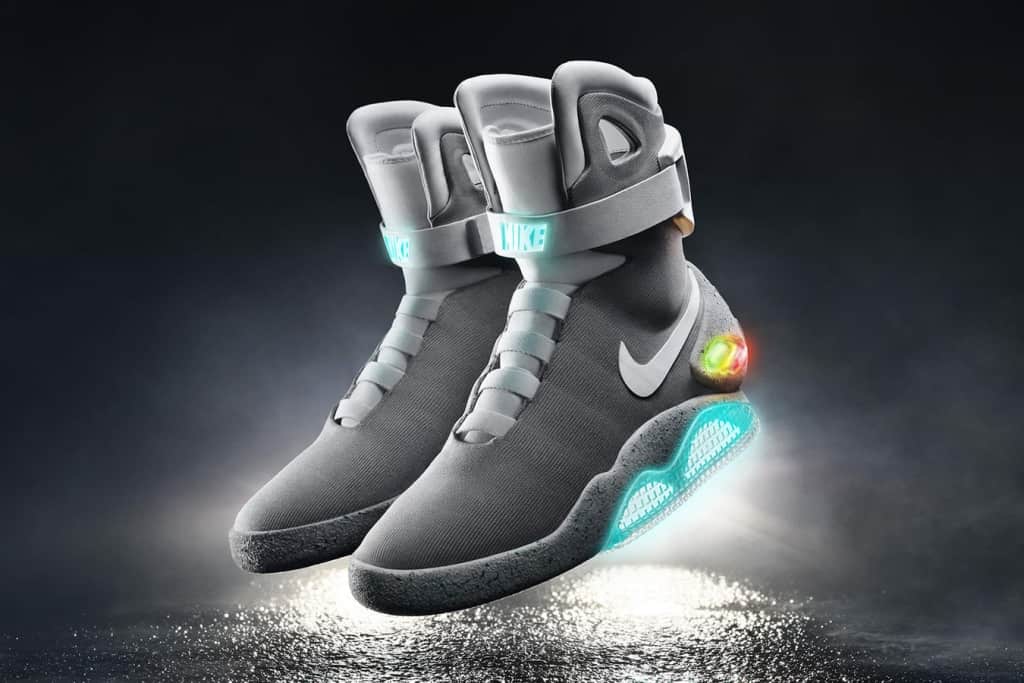 Nike’s self lacing Back to the Future II

For the die-hard fans of the movie franchise “Back to the Future”, you might be aware that Nike has been making Marty McFly shoes for the last few decades.

What is the big fuss about those shoes, you might wonder? 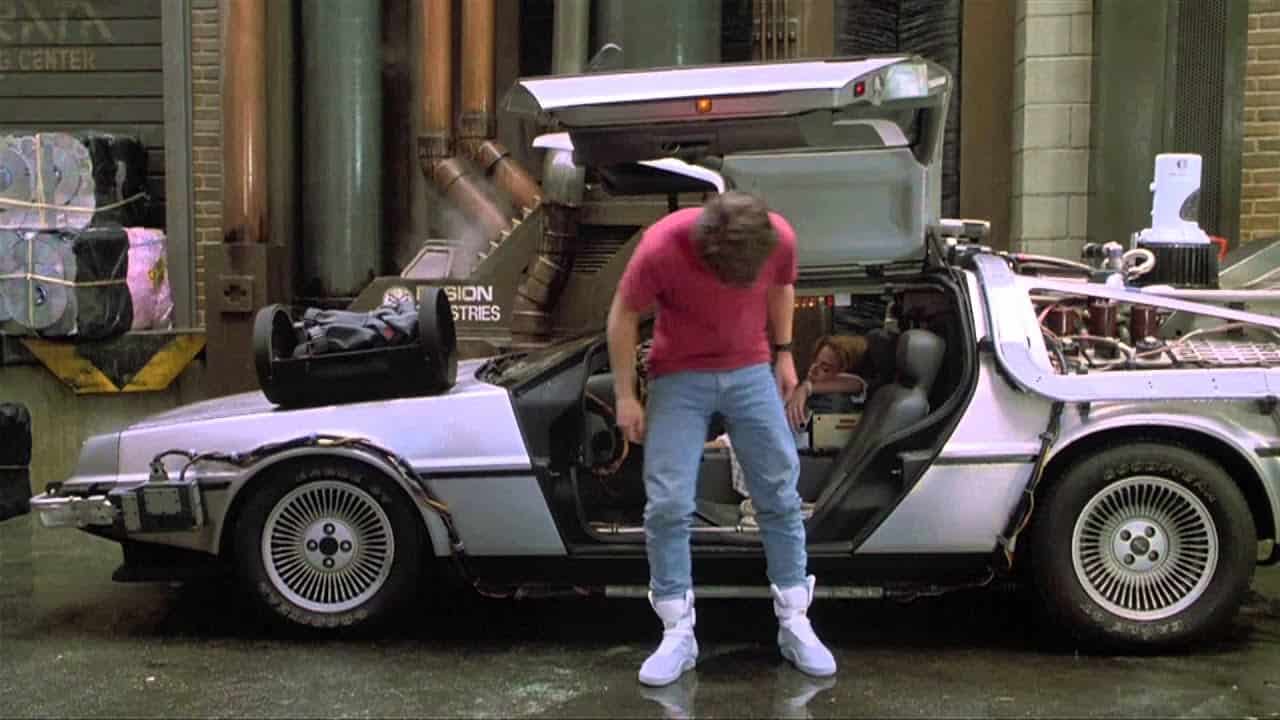 Back to the Future Screencap

They are the first pair of shoes ever produced that would lace themselves, and they light up as well. They were produced specifically for the movie, in which teenage Marty travels to 2015 using a scientists’ time machine. The original pair that Michael J. Fox wore in 1989 in the sequel sold for a whopping $92,100 in the summer of 2018, and the proceeds from the sale went to Michael J. Fox Parkinson’s disease foundation.

For those who don’t know, Michael J. Fox, the beloved actor that played Marty Mcfly was diagnosed with Parkinson’s disease in 1991, not long after the third Back to the Future was released. He created the foundation that carries his name, and the money is used to further research in order to find a cure, and help with the treatment of those in need.

There are a few versions of these Back to the Future shoes that Nike produced over the years, and we will take a look at the history of this awesome collection today. In 2011, Nike came up with the MAG replica shoes of the original model. If you don’t own a pair yet, you might get lucky and be able to grab any of the versions of those futuristic shoes that Michael J. Fox a.k.a. Marty McFly popularized in the 1980s.

For the movies’ 35th anniversary, they released an updated version of the Nike MAG. TheParkinson’s foundation raised $6.75 million from the sales of these shoes, and Nike is surely proud to have taken part of that. They don’t only create beautiful and cool shoes, but they try to come up with solutions for people with special needs that have a hard time tying their shoelaces.

Now let’s take a look at those famous sneakers. We’ll start with the collector’s “Back to the Future” pieces, then we will present to you the other franchise inspired models that are a little more accessible than the original ones. 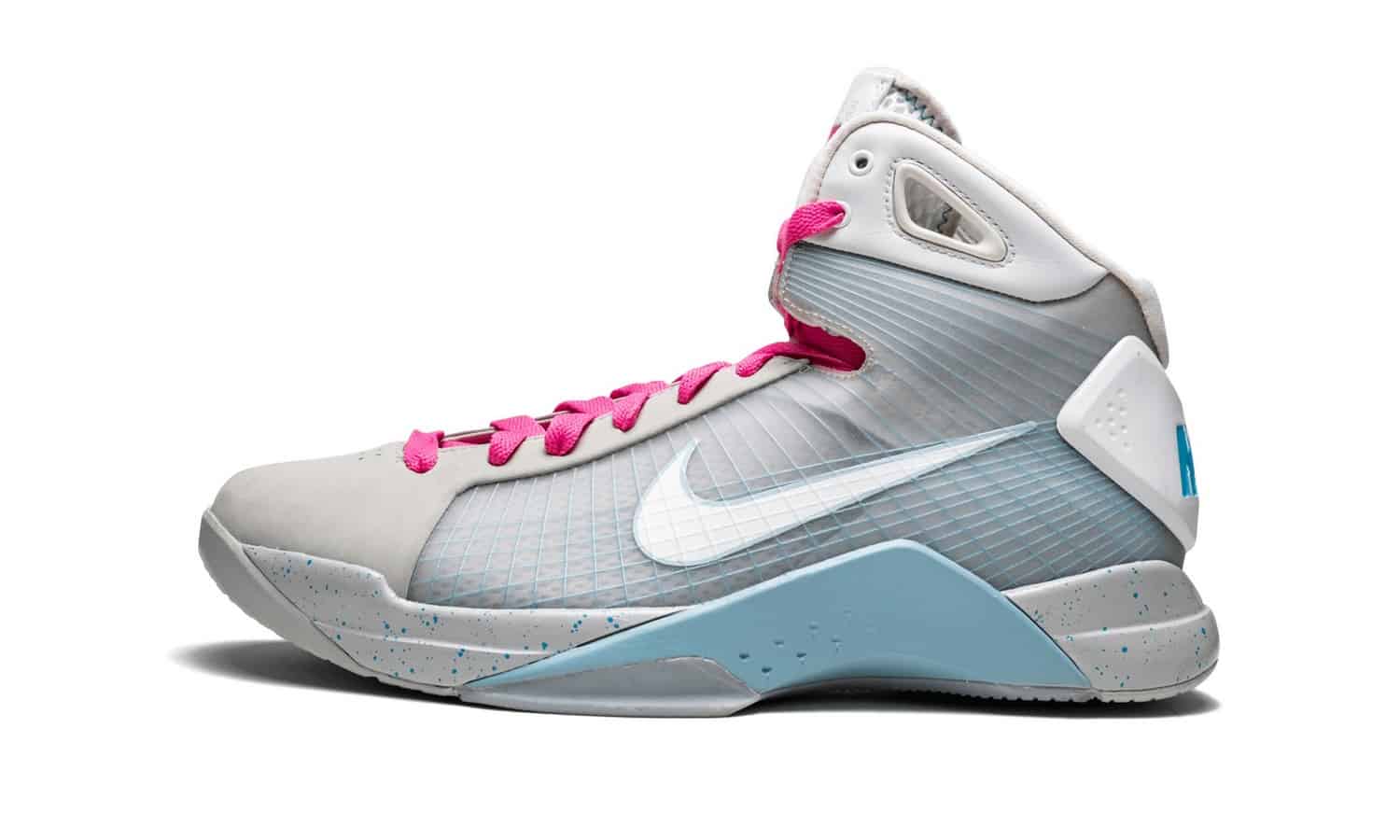 The original shoes worn in the sequel were seen in Kanye West’s “Good Morning” video, where an animated bear was rocking the shoes. In 2008, Kobe Bryant wore the “McFly” Hyperdunks at an LA venue, and sparked an idea in Nike, but the new version of the shoe only came to fruition in 2011.

Since germinating the idea from a few years back, Nike introduces the MAG, and produces 1500 replicas of the original “Back to the Future” sneaker. All those shoes were auctioned off to charity, and Nike raised at this time $5.695 millions for Parkinson’s Research. You can probably find a pair on the resale market if you’re in luck, but be prepared to dish out anywhere from $7500 to $10,000 US. 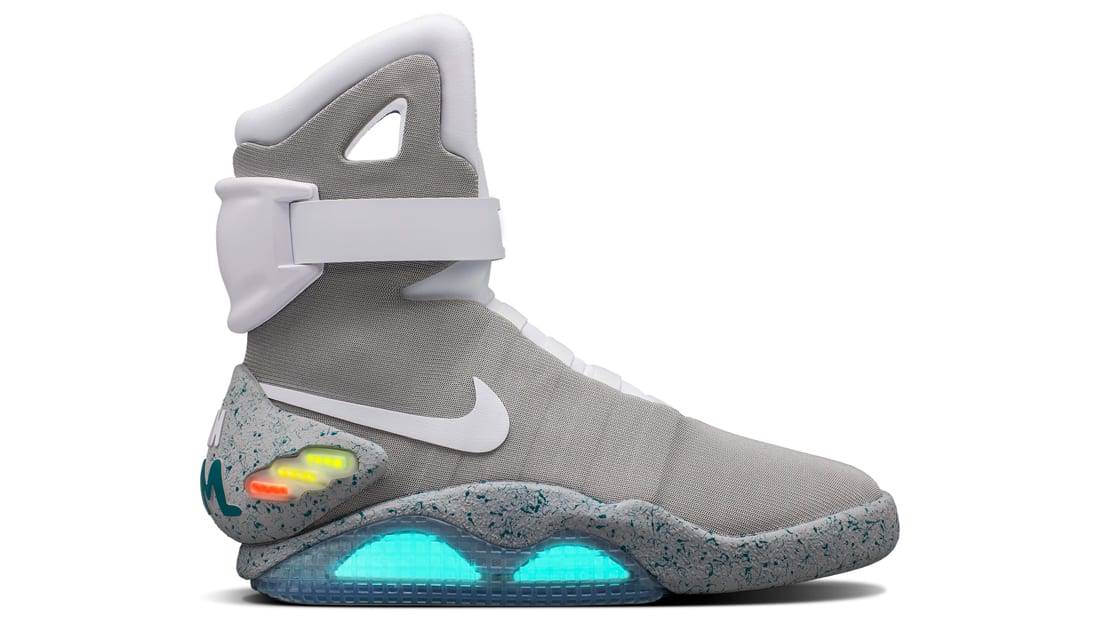 This time around, Nike only produced 89 pairs of the new and improved “Back to the Future” MAG. They introduced the Adaptive Fit technology, which is another term for “Power laces”.

What this does is that it senses the motion of the person wearing them and either release or tighten the laces accordingly. Since there are so few models of this version on the market, if you do get your hands on a pair, they go for around 24K, and they were pairs that sold for up to 50K. 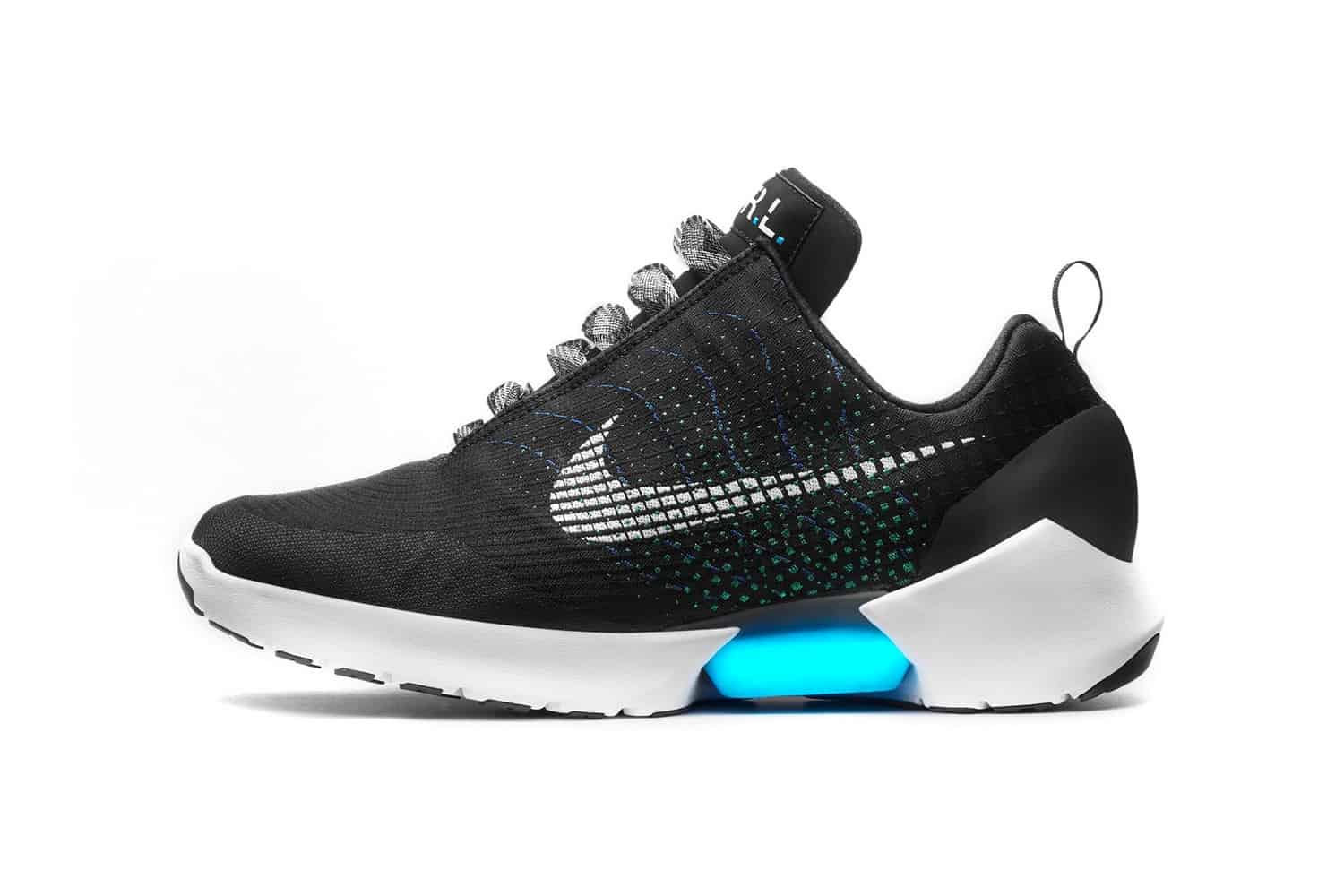 The HyperAdapt 1.0 version was introduced in 2016 as well, and their increased popularity and more reasonable price point prompted a sequel, which was released in 2019. Those shoes go for $300-$795 US, and they are easier to find than the MAG “Back to the Future”. 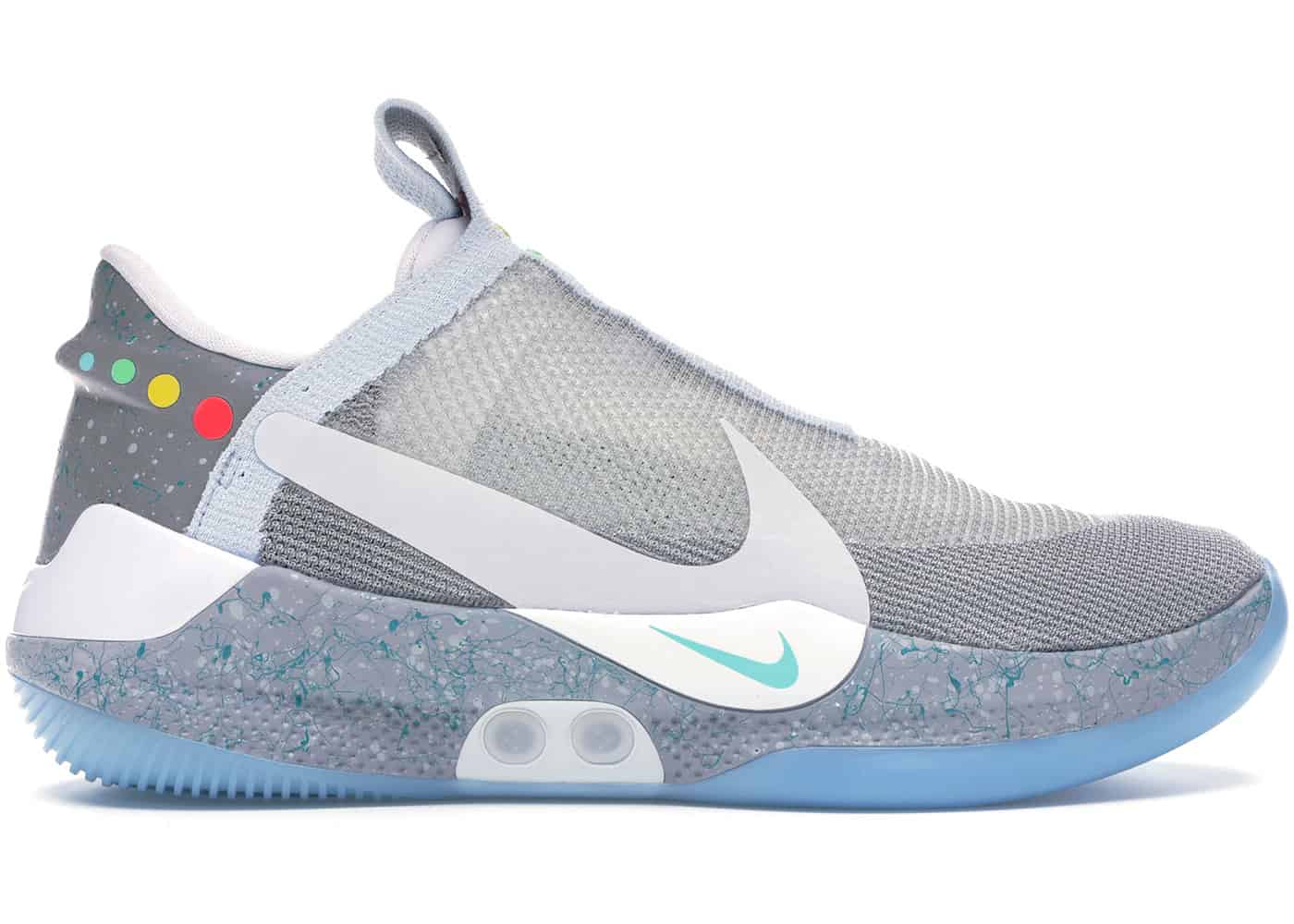 Laceless sneakers are nothing new, and Nike would like to bring a more accessible version of the original seen in the “Back to the Future” franchise. With the Adapt BB, they modernized the look and made it customizable by using built-in buttons through an app. 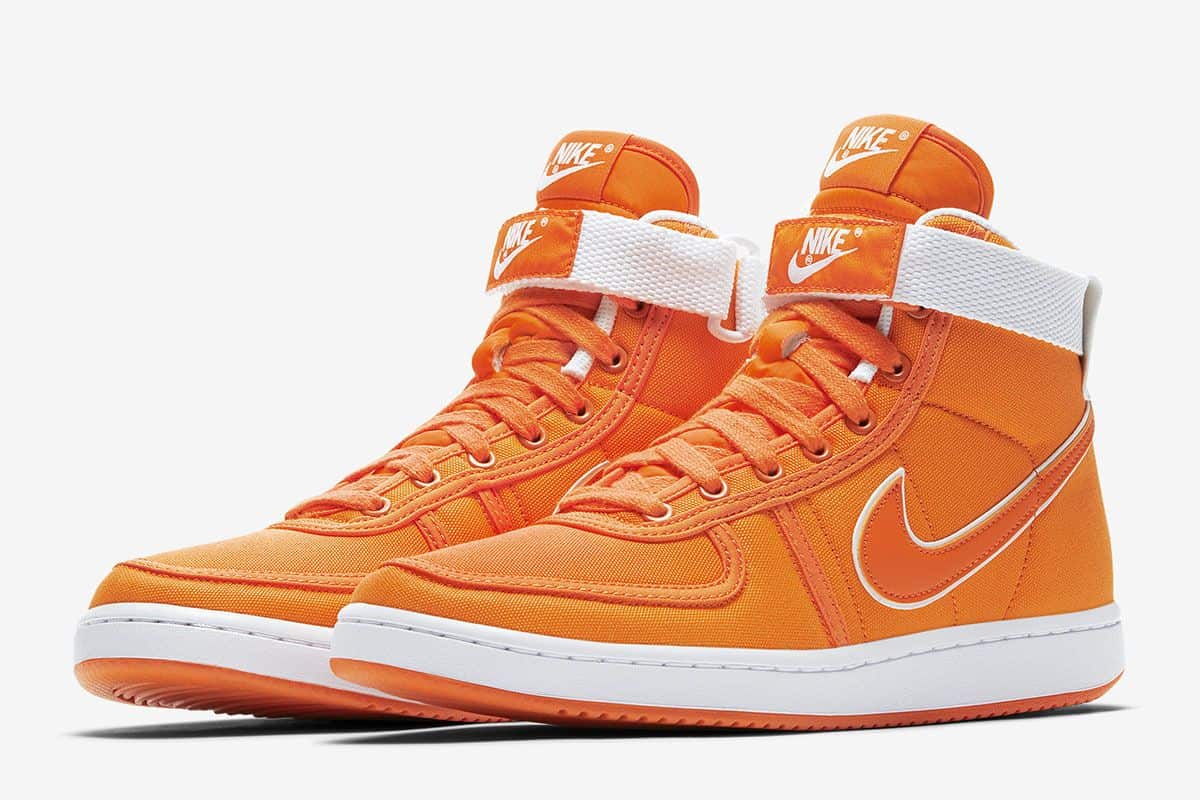 These cool kicks, made in orange with white accents were first released in 2017. The Doc Brown look-alikes that were so popular in the first movie were eye-catching, and so are those. A lot more accessible and reasonably priced, so go ahead and get yourself a pair! 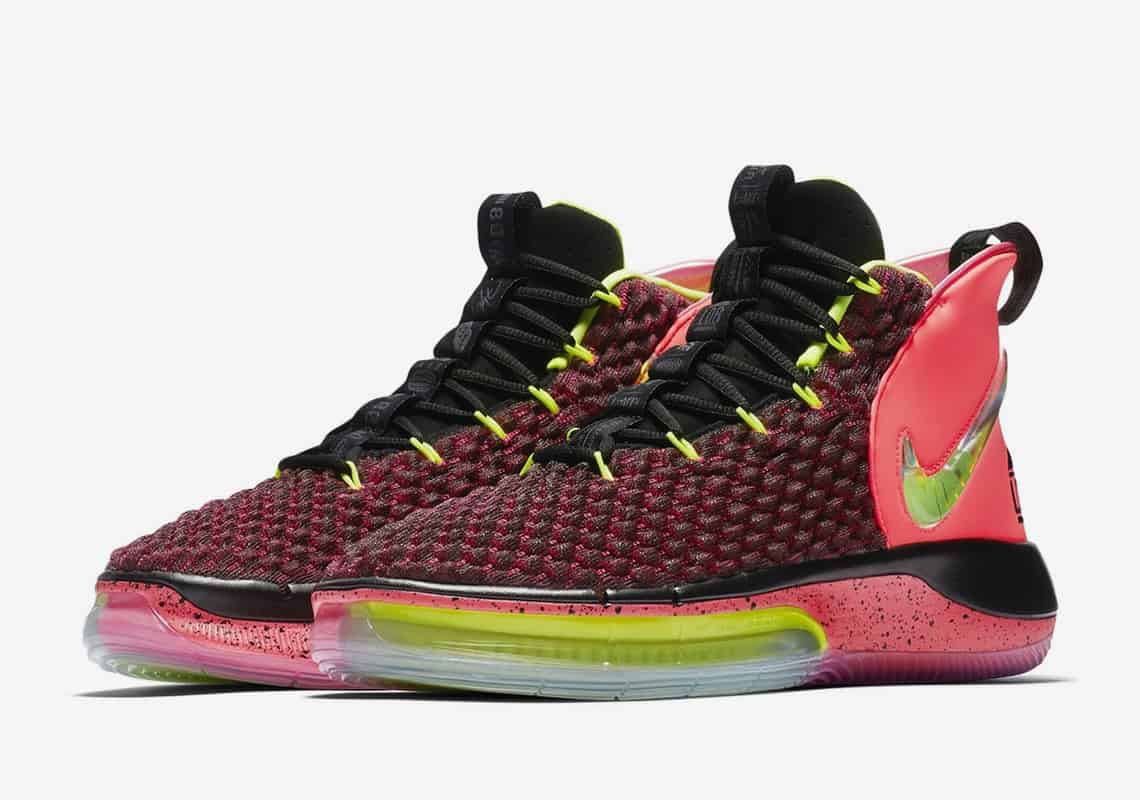 The hoverboard Marty was riding during the movies was another popular and cool gadget many wished they could get in real life. Although the hoverboard is not meant to be just yet, we can settle for the sneakers that are made from the same bright color palette as his beloved means of transportation. The AlphaDunk Hoverboard features a front Zoom Air unit, a translucent Swoosh and a unique design. 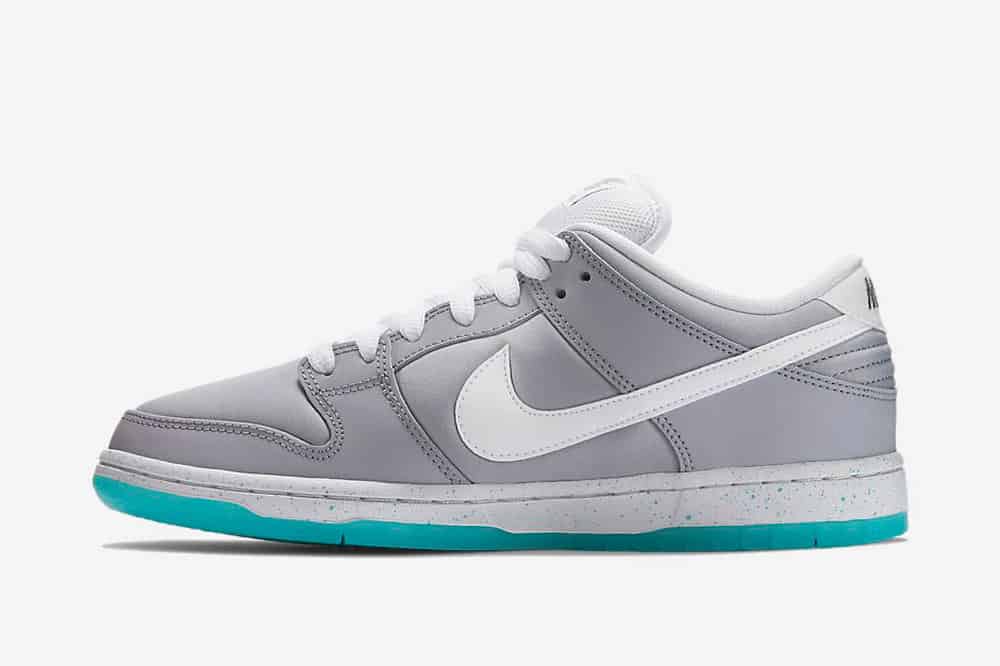 This more subdued model is inspired by the sneaker Marty wore in the second movie was released in 2015. The speckled detail and the translucent outsole as well as the grey with the white swoosh and laces give this shoe a more day to day look. On the insole you can find a design referring to Marty’s hoverboard. 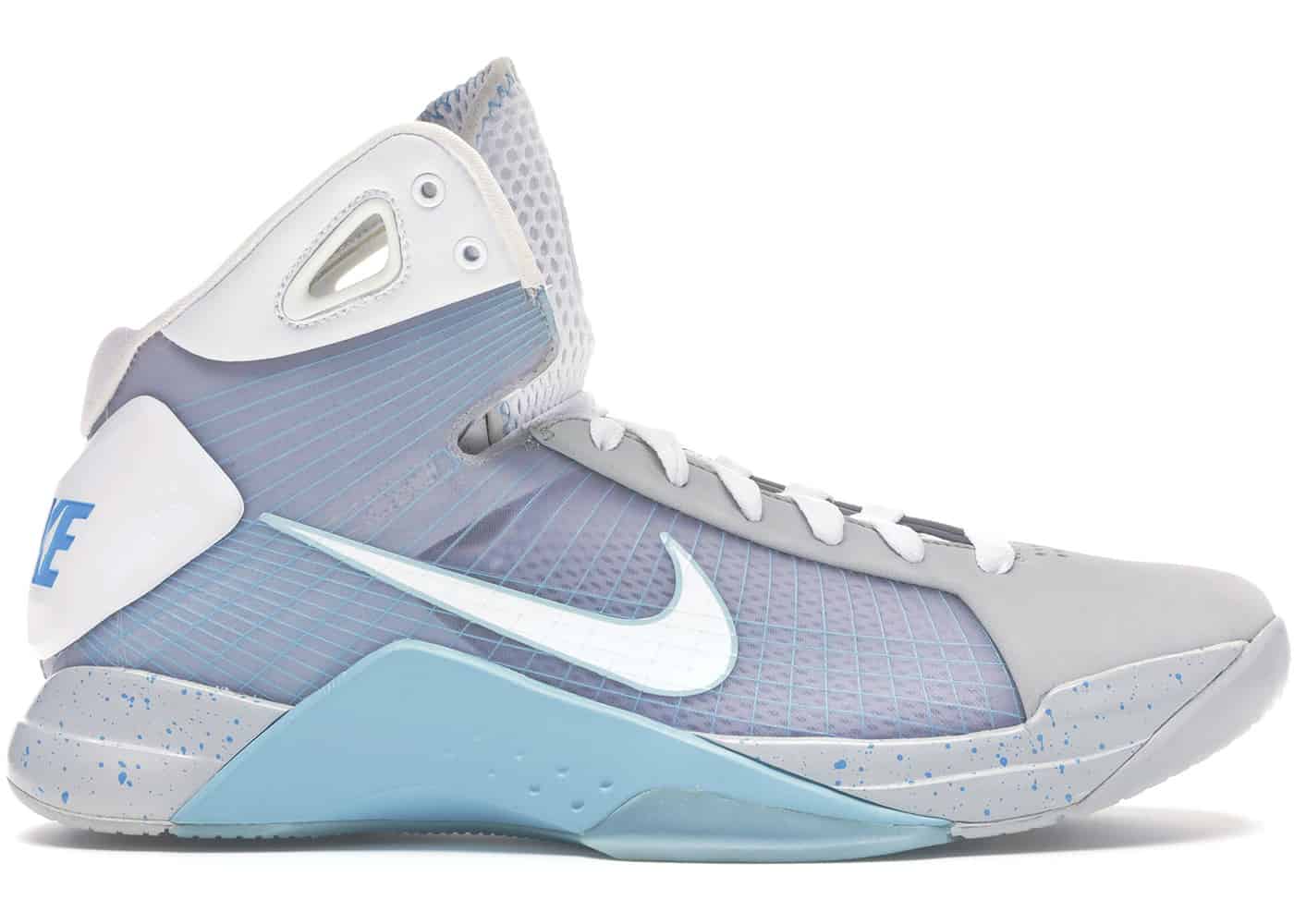 This shoe was released in 2008, and Nike decided to only produce 350 pairs. This super limited edition was inspired, once again, by the Nike Mag. The glow in the dark outsole is a reference to the Mag’s LED lighting, which they reproduced to give it a similar effect. The tongue of the shoe is inscribed with the dates when Doc made the time leap. A cool homage to the franchise, n’est-ce pas?

Now that we showed you the eight versions of Nike’s fabulous Back to the Future shoes, which ones would you like to own? A collectible pair, or the franchise inspired ones? 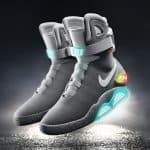 Nike’s self lacing Back to the Future II 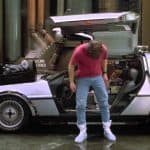 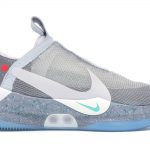 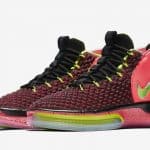 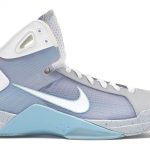 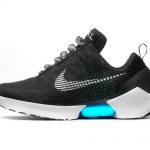 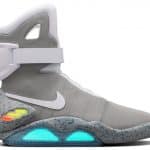 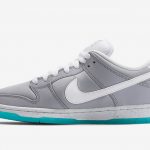 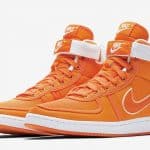 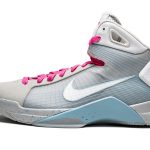