10 of the Most Stunning Private Jets Revealed in 2015

There are definitely more ways than one to show off your social status right now, and purchasing a stunning private jet is surely one of the most extreme choices. Some of these private jets stand out thanks to their amazing performances, while others simply amaze us with some of the most luxurious features you could think of.

If you want nothing but the best, here you can take a look at the 10 most impressive private jets featured this year on Luxatic. 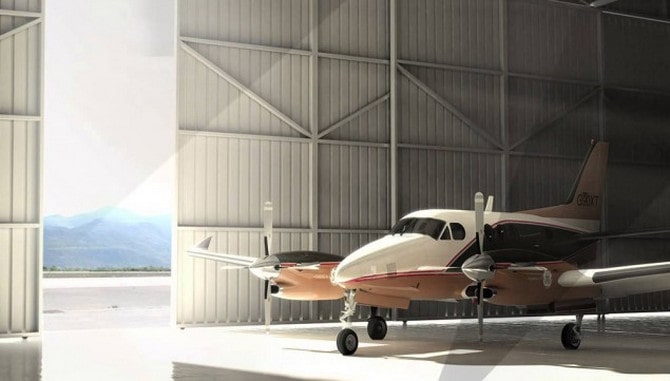 The Cleveland-based Nextant Aerospace introduced this year the Nextant G90XT Turboprop Plane. Based on a Beechcraft jet, this is the second jet to receive a complete makeover from this company, which promises a ravishing and secure flight experience for up to six passengers and two pilots.

Featuring high tech Garmin G1000 avionics system, with three large LCD screens, as well as the latest in digital communication and entertainment and a lot of cabin upgrades like digital pressurization or dual zone air conditioning, this plane delivers a smooth flight and a unique experience: 1,400 miles of nonstop, comfortable travel, while cruising at around 322 mph. 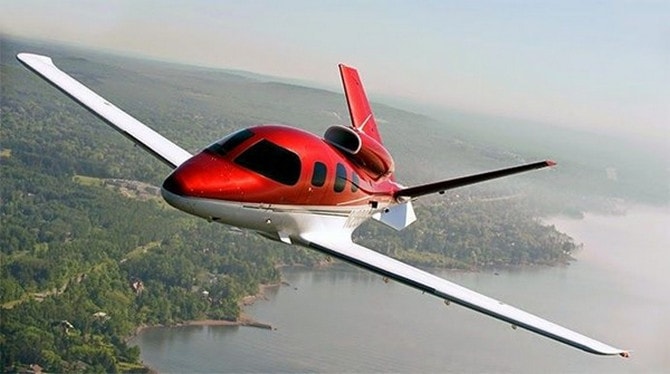 The Vision SF50 is a revolutionary personal jet, intended for customers looking for something between high-performance piston singles and super light jets. With a cruise speed of 300 KTAS (knots true airspeed) and state-of-the-art avionics, as well as an all-carbon fiber structure, this excellent airplane is pretty impressive.

Designed to be easily flown and operated, the Vision SF50 also boasts ample interior space, with enough room on board to comfortably accommodate up to five adults and two children. The Cirrus Vision SF50 is in a league of its own and it’s probably flying over your house right now. 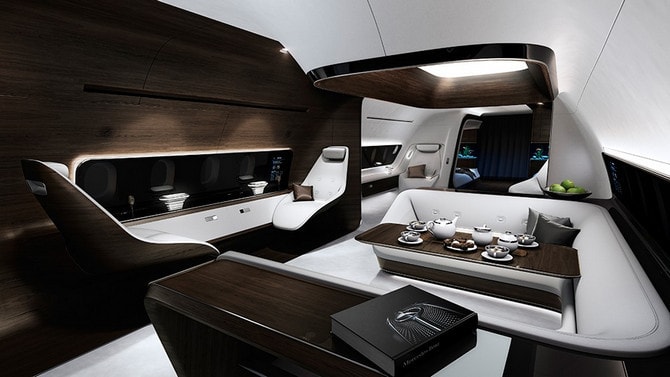 I know this is not exactly a private jet per se, but Mercedes-Benz has decided to raise the bar on luxurious private jet interiors, teaming up with Lufthansa Technik for a showstopping interior concept. These two major companies have teamed up for the very first time, taking the beautiful Mercedes design language and turning it into a futuristic interior for a Lufthansa jet.

The incredible result is a jaw dropping jet, combined with a luxury hotel, with the narrow jet cabin featuring windows that are concealed by so-called black panels, similar to the Mercedes-Benz S-Class design. Expect to see this concept put into play the next time a millionaire asks for something unique and classy. 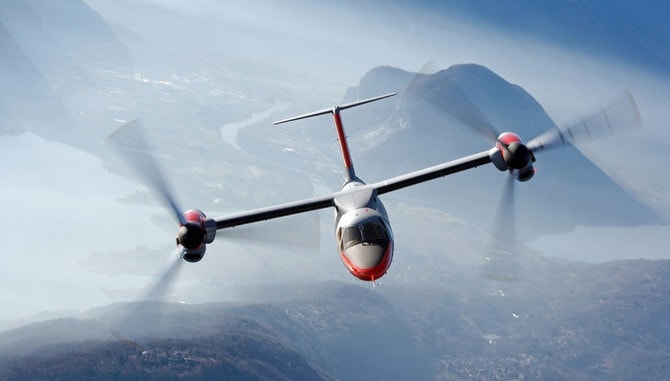 The AgustaWestland Tilt-rotor aircraft is a true masterpiece, designed to take off like a chopper and fly smoothly like a plane. After many years spent developing helicopters for military use, the Anglo-Italian aircraft maker has hit the civilian market, with this executive version of their AW609 TiltRotor.

Designed to carry up to nine passengers in a comfortable pressurized cabin, this amazing little plane is faster than a regular helicopter and features an extended range. AgustaWestland announced that their TiltRotor is the quickest way to travel over distances between 57 and 575 miles, with a cruising range of up to 750 miles.

Inside the modern cockpit, the AW609 TiltRotor will have a two-pilot crew, with fly-by-wire controls and Rockwell Collins Pro Line Fusion Avionics. 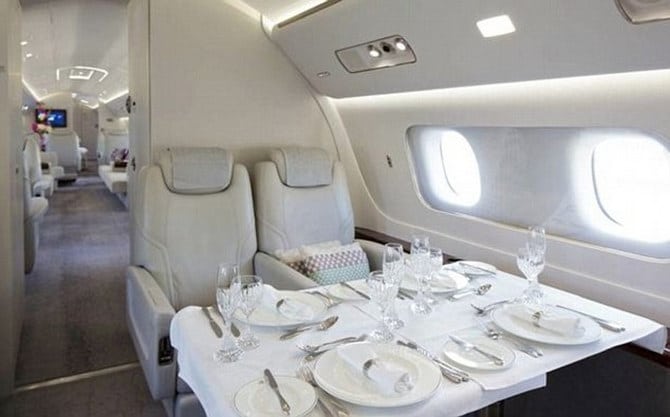 Spending £34 million on this luxurious private plane could be a sound investment or a waste of money – your choice. However, we are here to state that the Embraer Lineage 1000E is the ultimate statement of wealth, designed to cater to royalty and powerful politicians alike. Its cabin has been divided into five areas, including a master bedroom complete with a queen bed and a dreamy walk-in shower.

The central living area features white leather banquettes and fine wool carpets – but you can obviously personalize it as you wish. iPod docking stations, televisions, Blu-ray players and Wi-Fi are all part of the package, not to mention 323 cubic feet of storing space.

The aircraft’s staff will happily accommodate up to 19 passengers, and Embraer will easily fly a distance of 5,300 miles (8,529 km) at 543 mph, so there are plenty of beautiful  destinations to choose from. 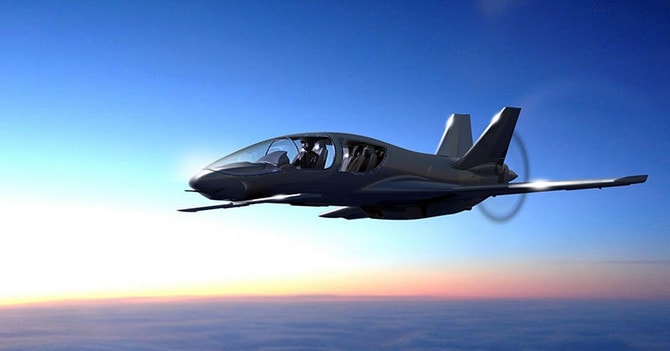 San Francisco-based Cobalt aircraft company is planning to transform private flying with a new range of planes that is stylish, sleek, modern and incredibly fast. Their latest project, the Valkyrie, is able to reach speeds of up to 480 km/h, and comes in two types of engine classes, both of them featuring a five-seat capacity and a completely custom interior and exterior.

This innovative private aircraft is not only technologically advanced and safe to fly, but also extremely luxurious. And although the exterior design of this private jet has been influenced by classic fighter jets, the interior features hand-stitched leather seats and a simple dashboard layout with only one on/off switch. Let’s fky! 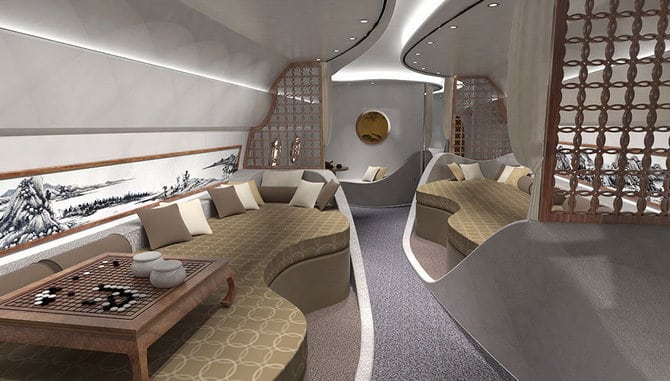 The Chinese design firm Haeco Private Jet Solutions is responsible for one of the most breathtaking private-jet interior designs ever. Inspired by the ancient philosophy of Feng Shui, this private jet interior celebrates the harmony between people and their environment. Imagined for a Boeing Business Jet 2 cabin, passengers will enjoy 1,025 square feet of cabin space in the truest sense of the world.

The Xiao Yao living areas include a master bedroom, a spacious lounge, a dining room and several alcoves for playing Mahjong and serving tea. The cabin’s lines have been replaced by a free-flowing layout, with an amazing curved walkway and natural color palettes, not to mention various eco materials, for that warm, welcoming atmosphere. 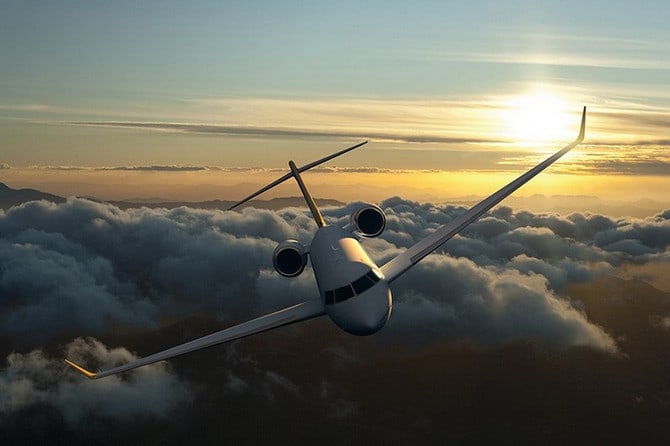 Bombardier’s latest Global 7000 luxury jet will easily take you from London to Singapore non-stop. This luxurious aircraft is a rule breaker, featuring the first true four-zone cabin that can be configured to suit leisure or business needs, upon needs. Offering nothing less than complete and utter comfort, this plane provides uncompromising accommodations.

It’s well worth mentioning that passengers flying on the Global 7000 aircraft will experience a superior high-speed cruise of M 0.90. The Global 7000 business jet also comes with an amazing range of 13,520 km or 7,300 nm, which means it can connect Geneva to Honolulu and London to Singapore in one flight. 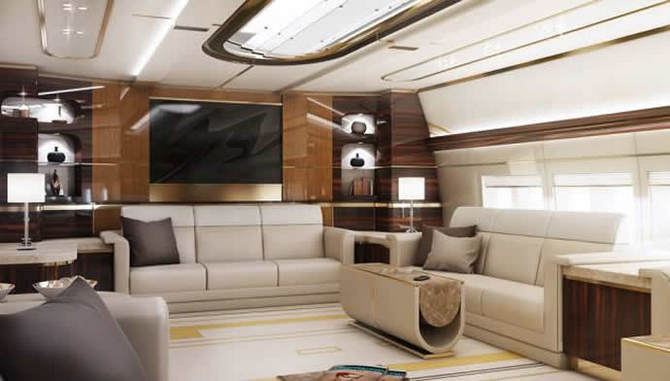 Introduced at the end of 2011, the Boeing 747-8 is an aircraft of many superlatives: it is the largest iteration of the 747 range, as well as being the longest passenger aircraft in the world. As such, the American-based company Greenpoint Technologies fully redesigned the aircraft’s interior, making it resemble a luxurious private ship.

The project was completed in December 2014 and reportedly the client back a massive $250 million – aside from the original $370 million paid for the standard Boeing 747-8. Sure, there was a lot of space to work with, and these images only give us a mere glimpse of what the owner of this beauty might enjoy on his or her trips around the world. 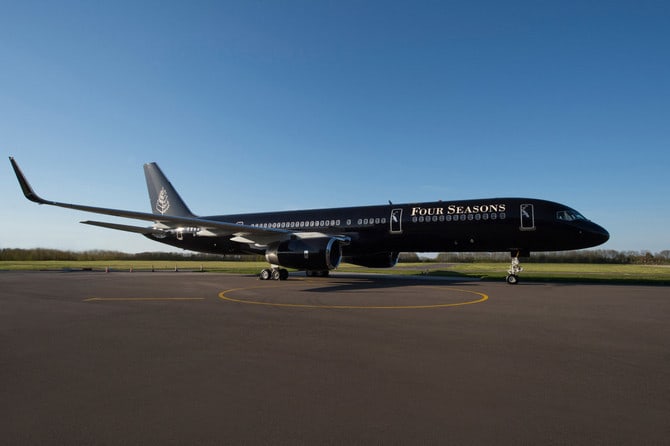 Four Seasons has went even further this year and unveiled their own luxurious version of a private jet. Based on a Boeing 757, this amazing plane was inspired by “caviar and champagne” and was customized to look exactly like a high flying luxury hotel.

Complete with a Four Seasons-trained cabin crew, including Four Seasons chef Kerry Sear, the plane also comes with a doctor, a concierge manager and even a photographer on board, thus allowing passengers to enjoy the same Four Seasons experience they’ve been used to – even at 30,000 feet up in the air.

As such, a Bvlgari toiletry kit, high quality headphones from Bose and a leather travel journal are also part of the package. Enjoy!

Tags:
Previous Article
10 Impressive Bikes Which Took Over The World In 2015
Next Article
10 Breathtaking Hotels & Resorts We’ve Featured In 2015