The Top 10 Most Expensive Nerf Guns Ever Made

Starting back in the 80’s with a foam ball, Nerf has made history in the world of toys, with dart blasters becoming synonym with Nerf guns. They’re the benchmark when it comes to those kinds of toys. And they did it so well that today they’ve become collectibles, with some of them worth quite a lot. Yes, some of those plastic guns are cherished even today by lots of people from all over the world.

Now, there are basic Nerf guns and there are heavily customized Nerf blasters, with the latter becoming more and more common these days, which makes them even more valuable as collectibles because of their uniqueness. The functionality and the play possibilities they open are two other factors that increase their price.

Should you find a Nerf gun in its original box, know that you’ve found a treasure, because the value for some of these guns unopened in their original boxes can go for several hundred dollars.

If you’re at least curious about these toys, take a look on our list of the top 10 most expensive Nerf guns ever made: 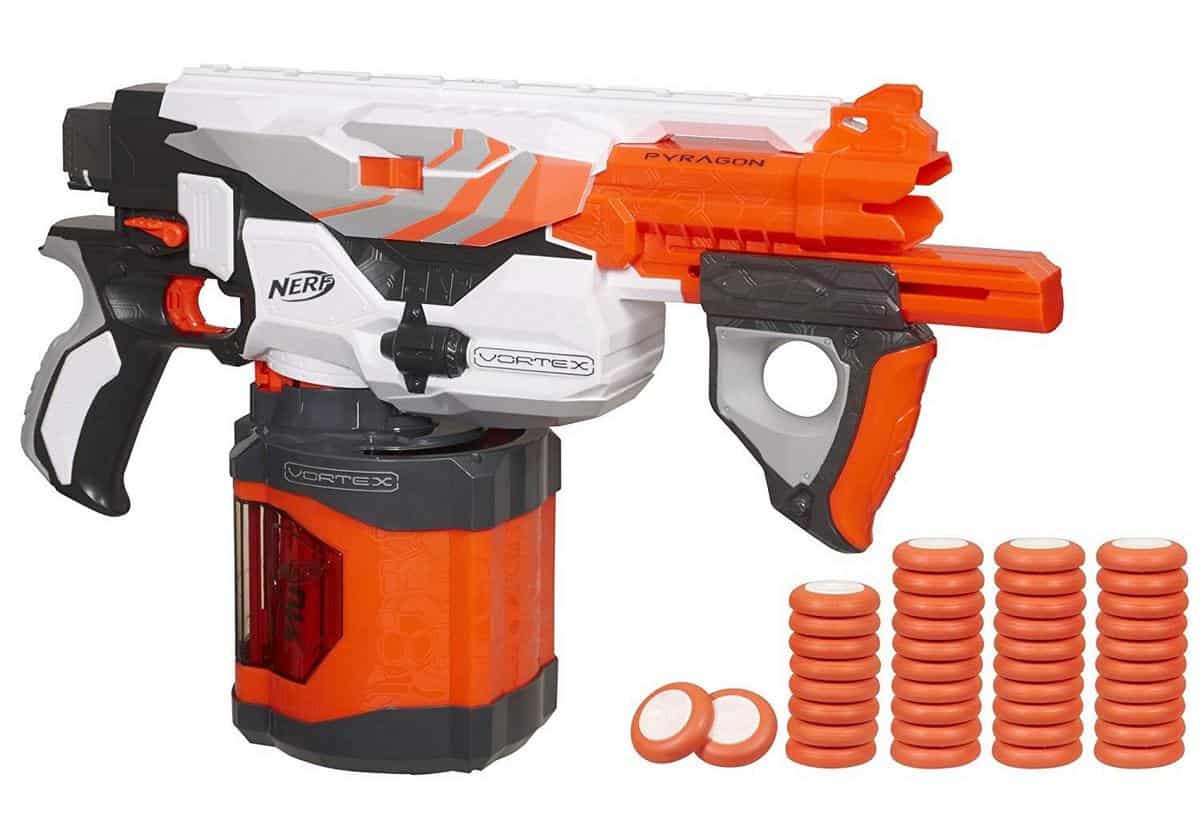 The Vortex Pyragon is a disc-shooting Nerf gun, and it’s one of the best ever made. With a fully mechanical performance, the Vortex uses a slam-fire mechanism to shoot discs, with an impressive speed and good accuracy. It has a magazine of 40 discs and comes as well with a tactical rail for other Nerf accessories to be attached. The price rises to around $230. 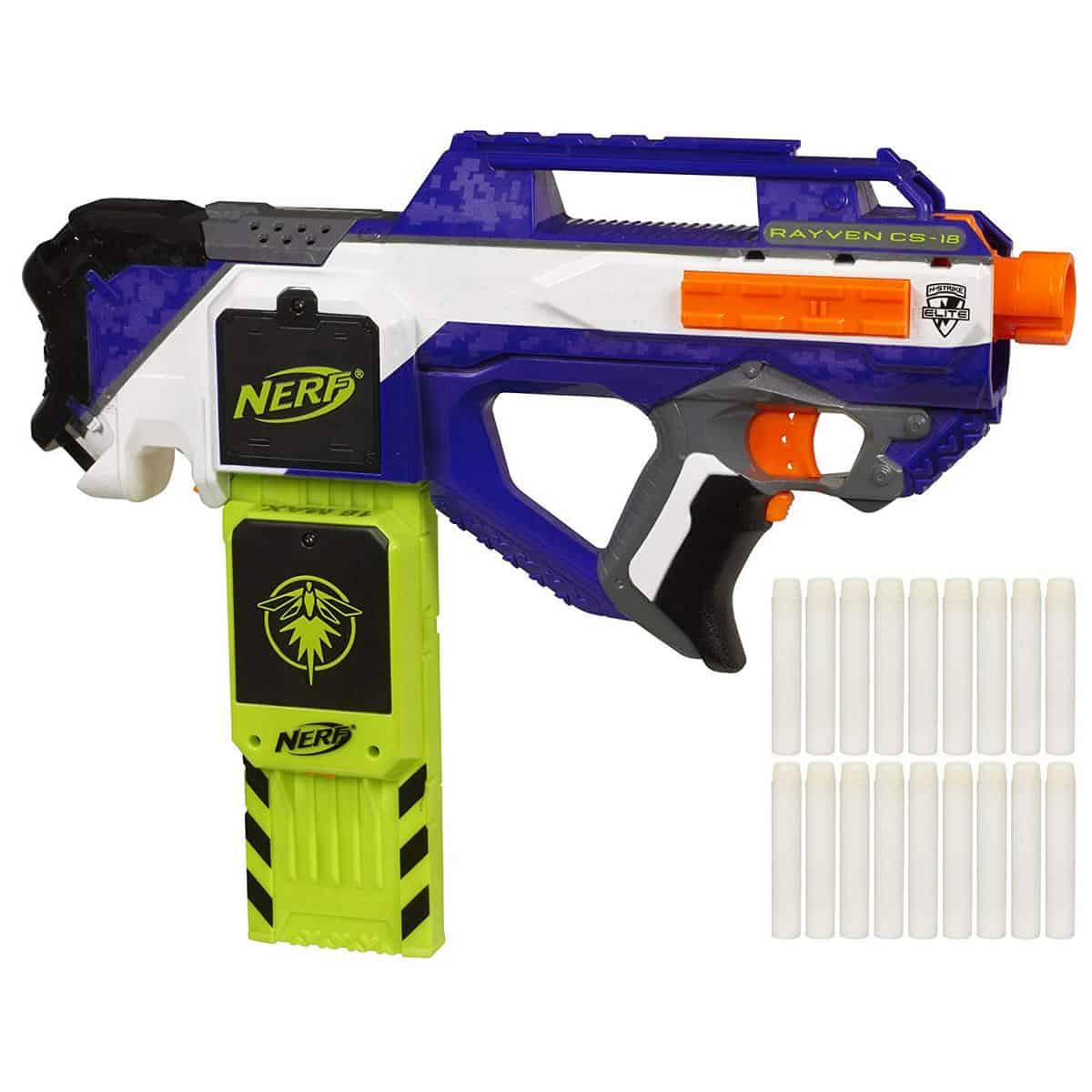 The N-Strike Rayven CS-18 brought an interesting twist for Nerf gun lovers. It fires glow-in-the-dark darts, making it perfect for night dart battles. The clip holds a total of 18 darts and uses an electronic fire mechanism. The average price spins around $235. 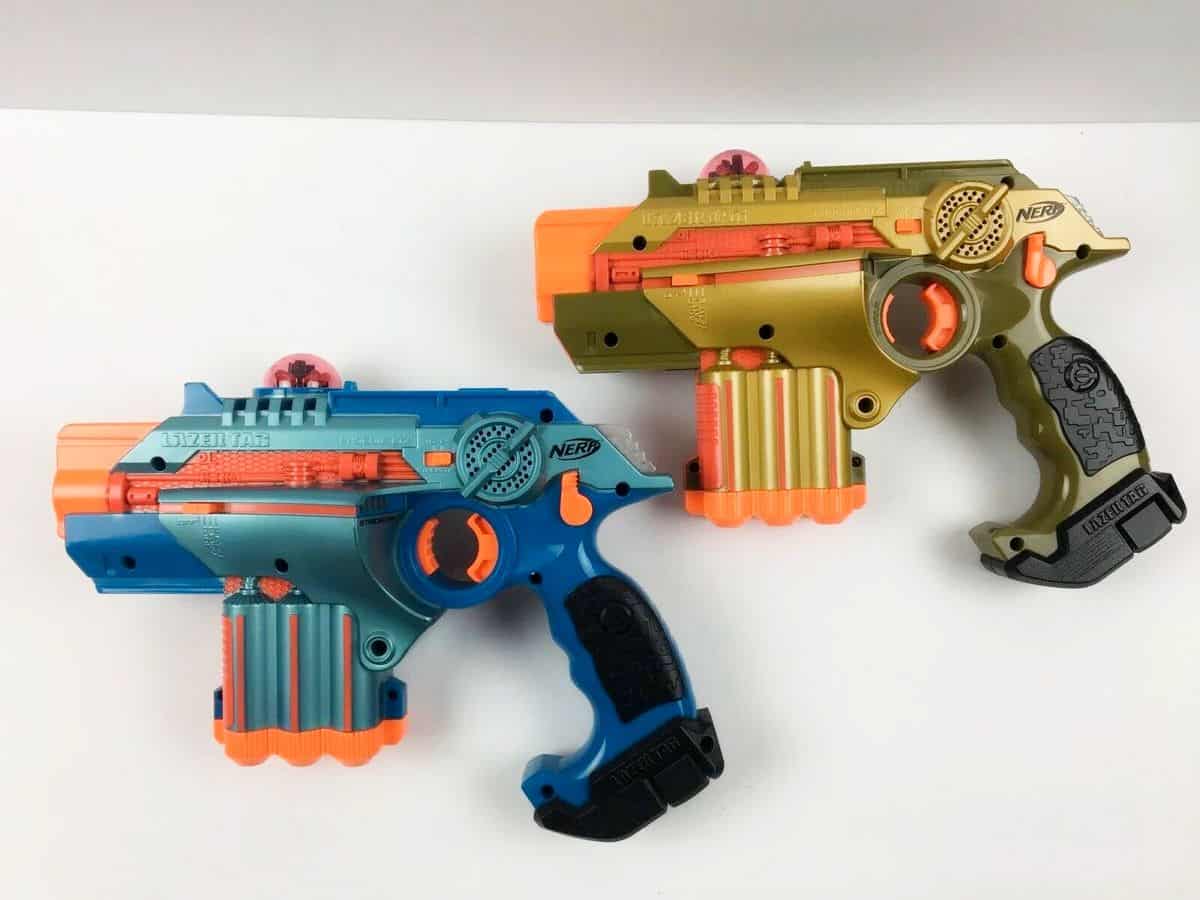 While not really a Nerf gun with its usual foam projectiles, the Lazertag System comes with two Phoenix LTX laser taggers. As features, there’s rumble and recoil, setting it apart from other laser tag guns available on the market.

Each of the two guns can have pinpoint sights attached to it. What’s the deal with it, you might ask? Well, think about not having to pick up hundreds of darts after the battle ends. The price tag rises to $250. 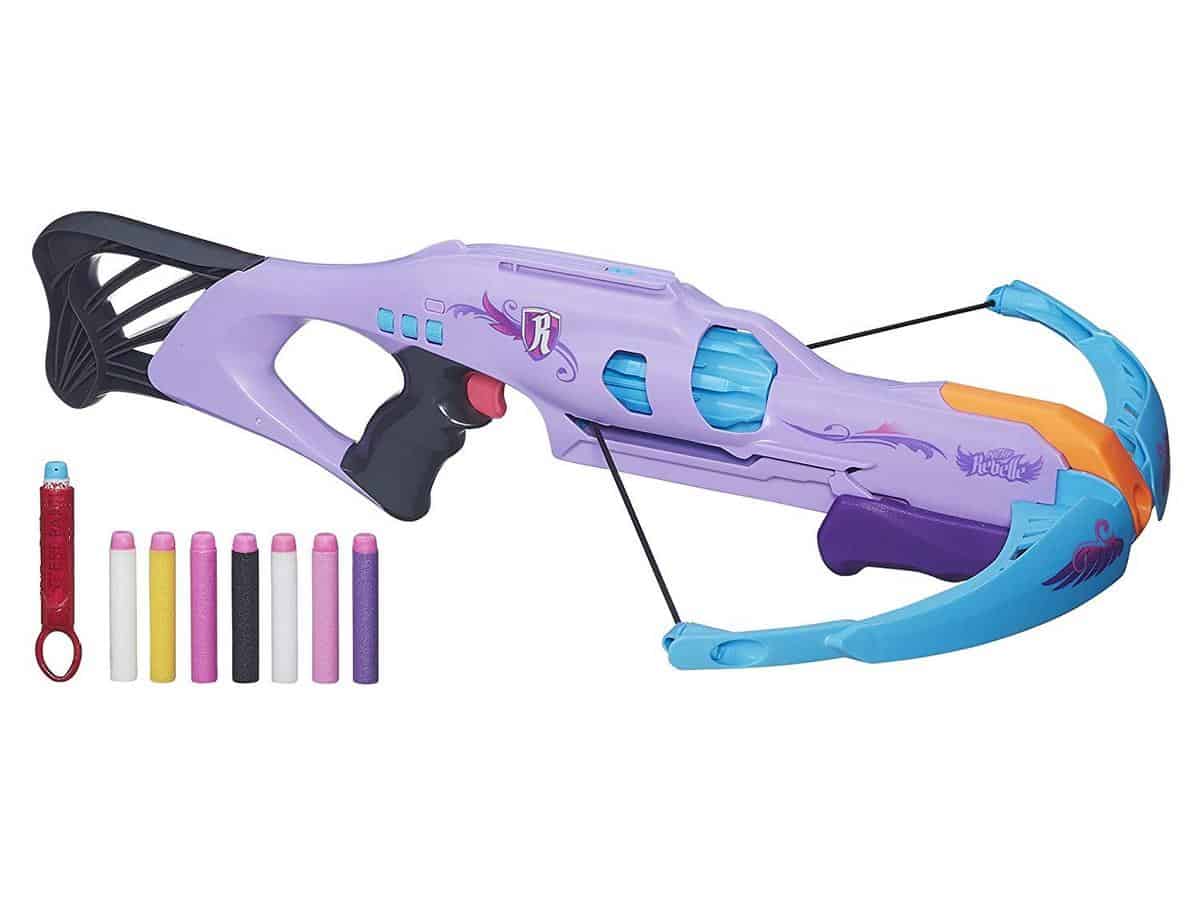 Released back in 1995 under the Kenner brand, later acquired by Hasbro, the Original Nerf Crossbow – in purple – was sold in the past for a mere $25. Nowadays, they can go for up to $250.

The piece is valued highly by those fans who love to mod and customize their guns, so if you happen to have one lying around, think about the 10 times its value increased with time. 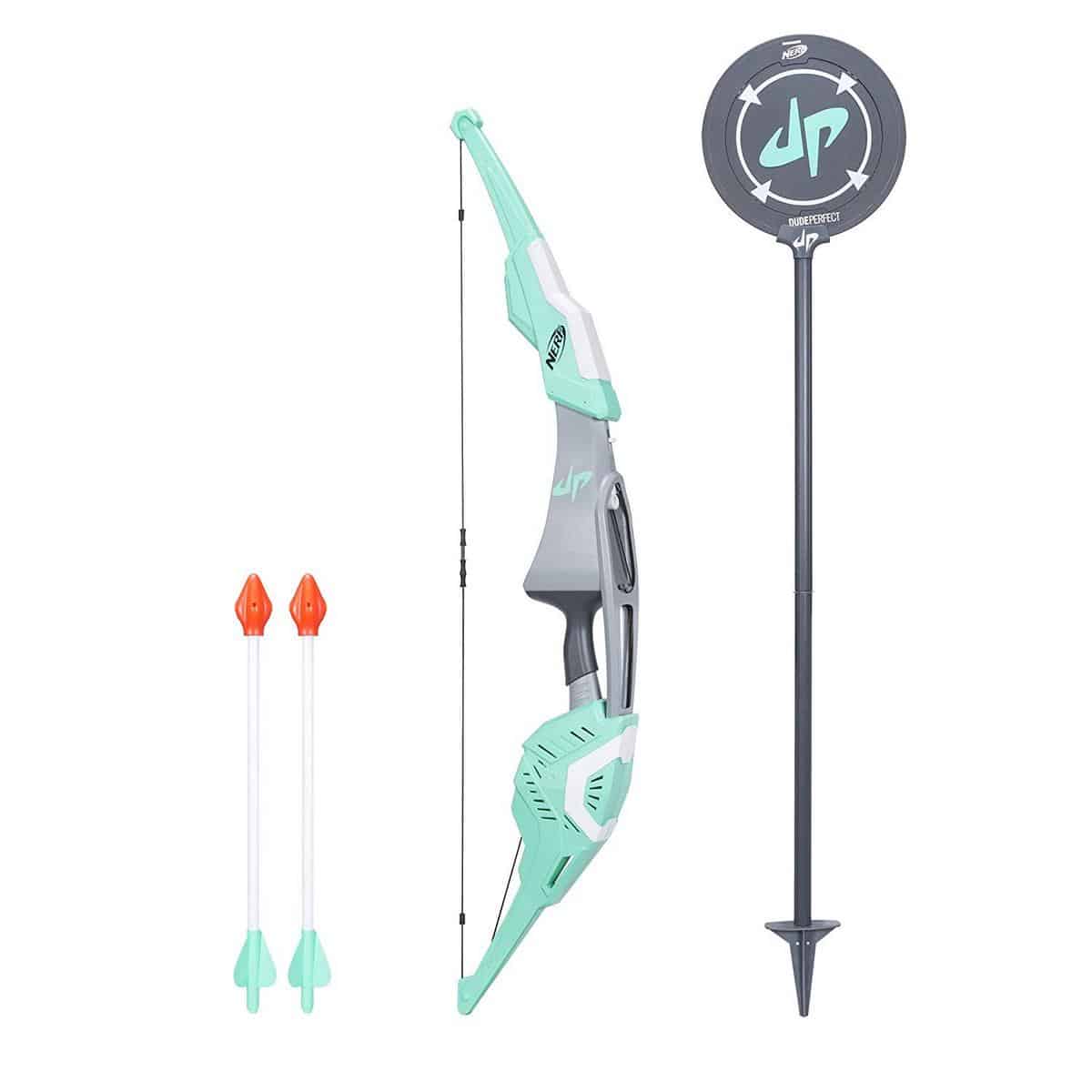 A more recent addition to the market of Nerf blasters is the Nerf Dude Perfect Signature Bow, which was released in 2017. Hasbro has partnered with a super popular YouTube channel – Dude Perfect – to create this biggest and farthest-firing blaster ever. Or at least that’s the hype around it. That’s also what sets it apart and grows its value to somewhere over $250.

With a pump handle mechanism, the long-named N-Strike Whiteout Series deploy CS-6 comes with six round quick-reload clips for fast and accurate shooting. The pump-handle can also be converted to a flashlight, and the design is one to envy those players who own such a Nerf gun. The price tag is a good $300. 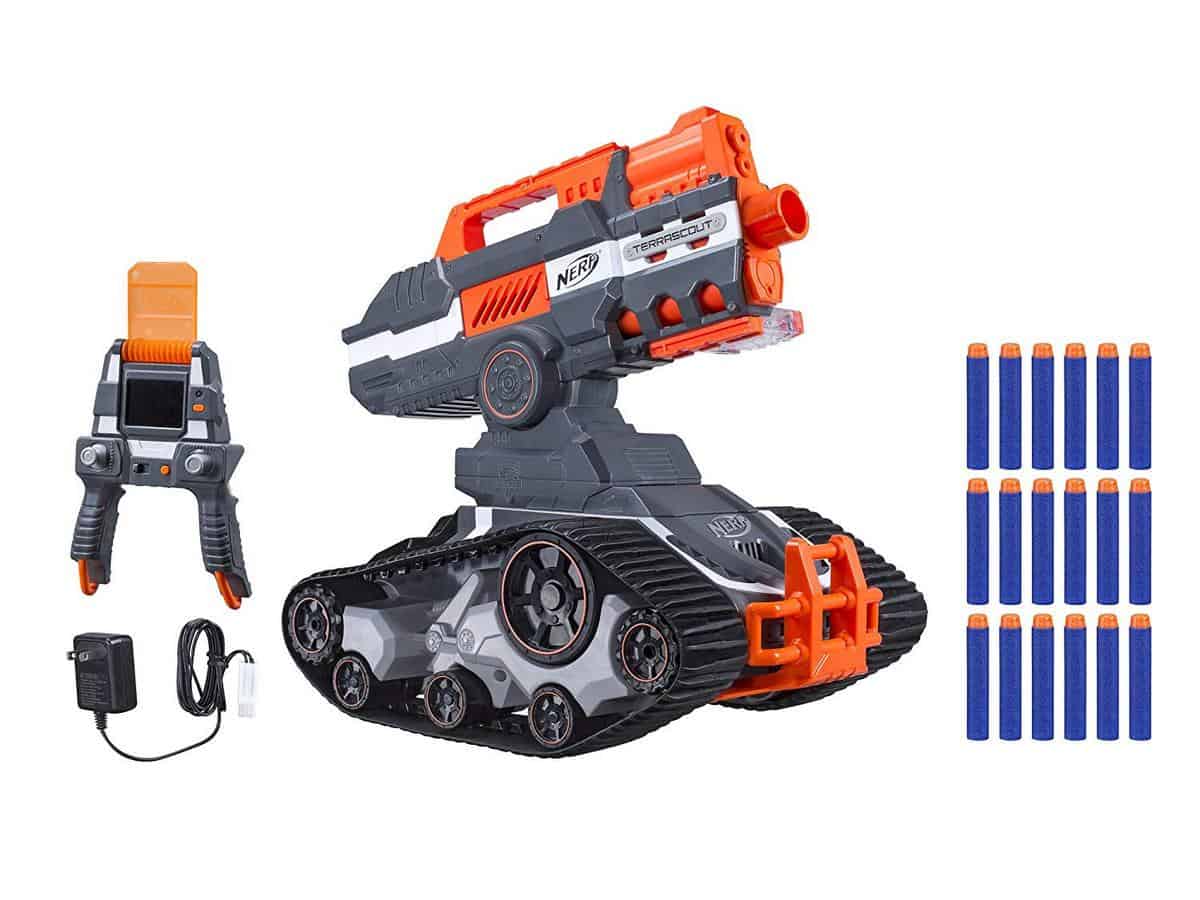 The Terrascout Recon RC Drone is much more than a simple Nerf blaster. It’s a Nerf blaster on tracks, one of the most advanced Nerf toys ever made. It’s a 35 dart drum fed, automatic fire capable and remote controlled Nerf blaster, able to handle almost any terrain no matter the household or backyard.

Originally a Toys R Us release, it became available on Amazon as well and it’s the most expensive Nerf product ever launched. Due to its limited release and technological advanced capabilities, its value increased over time to somewhere around $315 today. 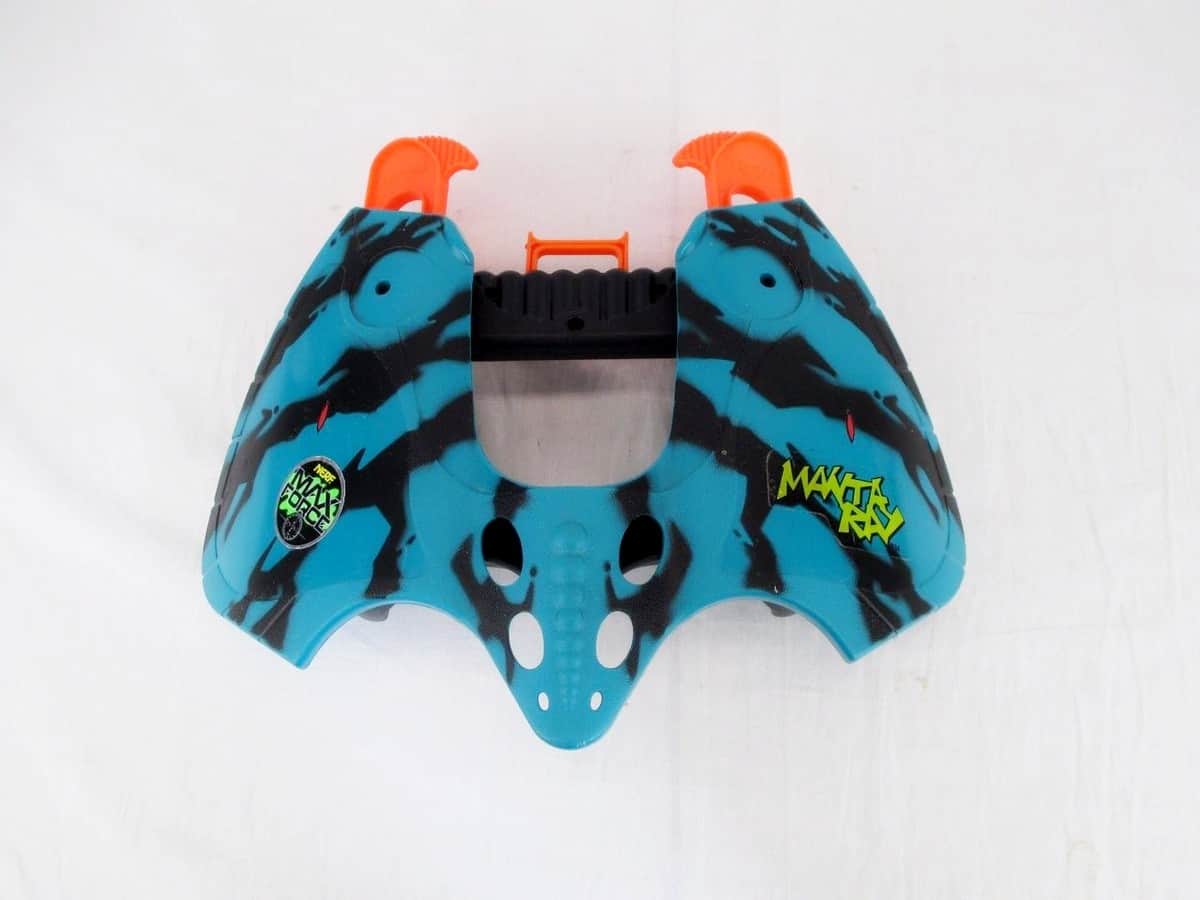 The uniqueness of this Nerf hybrid between a shield and a blaster made the Nerf Max Force Manta one of the most sought after Nerf product of all. It was made to look like a Manta Ray, with the body blocking incoming fire and multiple barrels which are able to shoot angled darts which converge on the target.

Released back in 1995, the Nerf Max Force Manta impressed fans so much that today, there are parents who share the fun with their kids. The toy has a value of around $425 nowadays. 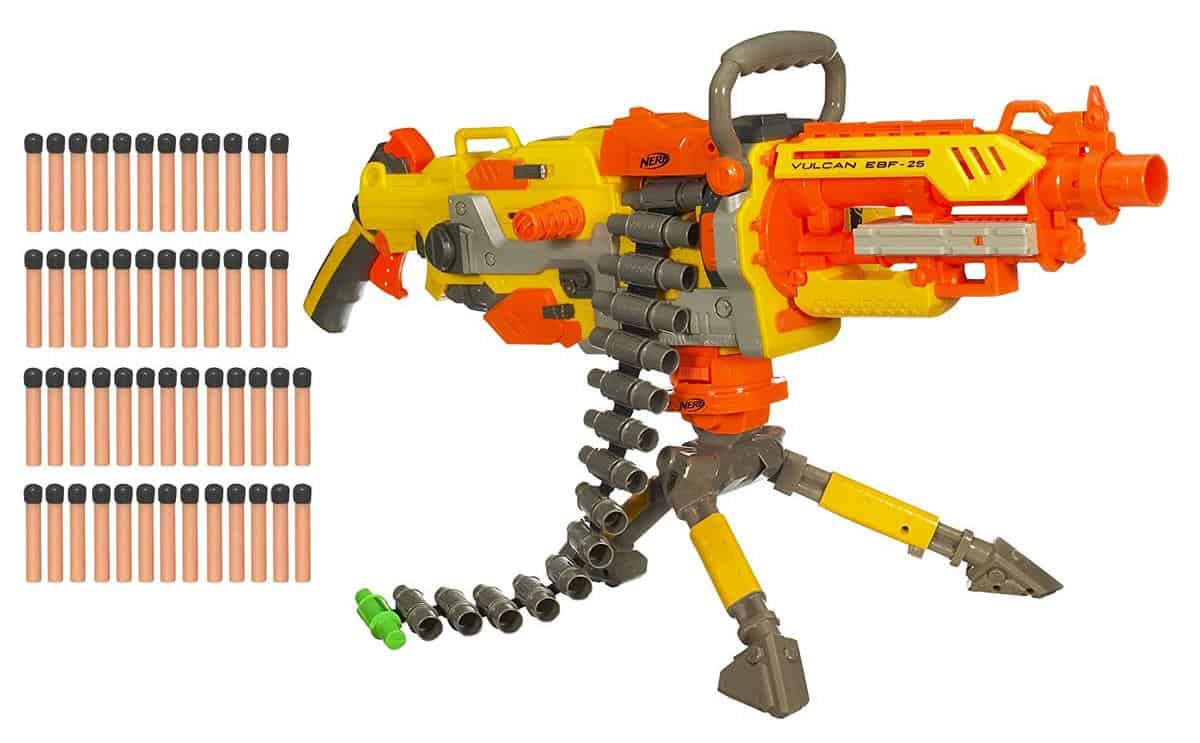 The N-Strike Vulcan EBF-25 is a big, belt-fed dart blaster that looks like a machine gun and has a fire rate of 3 Elite darts per second. Perfect for suppressing the enemy in dart battles, the Vulcan EBF-25 even features a tripod for a more improved aiming efficiency.

The belts have 25 darts each and the top handle made it easy to carry around, giving it the feeling of really operating a machine gun. The price it goes around nowadays rises to $520. 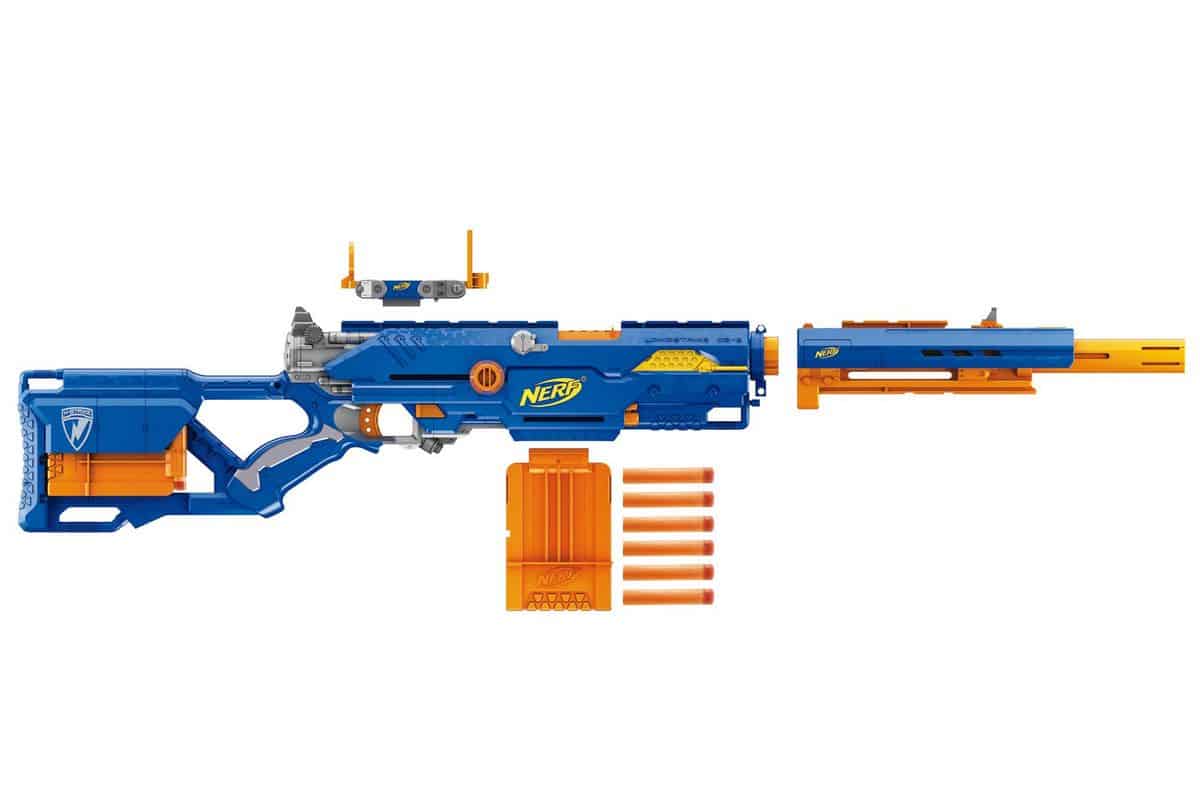 The N-Strike Longstrike CS-6 is among the rarest Nerf guns around if you’re looking for one that’s still in the box and untarnished. As the name implies, it’s a sniper rifle dart blaster, the longest one back when it was released in 2010. There was even a barrel extension for longer ranges and a flip up sight for better accuracy. It has a range of 35 feet.

Unlike other blasters, this one didn’t work out as planned, due to its ‘bolt-action’ mechanism which was hard to implement and was prone to malfunctions that upset many players. Due to that, its lifetime on the market was short, but at the same time, made it one of the most valuable from a collector’s point of view, a thing which boosted its value to a good $600 nowadays.