Swiss watchmaker MB&F is back on our radar with a new Horological Machine and we couldn’t be more excited! Inspired by mid-century designs from the automotive and aviation worlds, the Horological Machine N°9 ‘Flow’ looks like a small jet engine on your wrist, with a complex titanium case, blending polished and satin finishes, that hides an incredible manual winding movement, entirely developed in-house.

Each flank of this horological beauty allows you to take a closer look at the independent twin balance wheels, working their magic under elongated domes of sapphire crystal. The third pane of sapphire crystal, found right in the center of this machine, reveals the gearbox of its complex HM9 engine.

The dial of the Horological Machine N°9 ‘Flow’ is perpendicular to the rest of the engine, showing you the hours and minutes in the most beautiful way possible. There are also two satin-finished air scoops mounted alongside the pods with the oscillating balance wheels and the winding (and setting) crown is located at the other end of the central body, complementing the entire design.

MB&F’s newest Horological Machine is just 57 mm wide at its widest point and it’s fitted with a compact, yet very robust engine. The entire mechanism is all in-house built and features two balance wheels that feed two sets of chronometric data to a central differential to get the average reading.

These independent balances beat at a leisurely 2.5Hz (18,000bph) each and if you take a closer look at the engine you might notice a small resemblance with the MB&F Legacy Machine collection thanks to the polished steel arms that hold the balances and contrast beautifully with the movement bridges.

The Horological Machine N°9 will come with two versions of its HM9 engine, one with a matte rose gold coating and the other with a dark NAC coating. MB&F will release two titanium versions of this timekeeping wonder, a road edition, boasting the red gold-plated movement and a speedometer-type dial, or an air edition, with the darkened NAC movement and an aviation-style dial.

Both versions will be available in limited series of just 33 units. 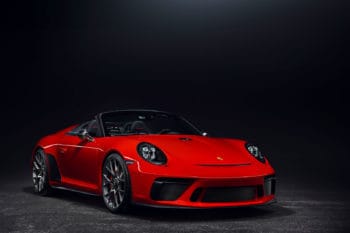