20 Largest Explorer Yachts in the World

Humans have always been curious to find out what’s behind that mountain range, how’s the view from the top, what new and exciting places lie beyond that next forest, that next road, that open sea. Beyond the horizon.

We’ve always been discoverers longing to go onto our next adventure. And since our planet is mostly explored on land and space is a little bit too far away, the only thing with plenty of mysteries left to uncover is the ocean.

And to explore oceans, nothing is more suited than an explorer yacht.

Fully equipped to take on adventures to some of the most remote places on Earth, and large enough to house an impressive range of toys and plenty of storage space for all that’s needed for a few weeks away at sea, these yachts will tickle that desire to leave everything behind and go chasing that blue horizon.

For those for whom cruises are a waste of time, these 20 largest explorer yachts in the world will make a lot more sense: 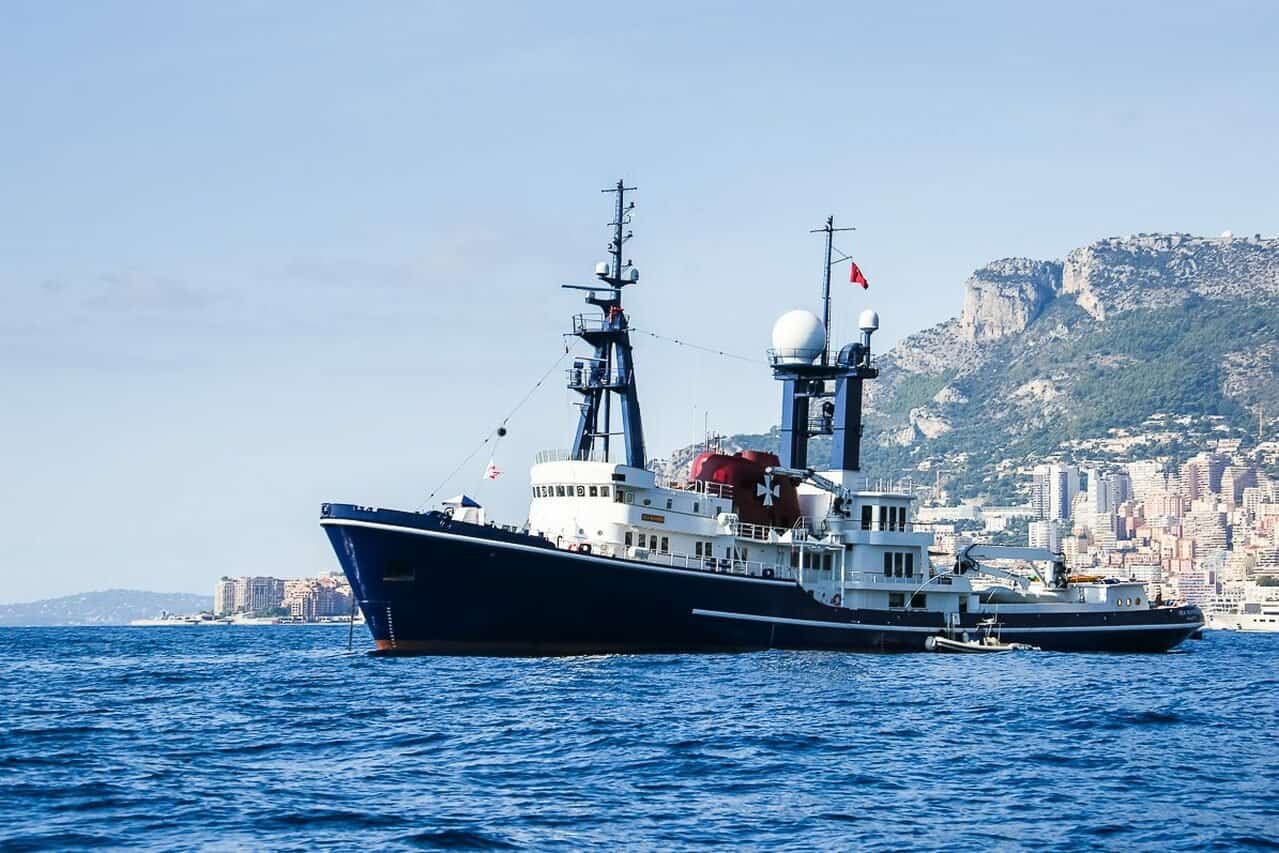 The 255 feet Sea Ranger was built in 1973 in Germany as an ice class tug and converted in 1994 by Malta Drydock Company into a luxury yacht for Jackie Setton, a French entrepreneur.

It received its current name in 2013 when it was auctioned and changed ownership. The vessel has an unbelievable range of 31,000 nautical miles, and has already seen most of the world, including both the Arctic and the Antarctic. 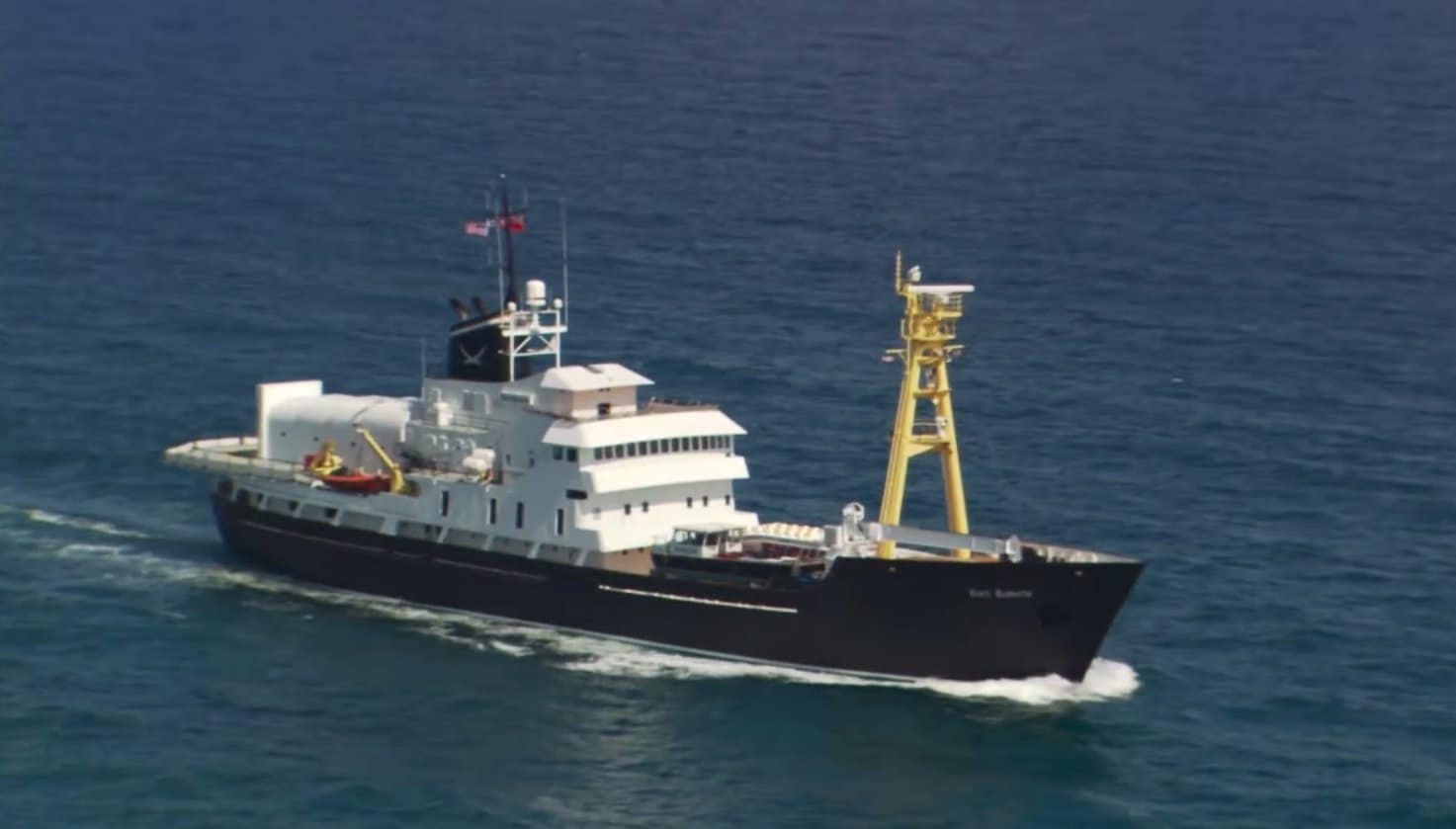 An ice class vessel built in 1963 by Canadian Vickers for the Canadian Coastguard, Bart Roberts was formerly called Narwhal. It got its new name – one belonging to a notorious pirate – back in 2002, when it was sold to a Florida businessman Arnie Gemino, who converted the ship into a charter yacht through his company, Tradepower International.

The refitted ship now comes with a new and luxurious interior with a pirate theme, plus all sorts of water toys, but it has a new owner, who keeps it for private use. 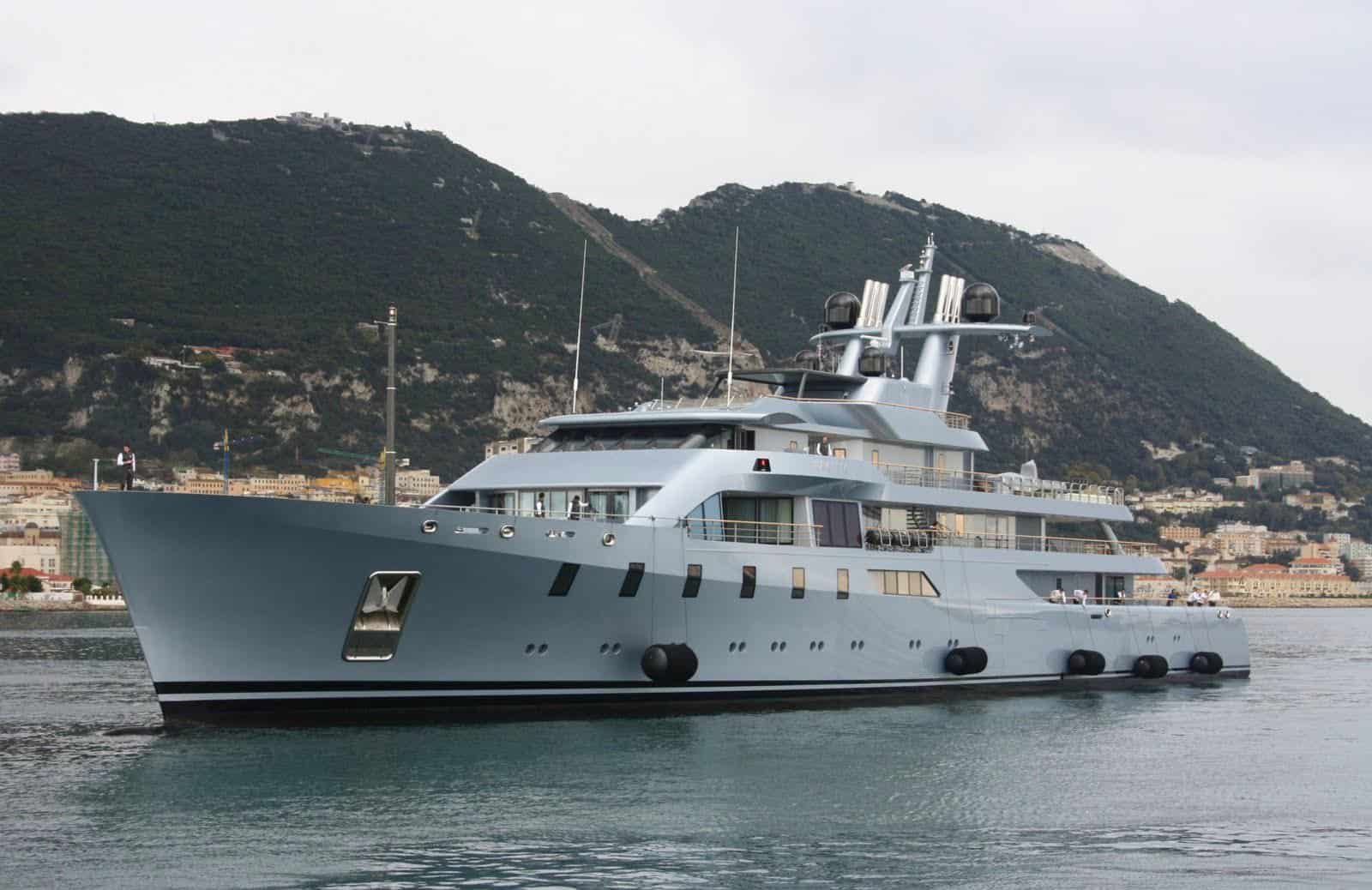 Launched in 2010 by Lürssen, the Pacific, formerly named Project Josi, is an 85.2 meter explorer yacht with an intriguing exterior designed by German Frers, an iconic Argentinian naval architect well known for projecting some of the largest sailing yachts in the world. The interior was made by Bannenberg & Rowell Design.

The yacht is large enough for carrying two helicopters, and apparently it has been already spotted navigating all over the world. 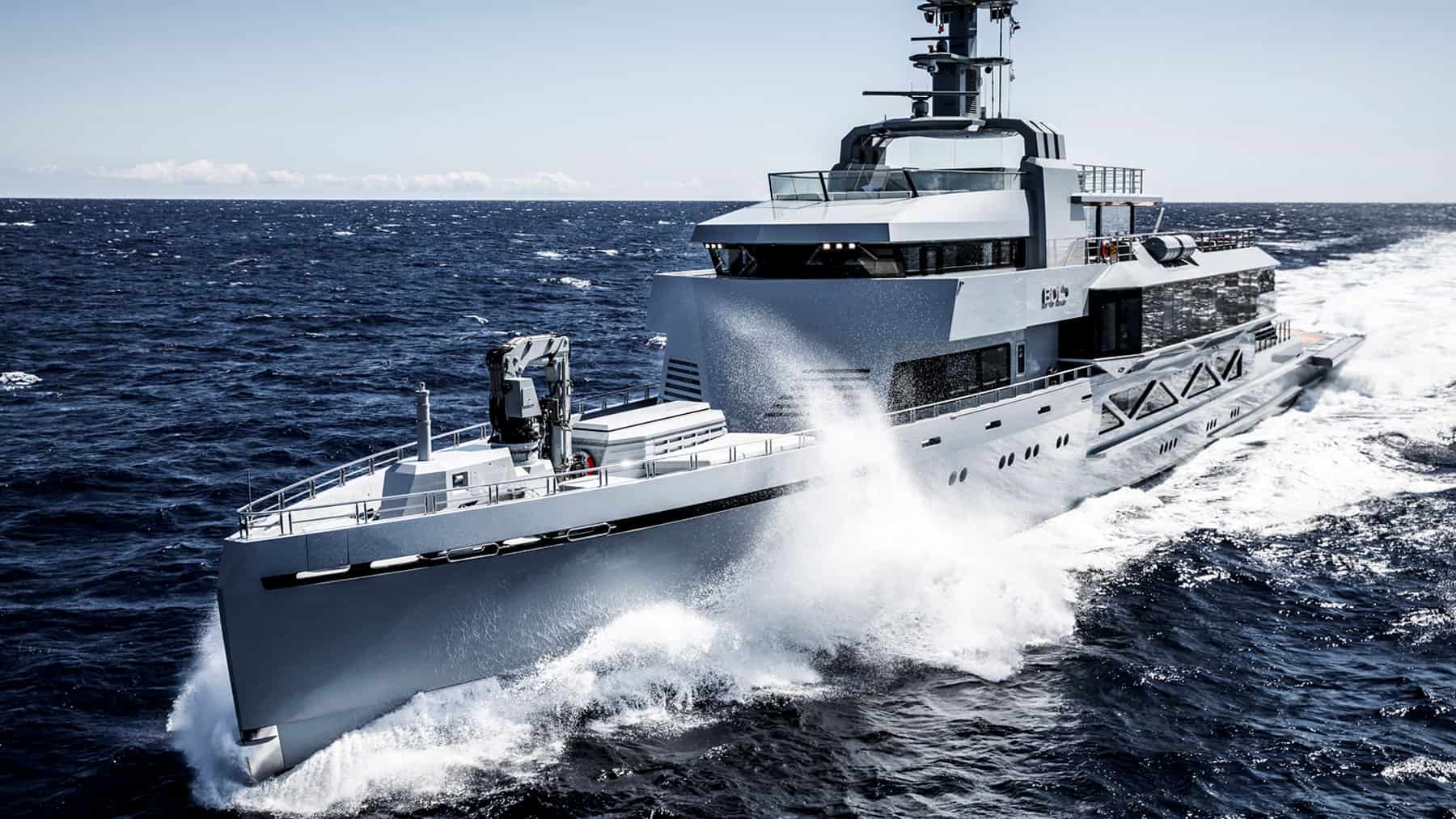 A 2019 creation of Silver Yachts, Bold was a collaboration between exterior designer Espen Øino and interior designer firm Vain Interiors. The result is a 279 feet, or 85.3 meter long explorer yacht with no less than 300 square meter of usable surface inside, plus an impressive and luxurious interior that resembles more a New York loft than a yacht.

Bold can accommodate up to 16 guests in its eight staterooms situated on the main deck. In total it can carry up to 96 passengers while cruising. It also features two helipads, two Rupert Marine tenders, and comes with a total range of 5,500 nautical miles before needing to resupply. 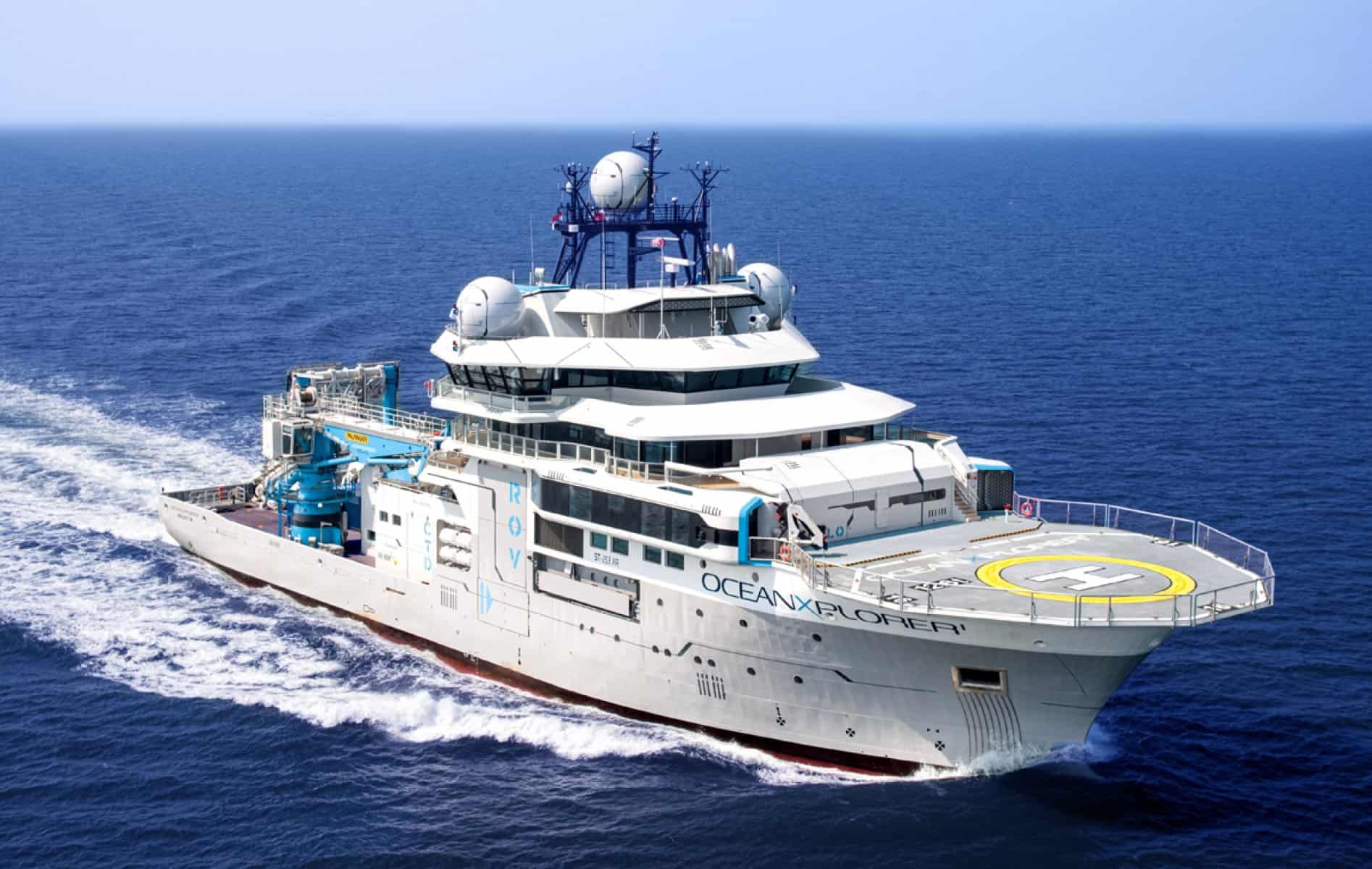 OceanXplorer 1 is one of, if not the most advanced research vessel in the world right now. The 285 feet, or 87 meter, ship was built in 2010 by Freire Shipyard and equipped to both be able to explore the underwater world and also transmit its findings through various digital outlets, including social media and a TV show.

The research part of the vessel will benefit from two custom made Triton manned submarines able to dive down to 1,000 meters, plus an ROV and an Autonomous Underwater Vehicle (AUV) that has the capability to dive as deep as 6,000 meters below sea level. 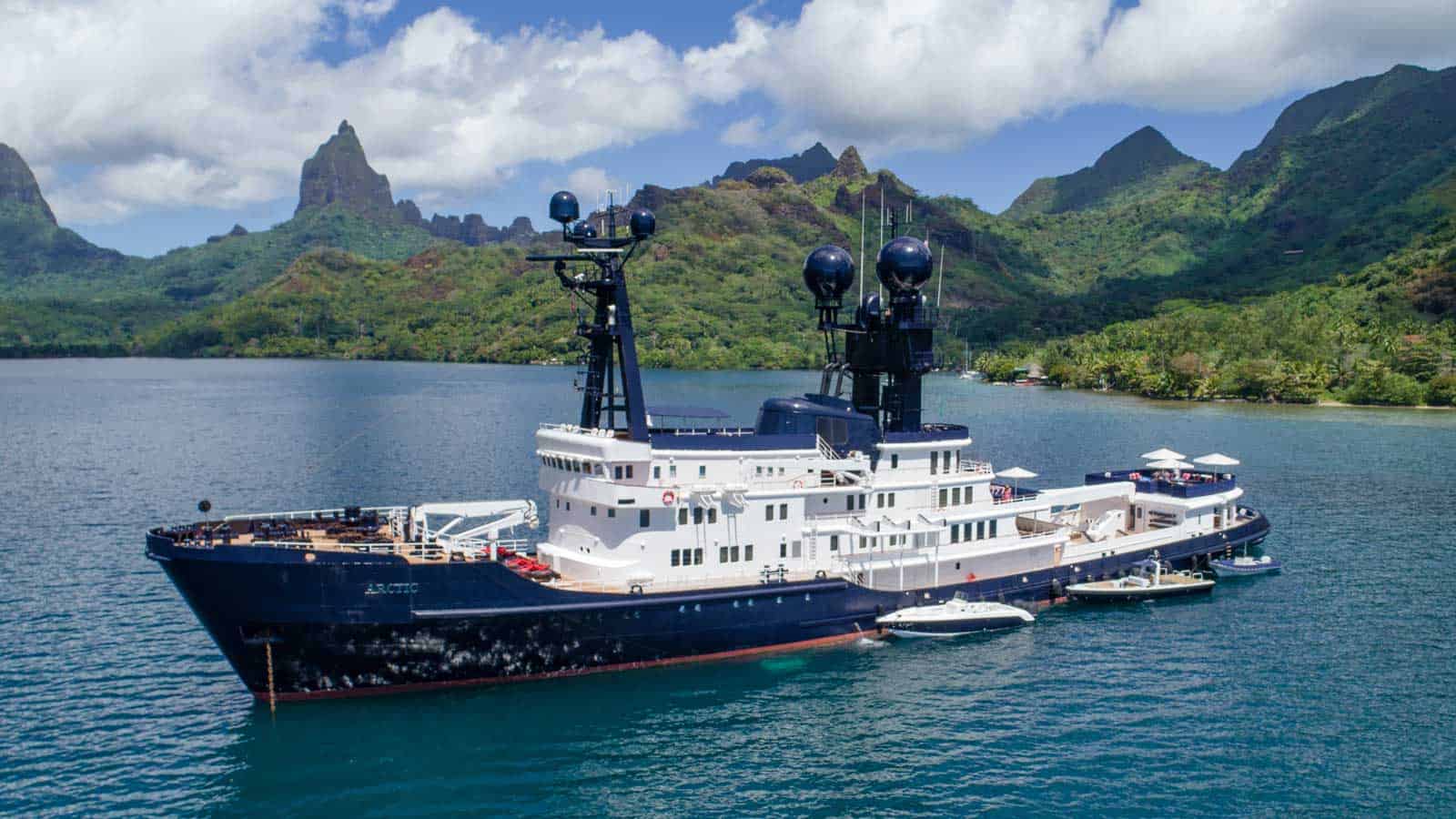 Built by Schichau Unterweser in 1969, the 87.6 meter Arctic P is a deep sea ice-breaking salvage tug that fulfilled its purpose until 1993, when she was sold to a company called Magenta Investment. From then on, it was taken to Malta Shipyards and converted into a superyacht, now called Arctic Research.

The exterior was designed by Kusch Yachts, and Schichau Unterweser, the original builder, remade the naval architecture. The interior was refitted between 2019 and 2020, now able to accommodate 12 guests in seven staterooms, one of which is an astonishing 90 square meter master suite. 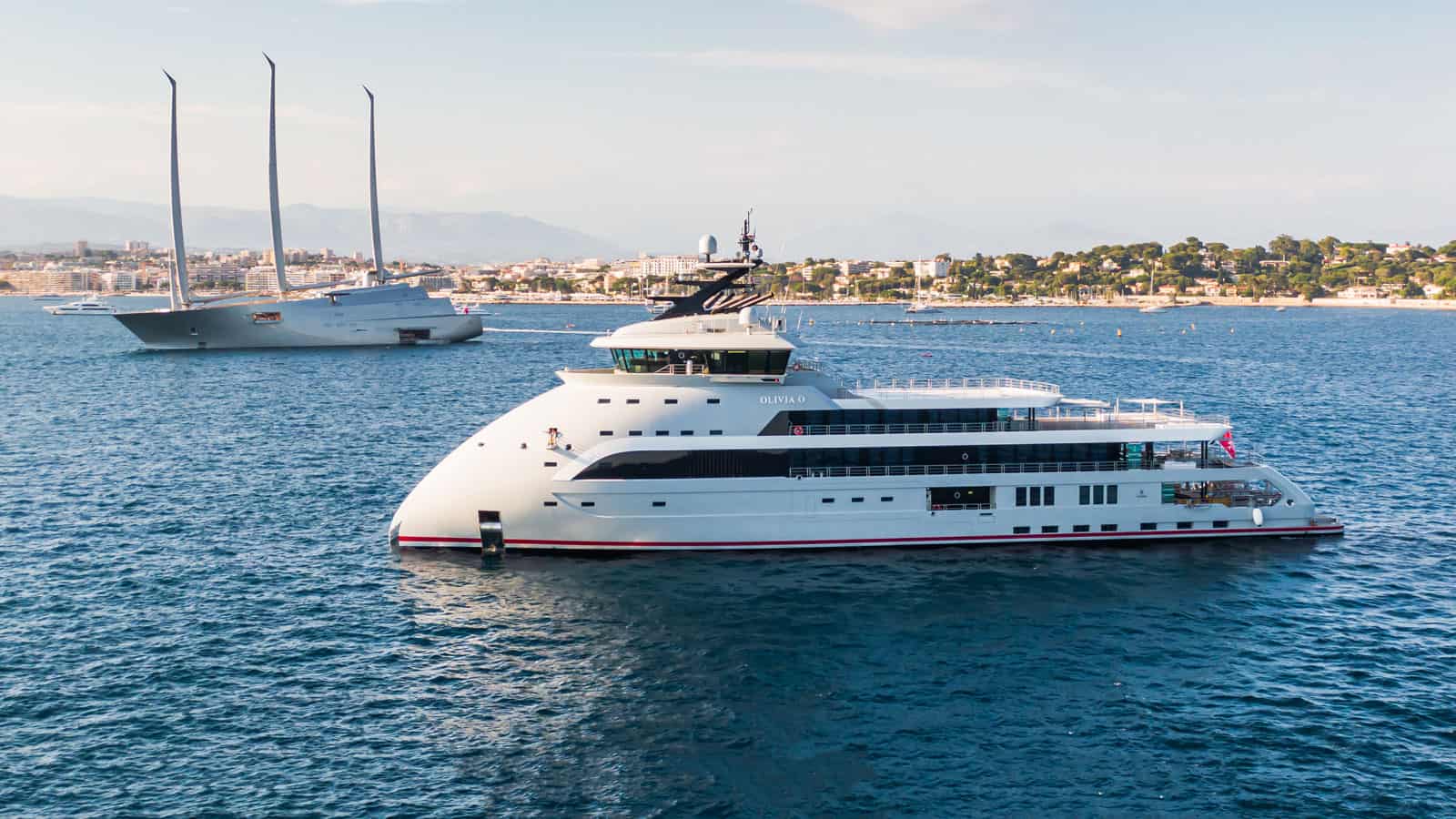 The grandiose 290’3″ feet (88.5m) Olivia O was put to sea in 2020 and she already started a cruise in the Mediterranean. The ship was built by the Norwegian yard Ulstein Verft, and uses an X-Bow hull shape that gives it the ability to withstand any kind of weather conditions.

Espen Øino was the exterior designer, and he included a helipad, a 10 meter pool, and a full beam tender garage among the vessel’s most important features. 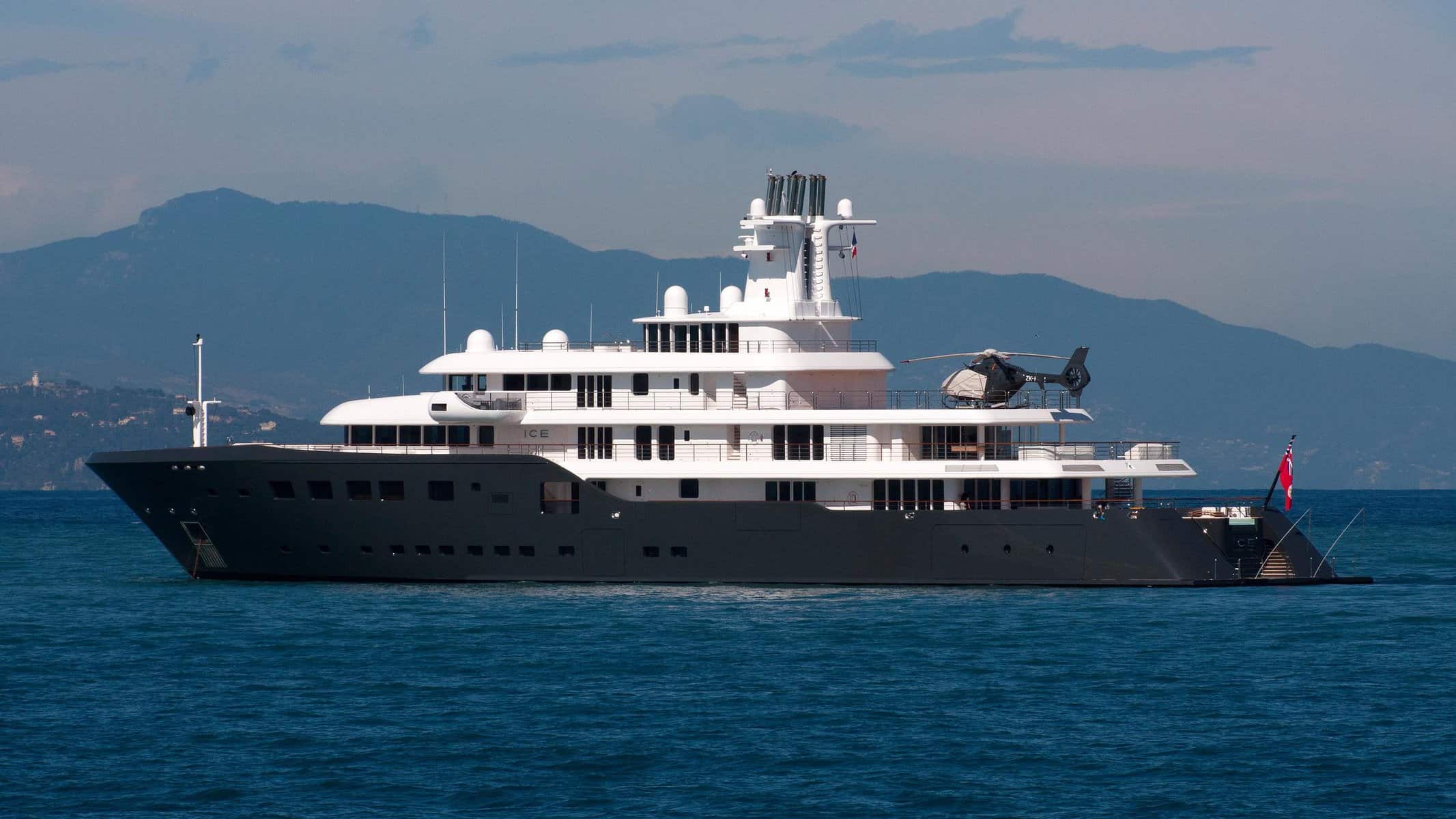 Belonging to Suleiman Kerimov, Ice is one of the most iconic and impressive yachts that roams the planet’s oceans. Amazingly stylish and with an imposing construction, the 90.1 meter explorer yacht was built in 2005 by German yard Lürssen.

The performance of this yacht is no less than impressive, since it’s incredibly quiet and vibration free, a feat achieved through the use of two Azipod units powered by eight Deutz engines. Top speed is 18.6 knots and range reaches 6,000 nautical miles.

Among the features, it counts various water toys and sailing dinghies, plus a helicopter landing pad made specifically for the Eurocopter EC 135 helicopter. 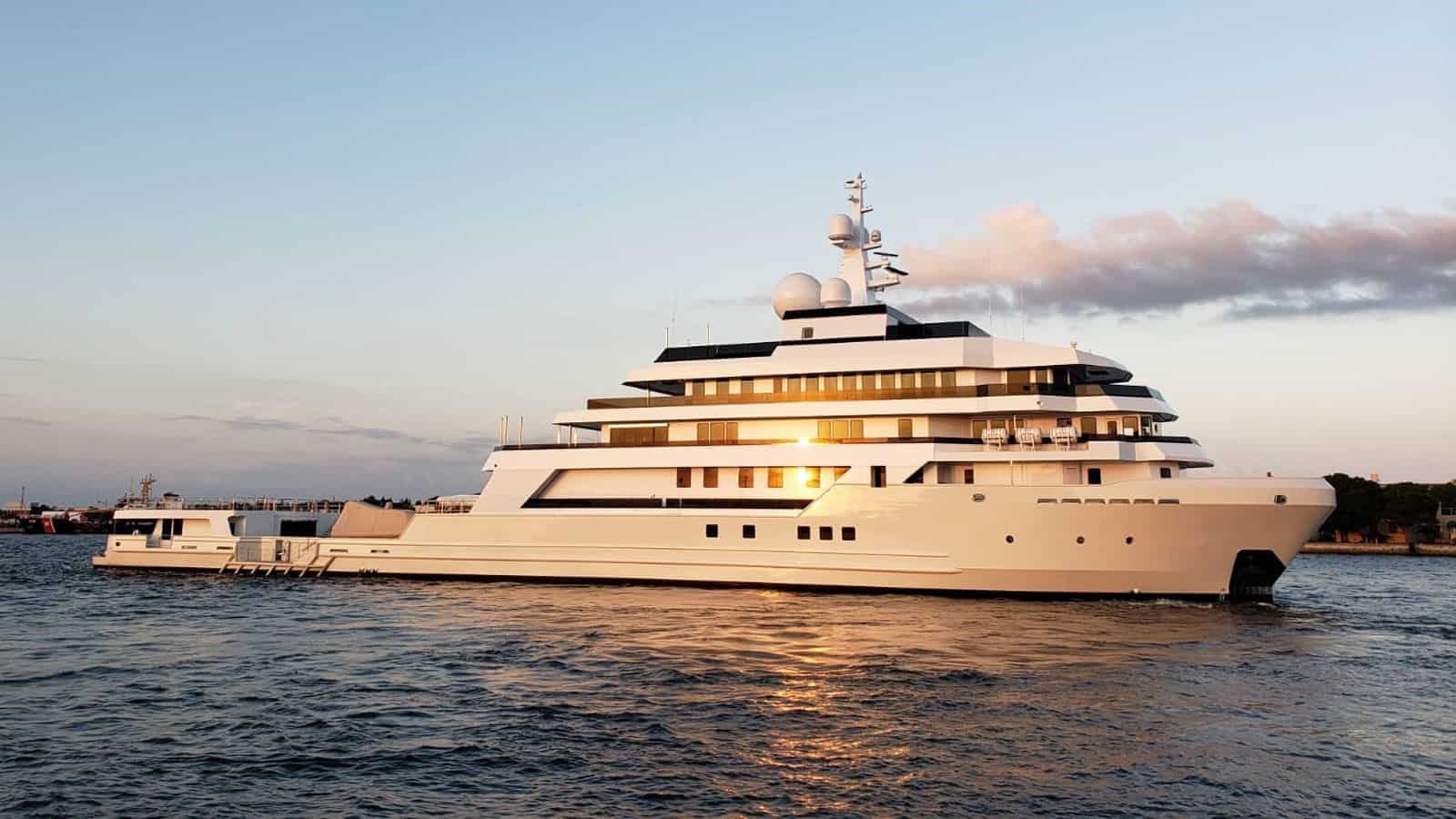 The 91.4 meter long Voyager was built back in 1997 by the Swiftships yard in the United States, and by 2020 it had already travelled over 27,000 nautical miles, exploring some of the most far-flung places on Earth, including Antarctica, South Africa, and Madagascar.

But Voyager wasn’t always an explorer yacht. It was converted into one in 2019, and was a supply ship before starting the three year conversion. It was initially named Candy Trader and had a length of only 63 meters, was renamed in 2003 as HOS Trader, and now is the beauty called Voyager, with five luxurious decks and a crew of 70. 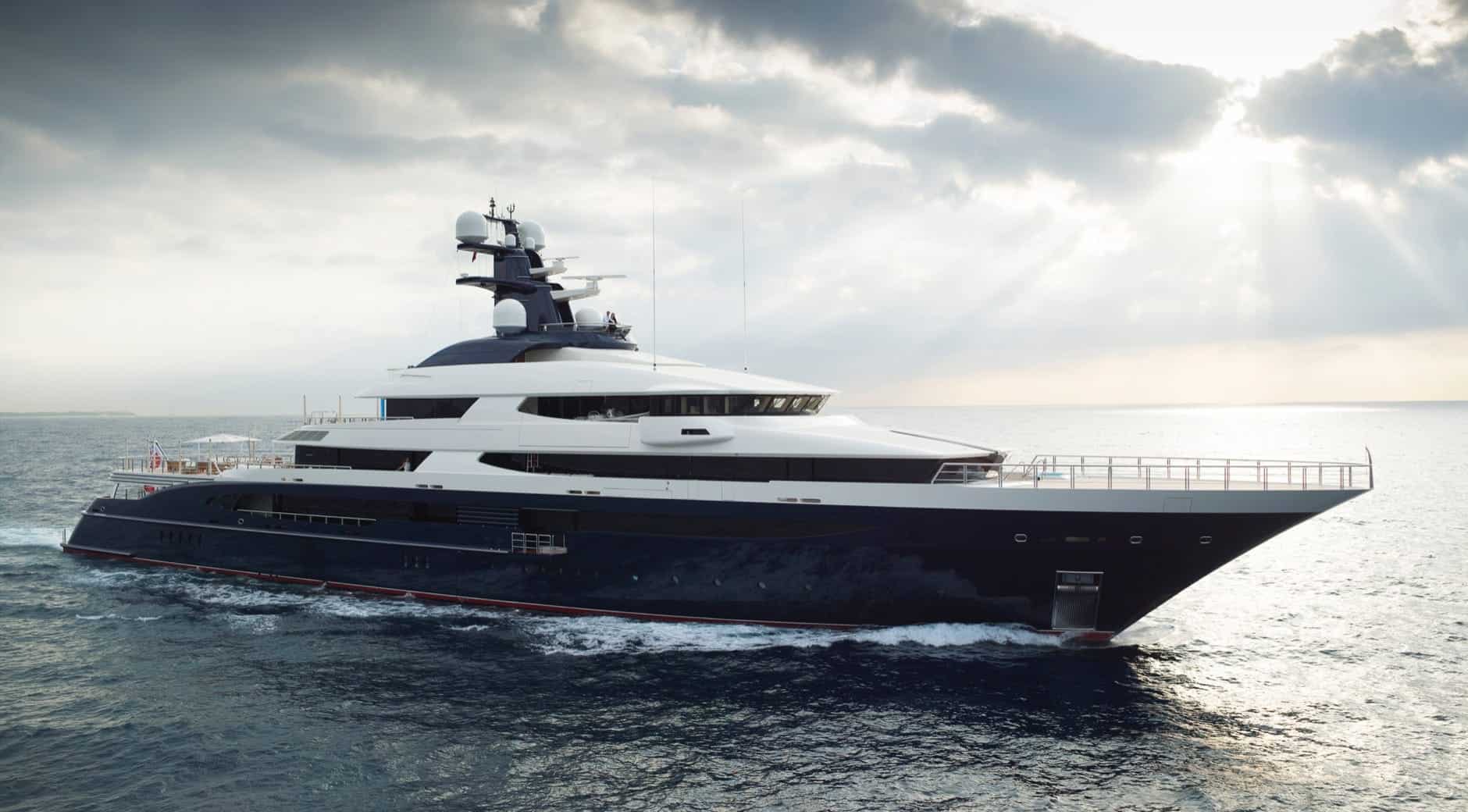 Originally called Equanimity, the 91.5 meter explorer yacht was the first ever to be built to PYC standard. It was launched in 2014 by the Dutch yard Oceanco.

On board, it features five decks with premium accommodation, spa and wellness area, swimming pool, tender garage with two 10.5 meter Hodgson tenders, and also a foredeck helicopter landing pad. Among the water toys, there’s Jet skis, Wave Runners, SeaBobs and an electric surfboard. How’s that for a fun yacht? 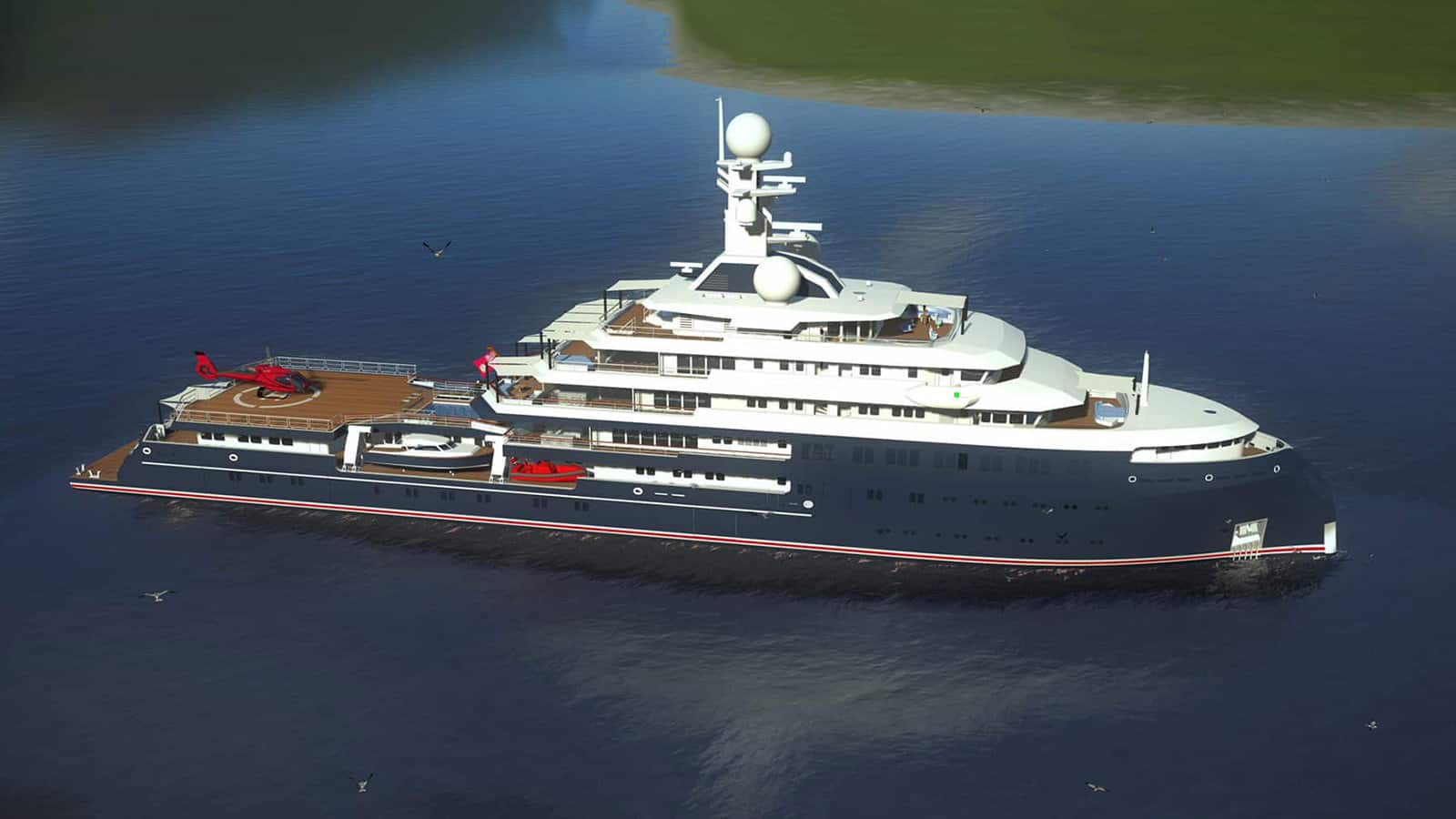 The 107 meter, or 351 feet, Icecap explorer superyacht will be launched next year, in 2023. Designed by Norwegians at Salt Ship Design and built to ice class spec, the vessel will be well fit to do some off the beaten path exploring, able to reach some of the most remote corners of our world.

Among the features, there’s a sunken helicopter hangar, and a helipad. So far, not much is known, and she was first seen earlier this year when she was uncovered. 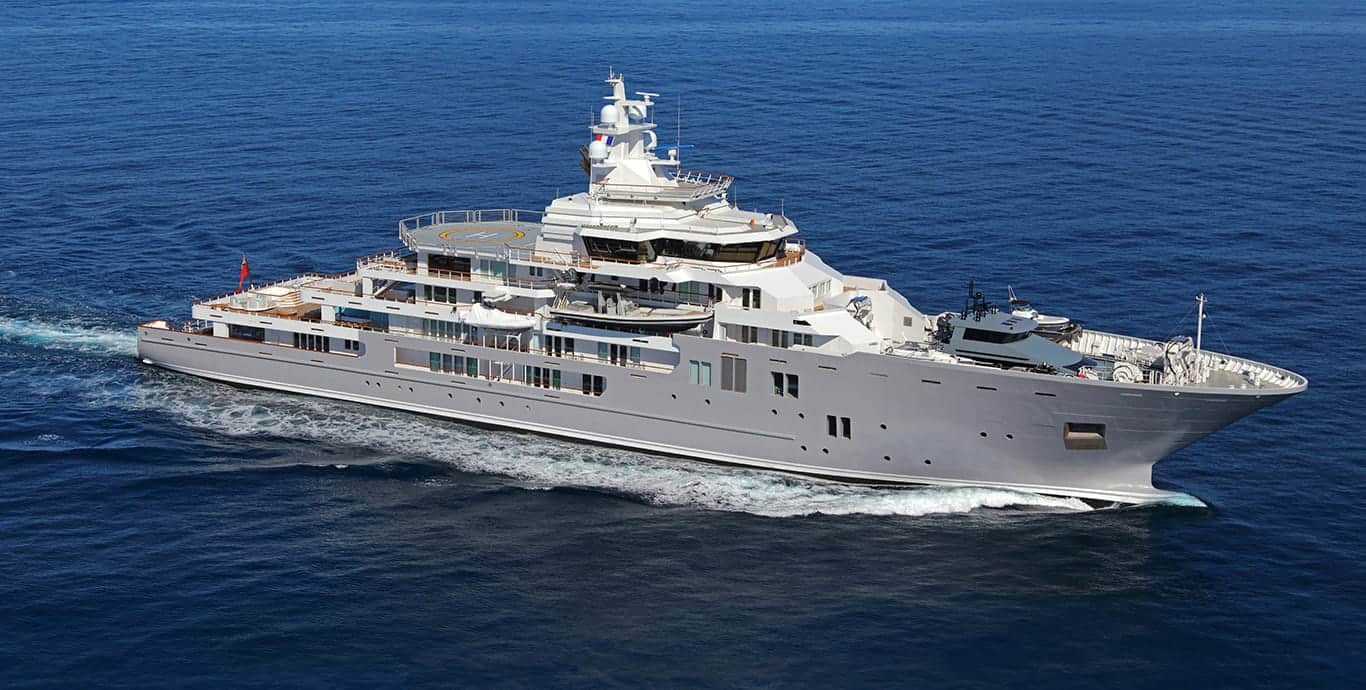 Formerly known as Ulysses, the 107 meter Andromeda was built in 2016 in Norway, by Kleven Verft, for Graeme Hart, New Zealand’s richest man. The new owner of the ship is apparently Mark Zuckerberg, the founder of Facebook.

Andromeda is built to withstand all weather conditions, and comes equipped with all sorts of toys for exploring distant lands. Among them, there’s six motorcycles, two ATVs, a Sealegs amphibious RIB, a twin hull support boat capable of a max speed of 50 knots, helicopter, and a full-on landing craft. 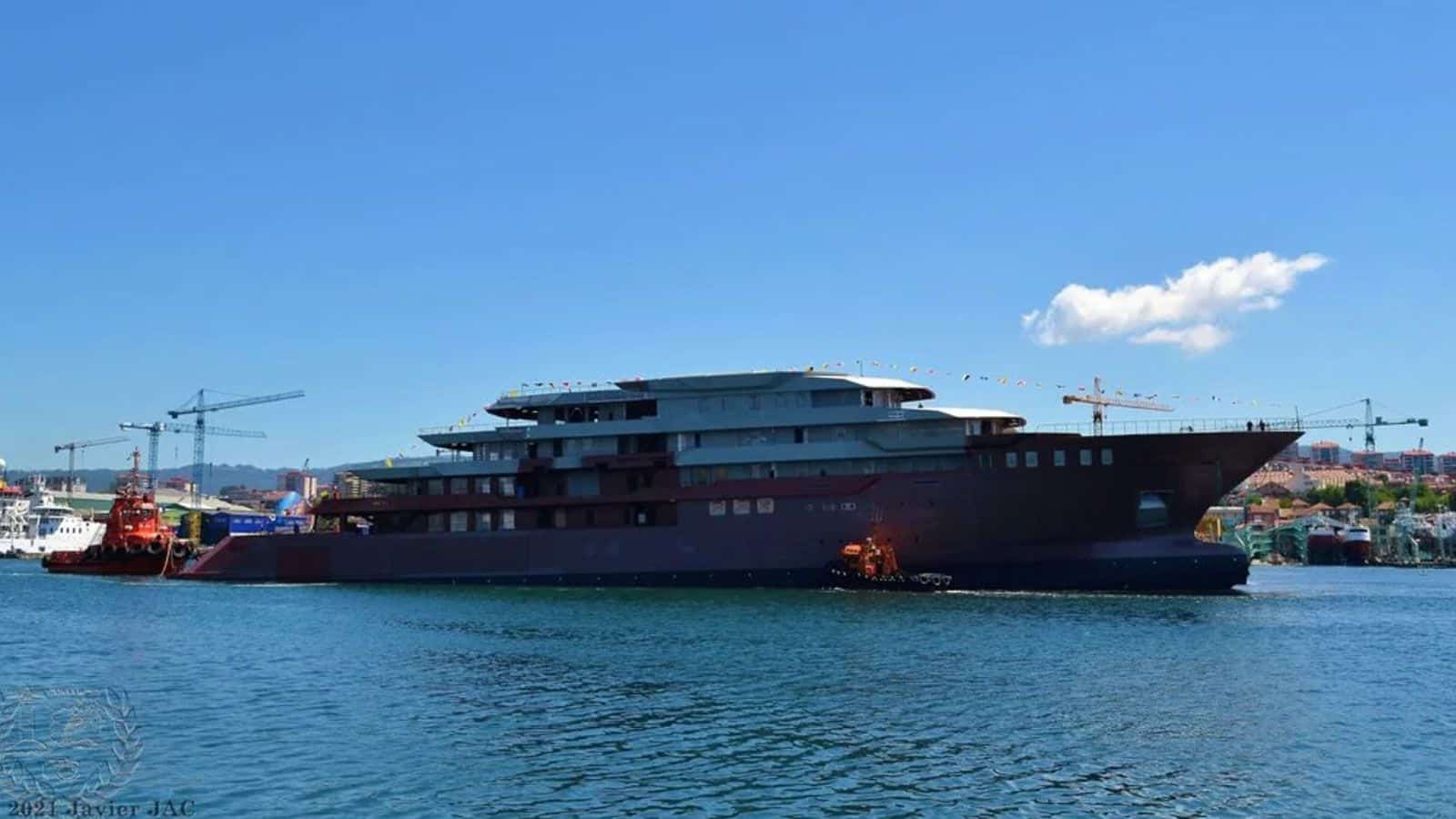 The Freire 112m Explorer, built by Spain’s Freire Shipyard, is an explorer superyacht that boasts amazing interiors, and a tough looking exterior. The ship’s exterior was designed by Marin Teknikk and British studio Bannenberg & Rowell Design.

The interior of the yacht was designed by the British studio alone. The vessel was launched in the summer of 2021, and spent the time getting ready for its delivery in 2022. 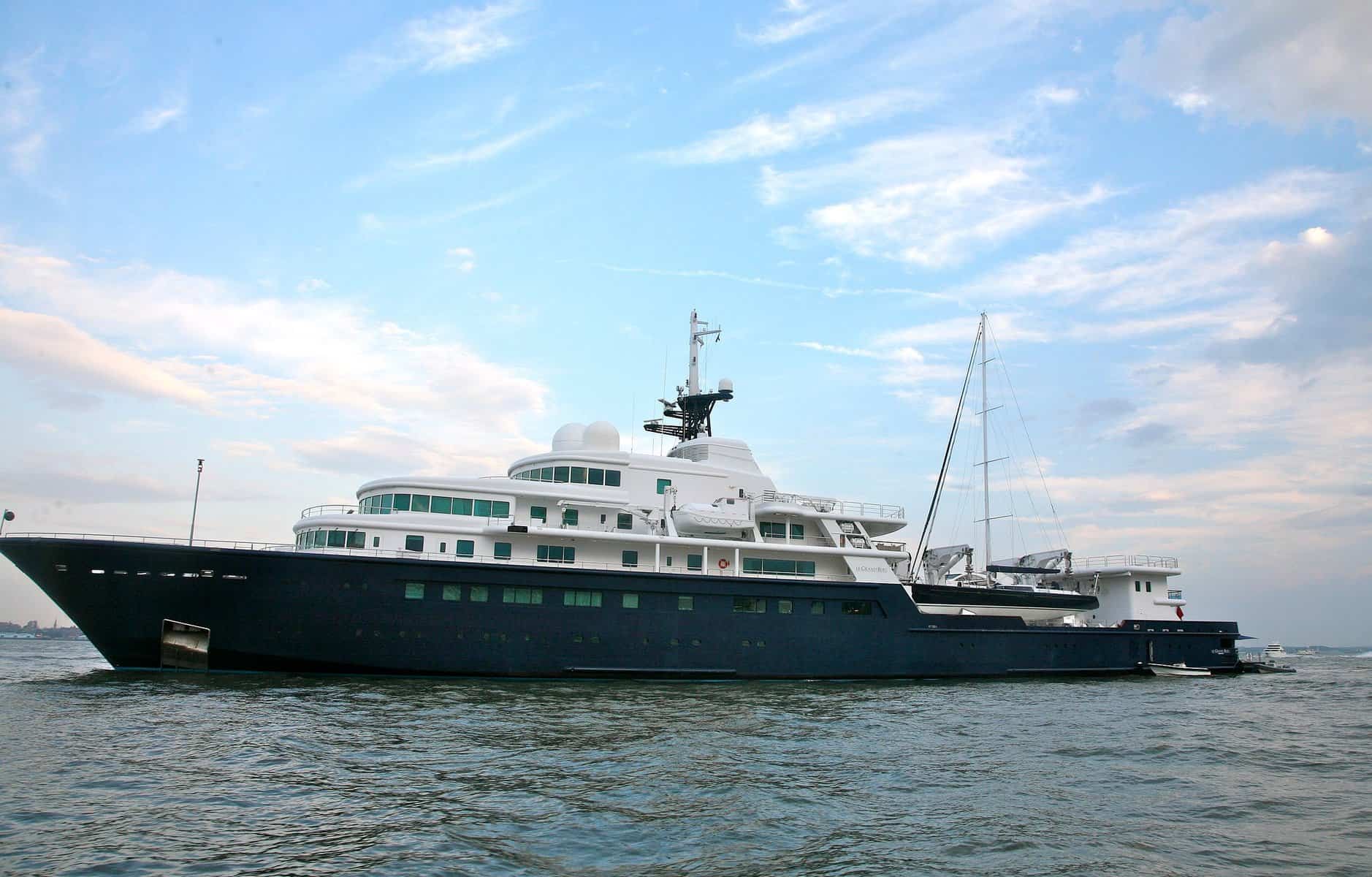 Le Grand Bleu was launched in 2000, after being built by the German shipyard Bremer Vulkan. Powered by two Deutz engines, it’s capable of reaching a top speed of 17 knots.

It was initially owned by John McCaw, a US telecommunications tycoon, and was then sold to Russian billionaire Roman Abramovich, who had it refitted to his own desires. The ship changed ownership again, and is now reportedly owned by Eugene Shvidler, a friend and business associate of Abramovich.

Delivered in 2010 by German yard Lloyd Werft, the 115 meter ice class yacht Luna was built for the Russian businessman Roman Abramovich. The vessel boasted the largest swimming pool ever installed on a yacht at launch. 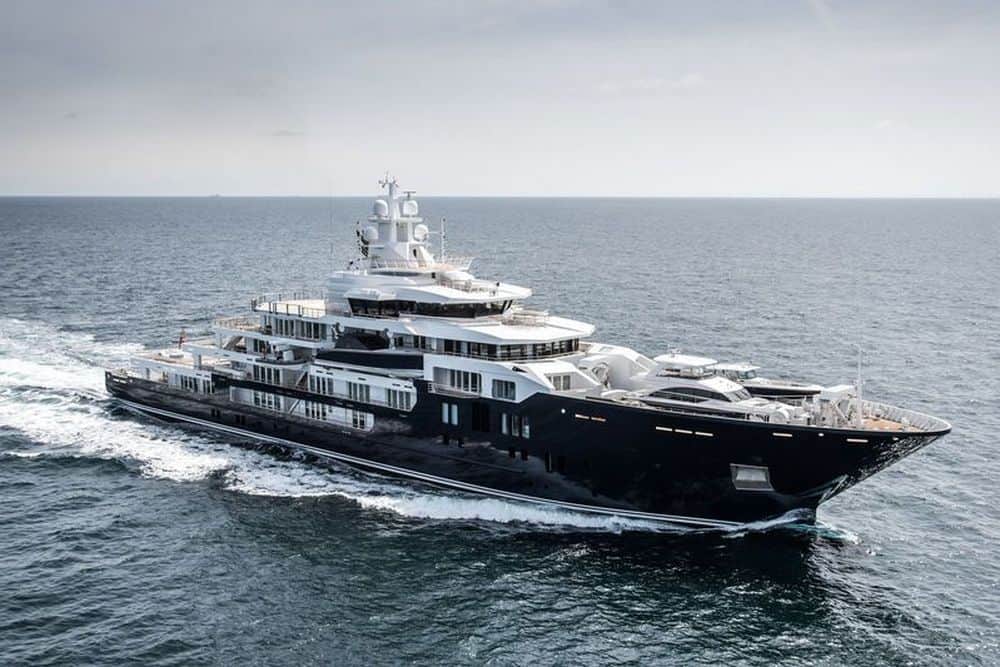 Following its predecessor, the 107 meter Andromeda (formerly called Ulysses), the current Ulysses was launched in 2018, and measures 116.1 meters, 10 meters longer than its precursor.

It was built by Norwegian yard Kleven for the same owner who commissioned the first Ulysses, and brings on board a Bell 429 helicopter, and several high speed tenders. Its 18 meter beam can house up to 66 guests. 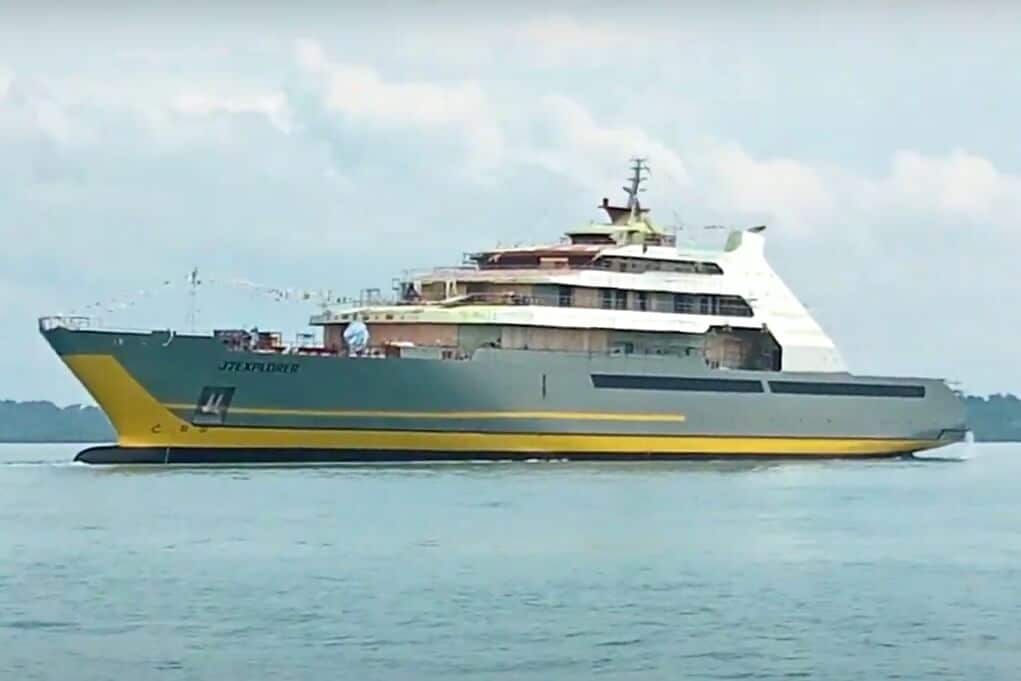 The J7 Explorer was launched this year in Indonesia, by the PT Bahtera Bahari Shipyard. The 120 meter (393’7″) ship boasts a military style exterior, with a large, open aft deck that characterizes most explorer superyachts today.

There’s little else known about the vessel, so the owner or the purpose are both unknown. What is clear is that it’s the first ever superyacht built by the shipyard, which so far only built tankers, diving vessels, tug boats, commercial vessels, and landing crafts. 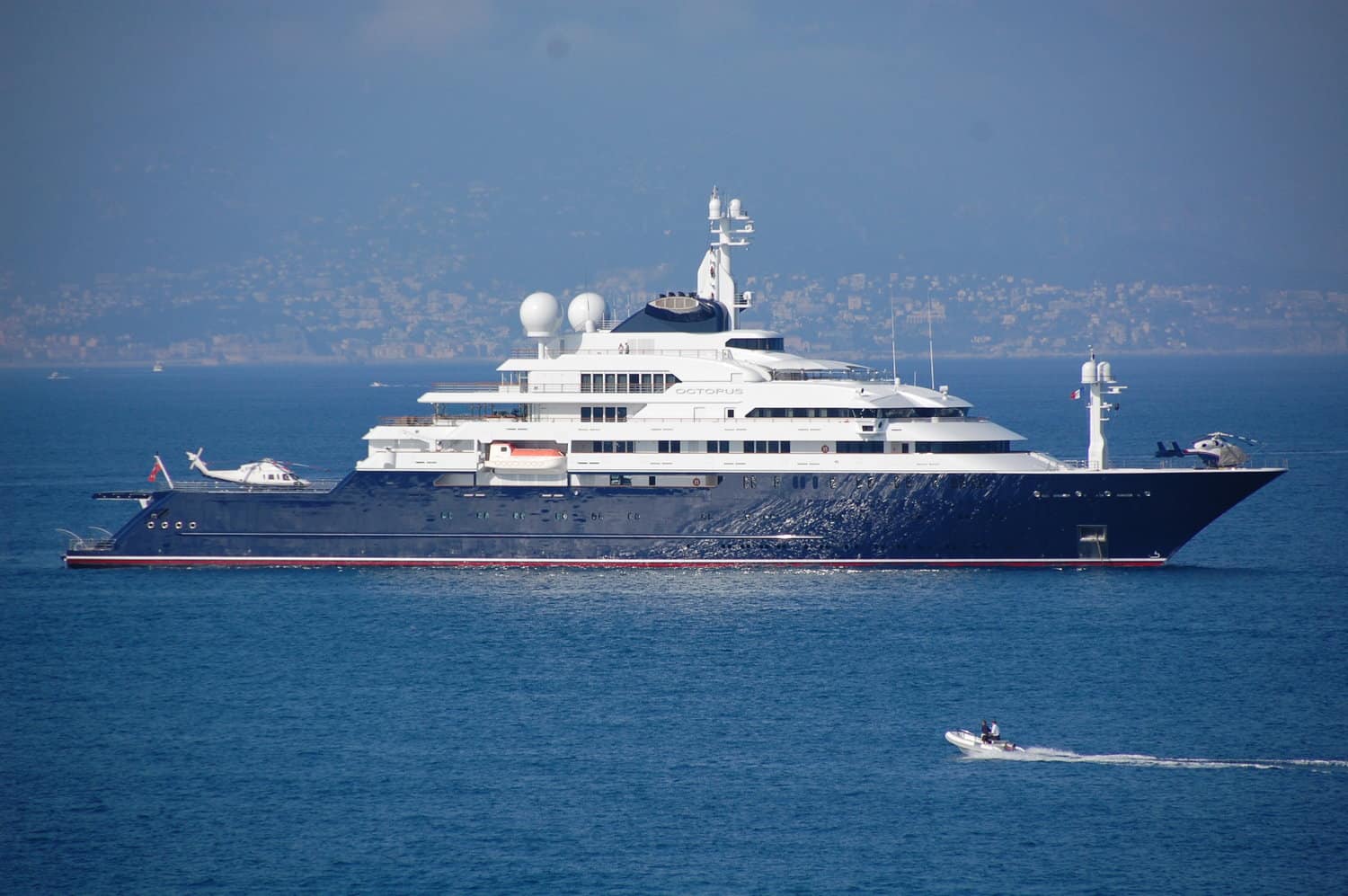 The 414 feet Octopus was built in 2003 by Lürssen in Germany for one of Microsoft’s founders, Paul Allen. The vessel is already famous worldwide, sitting among the top 3 largest explore yachts, with a capacity for two helicopters, and plenty of water toys, including a 20 meter submarine and a similar size tender.

One of the missions Octopus was involved in was an eight year search for a sunken ship, the Japanese ship Musashi, which was sunk during the Second World War. The wreck was discovered in 2015 by Paul Allen and Octopus’s crew. 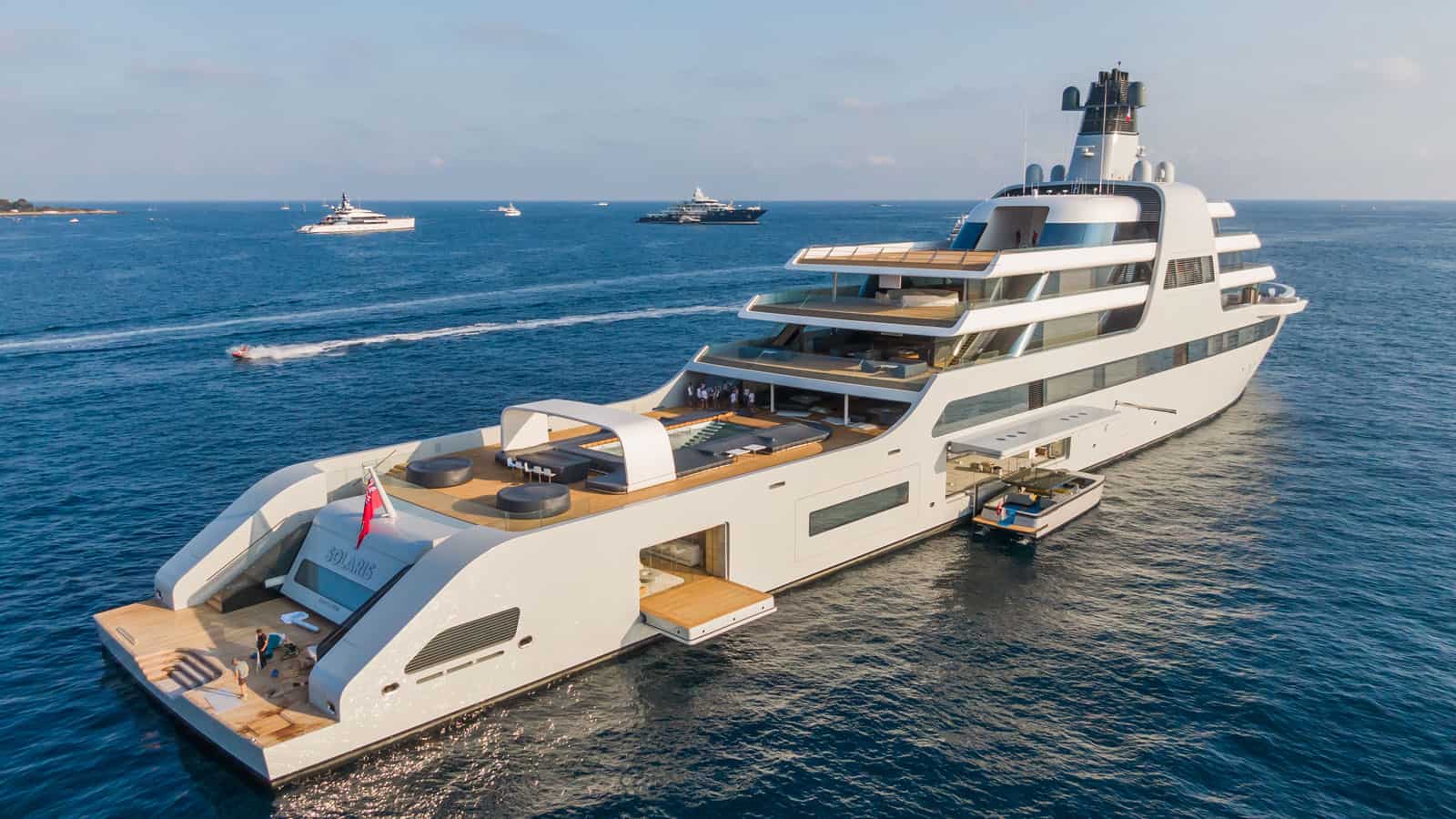 Launched in 2021, the 139 meter Solaris made world fame for its incredible length. The vessel was built by the same German yard Lloyd Werft who built the 115 meter Luna.

Solaris boasts no less than eight decks, with an interior designed by Australian Marc Newson. When it comes to features, not much is known, but existing pictures show at least a large helicopter landing pad, sun deck and a huge beach club aft.

The Solaris is currently the largest explorer yacht in the world. 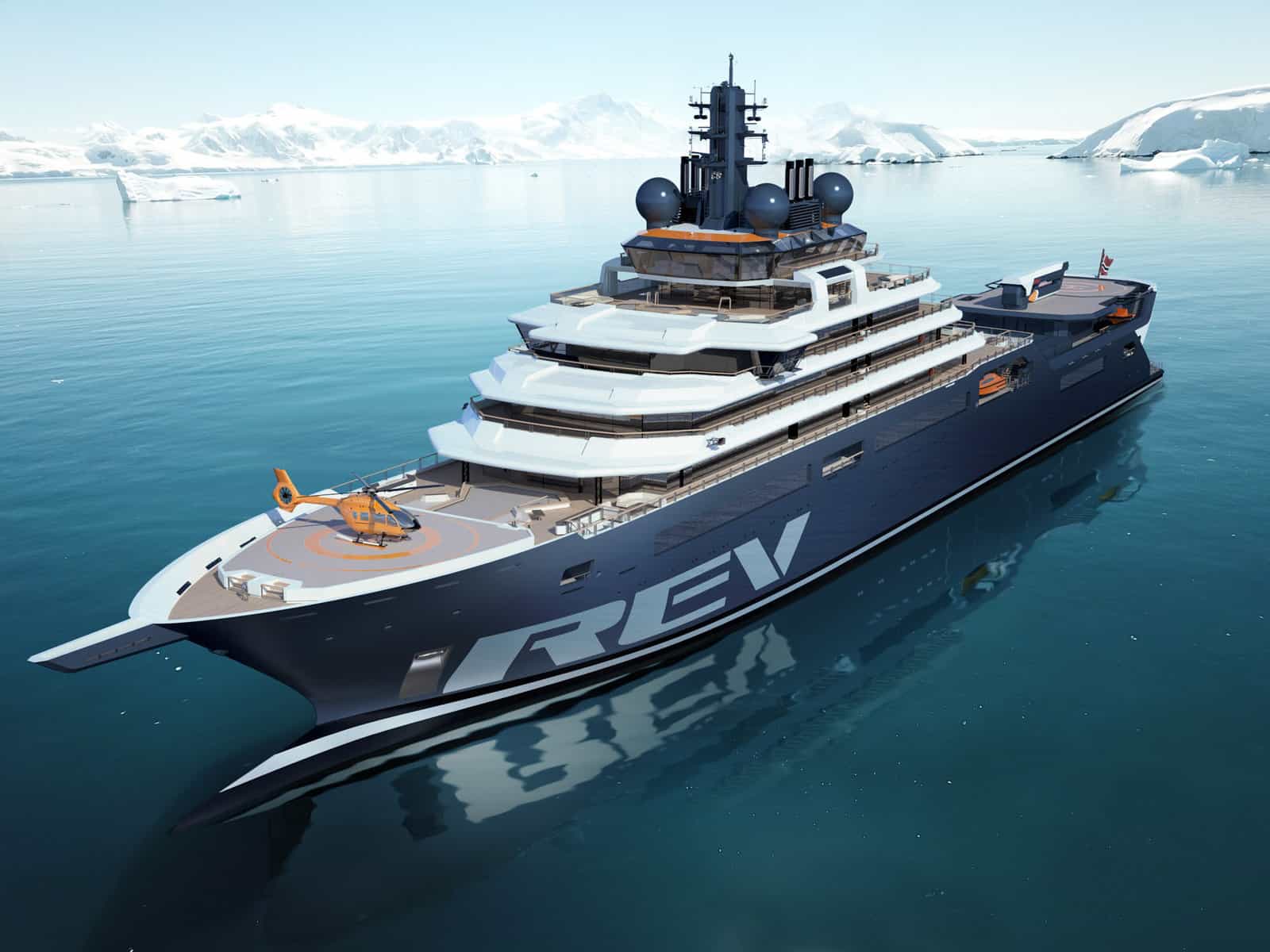 The REV Ocean is a project by VARD Group AS that was supposed to leave for its first research voyage last year, in 2021. The 182.9 meter (600′) long ship would have dethroned Solaris by 40 meters if it wasn’t for a delay of its launch.

The next launch date was scheduled sometime in 2024. The yacht will provide accommodation for up to 55 scientists and 35 crew for a research and exploration trip, or 36 passengers and 54 crew for a luxury voyage.

The delay seems to be related to technical issues relating to the ship’s weight.

It’s said that the difference between boys and men is only the size of their toys, and explorer yachts seem to prove that.

These are some of the best vessels for exploring our oceans and seas, able to reach the farthest and most remote corners of our planet, and providing an impressive array of options for exploring the world under the surface.

Tags:
Previous Article
These are the 20 Fastest SUVs in the World Right Now
Next Article
The 24 Best Hotels & Resorts in Barbados