The Top 10 Most Expensive Medieval Weapons Ever Sold

Man’s never ending fascination for the myths and legends of the past, for the events that today’s history books depict, has gone so far that today we love to recreate the archetype of those long gone times.

One of those idolized periods is the Middle Ages with its glorious battles, the medieval tavern atmosphere and audacious knights jumping to the rescue of damsels in distress. What’s more, the weaponry of those ages has a charm of its own, alluring collectors and museum visitors alike with the legends and the tales they left behind.

Such artifacts are considered extremely valuable nowadays, with collectors ready to pay huge amounts of money to get their hands on them.

So let’s take a look at The Top 10 Most Expensive Medieval Weapons Ever Sold:

10. A Kamakura Katana from the 13th Century 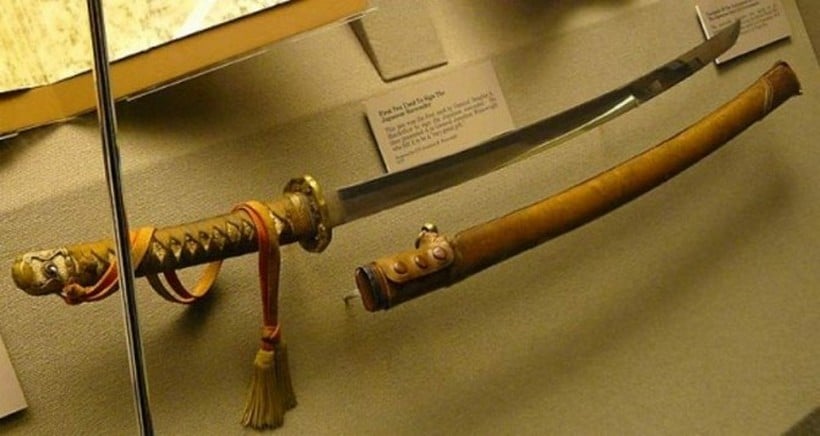 Renowned all over the world for their deadly efficiency, the Japanese Samurai Swords also known as Katanas bear an immense cultural significance to Japan’s history. The katanas are masterpieces made from only the best materials, and the total number of 125 in existence today made them priceless.

In 1992, Dr. Walter Ames Compton sold 1100 swords from his collection for a total of $8 million in just one day. The most precious one was a Kamakura from the 13th century which he sold to an anonymous collector for the impressive sum of $418,000, making it the most expensive katana ever sold.

Admiral Horatio Nelson is one of the most admired leaders of the past. His skills and leadership as a flag officer in the British Royal Navy led to several victories in the Napoleonic Wars, eventually finding his end during the Battle of Trafalgar in 1805.

His belongings – documents, medals, jewels and his sword – were kept in a trunk under the care of Alexander Davison until 2001, when they were revealed, cataloged and put on auction at Sotheby’s in London right after. The sale brought over 2 million pounds and the sword alone raised a pretty $541,720 due to the admiral’s fame. 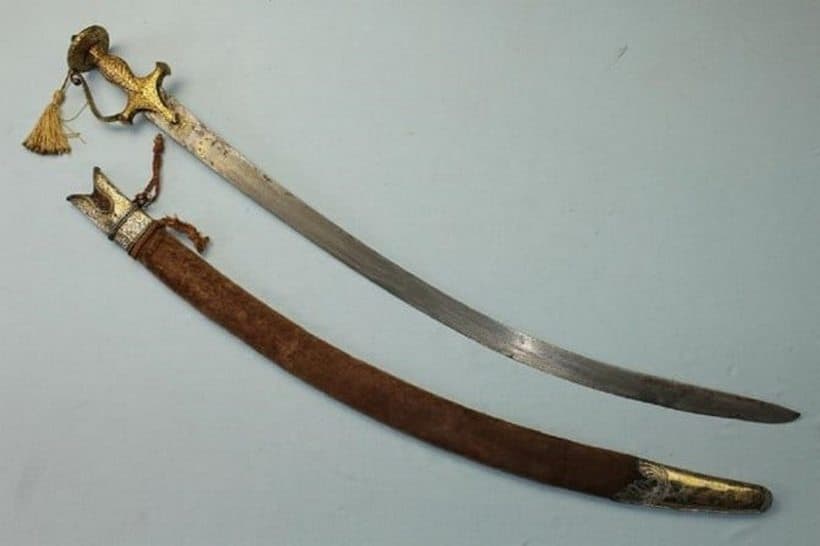 A talwar is an Indian curved sword used by the infantry and cavalry in the past, though they still use the same term today to describe a sword or dagger in general.

One amazing exemplary was sold in 2007 at Sotheby’s for no less than $717,800, despite the fact that its value was initially estimated at only 60,000 pounds. According to historians, the piece – bedecked with gold and poppies and lotuses – dates from the 17th century and seems to have been designed for the Imperial Court, to be used by the Emperor himself. 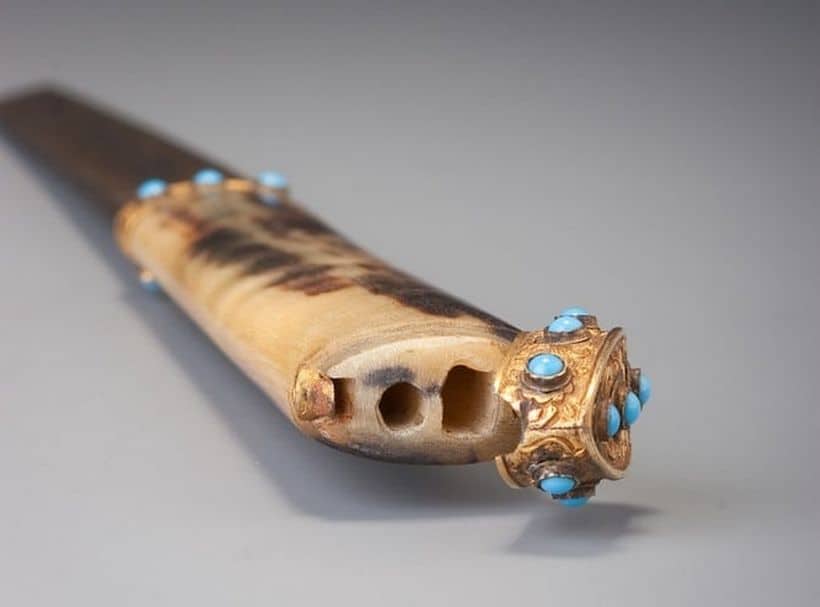 Qianlong, the sixth emperor of the Qing dynasty, reigned from 1735 to 1796 and retained ultimate power until his death in 1799. Given his life, the weapon he carried had to be fit for such a ruler and worth a royal treasure.

His Imperial Hunting Knife has a blade made from gold inlaid with turquoise, coral and azure while the hilt of the knife was made out of antelope horn with a secret opening for chopsticks and a toothpick – which is where the Swiss Army Knife must have been inspired from. The scabbard of the knife was made from rhinoceros horn, adorned with six dragons flying through clouds above the waves. The knife was sold at Sotheby’s for a whooping $1.24 million. 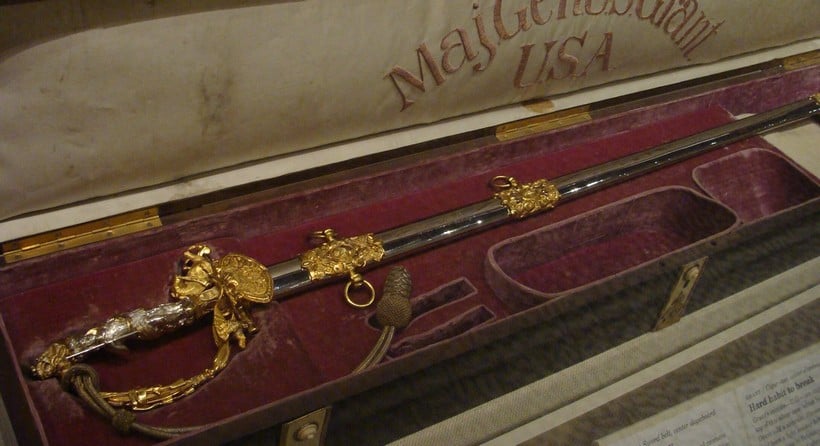 The sword was crafted by a silversmith from St. Louis and the jeweler Henry Folsom from pure silver and gold and embellished with 26 mine cut diamonds forming the U.S.G. monogram. The goddess Victory with the eagle spreading its wings above it is sculpted on the sword’s grip. It raised $1.6 million in 2007 at the Heritage Auctions.

5. The Gem of the Orient Knife 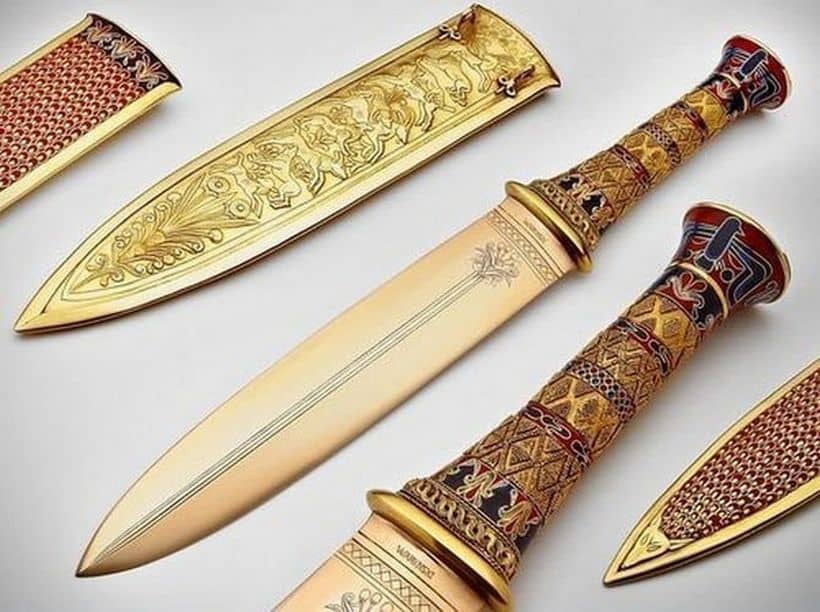 Designed by Buster Warenski in 1966, The Gem of the Orient Knife took 10 years to complete and boasts 153 emeralds, 9 diamonds and plenty of gold.

Worth no less than $2.1 million, it holds the title as the most expensive knife in the world, rising the prestige of its creator and making him one of the most famous knife-makers in the world.

4. The Dagger of Shah Jahan 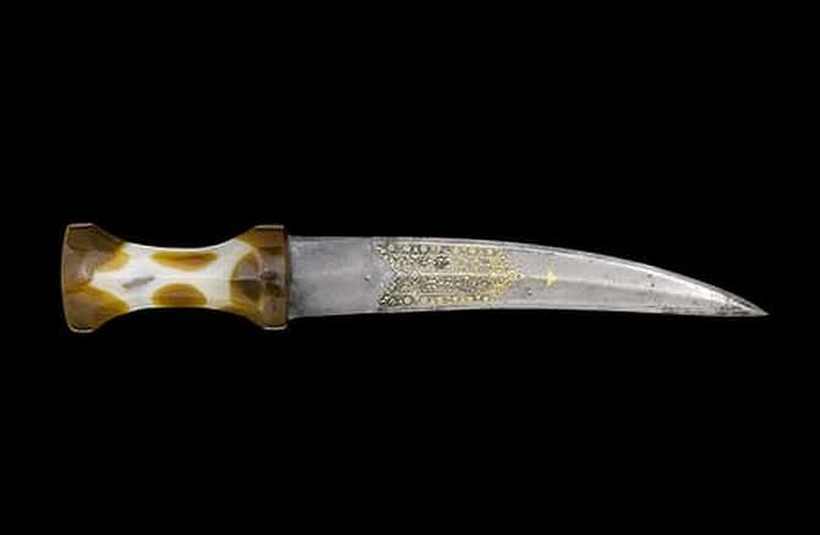 Shah Jahan, the 5th Mughal Emperor of India between 1628 and 1658, was famous for the impressive architectural projects that took form during his reign, with the most famous of them being the Taj Mahal, built for his wife Mumtaz Mahal.

His dagger, inscribed with the name title and place of Shah and the dome of heaven emblem, was sold by Jacques Desenfans at the Bonhams Indian and Islamic sale of London in 2008 for an unbelievable $3.3 million. 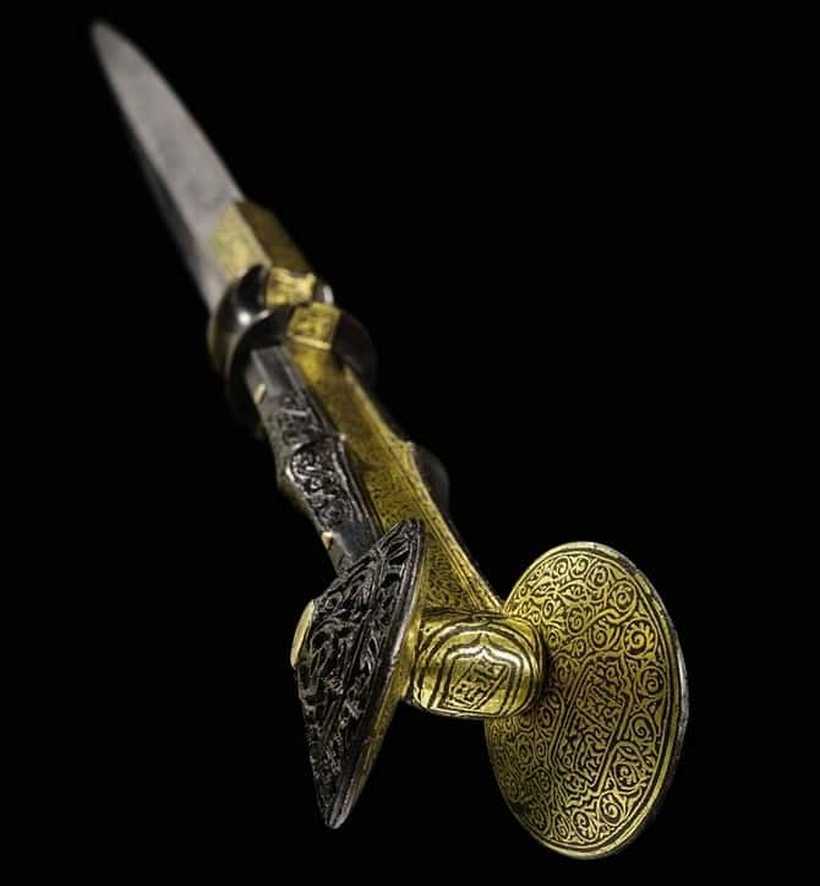 The Ear daggers originate from North Africa and got their name from the hilt pommel with two flattened discs. They were used throughout Europe during the 15th and 16th centuries.

The one in question features hunting scenes, with a double sided blade bedecked with gold and kufic inscriptions and a horn made grip. The precious artifact was sold at Sotheby’s in 2010 for $6 million.

2. The Gold-Encrusted Saber of Napoleon Bonaparte 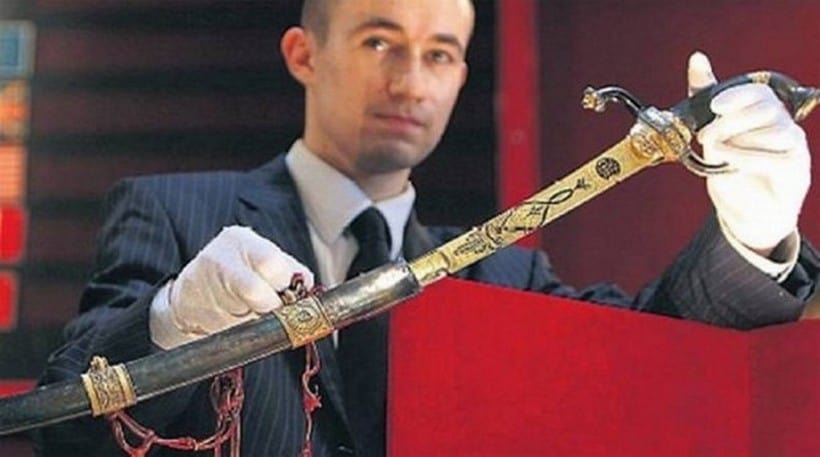 Used by Napoleon Bonaparte in the Battle of Marengo in 1800, his sword was passed along the family line and it’s considered a historical monument which cannot leave France.

Created by Nicolas Noel Boutet, the saber features gold decorations and an ebony handle. It was sold by a descendant of Napoleon’s brother to another descendant in 2007 for the sum of $6.5 million. 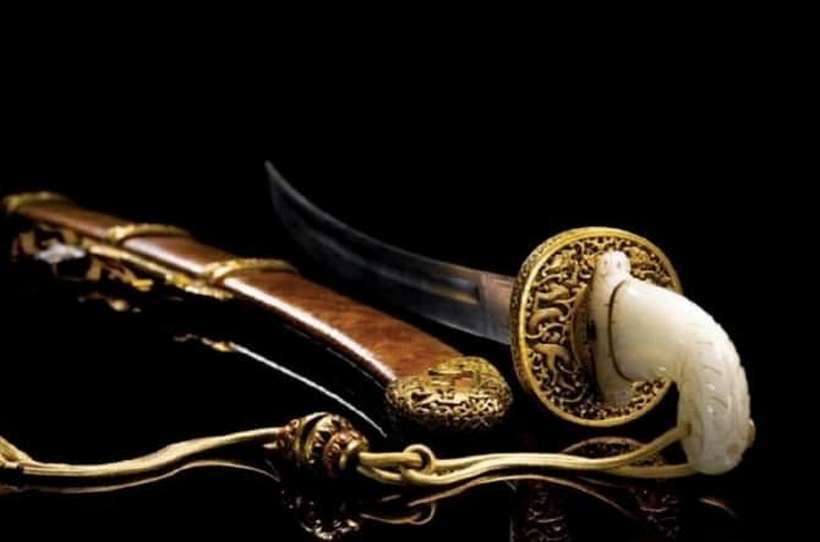 The Bao Teng Saber was crafted in the Palace Workshops of the Imperial Household Department during the Qing Dynasty and represents well the aesthetic of the period. It has a steel blade decorated with inlaid gold, silver and copper.

The title Bao Teng means ‘Soaring Precious’ in Chinese. The S shaped blade has a white jade handle with ornate leaves. The first time it was sold in 2006, it raised $5.9 million and the second time, two years later, its value upped to an astonishing $7.7 million, making it the most expensive medieval weapon ever sold.