Home ‣ Luxury Lists ‣ The 10 Most Expensive Knives in the World

The 10 Most Expensive Knives in the World

Ever since the dawn of time, knives have been in any man’s arsenal, guiding his passage from wilderness to civilization. Today this wonderful tool is mainly used for cooking but there are also hunting knives and camping knives made for practical uses like the Swiss army knife.

We also have things like the key shaped pocket knife or the knife pistol which, although they have no real purpose, still prove how beloved knives are right now. Today we’ll show you the 10 most expensive knives in the world, which are so ridiculously expensive due to their rarity, decorations, the cutting edge technology or their extraordinary efficiency. 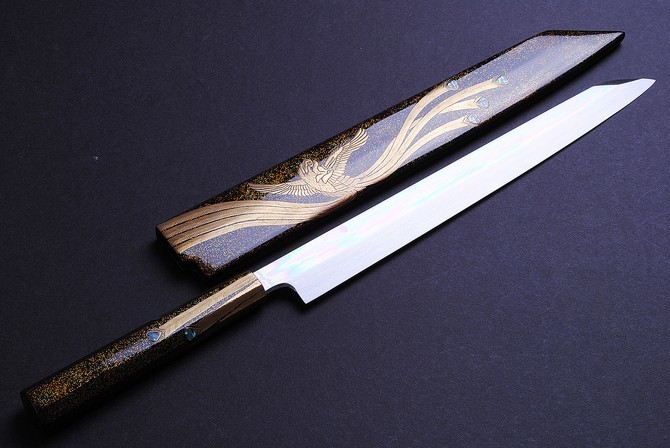 Made in Japan by the Yoshihiro knife masters of Sakai, this stunning slicing knife features lovely decorative elements inspired by the phoenix, the sacred bird of this region. Priced at $5,000, this knife has a sharp blade that was obviously made for slicing, more specifically to cut fish into sashimi with a single stroke.

The beautiful phoenix on this knife was lacquered with a traditional technique entitled Fuki Urushi, which highlights the natural beauty of the wood grain while also increasing its durability. This method has been used for decorating objects for over 9,000 and it’s still used to this day due to its efficiency. The waves pattern that can be seen on the blade resembles the shape of the Fuji Mountain under a full moon. 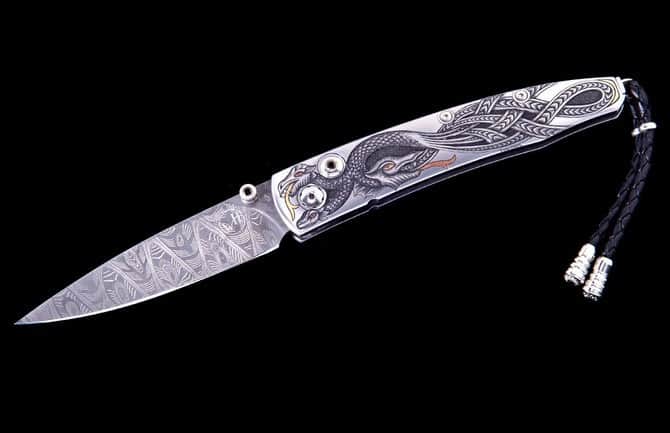 William Henry launched this exquisite, hand-engraved knife, featuring 24 carat gold and copper inlays that were inspired from a medieval dragon with three heads that bites its own tail.

The inlays were carved by Jake Newell and the blade was hand forged by Mike Norris from Damascus steel. It has a one hand button lock and comes with a special, leather carrying case and a lovely wooden presentation box. The price for this knife is $5,500. 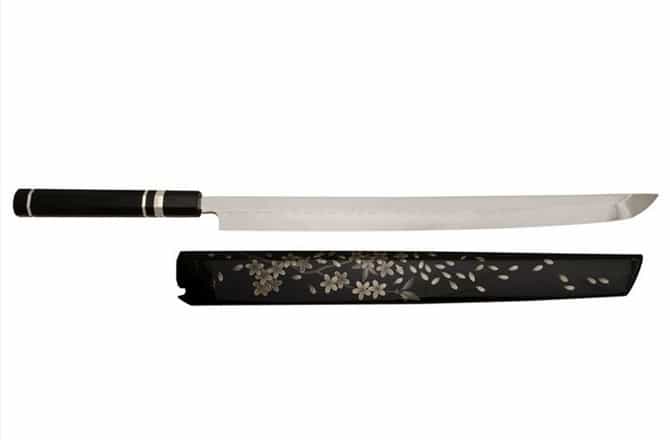 With a long name like that, the blade had to be extremely long as well, that’s why we could say this knife is more of a sword due to the 15.4 inch length of the blade. It is a traditional Japanese knife made by Yoshikazu Ikeda from white steel featuring a single edge held by a Corian handle.

The sheath was hand decorated through the Wajima Lacquer method, which strengthens the material, and the cover is also decorated with cherry blossoms, one of the symbols of Japan. The price for one of these beauties is $6,980. 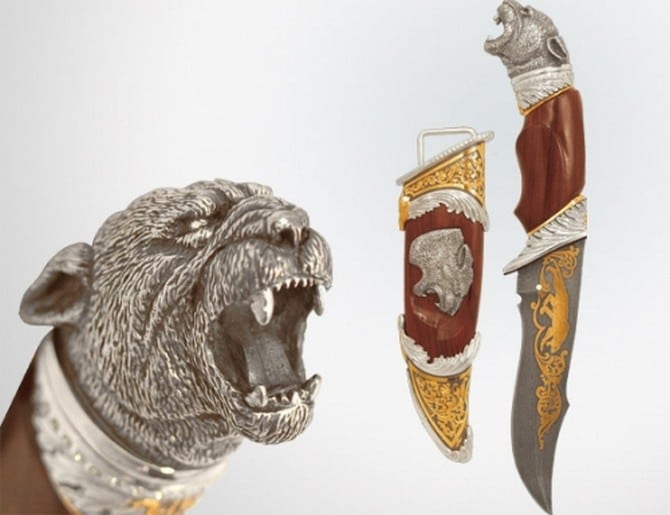 Although it has the shape of a hunting knife, the ornaments on this beauty make it more of a decorative piece, sold in luxury shops for $8,150. Its blade is made of Damascus steel with the handle having a panther head sculpture and walnut wood over the top.

The metal on the handle is sterling silver adorned with gemstones while the sheath is made from walnut and silver with gold plating as well. The blade of this incredible knife also has some areas covered in gold and silver with interesting needle engravings. 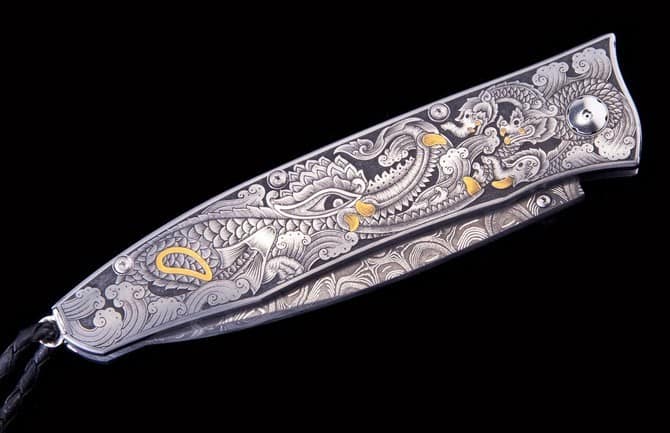 This staggering knife is also made by William Henry featuring a Hornets Nest Damascus blade that was hand forged with a one-hand button lock similar to that of the Ouroboros. With stunning decorations and a breathtaking handle that was engraved with 24 carat gold inlays which depicts a hydra, this knife is beyond awesome.

It’s priced at $12,500 and its handle makes it even more impressive, combining walnut wood with precious gemstones. 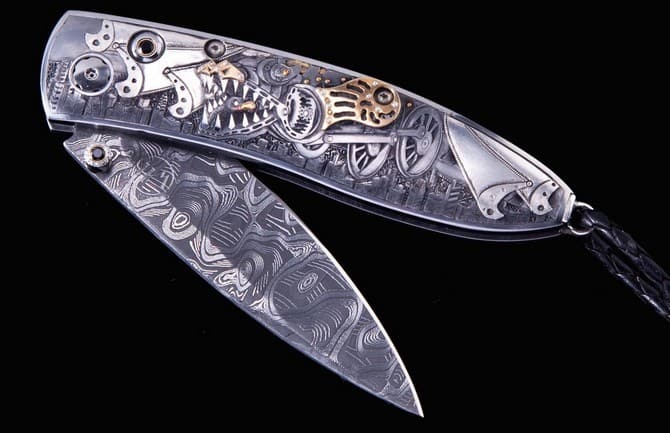 Made through the collaboration between William Henry, Mark Hoescht and Mike Norris, this amazing knife has a “rich and intricate balance between elegance, function and superlative artistry”, as its creators best describe it.

The steampunk aesthetic makes is appear quite complicated with sculptural details that were engraved with 24 carat gold and copper inlays. The blade is also hand made from Damascus steel and the fact that this knife was just a one-off piece puts its price to $18,500. 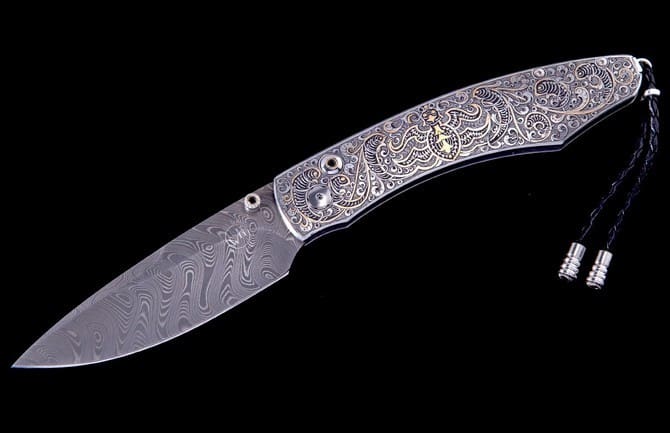 Another creation of William Henry, this knife features a blade that was hand forged from ‘Boomerang’ Damascus steel, with a ‘lace’ design that gives its name. The manufacturers of this beauty needed hundreds of hours to finish the small engravings by hand and this alone makes its price quite high.

When you add the 24 carat gold and the unique design, you will understand why this wonderful knife is worth $25,000. It’s “The hallmark of William Henry’s most exclusive creations; a timeless heirloom to be proudly worn and used for a lifetime before handing it down to another generation.”

Claiming to be the sharpest knife in the world, this one stunning knife was designed by Quintin Nel and Hoffman/Pieper with a handle made from sterling silver and a blade of carbon steel. There are eight diamonds embedded into the handle and its shape was inspired from ancient knives to be beautiful and highly efficient.

The blade was coated in titanium and Teflon to ensure the utmost durability and sharpness. Priced at around $40,000 (almost the same as a decent new car), this knife comes in a beautiful piano box with a diamond ring included, since the two go so well together, hitting the jackpot for him and her both. 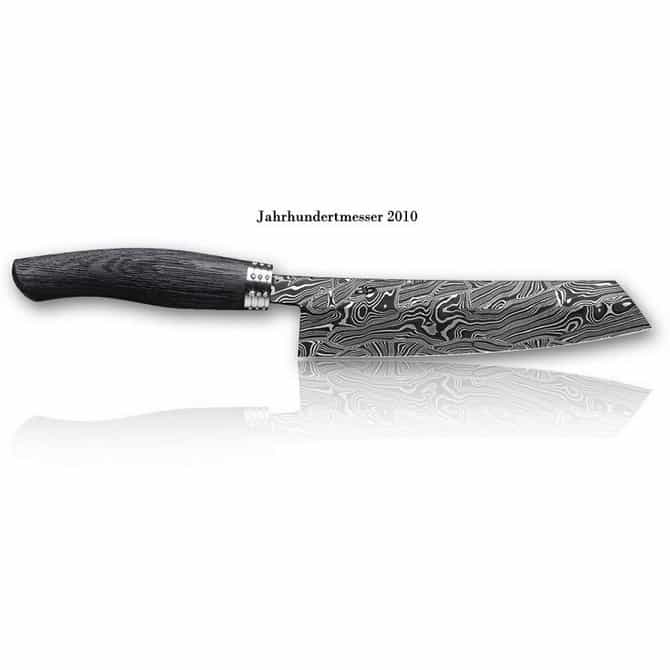 Another eye popping Nesmuk creation, the Jahrhundert Messer is actually the most expensive kitchen knife in the world, featuring a blade forged by Lars Scheidler with 640 layers of Damascus steel and an edge of carbon steel.

The handle of this incredible piece comes from a bog oak that’s 5,000 years old which was beautifully decorated with platinum and 25 diamonds, so it is only normal that this exquisite knife is priced at almost $100,000.

1. The Gem of the Orient 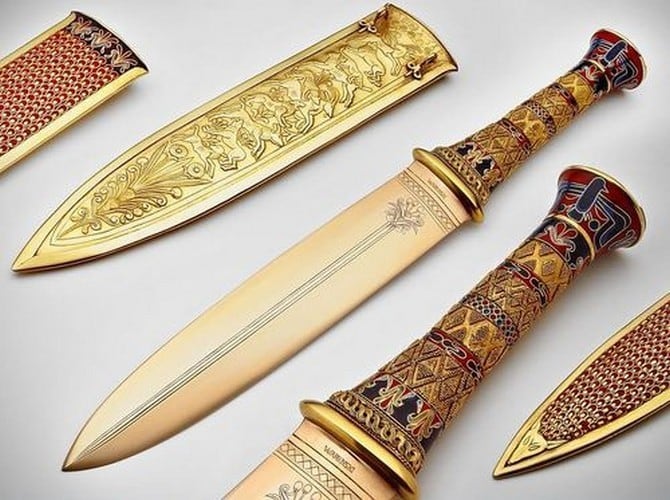 The Gem of the Orient is actually made by Buster Warenski from Nevada, USA and it is currently the most expensive dagger in the world due to the amount of precious gems which adorn it. With 153 emeralds and nine diamonds decorating it and featuring a stunning handle made of jade with gold filigree, this knife is beyond stunning.

The beautiful object took no less than ten years to complete and it was sold at an auction a while ago for $2.1 million.