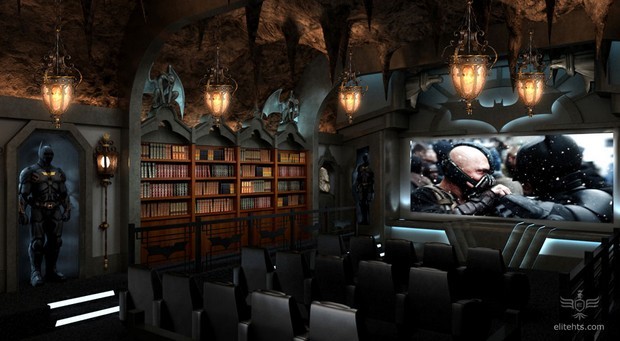 Excuse me, but I have to say this – this is the best thing I’ve seen in the last weeks, miles ahead of everything else. I give you the Elite Home Theater Seating, a tribute to the end of the trilogy The Dark Knight Rises. This $2 million “Dark Knight”-themed custom home theater was commissioned by a private residence in Greenwich, Connecticut, and spans over 12,000 feet.

The room reminds of the Wayne Manor, embellished with a mighty Grandfather clock which swings to reveal a set of elevator doors and William Shakespeare stacked bookshelves. To get inside the elevator, you need to scan your fingerprint on a glowing bat symbol at the base of the button panel.

Upon entrance, backlit life-size Batsuits garnish your way in. The cavernous, mystical lair sports a total of six Batsuits, almost like a hidden, medieval armory. The 180” screen, the center piece of the cavern, is flanked by two Batsuits. And, the other piece du resistance of this superb home theater is the 15 feet long and 19 feet wide size replica of the Batmobile Tumbler, viewable via a secret hook on the bookshelf.

This $2 million home theater ultimately boasts with a large gas fireplace with “Batcomputer” stations of both sides, a reminder of the malevolent ones Batman had to fight with, during the trilogy. 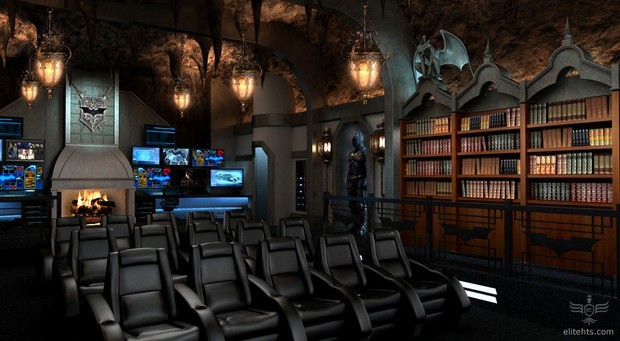