Home ‣ Epicure ‣ The Top 20 Most Expensive Whiskies Ever

The Top 20 Most Expensive Whiskies Ever 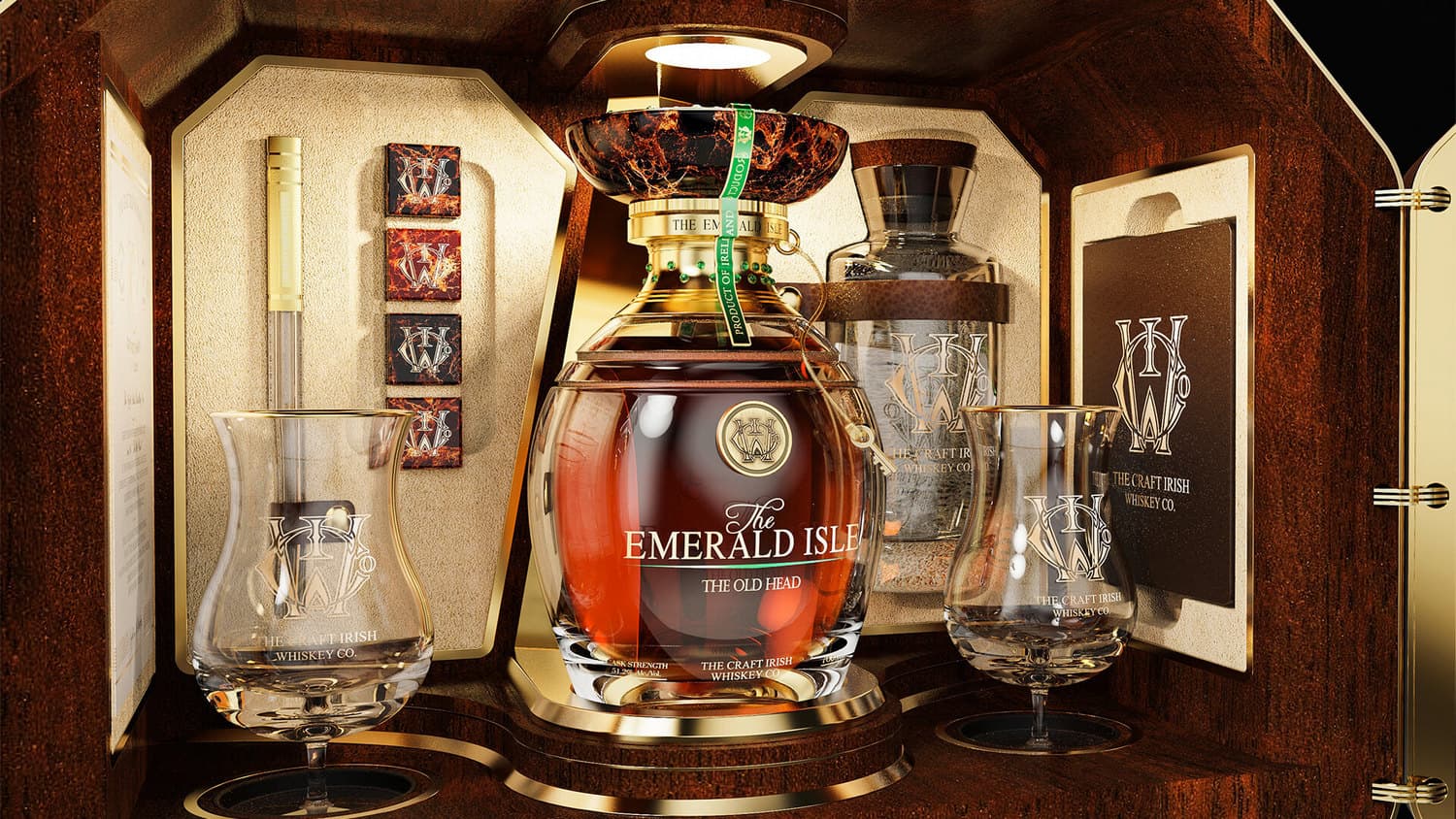 Whiskey is one of the most popular spirits ever made. Some of them are so special they have sold for astounding sums of money at some point. There are a few options available, but most of them are not for sale any longer.

These are not your regular bottles you can grab at your corner liquor store, so don’t be disappointed if you can’t find them. But then again, who can afford to buy a bottle that costs more than most people’s homes? Surely it’s not in everyone’s budget. But it will still satisfy our curiosity, that’s for sure. 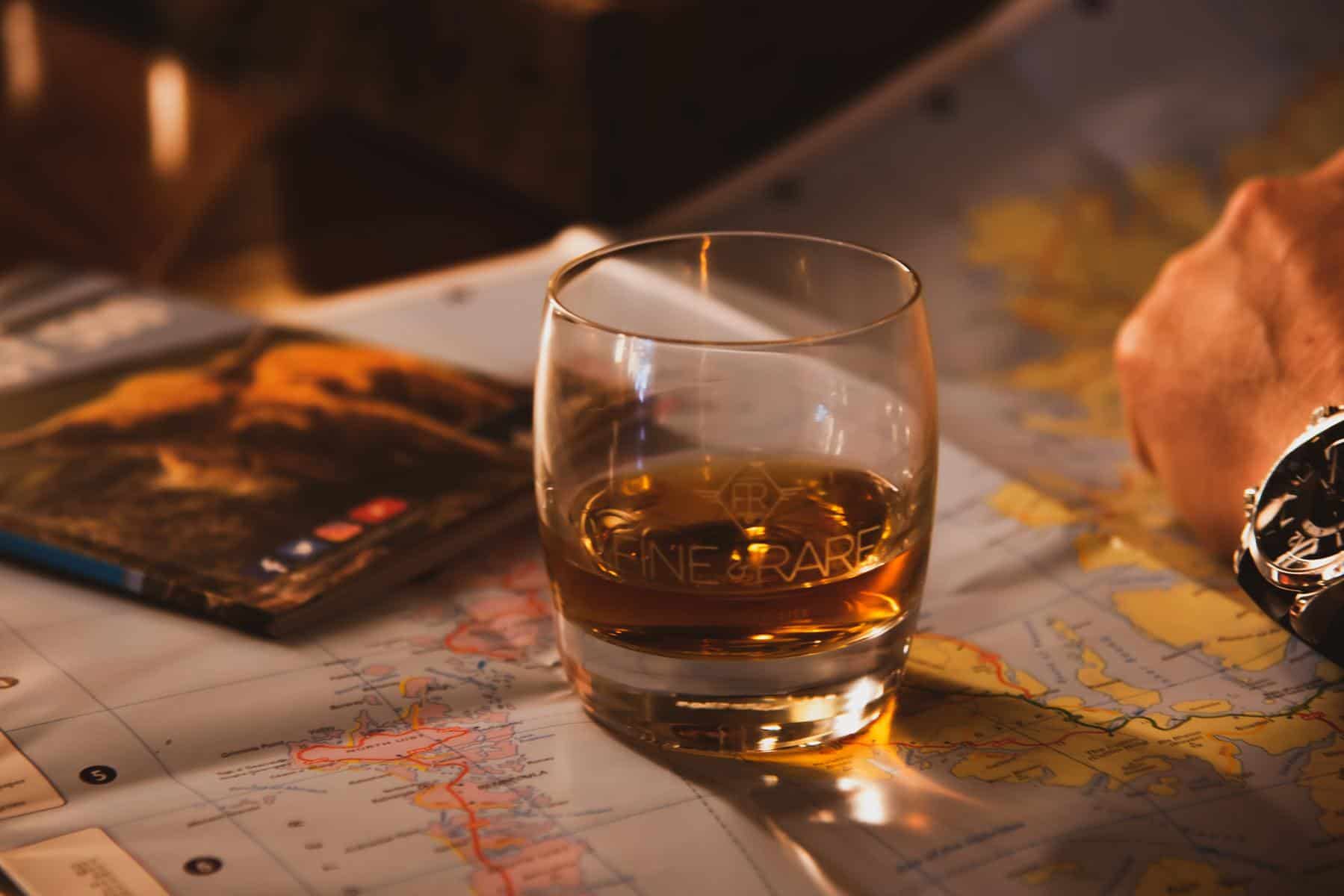 Here’s a quick reminder that whiskey is a distilled alcoholic spirit that is made from mashed fermented grain. The mash contains wheat, rye, corn, or barley, or some combination of these.

The liquid that results from this mash is aged in wooden barrels or casks for a certain time. It is a regulated spirit and the rules vary from country to country, but they all contain at least 40 % ABV, or alcohol by volume.

The Most Popular Types of Whiskies are:

Produced solely in Ireland, it is distilled three times typically. It cannot be aged less than three years, and some of them can spend three to four times that amount of time in aging casks. It is made from a blend of malted, or sprouted, and unmalted barley.

Scotch whisky is derived solely from malted barley, and it is produced in Scotland. It is generally distilled twice, but many of them use at least three distillations, some even more. Scotch has five variations: single malt, single grain, blended malt scotch whisky, blended grain scotch whisky, and blended scotch whisky.

This American spirit is distilled from corn. It originated in Kentucky, and there is also a special type of bourbon produced in Tennessee, or the Tennessee Whiskey. Their local laws require it to be made out of at least 51% corn, and it has to be aged in white oak casks.

This type is mostly a blended variety that is produced from corn, but rye, barley or wheat can be added as well. Regulations for production are very strict, but they are allowed some leeway in the flavoring and coloring steps. Generally, Canadian Whiskey is lighter and smoother than other whiskeys.

We could also add Japanese Whiskies to this list. 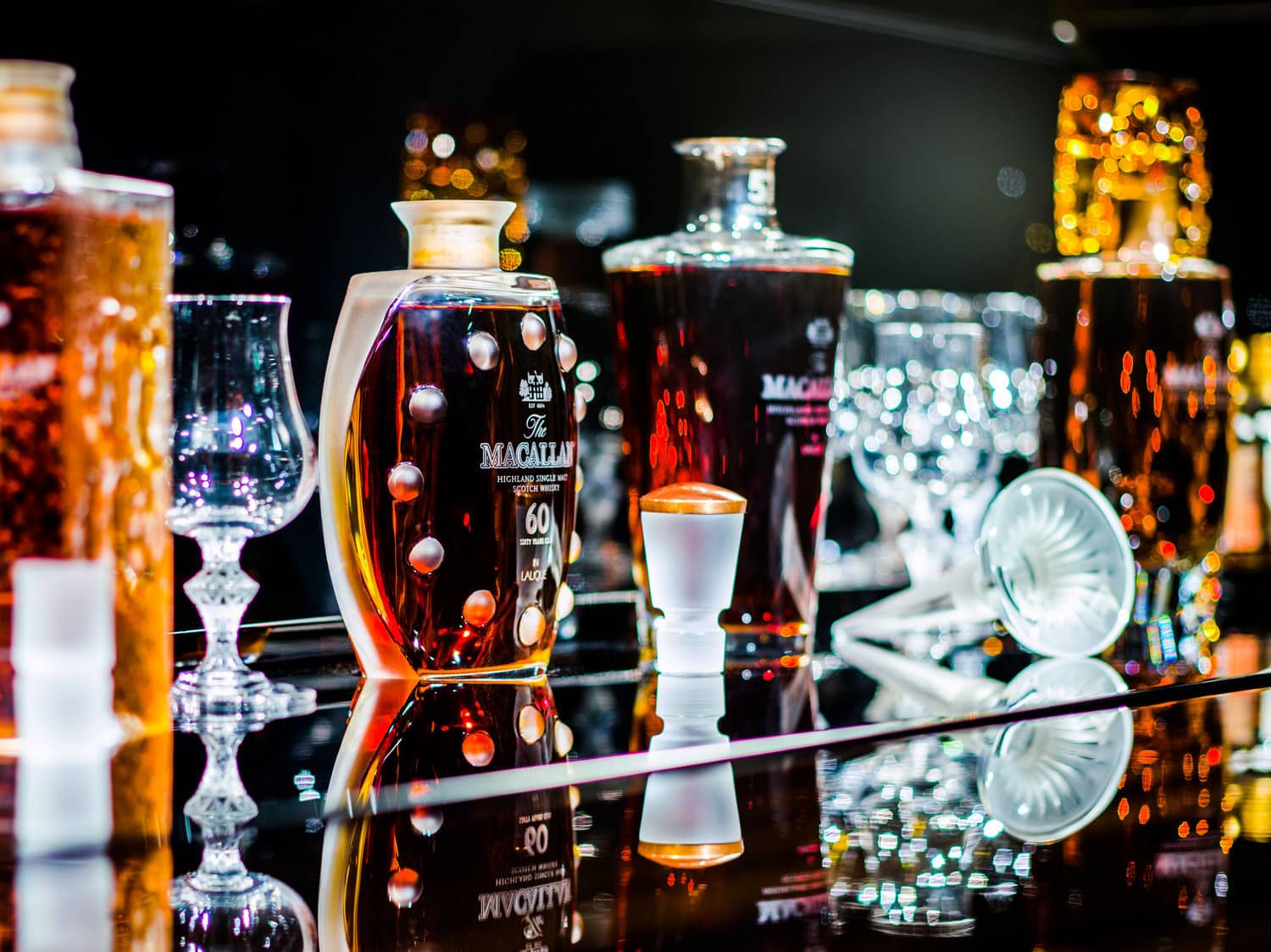 Depending on your taste there are many blends to choose from, even within a specific brand. At the moment Scotland is the largest whisky producer in the world with the US not too far behind, and surprisingly Japan in third position, then Ireland.

Now we will enumerate the 20 most expensive whiskies ever sold. Something to keep in mind is that, although the liquor itself is the best quality available, the containers they come in also influence the price greatly. 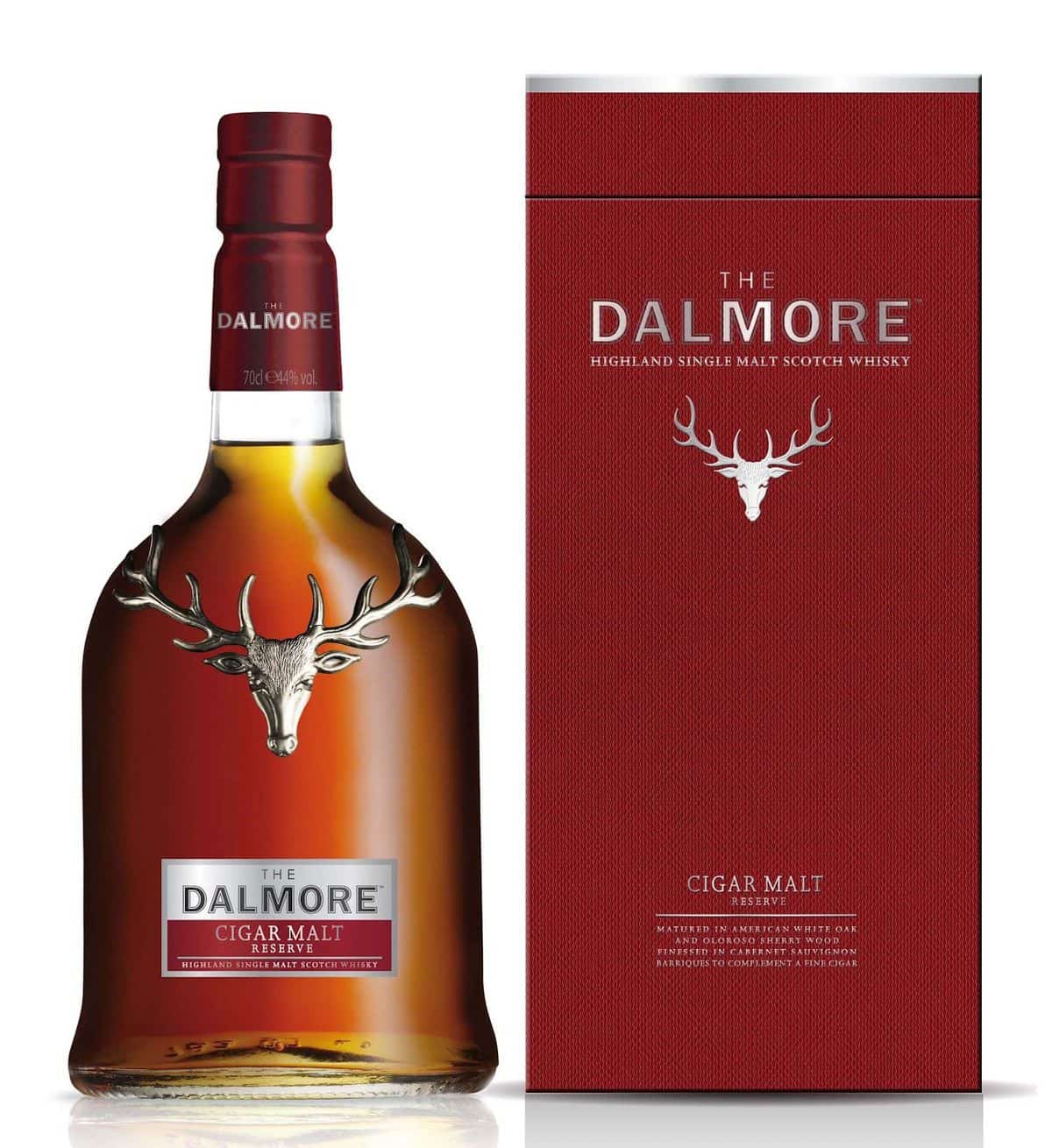 Brought to you from the Dalmore distillery, this is the most affordable bottle to make our list, priced at $58,000. Founded by Alexander Mathesoin in 1839, the distillery has been producing fine quality single malt Scotch.

Aged in multi casks, their 1942 was released in honor of its founder. The 62 bold Scotch is rare to find, which is why the price is so high. The distillery only released 12 bottles of this unique spirit. 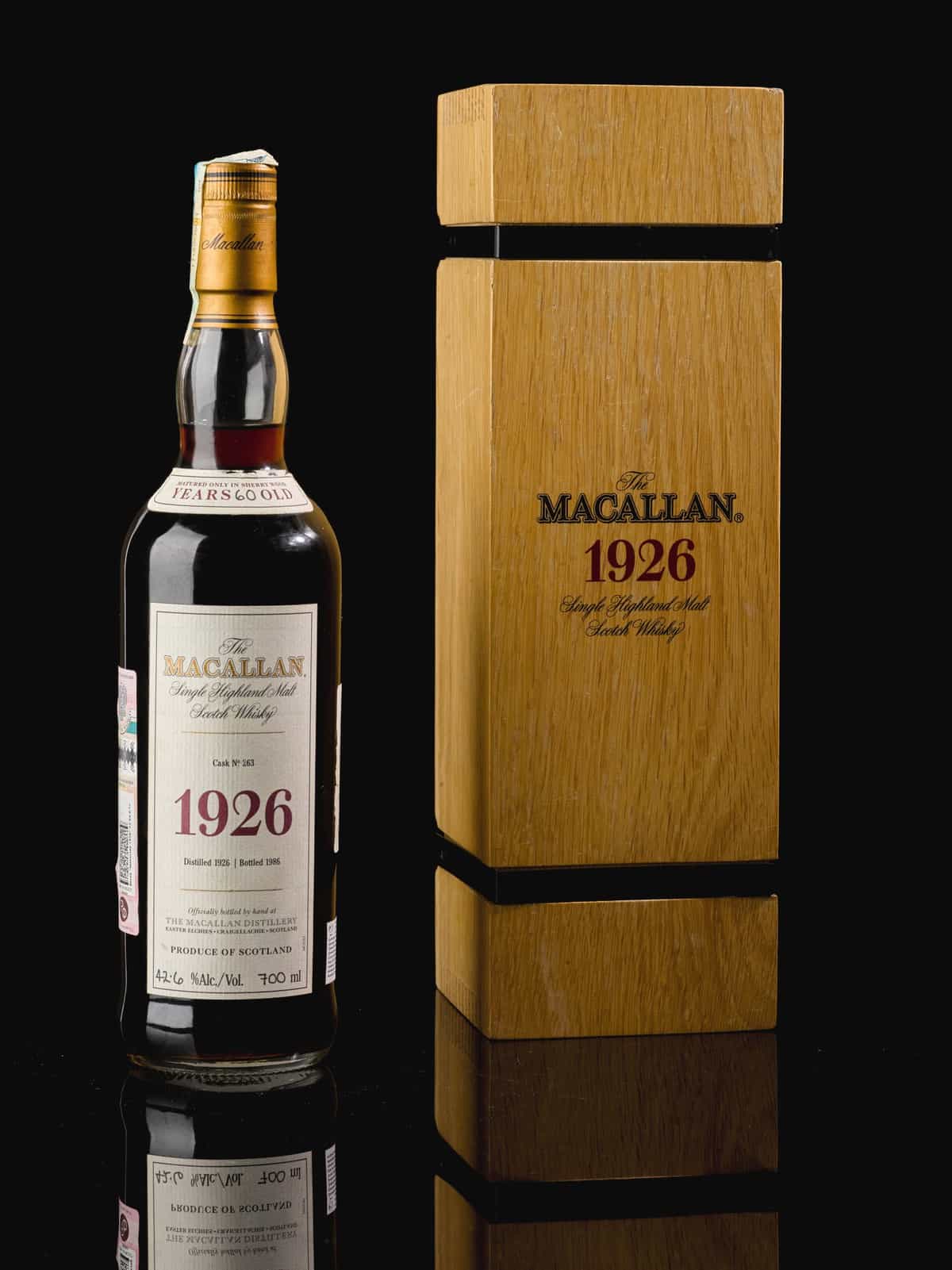 You will see the list dominated by Macallan whiskies, and this is their most affordable of the most expensive whiskies. Because it comes in a very limited supply their price jumped to $75,000 per bottle.

Sounds crazy, but the brand’s finest vintages were blended to create this unique blend. Their 1926 marks a very prosperous year for the distillery, it is their best in the Fine & Rare collection. 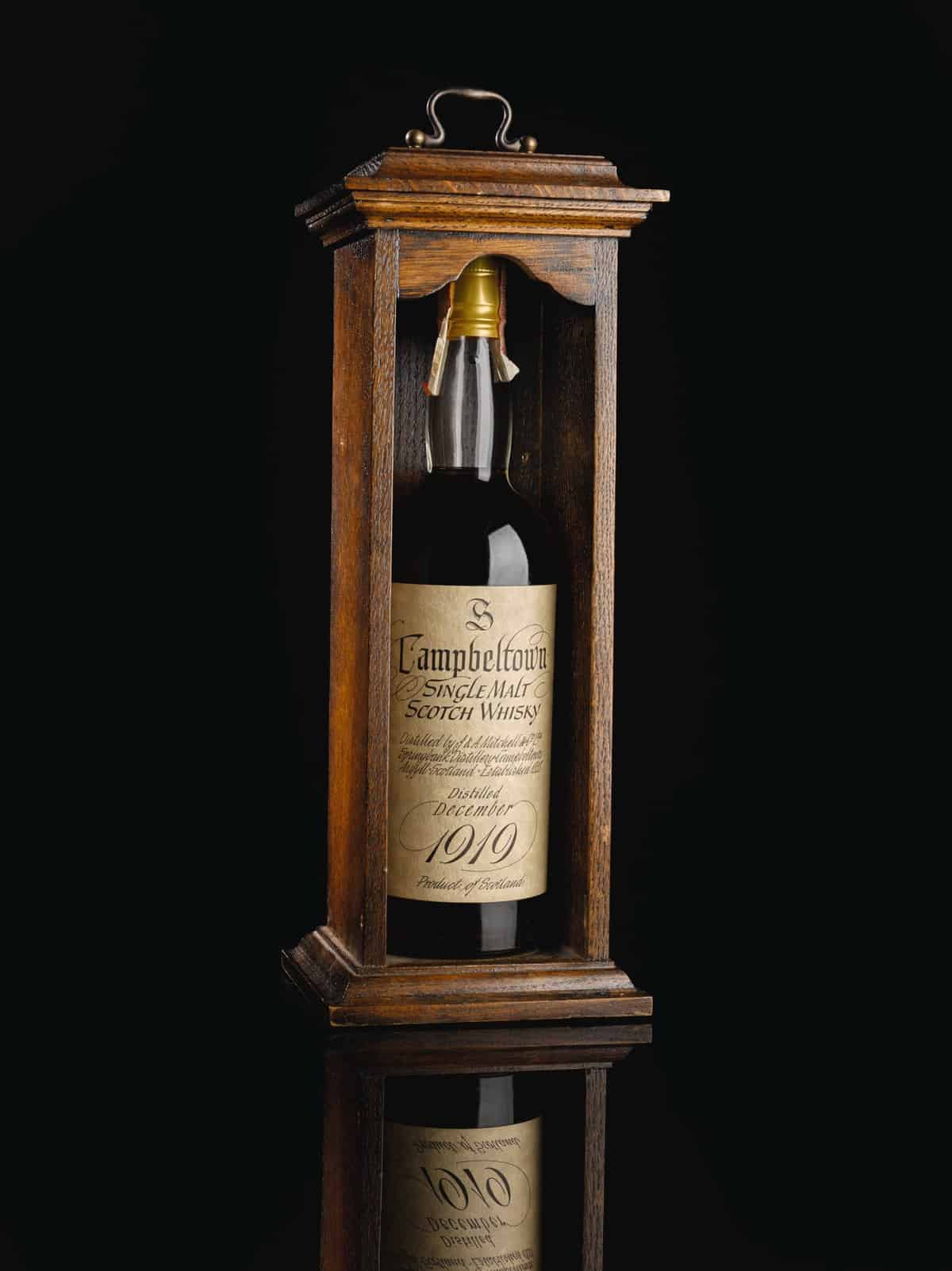 You might be in luck and still find a few of these bottles available online. This legendary Scotch goes for $78,000 because of its age. Produced in the Campbeltown region in Scotland, the aging process makes this vintage so dear.

This offering was distilled in December of 1919. It is a single malt that was aged for 50 years, and bottled in 1970. 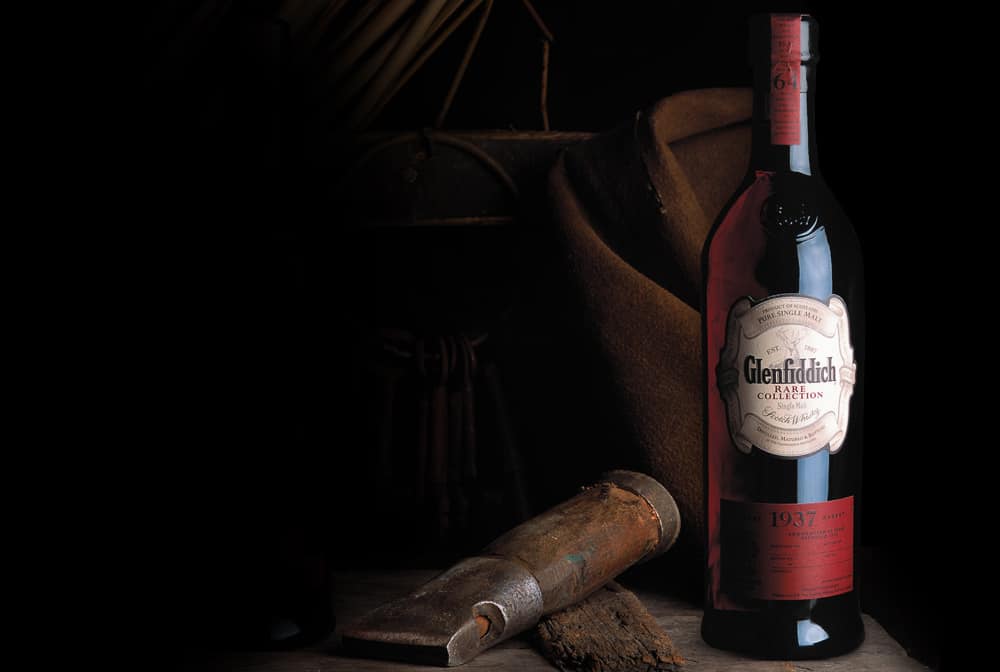 This offering comes from one of the oldest distilleries to ever exist. It is a single malt Scotch that is a very rare vintage. Aged in a cask that was originally filled in 1937, and it had fewer than 60 bottles available, one of them selling at an auction for around $85,000.

Rich notes of burned heather, cedar, chocolate, molasses, and oak are what makes this whisky so sought after. You might be able to get your hands on one if you’re interested. 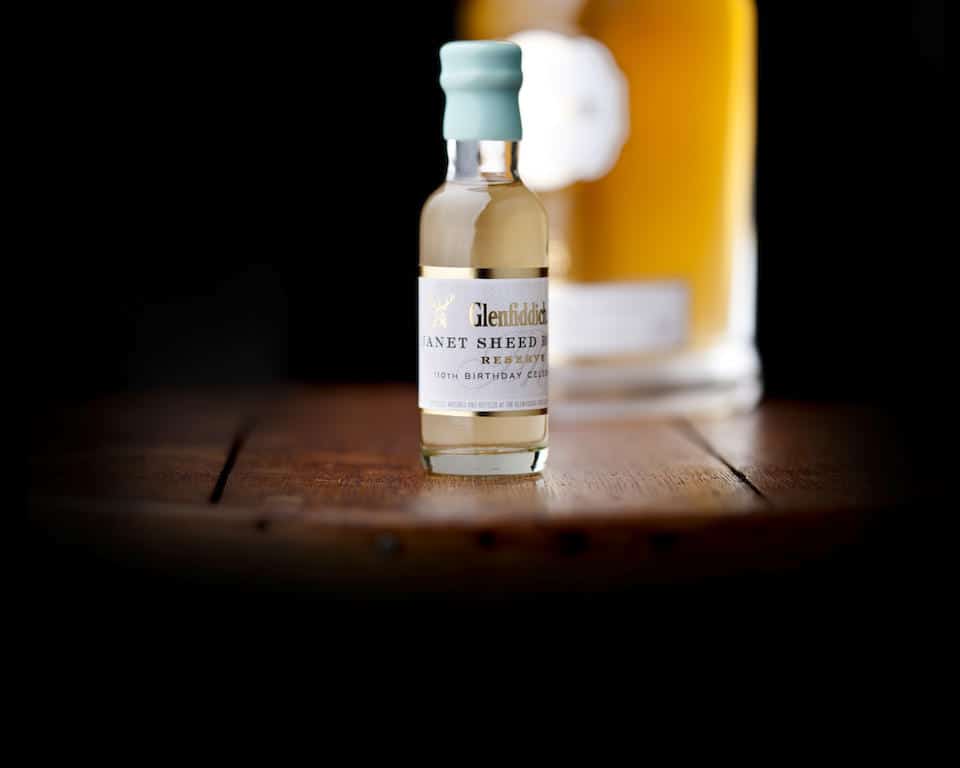 Sold for $94,000 at an auction in New York City auction in 2012, one of those bottles makes the list for being one of the most distinctive whiskies to ever sell. To commemorate the distillery’s 110 year anniversary, the brand released this vintage that was aged for 55 years.

This offering boasts barley, heather and pear notes. The reason it is so valuable is because there were only 11 of these bottles ever produced. 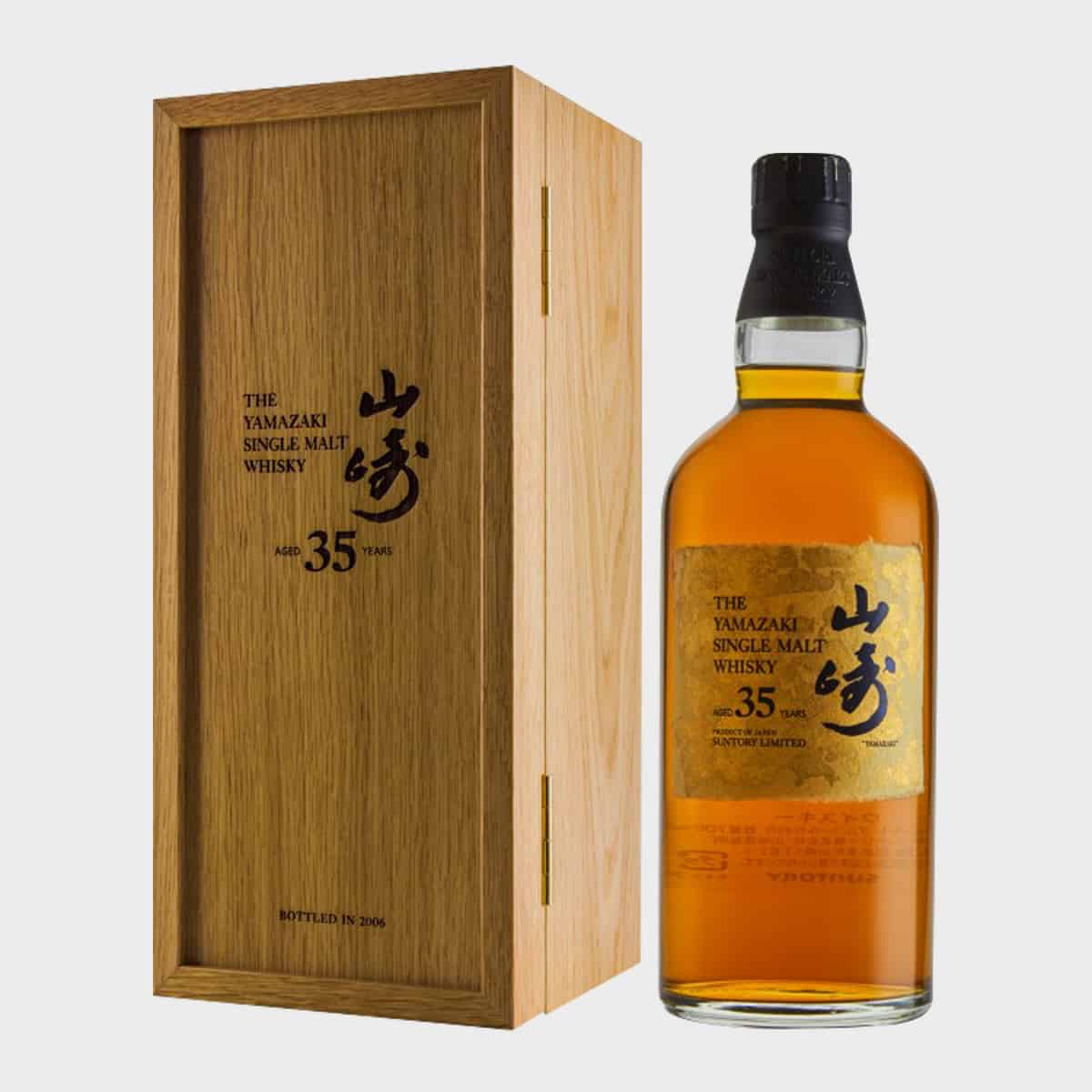 Founded in 1923 by Shinjiro Torii, this is the first Japanese commercial distillery. Their oldest offering to ever be created, this is a rare 35 year old that was distilled between 1966 and 1970. It was finally bottled in 2006, and it sold for $98,925.

A single malt variety, it was aged in special 90-liter Spanish second fill sherry casks. It was presented for sale in a well crafted wooden case. 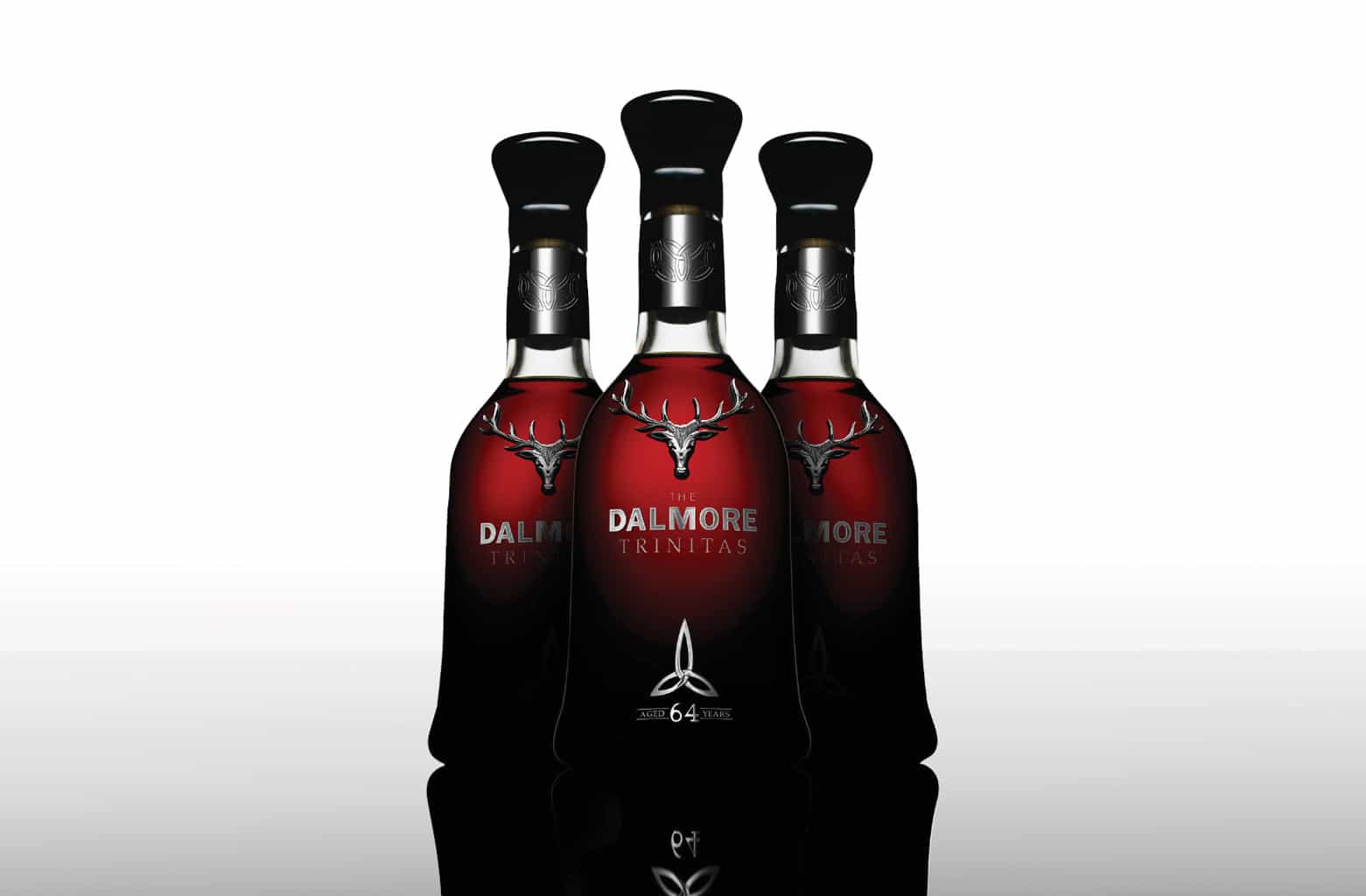 Dalmore could only produce three of its bottles because they had the older vintages in very limited quantities. That is the reason its last known available bottle sold for $160,000. 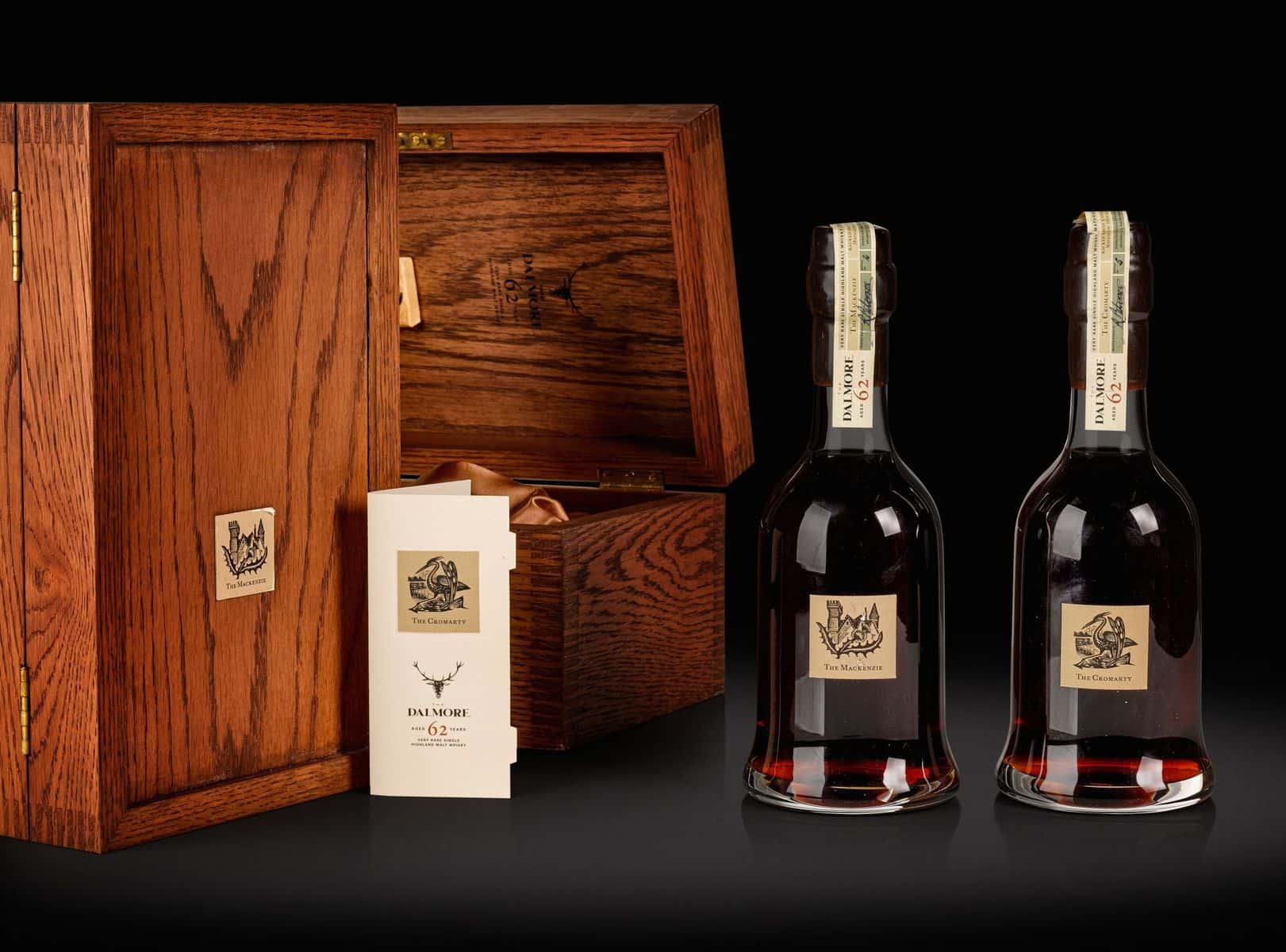 This is a vintage whisky that dates back to the mid-19yth century, making it one of the most expensive whiskies in the world. In this case, the vintage is partly responsible for the $250,000 price tag.

But the craftsmanship that went into creating the decanter also plays a part. Glassmakers poured over 100 hours of labor to create the mold used for this crystal and platinum decanter. It is simply gorgeous! 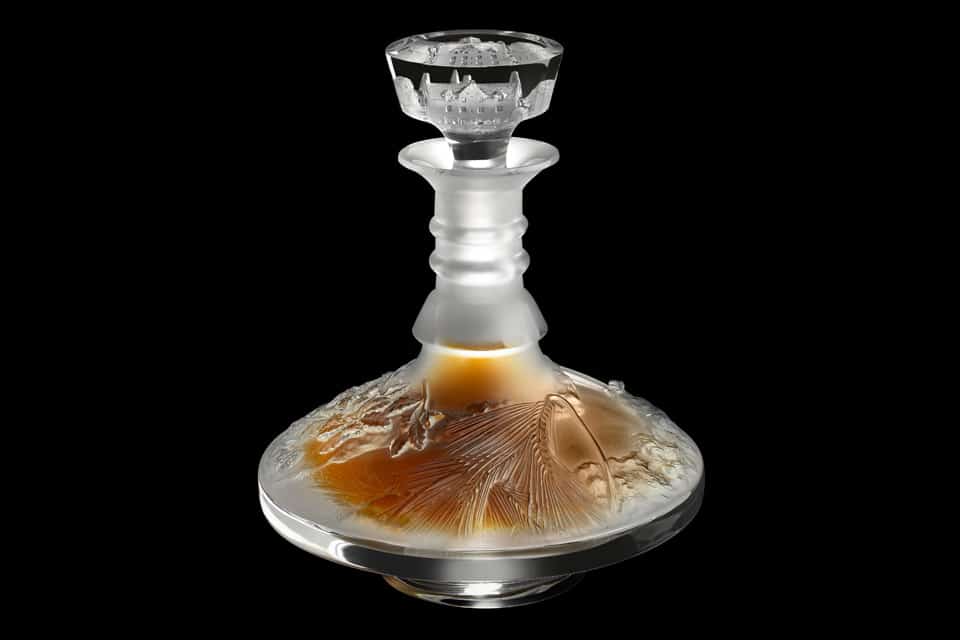 The Macallan 64 in Lalique Cire Perdue

The expensive decanter designed by famous French glassmaker Lalique is the reason this offering sold for $464,000. The craftsmanship of the glassmaking and the one-of-a-kind design cannot be recreated anywhere else.

The whisky is a blend of the house’s three best vintages, the 1946, 1945, and 1942. The Macallan 64 was made in Spanish oak barrels, which makes its taste one of the most renowned in the world. 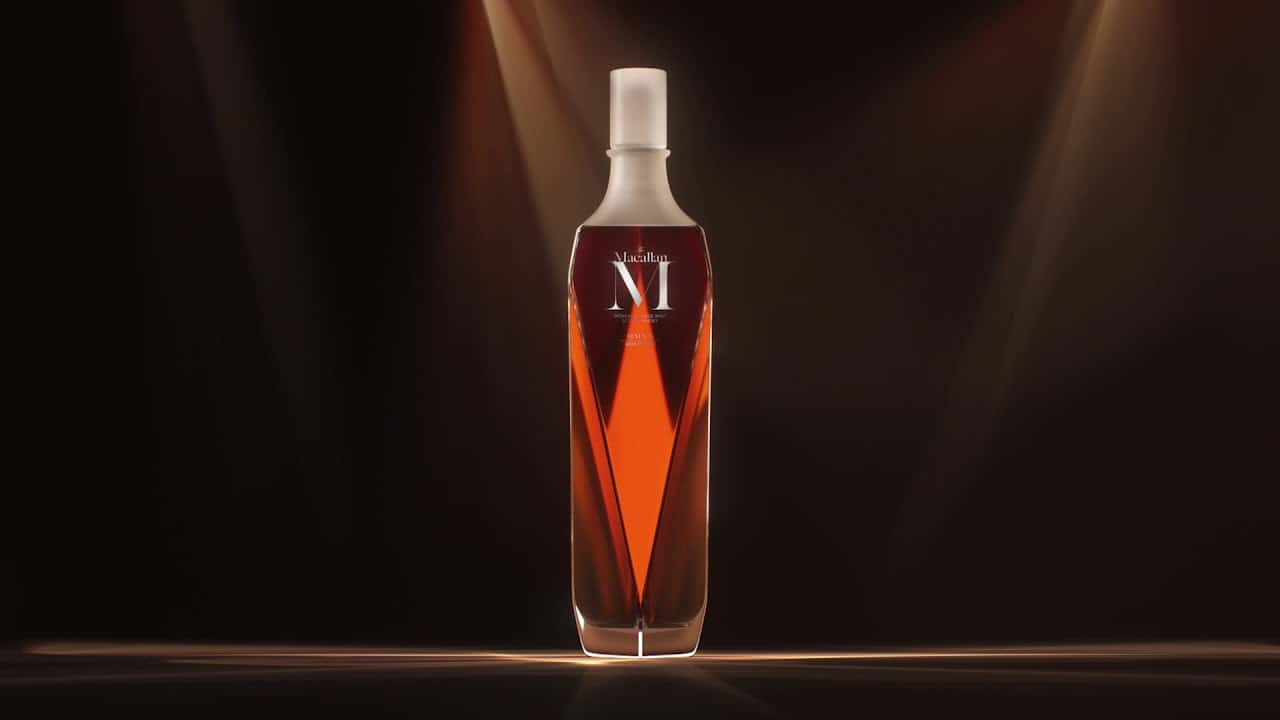 Another exquisite blend of vintages that range between 25 and 75 years old, the M collection was aged in Spanish oak barrels. The bold flavor is distinct due to their aging process, which makes it so valuable.

The 6-liter crystal decanter is unique, and it was handmade by seventeen glassmakers. With time it will become even more valuable than the $628,205 price tag it sold for last. A definite collectible! 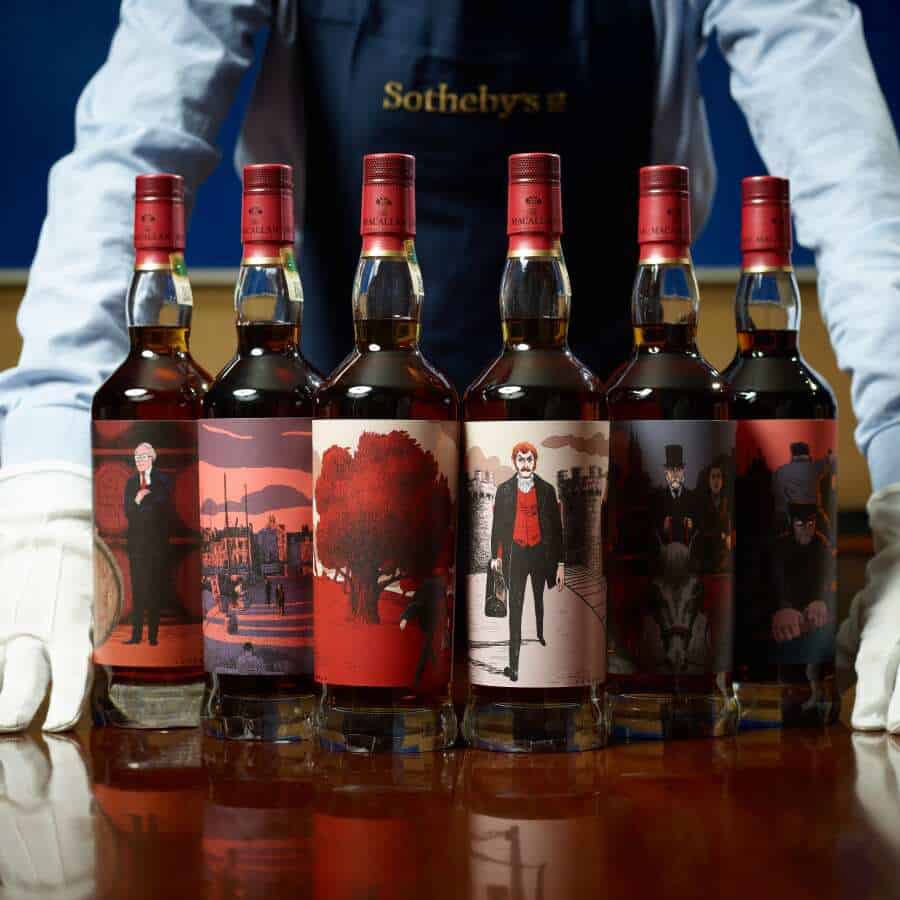 This collection of Macallan Red includes six of their finest 78-year old vintage and a 74-year old whisky as well. The reason collections sell for so much money, $975,756 in this case, is that you cannot find the bottles individually.

That is a reason they become more valuable. Also a work of art in itself, it is Spanish artist Javi Anarez that created, designed and signed every single label from the set. 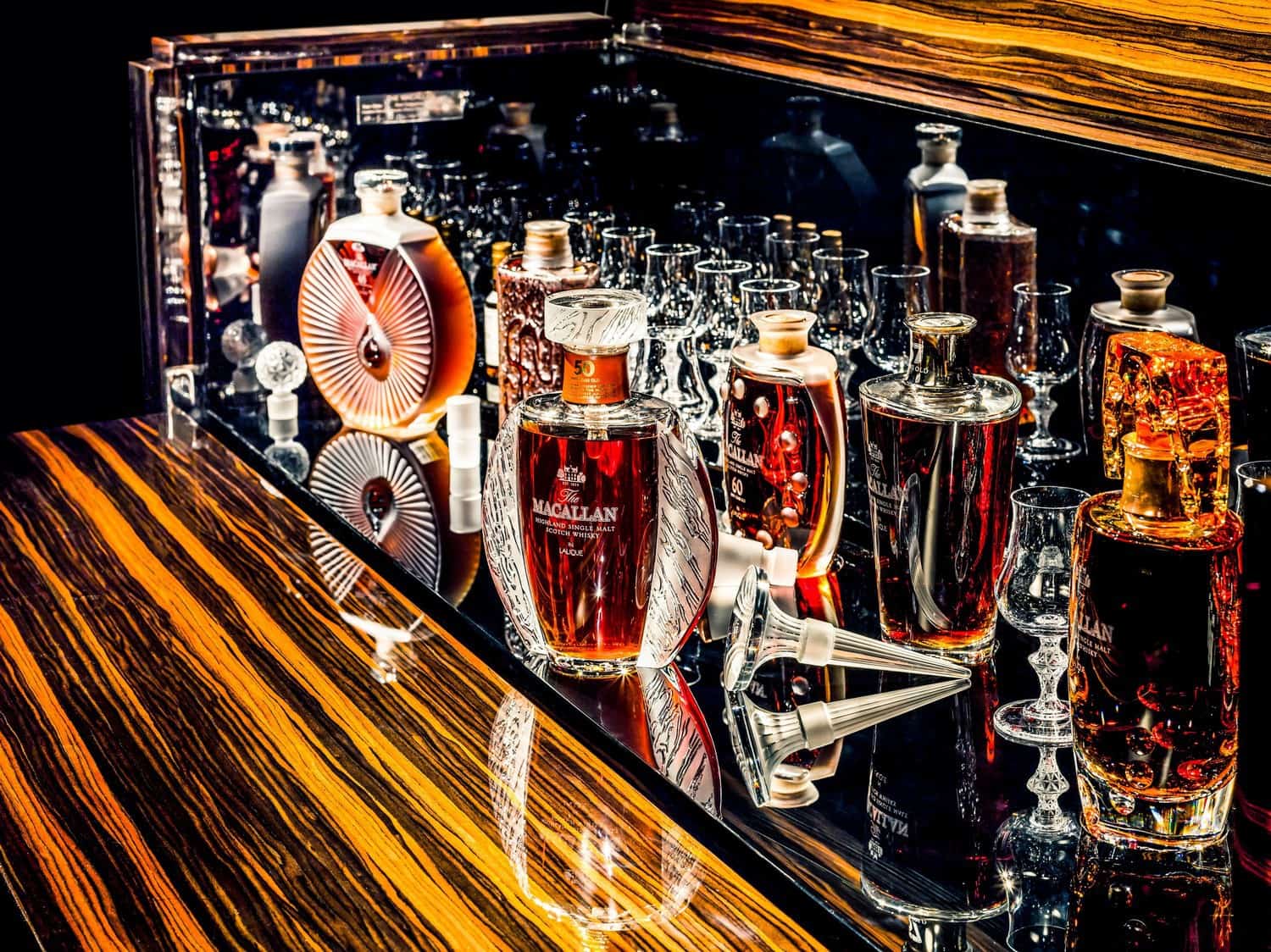 Six whiskies aged between 50 and 65 years constitute the Lalique Legacy Collection. The set of this unique blend is one of their most famous offerings, and the brand has many that are all special in their own way.

The decanters the vintages are offered in are known as the ‘Six Pillars Odyssey’. The whole set is sold in a cabinet made out of ebony, plus it includes six Lalique Macallan glasses and six miniature bottles. The price it sold at was $993,000. 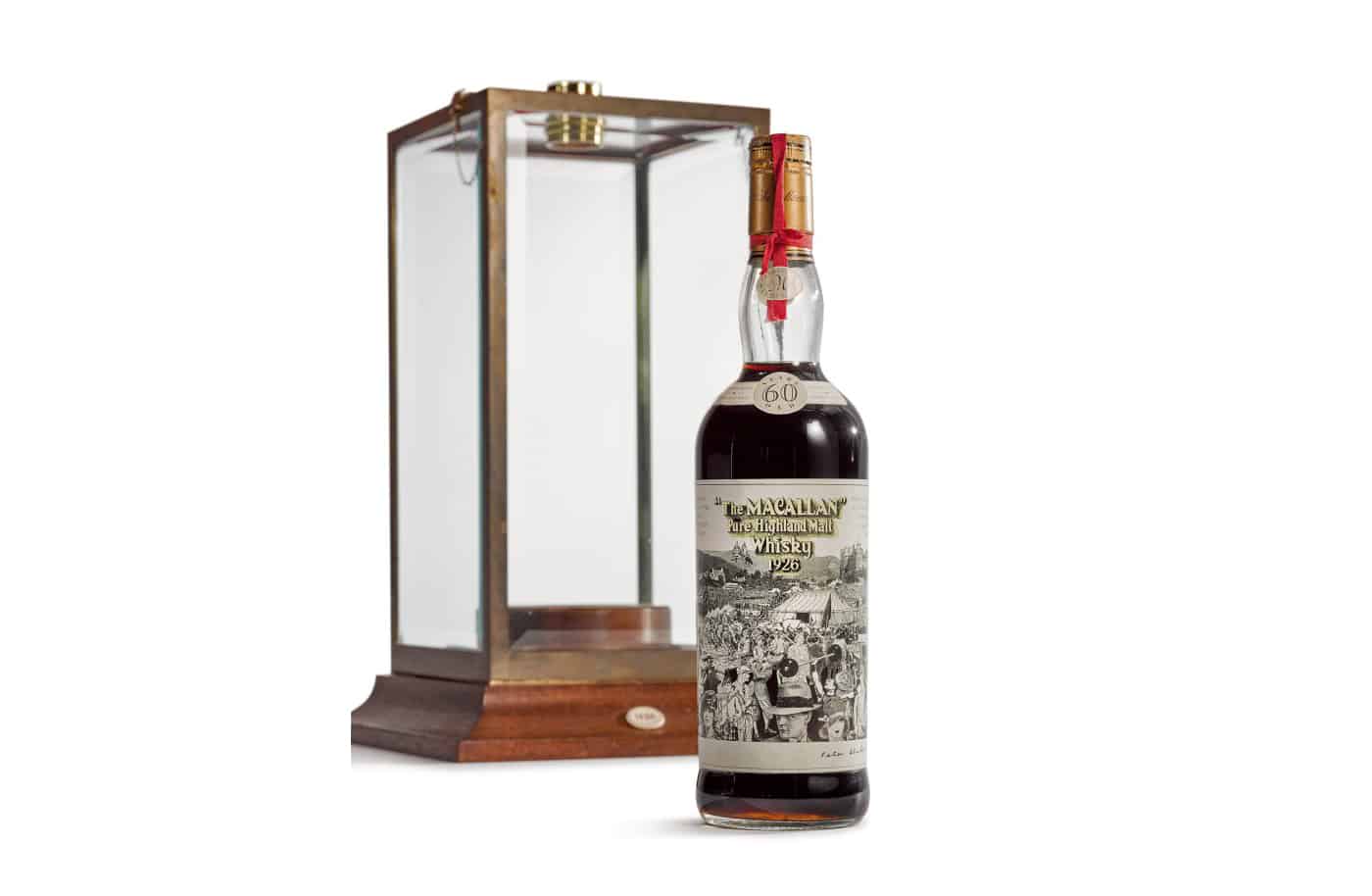 Along with the two other offerings that come from the same year, this particular bottle is also aged in casks that were seasoned with sherry. The distillery partnered with artist Peter Blake for the design of this vintage’s label.

It only released 40 bottles in total, and at last count there were only 12 bottles of this collaboration still available. The last one known sold for $1,040,000 in May 2018. 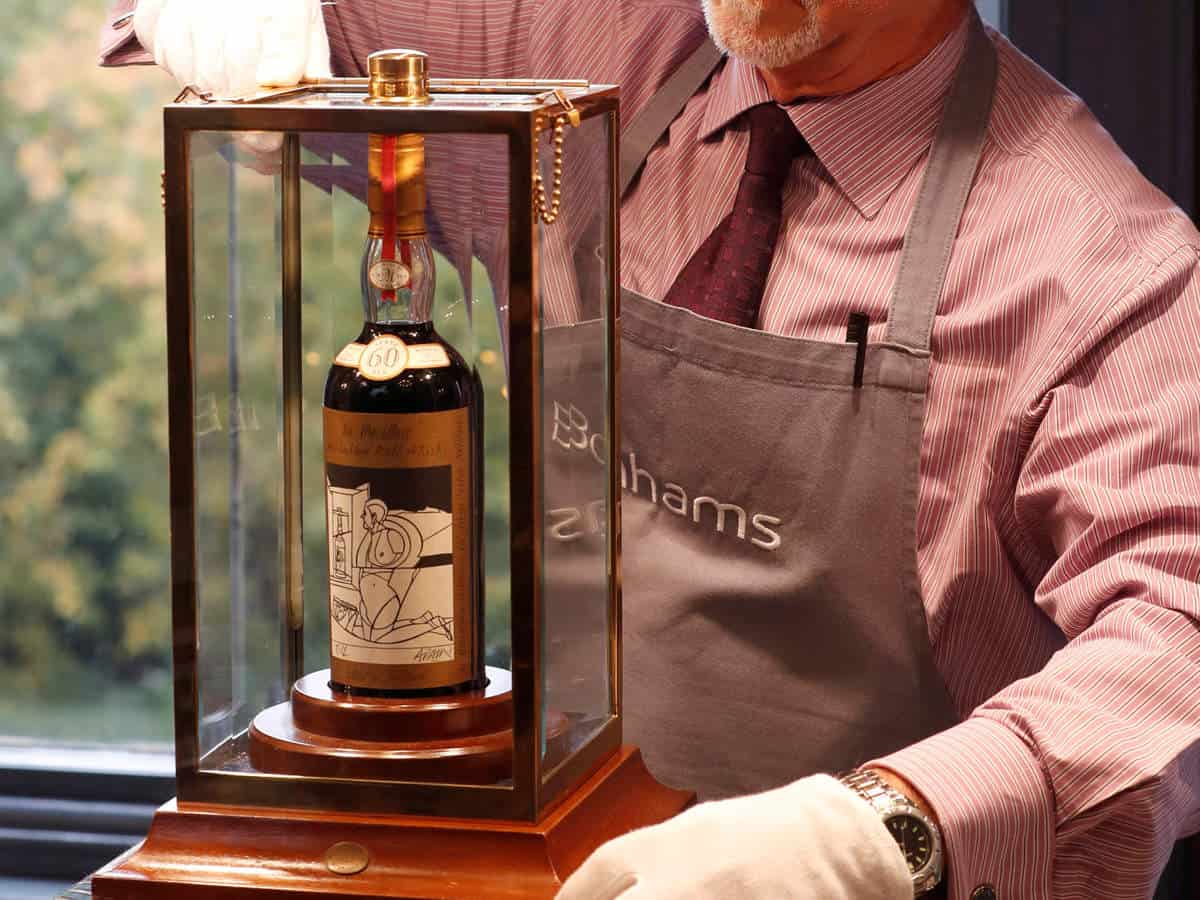 Designed and crafted by Valerio Adami, this offering only produced 12 bottles in the series. The decanter is placed in a special cabinet that is ready to be displayed. The whisky was distilled in 1926, but it was bottled in 1986.

This particular bottle was auctioned off for $1,070,000 after famous whisky collector from Colorado Richard Gooding passed away in 2020. You never know, one of them might still sprout for sale at some point in the future, so keep your eyes and ears open. 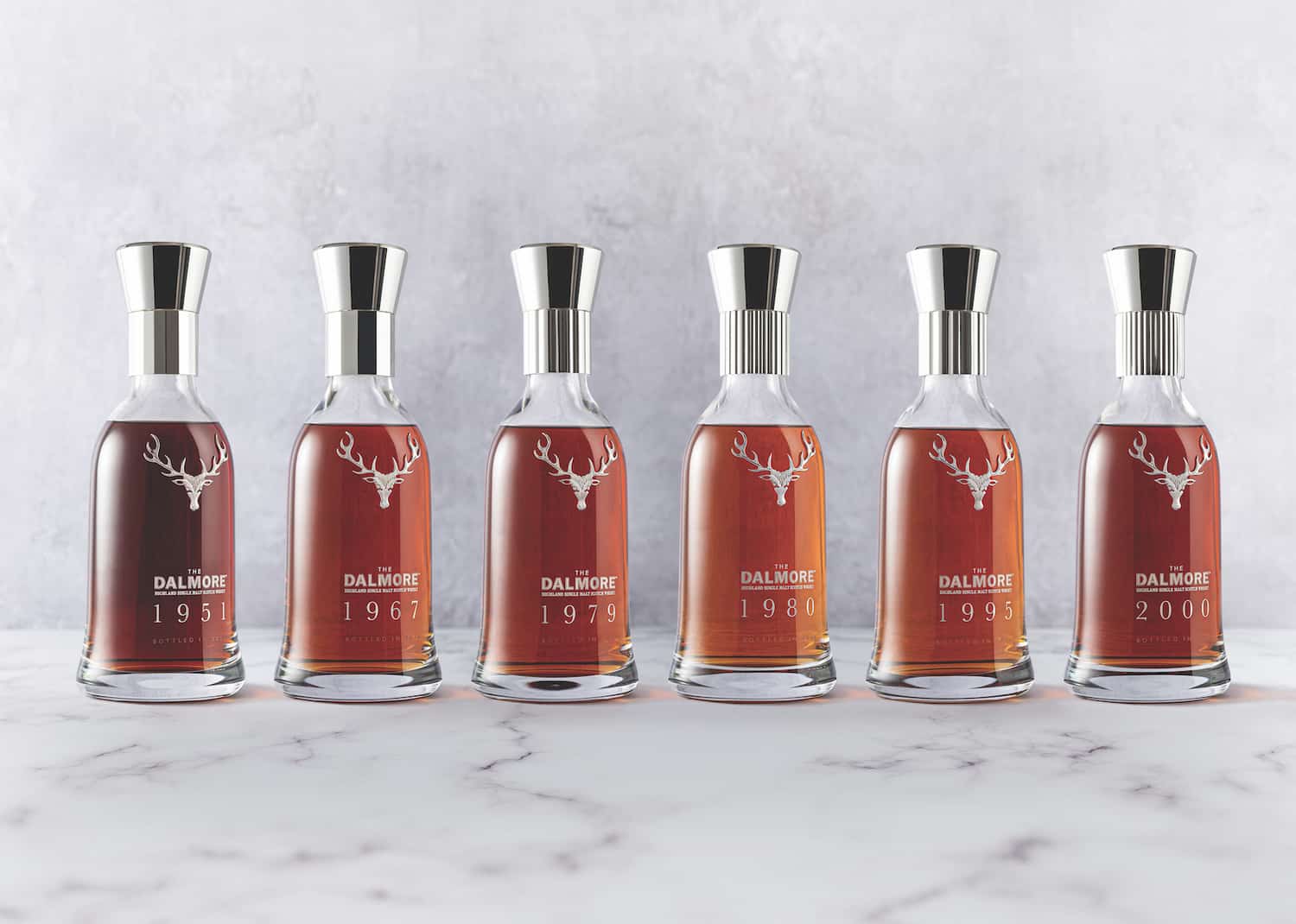 The Dalmore Decades No.6 Collection

The reason they are so pricey is that each vintage has its own significance, with the newest one bringing in the new millennium. 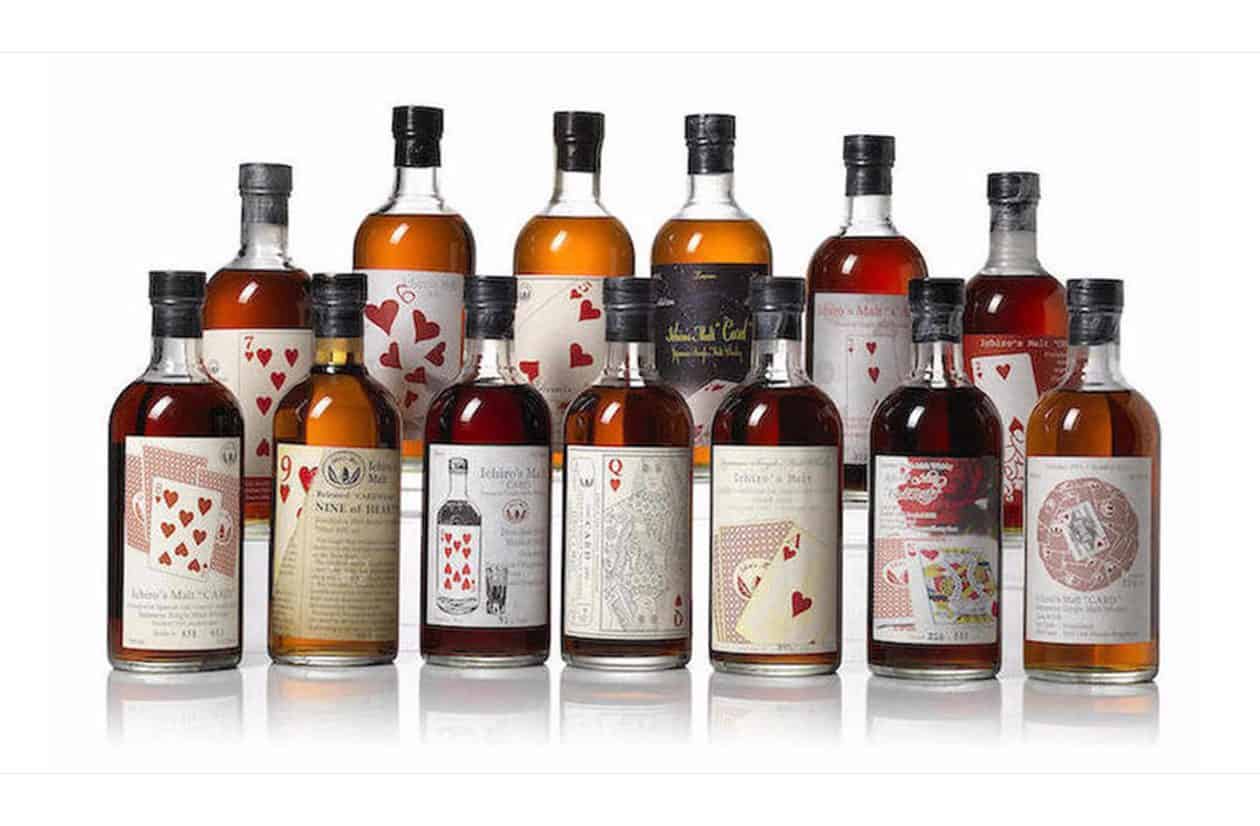 This collection features 54 bottles, each bottle representing a card in a 52 deck of cards, plus two extra ones for the jokers. The Hanyu distillery was in operation since 1941, but it stopped production in 2000.

The bottles that were distilled especially for this occasion used the 400 casks that were saved by the founder’s grandson after the distillery closed. They were released between 2005 and 2014, and the collection sold for $1,520,000. 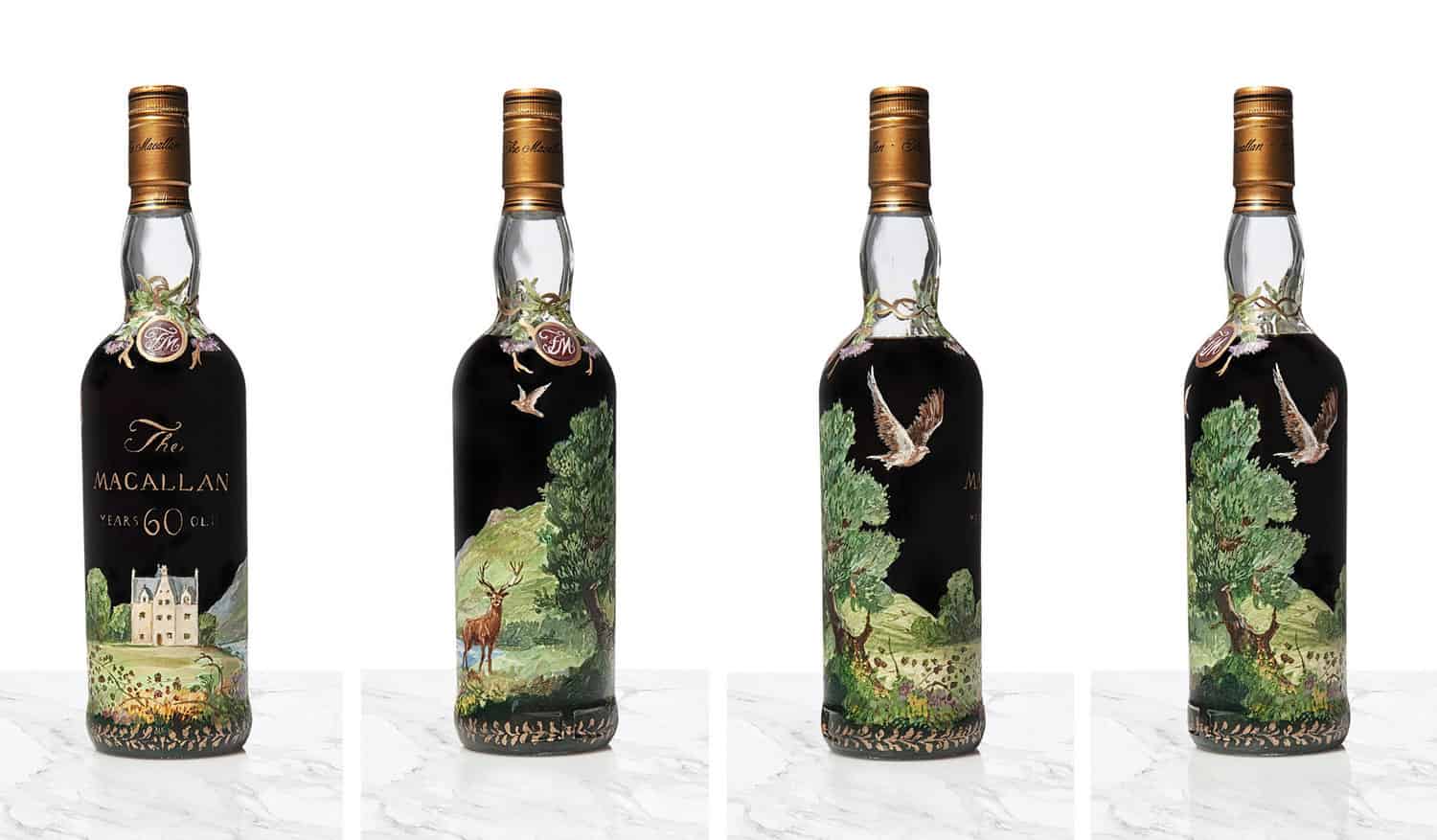 Commissioned by Fortnum & Mason and hand-painted by famous Irish painter Micahel Dillion, this bottle sold in November 2018 at a Christie’s auction for $1,530,000. Although the whisky is their greatest offering that was distilled in the famous cask no. 263, it is the original illustration that justified the price.

It depicts the Easter Elchies House, the Macallan’s Speyside estate. It is a work of art in itself, which is worth more than the whisky itself. 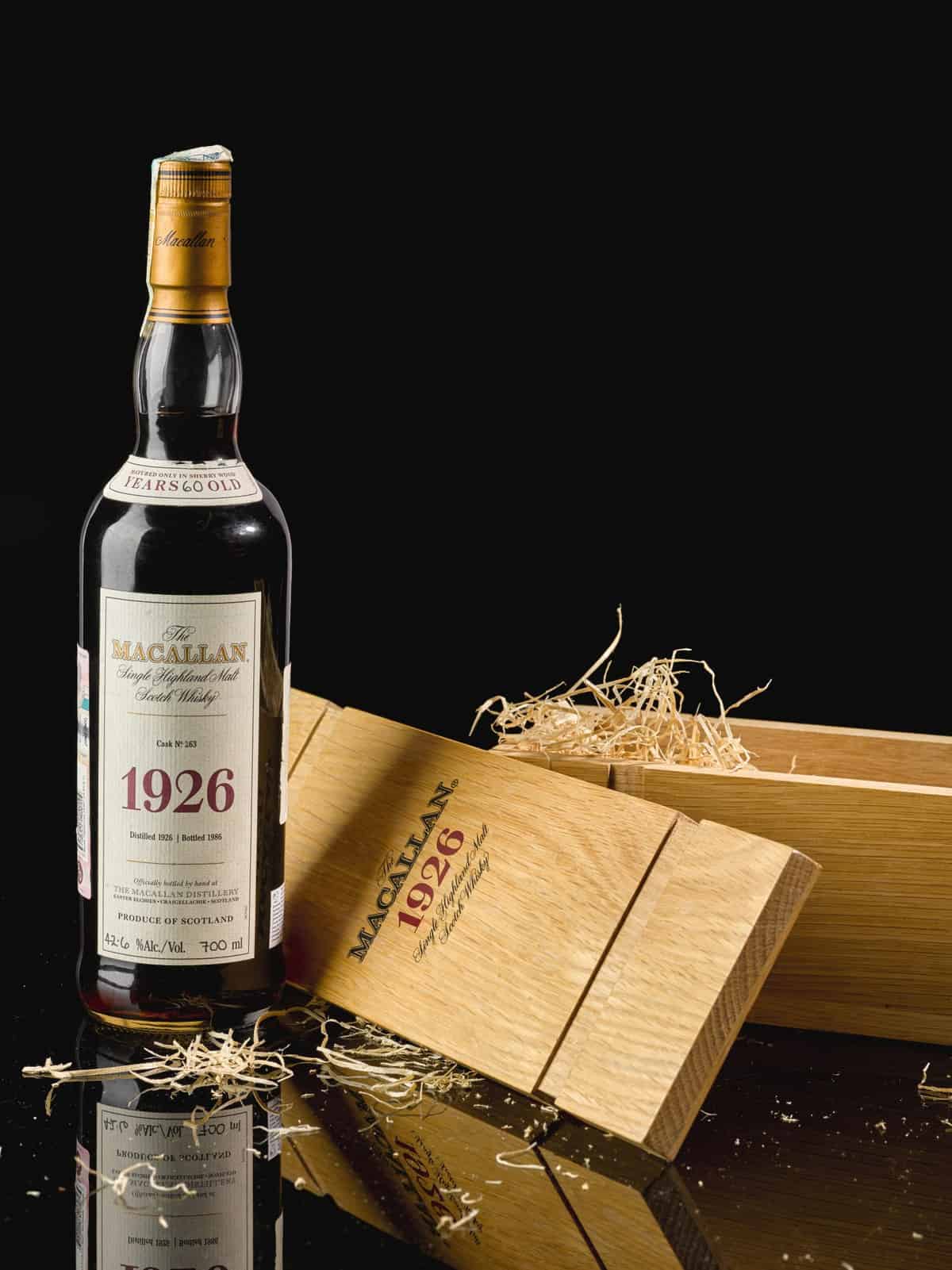 Nicknamed ‘The holy grail of whisky’, this very special bottle has a whole history behind it. Part art, part artist collaboration, part whisky, the blend of these factors justify its $1,900,000 price tag.

At the Sotheby’s auction where the sale took place, the 1926 vintage whisky was sold in its original cask no. 263. It also featured a hand-painted design by Irish artist Michael Dillon, which made this bottle so valuable. 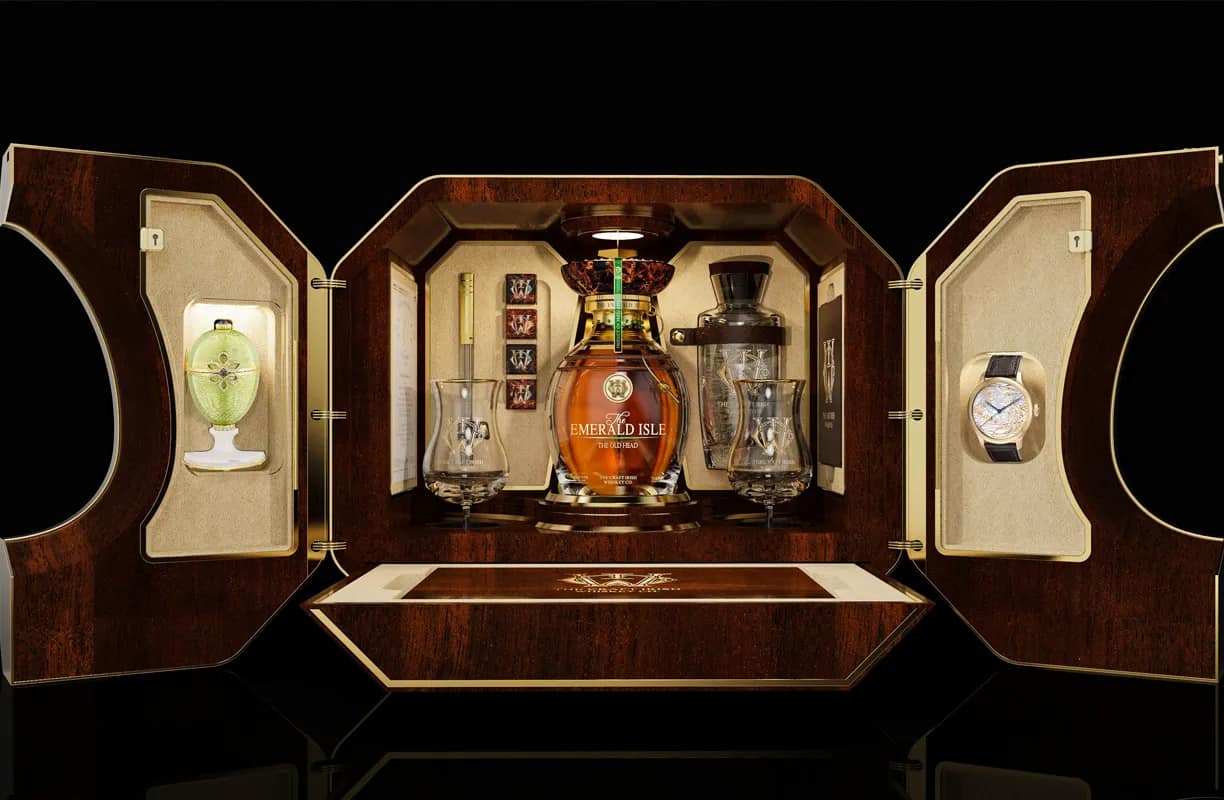 This amazing collection of the brand’s finest Irish whiskies comes in a box that contains a cigar, jewelry, and a watch, in a gorgeous box. The whiskey comes from Bushmill, an old distillery in Ireland. The spirit was distilled in Pedro Ximenez casks that were used for making dark and sweet sherry.

And one of the most precious objects that is included in the box is the Fabergé Celtic Egg. Crafted from 19-karat gold with one single emerald, the egg is the reason the collection sold for a cool $2,000,000. 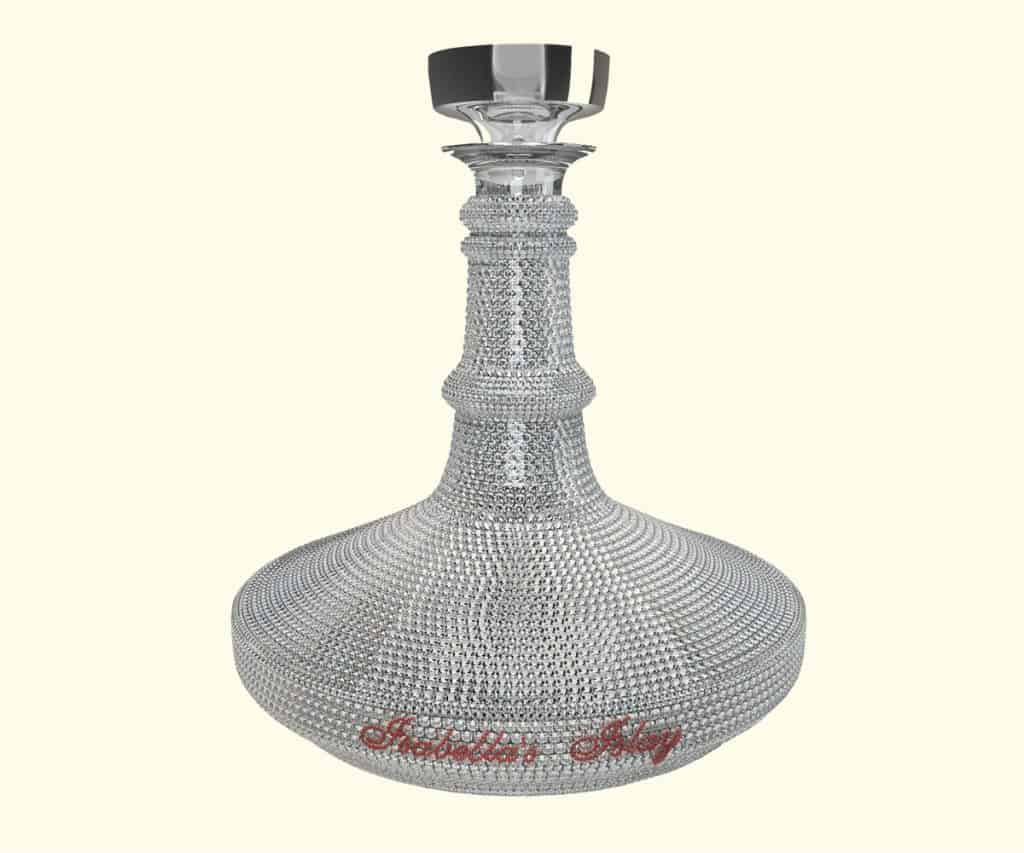 This gorgeous offering has sold for the exuberant price of $6.2 million. The decanter that is made out of 8,500 diamonds and 300 rubies played a huge role in the pricing, that’s for sure. Once the liquor is finished it can be displayed like a work of art, that’s how exquisite it is. But most likely the owner will never drink it.

The luxury whisky is from the island of Islay in Scotland, and it is worth only $200,000. That’s still bonkers, but if you can afford to spend that much money on a bottle of whisky, who are we to judge? In this case, it really is the white gold decanter that makes it so valuable.

This is a pretty impressive list, if we may so ourselves. What do you think of the 20 most expensive whiskies ever?