The Top 10 Most Expensive Air Jordans of All Time

Inspired by basketball legend Michael Jordan, Nike launched probably one of the most successful line of sneakers the world has seen so far. The Air Jordans. Since the first collection got on the shelves of sports stores back in 1985, these sneakers have become a legend in the world of sports shoes. From just another pair of sneakers, Jordans have become a symbol for many fans and even non fans of the famous player.

Without knowing, Nike and their sneakers have changed the sneaker market forever and not only that but even the way people look at basketball nowadays. While for some people, Air Jordans are nothing more than a usual – and overpriced – pair of shoes, for others they are a legacy of all those memorable moments Michael Jordan had on the court.

Beyond the fashion symbol and what they mean for the most avid of the Jordan fans, the sneakers have grown to become one of the best selling and at the same time most expensive sneakers on the market. The brand has surpassed other big industry names such as Reebok, Adidas or Converse and keeps going even today.

Many of these famous sneakers now behave like those old valuable classic cars. The older they get, the higher their price and demand. And believe us, there are a lot of people who want to get their hands on a historic pair of Air Jordans. And they’re ready to drop tens of thousands of dollars for them.

Speaking of the price, let’s find out which are the top 10 most expensive Air Jordans: 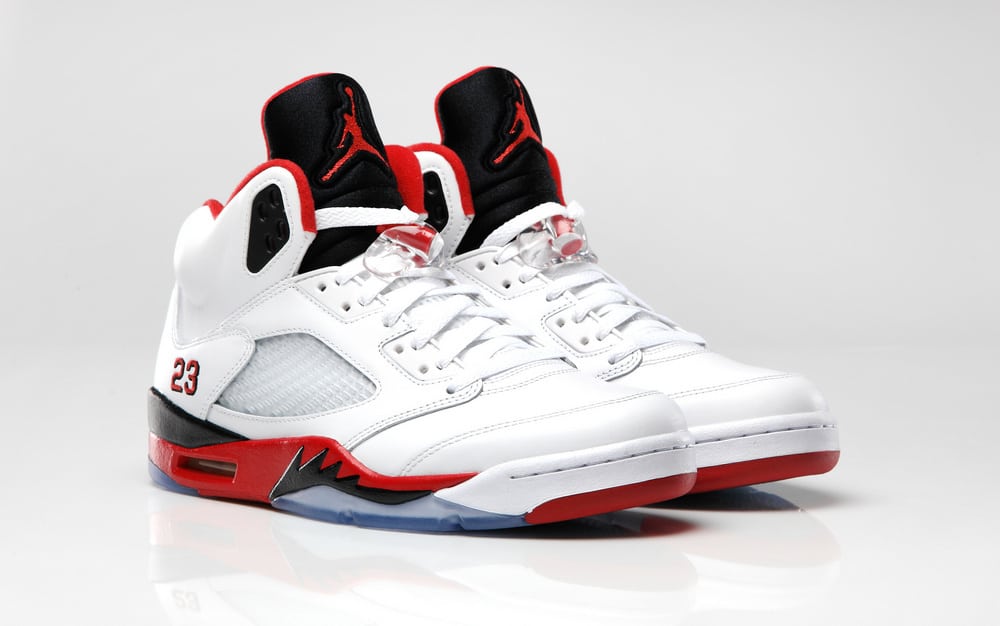 The fifth signature sneakers of Michael Jordan hit the shelves of the stores in 1990 and were designed by Tinker Hatfield, inspired by the infamous shark-teeth decals painted on many war planes of the World War II.

While they kept the mesh side panels of the Air Jordan IV, the fifth model included new features such as lace locks and translucent sole. At first, the sneakers had the Nike Air signature on them, but that was eventually replaced by the famous Jumpman logo. Michael Jordan got himself a custom made pair, with number 23 on them. They were sold for a good $10,000. 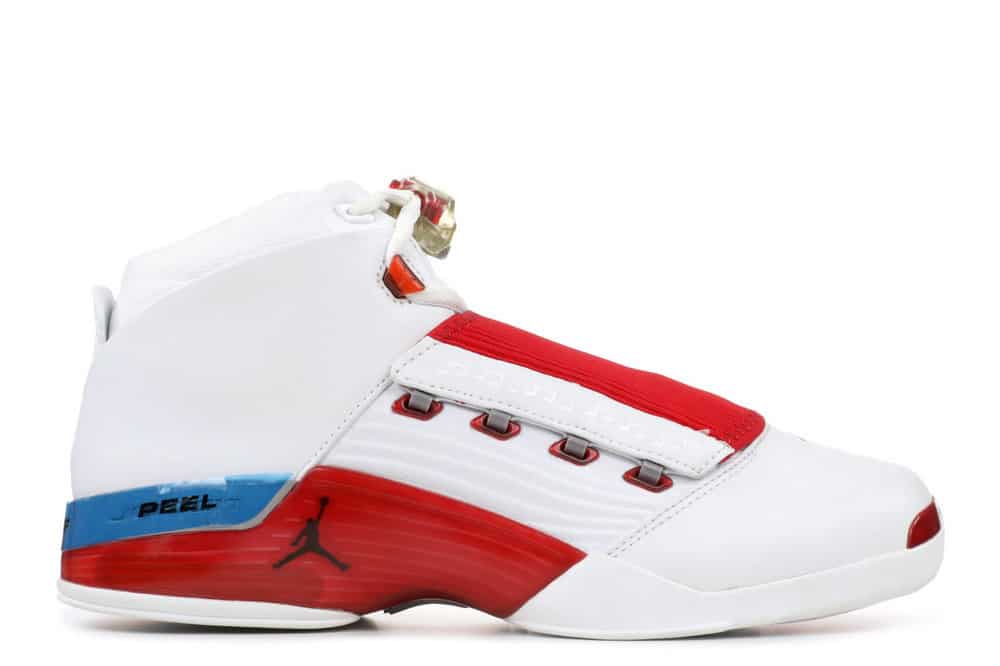 The Air Jordan XVII takes on a more sophisticated design of the world renowned sneaker. Released in 2002, they marked the return of the basketball legend to the field, after a short retirement. Michael Jordan wore them while playing for the Washington Wizards.

Inspired by jazz music and Aston Martin cars, with a removable strap covering almost half of the shoe, hidden quick lace system with lace locks and a very smooth feel to them, the Air Jordans XVII were the most high priced Jordans back then. Coming in a sleek looking metal case, they sure made waves at the time. They were sold for a stunning $11,267. 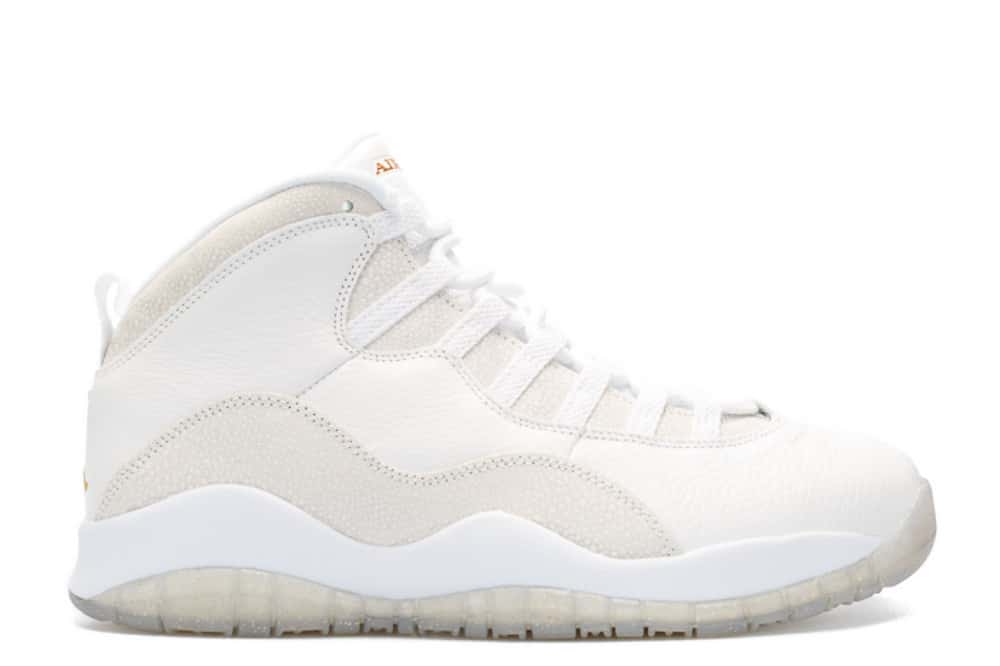 Air Jordan 10 OVO is a rare sight. The special model was given to Drake and his group as a gift for their partnership with the Jordan Brand. They feature the gold OVO owl logo of Drake’s clothing line (October’s Very Own) and the iconic red jumpman.

The gift was made during the Toronto Raptor’s event Drake Night, where a fan got lucky and became the owner of one of these pairs. Not missing on the opportunity, he then put the pair on sale for a whooping $20,000, making them one of the most expensive Air Jordans ever. 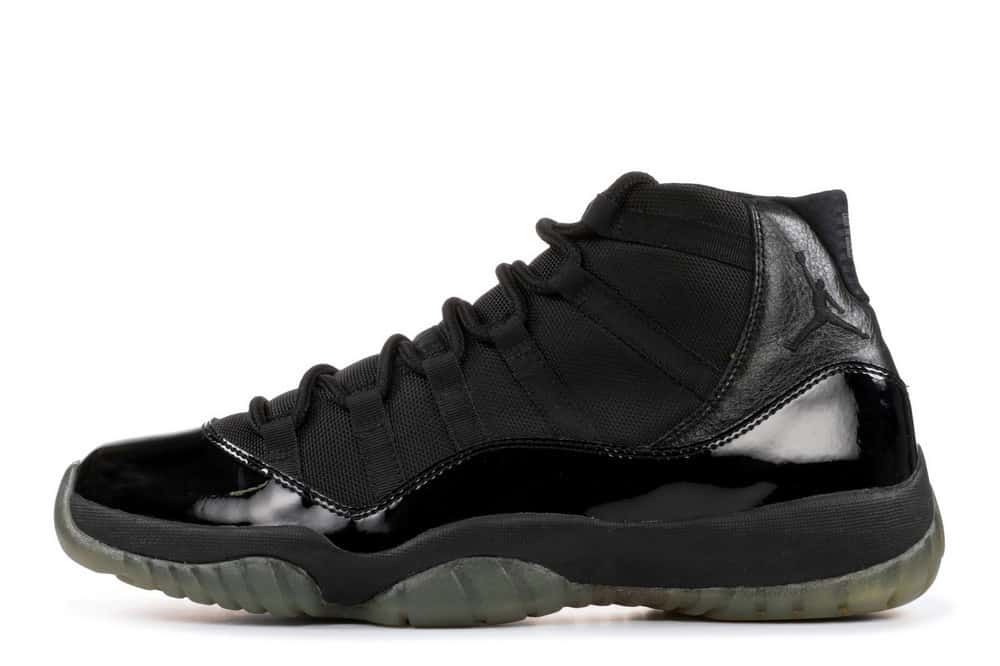 One of the most sought after pair of Jordans are the Air Jordan 11, Blackout edition. They became so popular that their price soared to a whooping $21,780. The amazing thing about them is that they’re clad in Nike patented leather and carbon, making them a perfect wear on both the basketball court and at formal events.

Michael Jordan wore them during the filming of the movie Space Jam and during an NBA championship, and since their popularity reached the skies, Nike created retro editions as well. 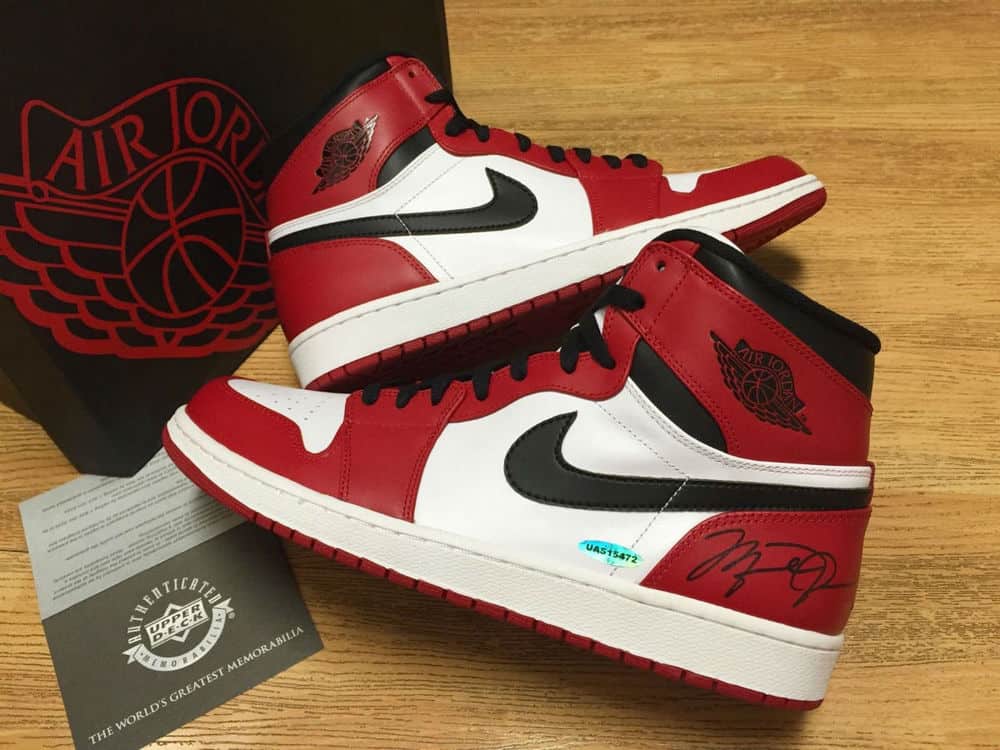 One of the most craved pair of basketball sneakers ever produced is this timeless pair of Air Jordan I with the autograph of the basketball legend on them. Add to that the memories, the heritage they carry and you’ll understand why their status and price rise so high.

The color scheme was inspired by the Chicago Bulls theme, and the fans loved it so much that Nike decided to make two retro releases, one in 2013 and another in 2015. This coveted pair of Jordans got to the astonishing price of $25,000. 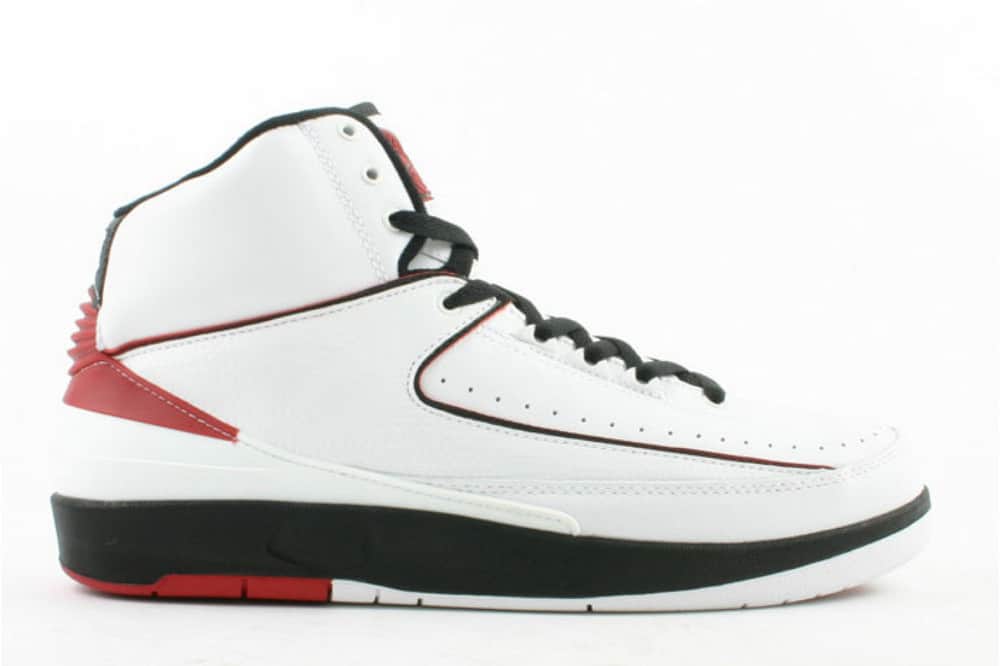 While not the most popular model out there, without impressing fans and sneaker collectors around the world, the Air Jordan 2 OG somehow still got sold on ebay for the hefty sum of $31,000.

Designed by Bruce Kilgore and produced in Italy, the model came in two color schemes. The pair that was sold on ebay was 28 years old and not in a too good condition but with the potential to become a museum piece. 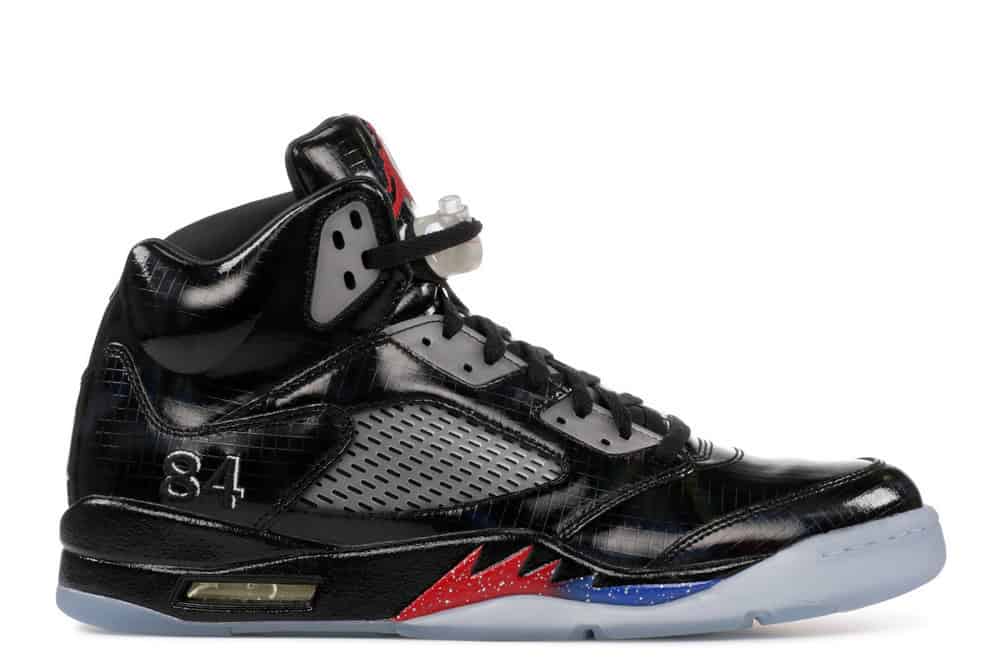 It’s well known the fact that celebrities rise the price of the items just by wearing them and that’s exactly what happened when Mark Wahlberg got to try on the Air Jordan 5 Retro Transformers Sample. Featuring an Optimus Prime logo on the sole and patented black leather, the unique pair was a gift from the Jordan Brand to the famous actor in celebration of the first Transformers film release.

The number 23 was replaced by 84, the debut year of the original Transformers television series. Mark eventually put them on sale online for a good $52,900. 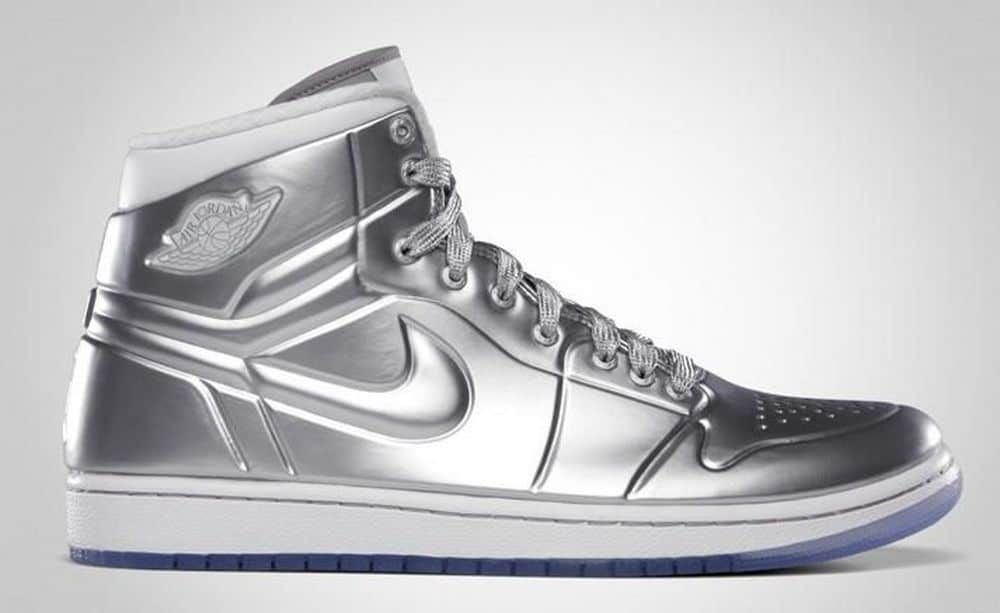 A gift from his wife on his 32nd birthday, this pair of Air Jordan Silver Shoe complete with Michael Jordan’s autograph is one of the most rich in history and valuable pair of sneakers, worth a lot to collectors and fans alike.

Made from sterling silver in a limited edition of only 10 pairs, all of them are now owned by avid collectors. This autographed pair was sold at an auction for a whooping $60,000. 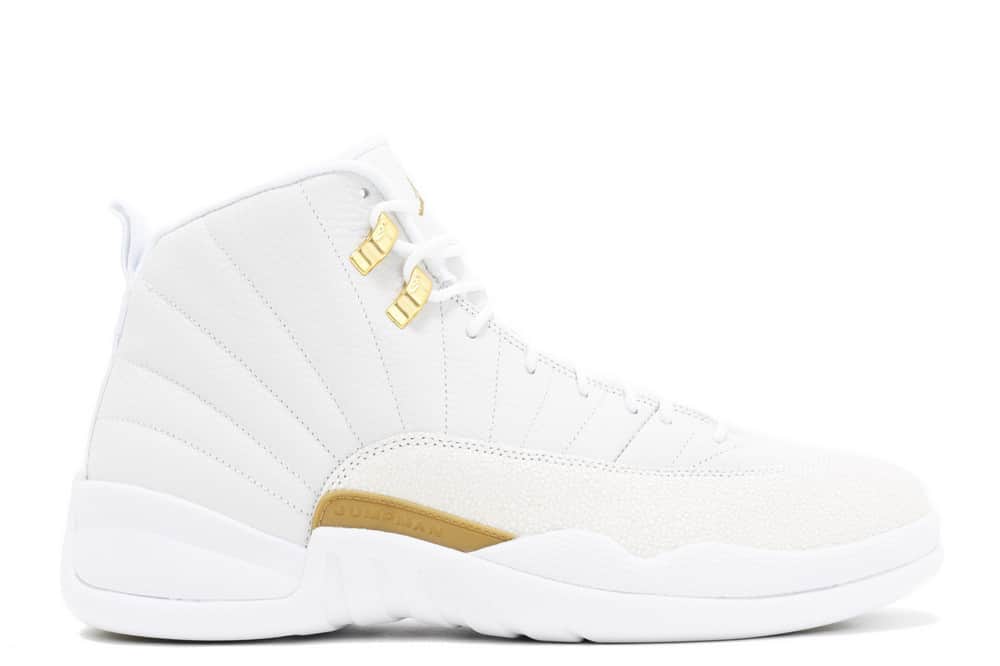 With the same branding partnership as the Air Jordan 10 OVO, the Air Jordan 12 OVO shares a similar story to the model at number 8 on our list. It happened at the same Toronto Raptors event, Drake’s Extravaganza Night. A lady fan received the sneakers as a gift and she did exactly what most of us would have probably done. Sold them. For an incredible $100,000.

Sweet, right? Unlike their predecessors, the Air Jordan 12 OVO’s were released to the public as a copy of Drake’s pair received as a gift, but on white Stingray leather with a translucent sole and a touch of gold on the sides. 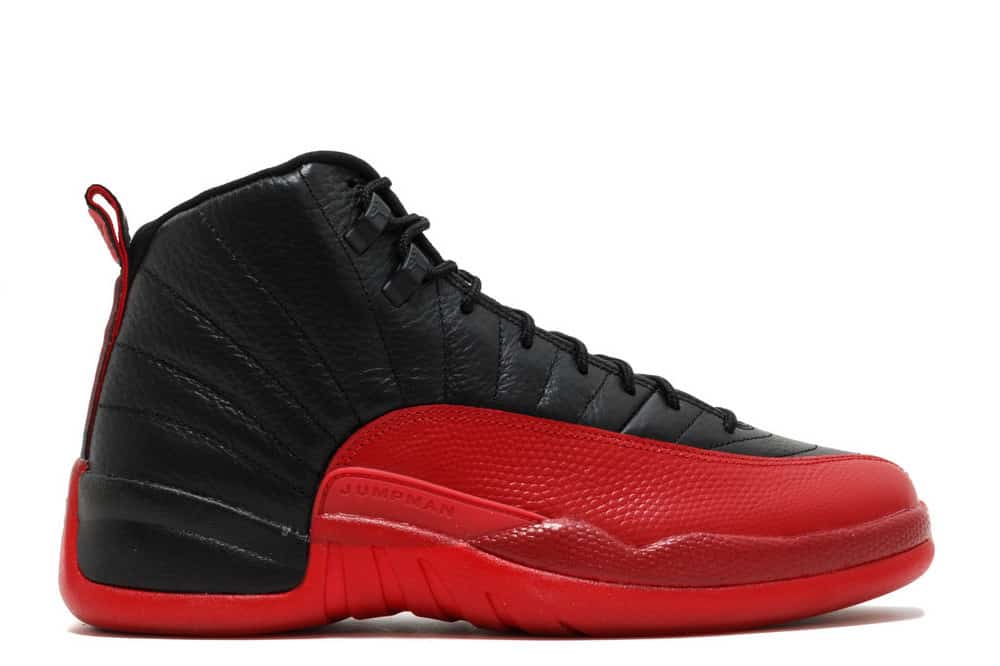 While not their original name, this pair of Air Jordan 12 is remembered by the story behind. It was the 1997 NBA Finals and Chicago Bulls was playing against Utah Jazz, with Bulls in trouble and the latter closing in to the victory. Michael Jordan was having flu symptoms and wasn’t feeling too well, but he found the strength to lead his team to victory that night, scoring 15 points and making for a memorable game.

The pair of Air Jordan 12 he was wearing that night became known as the Flu Game, a black and red edition of the original, which ended up sold for an unbelievable $104,000, making them the most expensive Air Jordans ever sold.