The 10 Most Expensive Handbag Brands in the World 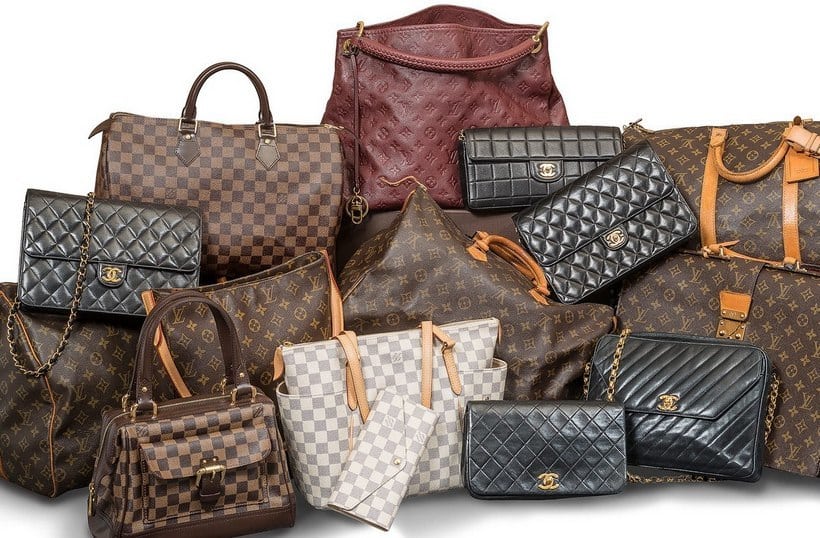 Handbags, purses, clutches, totes, or whatever you may call them, these fashion items are essential for every single woman out there. They come in various shapes, sizes, styles and colors, and there are so many brands from all over the world making handbags that it’s incredibly hard to pick just one favorite.

Some handbags are designed for high-end fashion and status, while others are simply created for everyday use and to complement the urban chic. But a special occasion always requires a special handbag, and today we’ll take a look at some of the world’s most expensive handbag brands. 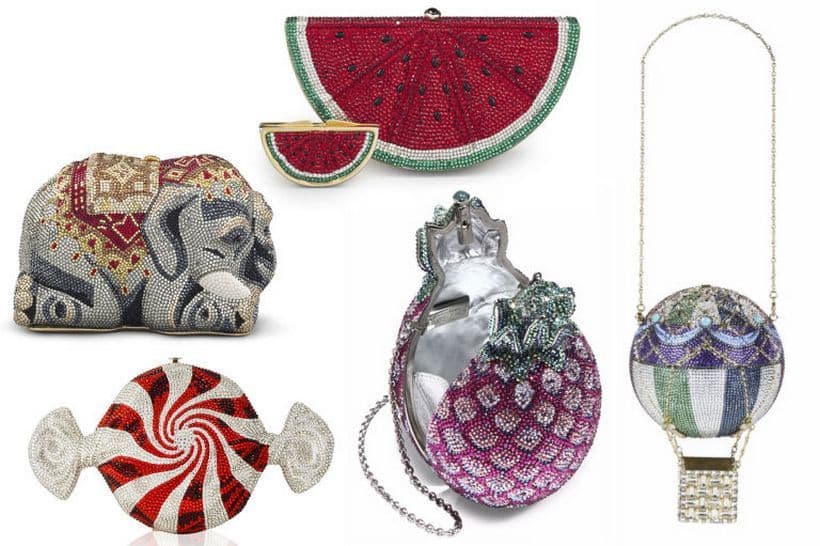 The renowned Hungarian-born American designer started her company back in 1963 and quickly gained the attention and appreciation of the entire world with her unique creations. Judith Leiber became well known for her minaudieres, lovely little handbags, with innovative shapes, decorated with more precious gems than you can count.

As you probably expect, these handbags are really expensive, and the Precious Rose bag, for example, is one of the band’s most exquisite designs, with 42 carats worth of diamonds, sapphires and other precious stones, which set its price at $90,000. Judith Leiber’s cupcake minaudiere was even featured in the Sex and the City movie, making her popularity rise even more. 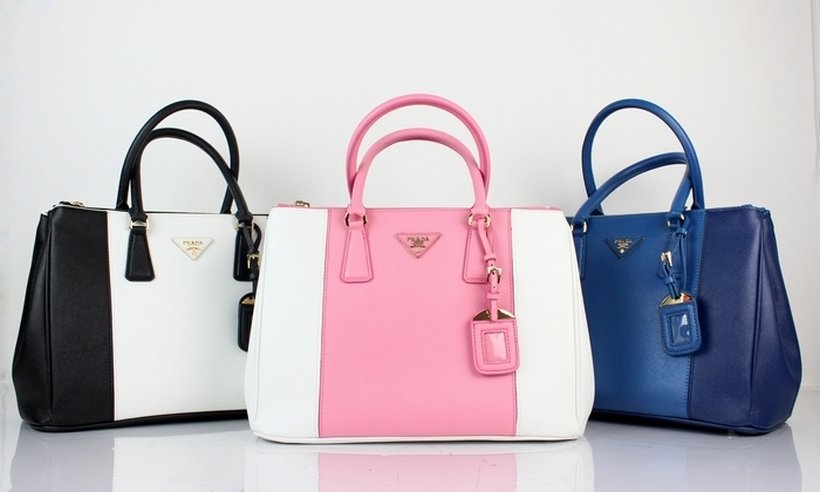 The iconic Italian fashion brand has been rocking this world with amazing creations, ever since it was launched by Mario Prada, back in 1913. To this day, Prada has always been one of the most sought after luxury labels, not only for their handbags, but also for the stylish clothes, wonderful perfumes and apparel they launch.

The thing that makes their items so appreciated is the originality of their designs and when you see a Prada signature you can be certain that the materials chosen are always top notch. 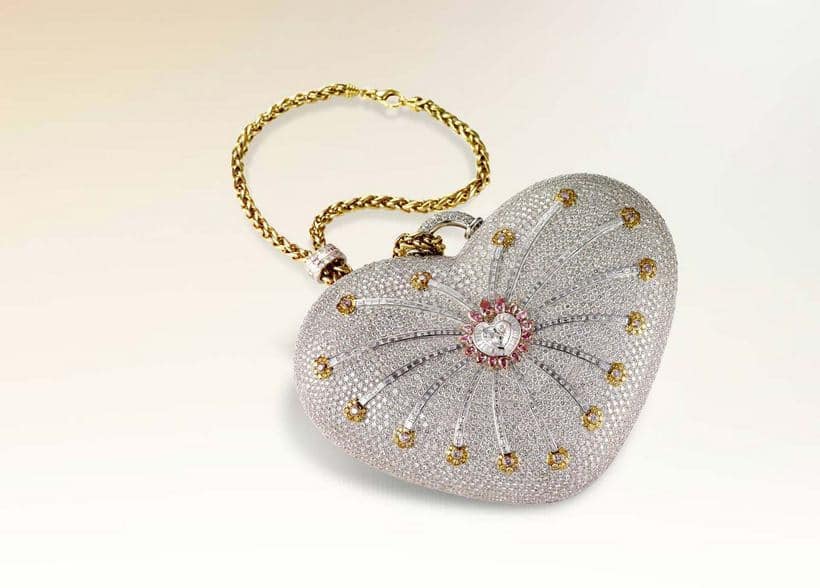 Although this Swiss and Emirati luxury goods company is mainly focused on jewelry and timepieces, they also make other items that awe us with their beauty, such as this 1001 Nights Diamond Purse before you. Made of 18 carat gold and encrusted with no less than 4,500 diamonds, this staggering handbag entered the Guinness Book of World Records in 2010 for being the world’s most valuable purse, at the price of $3.8 million.

The company’s founder was David Mouawad, who opened this label back in 1890. Mouawad holds several other entries into the Guinness Book of World Records for the most valuable necklace, the most expensive lingerie and their pear-shaped diamond called the Mouawad Splendor. 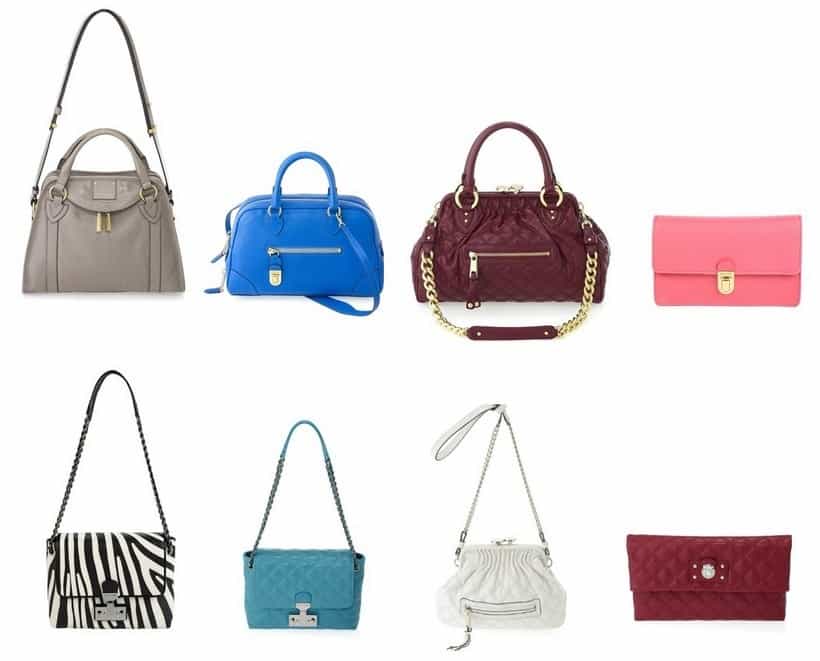 The renowned American designer Marc Jacobs has been the creative director at Louis Vuitton for almost 17 years, before starting his own line of accessories. He’s now considered one of the most important fashion designers in the entire world, with over 200 retail stores in more than 80 countries, opened for this bespoke creations.

One of the most beloved handbags imagined by Marc Jacobs is a beauty called Carolyn Crocodile, which is made with purple crocodile skin and can be bought for the cool price of $50,000. 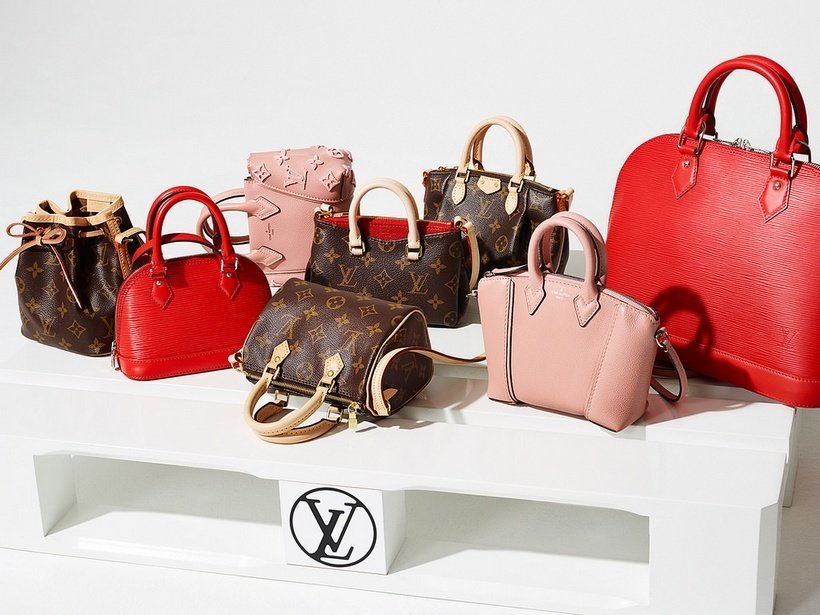 The iconic French fashion house has dominated the entire fashion world since 1854, with the LV monogram quickly becoming a symbol of luxury and fine taste. Louis Vuitton stands for many different things nowadays, but their exquisite leather goods made this label the world’s most valuable brand in the luxury business for six years in a row.

Their secret? Louis Vuitton always reinvents itself, with innovative designs such as the New Age Traveller handbags, which combines phone cables with leather and sells at the price of $26,000.

The most expensive handbag created by them is entitled the LV Tribute Patchwork Bag, released in 2007 and produced in a limited run of just 24 pieces. This bag was highly sought after though some critics named it one of the ugliest bags ever made. If Beyonce and Rihanna each have one they shouldn’t be that bad, right? 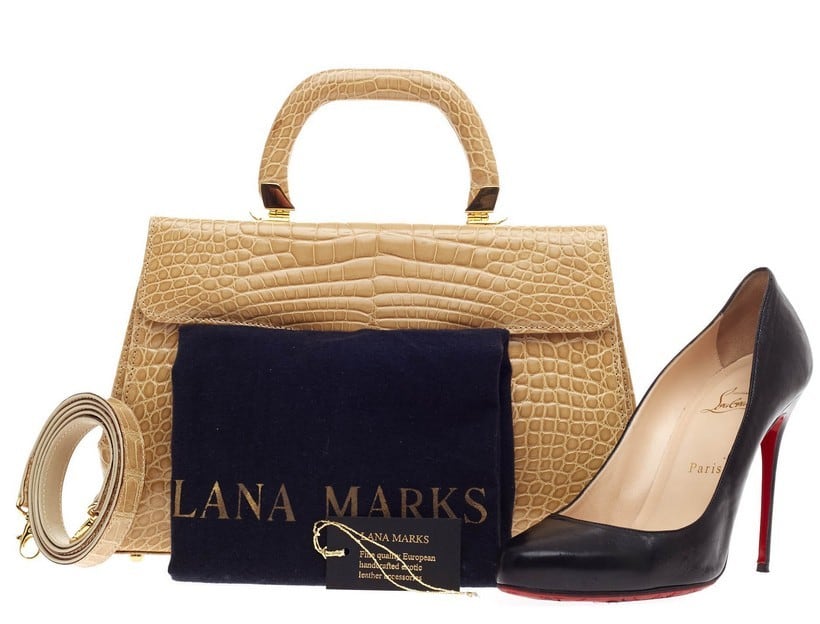 The South African fashion designer made a name for herself with the exotic leather accessories made from alligator, crocodile, lizard or even ostrich skin, with a large variety of models that brought a lot of celebrities into her store. Her precious handbags are often seen on the red carpet of the Academy Awards and one of the most impressive items is the Lana Marks Cleopatra Clutch, which was inspired by the actress Elizabeth Taylor and it’s now worth over $100,000.

These brand’s most luxurious pieces feature 1,500 black and white diamonds, set in 18 carat white gold and were manufactured with the aid of five artisans. Stars like Charlize Theron or Helen Mirren have been seen wearing Lana Marks creations when they’ve accepted their awards. 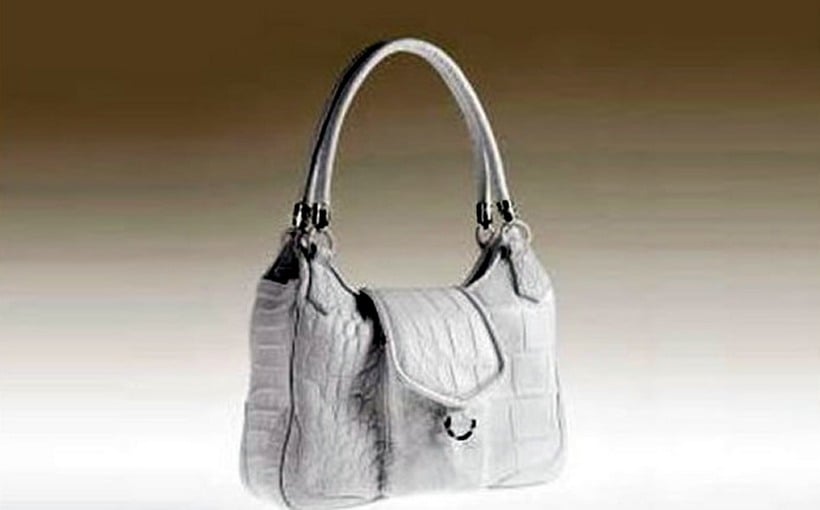 The acclaimed Norwegian designer created handbags that were highly appreciated in Italy, ever since they were launched, back in 2001. It didn’t take long for her to stand out, with each handbag being carefully created, with an attention to details that’s seen on the price tag, since most of them are seen only in high-end stores. The bags are created in Italy as a stand against cheap labor and exploitation.

From the long list of items created by Palladino, the Gadino Limited Edition Bag is one of her most impressive bags, made of white crocodile skin and adorned with 39 diamonds on the clasps with white gold. It costs $38,000 and it’s among the most expensive bags in the world, but Hilde Palladino stated that the edition is limited and will not be produced again, so it’s going to become a true collector’s item. 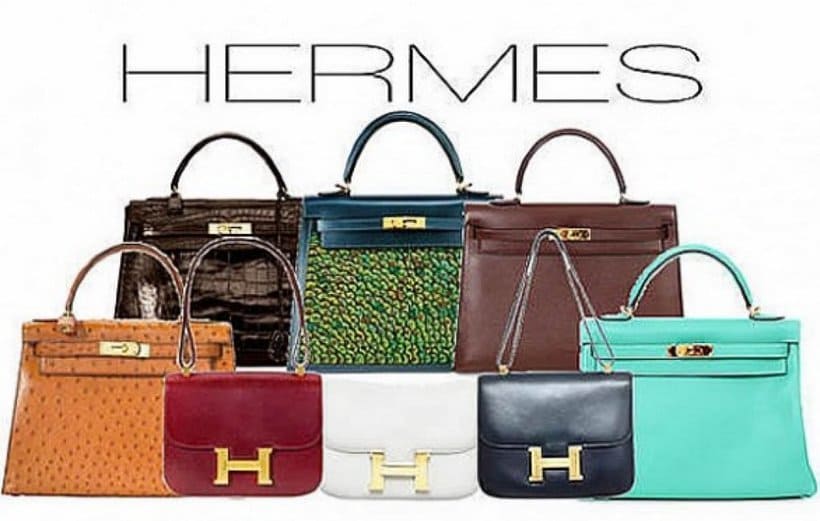 Founded back in 1837, Hermes of Paris has been one of the world’s most famous luxury goods company, specializing in leather goodies, breathtaking perfumes, jewellery, watches and even home furnishings right now. The handbags designed by Hermes are made in a whole day, using only premium leathers, taken from all over the globe.

Among the most famous bags made by Hermes, we should mention the Kelly bag, which was originally a saddle holder, redesigned and popularized by the actress and Princess Grace Kelly. Another iconic creation of the brand is the Birkin handbag, named after the famous actress Jane Birkin and created with her aid. Some of the Hermes Bikin handbags are instant collectibles, are they usually end up selling at auction houses for over $100,000. 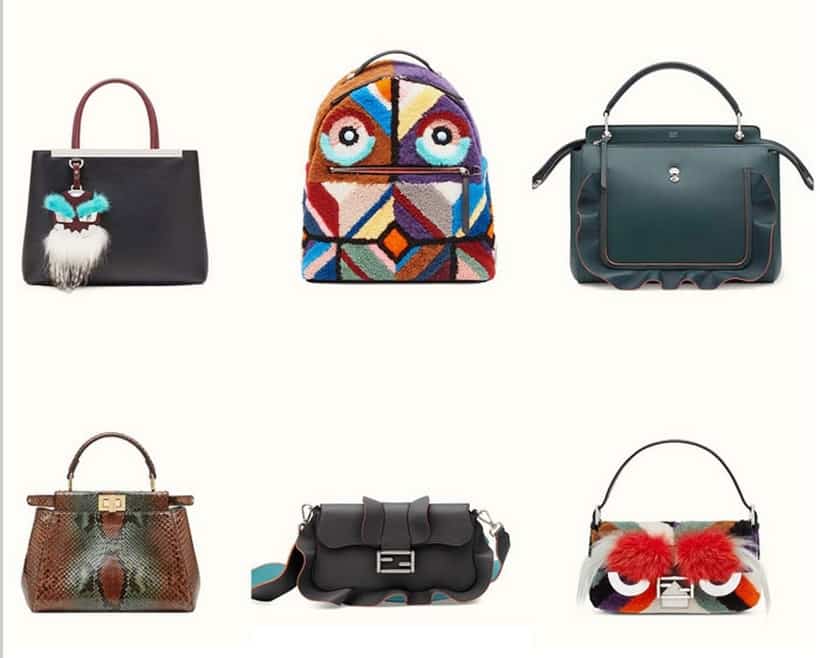 Another iconic name in the fashion industry and especially in the world of handbags is Fendi, the Italian luxury goods fashion brand founded in 1925, and renowned for its eye catching accessories, usually made with stylish additions of fur.

The brand’s incredible “baguette” handbags are just perfect if you want to stand out in any occasion. They come in a variety of designs and sizes, and they’re made of bespoke materials like white lambskin or black crocodile leather, which makes them quite exclusive at a price ranging around $28,000. 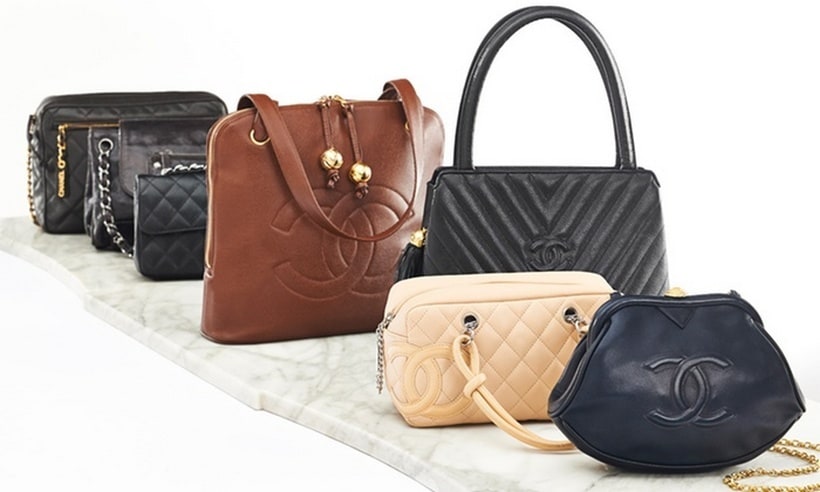 Last but not least, Chanel is the world’s most expensive handbag brand right now. Founded in 1909, the company has celebrated a century of incredible creations and popularity just a couple of years ago, with no sign of slowing down. Everyone knows the name of the brand due to Chanel’s flawless approach to elegance, without pushing towards any extreme.s

Their perfumes are highly appreciated and their stylish ready-to-wear clothes, amazing luxury goods and fashion accessories are always a real treat for our eyes. The handbags from Chanel are usually higher priced than anything else, but they’re extremely popular among celebrities, due to their chic and classic aesthetic, that’s subtle and simply beautiful.

Tags:
Previous Article
Staying At The Lodhi Might be The Experience Of A Lifetime
Next Article
The ERA 80 Concept Will Rule The Seas Of The Future