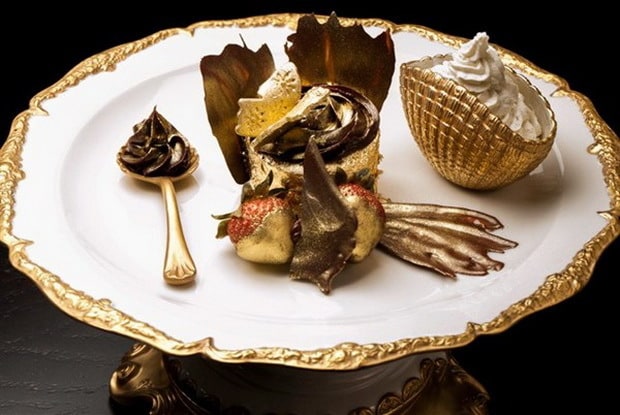 An extremely high price for just one dish – $28,000 for a meal, so exclusive that it will only be tasted by the most reputable people in the world – the Golden Phoenix Cupcake is worth only $1,007 from the aforementioned sum, the rest signifying the value of the 24-carat gold plated tea trolley the dish comes with. It is beyond any doubt the most expensive eatable cupcake ever cooked.

This extraordinarily exquisite Golden Phoenix dish was cooked as a celebration to the launch of the Bloomsbury flagship at the Dubai Mall. It is, unlike other cakes baked so far, containing inedible diamonds, fully digestible by the organism, consisting of the finest Italian chocolate and Ugandan vanilla pods smothered in edible gold flakes. It is served with a golden spoon, to match its value and style, and deliciously topped with chocolate icing and strawberries dipped in edible gold as well.

One of Bloomsbury’s spokesman declared about the reasons behind the creation of such a dish: “We have seen people attempt the most expensive cupcakes before. However, those cupcakes are not edible as they are incrusted with diamonds and other components.” He later added: “This is why we decided that we would take the realistic approach and present the most expensive ‘edible’ cupcake in the world using the real meaning of the words ‘Let them eat Cake’.”

We’re not that curious about its taste though, but we’re wondering who’re going to be the lucky ones to taste it.

Making of The Golden Phoenix