6 Awe-Inspiring Places That Will Convince You to Visit Meteora, Greece

One of the largest and most important complex of Greek Orthodox monasteries in the country, second in importance after Mount Athos, the Meteora complex – Meteora means ‘in the heavens above’ – stands out with its serene beauty.

The six monasteries of the complex are built on natural sandstone rock pillars right next to the town of Kalambaka, a unique region included on the UNESCO World Heritage List and one to attract a lot of tourists and pilgrims every year. Each of the monasteries have less than 10 inhabitants, four of them with men and only two for women. Vestiges of the Middle Ages, the high placed settlements offer a breathtaking view of the surrounding area, while at the same time having the power to bring new insights into the monastic life.

The history of Meteora goes a lot further back in time, with traces of habitation since 50,000 years ago found in the caves around the complex. In one such cavern, the Theopetra Cave, there is a structure built 23,000 years ago. During the 9th century AD, hermit monks started to inhabit the sheer cliffs and peaks since they provided a shelter from the curious eyes of the passers-by so they could pray in peace.

While the time when the first monasteries were built in the area couldn’t be traced exactly, sources state that at the end of the 11th century there was a monastic state formed around the church of Theotokos, church that can still be seen today. The Meteron monastery on the Broad Rock was founded by Athanasios Koinovitis between 1356 and 1372 as a retreat from the political turmoil of the period.

The rising threat of the Turkish raids during the 14th century led to the monks retreating on the rock pillars where they built a total of 20 monasteries, out of which only 6 still stand today.

So let’s take a look at The Six Meteora Monasteries You Have to Visit: 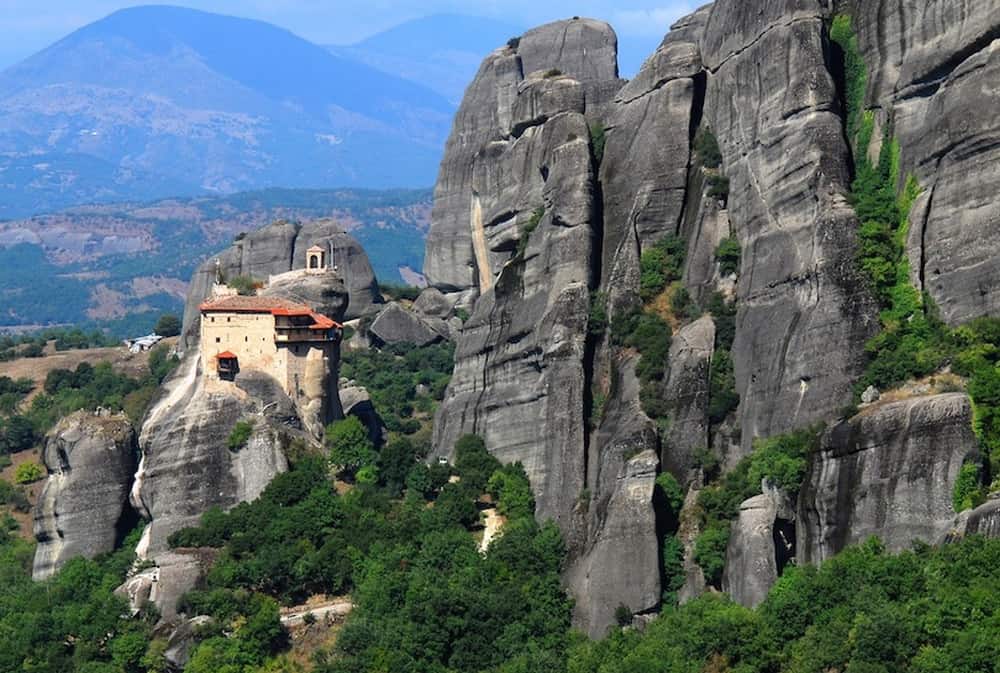 Built in the 16th century, the St. Nicholas Anapausas Monastery has a small church painted by Theophanis Strelitzas from Crete in 1527 and due to its reduced size, it’s often overlooked in most tours visiting Meteora. The frescoes are some of the best in the complex, showing skillful representations of biblical scenes and a few insights into the monastic life of the 16th century. The monastery is easily accessible via a total of 150 steps which start at the base of the peak next to the road from Kastraki. 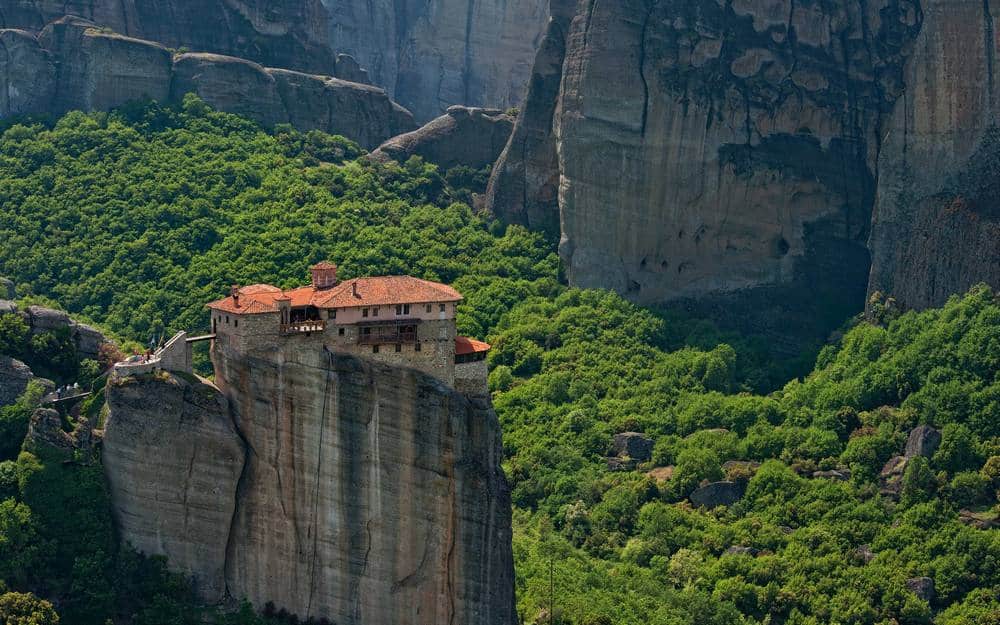 Dedicated to St. Barbara and ‘The Transfiguration’, the Rousanou Monastery, was built in the middle of the 16th century, below the other major monasteries. The interior of this monastery is an elaborate one, with decorations dating from 1560, the Katholikon and reception halls located on the ground floor, while the ‘archontariki’, the cells and subsidiary rooms are spread out on the first floor and basement.

The monastery looks very impressive from the outside, stretching over the peaks and rocks like it’s a natural continuation to them. In 1988, the monastery became a nunnery. Despite the frescoes depicting shocking scenes from the lives of the martyrs, the picturesque setting of the monastery and the friendly welcoming nuns make for a tranquil ambiance. 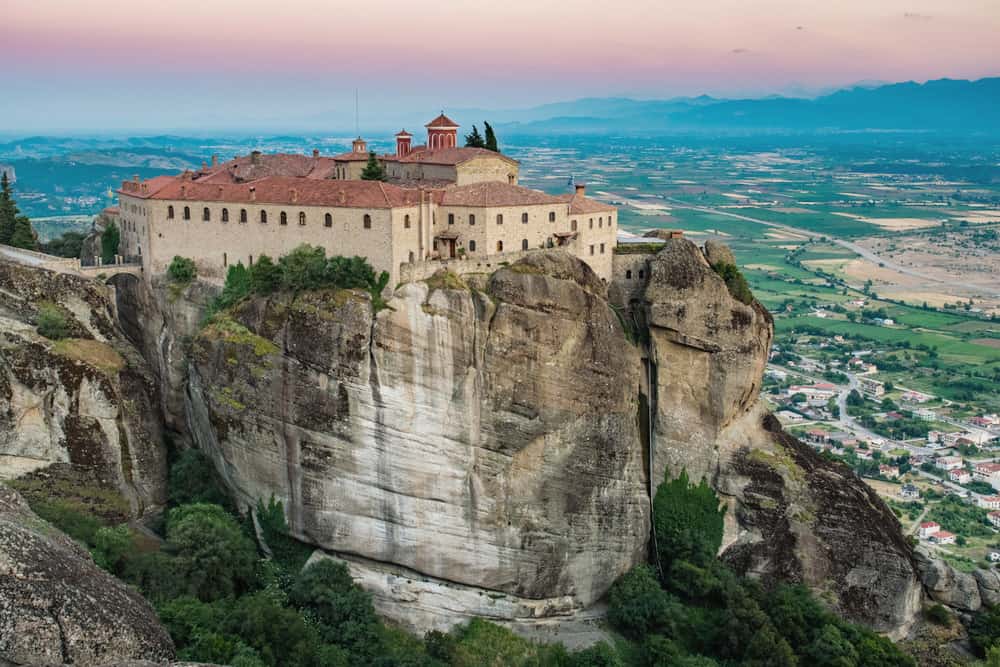 Standing out on the plain instead of on a cliff, the St. Stephen’s Monastery was built in the same 16th century with decorations dating from 1545. The Katholikon, dedicated to St. Charalambos was built in the Athonite style in 1798. The refractory was transformed into a museum.

Sad enough, the monastery suffered extreme damage due to shelling during the Nazi attacks in the World War II and had to be rebuilt afterwards by the nuns. Later on, the Communist rebels altered it even more during the Greek Civil War, but despite all that, the monastery still stands today and can be visited. 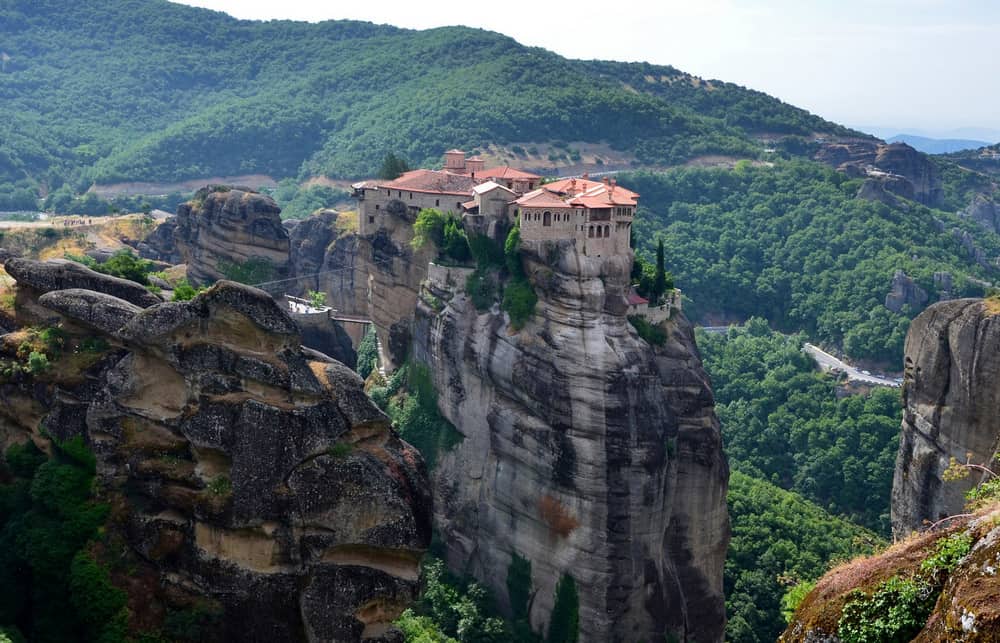 Varlaam is the second largest monastery in Meteora, built in 1541, with a church dedicated to All Saints. The Athonite architectural style is finished with a dome. The old refractory was transformed into a museum.

The Holy Convent and the frescoes were done by the monks Theophanis and Nektarios, and the church paintings are the work of Fragos Katelanos from Thebe, with the scene of the apocalypse standing out among all the other. 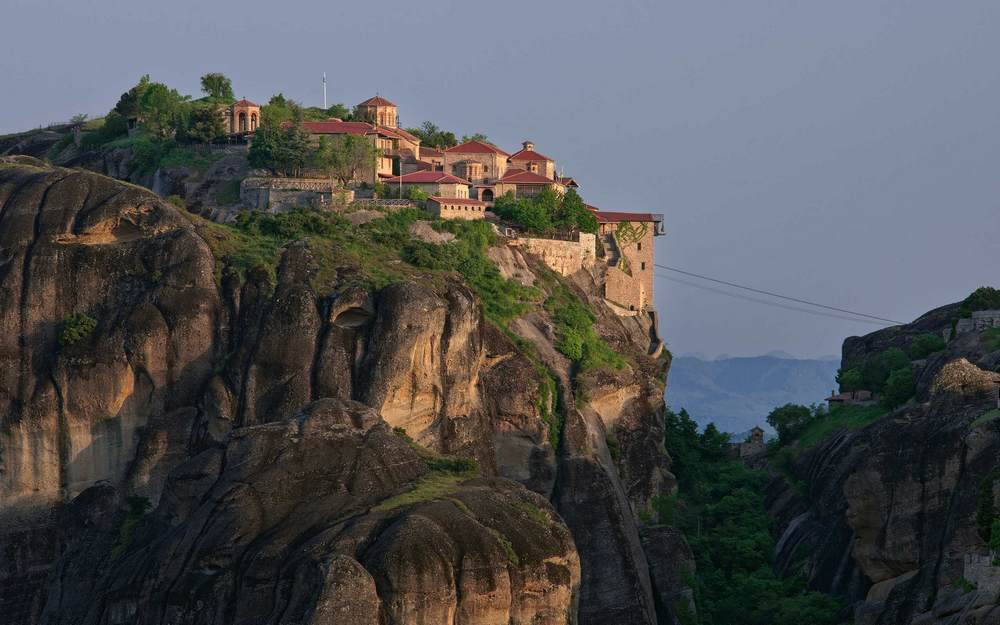 Standing watch atop the highest rock in the region – over 600 meters above the valley floor – is the largest of the monasteries in Meteora, the Great Meteron Monastery, built during the 14th century. The monastery went through restorations in 1552 and today it’s the oldest of the remaining ones.

Founded by St. Athanasios of Meteora, the Great Meteoron hosts an ossuary of the former monastery occupants, a wine cellar, a museum, and the Katholikon which was consecrated to honor the Transfiguration of Jesus. To reach the top of this great place one must climb over 300 steps, but the effort is worth it entirely. 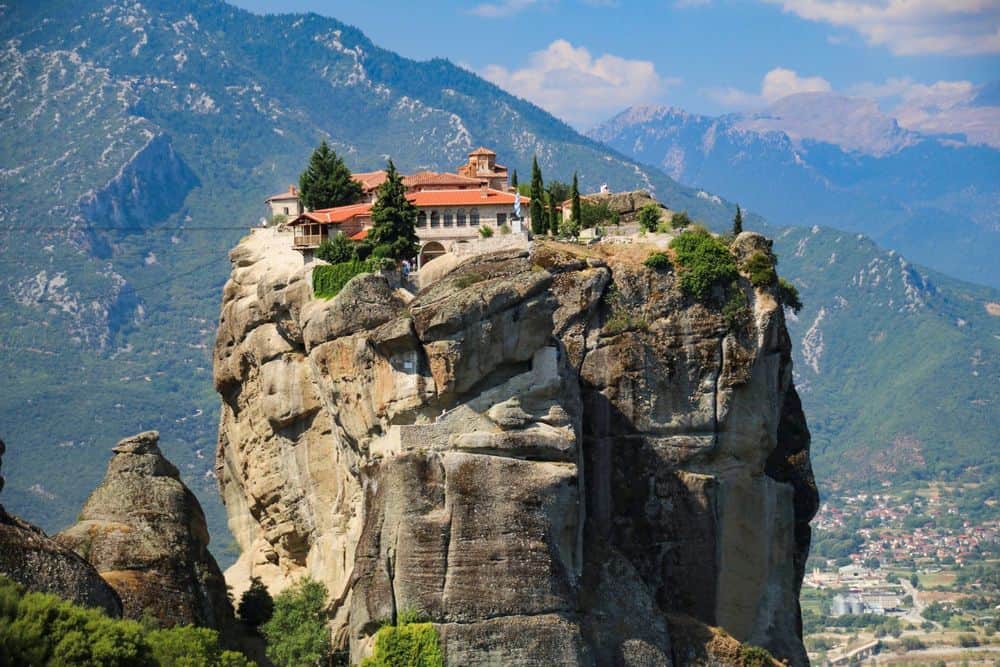 Dating from 1475 and restored in 1684, the Holy Trinity Monastery stands atop the cliffs as the most important of the six remaining monasteries in the Meteora complex. It was used as well as a setting for the 1981 James Bond film ‘For Your Eyes Only’.

Out of all the six monasteries, this is the most difficult to reach, the path going down a ravine and then back up before reaching the peak, but the effort is worthwhile as the vista is one of the most fascinating out of all six locations of the complex.