When travelers plan what to see and what to visit in their next vacation, they almost always think about the most famous landmarks in those places. And we have to admit that America has no shortage of them. If you’re planning a trip to the United States in the near future, make sure you don’t miss anything.

From stunning natural landscapes to some of the most impressive constructions man has been able to rise so far, America is the place to see them all. With historical sites and poignant memorials, impressive sky scrapers and amazing bridges and many other excellent examples of architectural innovation and rich cultural experiences, America is a land ready to impress anyone regardless of what they’re looking for.

No matter if you’re planning your next vacation or you’re simply curious, take a look at these 13 iconic US landmarks you should see at least once in a lifetime. Why 13? Not for bad luck, but because we didn’t want a list of neither 15 nor 10. 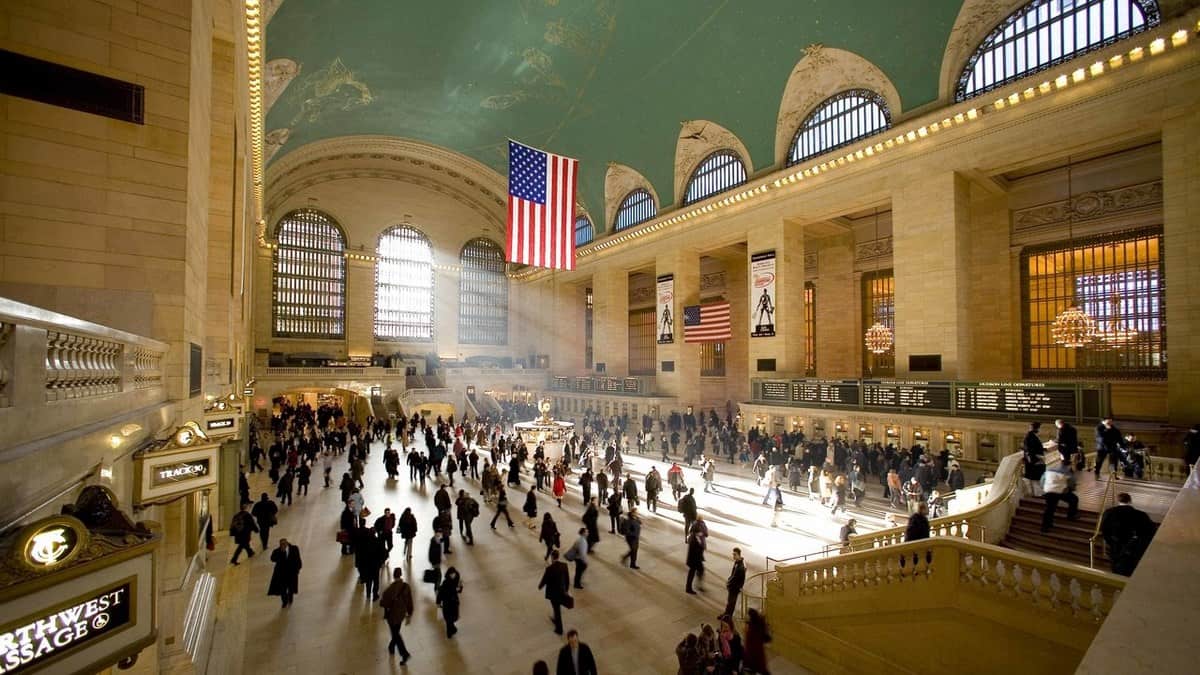 Situated right in the heart Manhattan, the Grand Central Terminal is well known for its architecture and impressive interior design. Appearing in many films across the years, teeming with both commuters and tourists and full of shops and restaurants, the famed railroad station has become one of America’s most recognizable landmarks. 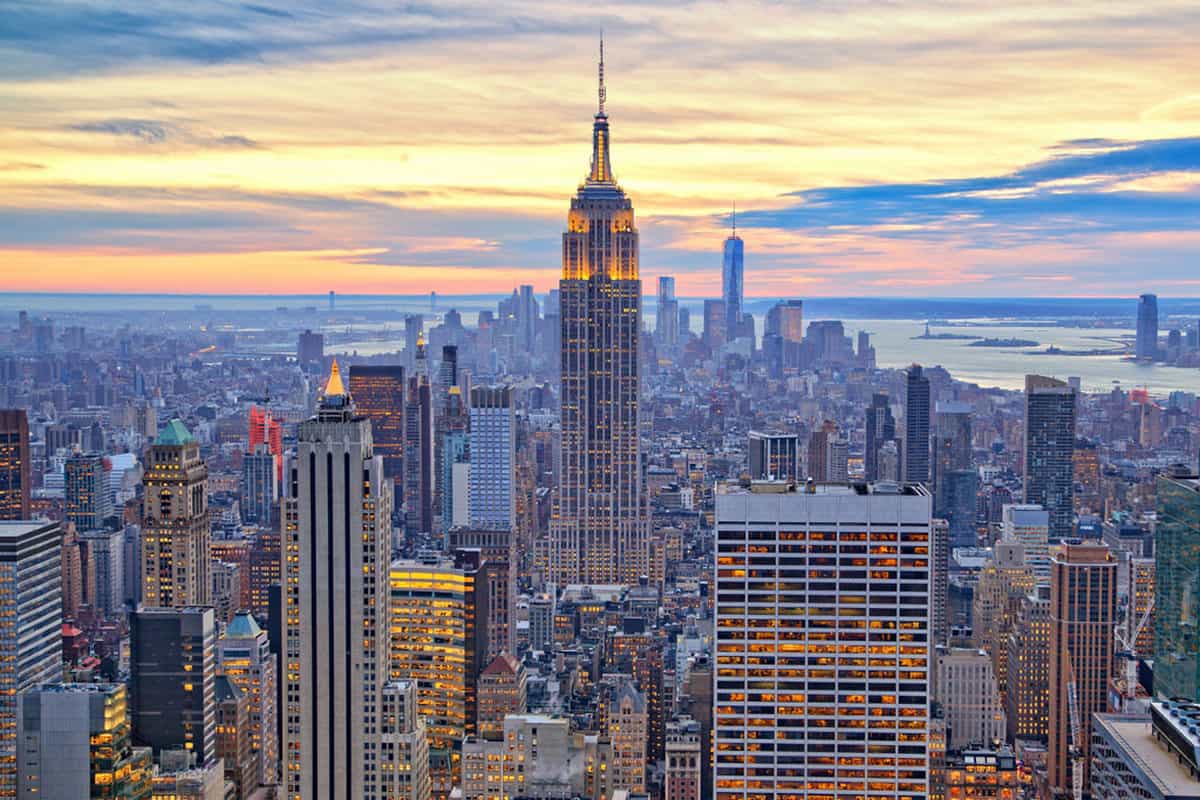 The 1,453 feet tall Empire State Building is probably one of the most renowned building in New York City. Situated on the Fifth Avenue, the building was constructed in 1930 – 1931. The building features two observatories, one on the 86th floor and another on the 102nd floor, with the first one being more famous for its 360 degree outdoor deck situated 1,050 feet above ground. The 102nd Floor Observatory rises 1,250 feet in the air but only provides an indoor viewing space. 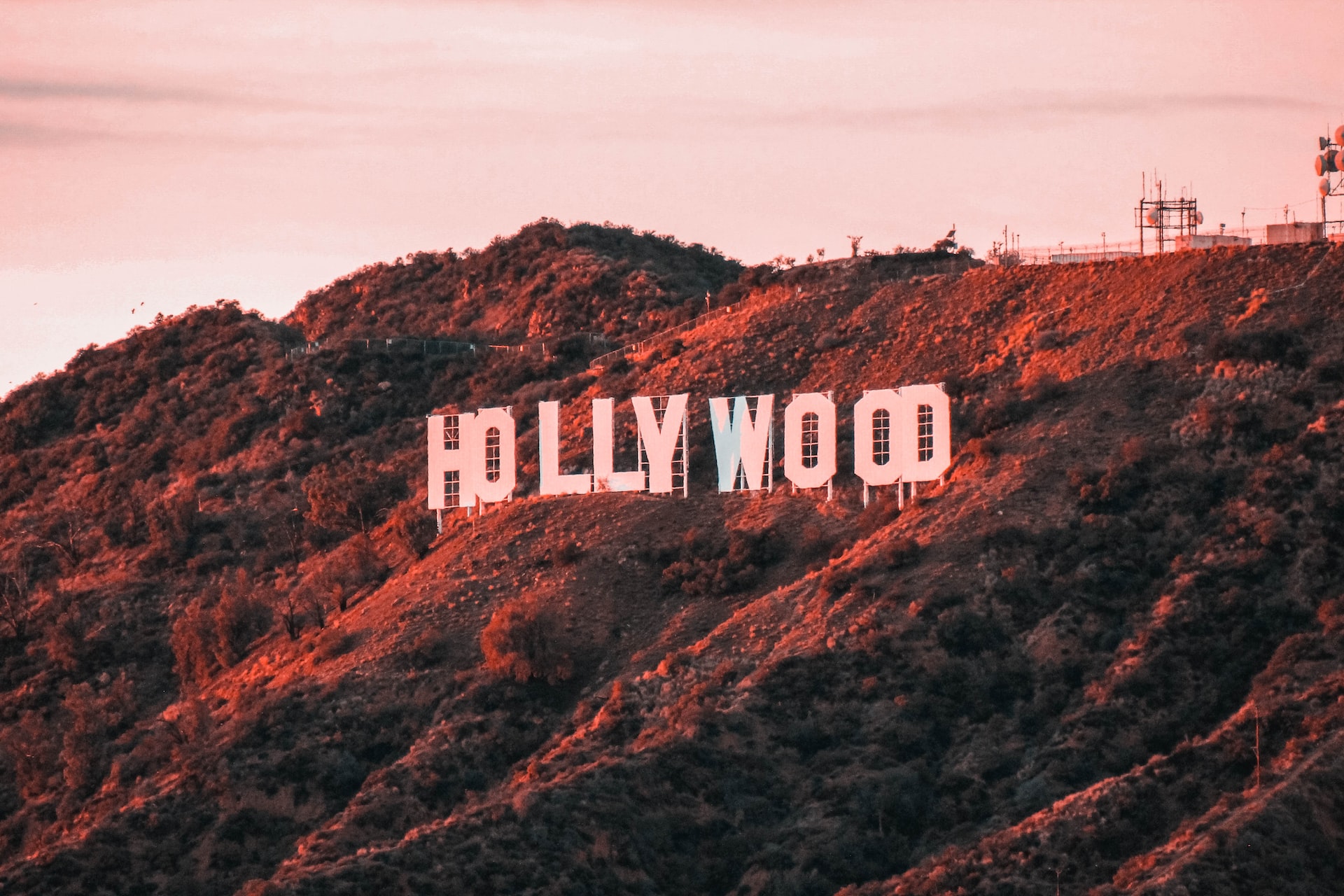 The famed Hollywood Sign was raised back in 1923 in the hills around the City of Angels and quickly became an iconic landmark in the American pop culture back in the days. Although many tie it to the Hollywood movie studios, the initial purpose of the sign was to actually boost the sales of real estate for the housing development firm called Hollywoodland.

The company, first owned by the Los Angeles Times publisher Harry Chandler, was acquired by the city after the Great Depression in 1944 along with all its properties, including the one with the sign. After having the letters ‘land’ removed and being repaired, the sign received official landmark status in 1973 from the City of Los Angeles Cultural Heritage Board. 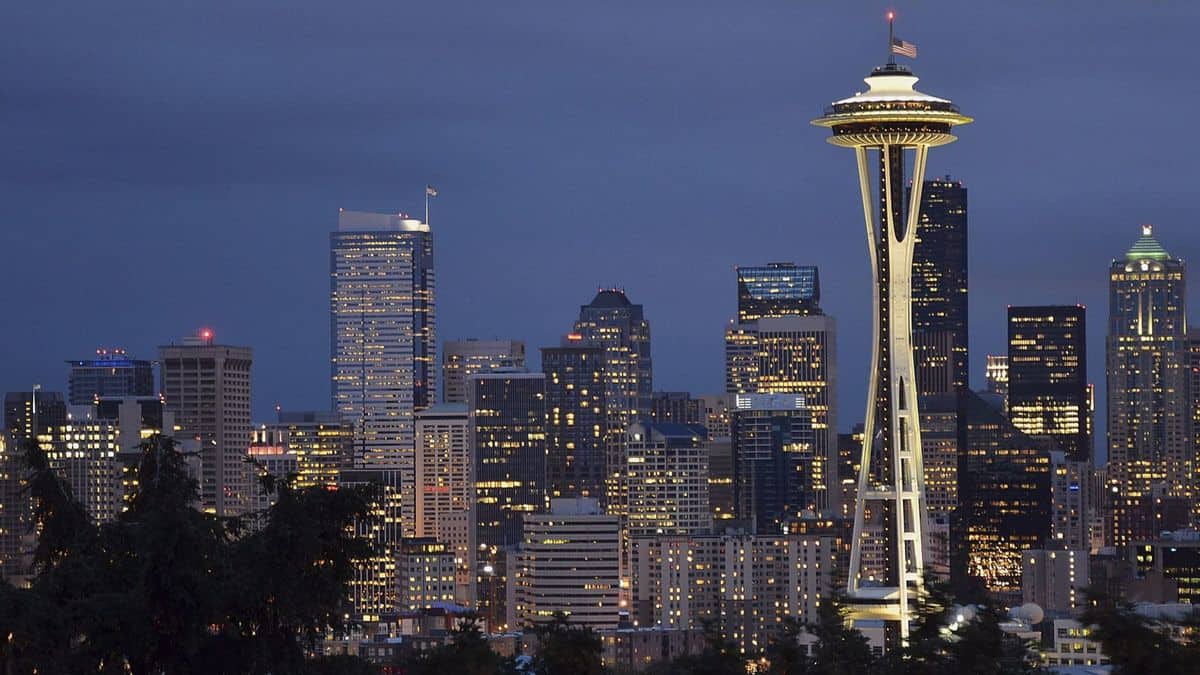 The Space Needle in Seattle, featured in almost every film and TV show, music video or any kind of story set in the city, is a symbol of the Seattle World Fair that took place in 1962. Raising 605 feet in the air, the futuristic looking building is the number one most visited touristic attraction in Seattle.

Its observation deck at 520 feet above the ground with 360 panoramic views of the city is what most guests come for, but there’s the SkyCity Restaurant as well for those who want a dinner setting high above the ground. 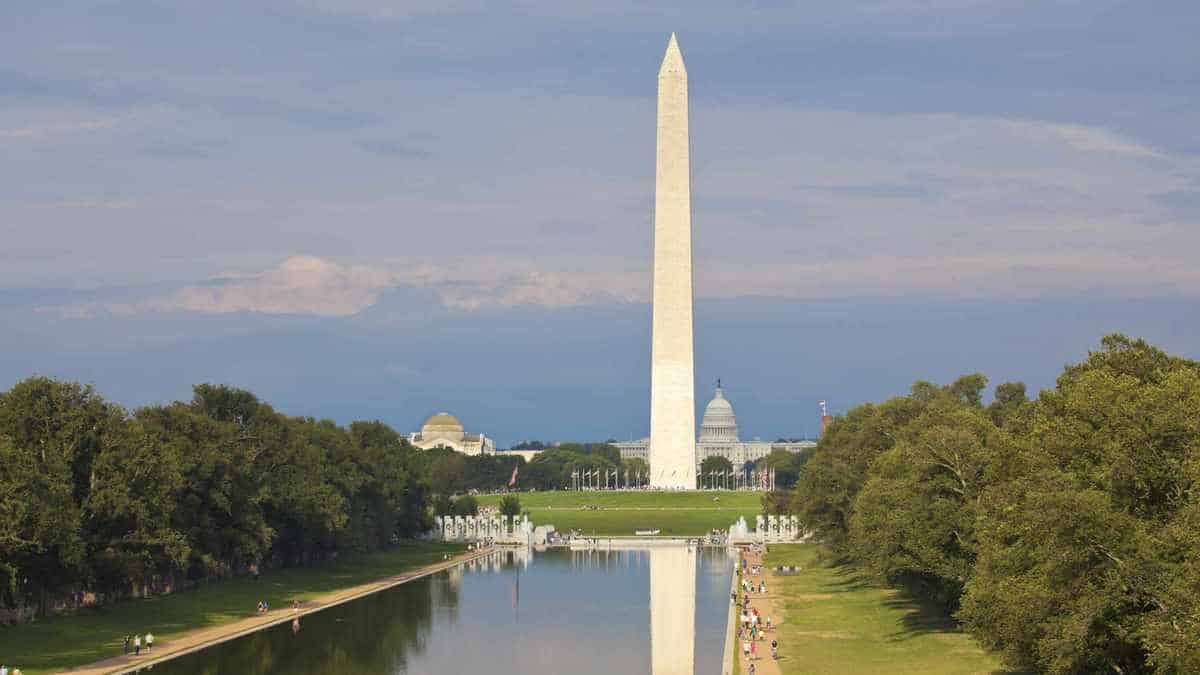 Situated on the National Mall, in between the U.S. Capitol and the White House, the Washington Monument is a 555 feet tall pointy obelisk constructed from white marble, blue gneiss and granite. The monument was opened to the public back in 1888 and commemorates George Washington, commander in chief of the Continental Army and the first president of the United States. 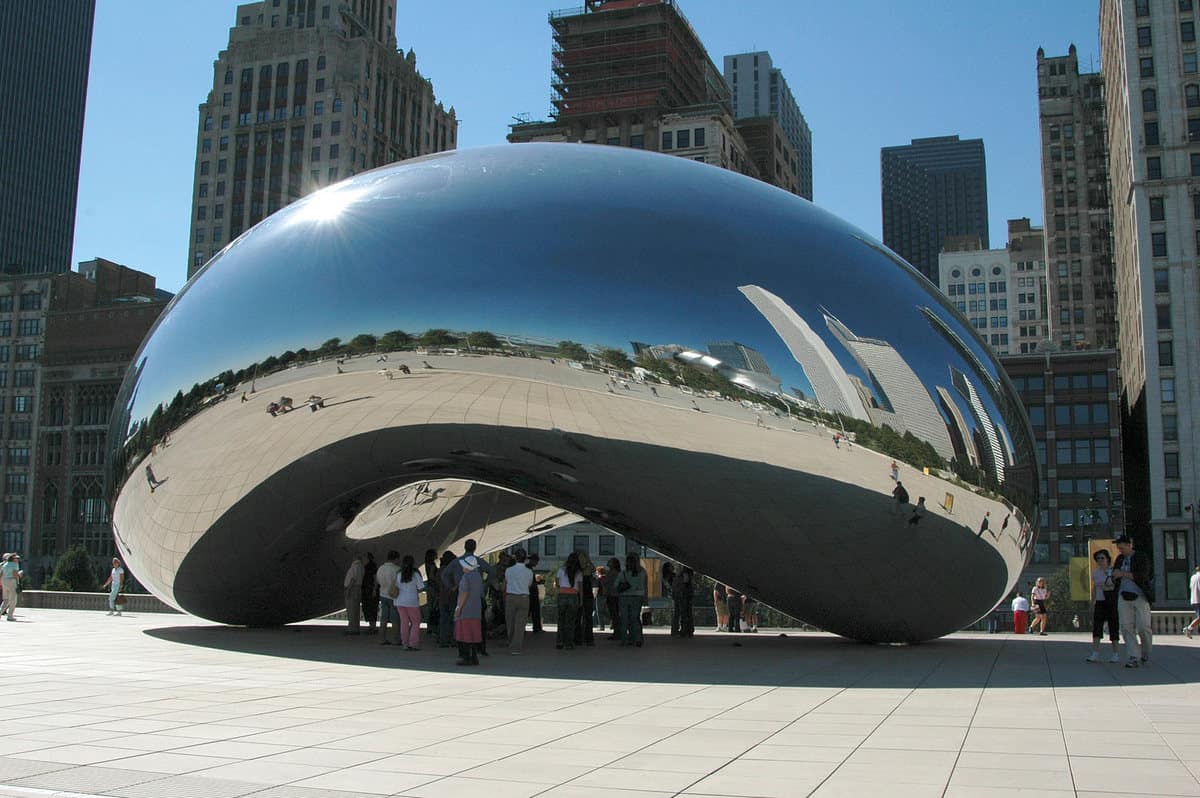 Featured in Chicago’s Millennium Park, the Cloud Gate, or ‘the Bean’ as it’s often called, is one of the most recognizable pieces of public art, and a fun one. Tourists stop, touch it and take pictures of the huge silver bean which has become an icon of the city of Chicago. 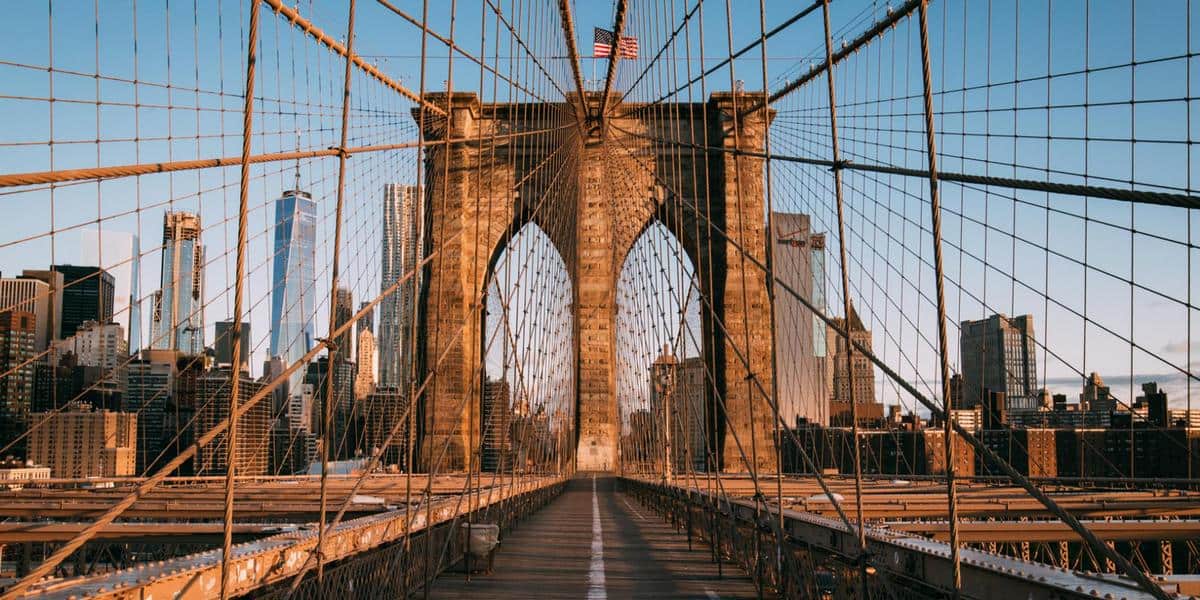 New York City’s Brooklyn Bridge is another famous icon of the America’s most famed city, and probably the world’s most recognizable suspension bridge ever. Opened to the public in 1883, the Brooklyn Bridge spans almost 6,000 feet, tying Manhattan and Brooklyn and offering marvelous sights to all those traversing it. 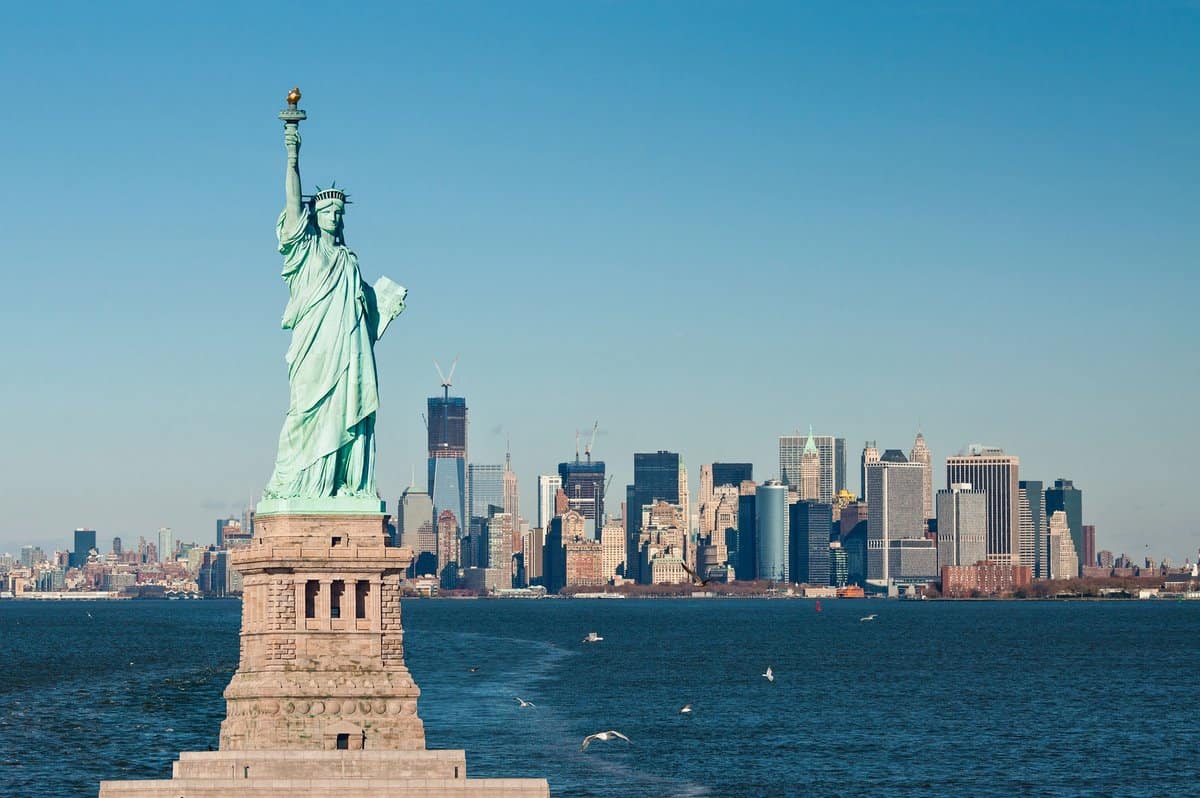 Statue of Liberty couldn’t have missed from this list, could it? Rising tall above Liberty Island, Lady Liberty impresses tourists with its majestic appearance with the stone tablet and lighted torch. The monument was given as a gift from France and sits on Liberty Island since 1886 as a symbol of freedom and democracy. 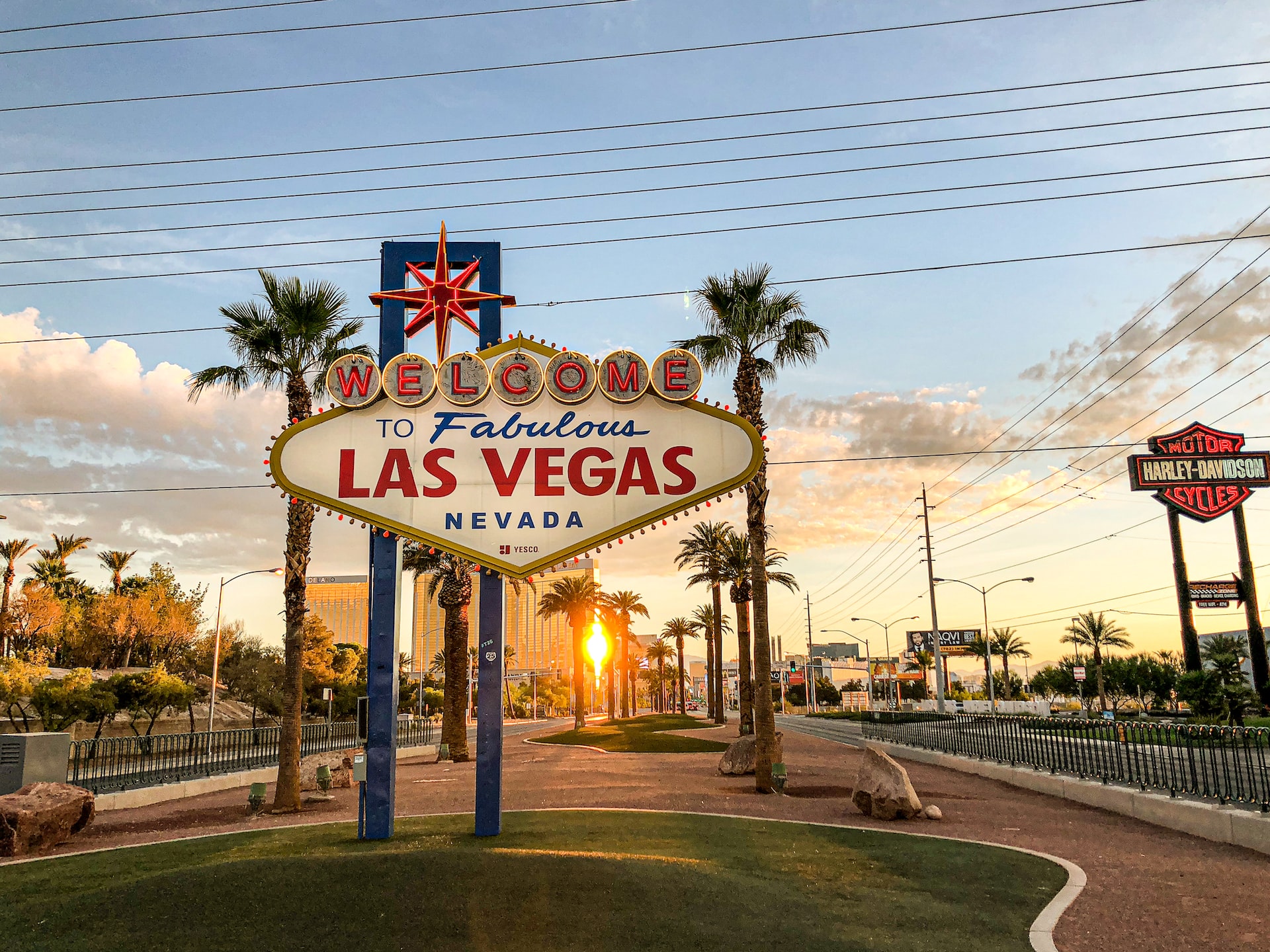 If you’ve ever watched a movie filmed in Las Vegas, you’ve surely seen the famed sign that says Welcome to Fabulous Las Vegas, Nevada. It’s everywhere. And it has become one of the most iconic places in the entire United States, with people coming from all over the world to admire it.

Created back in 1959 and sitting right at the beginning of the notorious Las Vegas Strip, the sign symbolizes everything that the Sin City is, with all the glitz and the kitsch. Due to its popularity, it was added to the Register of Historic Places on May 1, 2009. 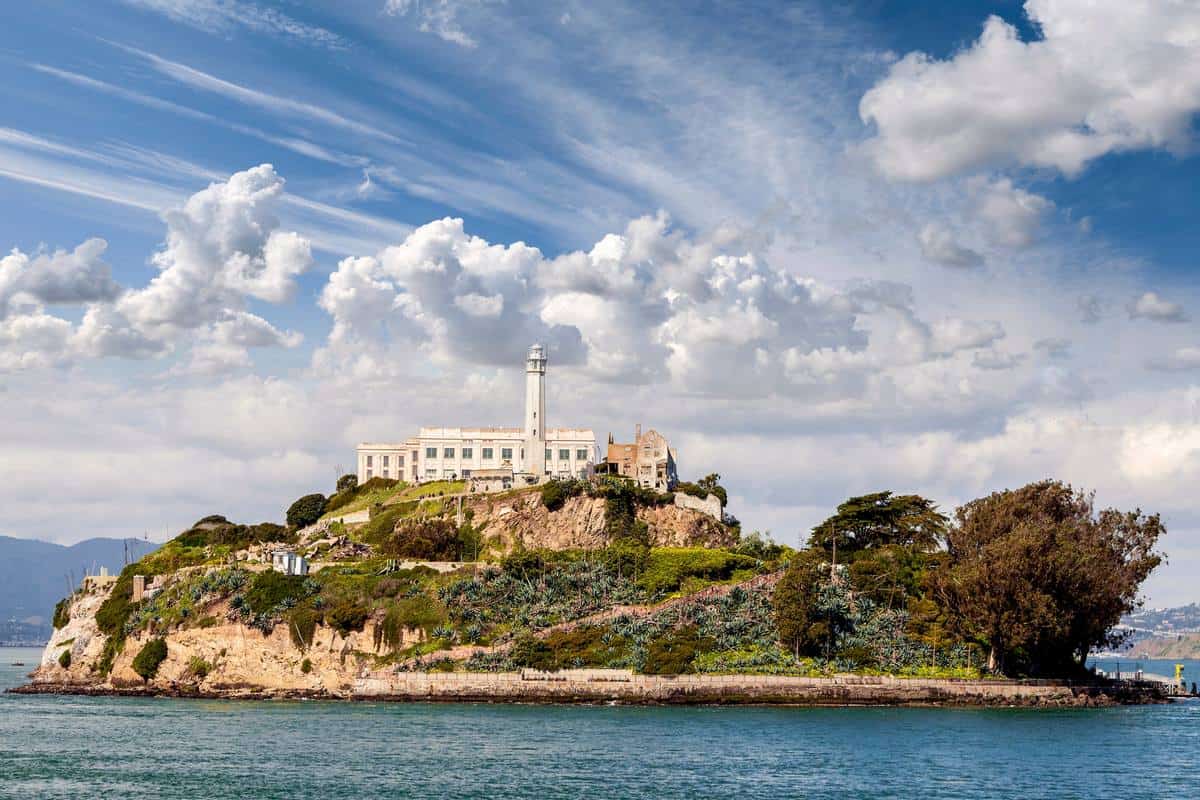 Dubbed ‘The Rock’, Alcatraz Island served as a federal prison between 1934 and 1963 which housed infamous names such as Al Capone and Whitey Bulger. The place inspired many films and novels and became one of the most visited places in America and a must see when in San Francisco, due to its past notoriety.

The history of the prison is full of famous escape stories and the island itself has an appeal like no other, offering superb views on the city of San Francisco. 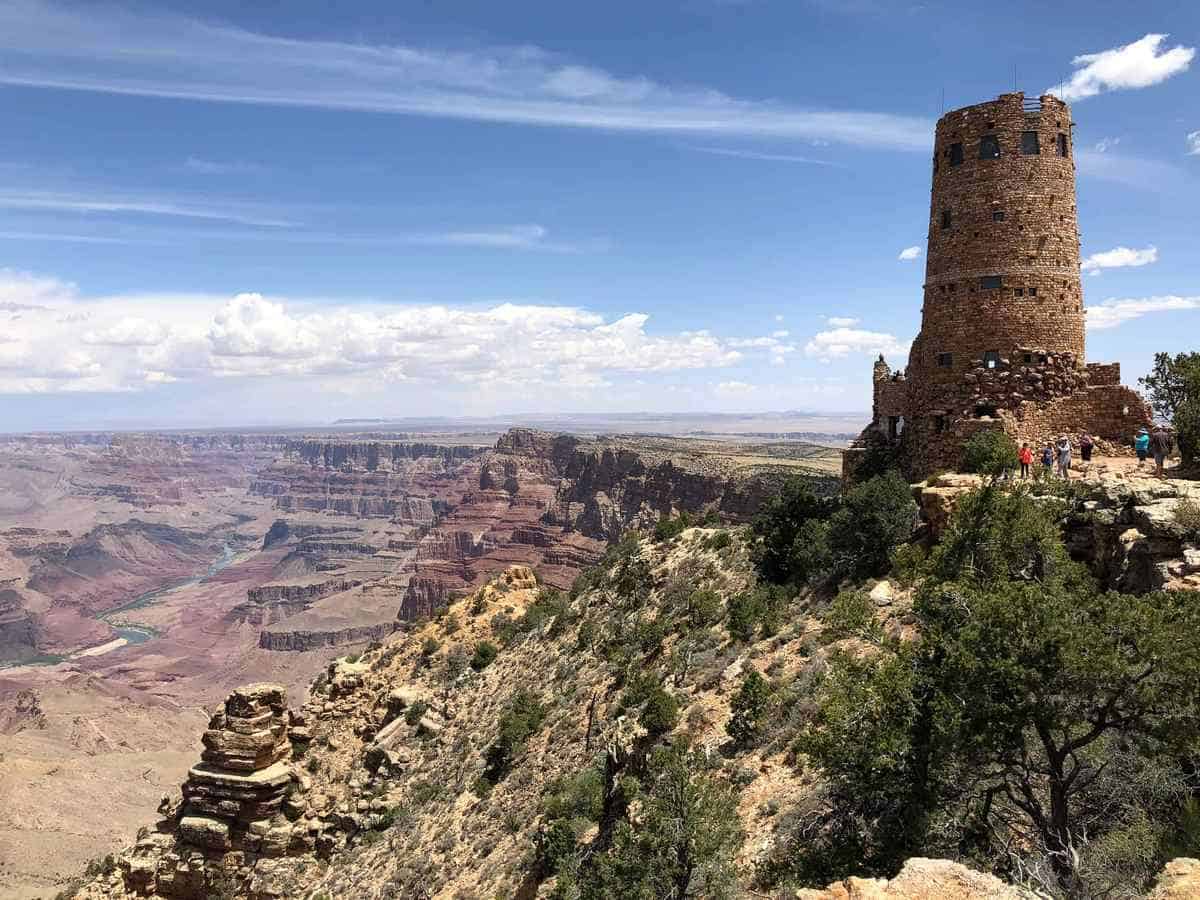 The Grand Canyon is probably one of the greatest natural landscapes in the world, and one of the most famous as well. With its breathtaking vertical walls and unmistakable colors, the Grand Canyon is a tourist magnet. Stretching 277 miles in the northwest corner of Arizona, one mile deep into the earth surface, it receives around five million visitors every year.

The Grand Canyon was named a National Park back in 1919 and offers plenty of superb hiking trails and adventures on the Colorado River. The views are simply stunning, with one of them being overly famous: the one from the Desert View Watchtower, built in 1932, now listed on the National Register of Historic Places. 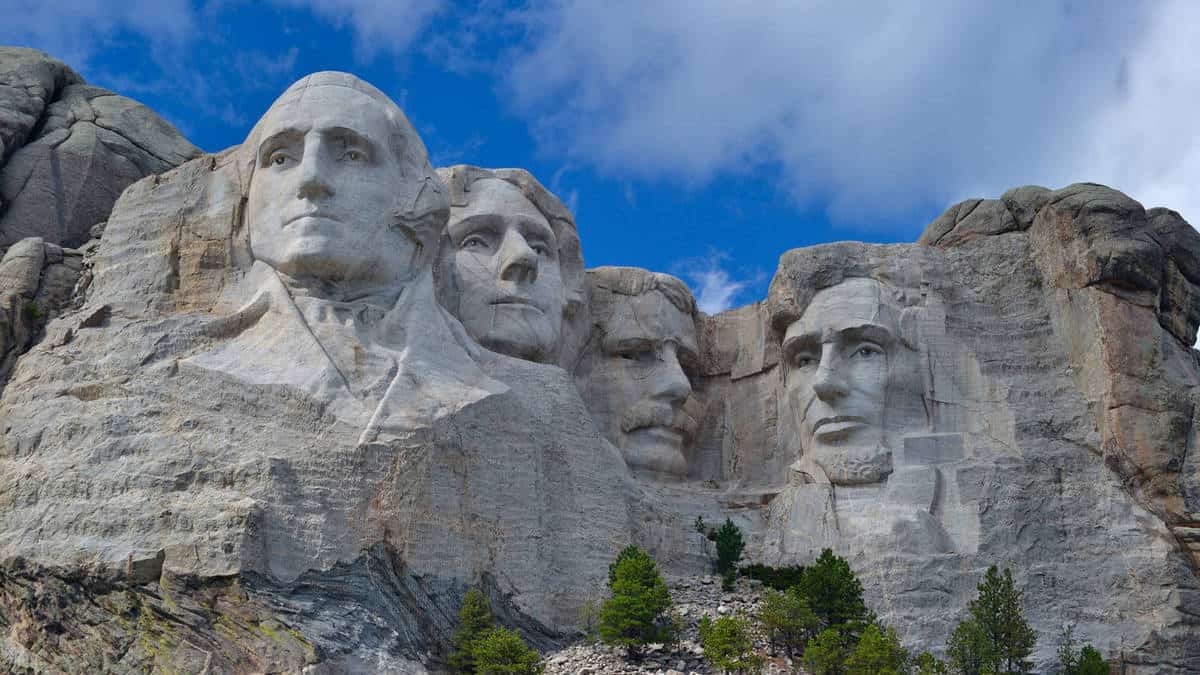 Mount Rushmore, more off the beaten path than other U.S. attractions, is a famous monument carved into a mountain of granite. Depicting four great American presidents – George Washington, Thomas Jefferson, Abraham Lincoln and Theodore Roosevelt – the jaw dropping monument rising high above the Black Hills of South Dakota became one of the top tourist destinations in the United States.

Completed over the course of 14 years and after many challenges to overcome, the monument offers an impressive tour of its natural surroundings, history and culture. The Presidential Trail at its base is among the most walked trails, with various tours available all over the year. 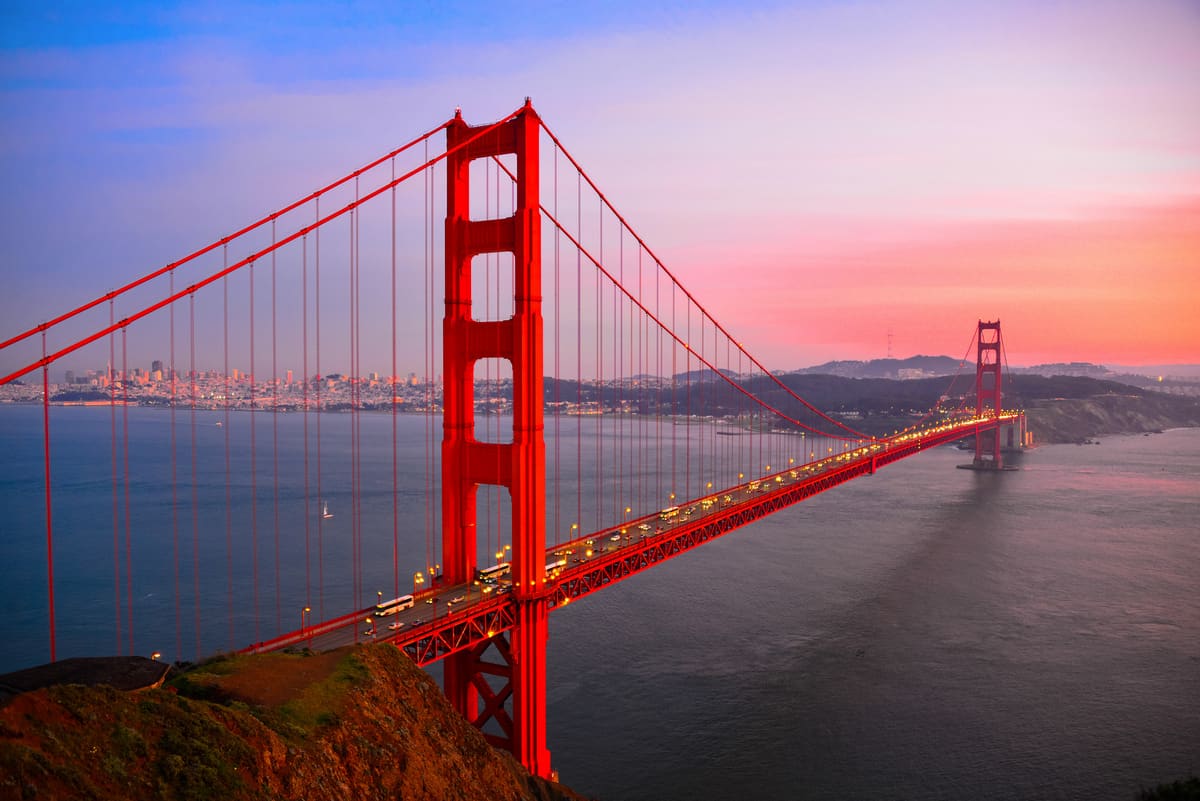 Part monument, part a necessary thoroughfare across the Golden Gate Strait, the beautiful Golden Gate Bridge in San Francisco is one of the most visited tourist attractions of the city and of the entire US. It was built back in 1933 and spans a total of 1.7 miles, with its impressive towers rising 746 feet high above the water.

Much admired from both the distance and close by, the Golden Gate Bridge is surrounded by plenty of walking, biking and hiking trails on its southeast side, offering stunning landscapes and breathtaking views of the bridge and the San Francisco Bay.

Tags:
Previous Article
The Iconic X-Games House is Looking for a New Owner
Next Article
The New Ultima RS will be the Star of the Goodwood Festival of Speed 2019