We’ve already featured the most incredible homes owned by NFL players, the lavish mansions of pro baseball players, and the jaw dropping homes owned by NBA stars… the next logical step? It involves ice and skates.

With blood, sweat and tears, hockey is more than just a simple sport, it’s a unique way of life, as NHL players never really stop training. Even in the off season, when any other athlete would normally have a few weeks off, these players try to stay in shape and keep their skills sharp. That’s why the league pays off really well, on and off the ice.

Since the playoffs have started just a few days ago, today we’ve decided to take a closer look at some of the most amazing homes owned by current (or former) NHL players.

Ever since he joined the NHL, Patrick Kane has been nothing short of spectacular, with the MVP award he received last year being just the cherry on top for the high scoring Blackhawks winger. The three-time Stanley Cup champion lives in this charming 6,000 square foot mansion, which he bought back in 2012 for a cool $2.68 million.

Nestled just a few minutes away from his hometown, in South Buffalo, New York, this lovely property comes with five bedrooms, 3.5 bathrooms, and sits on 2.74 acres, with direct access to Lake Erie. Kane’s home also features a small pool, several fireplaces and all kinds of interesting amenities, but it’s been recently listed for sale at just $3.2 million. So.. if you ever wanted to live like Patrick Kane, this is a once-in-a-lifetime opportunity. 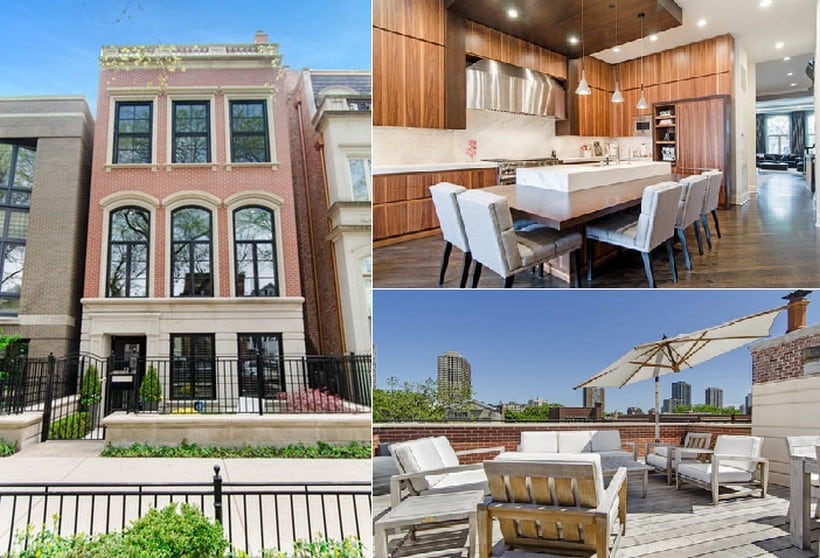 We’re moving on from one Blackhawks star to another, as the team’s captain, Jonathan Toews, is the proud owner of this real gem from Chicago. After three Stanley Cup victories, multiple Olympic gold medals and a massive contract extension signed a few years ago, Toews rewarded himself by purchasing this mesmerizing property in one of the most prestigious areas of Chicago for $3.5 million.

Built in 2001, this residence spreads over 6,400 square foot, with five bedrooms and five baths, and amenities like an indoor elevator, 11-foot ceilings, custom lighting and hardwood floors, a custom sound system, and a huge rooftop deck, with a pergola, a fireplace and plenty of seating, plus a two car garage. 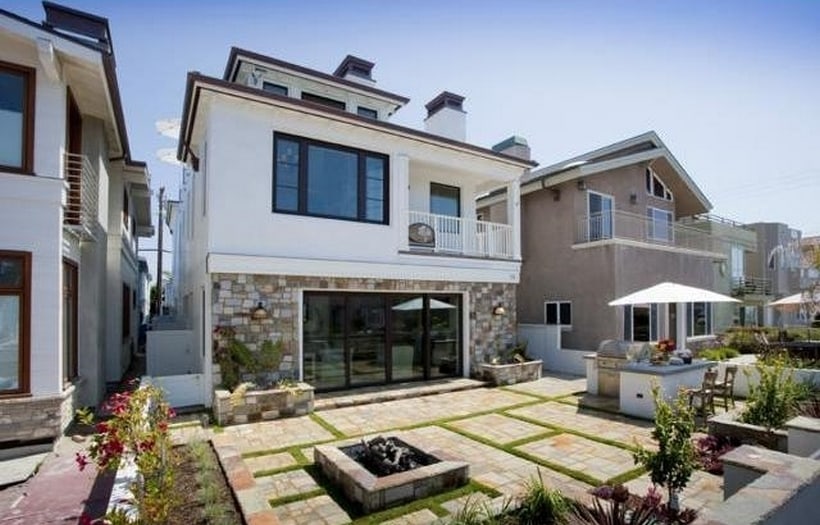 L.A. Kings center Jeff Carter splashed out $5.25 million on this mesmerizing home in Hermosa Beach, California four years ago. Spreading over 4,100 square foot, this wonderful residence has six bedrooms and five bathrooms, plus an additional guest suite, that might be perfect if one of his team mates decides to crash in for a night.

In addition to the extra space, Carter’s lovely house offers a ton of awesome amenities, like a custom bar and a wonderful outdoor patio, complete with an outdoor pit. But the best part is that it’s located just a block away from the beach, which makes the entire picture even more alluring. 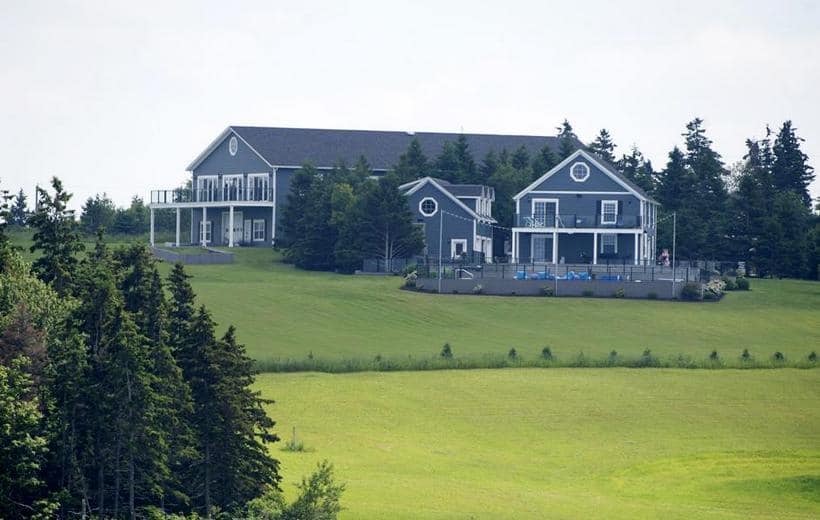 After seven unforgettable seasons with the Toronto Maple Leafs, Dion Phaneuf moved to the Ottawa Senators two years ago, and a few steps closer to his lavish waterfront property on Prince Edward Island. Providing the perfect escape from hockey and the busy city life, this charming custom estate has been built a few years ago right next to a compound of cottages owned by some of his relatives.

Unfortunately, we don’t know too many things about Phaneuf’s home at the moment, but it was the scene of his marriage with the super cute actress Elisha Cuthbert in 2013. If you ask us, that’s a bigger achievement than this charming P.E.I. residence. 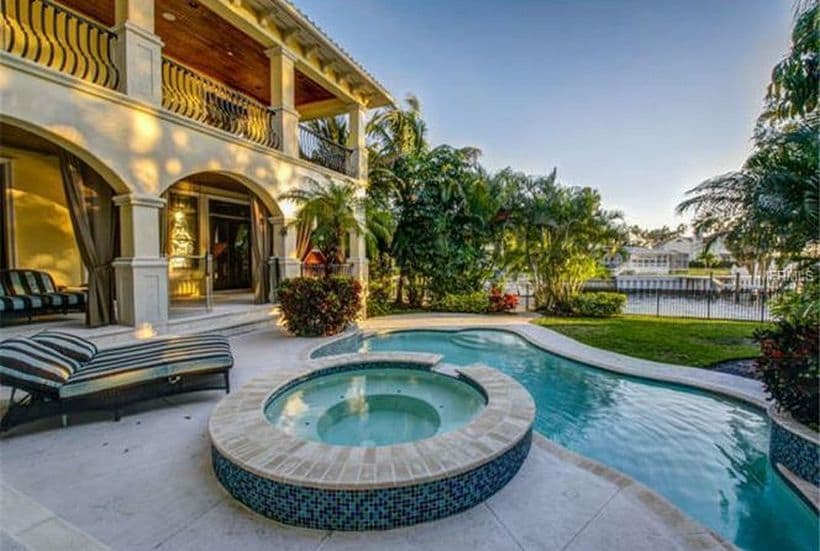 Last summer Vincent Lecavalier announced his retirement from the NHL, but he will always be remembered as one of the best centers in the game, especially by the people in Tampa Bay, after bringing home the 2004 Stanley cup. He might have ended his career at the Kings, but Vinny’s heart is still in Tampa, and his wonderful home is there are as well.

Located on Davis Islands, Lecavalier’s home is a magnificent mansion, spreading over 7,636 square feet, with 6 bedrooms, 7 bathrooms, and many drool inducing amenities like a home theater, a climate-controlled wine room, stunning views of the bay and best of all, a workout facility hidden behind a trapdoor in the library. Vinny apparently listed this home for sale at $4.5 million when he moved to Philalphia, but we don’t know if it was actually sold or not. 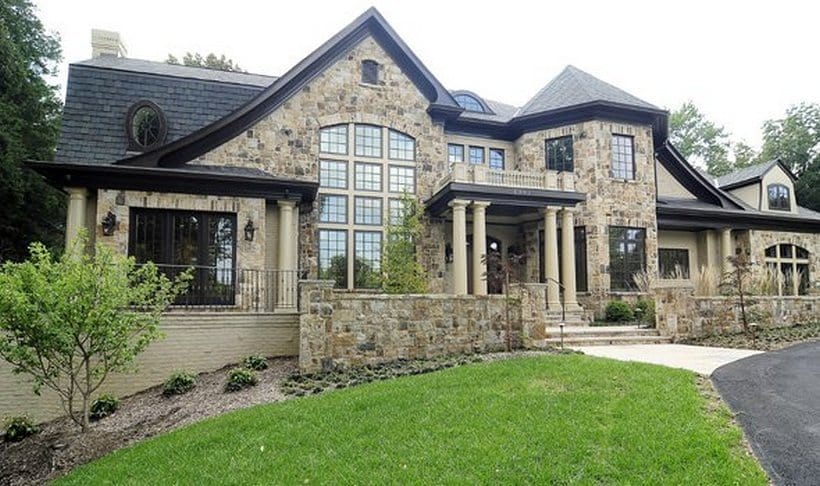 Even if you’re not following hockey closely, we’re pretty sure you’ve heard of Alexander Ovechkin at least a couple of times until now. That’s because the Russian ace has been scoring like a mad-man ever since he was drafted in the NHL, leading the league 6 times in goals, taking home three MVP awards and breaking many NHL records in the process – that calls for a celebration, right?

Probably that’s why the Washington Capitals star splashed out a cool $4.2 million on this gorgeous mansion, found in McLean, Virginia, back in 2012. Featuring 5 bedrooms, 7.5 bathrooms and 11,000 square feet of luxurious living space, Ovie’s charming mansion also comes with a lovely library, a massive rec room and a lavish master, plus many other interesting amenities. 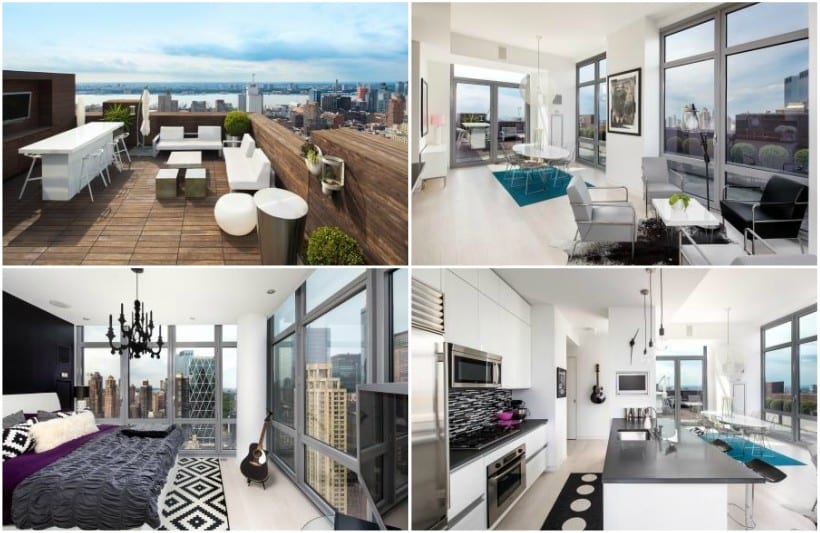 King Henrik (as Rangers fans often call him) has been living in this mesmerizing New York City penthouse in these past couple of years. Located at 310 West 52nd Street, the stunning 2,035 square feet duplex offers a perfect mix of privacy and luxury, with an uber-contemporary decor and all kinds of interesting amenities, plus breathtaking views of the NYC skyline.

A large entertainment area on the upper level, floor to ceiling windows, an open chef’s kitchen with a cozy dining area and a modern living room, make this residence totally interesting, but the 1,000 square feet terrace takes it to the next level, with an outdoor bar, a massive TV, hot tub and even a foosball table. In the summer of 2014 Henrik Lundqvist has listed this gorgeous penthouse for sale at $6.4 million, but he didn’t manage to sell it back then. 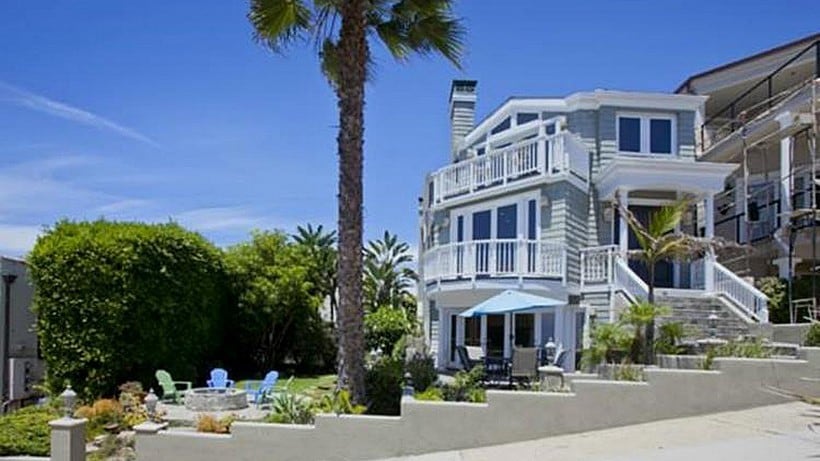 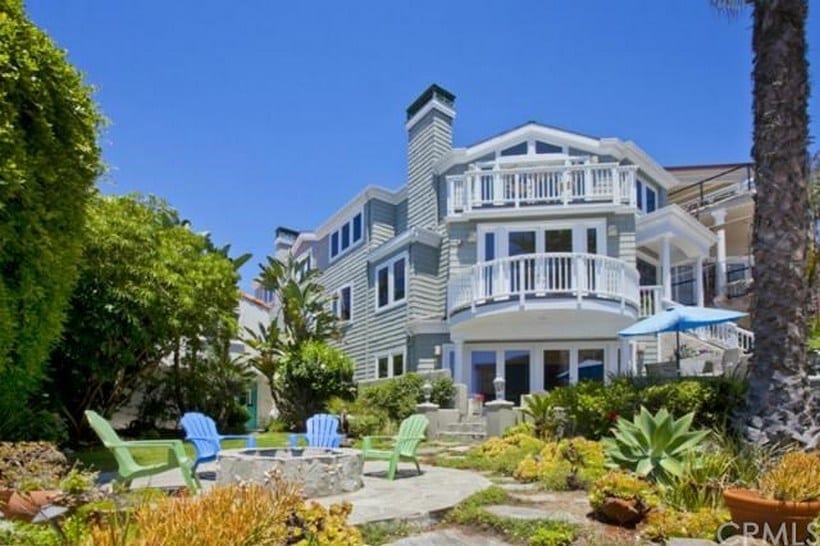 Most people would settle for just one multi-million dollar home, but the star center and captain of the Los Angeles Kings probably thought he might need two homes one day. In 2014, right after the second Stanley Cup victory for the L.A. Kings, Anze Kopitar splashed out exactly $10 million on two incredible homes, in Manhattan Beach, California.

The main residence spreads over 4,600 square feet and comes with 4 bedrooms, each of them with its own fireplace, a custom media room and ocean-facing balconies. And if you thought that’s impressive, you should know that the main floor leads to a patio area that’s larger to most homes out there, with a custom barbecue and an outdoor fire pit. 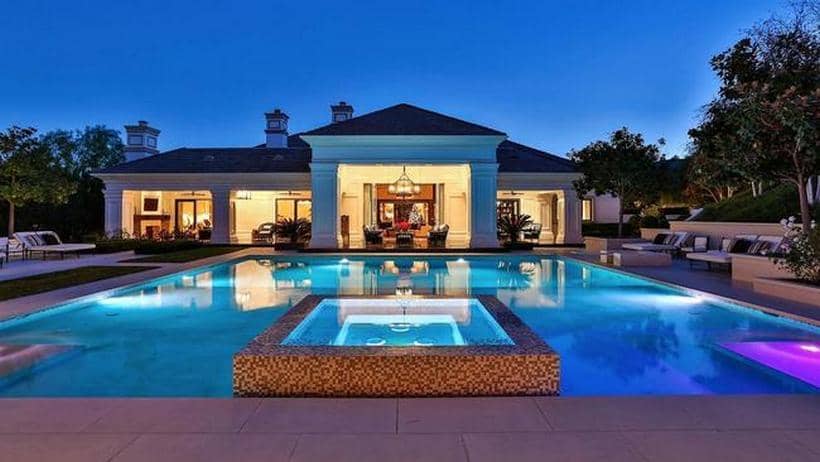 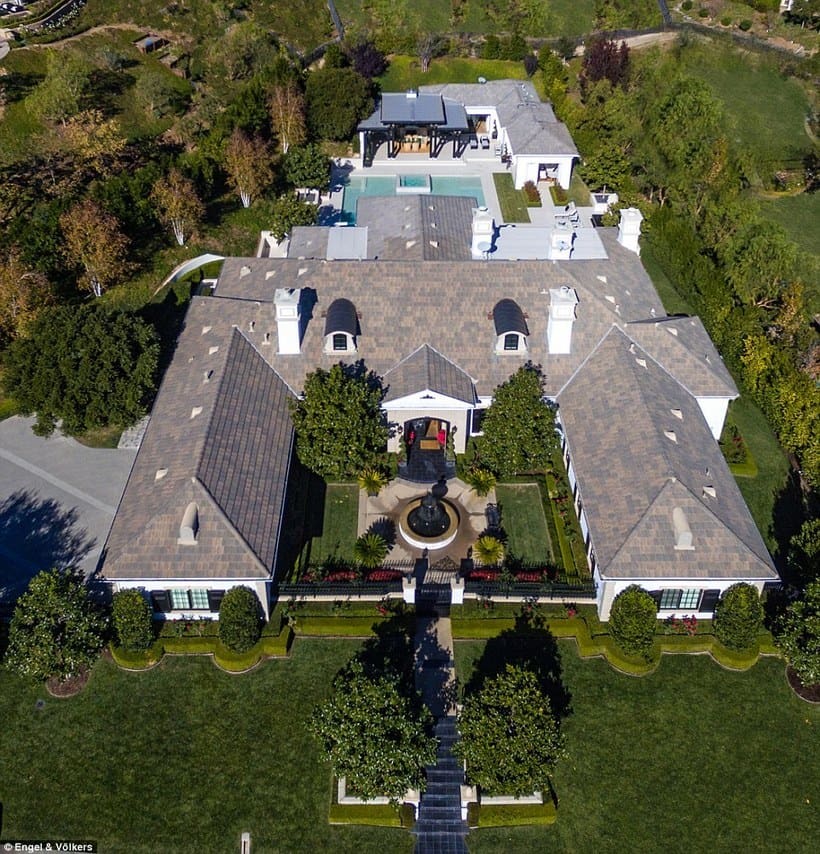 Widely regarded as the greatest hockey player of all time, Wayne Gretzky is just no. 2 in our list. The Great One has been the proud owner of many jaw dropping properties in the US, the most impressive of them being a palatial residence just outside of Los Angeles. Custom built in 2002, that sprawling mansion was nestled on 6.5 acres of land, with too many incredible amenities to mention, but Gretzky sold it a few years later to former MLB star Lenny Dykstra for a staggering $17.5 million.

The hockey legend still had a few aces up his sleeve, like this charming country club home before you, found in Westlake Village, California, right in the Sherwood Country Club. The gorgeous 8,711 square feet mansion before you features five bedrooms and six bathrooms, with a gym, an outdoor pool and a pool house, plus many other goodies. But Gretzky also listed this mansion for sale, at $10.5 million for the first time and at just $8.195 a year later. 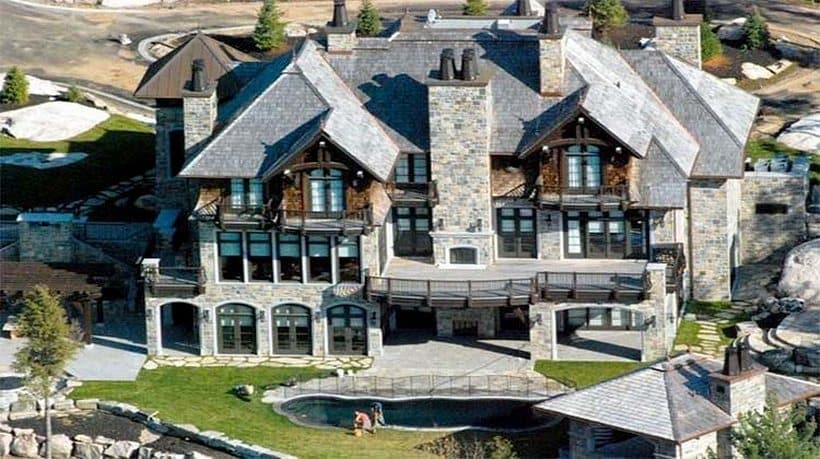 On the ice Mario Lemieux might have been outshined by Wayne Gretzky, but off the ice things are a little different. You see, back in 2009, Lemieux started to build this magnificent chateau-style mansion in Mont Tremblant, Quebec, and a few years later and after spending around $20 million, Super Mario finally received the keys to his new vacation home.

The mind blowing 15,000 square feet Tremblant mansion was specially designed to complement its magical surroundings, and it comes with exactly 23 rooms and 10 bathrooms. It also has a massive pool, a tennis court with a heated floor, an impressive garage and many other luxurious amenities. And if you’re wondering why we’ve said vacation home, that’s because the Penguins’ owner also has a gorgeous home in Pittsburgh, where he’s spending most of his time.

Tags:
Previous Article
Ariana Grande Net Worth 2021 – How Rich is Ariana Grande?
Next Article
Truly Exquisite adds the Touch of Midas to the Samsung Galaxy S8