Throughout history, people have created countless magnificent artifacts and amassed huge treasures. But as we all know, nothing lasts forever – beautiful and precious things especially are quite susceptible to decay and destruction, and are also more likely to catch the eye of robbers and looters. The following are some of the most notable of the world’s lost treasures, some of them gone forever, others simply “misplaced” and whose discovery would make someone instantly rich:

Normally, you wouldn’t think a stash of 10-cent coins would be of much value. But what if those coins were worth a lot than their nominal value and there’s literally a truckload of them?

Even though millions of 1907 Barber dimes were minted, few remain which are in good condition. There’s a story about a wagon train which left Denver for Phoenix in 1907 carrying six barrels filled with these coins – but the shipment never arrived. The mystery itself is interesting enough – some people think the wagon train was attacked by bandits, others speculate that it fell to the bottom of Colorado’s Black Canyon while trying to navigate the difficult mountain trails – but the value of the shipment makes it even more appealing. Provided the coins are still in good condition, a few thousand of them could be worth millions of dollars today, especially with the added allure of their strange disappearance all those years ago. 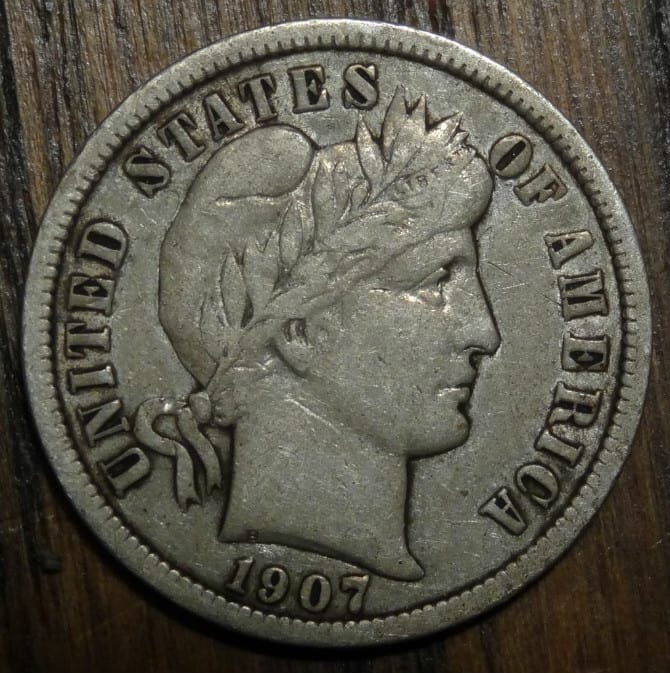 The entire existence of the beautiful Florentine Diamond is shrouded in mystery. The precious stone reportedly traces its origins back to India and is thought to have been cut by a 15th century Flemish jeweler Lodewyk van Bergen for Charles the Bold, Duke of Burgundy, but was then acquired by Ferdinando I de Medici, Grand Duke of Tuscany (hence the name).

Weighing in at 137.27 carats, the diamond was bright yellow with green overtones and was cut in the shape of an irregular nine-sided, 126-facet double rose cut. The stone ended up in the possession of the Austrian imperial family and was taken by the last Austro-Hungarian Emperor, Charles I, with him into exile in Switzerland. The Florentine Diamond was then stolen and taken to South America – and its subsequent fate remains a mystery. 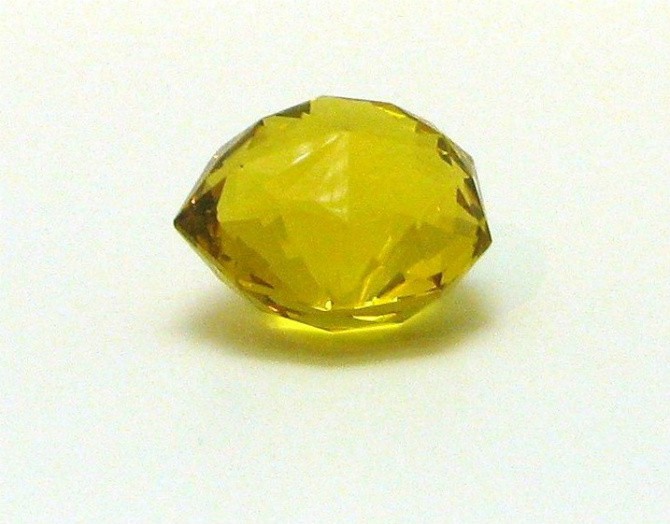 War has been responsible for the loss of priceless artifacts to the same degree as time and the elements. In recent years, one of the appalling acts was the looting of the Iraqi National Museum in Baghdad, during the 2003 invasion of the country.

In ancient times, the land which is now Iraq was known as Mesopotamia and is considered the cradle of civilization, where the Sumerian, Assyrian, and Babylonian cultures flourished. In the chaos following the occupation of Baghdad, the museum was looted, with many irreplaceable relics being pillaged or destroyed. Among these were the invaluable 5,000-year-old Warka Vase and a highly prized ivory relief called the Lion of Nimrud. One curator called this “the crime of the century”, while the director of the British Museum called it the greatest such catastrophe since the Second World War. 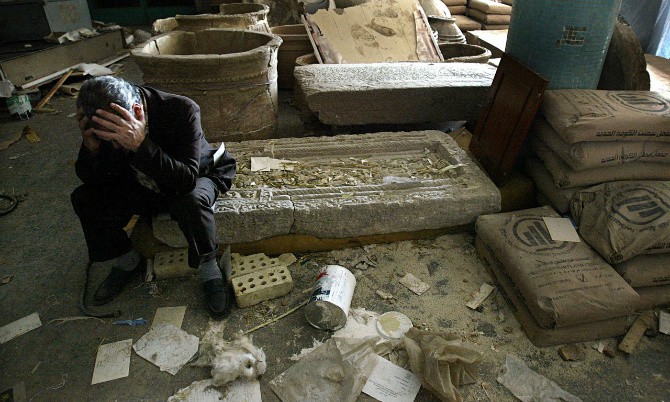 The Age of Exploration, when European ships sailed the world’s oceans for the first time, was not only a period of discovery and cultural exchanges – but also a time of extensive looting. Precious cargo from the New World was constantly being shipped back home, but the ocean was a treacherous place and many vessels never made it back home.

One of these is the Portuguese carrack named Flor del la Mar. The ship was heavily involved in various battles throughout the Indian Ocean, as the Portuguese conquered (and looted) parts of India, the Arabian Peninsula, and Indochina. Sailing, especially over long distances, wasn’t exactly done in the safest conditions back then, and after a long service (by the day’s standards) of almost ten years, Flor de la Mar was caught in storm and eventually sunk of the coast of Malacca (present day Malaysia). The ship reportedly had a cargo of 200 coffers filled with precious stones, perhaps the largest treasure ever lost at sea. Yet despite efforts to locate and salvage the shipwreck, no sign of it has ever been found. 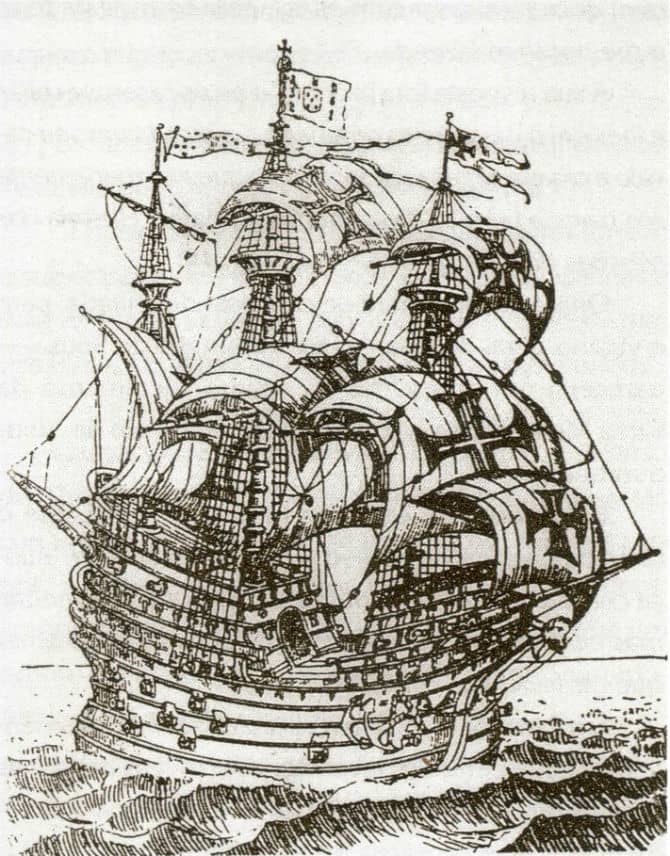 One hundred years ago the Russian Imperial court was probably the most opulent in the entire world and nothing epitomizes this more than the exquisite jeweled eggs crafted by Peter Carl Fabergé for the royal family each Easter for more than three decades.

These aren’t you’re regular Easter eggs, but veritable works of arts. Made using such materials as gold, diamonds, pearls, various enamels, and many other kinds of precious stones, the priceless pieces are elaborately decorated and can be opened to reveal equally precious “surprises”.

After the Russian Revolution these masterpieces were confiscated by the Soviets and while some were subsequently sold abroad, a few of them could not be found. Out of the 54 Imperial Eggs (created by Fabergé exclusively for the Tsar and his family), most are in private or public collections around the world, but the whereabouts of eight of them remain unknown. Fabergé Eggs have been bought at auction for as much as $9.6 million (the 1913 Winter Egg, in 2002), so it’s safe to say anyone of these lost artifacts is worth a small fortune. 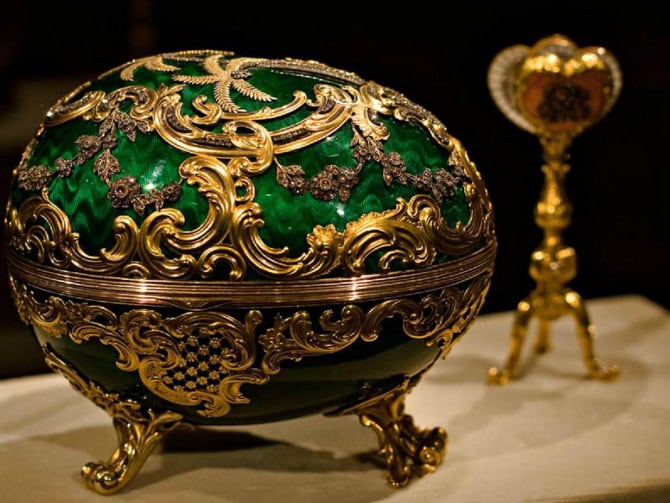 At about the end of the 18th century, the Poles weren’t exactly having the best of times. Caught between three of Europe’s great powers (the Austrian Empire, the Kingdom of Prussia, and Tsarist Russia), the once mighty kingdom was divided between them until there was nothing left.

The Polish Crown Jewels were almost as old as the kingdom itself. According to an inventory performed in 1633, the collection was stored in five chests and included multiple crowns, scepters, chains, and swords made for various occasions and for different iconic historical figures. In 1794, the treasure fell into the hands of the Prussians, who transported it to Berlin. The eventual fate of the Polish Crown Jewels is anything but glorious – they were melted for their gold in 1809. Only a ceremonial sword known as the Szczerbiec survived and is currently on display in Krakow. 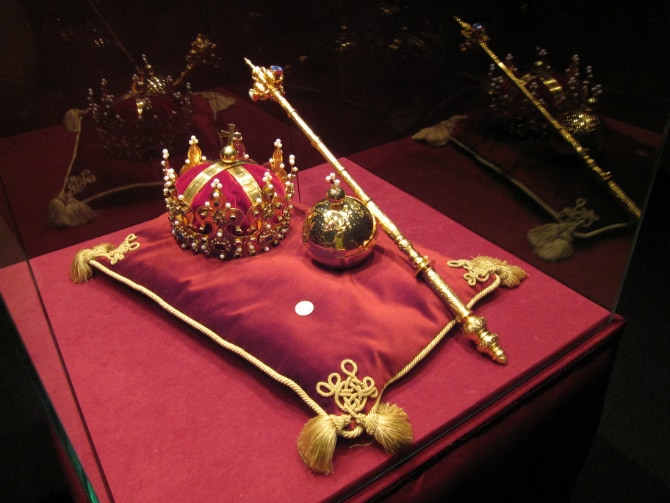 4. The Concert by Johannes Vermeer

Due to their fragile nature, countless priceless works of art have been lost or destroyed over the centuries and – plenty have been stolen. Even the legendary Mona Lisa was stolen (and thankfully soon recovered) hundred years ago. Today, the most valuable painting still unrecovered is The Concert, by the Dutch master Johannes Vermeer.

The beautiful work, which depicts a man and two women playing music, was stolen in 1990 from the Isabella Stewart Gardner Museum in Boston, Massachusetts, alongside many more masterpieces worth a staggering total of $500 million. Of these, The Concert is the most valuable, estimated to be worth around $200 million. Almost 25 years later, none of the works have been recovered. 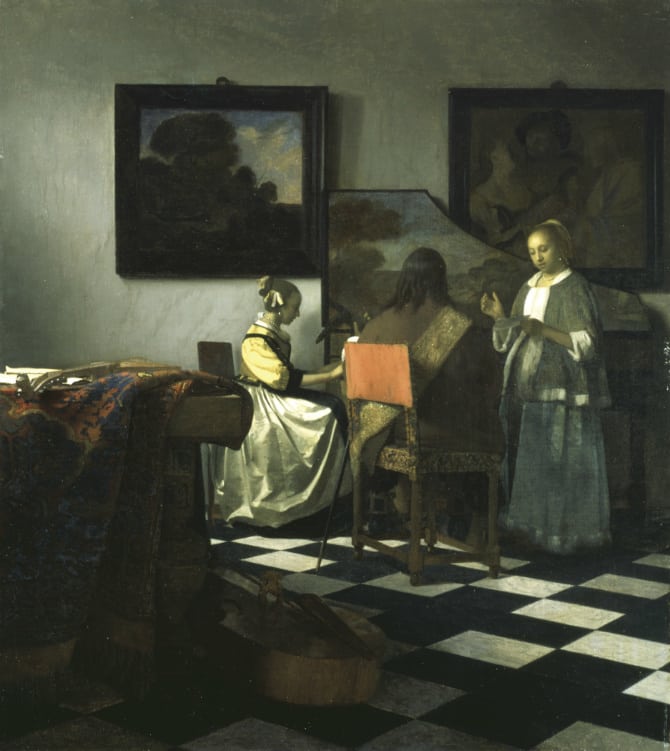 The Amber Room’s splendor is the stuff of legends. Created by the Prussian King Friedrich I in the early 1700s, it remained part of the Berlin City Palace until 1716, when it was given as a gift by the new king, Friedrich Wilhelm I, to his ally, Tsar Peter the Great of Russia. The Amber Room was so mesmerizingly beautiful that, in its time, it was considered the Eighth Wonder of the World. After the renovations and modifications required to fit in its new home at the imperial palace in Tsarskoye Selo (near Saint Petersburg), the room covered about 180 square-feet and contained a staggering six tons of amber and other semi-precious stones, with the amber panels being backed with gold leaf.

The original, which was estimated to be worth around $150 million in today’s money, was dismantled by the Nazis during World War II and subsequently lost in the chaos of the conflict. A reconstruction, started in 1979 and completed in 2003 (which cost “only” $11 million) can be currently seen at Tsarskoye Selo. 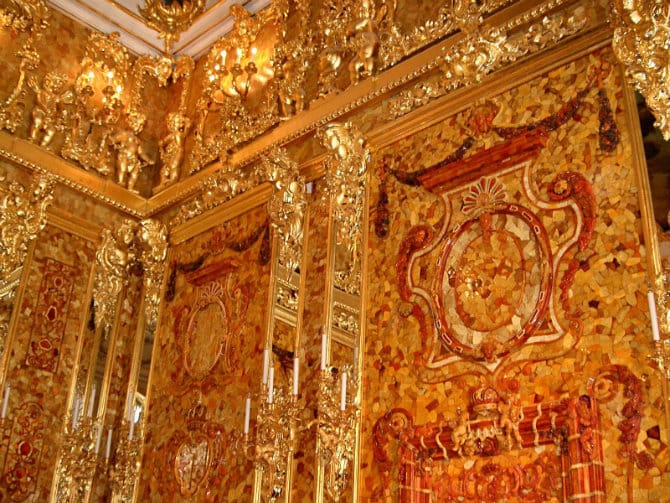 2. Treasure of the Copper Scroll

The Dead Sea Scrolls are some of the most intriguing documents ever discovered. Discovered almost 70 years ago by teenage shepherds, the scrolls are of great cultural significance as they include the earliest known biblical manuscripts. Well, that, and sort of treasure map which could make anyone who deciphers it a billionaire.

While most of the text is written of parchment and papyrus, there’s a single copper scroll with instructions on how to find treasures scattered all over Judaea (perhaps this material was used precisely because it not as fragile as are those used for the other writings – and when you’re writing about stuff this valuable, it’s important!). The scroll assumes the reader was very familiar with the area as it contains obscure references (phrases like “in the cave of the old washer’s chamber, on the third terrace”), which makes it virtually impossible for modern day archaeologists and explorers to follow.

None of the treasure, with a total worth estimated in the billions of dollars, has ever been found. While it’s plausible that it was that well hidden, there’s also the possibility that it was obtained by the Romans when they pillaged the area during the first century CE. 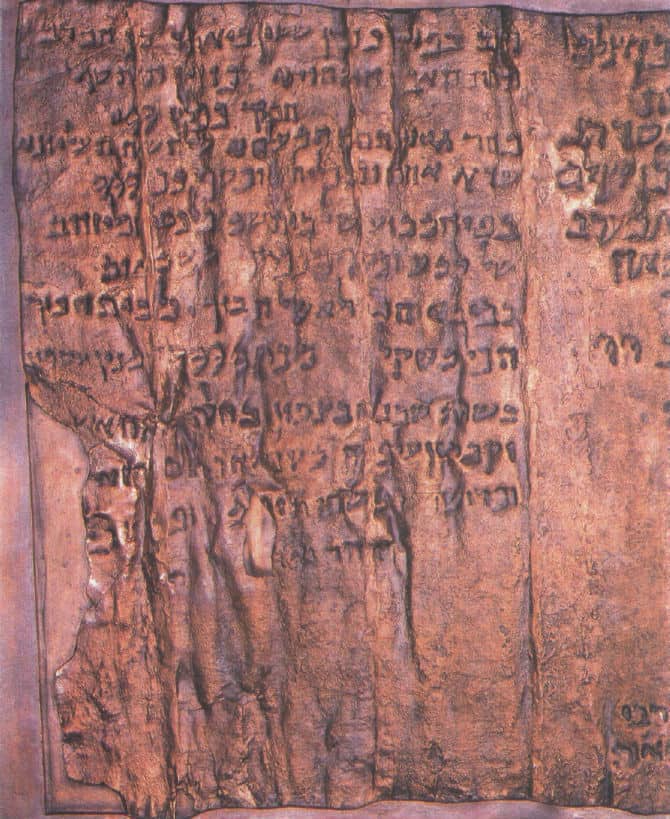 When the Conquistadors arrived in the New World about 500 years ago, they were shocked by how rich the local kingdoms were. Before these locals knew what hit them, small but determined (and technologically superior) groups of Spaniards started looting and conquering the area (the word conquistador literally means conqueror).

Francisco Pizarro led such a group to modern-day Peru, to the Inca Empire led by Atahualpa. Though heavily outnumbered, Francisco Pizzaro and his men managed to get the upper hand through the use of such newfangled military equipment as firearms and horses. Atahualpa was captured in an ambush and offered to pay (literally) a room full of gold and twice the amount in silver for his release, but was executed before the deal could be completed. For centuries now, people have been searching for the vast treasure assembled by the Inca to ransom their king, but save for a few items, nothing substantial has ever been found. 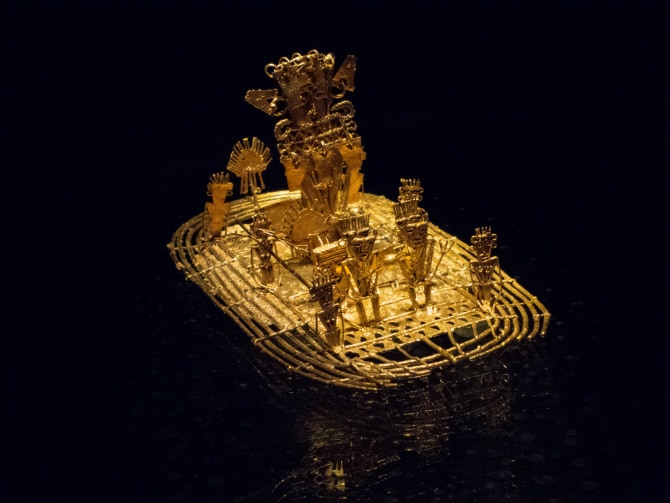