The Top 10 Most Expensive Diecast Cars in the World

Toys. We all love them, don’t we? Some might think that when we grow up the toys we used to have an affection for in our childhood pass into oblivion, but that’s not always the case. Some of us still fancy those toys even as grownups, and for a few out there, they’ve become more than just toys. They’ve become an investment, an extravagant piece of art.

The most respected among all those toys are probably cars. Cars are a big thing in today’s society, but more surprising than that is that some model cars are an even bigger thing than their real counterparts.

They come in all kinds of sizes with all kinds of stories and for a variety of prices. The most sought after are obviously the most exclusive, the rarest of them all, but they come with a price. A huge one.

Here are the Top 10 Most Expensive Diecast Cars in the World:

Introduced in 1953, Matchbox is a very popular toy brand. Their Matchbox series is one the most known collections, out of which, one particular toy made it to this list. It’s no. 30, the 1967 Magirus Deutz Crane, a diecast model that probably costed no more than $10 back in the days. Today, it’s value has increased to an unbelievable $13,000. 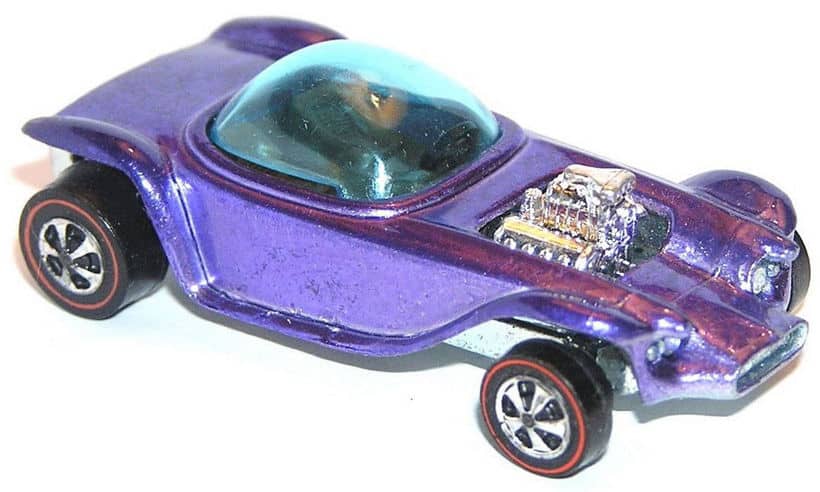 Hot Wheels is another very well known brand of toys and a past competitor of Matchbox. Their diecast scale models were built after the original design blueprints of the specific automobile manufacturers.

The first series to come out of their assembly line was called The Original Sweet 16 and one of the first cars they decided to reproduce was Ed “Big Daddy” Roth’s concept car that featured a joystick instead of a steering wheel and a dome over the driver’s seat. It was called the Beatnik Bandit.

Everyone knows that the cars are a boys’ territory, right? Well, the company tried to get the girls interest in toy cars as well by creating a pink version of the Beatnik Bandit. It didn’t work, at least not with the girls. It works right now with collectors all around the world, since this rare model is one of the most sought-after diecast cars and its value is $15,000. 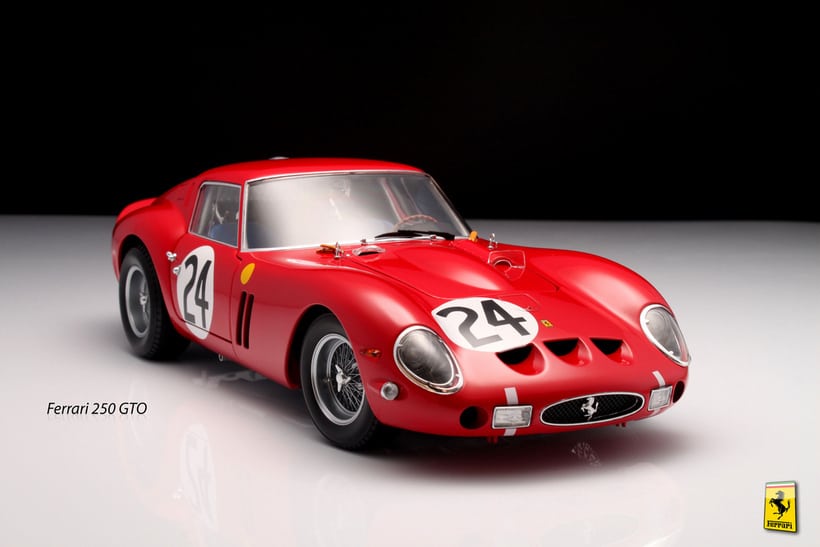 The Classic Model Cars USA company marvelously crafted a 1962 Ferrari 250 GTO, which is one of the most admired car models in the world, both real or diecast. CMC has captured all those tiny impressive details from the real car and excellently reshaped them at 1:18 scale.

The exceptional clarity of the windows, the wipers with multiple parts and rubber blades, the super-thin sliding side windows, the interior with its leather harnesses, real cloth seats and metal roll cage, detailed steering wheel and instruments, plus all the lovely details from the engine, the suspension and transmission system make this diecast Ferrari a model to be adorned by many.

The only one in existence nowadays as far as anyone knows, the Dinky Pre-war No.22D Delivery Van ‘W.E. Boyce’ is a very special item among collectors. Dinky began its existence in 1934 and sold the cars as accessories for the railway kits. This particular model was sold at an auction for a little over $26,000. 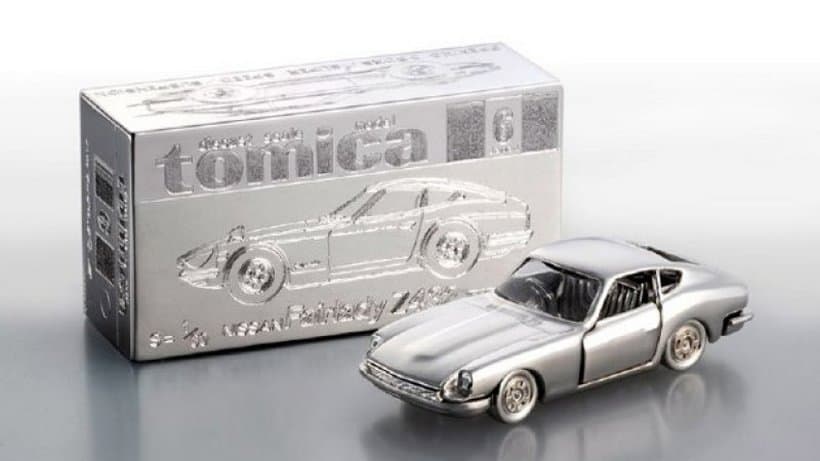 In 1970, the Japanese company Takara Tomy created Tomica, a line of model cars. For their 40th anniversary, the jeweler Ginza Tanaka created something truly special: a platinum replica of the Tomica Nissan Fairlady Z432. It’s handmade and it took the designer one month to create it. The price? A sky-high $80,000. 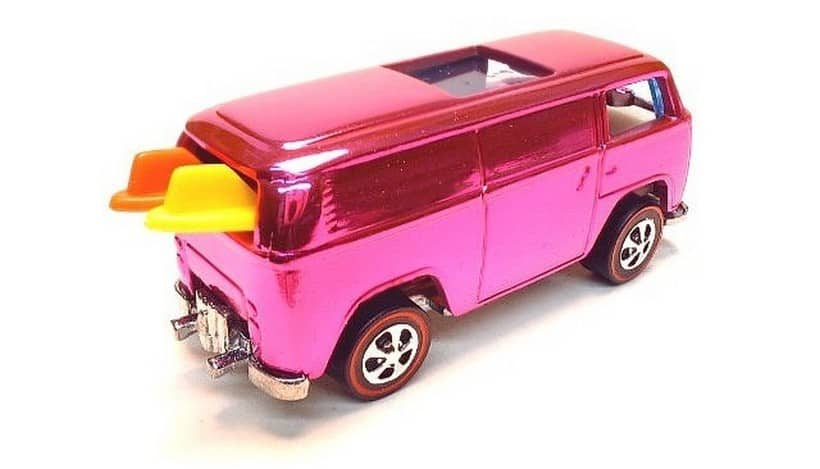 The 1969 Volkswagen Beach Bomb is the Holy Grail for Hot Wheels collectors. Especially the Rear Loading Pink version, since it was a prototype and just a small unknown number of them were ever made and given to the employees for testing.

The prototype had troubles when it was used with the play sets and stunt track sets back in the days of the Hot Wheels era so it had to be modified. The production version was the Side Loader Beach Bomb.

Due to its scarcity, The Rear-Loading Pink version has a price tag of $125,000. Yes, it’s a piece of metal that probably costs more than your real car. 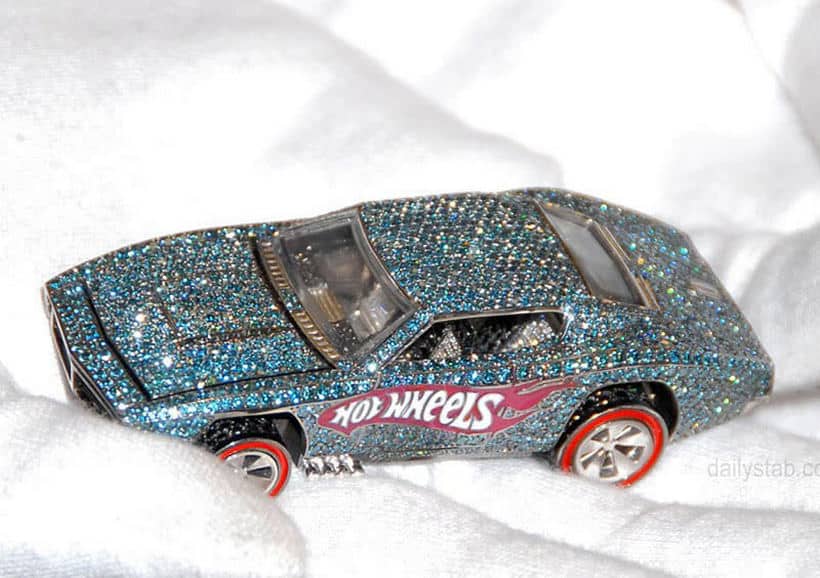 Another 40th anniversary, another jeweler, this time from Beverly Hills, and another diecast car model, a Hot Wheels. Mattel, the company behind the brand, decided to create a one of a kind model car for their 40th birthday.

So they hired celebrity jeweler Jason Arasheben to cover a Custom Otto model car with 1388 blue diamonds, 988 black diamonds, 319 white diamonds and 8 rubies and some 18 kt white gold. The result after over 600 hours of painstaking attention to the tiniest of details? A $140,000 Hot Wheels diecast car. 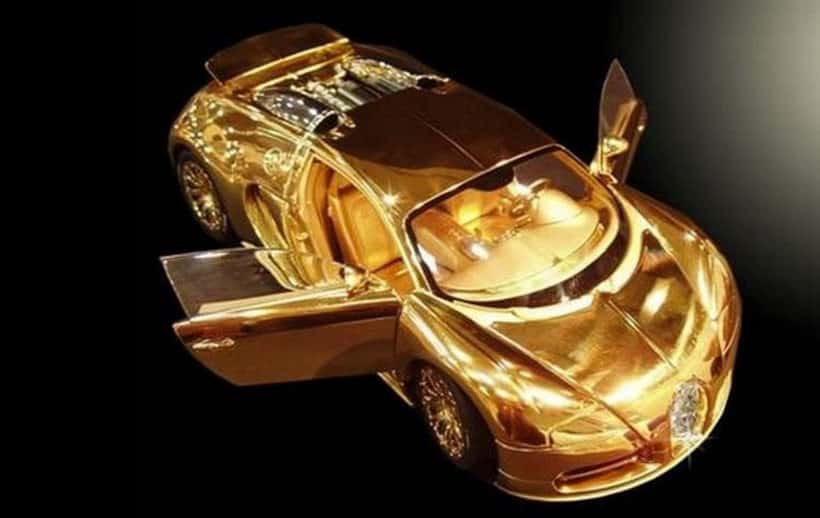 If you think that the prices in this list so far were shocking, what about a $2.9 million Bugatti Veyron model that costs more than the real car? Damn right! Outrageous.

Crafted by respected luxury designers Robert Gulpen and Stuart Hughes out 24 kt gold and platinum and encrusted with a 7.2 kt single cut flawless diamond, this tiny Bugatti Veyron took two months to complete. It’s available in limited edition since only three pieces of this gold bar on wheels were created. 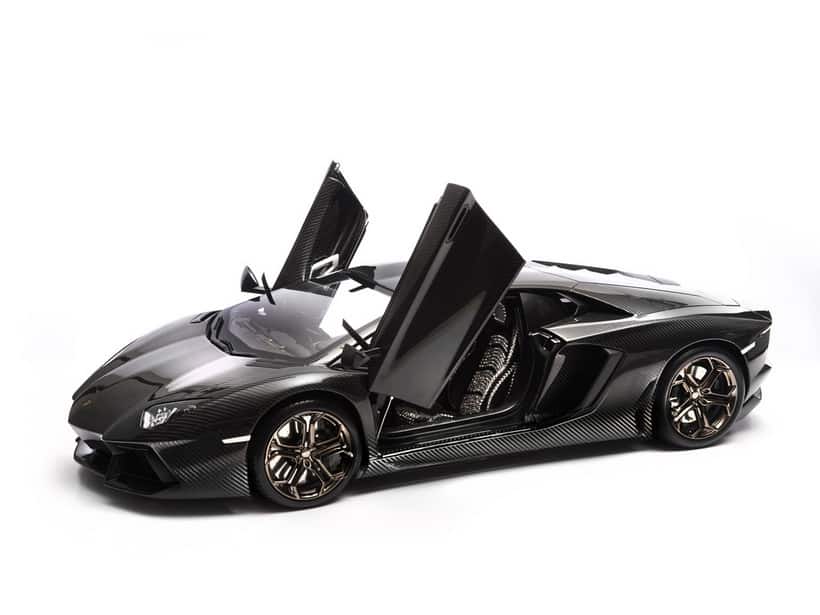 The race for the most expensive diecast car is one to rise ambitions for the most crazy creators and designers around the world. Robert Gulpen Engineering crafted a 1:8 scale Lamborghini Aventador that’s an exact replica of the real car both inside and outside. 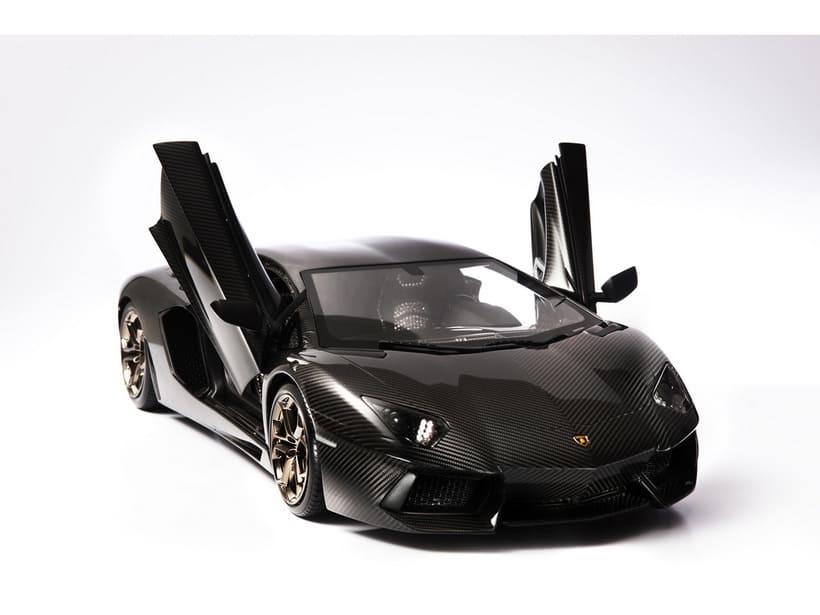 The model car is a combination of the most expensive materials you could find. The body is made from carbon with an ultra thin thread of gold wrapping its fibers. The wheels are a mix of gold and platinum and the seats are bedecked with precious stones. The headlights are crafted from clear diamonds and the rear lights are colored precious stones. 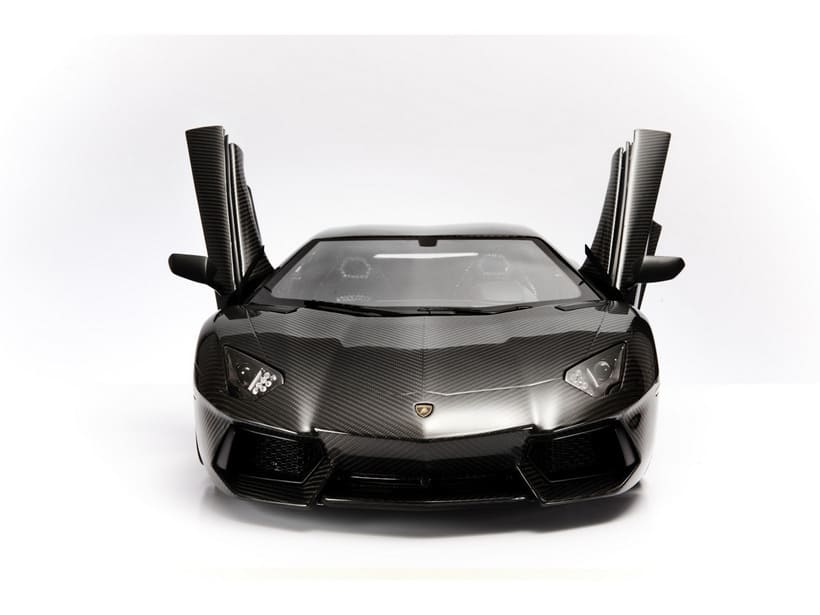 What else could you wish for those $6 million that the model costs? Twelve real Aventadors maybe? 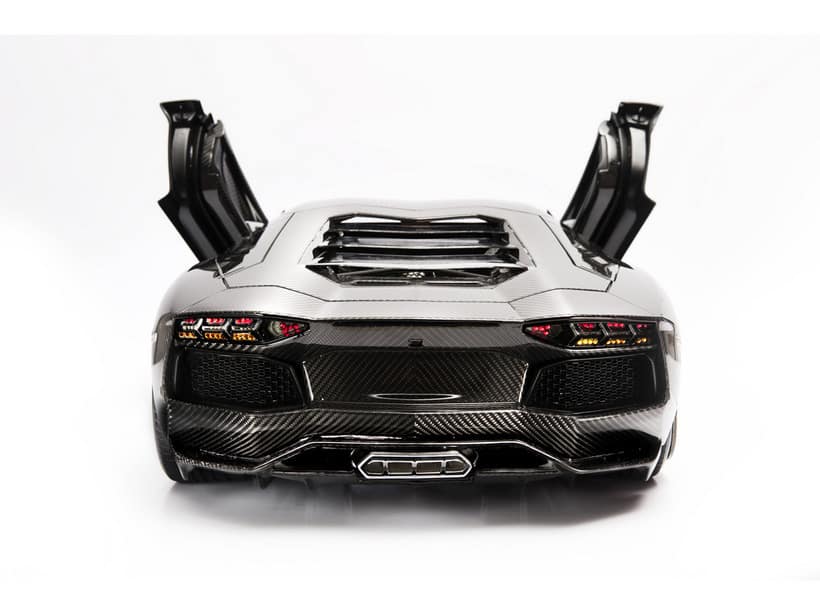 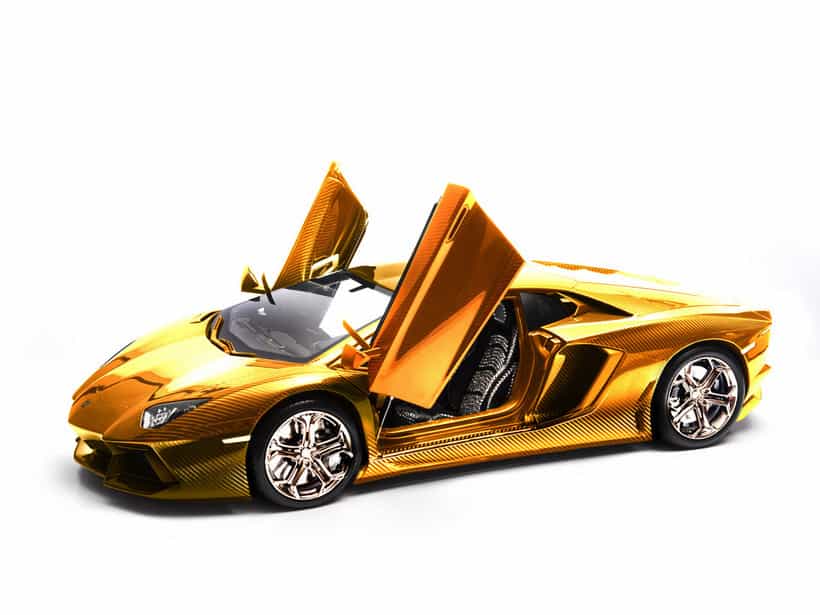 If that wasn’t enough, there’s another diecast Aventador out there, one completely wrapped in gold, created of course by the same mind that’s behind the carbon model. 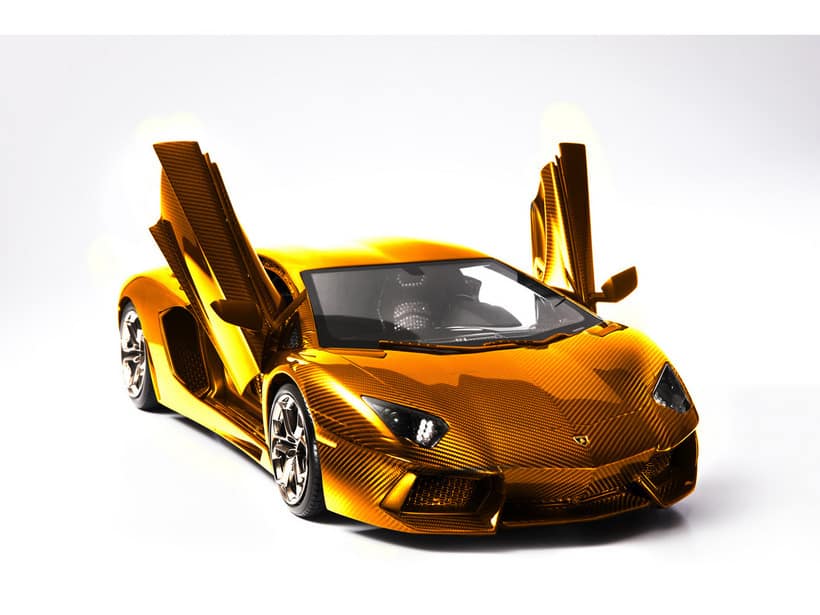 For the price of the gold version you could buy 18 real, 700 horse powered Aventadors with which you could have a lot of fun driving. That would be $7.5 million. 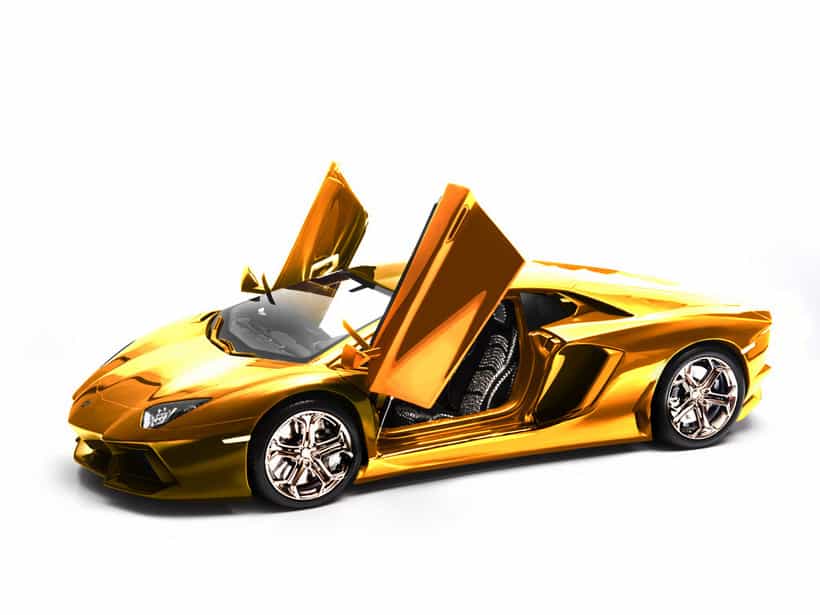 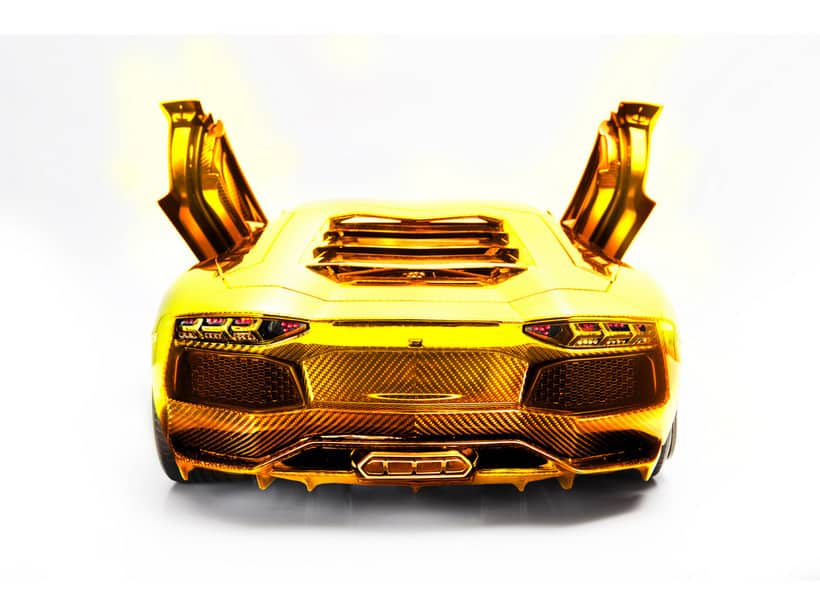 Tags:
Previous Article
The Top 10 Most Expensive Pens Ever Made
Next Article
Inkaterra La Casona Takes You to Another World