The 10 Most Ridiculous Things Bought by Celebrities

Being rich and famous gives you the possibility to indulge even your hidden pleasures, spending big bucks for just about anything you could think of, from everyday items to extravagant things that may seem extreme to others. Money talks, and celebrities love to spoil themselves with frivolous purchases, throwing millions for ridiculous things.

Nicholas Cage for example, is known for his crazy buys, spending $275,000 for an octopus and two king cobras, plus a dinosaur skull worth just as much, but he’s not the only one who loves to throw money around in this manner. Today we’ll take a look at some of the most insane and ridiculous things bought by celebrities, that will surely amaze you. 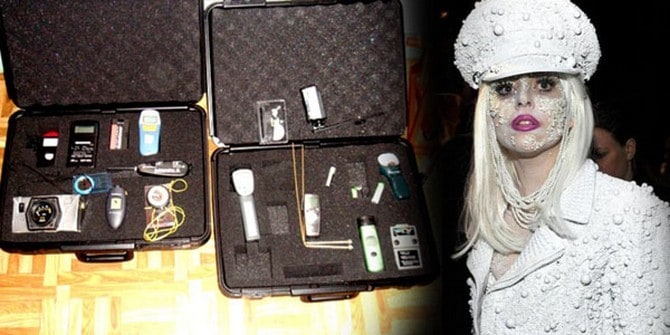 Lady Gaga has bodyguards to protect her from unwanted attention all the time, but they can’t do anything when it comes to spirits from other worlds. She claims to see ghosts and these superstitions led her to hire even ghost busters (not the ones from the movie) and paranormal experts who also advised her to buy an Electro-Magnetic Field Reader, that they claim will help detect the ghosts. The device is worth $50,000 since she wanted the best of the best.

9. Bono’s plane ticket for the hat 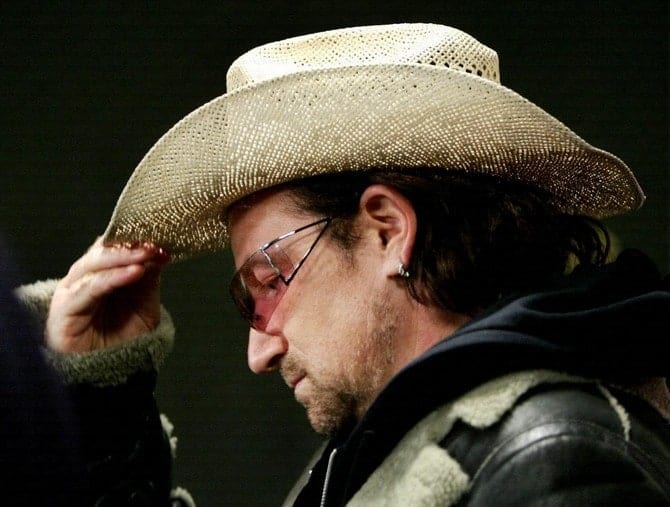 Can you go on vacation without your favorite hat? You’ll probably need it if it rains where you go. Bono went to extreme measures to take his favorite hat on vacation and spent $1,700 for a plane ticket for his hat since it only travels first class and needs the traveling insurance. Sure, this first class plane ticket might seem just a small thing compared to other purchases in this list, but still Bono could have used the money for something more worthwhile. 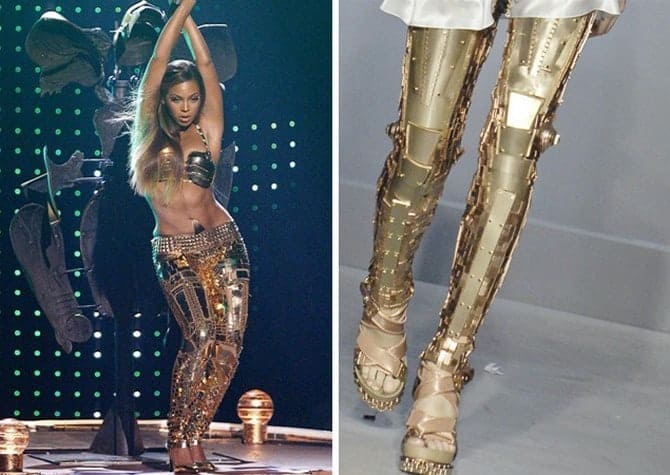 A couple of years ago, the famous singer bought her husband a private jet valued at $50 million, but at least that helps the couple get faster to their gigs. These eye catching Balenciaga leggings win the prize for the most useless buy from Beyonce because since she paid $100,000 for them. They are gold embellished and she performed in them only at the BET Awards in 2007.

7. Jay Z and his champagne bottles 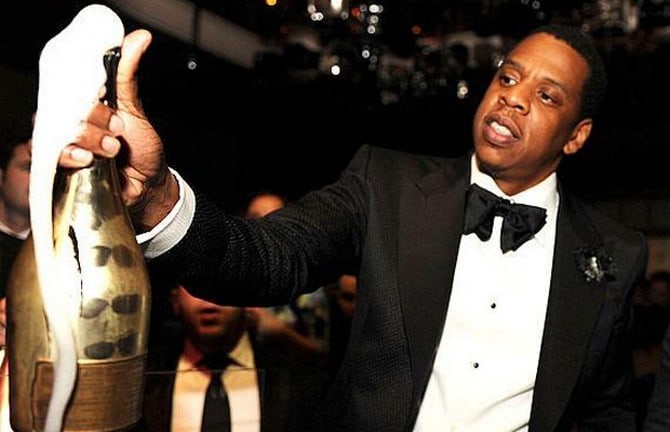 Jay-Z is certainly a perfect match for Beyonce, even when it comes to absurd expenses. One of the most extreme escapes was when he ended his contract with the Cristal champagne brand. He chose to replace Cristal with Armand de Brignac, known by connoisseurs as the “Ace of Spades” and while at a party in Club Liv, Miami, he bought 75 bottles for $250,000 leaving a $50,000 tip to the lucky bartenders. Jay-Z liked this champagne band so much that he ended up buying it last year. 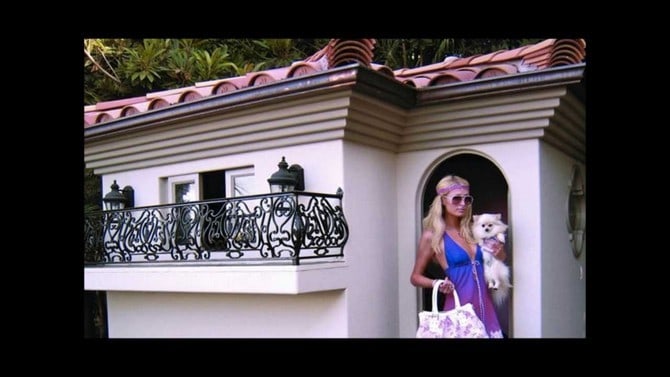 Back in 2009, Paris Hilton paid no less than $325,000 for a custom designer dog house which replicated her own home, complete with all the mini designer furniture, heating, air conditioning and the chandelier as well. Although she always carries the dog with her this doesn’t mean that the dog doesn’t need a home, right? Paris Hilton’s dog is certainly doing a lot better than most of the people on the planet. 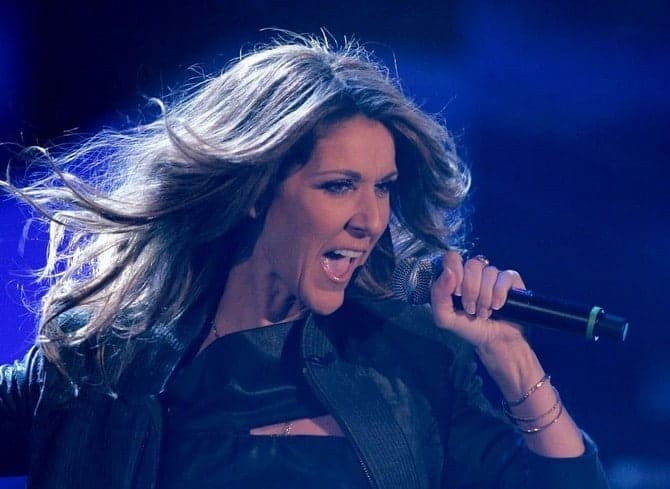 We know that Celine Dion’s amazing voice is unique but the extremes she goes to in order to protect her voice are something else. To pamper her vocal cords while training them, she needed a humidifier. This is not out of the ordinary, since you can find a good one for somewhere around $200 but she chose to pay no less than $2 million for one that probably does the exact same thing. Who knows? Maybe she was charged extra for being a celebrity. Celine Dion has other ridiculous expenses, like paying $4 million a year for her team which is comprised of four bodyguards, a yoga teacher and an Olympic trainer. 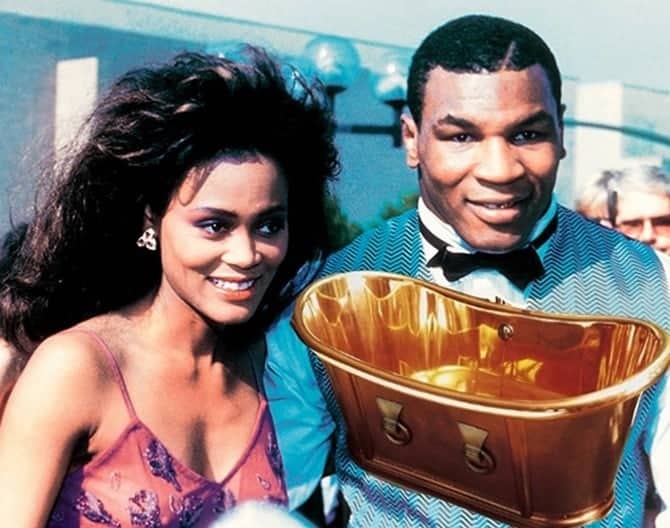 Mike Tyson offered his former wife Robin Givens a solid gold bathtub worth $2 million in 2004 while he was close to being bankrupt in the same time. The solid 24-karat gold bathtub wasn’t the only extreme thing he bought since he later spent $150,000 for two white Bengal tigers. Taking care of two bengal tigers costs close to $4,000 each month and Tyson himself admitted that when it comes to his spending habits “there was some dumb sh**.” 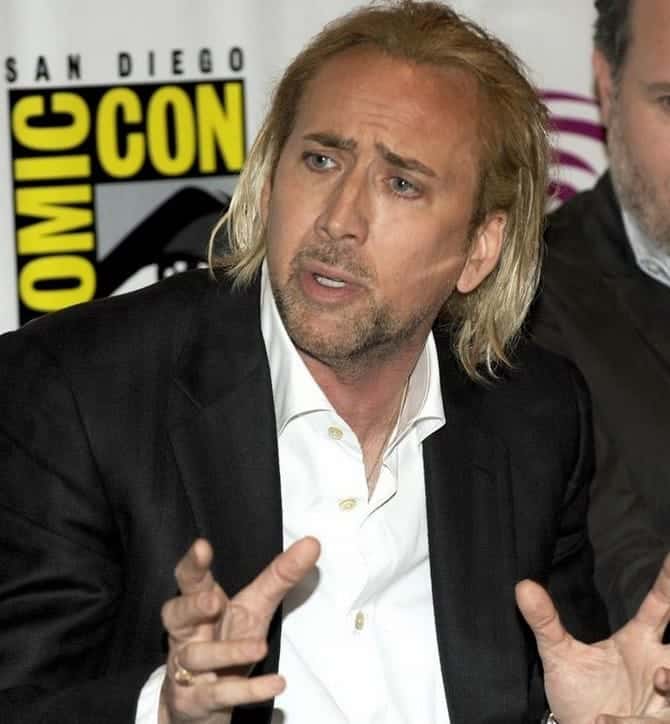 Nicolas Cage loves to throw money on outrageous things, owning two yachts, 50 exotic cars, 12 mansions, a Gulfstream jet, a 28-room Bavarian castle, two islands in the Bahamas and even something as extreme as a collection of shrunken heads, because you never know when you’ll need one. He bought a Lamborghini owned by the Iranian shah a while ago and he went into a bidding competition with Leonardo Dicaprio for a dinosaur skull in 2007. But his most ridiculous purchase has to be the comic book collection for which he paid over $1 million and it was later on stolen. He managed to recover the collection and he even got a nice profit out of it, selling it for $2.1 million. The comic book collection included the first number of Action Comics, the place where Superman made his first appearance.

2. Kim Basinger and her own town 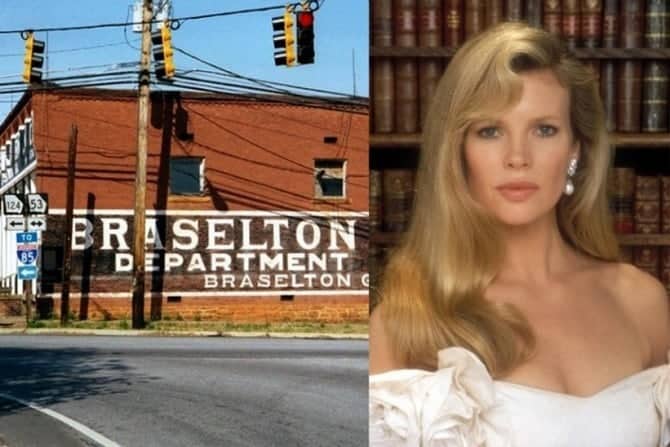 In 1989, Kim wanted to transform the town of Braselton, Georgia into her own tourist attraction with movie studios and large film festivals, so she paid no less than $20 million to purchase it in its entirety. She claims to have become interested in the town while she was stuck in a traffic jam. After one and a half years of negotiating she paid the whole sum in cash and bought the 1,600 acres that covered the town. The purchase has proven to be a complete failure and five years later she had to declare bankruptcy and sell the town for just $1 million. 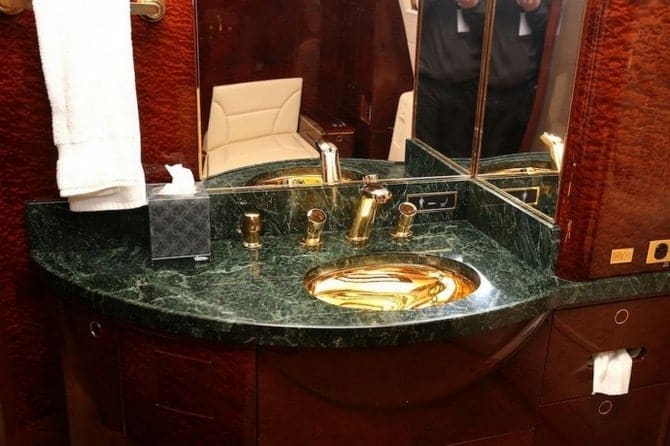 This one is truly extreme and it is just the forte of Mr. Trump, having a private jet where the main material is gold. He bought a Boeing 757 a couple of years ago, the same jet used by presidential candidates, from Microsoft co-founder Paul Allen for a cool $100 million. The jet was then refitted with the latest technology and gold covering almost every surface. The Trump family emblem was plastered onto the jet, just so you don’t get it mixed with other gold plated jets nearby. Even the faucets are kitted out with 24-karat gold, as you can see in the picture.