The 10 Most Expensive Wedding Dresses of All Time

In general, we humans are known to badly want and obsess over things we can’t afford, and you can see that all the time, but more notably when it comes to some of the most important events in our lives, such as weddings.

Now that’s your usual bride we’re talking about, but when it comes to the affluent side of society, the starting price tags for a wedding dress go well into 6 figure sums. Keep on reading if you’re curious to find out which are The 10 Most Expensive Wedding Dresses of All Time: 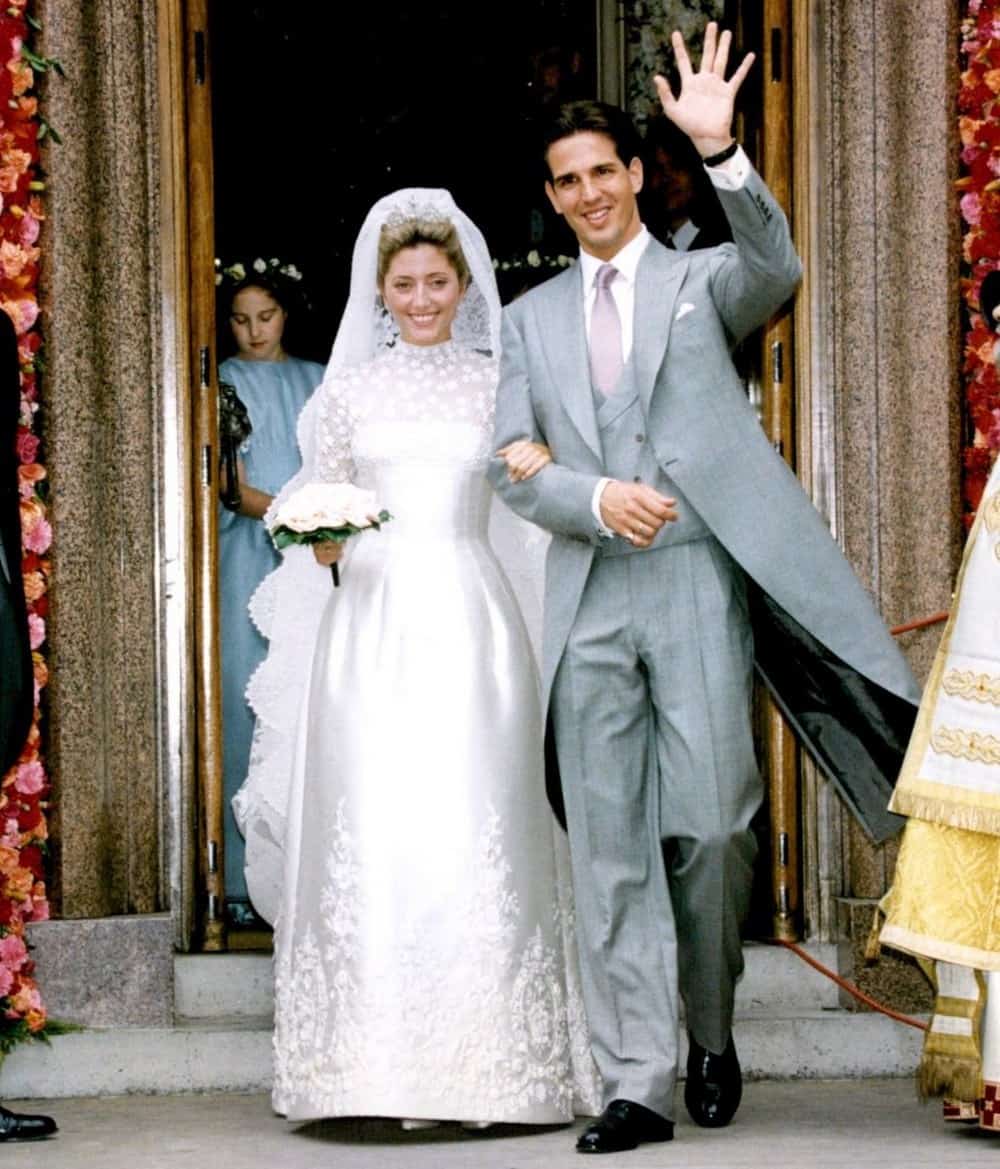 Marie-Chantal Miller, the Crown Princess of Greece, married Prince Pavlos back in 1995 in a true royal style. She wore a custom Valentino wedding dress that turned many heads at the time.

It was a traditional long sleeve dress embellished with pearls and a 14 foot length Chantilly lace train, making Marie look stunning at her wedding. The custom gown took no less than a team of 25 people to complete it and total costs rose to a good $225,000. 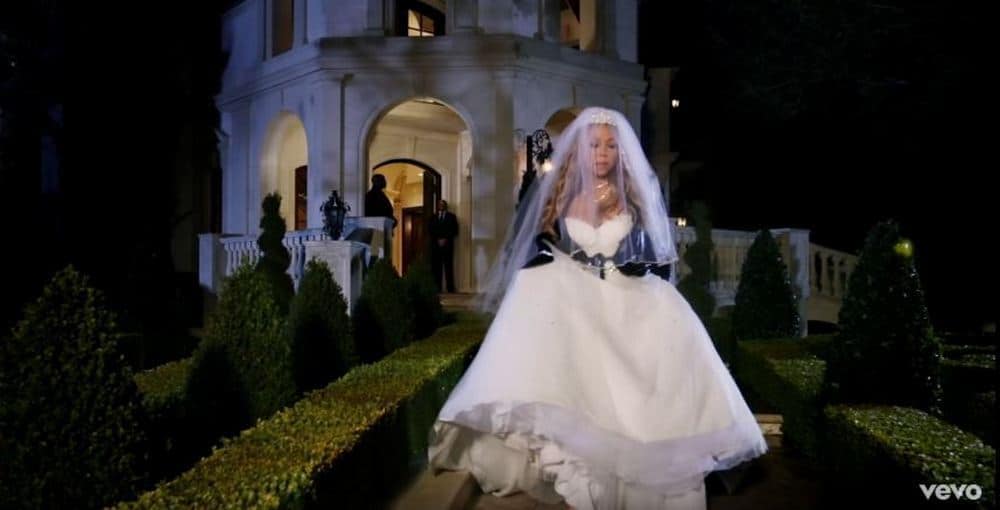 Though Mariah Carey and James Packer broke off their engagement before she could wear her wedding dress down the aisle on the big day, she still spent a huge load of money on it.

The Valentino gown Mariah Carey was supposed to wear during her wedding cost her no less than $250,000 and ended up in flames in one of her music videos after the breakup. 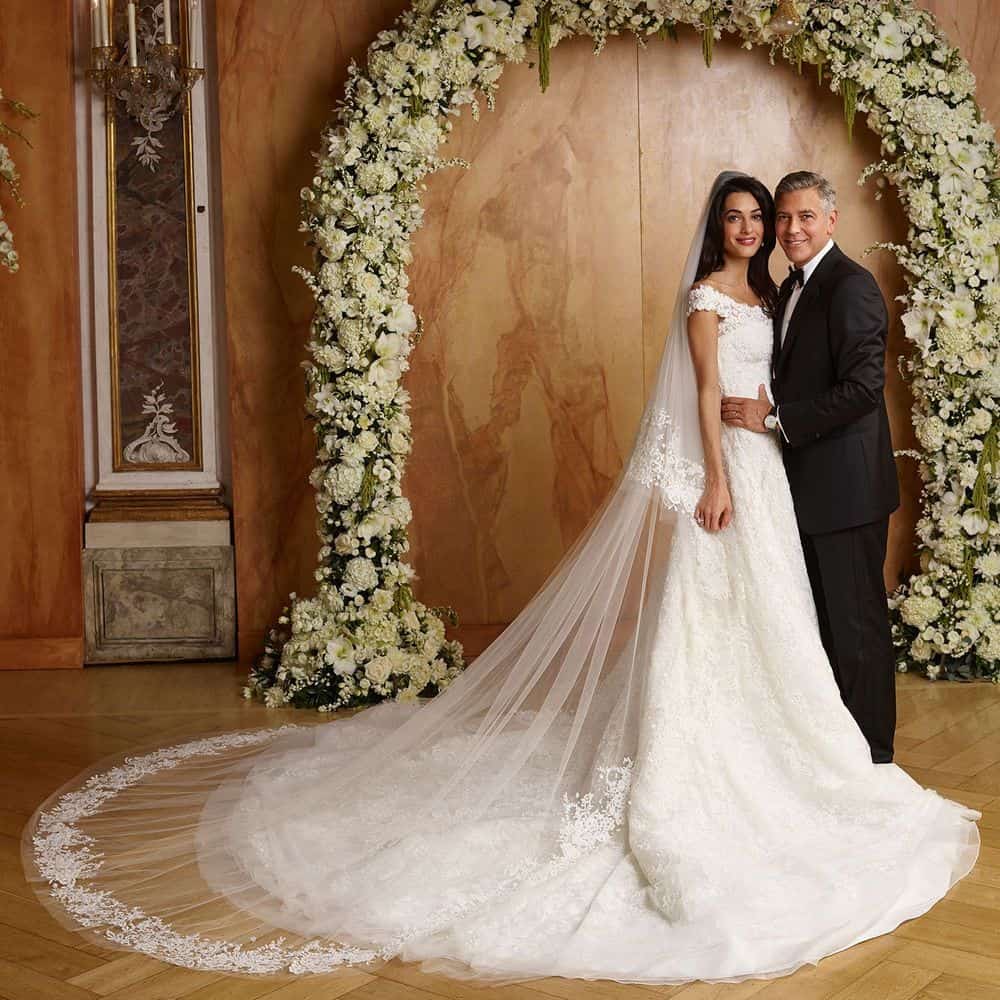 George Clooney’s bride, Amal Alamuddin was spectacular during their wedding ceremony, and part of it goes to the dress she was wearing, a custom made Oscar de la Renta gown, the last wedding dress created before its designer passed away.

Amal’s wedding dress gained huge notoriety afterwards and was even featured in an Oscar de la Renta exhibit at the Museum of Fine Arts. The dress costed the couple a good $380,000. 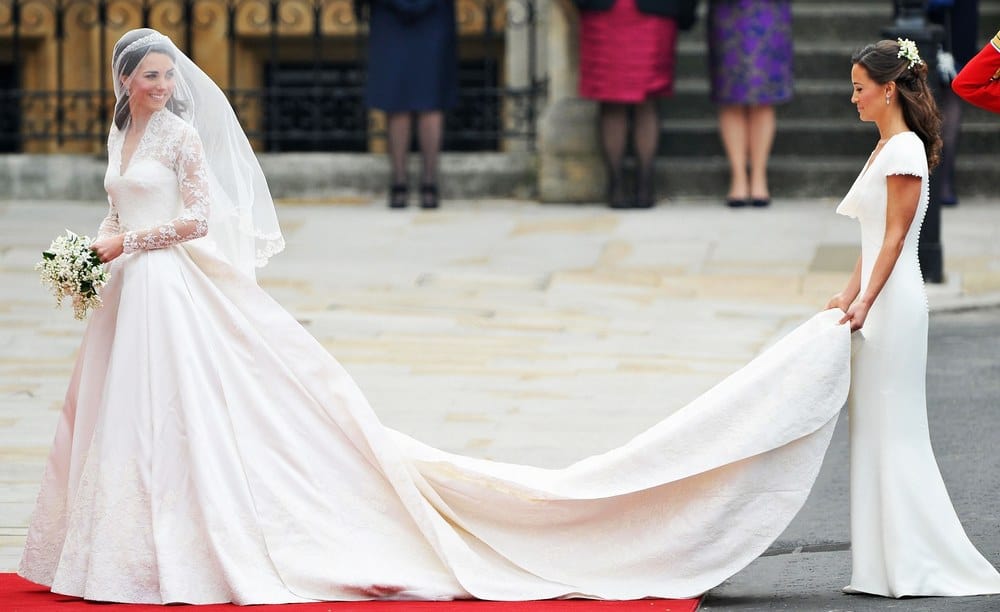 Kate Middleton’s royal wedding to Prince William back in 2011 may have spurred a lot of attention, but we have to agree that a lot of it goes to the now duchess and the dress she was wearing, an Alexander McQueen by Sarah Burton.

The dress was indeed fit for a royal wedding and featured a narrow waist, long lace sleeves, full skirt and a 9 feet long train. The price tag of Kate’s wedding dress rose to $388,000. 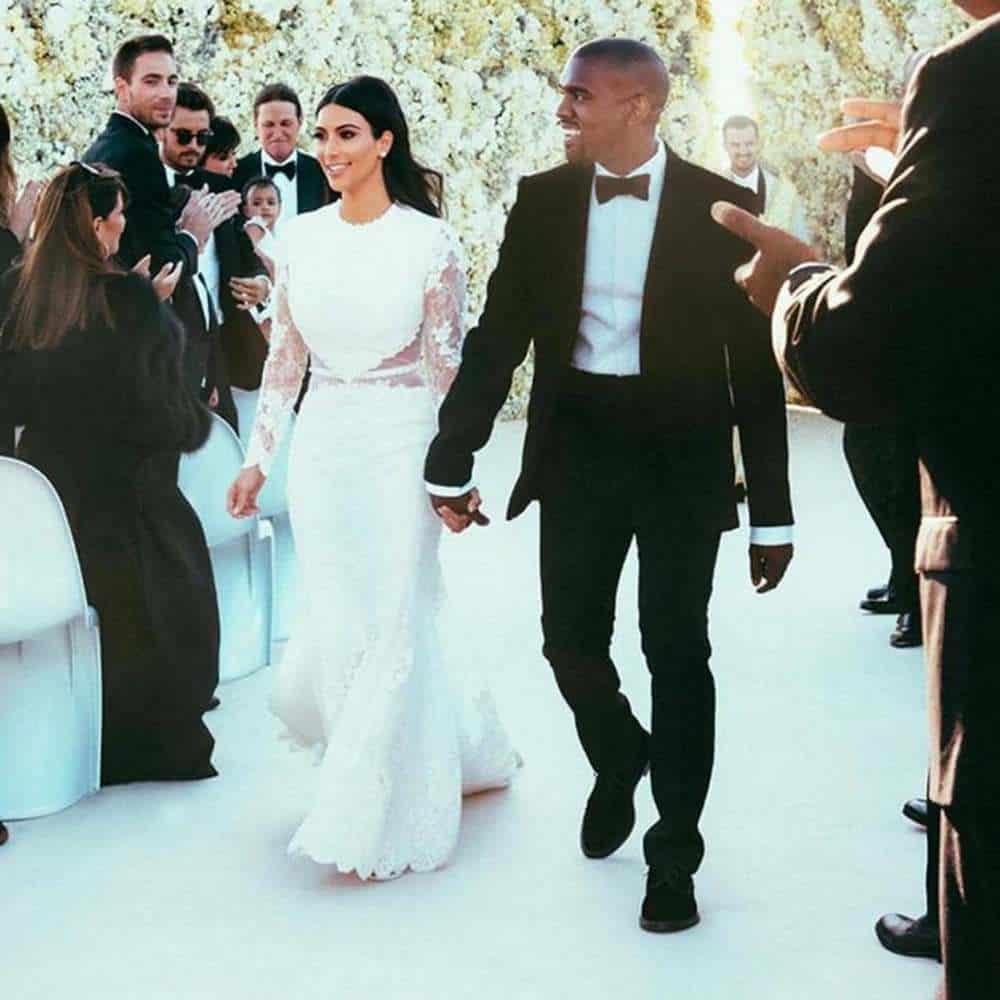 As Kim Kardashian has proved at her wedding back in 2014, you don’t need to be a royal to have a super expensive wedding dress. Her dress, a custom made Givenchy gown by Ricardo Tisci, upped the game with a price tag of no less than $500,000.

But that’s something normal when you think of Kim Kardashian and her inability to keep things simple in her wardrobe. 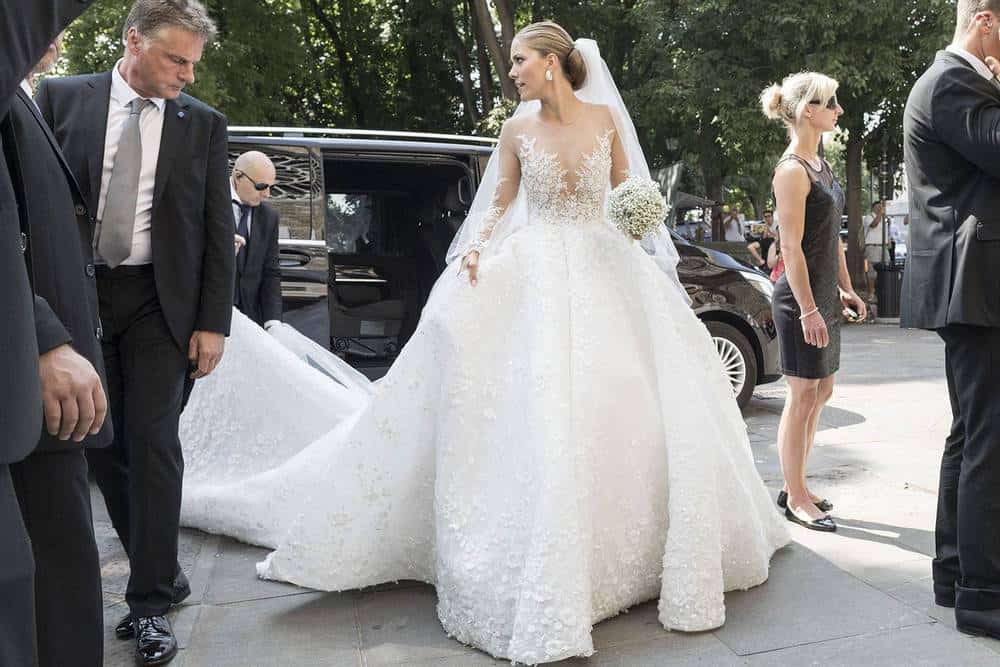 As most of you might expect, the Australian singer and crystal heiress Victoria Swarovski went overboard with her 500,000 embedded crystals dress and upped her wedding gown price to the mark of $1 million.

Yes, it’s one of the most expensive wedding dresses of all time, and yes, she could have done with a lot less crystals than the ostentatious 500,000, but that’s what happens when your name is Swarovski. 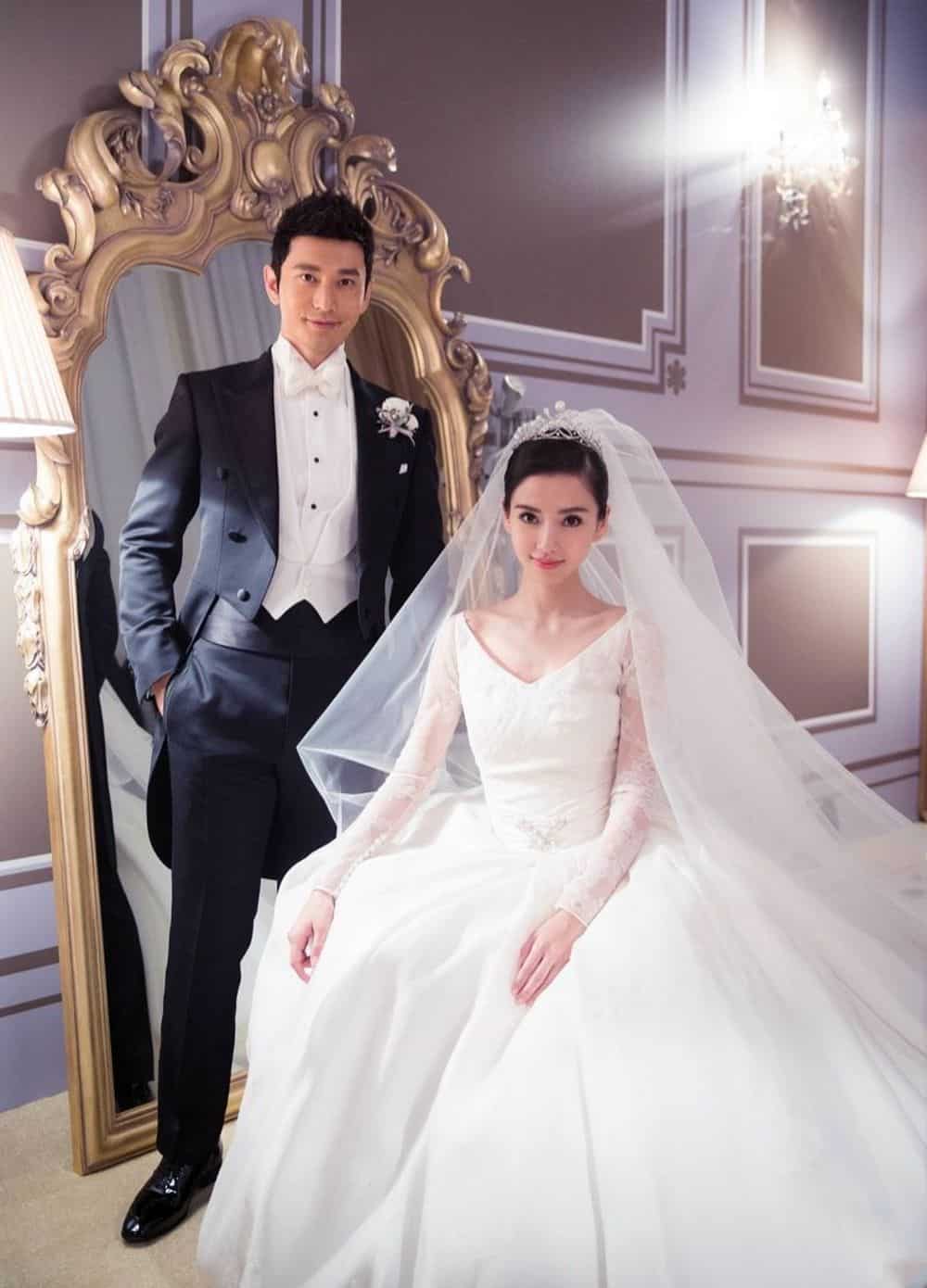 One of Hong Kong’s most renowned person in the entertainment industry, the model, actress and singer Angela Yeung Wing, or better known as Angelababy, had her wedding in 2015.

During the event, she wore a custom Dior dress that took designers almost five months to complete. It was created out of 115 feet of ivory satin organza and 165 feet of tulle with a 10 foot long train, so it’s no wonder the whole dress was evaluated at around $1.5 million. The cost isn’t official, but when your entire wedding bill rose to $31 million, your dress wouldn’t score too low for sure. 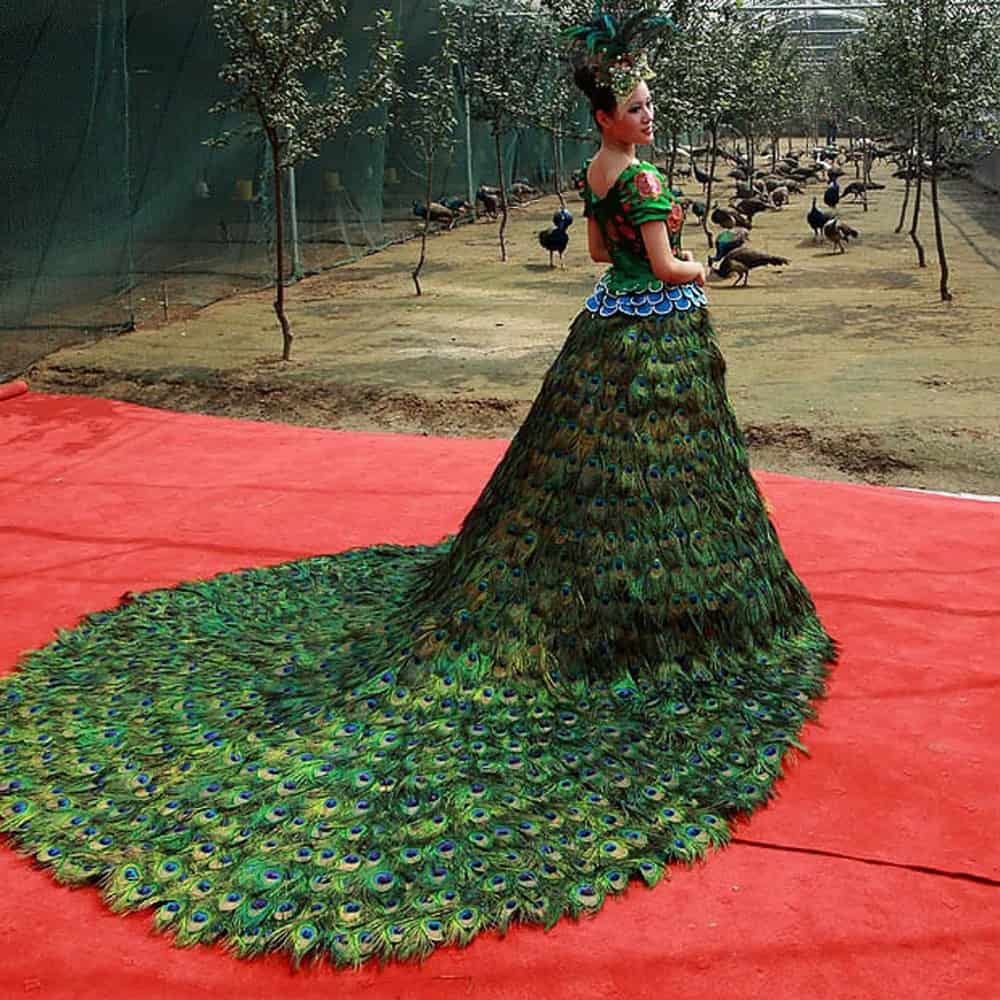 Hand sewn from more than 2,000 peacock feathers, this wedding dress, created by renown fashion designer Vera Wong, took the creators eight months to complete. The wedding dress was revealed at a wedding expo in Nanjing, the capital of China’s Jiangsu Province.

Beside the impressive aesthetic, we couldn’t stop to think what do animal rights activists think of this? It’s known that an average male peacock sheds around 200 feathers each molting season, so probably the creators would have needed to collect the feathers of ten birds over a year long period.

The wedding dress made headlines around the world, and we guess it was for both its uniqueness and price tag of $1.5 million and an animal rights point of view. 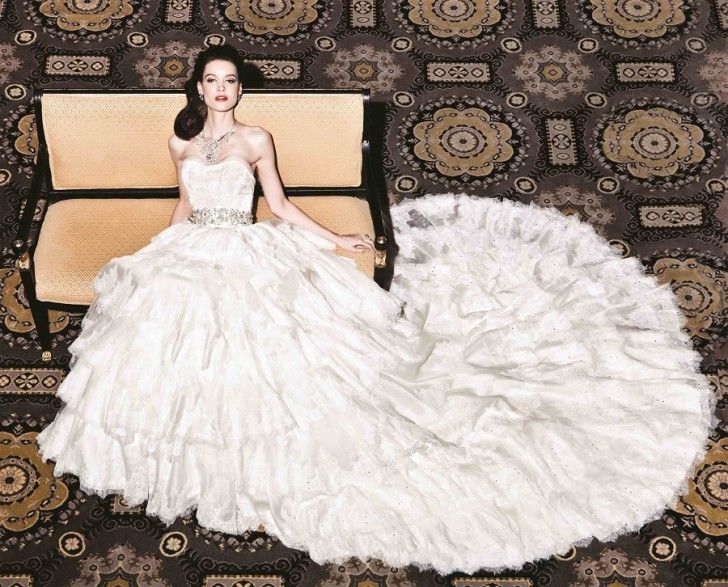 Renown Japanese designer Yumi Katsura created what’s one of the most expensive wedding dresses ever seen. The silk-satin gown is embellished with zari-embroidery, no less than 1,000 pearls, a 5 carat gold diamond and a green 8.8 carat diamond emblem.

There are only two dresses like this in the whole world and each comes with a hefty price tag of $8.5 million. 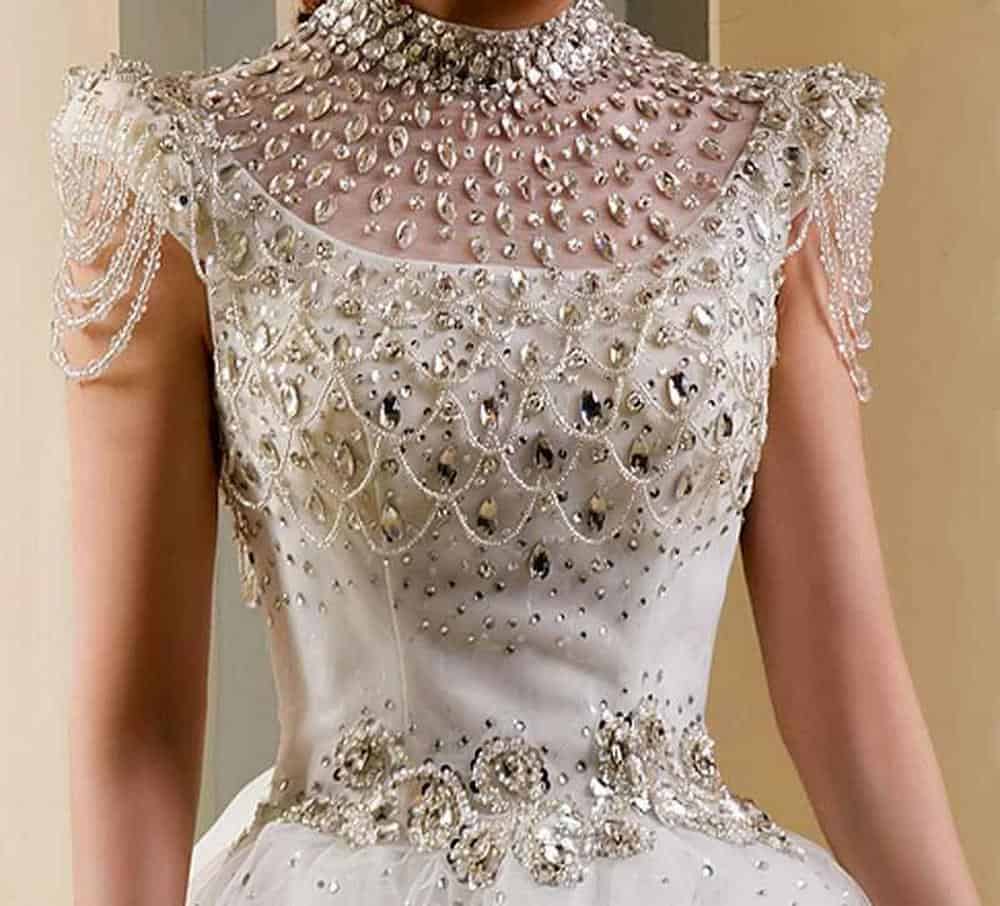 The ever popular Beverly Hills designers Renee Strauss and Martin Kratz, have managed to create the most expensive wedding dress to date. Called the Diamond Wedding Gown and priced at the tremendous sum of $12 million, the designers didn’t rush to sell it, but instead they are using it to promote their designs at bridal exhibitions and luxury fashion shows.

Sure, the price is astronomical, compared to the other wedding dresses on this list, but the interesting part of the gown is that it was designed to shine and sparkle when the future lucky bride turns around and moves and the rays of light hit the diamonds.