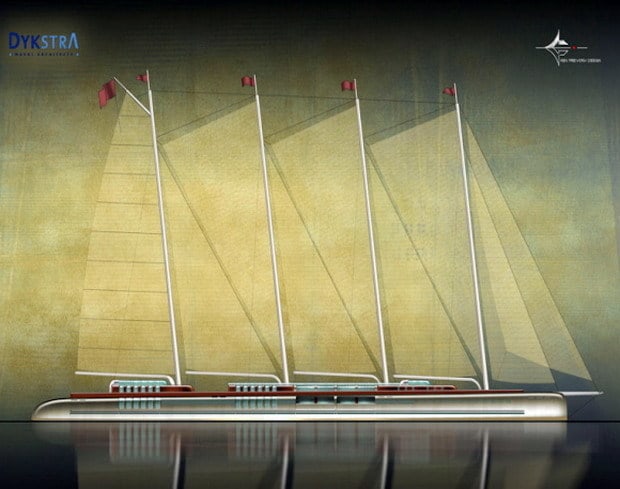 A few weeks ago the Turkey-based Dream Ship Victory signed a contract for a new 141-metre sailer which will become the largest sailing superyacht in the world. The largest sailer at the moment is the Maltese Falcon and for the new Dream Ship the same team that designed the Maltese, the naval architects Dykstra & Partners and Ken Freivokh Design will be contracted.

The new Dream Ship will be constructed entirely of wood and will boast four masts, one more than the Maltese, but it won’t be as high tech as it’s “competitor”. An initial concept of the new behemoth was showcased on the Dykstra & Partners stand at the Monaco Yacht Show and the construction is set to start in 2011.

It will be a real challenge for the shipyard because all their other ships are a lot smaller in size but we’ll probably see how they handle it next year. Even though it will be larger than the Maltese, the new Dream Ship sailing superyacht will be a littler slower because of all that wood.