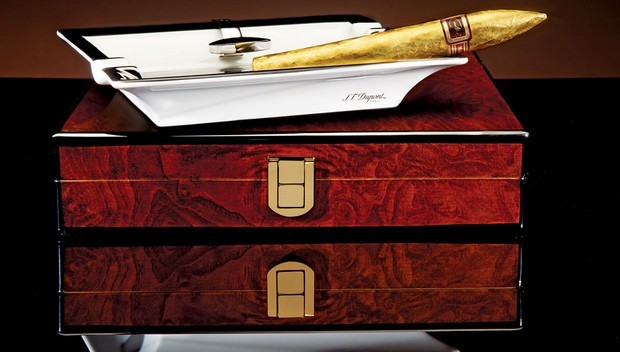 Some say that around 80 percent of the flavor of any cigar is actually given by its wrapping paper. We now present you the opportunity to, sort of, taste gold, in its own sense. Daniel Marshall, renowned cigar maker from California, unveils the 24-carat DM 2 Gold Torpedo, which is mainly a package of cigars wrapped in 24-carat gold leaf.

The manufacture was realized by Giusto Manetti Battiloro, one of the most experienced gold leaf makers in the world, on the aforementioned individual’s idea. It’s a premiere in the world of smokers, while its manufacture is based on wrapping smooth gold leaves around a Red Label Cigar, each cigar taking 45 minutes to process.

In fact, apart from the exquisiteness of its presentation, a tricky part is to actually smoke the cigar. The smoker should take a rather different approach than he does with ordinary cigars, lighting it with a hotter flame, like a butane torch. This is due to the high flashpoint of gold, slower in comparison with the one of the tobacco.

In terms of flavors, the inside is represented by a Nicaraguan puro cigar, with full bodied Jalapa filler blend, rich Cuban seed wrapper aged five years underneath the gold leaf and a lighter Esteli binder. In addition, there is one more catch regarding smoking these one of a kind cigars. Tobacco burns way faster than gold, so this impedes the burn rate of the whole cigar. In conclusion, it requires a lot more puffing, constantly, as well as numerous relightings.

Smoking something as opulent as this will make any connoisseur drool in front of you, being such a marvelous experience to see gold turning into ash right in front of you. Daniel Marshall produces 61/4 x 54 torpedoes and sells them for $200 each, while a humidor of five pieces costs $1,000.

Tags:
Previous Article
Niyama Retreat is another luxury resort from the Maldives
Next Article
$11 million Diamond Laptop Sleeve by Coverbee