The 20 Hottest Hot Sauces in the World 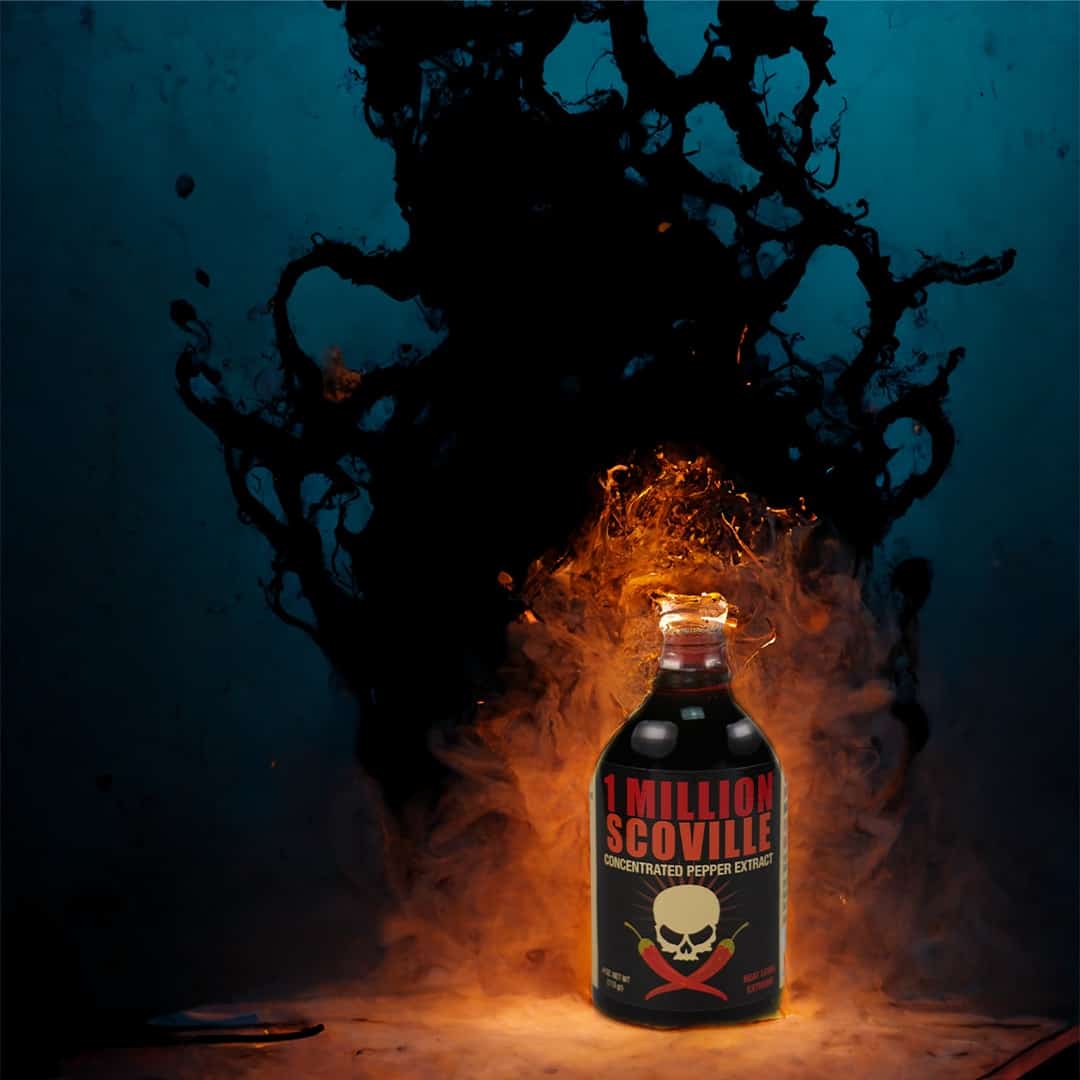 Many brands claim they produce the hottest hot sauce on the planet, but you’ll have to be the judge of that. Of course, unless you’re a hot sauce enthusiast, you probably won’t be tempted to try any of the following items on our list.

Trust us, even the people who can handle the spiciest foods available might find some of these sauces too hot for them. It is not a condiment for the weak at heart.

But what is one of the spiciest hot peppers on the planet? There are a few chillies that give you that extra kick you’re looking for. The Carolina Reaper is considered the hottest hot pepper, followed by the bhut jolokia, Trinidad scorpion pepper, scotch bonnet, jalapeno, and habanero. Although they all have heat in common, their flavors are unique and vary from one another. 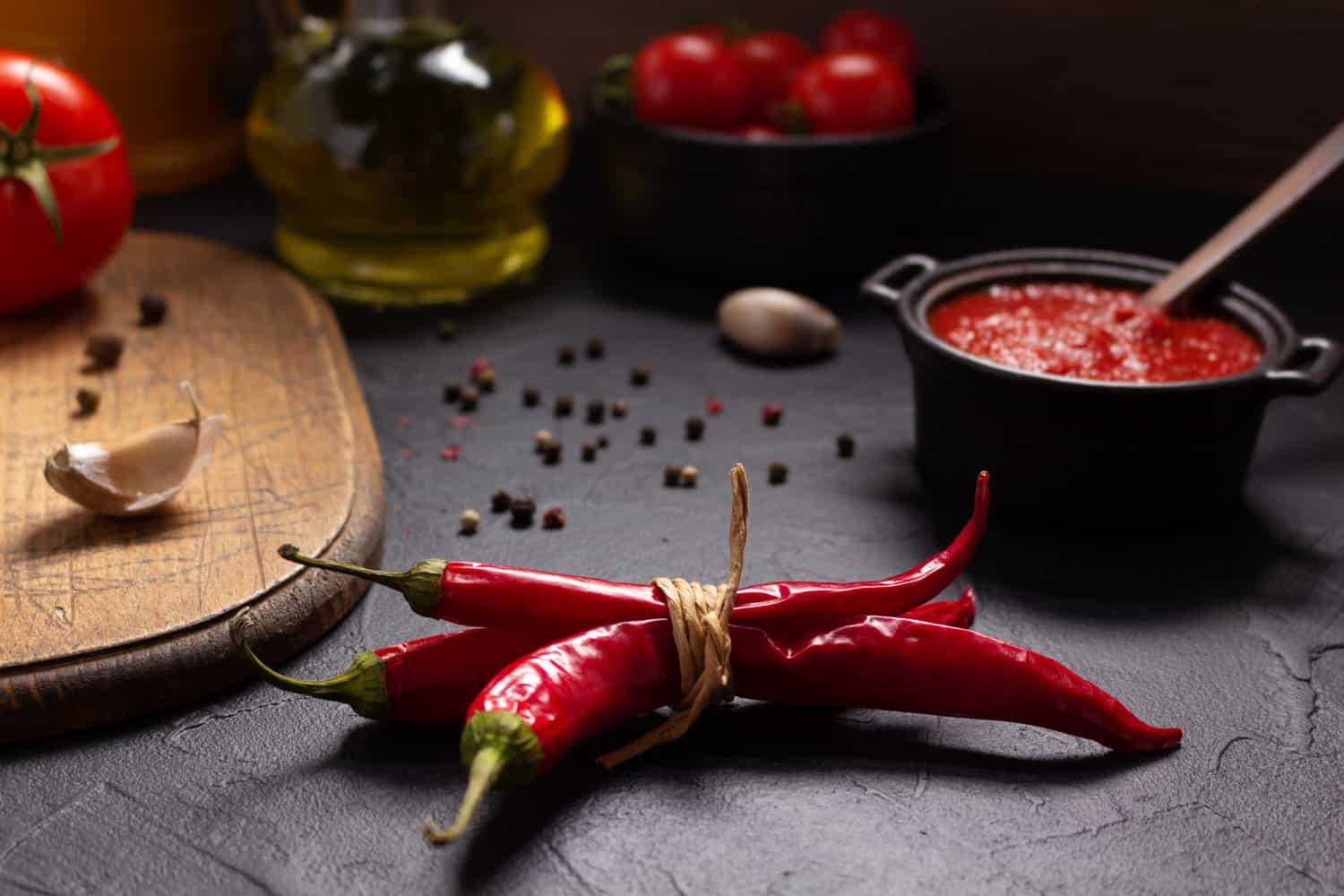 The way hot sauces are measured is by the Scoville scale, which ranks the heat of the hot sauce depending on the chili peppers they use. The SHU, or Scoville heat unit is determined by the concentration of active components in peppers, or the capsaicin extract, that gives them that extra kick.

Just as a side note, the one thing about hot sauce brands that stands out is that they are surely very creative with their names!

With all that being said, let’s take a look at the 20 hottest hot sauces in the world. Just a word of caution: remember not to touch your eyes after handling any of these, they can give you a serious burn. 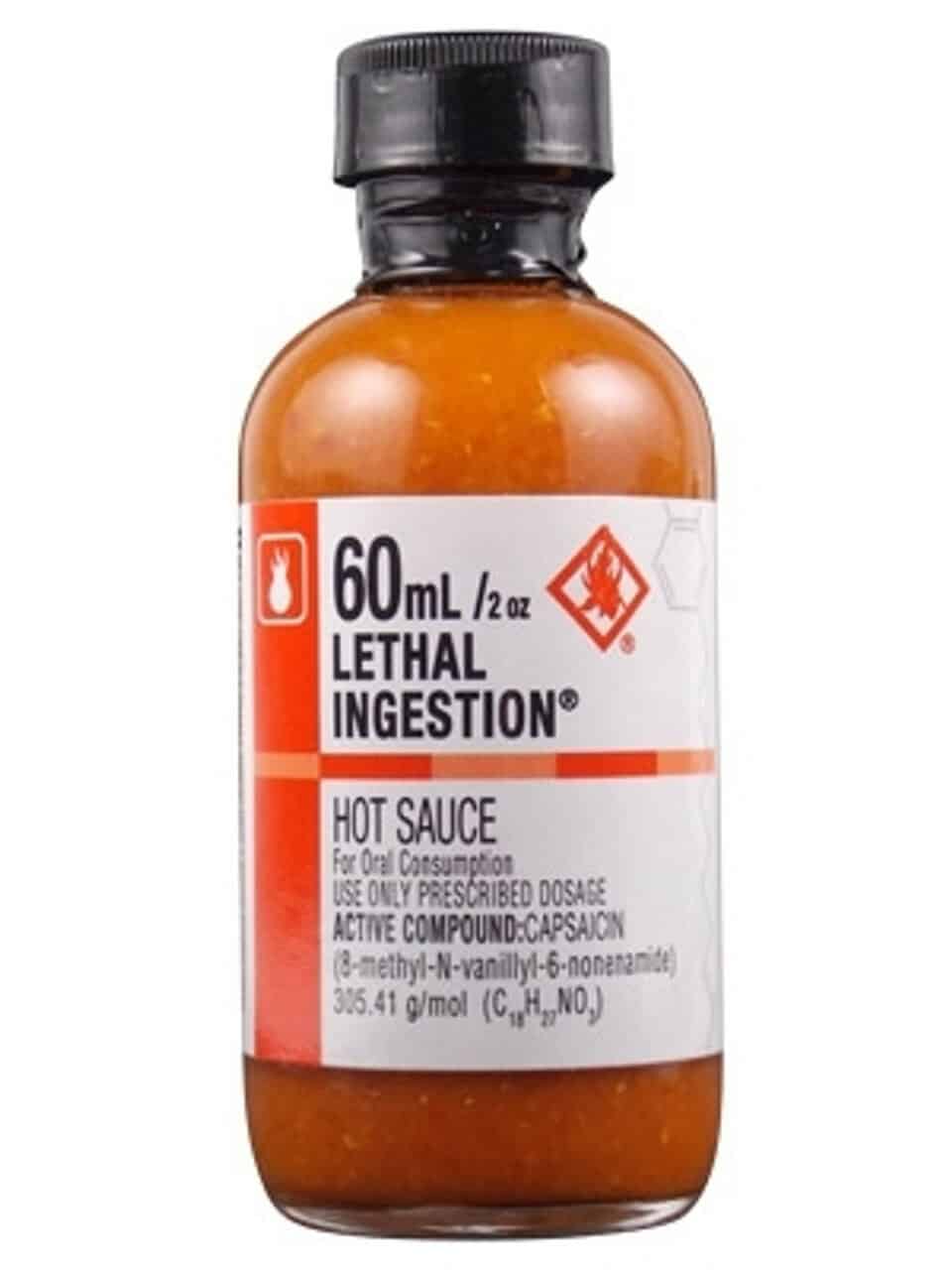 Getting its heat straight from the blend of peppers it contains, this sauce is the mildest of the hot sauces on our list. Mind you, at 1 million SHU, it is still one of the hottest non-extract hot sauces on the market. 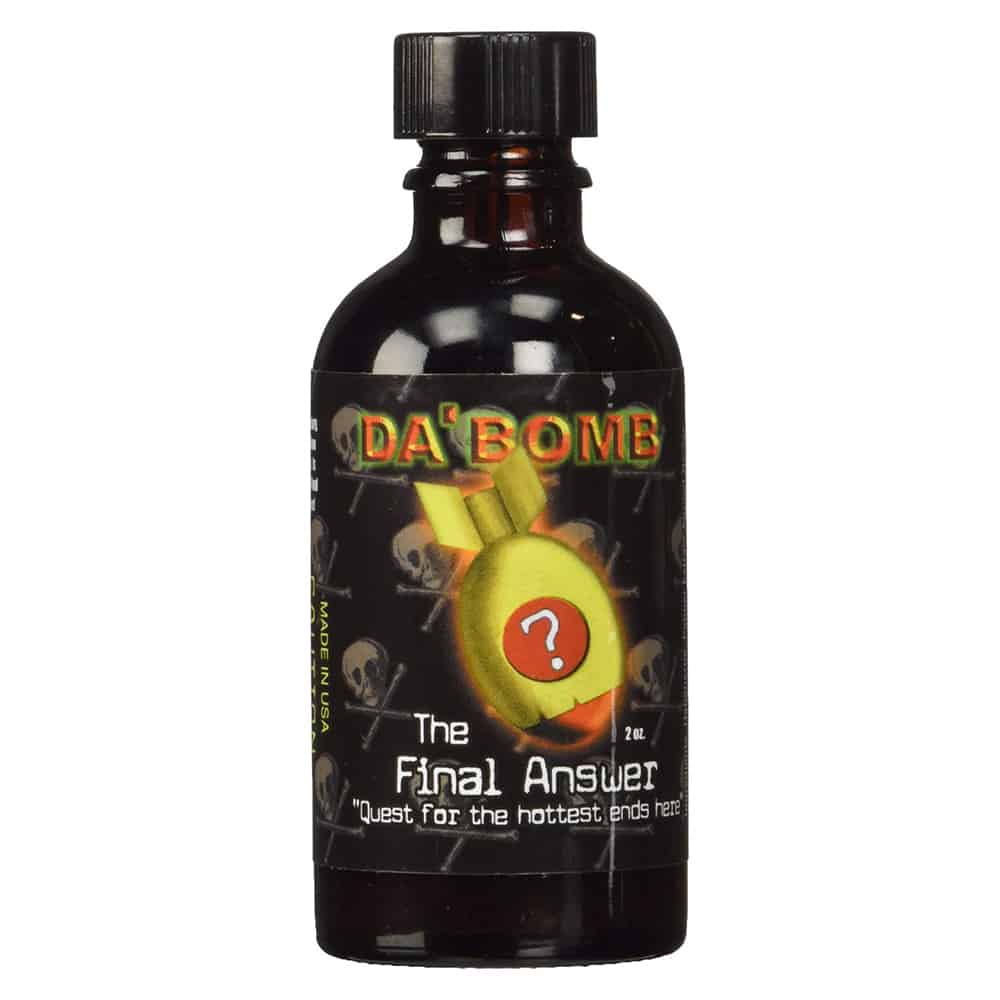 Made with habanero peppers, apricot nectar, spices and extract, this hot sauce is tangy but it has a touch of sweetness. At first dab you might be thinking that you’ll be able to handle it, but with 1.5 million SHUs, it is still a pretty spicy condiment.

It is a sugar free, gluten free, and non GMO product made in the USA, and it doesn’t compare to your standard hot sauce you might be used to. 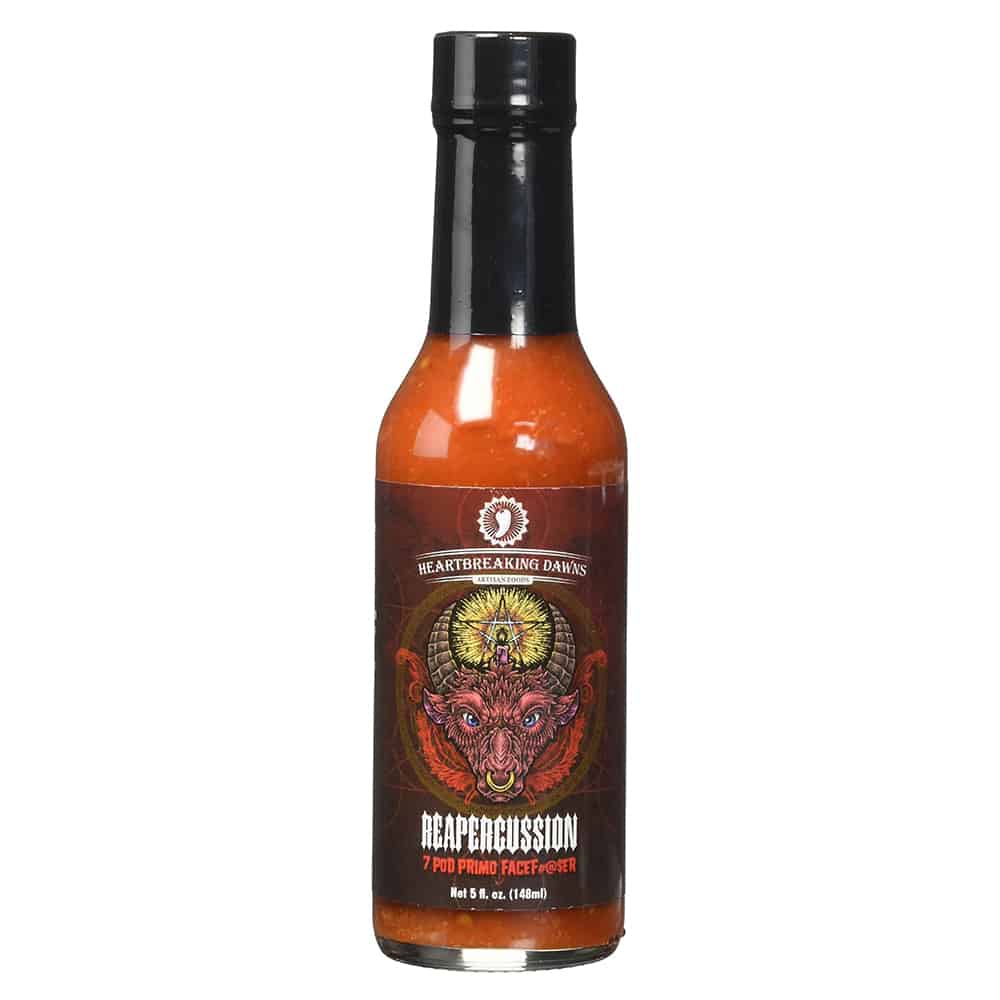 Paired with apple cider vinegar, lime, and garlic, the 7-Pot Primo and Trinidad scorpion peppers give this sauce a lot of zing. Measuring 1.5 million Scoville Heat Units, it is a pretty potent hot sauce.

17. Smack My Ass and Call ME Sally Hot Sauce 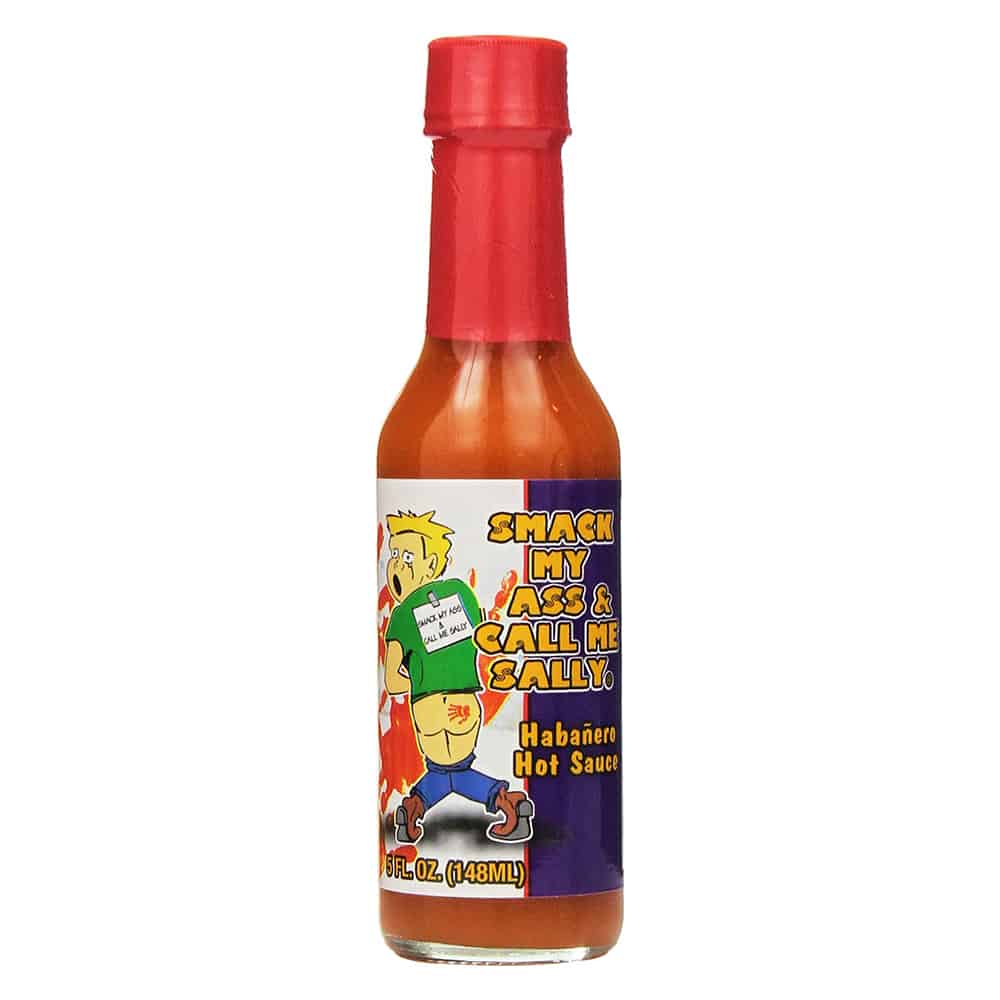 We must admit that the name of this hot sauce is very catchy. The crying man on the bottle is a great indication that it’s a jazzy sauce. The picture does speak a thousand words, so we don’t have to.

Although not the hottest on our list and coming in at 1.5 million SHU, it is still a pretty spicy option. Made from habanero peppers, it does have a nice flavor to it. Just like any other hot sauce on this list, use it sparingly. 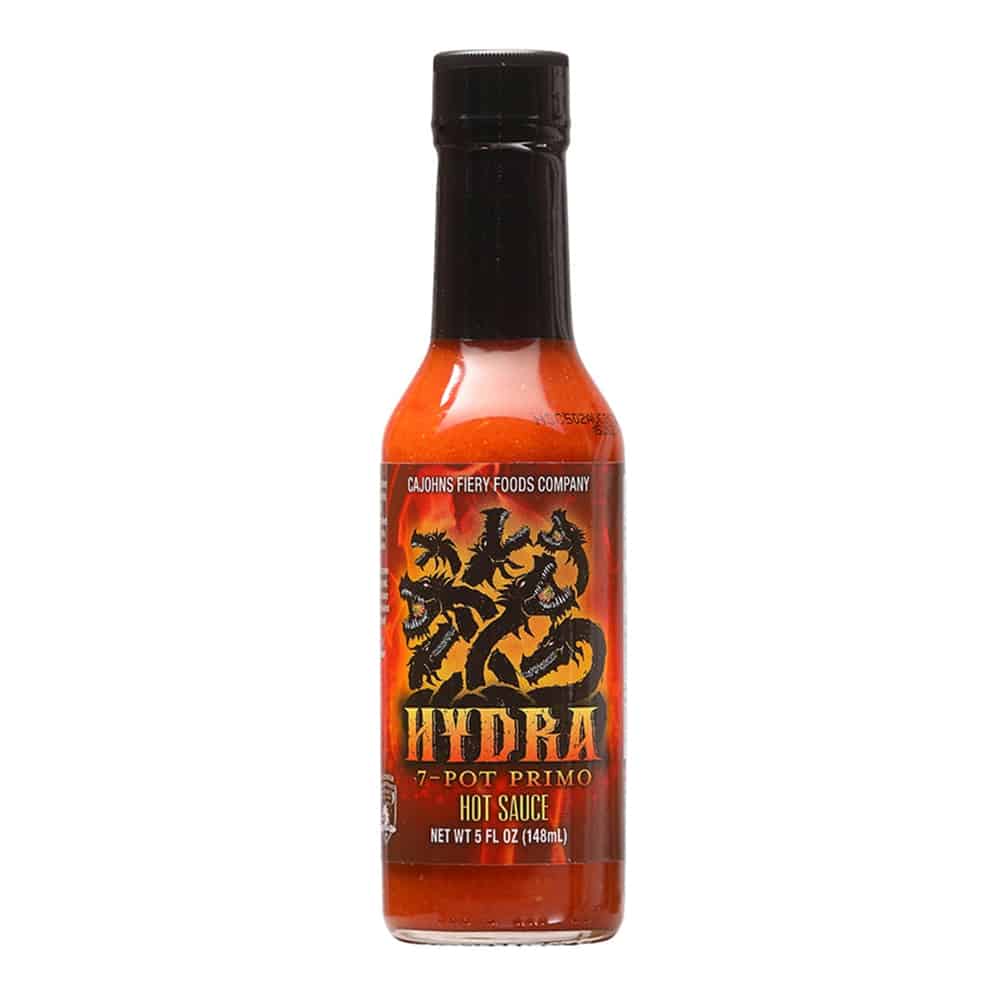 This sauce uses one single chile, or the 7 pot primo. The taste is so hot though that you can barely notice. The Hydra from CaJohns measures 1.5 million Scoville heat units that will send daggers all over your taste buds.

If you’re a rookie to spicy foods, try to stick with milder sauces. This one is still pretty feisty, so use with caution. 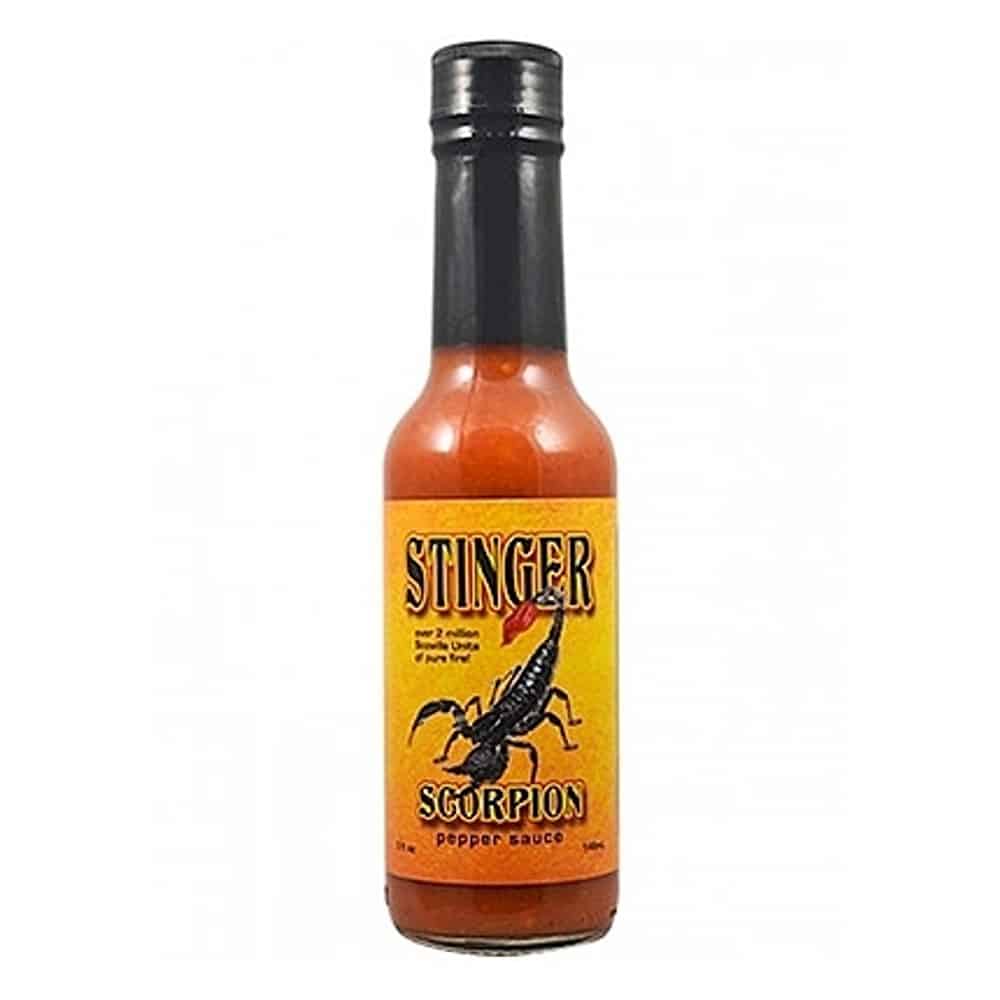 This product is from the makers of hot sauce at Figueroa Brothers. The Stinger Scorpion counts 2 million Scoville heat units, so it’s among one of the hottest options you can find.

Made from Trinidad Moruga Scorpion better, hence the name, this item offers a multilayered, slow burn that will make your mouth as if it’s on fire. But many people enjoy that burning sensation on their palate and this sauce offers them that feeling. 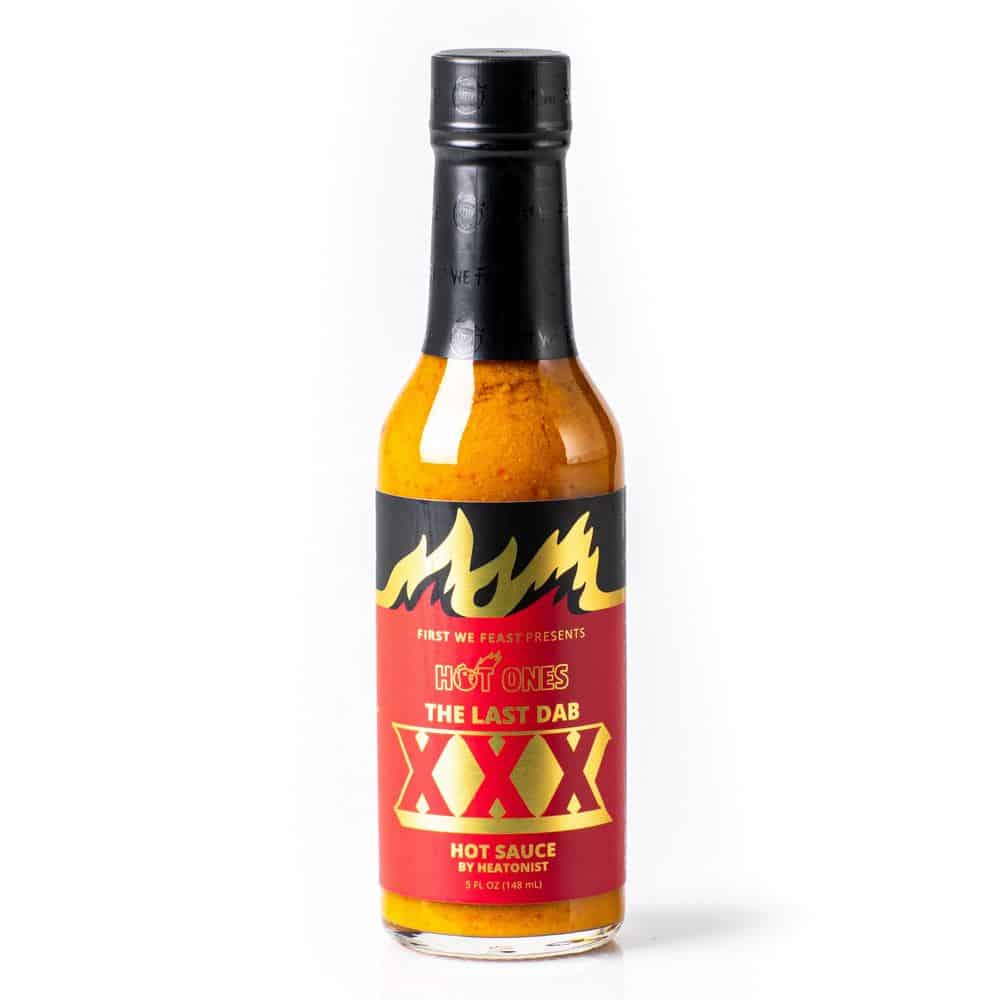 If you’ve ever watched the TV series “Hot Ones”, then you might have noticed this is the hot sauce that is mostly featured on the show. Many celebrities faced its wrath, so you might be tempted to taste this fiery condiment. 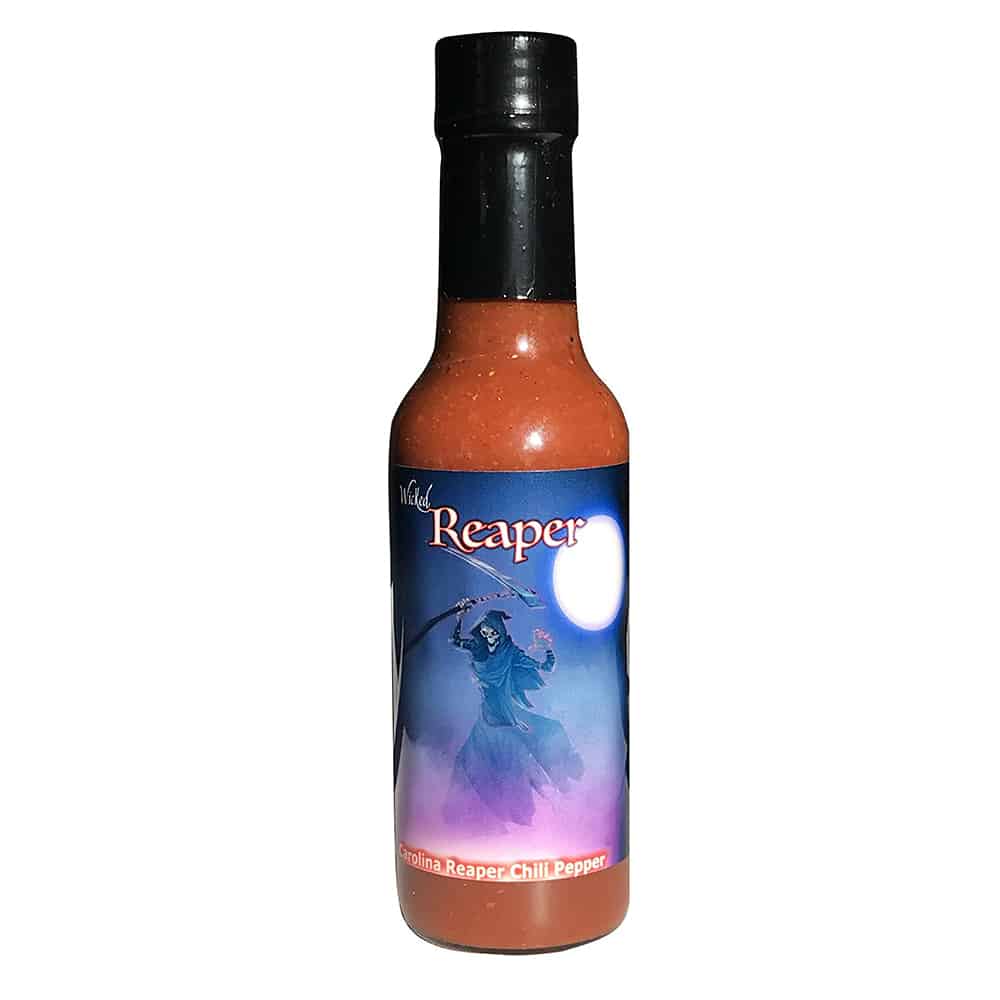 Made with one of the hottest hot peppers in the world, the Carolina Reaper, this hot sauce measures 2.2 million Scoville heat units. It is not even close to being the hottest hot sauce on the planet, therefore you still need a glass of milk afterwards.

You can feel a fiery burn more than five minutes after you first taste it, so that is still pretty feisty by our standards. 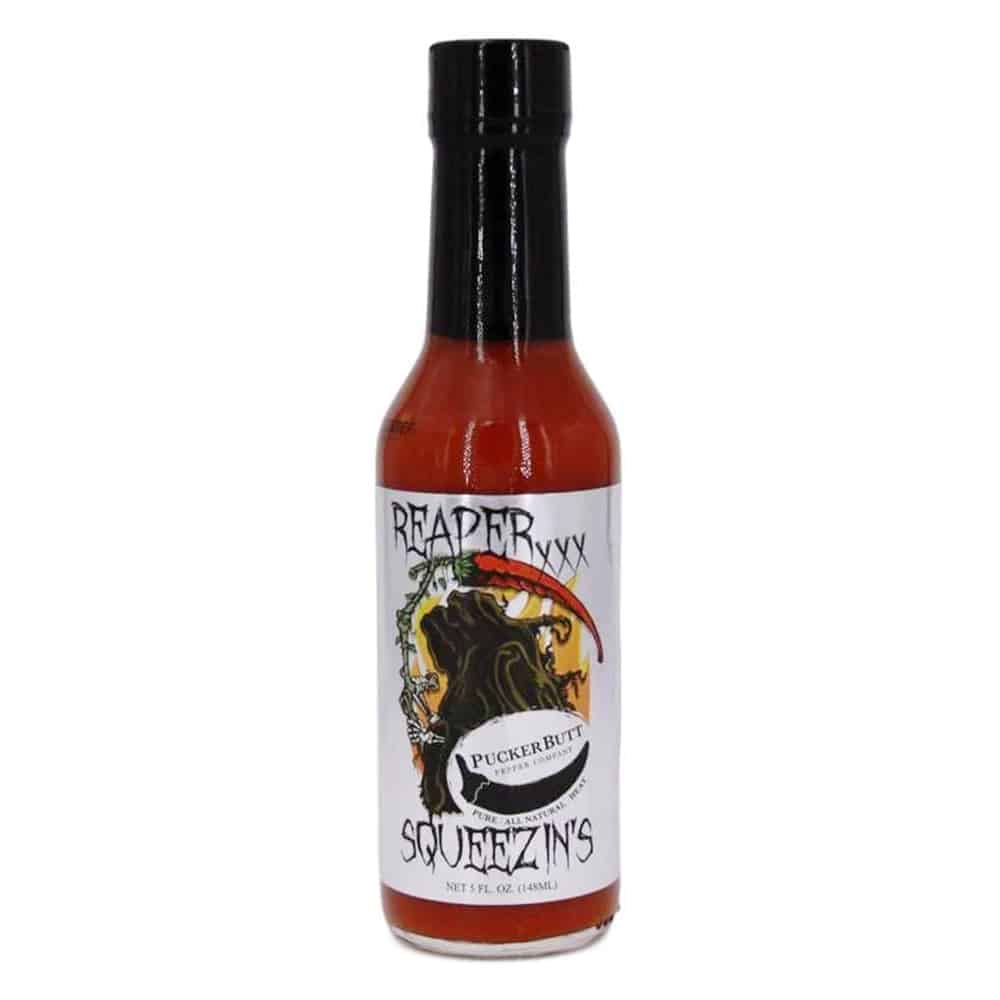 PuckerButt Pepper company makes this sauce, which contains 92% of Carolina reaper peppers. With vinegar mixed into this formula you barely taste it though! The heat of the peppers is the prevalent ingredient that you notice.

Counting 2.2 million SHU, it is still one that will make you grow hair on your chest! Don’t dab more than just a few drops on your food. 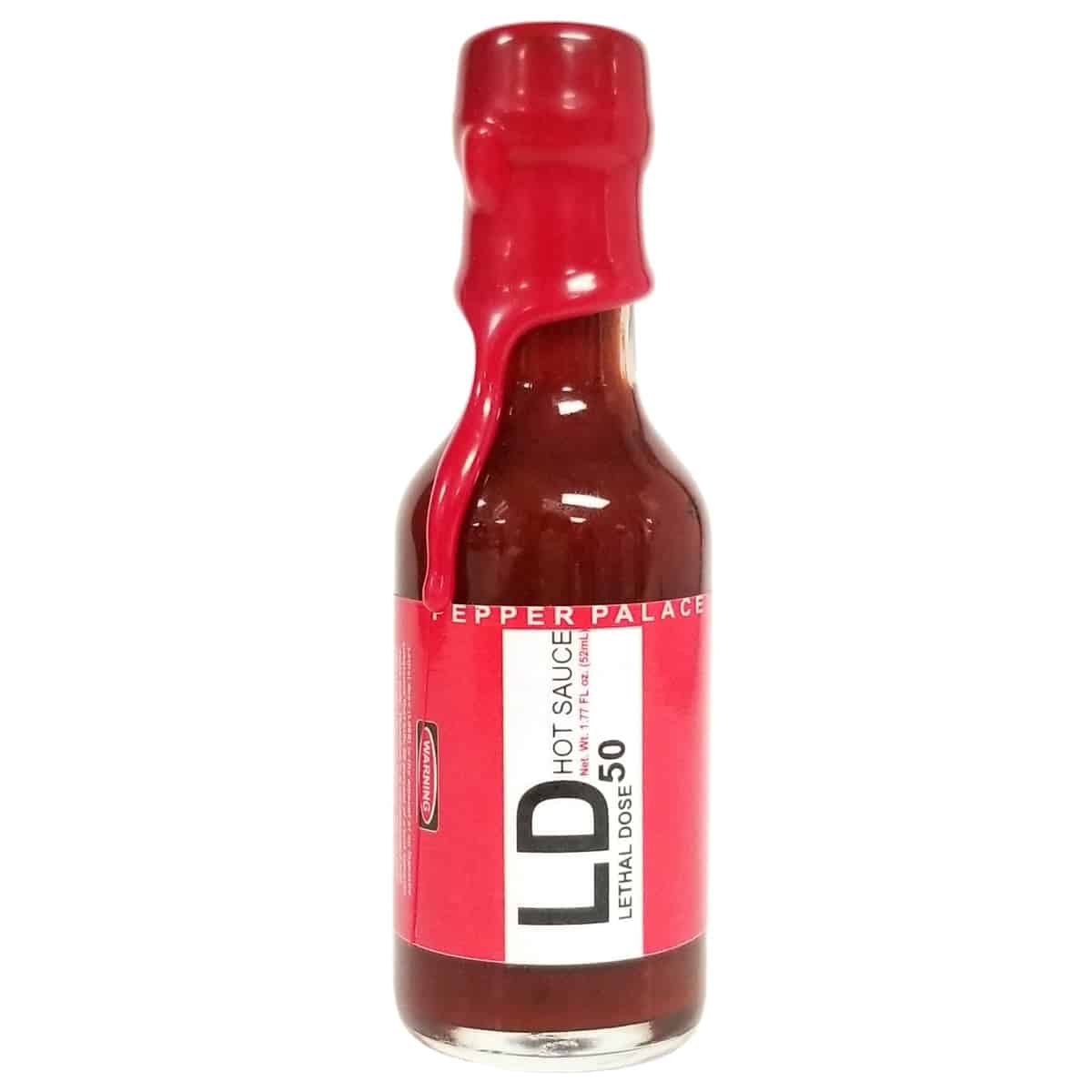 This company has a few hot sauces in its inventory and they are differ from one another. This particular option contains 3 million Scottsville heat units, so it’s still considered one of the hottest hot sauces available on the market.

Using four of the hottest peppers in the world, or the scorpion, reaper, habanero, and the bhut jolokia, your tastebuds will still enjoy a heated party in your mouth.

10. Hottest Hot Sauce in the Universe, The 2nd Dimension 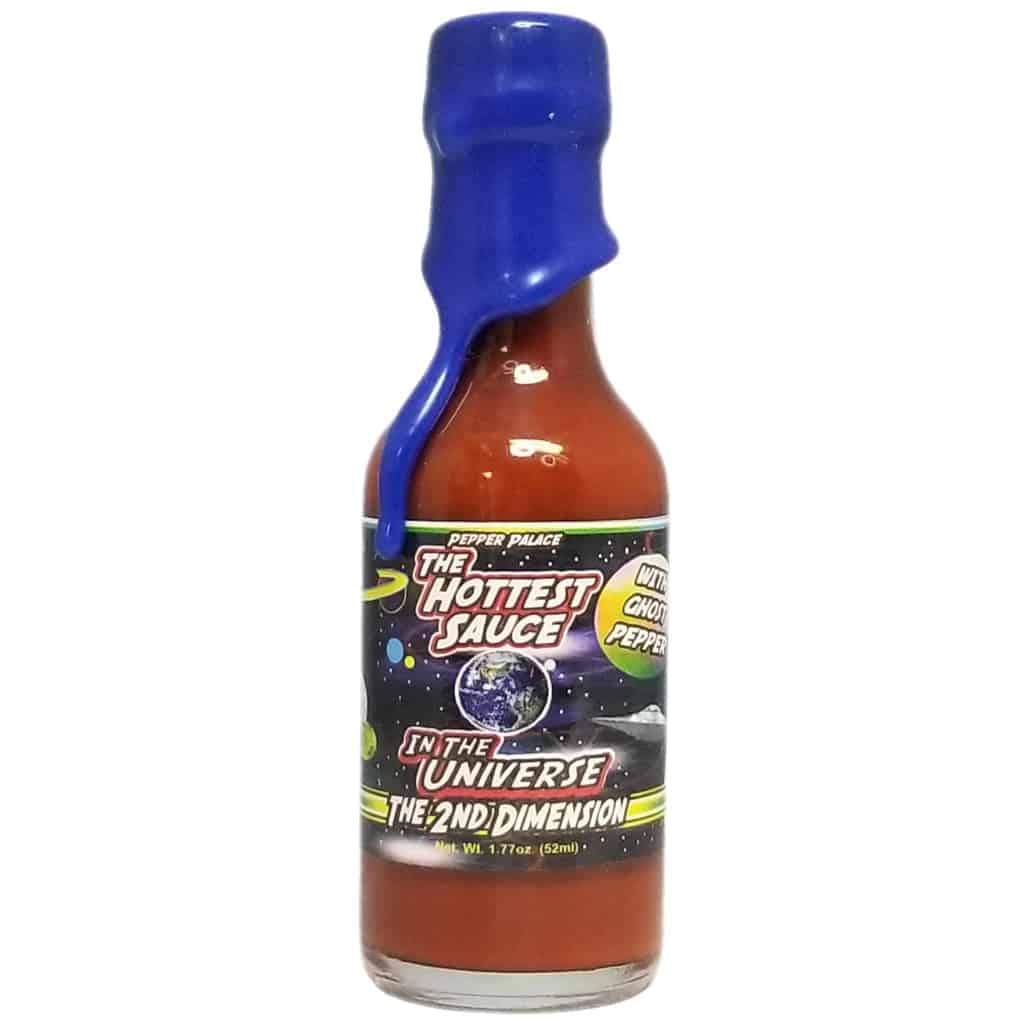 This one is not as terrifying as the next ones on our list, but you should still proceed with caution. Made by Pepper Palace, the sauce contains 3.5 million Scottsville heat units.

It is three times as hot as the “ghost pepper”, or bhut jolokia, so it isn’t to be used generously. Of course it depends on everyone’s tolerance level, but it is still pretty feisty if you ask us. 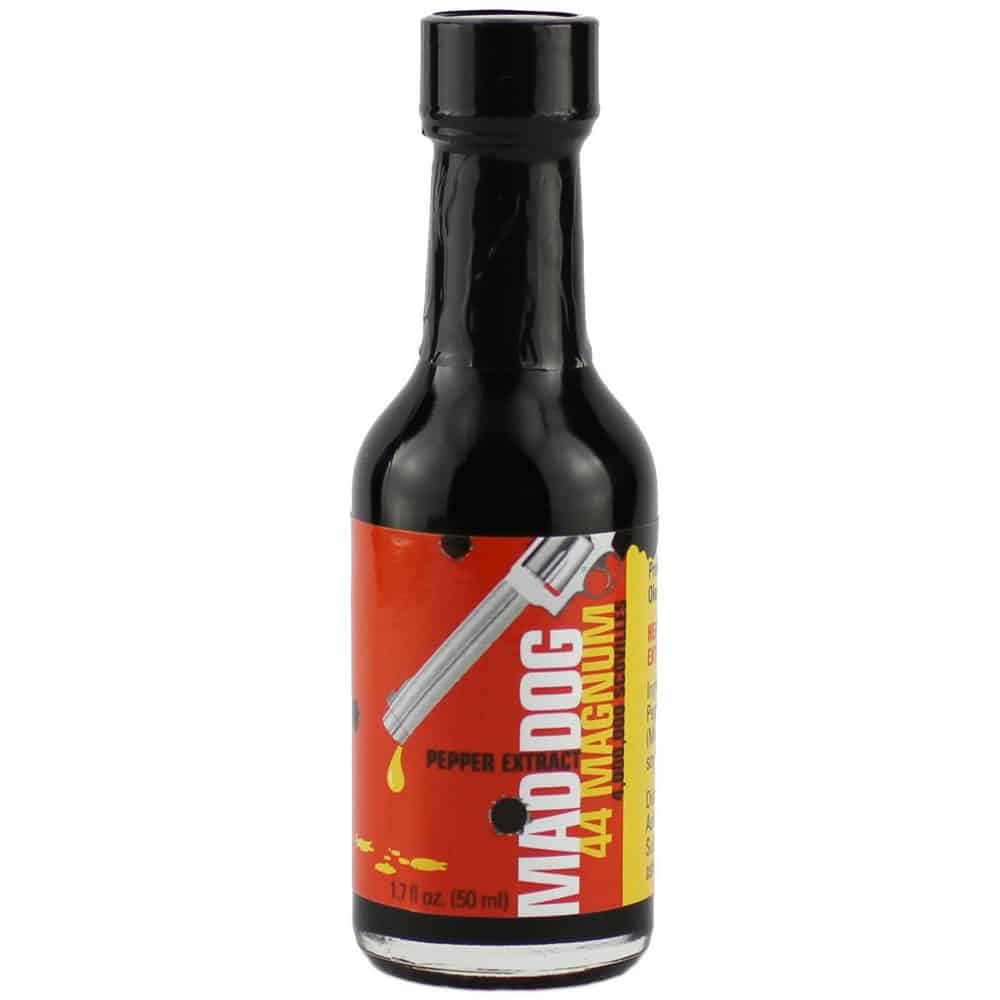 Mad Dog has a few hot sauces on their repertoire, and this one comes in at 4 million SHU. With plenty of heat, do not underestimate it, even though it’s their milder version.

It’s all about how you look at it, but we still think you should use it sparingly on food. It does deliver a sparkling flavor and a clean tasting heat which separates the brave souls from the rest of us. 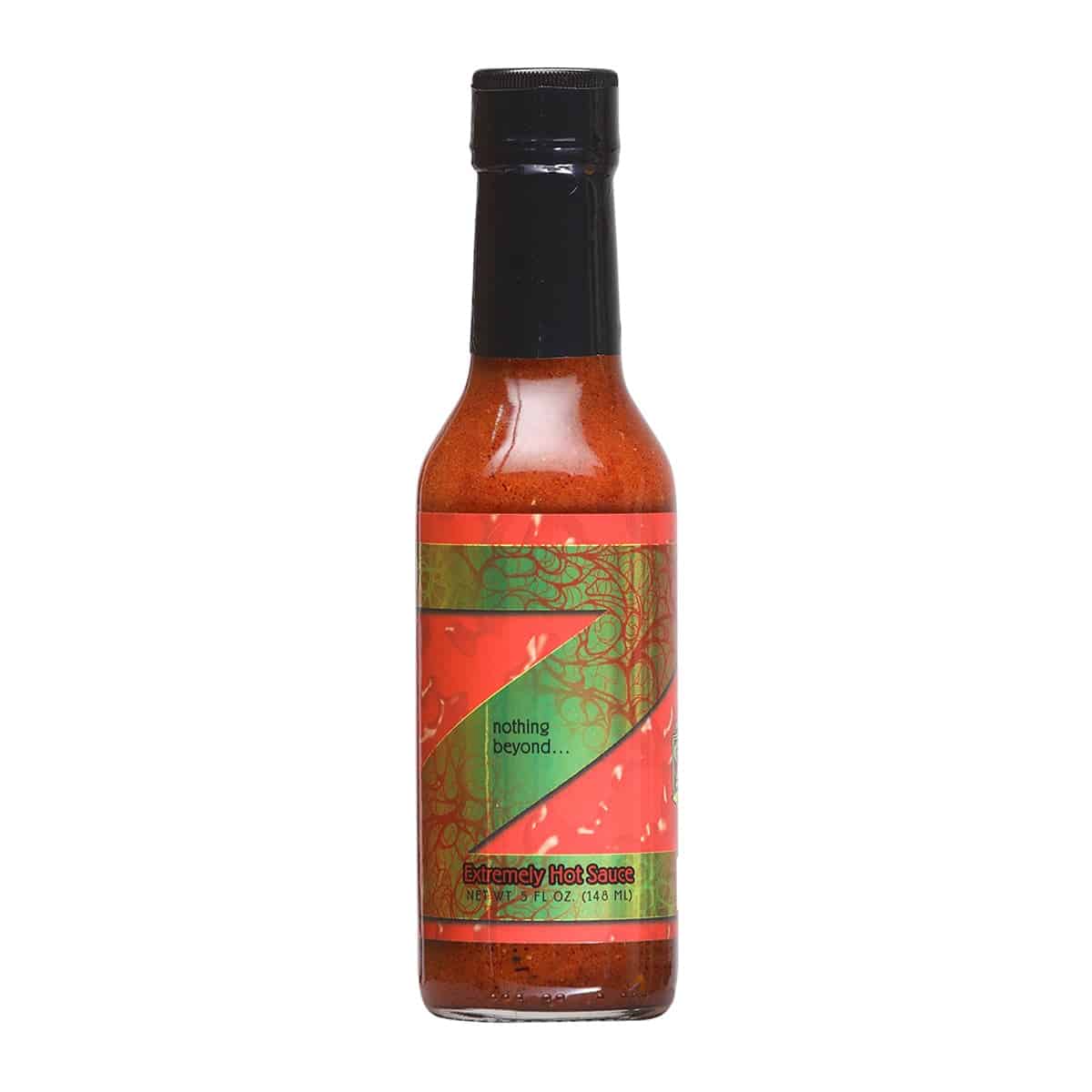 Counting 4 million Scottsville units, Nothing Beyond isn’t the hottest on the list, but it is still up there on the hottest of the hot sauces. Other ingredients used give this sauce a lovely fruity flavor. The nice taste comes from banana, guava, papaya, pineapple, and passion fruit.

Even the seller of the sauce warns you that it will not kill you, but you wish it did. Like the following few hot sauces, this one should also be used only sparingly. Unless you’re a sucker for punishment, that is. 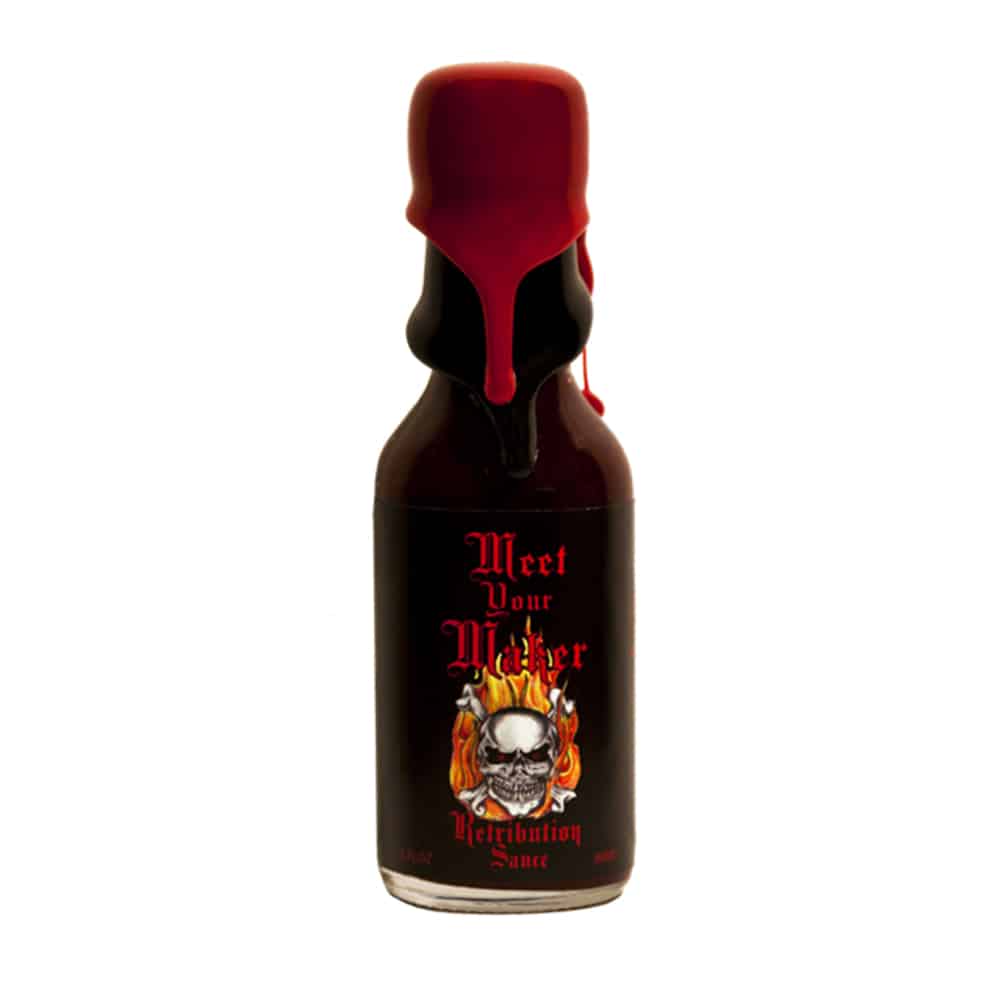 We don’t encourage you to Meet Your Maker, but the death theme seems pretty popular when it comes to hot sauces. We think the extreme heat influences those who come up with the names! With 5 million SHU, this sauce comes in a coffin container.

Yup, you heard right! It is made from ghost pepper, or the bhut jolokia that comes in three different methods: extracted, fresh, and ground. Unless you know you can handle heat, leave this one alone. 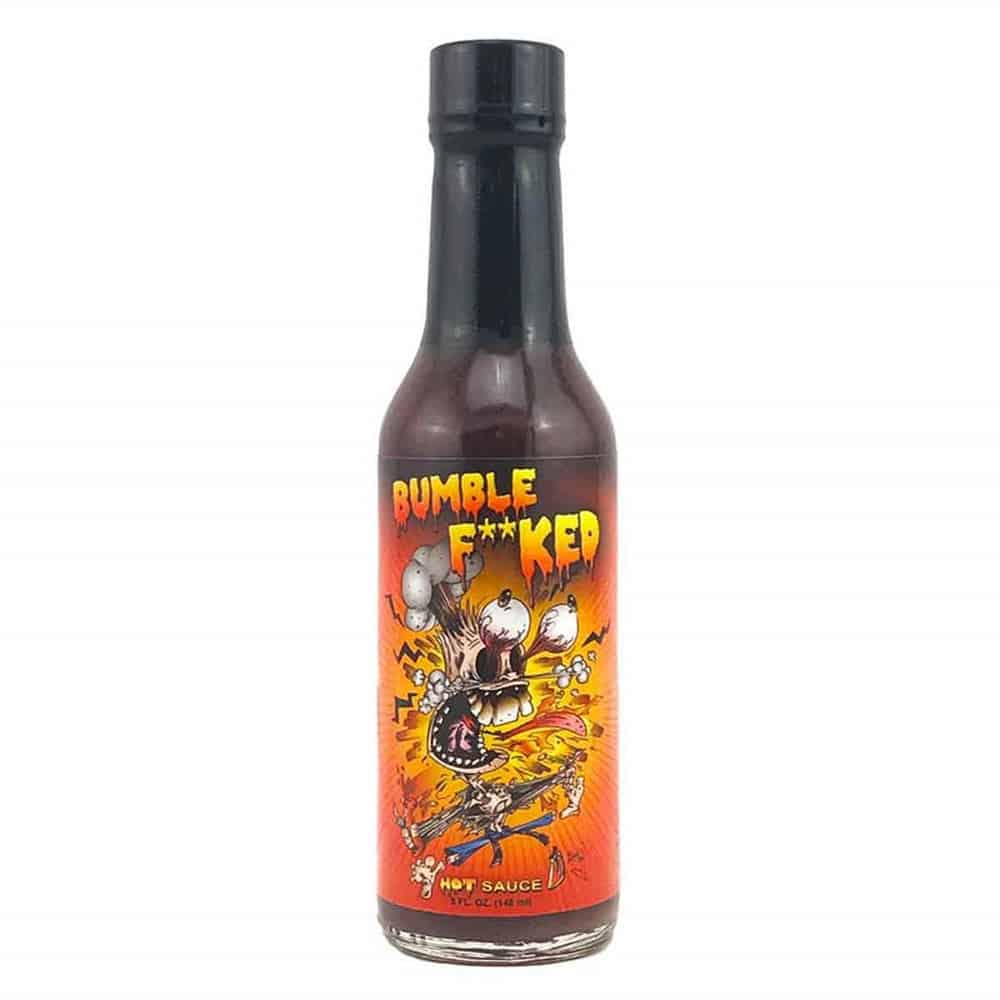 This sauce is a collaboration of CaJohns and Ron Thal, or Bumblefoot, a Guns and Roses former guitarist. Although this sauce also counts 6 million on the Scottsville heat scale, the other ingredients make it a tiny bit more bearable.

The Caribbean fruits and mustard mixed in the blend give it a lovely flavor, plus it makes the heat not seem as potent. But still, the caffeine and ginseng make it very hot, so don’t be too generous with it on your food. 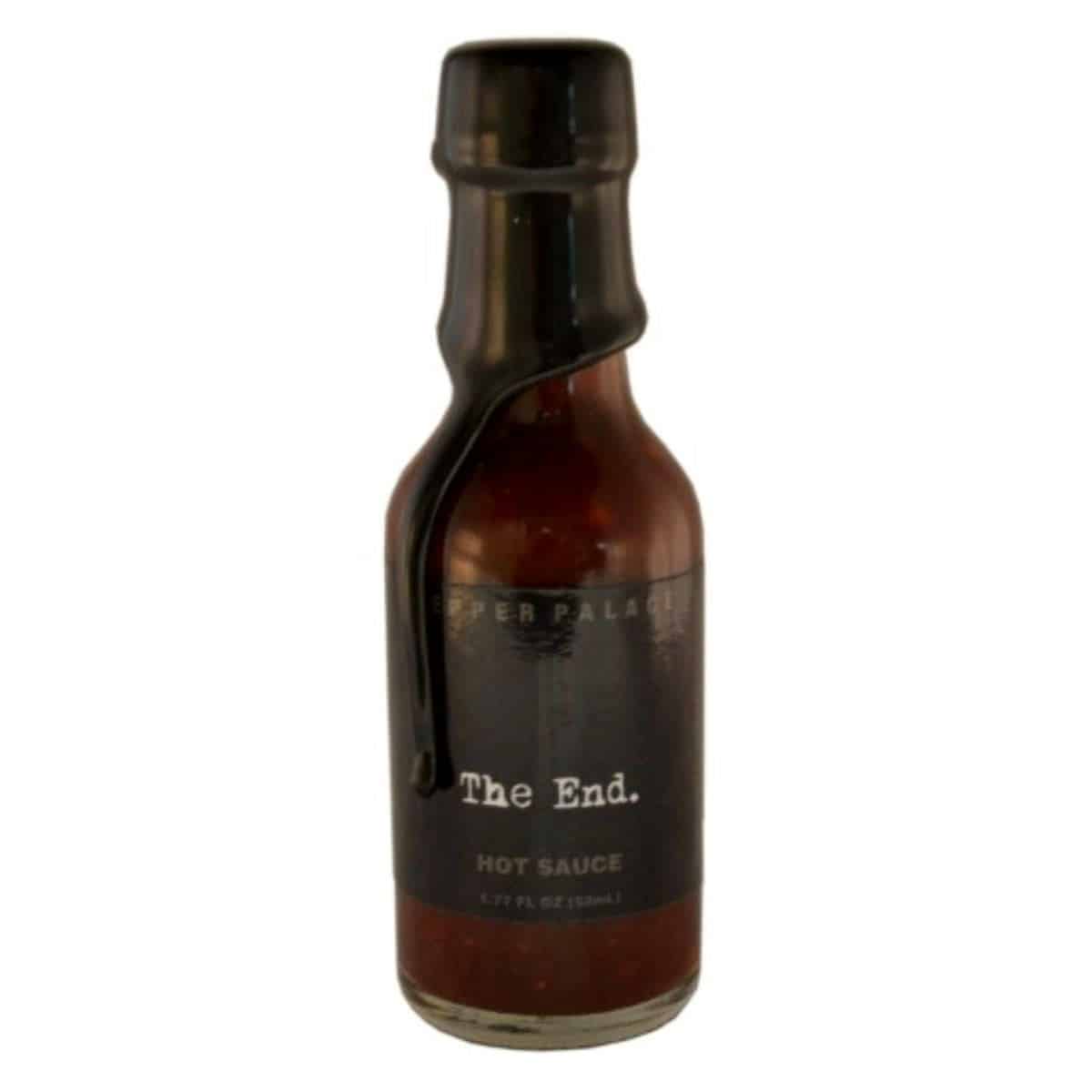 The End hot sauce is made from Carolina reaper and habanero peppers and it measures 6 million on the Scottsville heat scale, making it into our top five of the hottest sauces you can find.

The bottle does warn you to use it as a food additive, and it contains a hundred pots of chili in a single ounce of sauce. It can be substituted for chili flavored dishes, but you should use it sparingly.

Made from one of the hottest extracts on earth, do not let its unassuming bottle fool you. It is hot! 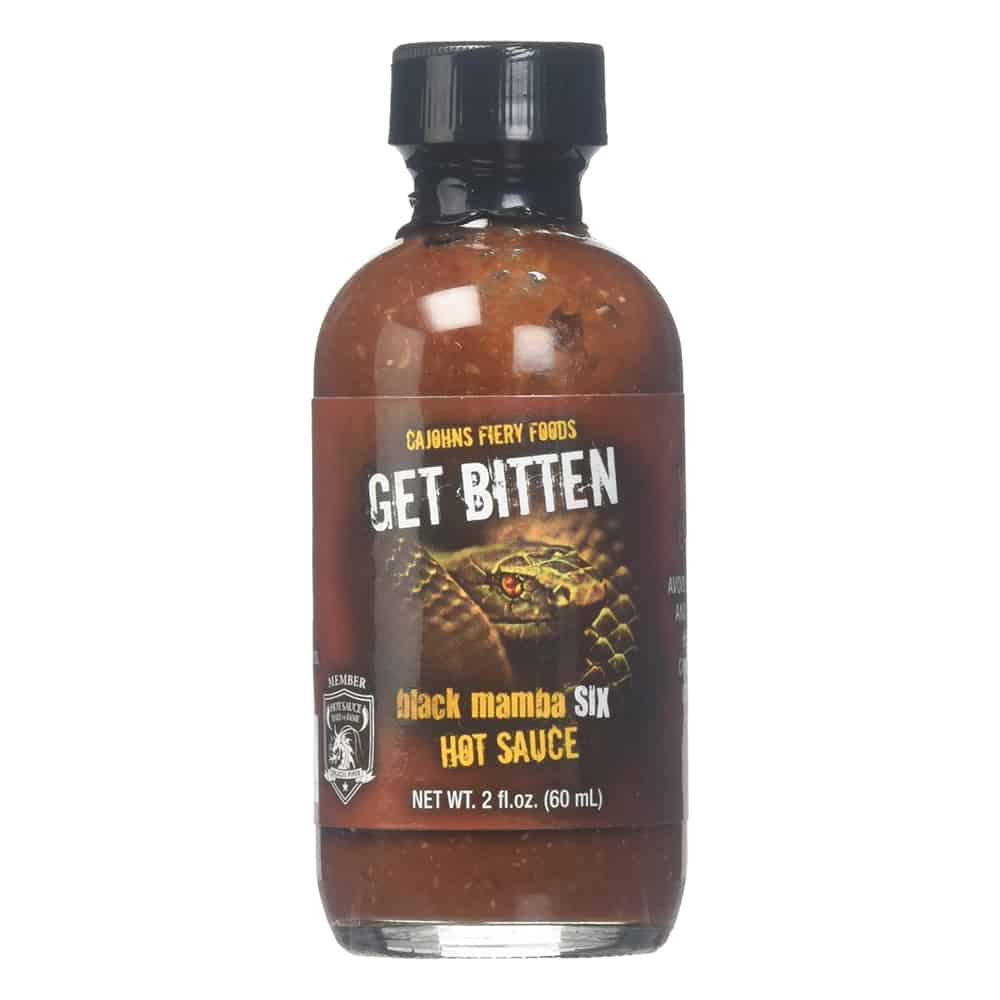 The number 6 on the label means that the sauce is made from pepper extracts that count in at 6 million Scottsville heat units. Another ingredient is the chocolate habanero pepper, which gives it a nice flavor.

But don’t be fooled, it will make your mouth feel as if it’s on fire for a few minutes. So use just a small amount on your food, and don’t consume directly. The warning on the bottle is not a hoax. Take our word for it! 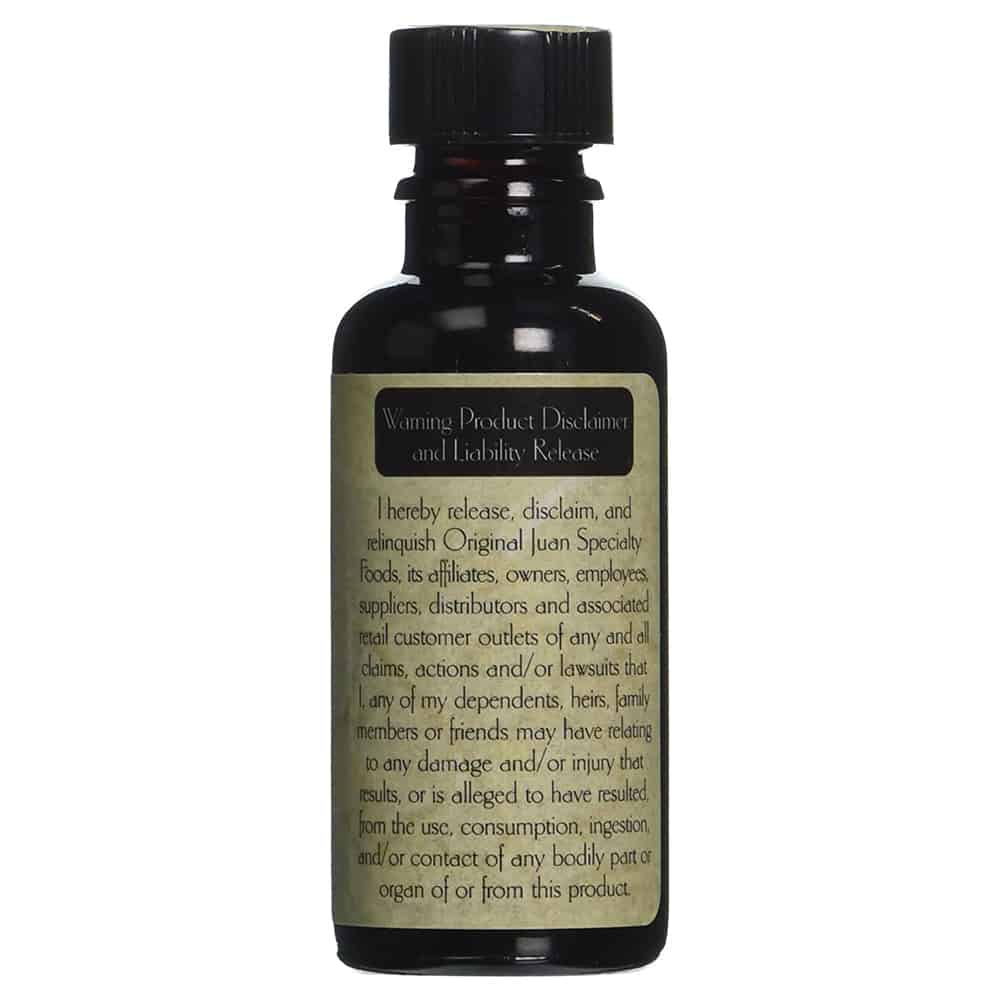 Don’t be fooled by the label into thinking this is soy sauce. It might look like soy sauce, but this is the third hottest hot sauce we found on the market. With 7.1 million SHU, it is not for the average spice lover.

If you take your time and read the label, it does warn you of its heat and urges you to use it as an additive on food and not to consume it directly. It is fiery hot and most people can’t deal with it, so be forewarned. 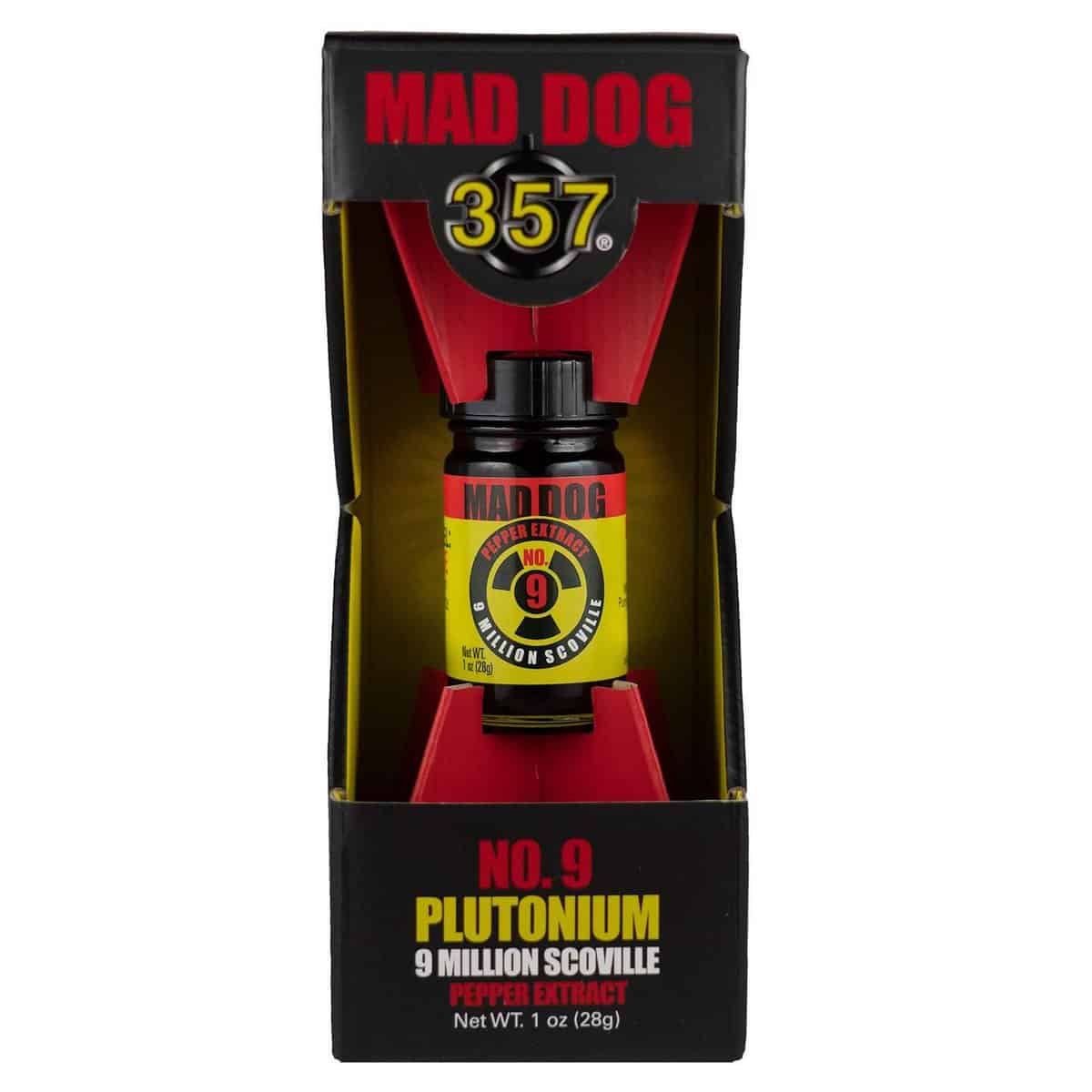 Coming in the second spot, Mad Dog No.9 Plutonium counts 9 million SHU, and it contains 60% pure capsicum. If you can handle this sauce, you’re pretty badass.

One of those condiments that only thrill seekers are willing to try, the sauce is so hot there’s even a warning on its label that says: “use sparingly and do not consume directly”!

That pretty much says it all. If you don’t believe us, give it a try, but please make sure you can handle the heat. If not, a visit to the hospital might be in order! 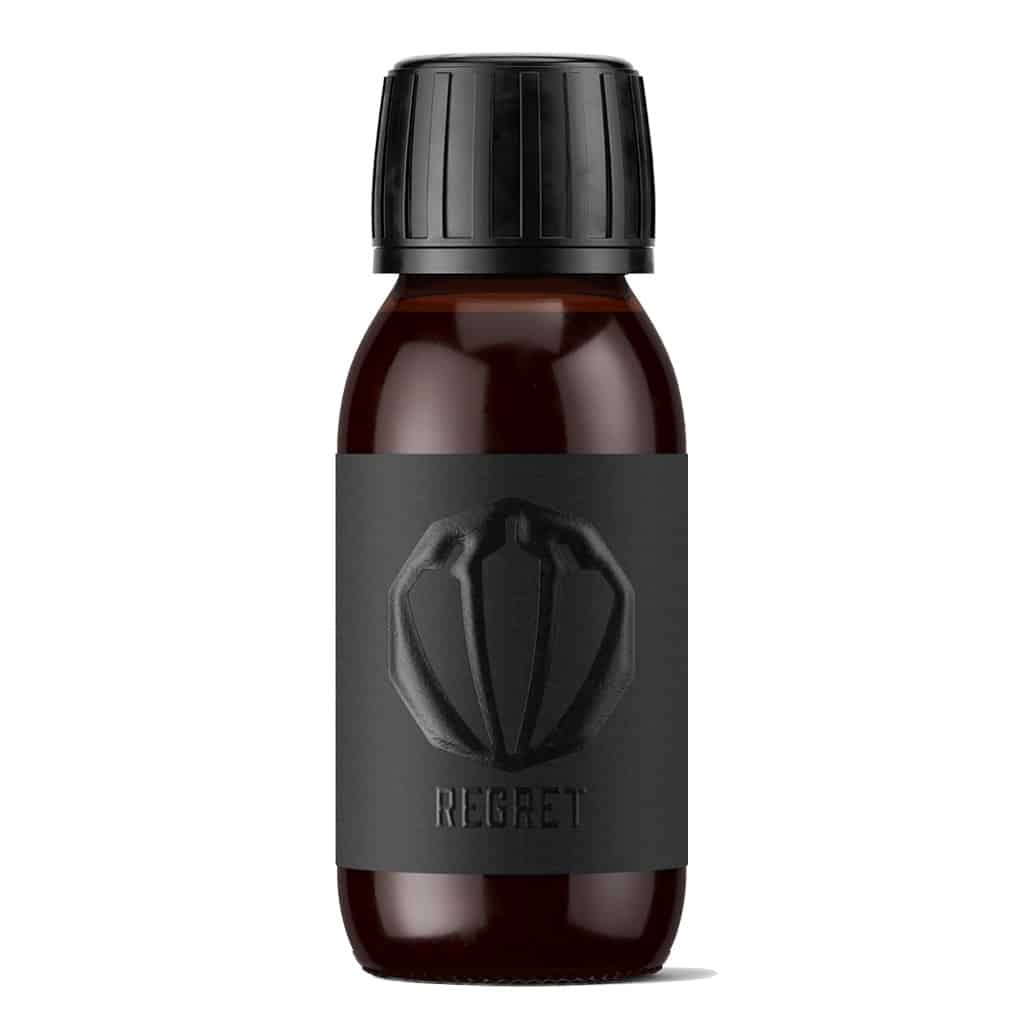 Hands down, at 12 million Scottsville heat units, this is by far the hottest hot sauce in the world. If you’re someone who can’t handle too much spice, this is not a sauce to try. It is so hot, only the bravest souls can even consider trying out this hot sauce.

Made from Oleoresin extract, tomatoes, lime, garlic, and herbs, even the label warns you of its intensity. This limited edition hot sauce adds real fire to any dish, so please use it with caution. The extreme thrill seekers are probably the only people on the planet to have tried this.

Here at Luxatic we’re definitely not in that category. So if you’re someone who was brave enough to give this a try, we would really like to hear from you.

This sums up our list of the 20 hottest hot sauces in the world. If you tried any of these, you are really our hero and we bow down to you. Do leave us a comment below letting us know how you enjoyed them.

**Luxatic is reader-supported. When you buy through links on our site, we may earn an affiliate commission.
Tags
Previous Article
20 High-End Watches for Women With Fine Taste
Next Article
20 Rising Fashion Designers You Should Know