Amongst all of our planet’s wonders, waterfalls are arguably some of the most majestic. Benign and beautiful, they are nevertheless a testament to Mother Nature’s awesome power. With this in mind, we’ve compiled a list of the most impressive falls around the world, starting with:

New Zealand is a place with countless natural wonders and waterfalls are quite abundant, but the most impressive of all is Sutherland Falls.

Though not quite New Zealand tallest waterfall (that distinction goes to Browne Falls), it is nevertheless a jaw-dropping sight. Flowing from the relatively small Quill Lake, it is remarkably powerful considering its source. Water drops constantly from 1,982 feet, but it’s a bumpy ride to the bottom, with three closely separated steps along the way. 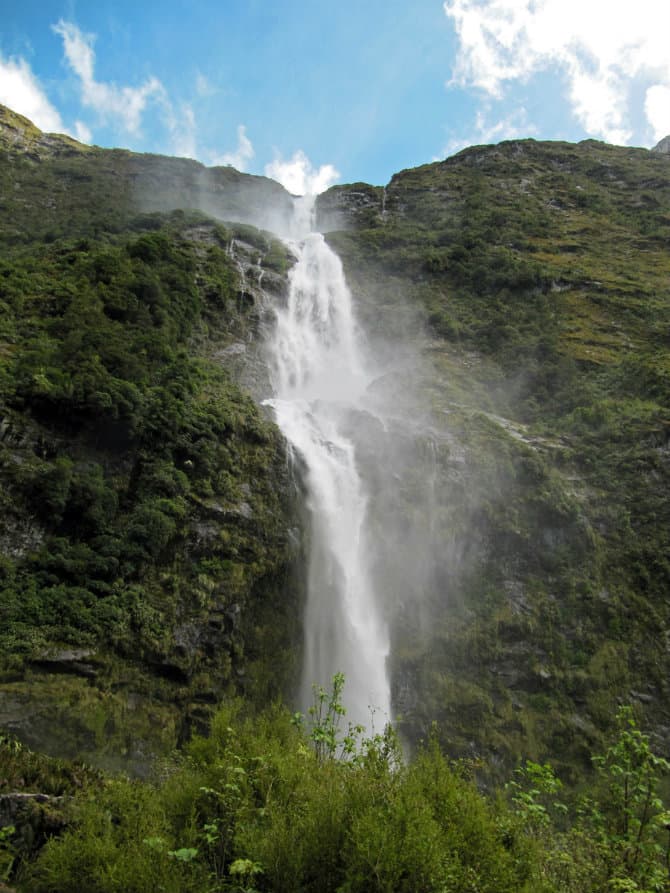 This is one of the clearest cases of human development spoiling nature’s beauty. The falls already shrink significantly during the dry season and even in the rest of the year, its full force is held back by the extensive hydroelectric installment upstream. Nevertheless, during the monsoon Jog Falls is all but resurrected and can be witnessed in its true glory.

Dropping 829 feet and with a width of over 2000 feet at peak flow, it is without a doubt the most powerful waterfall in Asia and one of the most impressive in the world. 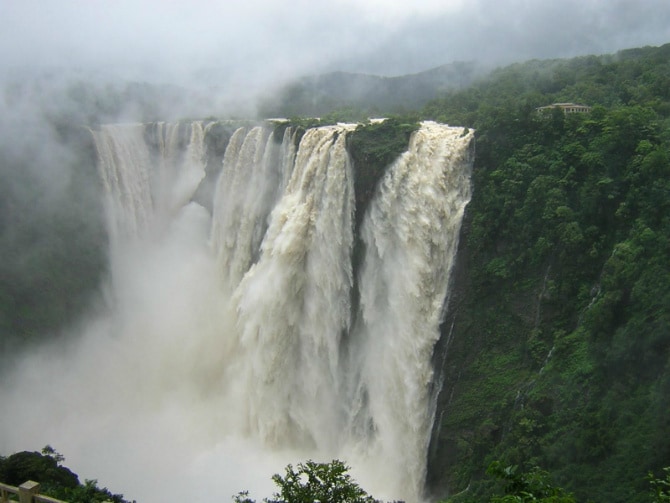 Probably not as grandiose as other entries on this list, yet the charm of Plitvice is undeniable. The waters flowing over (and under) the karst have carved a series of inter-connected lakes, caves and waterfalls.

The place is one of unparalleled natural beauty, covered in lush vegetation you won’t find in a lot of places in Europe and with astonishingly beautiful waters that change color, from azure to green, grey, or blue, depending on the quantity of minerals and organisms in the water, as well as the angle of the sunlight. 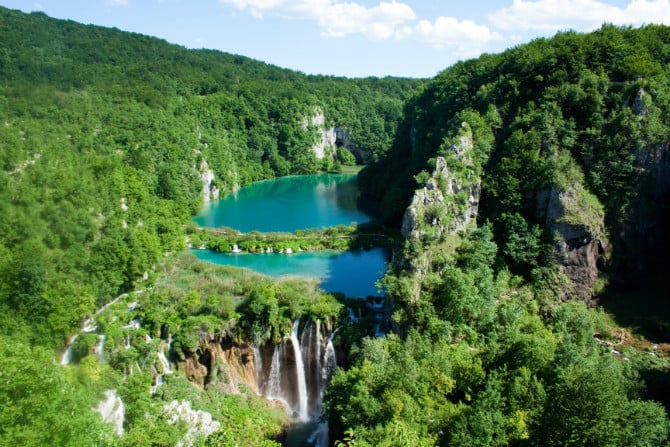 While not exactly a conventional-looking waterfall, one in which the water drops vertically from high up, Langfoss is nevertheless an impressive torrent that flows for more than 2000 feet over the granite walls of Akrafjord, before ending up in its estuary.

It is unique in a number of ways. First of all, it is very accessible, with a major road running right along its base. Secondly, given Norway’s dependence on hydroelectric plants for virtually all of its power, it is one of the country’s few waterfalls of such size and strength unspoiled by human development. 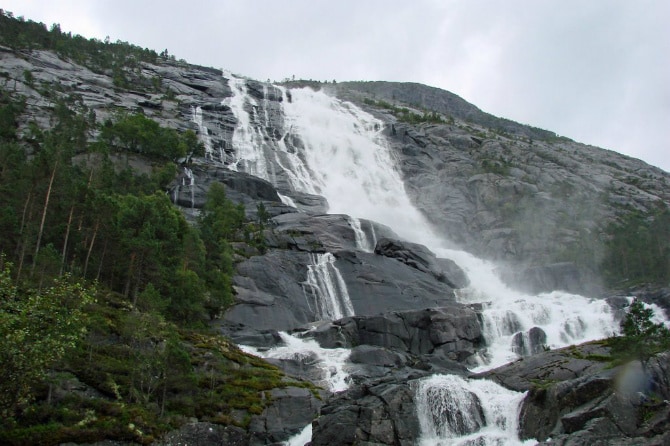 Yosemite National Park is known for many amazing natural wonders, like its scenic granite cliffs, pristine forests and many spectacular waterfalls. The foremost among these is Yosemite Falls, the highest falls in North America, with a 2,425-foot drop.

While the waterfall itself is impressive enough, it’s those surroundings, with granite cliffs and Giant Sequoia trees, that make it a truly breathtaking sight. And while Yosemite Falls does dry up for the second half of the year, the melting snows of Spring see it roar back to life. 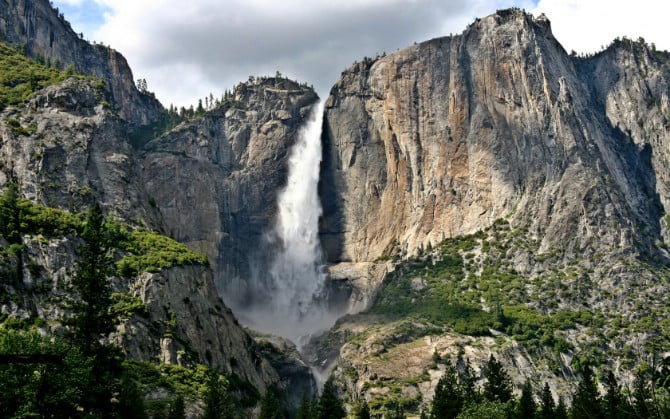 Kaieteur is a monster of a waterfall. It’s formed where the Potaro River drops a dizzying 741 feet (more than four times higher than Niagara!) into a large chasm – a rare occurrence for a river of that size to drop so suddenly and from such a height.

With such incredible features, Kaieteur would probably be a prime target for development as a power source, if it wasn’t in the middle of a protected national park.  Unfortunately, it’s also in an extremely isolated area, which makes it virtually inaccessible for tourists. 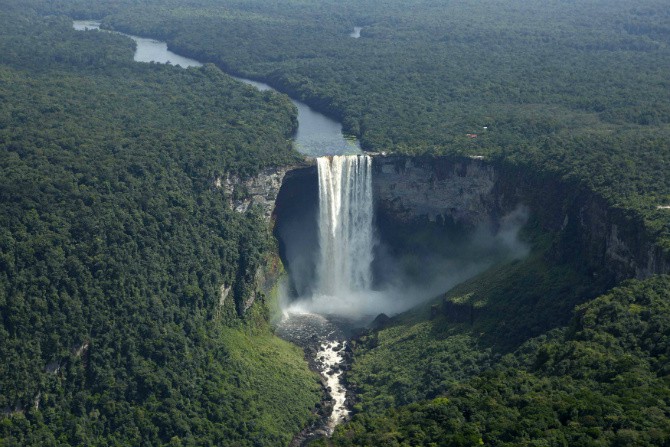 Though seemingly sourced in heaven itself, the waterfall actually gets its name from a US aviator called Jimmy Angel, the first man to actually fly above it.

The waterfall forms as the Rio Gauja funnels into a sinkhole at the edge of the mountain and plunges an astonishing 2,648 feet into the canyon below. It’s such an incredibly high drop, that despite the fact that the volume of water flowing is quite sizeable, it actually vaporizes before it has a chance to reach the ground. After doing this disappearing act, it re-forms and continues to flow down the valley. 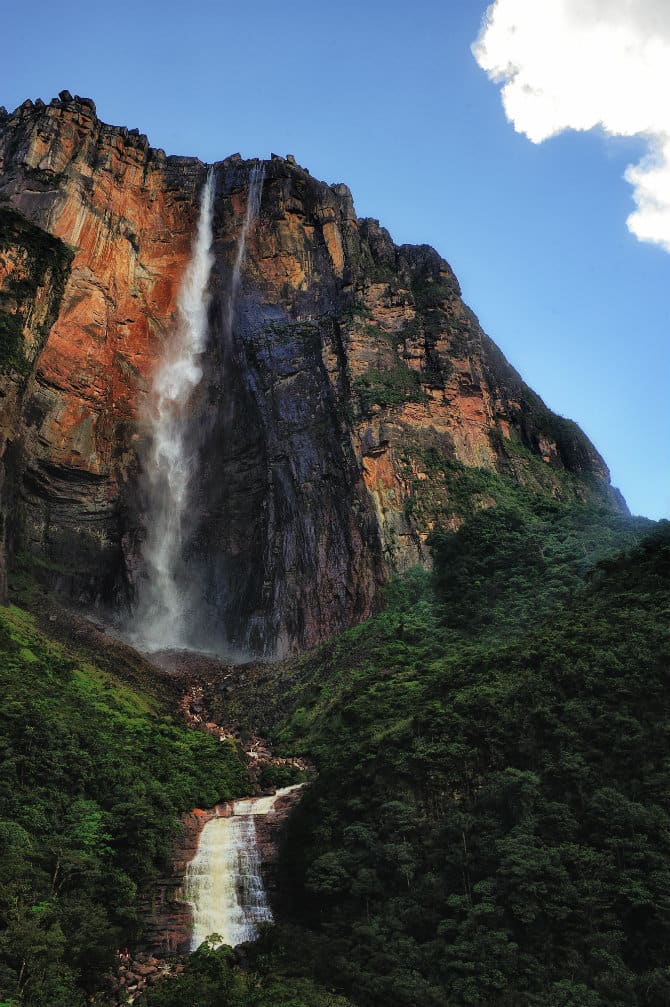 Without a doubt the most famous waterfall in the world, Niagara attracts millions of visitors each year.

Niagara sits on the border between the United States and Canada and is fueled by the enormous Great Lakes basin. With a combined crest width of over 3400 feet, it is the largest waterfall in North America by with as well as volume, and even with all the tourists and unmistakable mark humans have left on the area, Niagara’s roar is still one of the most impressive things you can experience on the continent. 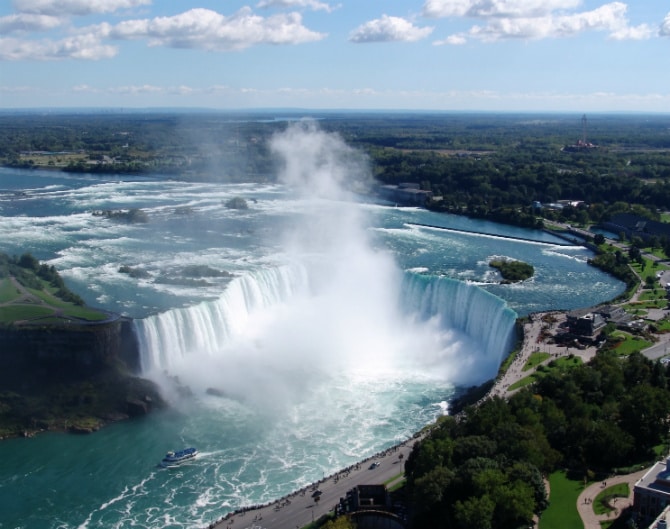 This grandiose waterfall was named after Queen Victoria by the legendary explorer David Livingstone, but however imperial it may be, its indigenous name sounds far more fitting – Mosi-oa-Tunya, meaning the Smoke that Thunders.

Victoria Falls is basically the mile-wide Zambezi River falling into a 350-foot chasm and then zig-zagging its way eastward, though in markedly less impressive fashion. The sight is as impressive to the eyes as it is to the years, with thick white water vapor obscuring the bottom of the gorge, adding an air of majesty and mystery to the place. 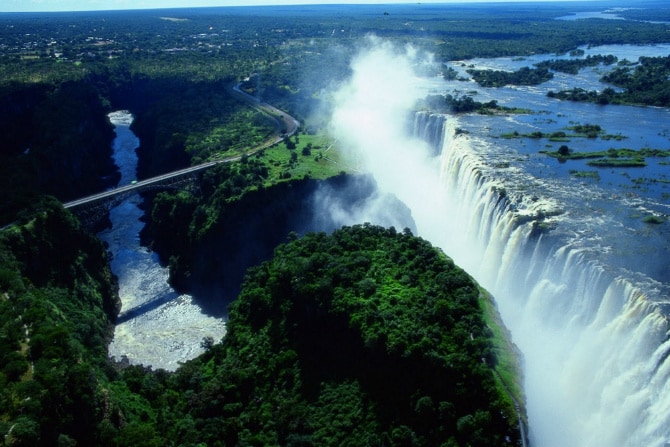 Located, as many other impressive waterfalls seem to be, on the border between two countries (in this case, between Argentina and Brazil), Cataratas del Iguazu is without a doubt the most impressive such sight in the world. Its name literally means “Big Water”, and it is probably the only thing you will be able to articulate after you’ve recovered your jaw from the ground upon seeing this amazing feat of nature.

While its volume does decrease dramatically during the dry parts of the year, Iquazu turns into a real giant during the rainy season: with a total width of over one and a half miles and a largest drop of almost 270 feet, Iguazu is the epitome of awesome – and fully deserves its top spot on our list. 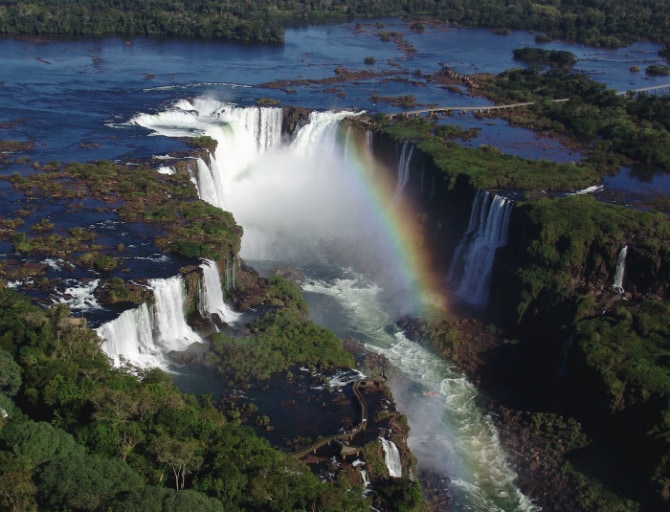