The famous industrialist Ferruccio Elio Arturo Lamborghini had modest beginnings in a family of grape farmers from the Renazzo di Cento Township, Italy and ever since he was a small child he was more interested in the way the farming machinery worked instead of focusing on the farming life. Born on April 28th 1916, Ferruccio started learning about engines at an early age by helping to repair his father’s tractor. 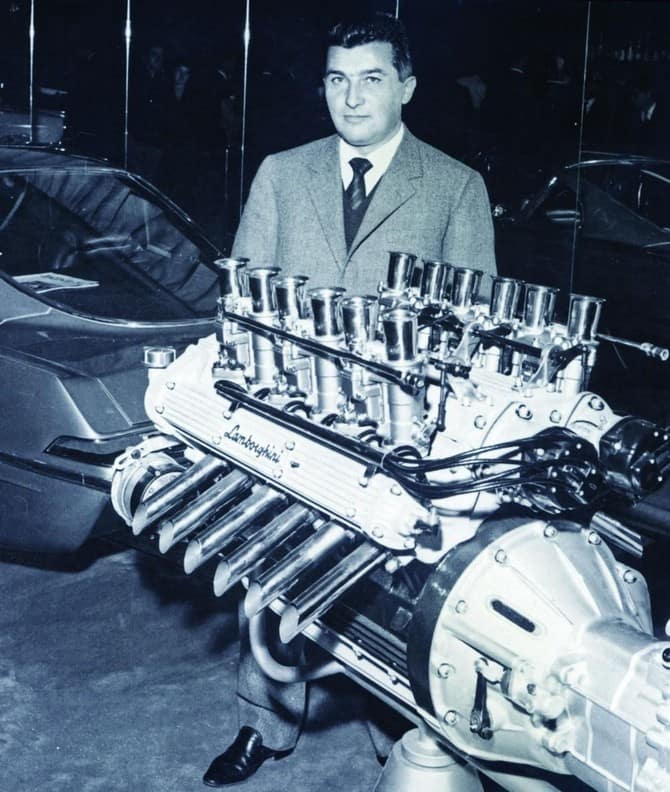 The mechanical orientation led him to the Fratelli Taddia technical institute and in 1940 the Italian Royal Air Force drafted him as a mechanic to serve as the supervisor of the vehicle maintenance unit in Rhodes Island. This was one of the most difficult periods of his life after he was taken prisoner and couldn’t return home for a whole year, but the misfortune didn’t end here, since after marrying his wife Clelia Monti in 1947 she died while giving birth to their first son, Antonio. 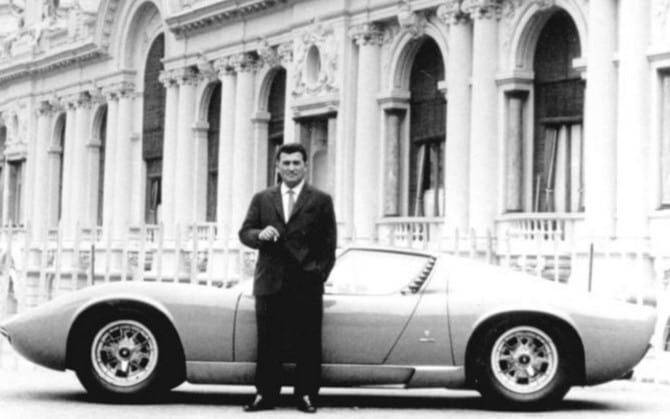 After the end of the World War II he opened a small garage in Pieve di Cento and when he had the time he would tinker with an old Fiat Topolino to tune it and fit his own Testa d’Oro 750 with which he competed in the Mille Miglia competition of 1948. The competition ended abruptly for him with a stop in the side of an inn and through its wall, leading to him give up interest on motor racing for good. 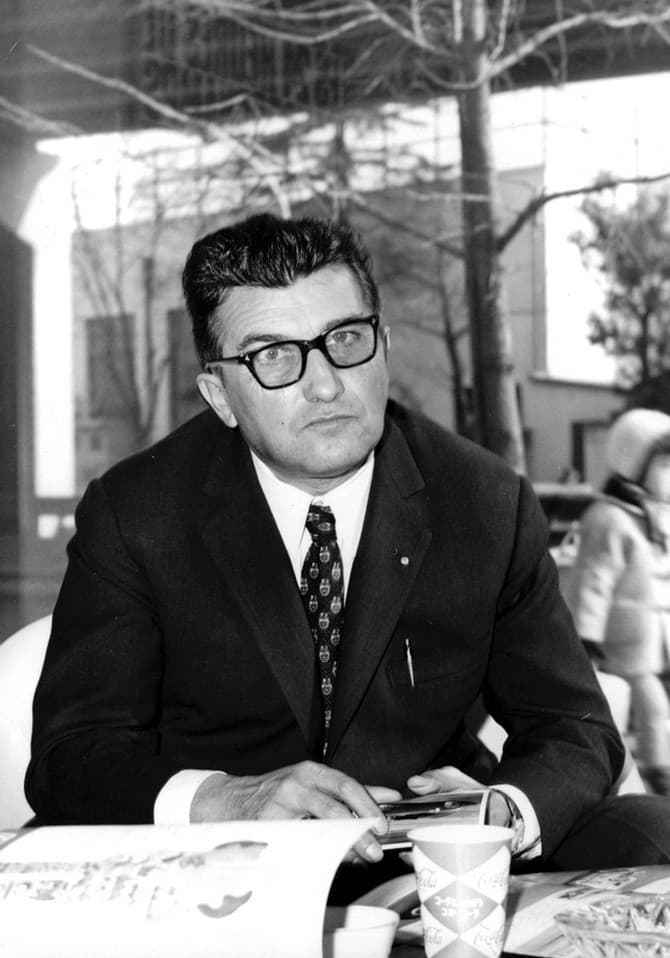 Business was thriving and he bought automobiles he considered better such as Alfa Romeo 1900 Sprint or Lancia Aurelia B20 and this is the time when he decided to run seven cars at the same time so that he could use a different one each day of the week. He quickly became bored with his cars and always wanted to try out new ones, mostly Italian automobiles but some foreign ones as well. 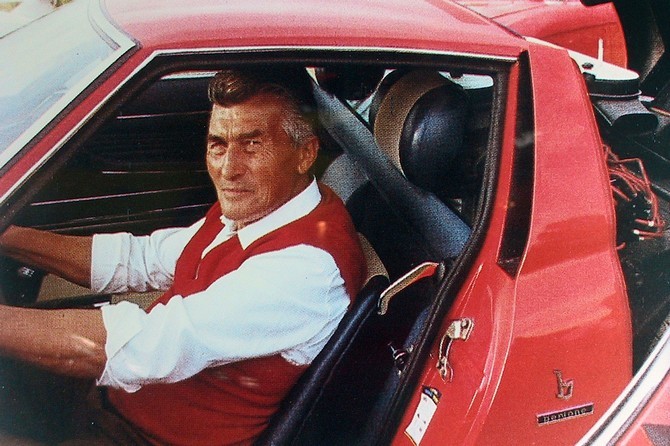 Since his knowledge of engineering was now extensive he was very picky and careful about his choices, finding out flaws in even the most prestigious models and being renowned for saying he admires Adolfo Orsi but doesn’t care too much for the Maserati card. The Ferrari 250GT received criticism from him as well for the bad interior layout, clutch problems and excessive noise but when he wanted to communicate these difficulties to Enzo Ferrari he was quickly dismissed.

The qualities of the Ferrari 250GT (he considered this car the best apart from the Mercedes 300SL) led him to start improving the car and this is the moment when he began to think about starting his own automobile manufacturing venture. His aim was to create the perfect touring car which would bring together the ride quality of the Ferrari with improved tractability and the tractors he was already building were a great start for this since Ferrari used the same clutch as the Lamborghini tractors.

The venture began with a brand new factory built in one of the industrial areas of Sant’Agata where he started planning for the best V12 Gran Turismo automobile. He chose the symbol of a bull since bullfighting was one of his fascinations ever since he visited the ranch of Don Eduardo Miura in Seville in 1962. The Miura animals were so lasting on his mind that he took their image for the company and also named his favorite car after them. 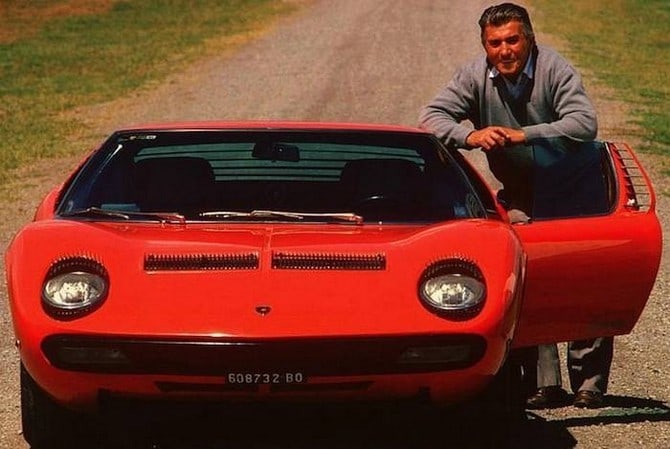 The first cars he produced had alphanumeric designations but he quickly gave the latter ones catchier names taken from his favorite passion, starting with the Miura model and continuing with Islero, the bull that killed the famous bullfighter Manolete, continuing with Espada, meaning sword in Spanish, and Jarama which is a historic bullfighting region of Spain. The Urraco followed which is a bull breed and then he took a break from this line with the Countach model that takes its name from the Piedmontese word contacc. 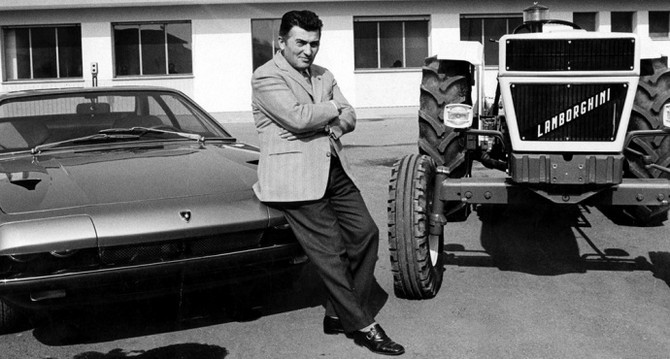 There were several economical problems with the tractor factory and Italy began to go through some economical unrest that led to problems for Ferruccio, determining him to sell his interest in his companies and in 1974 he retired in the La Fiorita estate in Castiglione del Lago to return to his roots as a farmer and start growing his own brand of wine called “The Blood of the Miura”. Over 800,000 bottles are being produced each year and the estate is also the host of a small private museum of Lamborghini automobiles owned by Ferruccio with his favorite model, the Miura, standing at a place of honor.

The marriage to Clelia Monti wasn’t the only one, since she died when he was still at a young age he remarried to Annita Borgatti but the union didn’t last long and the third time was the charm when Maria-Teresa Cane gave birth to his daughter Patrizia. The son Antonio (Tonino) didn’t follow in his father’s footsteps but instead focused on a fashion career and designed clothes with the Lamborghini brand, moving to Japan and starting a chain of stores there.

The company was sold to Georges-Henri Rossetti and Rene Leimer until 1978 when it went bankrupt and was later placed in the receivership of Jean-Claude and Patrick Mimran in 1980 who invested in the extension of the company to produce sports cars and off-road vehicles. In 1987 the company was sold to the Chrysler Corporation who discontinued the Jalpa and LM002 off road vehicle fabrication for the Diablo model that still had Ferruccio involved in its beginnings. The name comes from a bull breed again, which was famous for a historic battle against El Chirocco held in Madrid in 1869. 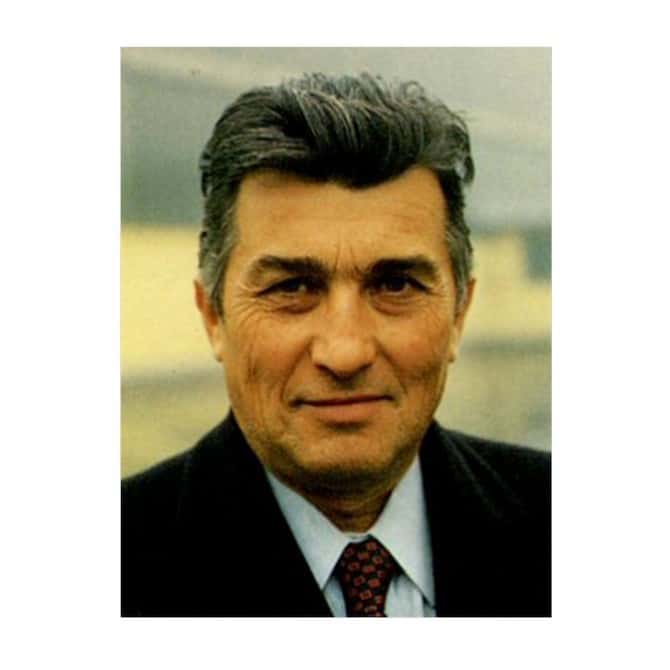 At the age of 76 Ferruccio Lamborghini died on the date of February 20th in the Silvestrini Hospital of Perugia due to a heart attack and was buried at the Monumental Cemetery of the Certosa di Bologna monastery.

His son Tonino brought a tribute to the great man by naming his firstborn Ferruccio Jr. and two years after the death of his father he created an arch with the aid of the architect Diversi in Imola. The arch is a venue where all the achievements made in the life of Ferruccio Lamborghini have been stored and there is also a Centro Studi e Ricerche Ferruccio Lamborghini opened by him in 2001 which functions as a museum. The companies continue to operate to this day and the winery is being run by his daughter Patrizia, so his legacy carries on.