Mozart’s Last Castle – Schloss Stuppach – Can be Your Future Home

Proudly sitting at the foot of the Semmering, next to a small mountain town called Gloggnitz in Lower Austria, this magnificent four-storey castle might not be exactly the place where Mozart lived, but it has a strong connection with one of the world’s greatest composers of all time – that’s why it’s also called “Mozart’s Last Castle”.

Schloss Stuppach, as this castle is actually named, has been the former residence of the Count Franz von Walsegg, who commissioned Wolfgang Amadeus Mozart back in 1791 to write a special Requiem for his late wife. The result was one of the Mozart’s best-known and most popular works, the Requiem, a choral masterpiece shrouded in mystery, that was kept in this castle for a very long time.

Today, the original score can be admired in Austria’s National Library (Österreichische Nationalbibliothek), where it’s considered the most valuable exhibit from the music collection. Now you see why Schloss Stuppach is also called “Mozart’s Last Castle”?

The first mention of this castle dates back to the year 1130, but only in the 16th and 17th century, after it was completely redesigned it became pretty popular, serving as a high-caliber international business club, with numerous events, with literary and musical highlights, and famous guests like Napoleon Bonaparte, Emperor Franz I of Lorraine, Pope Pius VI, Franz Schubert and of course, W.A. Mozart, among many others.

Even today, Schloss Stuppach is often visited by princes, princesses and other royalty members, statesmen and some of the world’s wealthiest people. The castle itself spreads over 26,909 Sq Ft. (just under 2,500 m²), with 50 bedrooms, numerous bathrooms, as well as a freestanding west wing (formerly a watermill) that could be converted as you wish.

Special attractions include a baroque main facade facing south, a charming courtyard, several terraces, an 18m high round tower and a baroque garden with century-old trees.

Inside this spectacular four-storey chateau you’ll find all the facilities you might want for a high-end business club, including a Splendid Bar, Lager and Kitchinette, an Atelier and many other special rooms. These are all in the basement floor, where you can also find historic rooms such as the sacristy, a small chapel, a dungeon and a Jardinière room.

But the first floor is even more incredible, boasting glamorous salons such as Salon Mozart or Salon Graf Walsegg, a wonderful fireplace hall, a wine shop and the Schlossshop, a cinema and also a professional catering kitchen. Upstairs you will find several other lounges, a private living area, a library, several guest suites and even a mini spa, that’s still a work in progress.

The four-storey chateau also comes with a convertible attic that could be turned into luxury apartments, separable offices or anything else you might want to. The possibilities are endless and as long you’re listening to Mozart’s greatest works, you will be totally inspired to turn this castle to its former glory. The price is available only upon request.

Tags:
Previous Article
The Top 10 Most Impressive Outdoor Ice Rinks In The World
Next Article
Ducasse sur Seine is a Floating Restaurant Like no Other 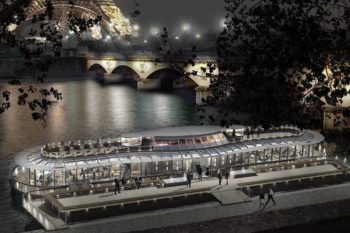 Ducasse sur Seine is a Floating Restaurant Like no Other